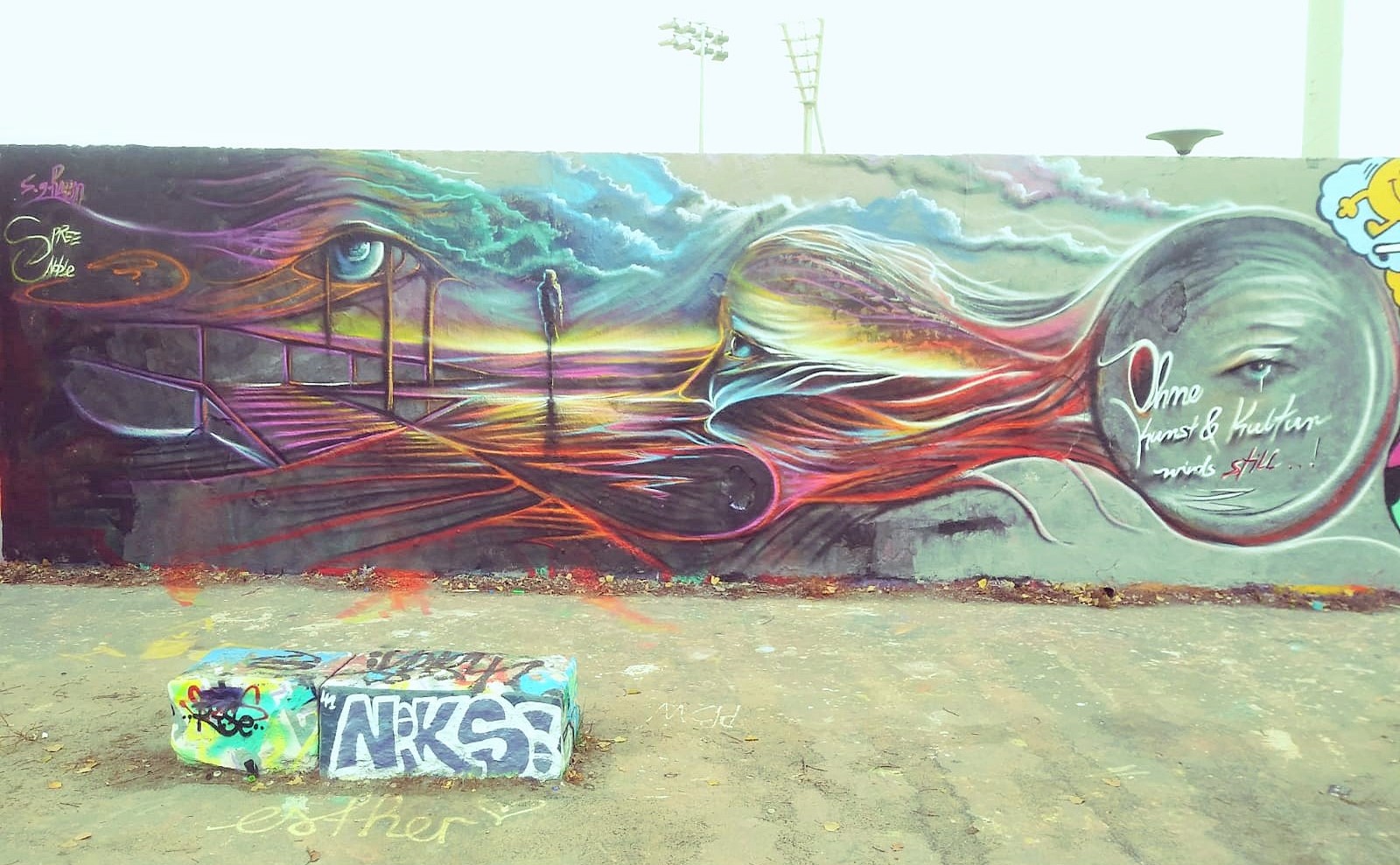 The Graffiti Zone at the Berlin Mauerpark is an open spray area on the former east-west border in the district Prenzlauer Berg. The spot is very busy and fantastic pieces get painted here every day. They are often only visible for a short time because continously new artworks appear on top of the older ones. We have therefore considered a categorization by creators with chronological updates for the archive. Check out the artist gallery with meanwhile already 280 artists and more than 4000 photos.

The history of legalization

GRAFFITI LOBBY BERLIN: Dear graffiti artists, We are committed to the legalization of graffiti walls. This takes a long breath. How long this can be describes the look back at the interior wall at the F.-L.-Jahn-Stadion in Mauerpark, Berlin’s world-famous Hall of Fame. On September 20th, 2012, I went to the citizens’ office of the Pankow District Councilor Zürn-Kasztantowicz (SPD). She wondered how we got on with her. I told her about my laborious search for a contact person and the reference to her office hours in a local newspaper. I explained to her the unsatisfactory situation of not being able to legally spray at the Hall of Fame in Mauerpark. Also that additional wall surfaces are required. Why is the wall in Mauerpark that has been in use for years not finally legalized?

She promised to find the right contact person, maybe the district mayor? Unfortunately that came to nothing. The idea of ​​founding the “Graffiti Lobby” arose from the idea of ​​finding colleagues who were committed to the legalization of walls. Artists, social workers, teachers, entrepreneurs from the cultural industry and others gradually joined them. I tried to get in touch with the district mayor Köhne (SPD) again. The first conversation with him and later with the Pankow building councilor Kirchner (Bü90 / Grüne) took place on 9th January 2013. The discussions were constructive. With the result that the art in the Mauerpark was now “tolerated”. Mr. Koehne issued a letter of recommendation to the lobby. Mr. Kirchner tried to contact the owners of several walls (from the wall catalog of the “Graffiti Lobby” for the Pankow district), but without any result. After all, there was now an exchange with Mr. Puell from “Friends of the Mauerpark e.V.”. In 2014, intensive scrutiny led to the Pankow district office distributing a flyer that described the wall art in the Mauerpark as “tolerated”. A first stage success. In the same year, our Graffiti Congress took place in cooperation with the Friedrich-Ebert-Stiftung, which addressed all areas associated with art out of the can. Cultural education, civil and criminal law, urban development and much more. 3 years passed.

“Tolerated” is still not “legal”. In 2017 there was therefore another meeting with local politicians. But only Mr. Schirmer (Die Linke) followed up the announcements with deeds. The BVV application by the “left” to legalize wall areas and explicitly also the interior wall in the Mauerpark was finally accepted. But now new hurdles came to light. The monument protection authority had to be involved, and the waste disposal of the used spray cans had to be regulated. In the late summer of 2019, the containers were finally up and the monument protection authorities gave their OK. Seven years of commitment to a piece of the wall that has been used as the Hall of Fame since the Wall came down 30 years ago. There was only a brief statement in a press release: “Spraying graffiti is allowed on the ‘Hinterlandmauer’ on the side facing the park. The spray cans must be disposed of properly. ”  –  Jurij Paderin – Graffiti Lobby Berlin – 2020

>>> Check out as well the Interview with the Graffiti Lobby <<<