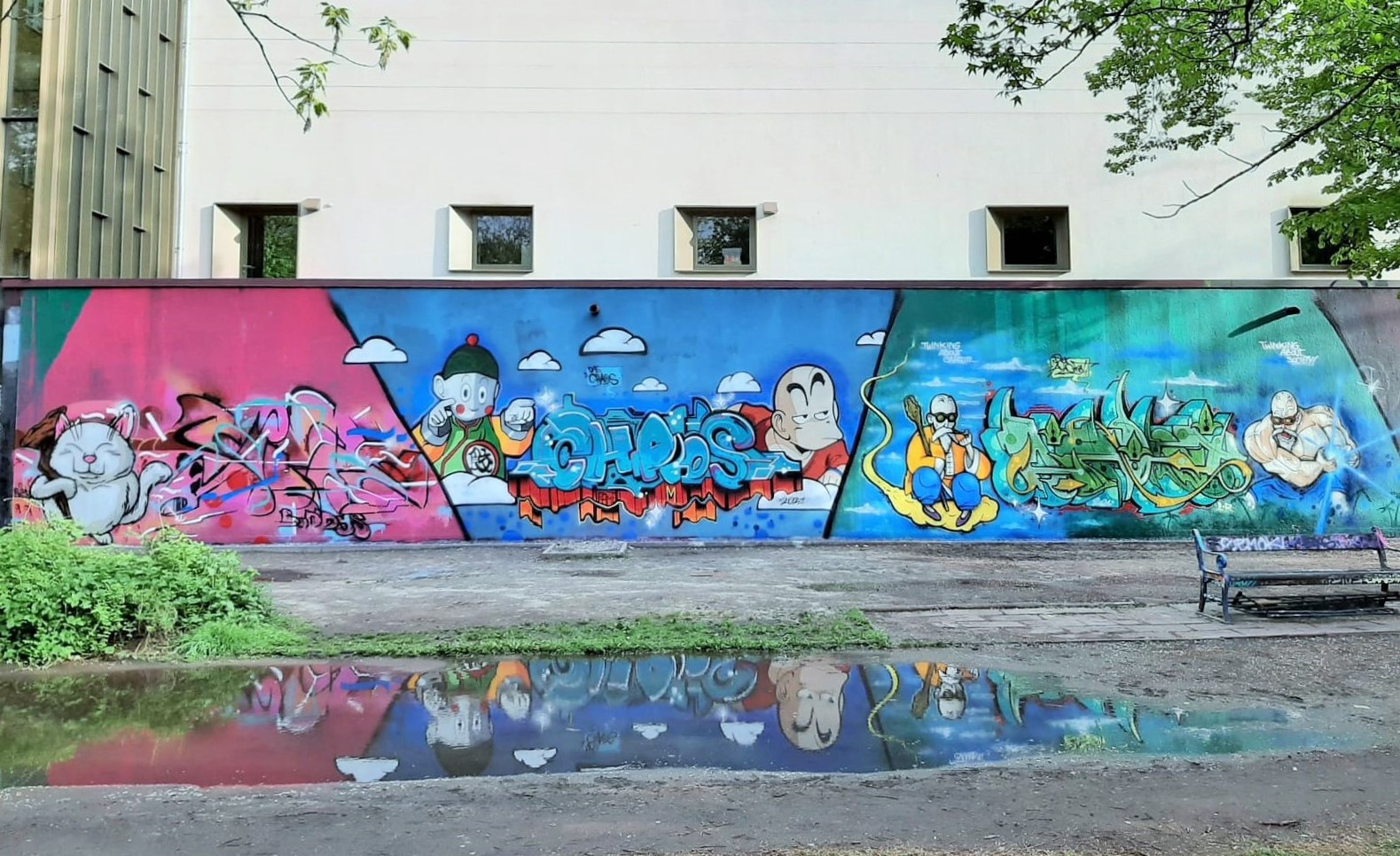 smoThe “Theater an der Parkaue”, also called “Junges Staatstheater Berlin” in the Lichtenberg district, is one of the largest state theatres for young audiences in Germany. “Who owns the stage and what takes place here?” – With this question, the theater opened its stage in 2020 and founded the Parkaue Community Theater. The Parkaue became the host for the whole city, a place and springboard for creative encounters, exchange and togetherness. People of all ages could experiment, try and meet each other in artistic formats free of charge. 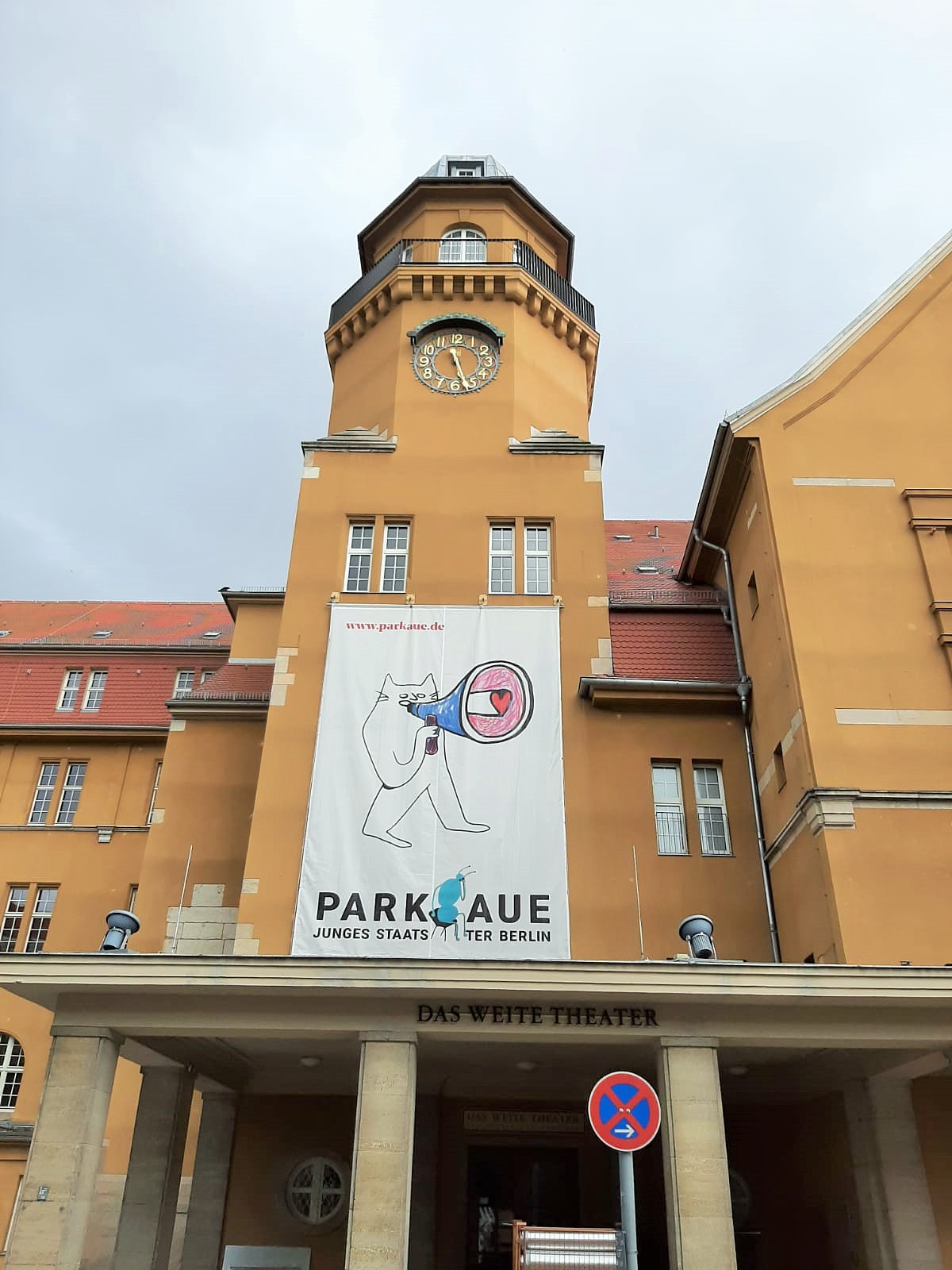 Originally conceived as a large hidden object in the theater on site, the rehearsals were moved to the digital room in mid-October due to the pandemic. For several months, smaller and larger people from Lichtenberg and the whole city romped about with Berlin artists and their hosts from the Education & Community department in digital rehearsal rooms. According to the principle “Everything is possible and the result is open”, all threads of the various formats were gradually brought together and a joint celebratory conclusion was worked on: The Digital Community Festival!  –  Parkaue Community 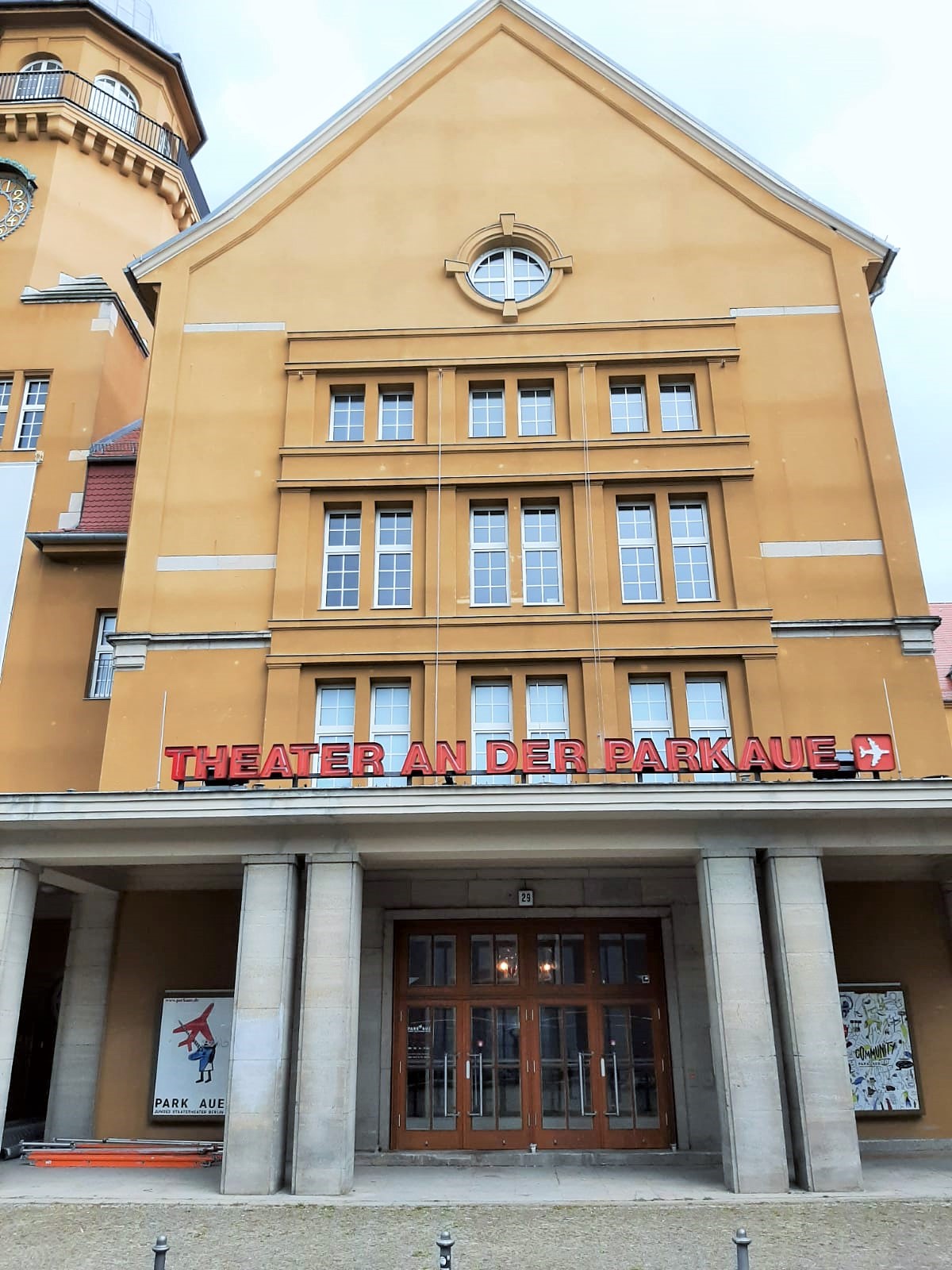 There is great graffiti art on the walls of the building and the property, right next to it is the youth center “Linse” where you can find as well great art. Here on the collection page you can find all the works sorted according to the respective artists around the building complex.

The history of legalization

GRAFFITI LOBBY BERLIN: Dear graffiti artists, After a two-year process, the Graffiti-Lobby Berlin and the non-profit association Urban Art e.V. were finally able to inaugurate a new hall of fame in the Parkaue next to the Theater an der Parkaue and the lens youth club in Berlin-Lichtenberg. The wall to the park is about 3.5 m high and about 30 m long. The outer wall of the “Theater an der Parkaue”, which is managed by the public real estate management company BIM (Berliner Immobilienmanagement GmbH), is initially temporary, the contract runs until autumn 2019. On the right-hand side of the wall, the youth club “Linse” regularly organizes graffiti Workshops. The dialogue with BIM began in 2017. The contact took place after a round table in the Senate Department for Culture and Europe Culture Department with some urban art activists from Berlin (“Kreis der urbanen Szene” = “Collective of the urban scene”). Only two years later, after many meetings, the contract between BIM and Urban Art e.V. was finally signed. But long before that, in 2014, the Graffiti Lobby Berlin organized a graffiti congress with a request in the Berlin House of Representatives for more legal space in the city. This was an appeal to politicians that was made five years ago. And since then the scene of street art artists and writers has grown and painting on walls has become more and more popular. More authorized walls are needed so that artists can paint over a large area and exchange ideas, and also to meet an audience. Because painting in public is also a wonderful tool for social contacts. 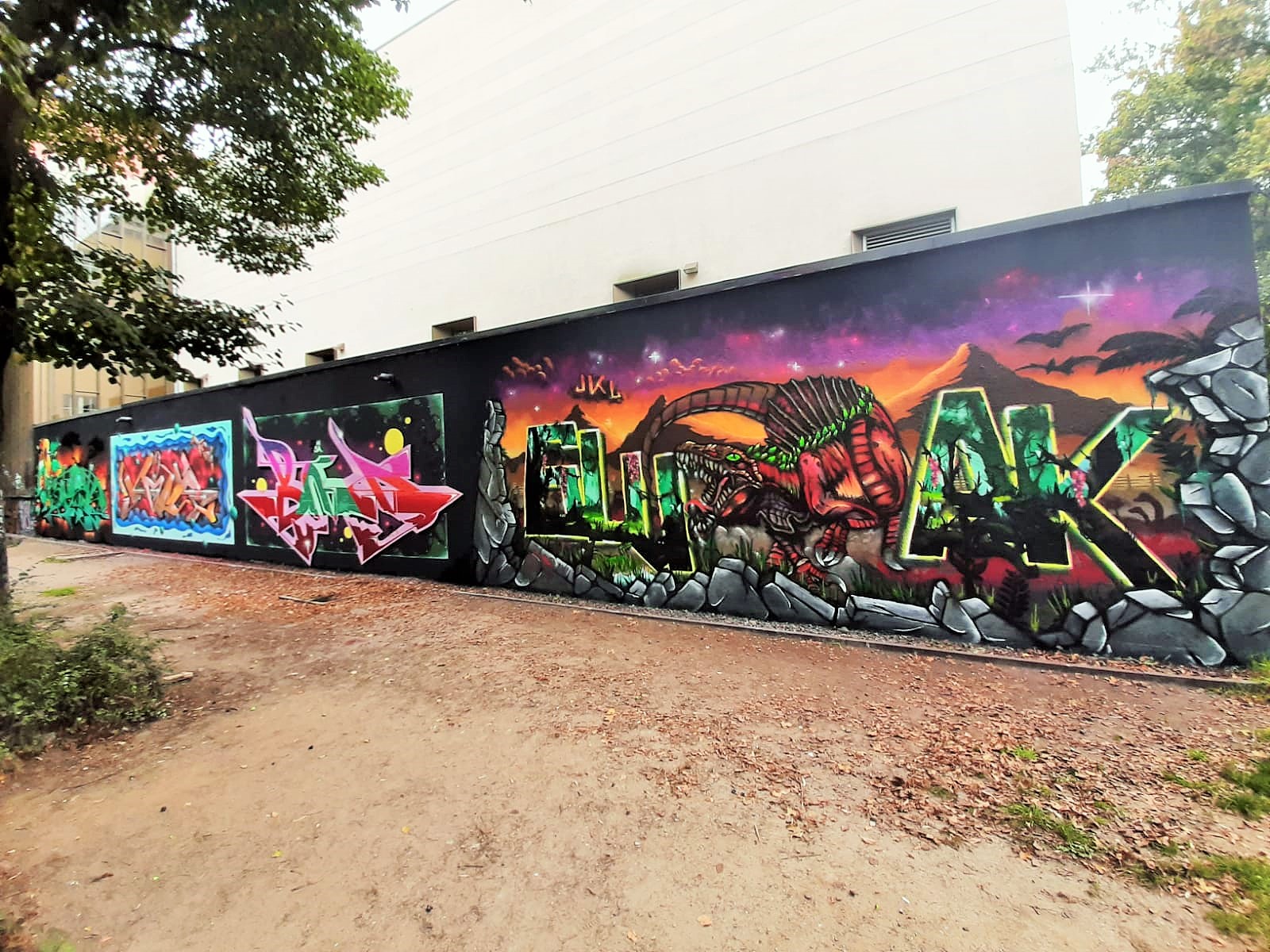 After the challenge of getting this wall approved for painting, the next challenge will be the proper functioning of this new hall. The Graffiti Lobby Berlin reminds users with a sign on the wall to treat each other respectfully and to keep the environment clean, i.e. not to leave any spray cans and rubbish there. A garbage can will be ready by the lens for the cans. Other smaller cities in Germany, reports the Graffiti Lobby Berlin, such as Leipzig, have more halls of fame than Berlin. And there they organized special rubbish bins, especially for hazardous waste such as spray cans, which are known to be harmful to the environment. One of these garbage bins costs around € 1000 and several in Leipzig were financed through a prevention program. It is a pity that the city of Berlin has not yet invested in special garbage bins for this hazardous waste next to its halls of fame. The well-known Hall of Fame in Mauerpark, on a piece of the former Berlin Wall, is just normal, overfilled wastebasket that is never available. And here a lot of tourists come to spray. Most female artists take their rubbish with them afterwards, but some supposedly still need to be reminded to take responsibility for the environment and their own rubbish. Hopefully the little sign of the Graffiti Lobby Berlin on the new Hall of Fame will remind you of this and the location can stay clean and live longer than planned. In this amazingly quiet green environment, the Hall on the Parkaue definitely seems to be the perfect spot for chill-outs and jams in summer. This new acquisition is the result of the longstanding commitment of the Graffiti Lobby Berlin, which, together with Urban Art e.V. (Urban Art Week), is eying other walls in Berlin that need to be legalized.  –  Katia Hermann – Graffiti Lobby Berlin – 13.05.2019

>>> Check out as well the Interview with the Graffiti Lobby <<< 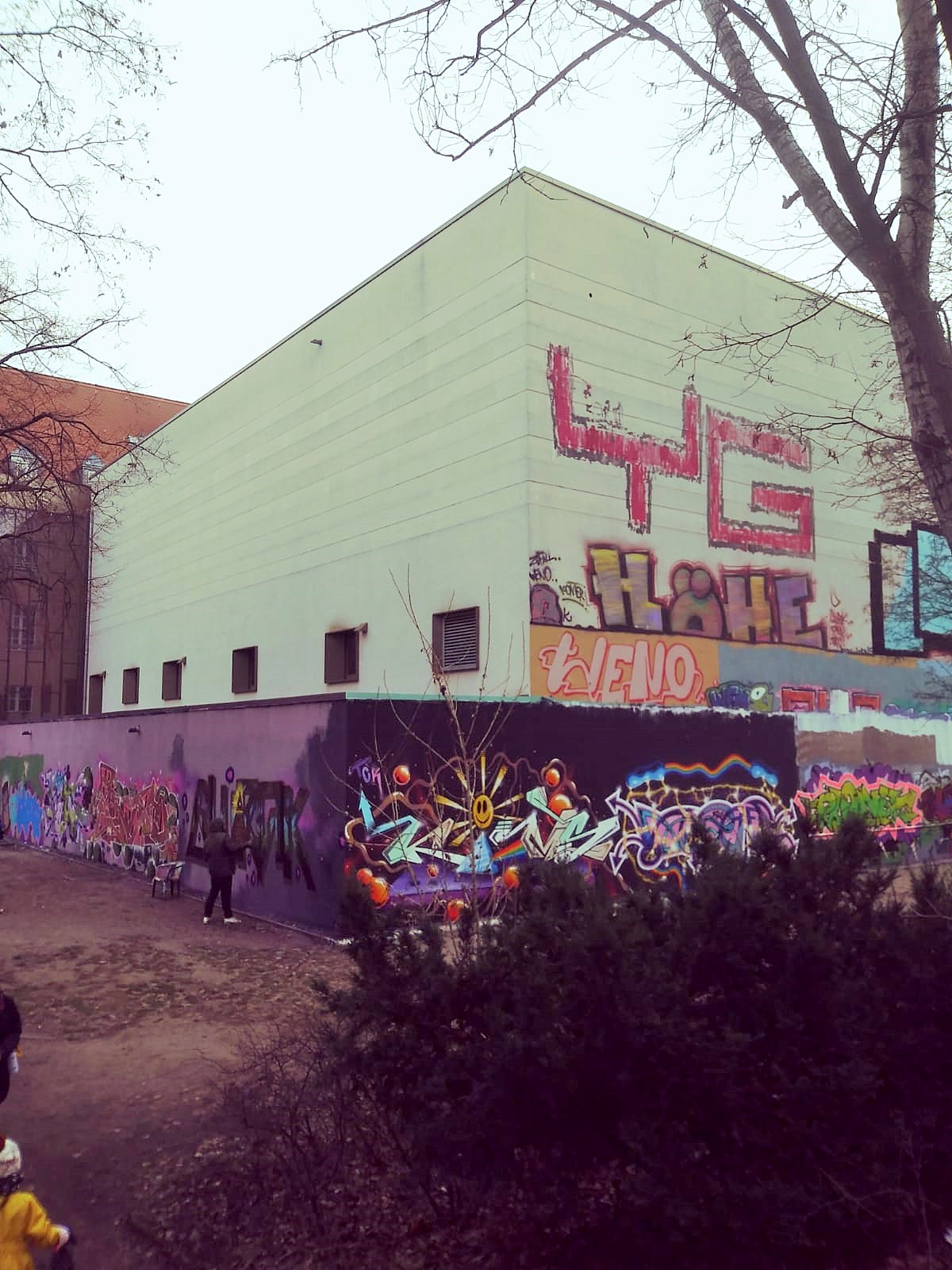