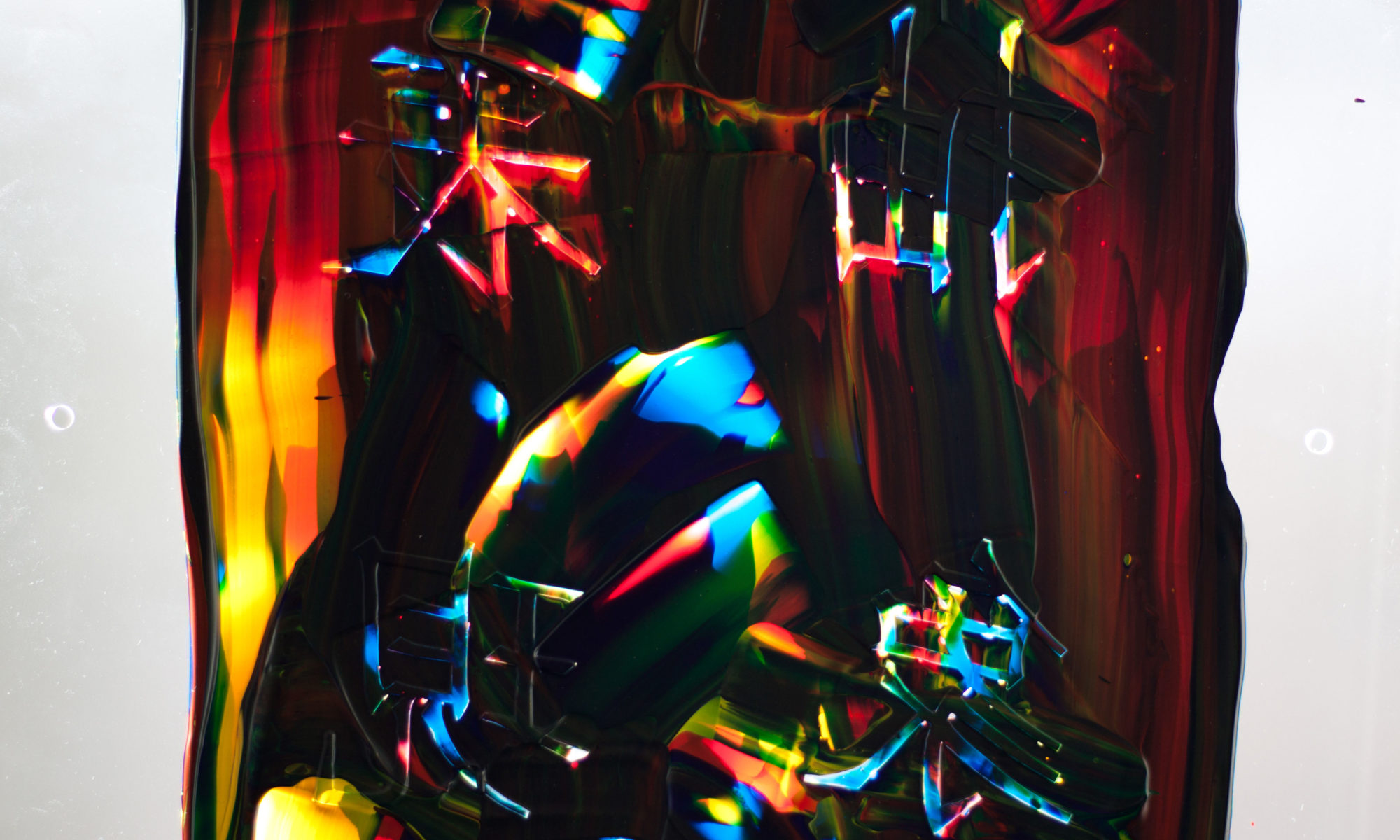 Graphics, shapes and colors represent boundaries and the infinite. The works of the postmodern painter Serkan Goeren from Frankfurt deal with the demolition of their own framework. His art could be described as a philosophical art, the paintings and his writings are an expression of a more comprehensive theory, with which the artist has been engaged since the study time.

Postmodern because he criticizes modernism, but also makes the claim to his work to include the modernism and work through this, in order to criticize him first. The central point is the doctrine of art critic Clement Greenberg. For Goeren, his works are primarily concerned with the dissolution of boundaries and the intermingling of clearly separated forms on an abstract level. Not so easy to visualize something like that.

An idea came to the painter at first because he had simply renounced the canvas. The paint was almost peeled off and hung like a skin after application. The material needed to be wet enough to peel it off, but also strong enough to hold it together. However, this method proved too problematic and too time consuming. Meanwhile, Serkan uses acrylic sheets, which also have a good effect.

In an interview, the artist tells us about his post-modern work and criticism of modernism. Some passages of the conversation are also written below. The audio interview is in German.

One field of your work is philosophy, the other field is art. Can you say you are doing philosophical art?

Yes, perhaps. So the whole thing was born out of a theory that I spent a lot of time with during my studies, and that was the modernism of Clement Greenberg and his lyrics. I’ll give it a try. Greenberg was concerned that in modernity the genre boundaries are respected. Painting thus remains within painting and then tries to discuss the essence of this genre, that is, of painting, in artworks. And the sculpture remains in the sculpture to say something about the sculpture. But at some point in the course of his theorization he introduced concepts that were no longer reductionist but wanted to name something like quality or something similar. And then I started to deal with it and then have the saying of Clement Greenberg, namely, “to fight through modernism”, perhaps then the artists, who then came then, so from the postmodernism, better to understand. One statement here is that you just can not just negate, but just have to fight through modernism, to show what modernism is failing. I took that as a programmatic point in my artworks. I said: I’m going to work reductionistically and show that it amounts to anti-reductionism. That’s why I started to dispense with the canvas in the classical sense and have worked on acrylic plates, on acrylic glass to make sculptures of my painting in the foreground. At the beginning, I even had to do without the acrylic plate and simply peeled off the paint after drying to bring out this sculptural element even more. It was like a skin. Like a very sticky skin. And that was also very difficult, because the drying phase was not over yet and when peeling it could happen that the color then stuck. You had to pull that off very slowly. That’s why I said then, I will now work on acrylic plates to dissolve this process also the hanging. And since then I work on these plates.

On the one hand you give rules and structures in your pictures, but at the same time you dissolve them in the picture.

Yes. So also content, just to show, so you can like to give an area or a border or a frame within which you want to operate. But at some point it will just go beyond this framework due to the logic of this art. That’s important to me, too. And in doing so also somehow showing people such an approach of freedom and how freedom always paves the way. That is also very important to me. Maybe this idea is also to ignore the genre boundaries and not to keep them, perhaps that is also important to me because of my migration background. Since I always had to mediate between two cultures. And then I also want to mediate between these genre boundaries and to show that modernism was in a certain way wrong and that postmodernism is the legitimate successor to modernism. At the same time, however, one has to say in retrospect that postmodernism can not simply negate modernism, but must really work through it and show what the Modernist is about postmodernism.

This is my logo. At some point I thought, I would like to see my logo not only static, but in a certain way always have such a chaotic moment in it and it then fits again and then it is just sorted again. Then the logo is also as it is actually pictured back there. (Red .: So a chaotic order that finds and dissolves again?). You could say that. I actually find conflicting terms that occur in a sentence, not so bad. 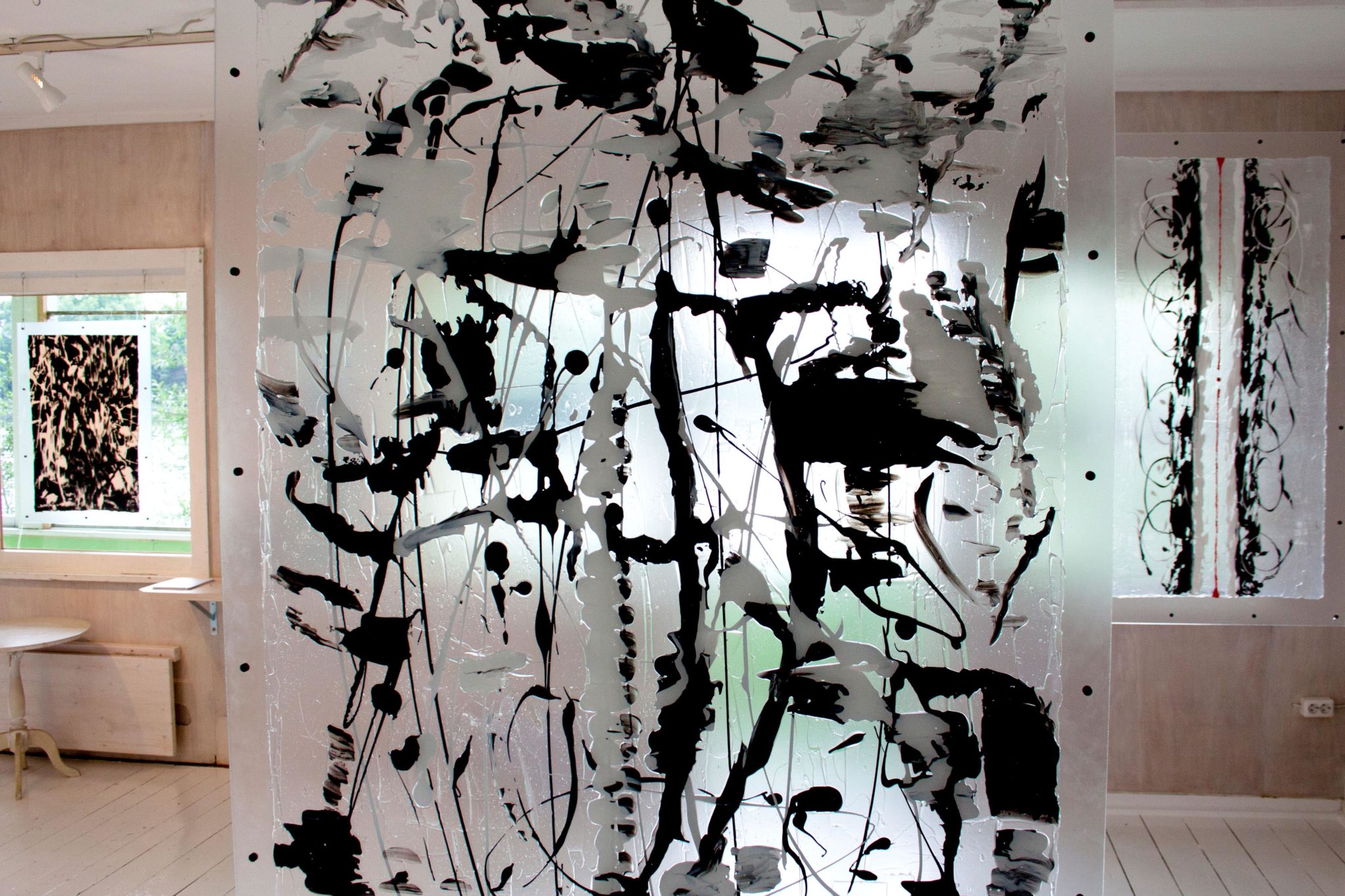 You also write on your page in German and English, so bilingual.

It probably also comes from my studies of art history and philosophy, that in addition to the works of art that I made, I also write an artist theory because I have a bigger approach to the whole thing. It’s always important to me that there’s always a theory involved.

With an additional explanation, you also learn what you have in mind and receive theoretical information that goes beyond the picture.

Yes, even if I now write about the pictures or the works of art on the theoretical level, even there it is only one form of expression of what I really want. In that sense, I see no difference in a certain way. It is just another form of expression to get something overboard perhaps also linguistically under control or to get painterly under control and thereby show again and again that there will always be a residuum, so a rest, where it maybe goes into the magic.

THE ARTIST ABOUT HIMSELF ON HIS WEBSITE: The basics of my artworks can be found in the critical-theoretical and -practical analysis of differing artists like Marcel Duchamps and Barnett Newman – to mention the most important for me – and the art theorist Clement Greenberg. I´m interested (in general, but also in arts) in overcoming artificial boundaries for the sake of what all humans have in common. This is owed to my experience as a child of immigrants. Differences are subtleties of beings whose differences only can be appreciated if you understand that there are a lot of commonalities shared. Referred to the arts, it also means that I´m only interested in the media-specifity insofar as to overcome its specifity. I graduated in Philosophy, History of Arts and Psychoanalysis (M.A.) and Business Administration (B.A.).

GOERENS WRITINGS „THE DARK SIDE OF THE PAINTING“:  The transfigured/transfiguring is historically oblivious and is lost in the present. I bring up a historical awareness in my works of art, which the recipient brings to her/his mind. I show the recipient the historicity of the present and the present of the historicity. It is the dark side of the painting that I want to shine a light. I changed the perspective only to notice that I changed painting over to sculpture. And I wondered over the fact that the dark side of the painting is the recipient´s reflection about whether you can only occupy a single perspective or multiple perspectives. I went beyond the scope while I tried to clarify a simple aspect. A simple assumption, that is the abandonment of the canvas, led to a complexity, in which the recipient threatens to lose oneself. The attempt to see the artworks as a whole is difficult. I force the handling of the artworks by walking around them on the recipient to show the unity of the works splitting into fragmented impressions. The recipient only sees a part of the whole. The paintings are looked at like sculptures. That means, I challenge the recipient, to reflect on her/his viewing habits. And as a consequence to understand in general, what it means if a given is no given anymore. It is this kind of look at the world, which sees the unique in the common again. A look at the world, in which an unalienable and unimpeachable value is inherent in every single human being. 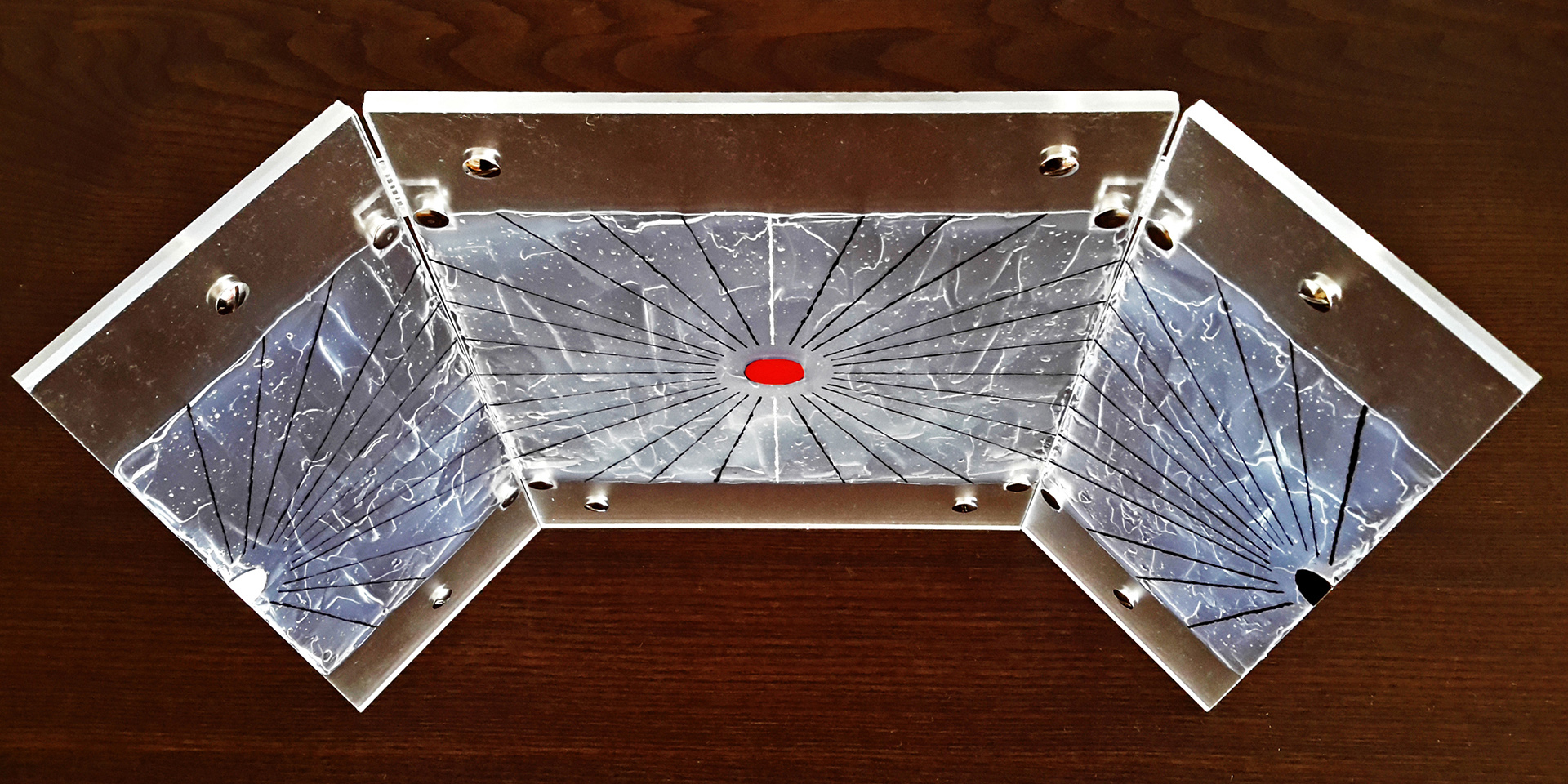 The next exhibition of Serkan Goeren will take place from 9 to 21 November in YokYok2 at Fahrgasse 21 in Frankfurt am Main, Germany. 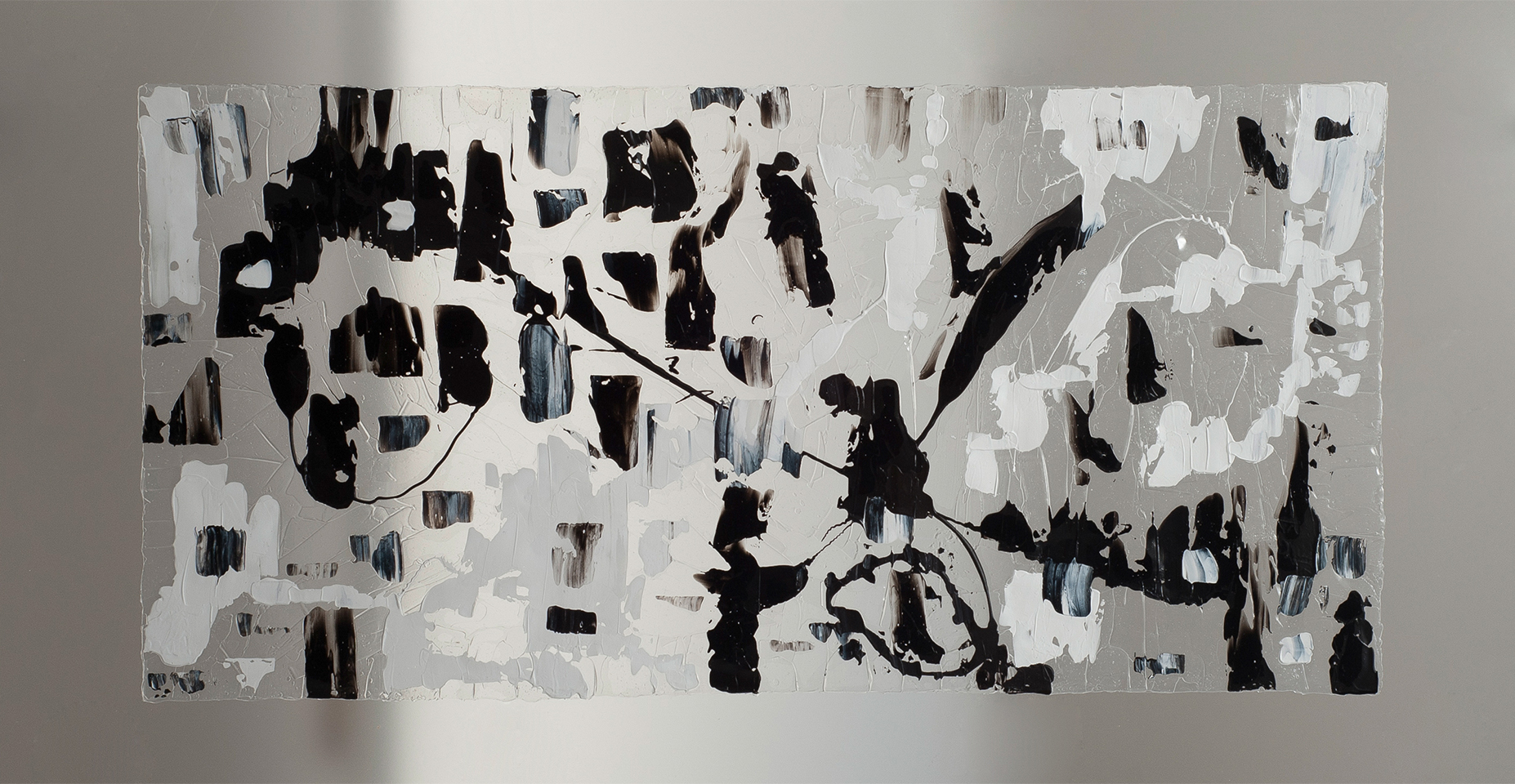