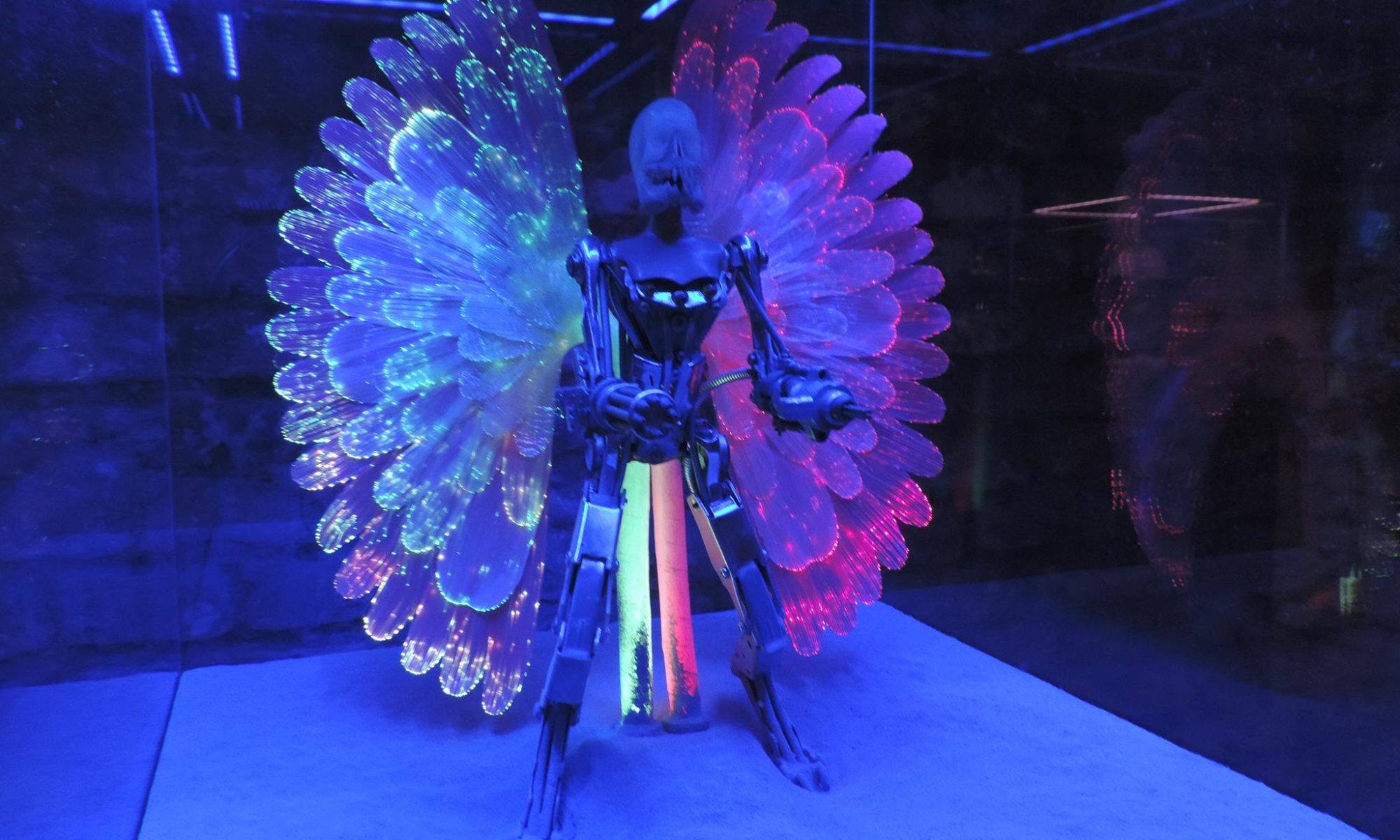 Cyborg-Barbies have some visitors called his artworks at the Blooom, a quite nice Art Fair in Cologne. The name Cyborg-Barbies fits very well. They are part of a series of apocalyptic mutant beings called “Reconformed Creatures”. In fact, they consist of parts which he once took from other objects and equipment. It is important to say that these parts of the artworks come entirely from the garbage. Weingärtner has been collecting all the scrap, micro-inventory and other bits and pieces for over 20 years, which others throw away or can be found on the street. He dissects it, categorizes the pieces categorically and builds from the new assortment, in turn, crazy characters and fantastic creatures. Unfortunately, he was not there when we visited the gallery, but we have a telephone interview for you, in which he talks about his passion for collecting and the creative reconstruction.

The podcast is in German but in the following you can read the written down conversation translated into English: 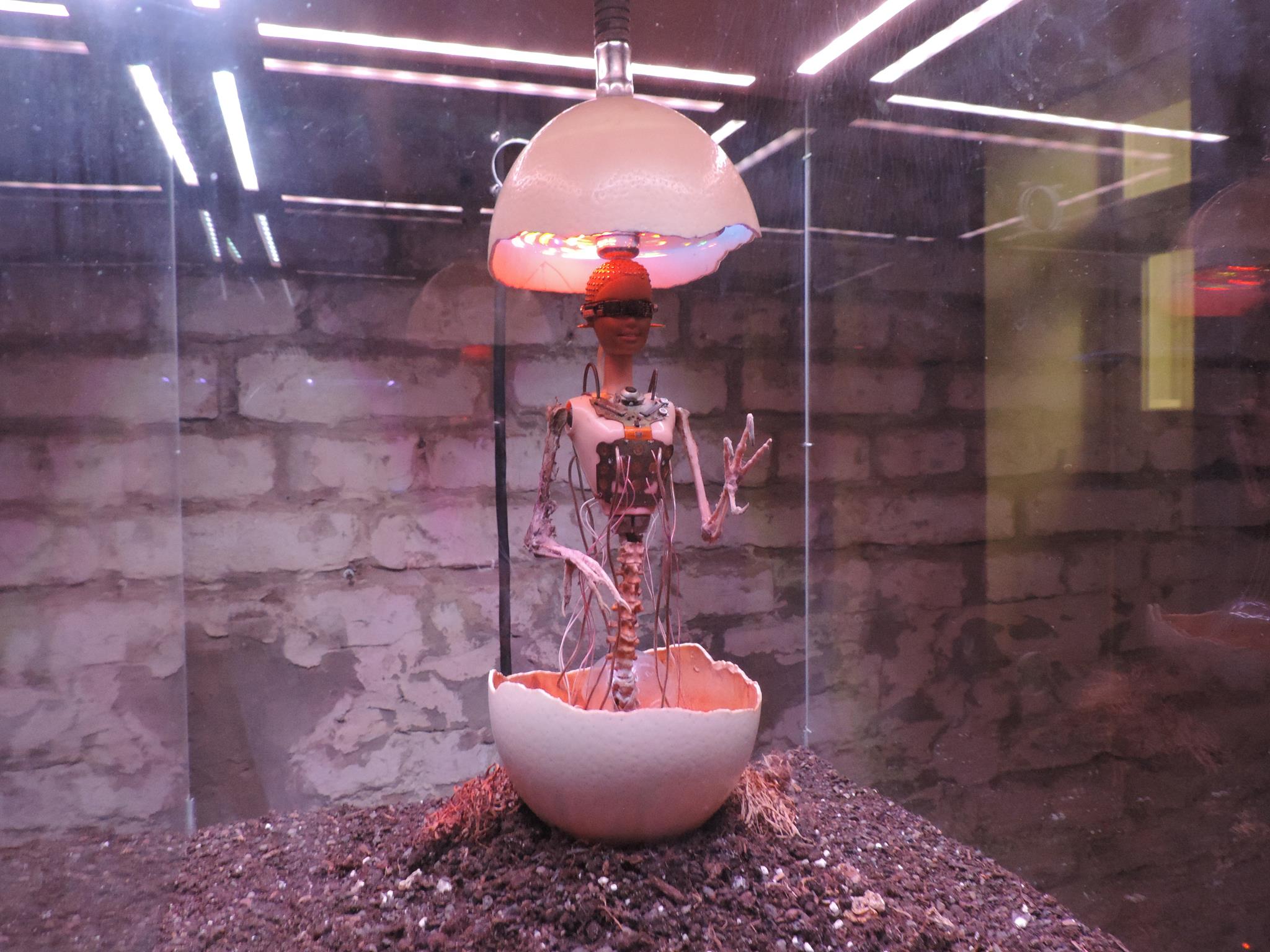 You create your fantastic artwork with parts you find in the garbage?

Yes, that’s all from everyday life, whether it’s a job or something on the street, sometimes you’ll also find what’s on the hardware store. Or I go for shapes and then something comes to mind and then I think, I have to have that. Then this is collected and sorted, ie size, shape and material. And then it practically comes together again in the figures. I have been collecting for about 20 years now. That’s a huge kit, that’s what you could call it. And that’s what I use. Sometimes things are there for 15 or 10 years in there. Sometimes there is also a part of it, which I have recently found, which brings the character then. It’s such a process that runs quite a long time.

You’ve got your own Lego gear and you build the things you want. With your works, you already have a critical message to society, that is to say, excessive consumption and discarding.

Yes, the parts themselves are practically there. And now is also an age where we have so much, so also on electronics on components. So there are moldings without end. So 100 years ago, things looked quite different. This is actually criticism in the parts themselves, because there are so many who then create such characters. And then also from technical and organic materials and the Barbie doll parts, which are then only scale. So it really is like a reflection of our consumer behavior and what is there. So yes, in what an age we live there. I’m critical of what we’re doing there. Because the parts that I take apart, so if someone has a calculator and it is broken, then throws the way and I disassemble and take out the smallest parts. It’s like a handwriting of what we use every day. 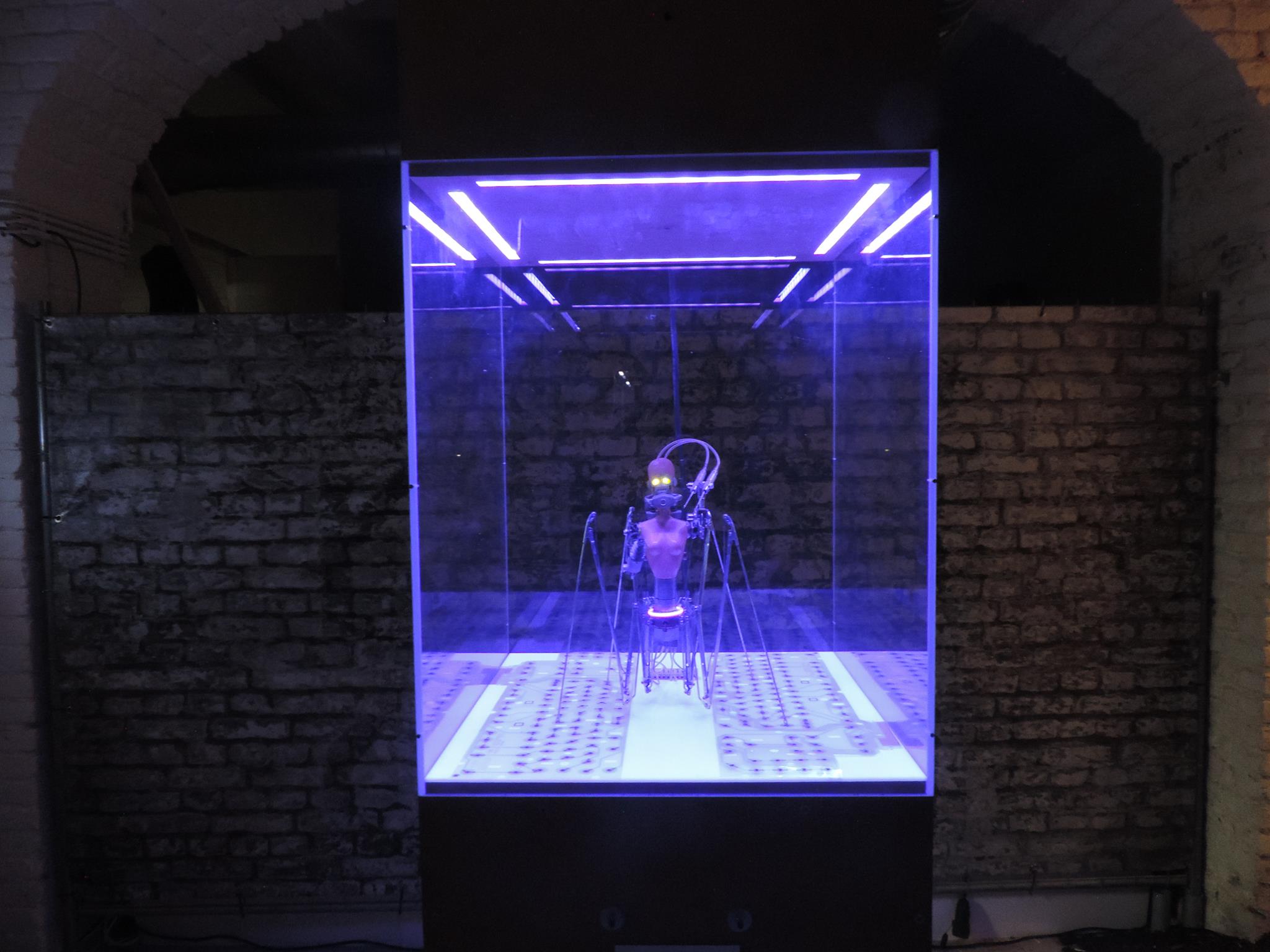 You do not just build the parts together somehow, so not only beautiful design objects. There are also very contradictory things put together. So the Barbie on the one hand to play for children, but also as a combat robot and mutant beings.

Right. So I’m always looking for the contrast, start with some parts. In the figure with the wings, there it was the wings themselves, of such a statue of Mary. So very cheesy, Maria with child. And then I took the wings and built a kind of terminator so completely out of metal. For others, it’s different. But it is always a part of what gives the initial spark and then it evolves. I do not plan it now, my part suggests something and then a bit of an idea develops. Then I just search out parts and then hold them next to each other until I have an arm and a spine or a leg or a torso, depending on what I build. Whether I build a Barbie doll. So then I complete the parts with other parts and then complemented by everything.

I have the Lego blocks all the time, except that you’ve magnified the field incredibly and actually can use everything there is as a building block. So you could also take a garden door, if that fits in somewhere.

Yes, yes. And friends and acquaintances, so they know that and already know it. They give me their old electrical appliances. A friend of mine is a doctor. He brought syringes and stuff from the hospital. So also things that I do not get so ran. That comes along to it, because that is now also known to some people, and the meanwhile also provide me with additional parts. So it grows. It’s like a monster project. I also call these Reconformed Creatures. Like the form, reform and conform. And re-conform, so literally “again with form”. 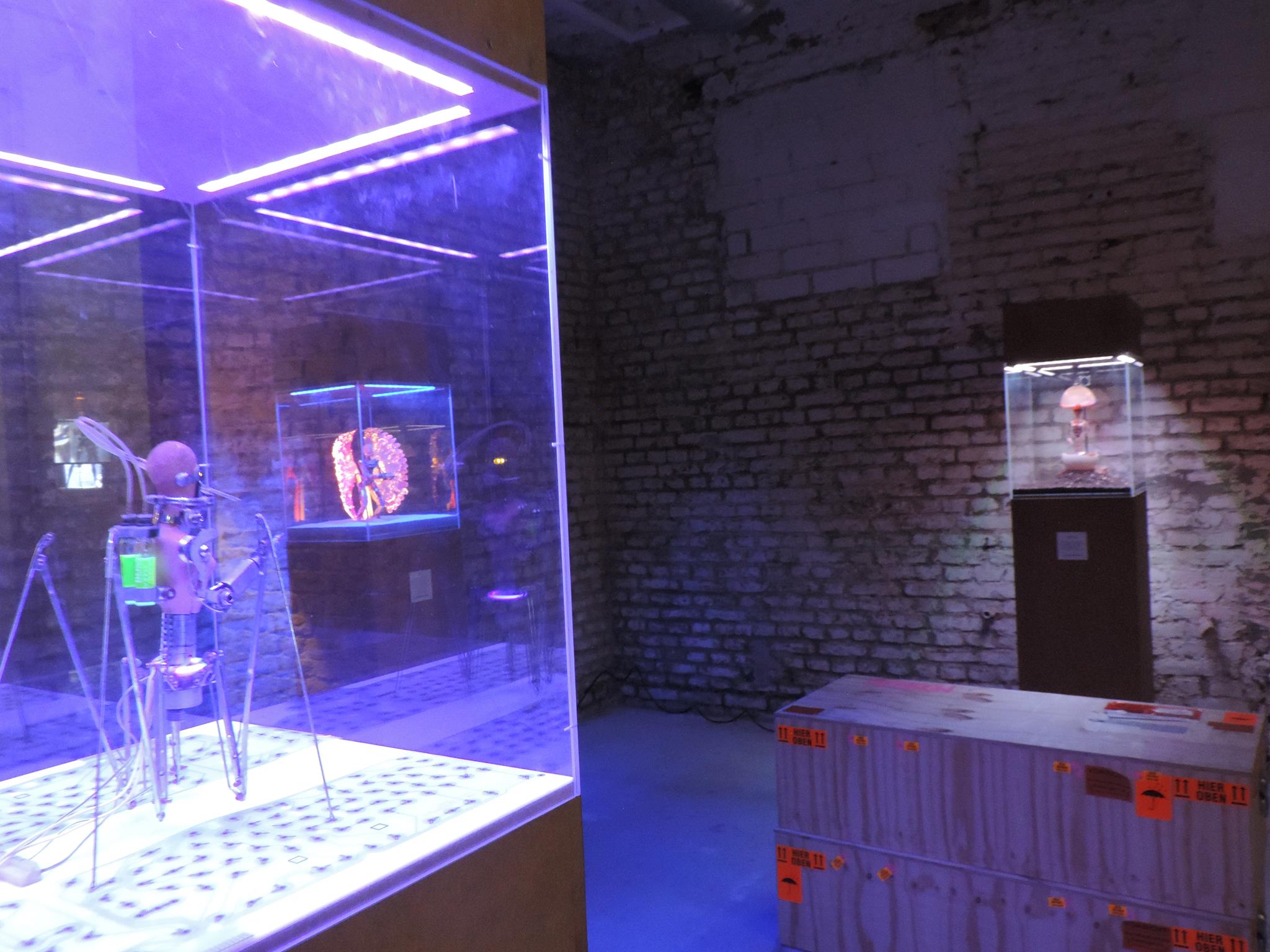 So again with this special kind of contrast.

With the Barbie dolls, the idea was that man is in there and that the scale is first and then the technical and organic, what bounces on each other. I wanted to express something with that. So they speak for themselves and maybe we should think about it a bit, where we move between our organic body and our technical digital world. Where are we right now? Because I think that sometimes we do not keep up with our heads and we consume virtually with our brains throughout digitally virtual already a bit lost in thought. So if we keep up, so to speak, that’s part of it, too.

What else do you have for works?

There are still some larger works on scale. I made a kind of spaceship, that’s three meters long. Then another computer virus from a thick wiring harness, where I have also installed the cables of electrical appliances. That’s like a worm. So the game is actually going everywhere with me. I also did collages. If I open a newspaper somewhere and see a picture, and I like that, then that is first put aside and at some point I cut it out. Then I play with it. So also two-dimensional things. But always something that you can also collect. What you find or sometimes I have the feeling that I am not looking. So sometimes I have technical parts to get an effect. But otherwise I let it come to me so that is, so to speak, a bit of life. Where one day in this street, on another day somewhere else and then there was something on the street, then that was basically my everyday life, which has given me the part. So I collect and put something out of it together. Yes, like Lego, just out of life. 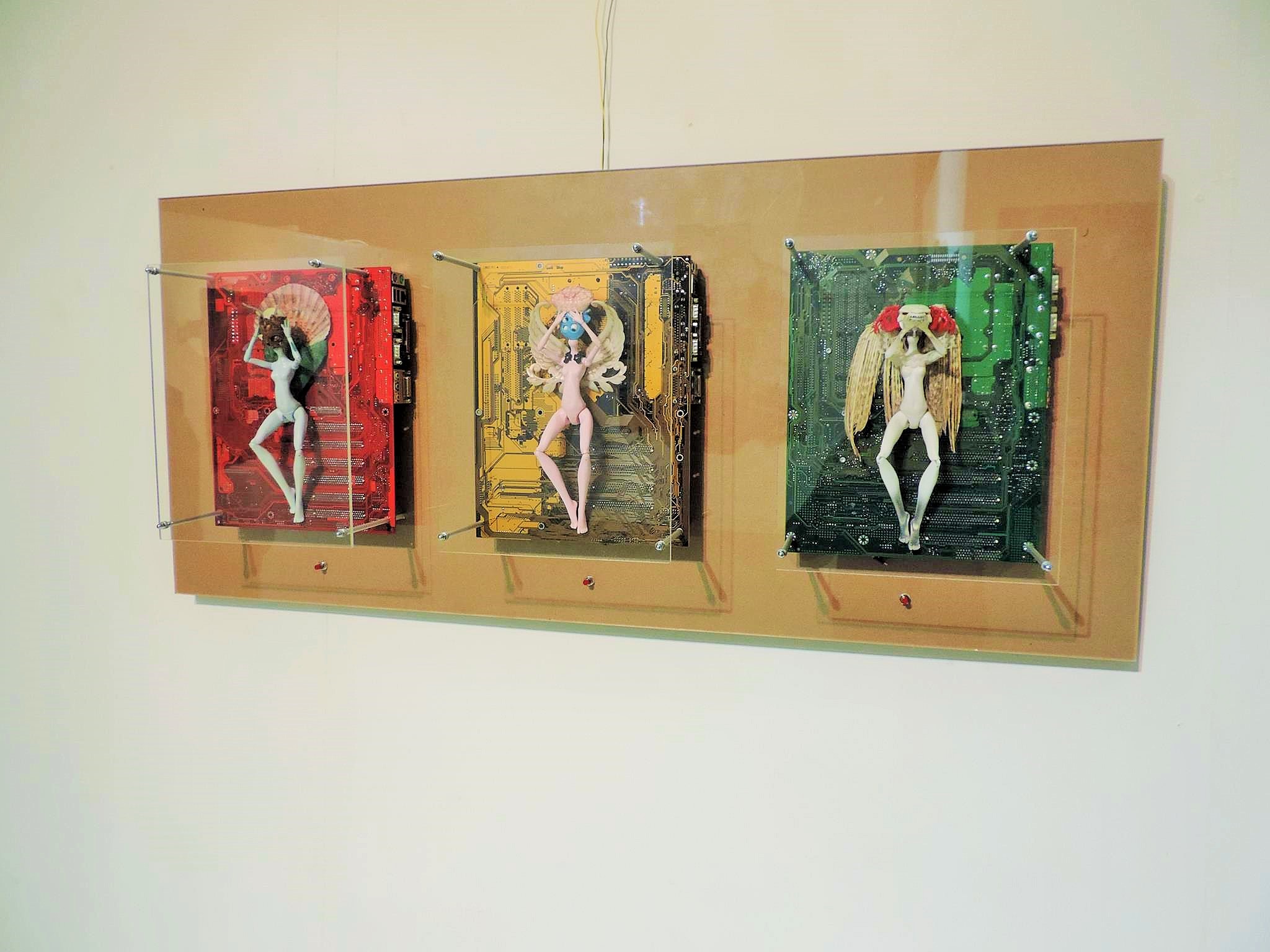 1998 – 2006 Studied architecture at the University of Applied Sciences Darmstadt

Since  1996 Hunter and collector of Barbies and electronic waste 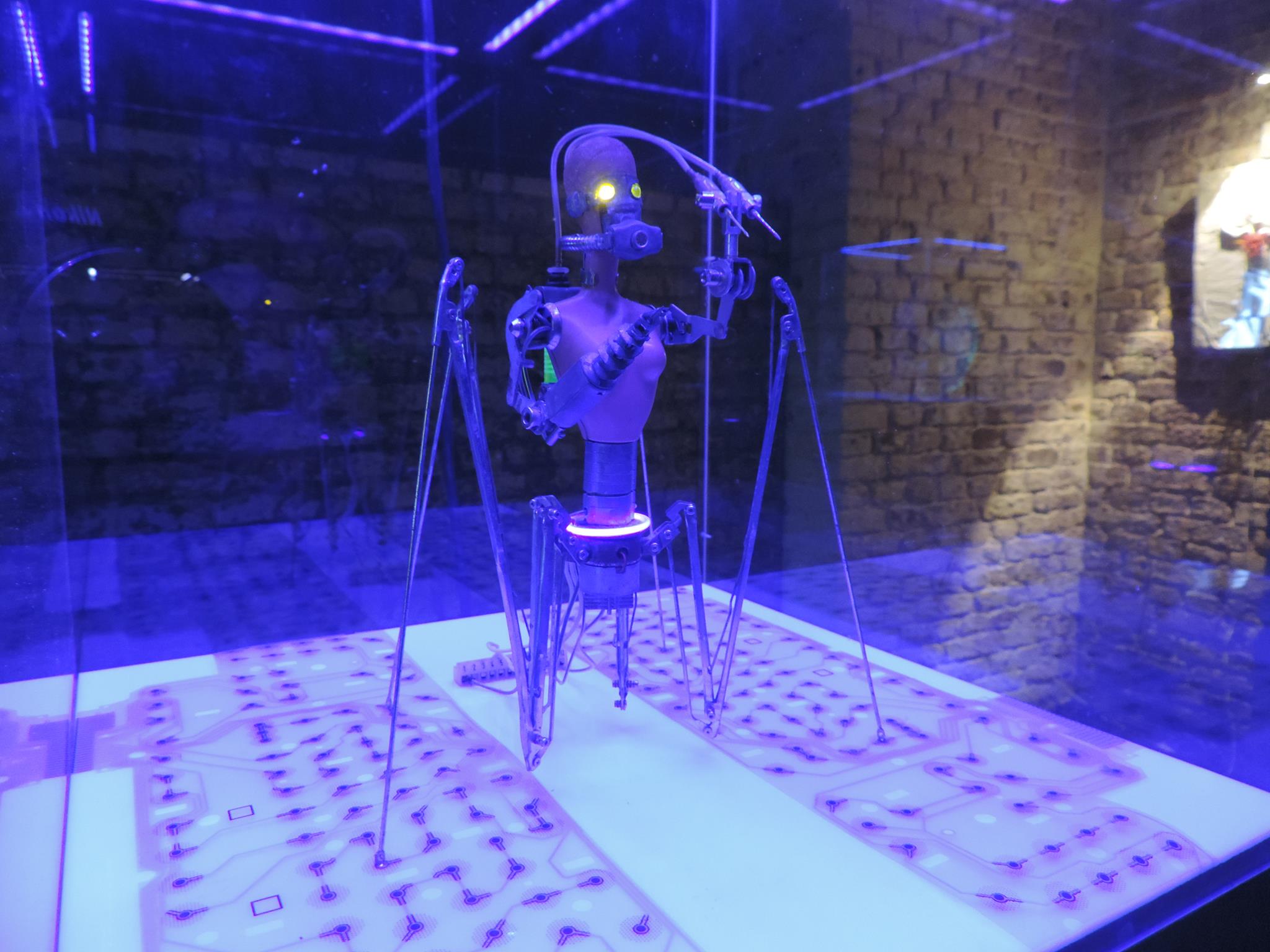 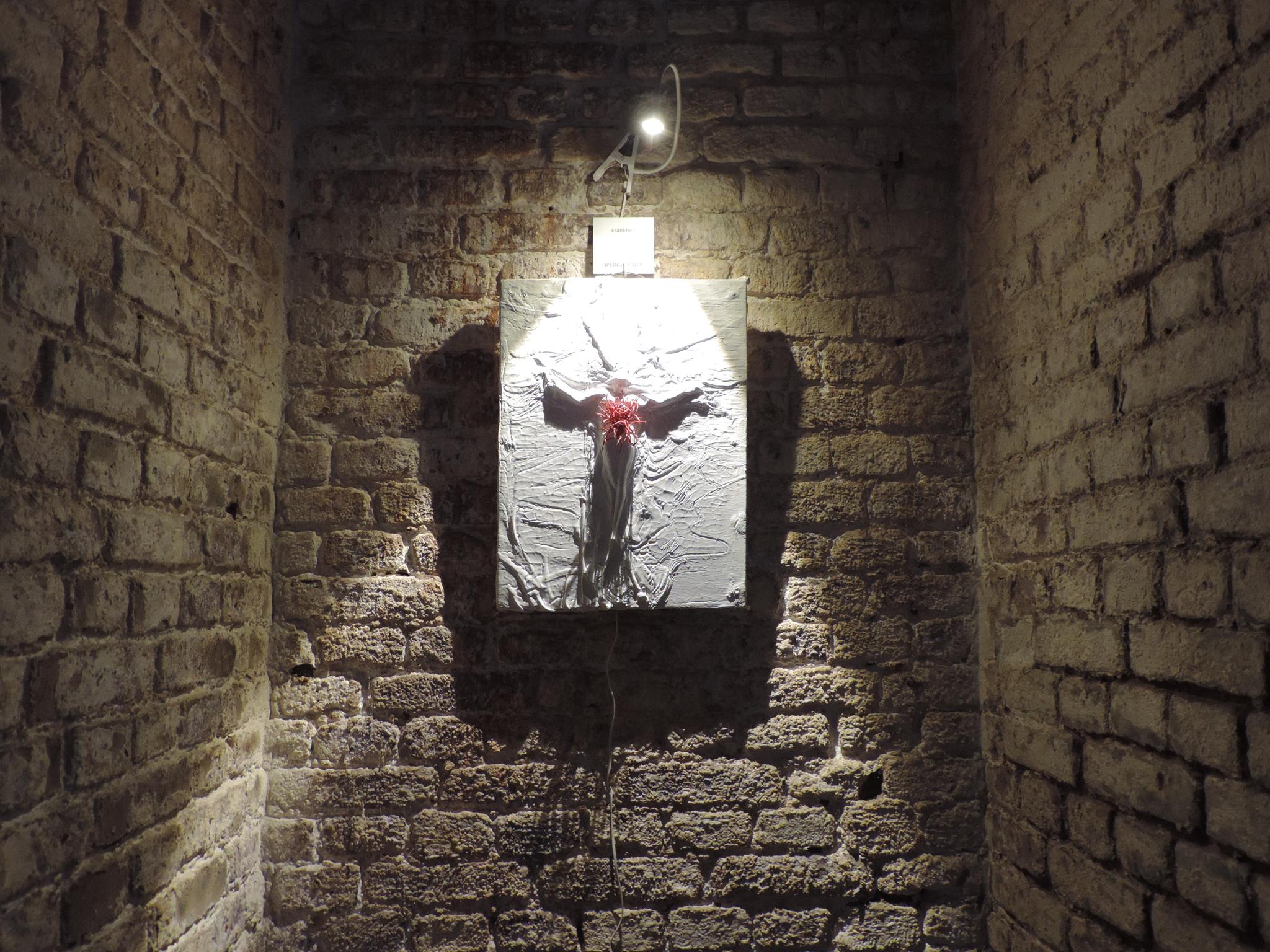