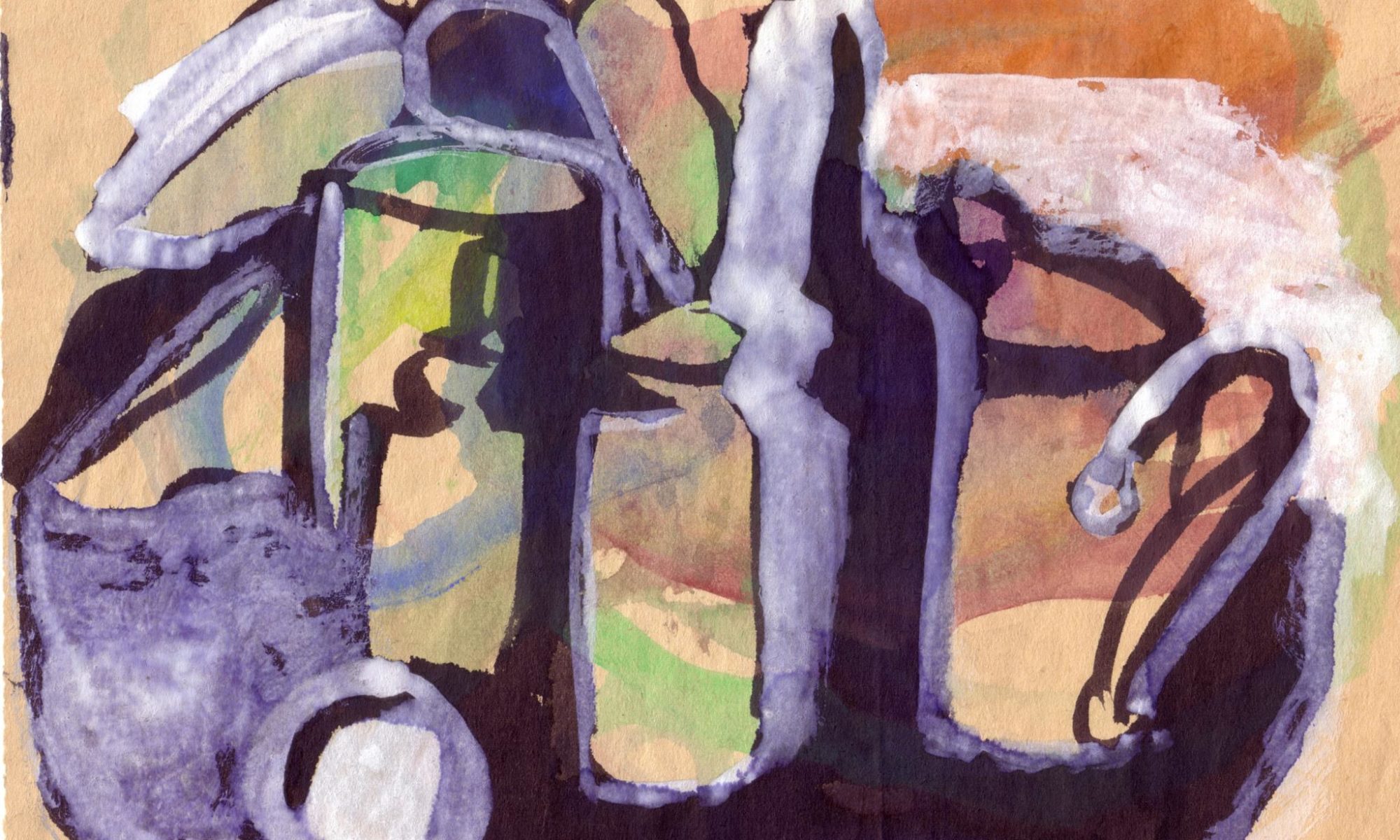 Creative visit in the studio! The Frankfurt painter Angelika Grünberg was a guest on Radio X and told us about her interesting work and fascinating art. The freelance artist studied art science and free graphic arts in Frankfurt am Main, after which she became self-employed in this field. She paints with acrylics and watercolors and exhibits, but also teaches the techniques, gives workshops and organizes courses at the technical college and the adult education centre. 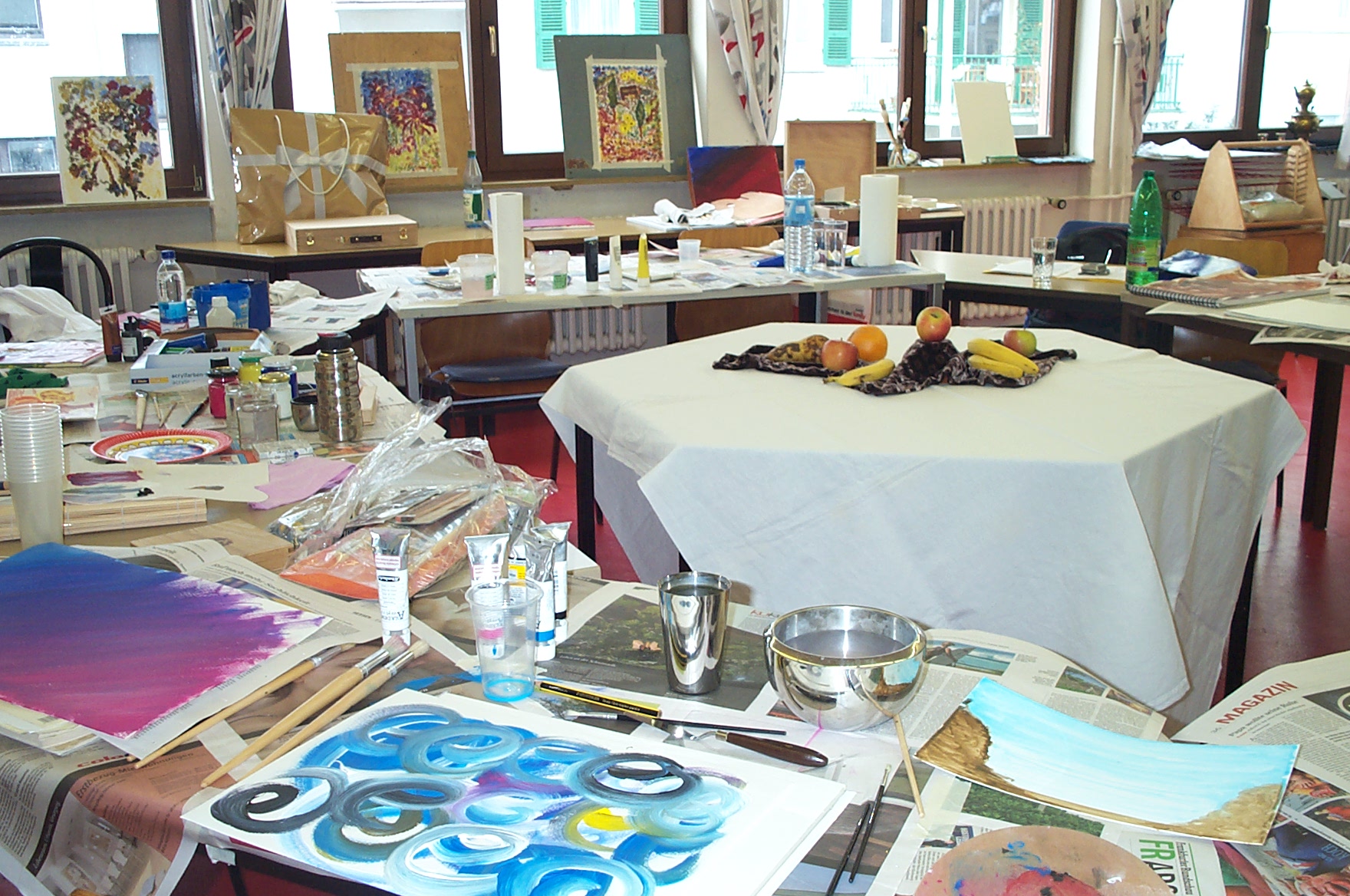 Since 1988 she has been leading art seminars in adult education, with children and in the field of therapy. She organizes painting excursions and district visits with brushes, paints and canvases in their luggage. At the  „Berufsverband Bildender Künstlerinnen und Künstler Frankfurt e.V. (BBK)” (=Professional Association of Visual Artists) , she was employed for a long time, she is on the board of the Arbeiterwohlfahrt Frankfurt Nordendzentrum (AWO) (=Workers welfare society)  and since 2007 also on the board of the KunstGesellschaft e. V. (=Art Society) – a really active woman. 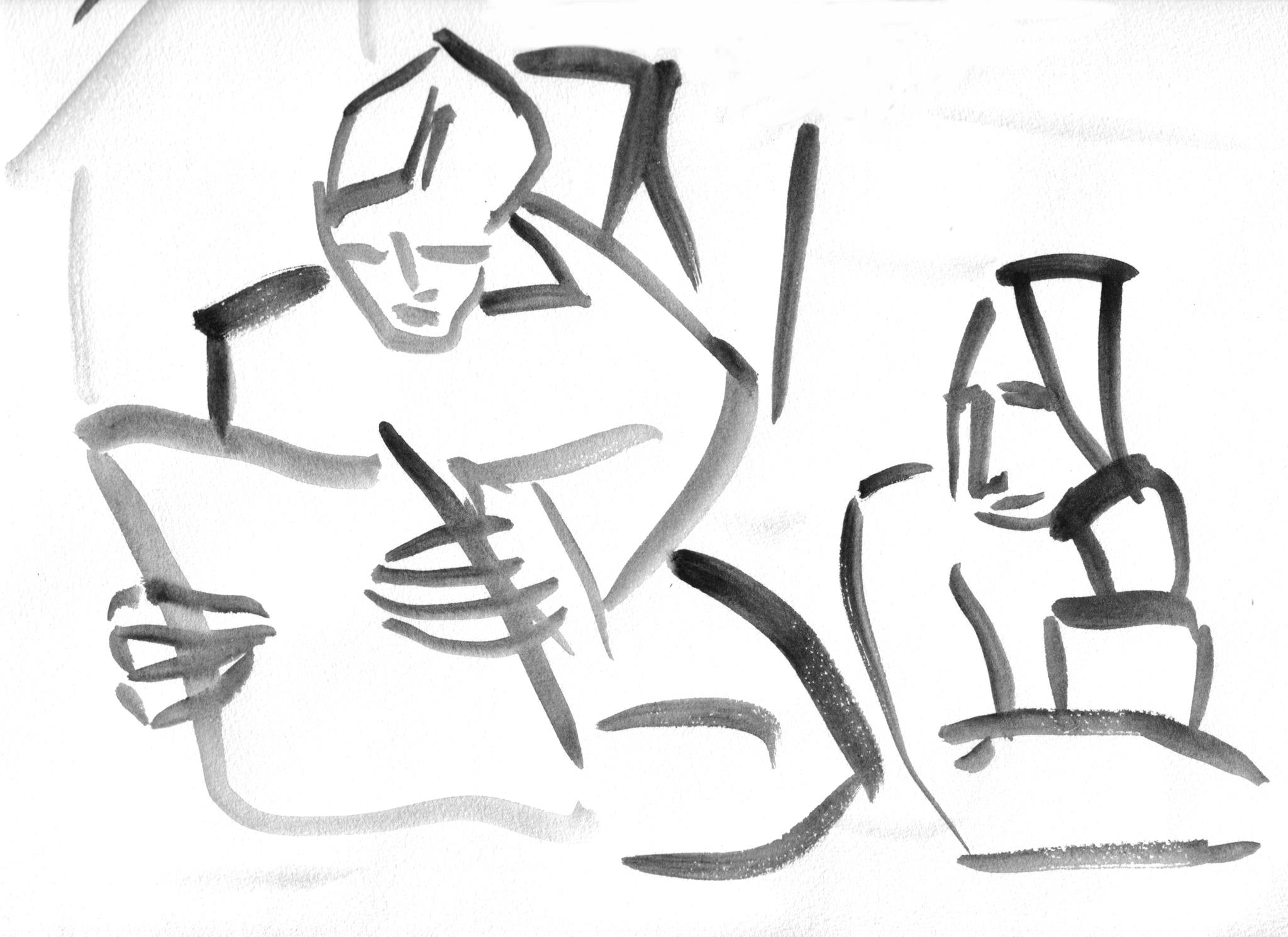 Angelika Grünberg not only tries to bring art closer, but also to bring people from the districts together by going into the neighborhoods and painting there together. This can be in different rooms or even outdoors. Knowledge and skills can be refreshed or learned from scratch. The courses run over several weeks, but it is also possible to participate in only one of the meetings. Prices start at 24 Euro per course unit. 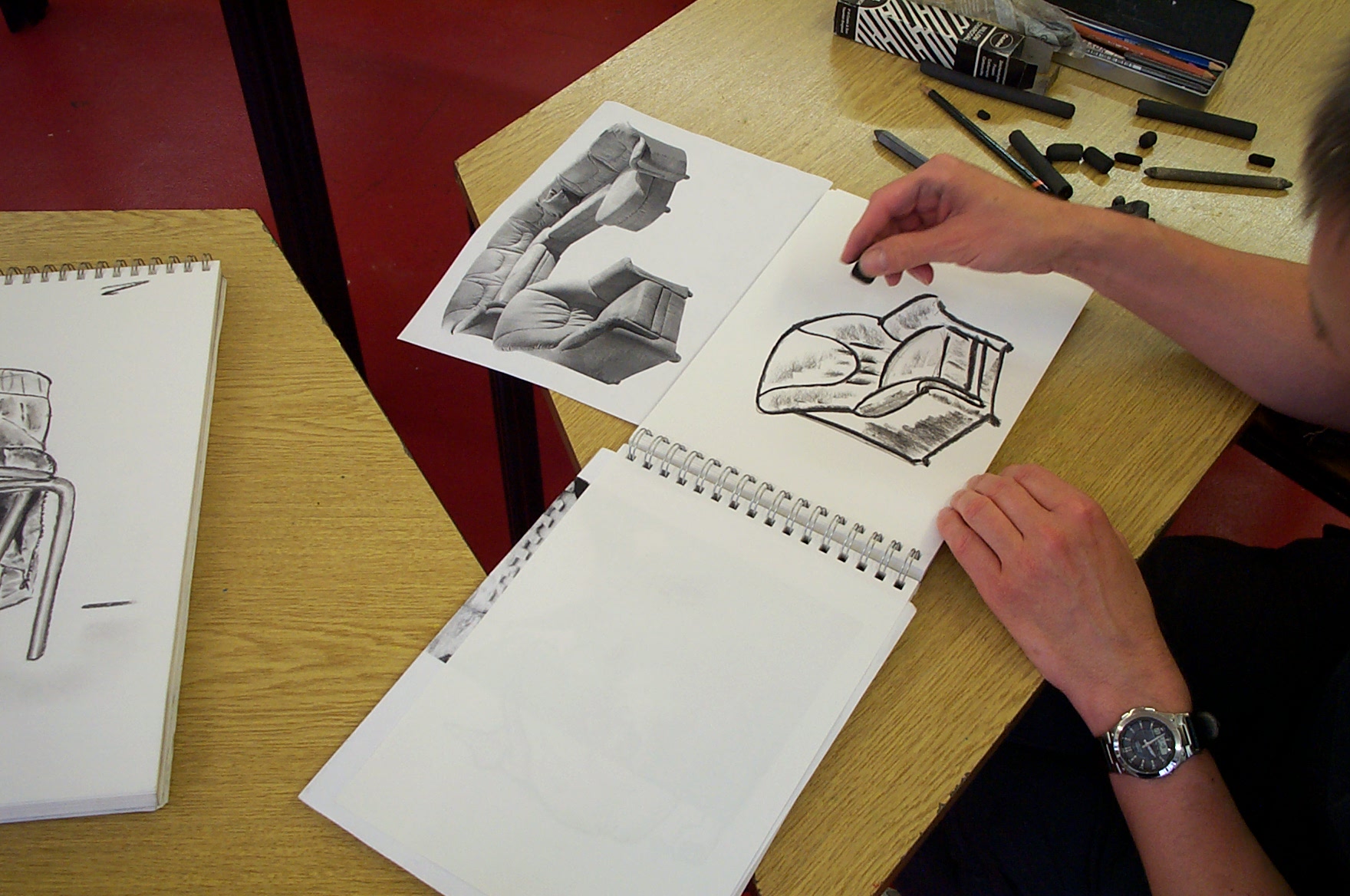 In an interview on air, Angelika Grünberg tells us more about herself and her work. The podcast is in German, in the following the conversation is written and translated into English.

Tell our listeners about your art. You’re as well on the board of the Frankfurt Art Society.

Yes, that’s the club I’m in. And sometimes I always say that other people just have their hobbies. And the art society is perhaps more what you could call a hobby in my case. Because living and earning my money is what I do with art education. I organize painting workshops and drawing courses in Frankfurt and I am passionately involved in politics in the art society. Because art and society are always focused together there. 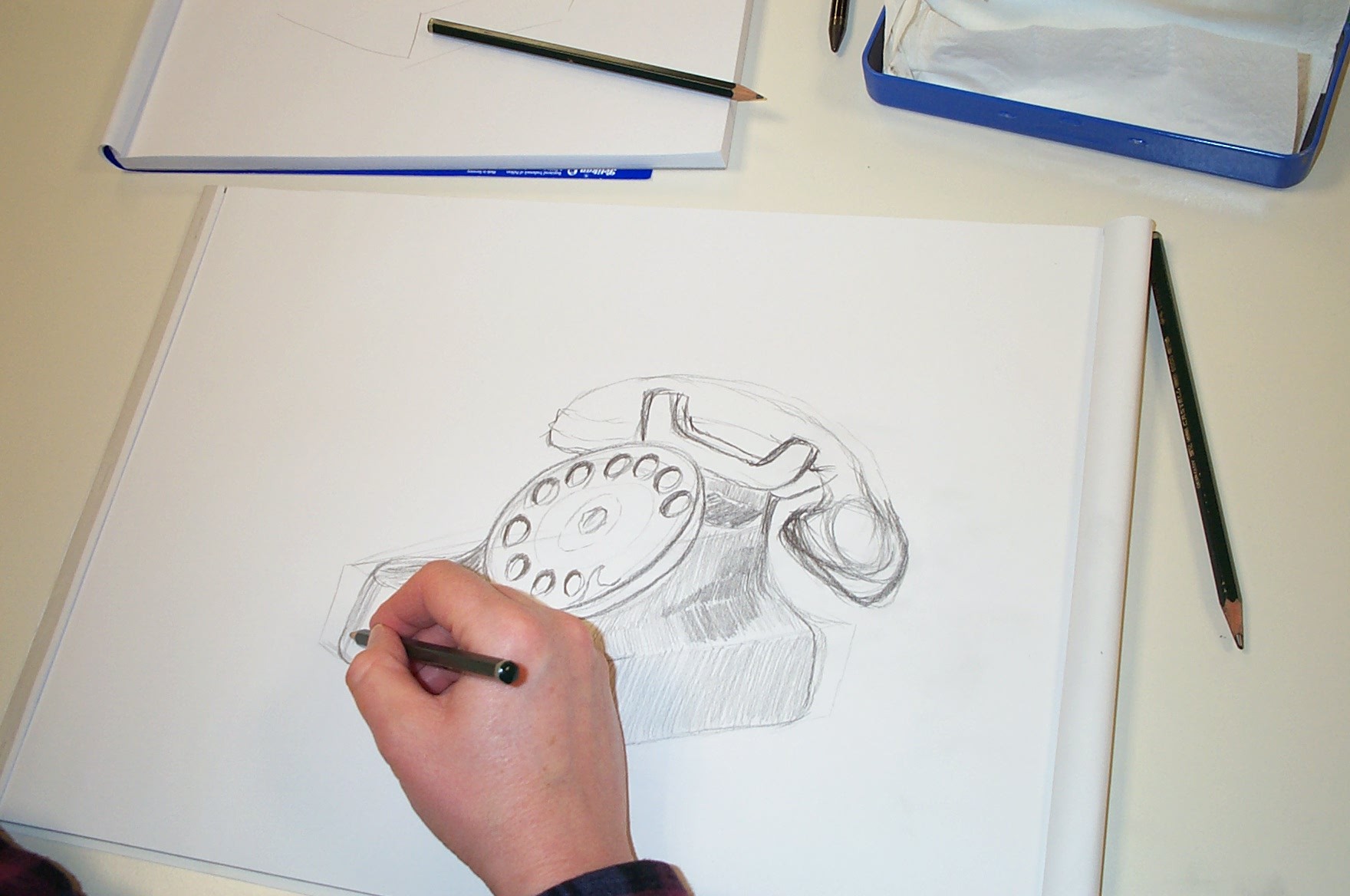 For the art society you are regularly conducting art talks.

At the art society my main focus is the moderation of picture discussions. This means that I stand in front of originals in museums or galleries and next to the picture is a group of interested people and volunteers. And then they can and may talk about the picture, tell what they see and say how they find the picture and whether they would put it on their walls at home. Of course, it then does not remain only with this superficiality, but it goes into the depths. It is discussed what meaning could be behind this and that. We keep on discussing according to the more complex question: What was the artist’s intention? But there are just wide possibilities of interpretation and the most important thing is that everyone can give his own opinion and they remain parallel to each other. That is always our motto and that is a wonderful thing, which many people are not used to. That they are simply allowed to speak their mind and are not reprimanded for it, but learn as well to let others’ opinions stand. 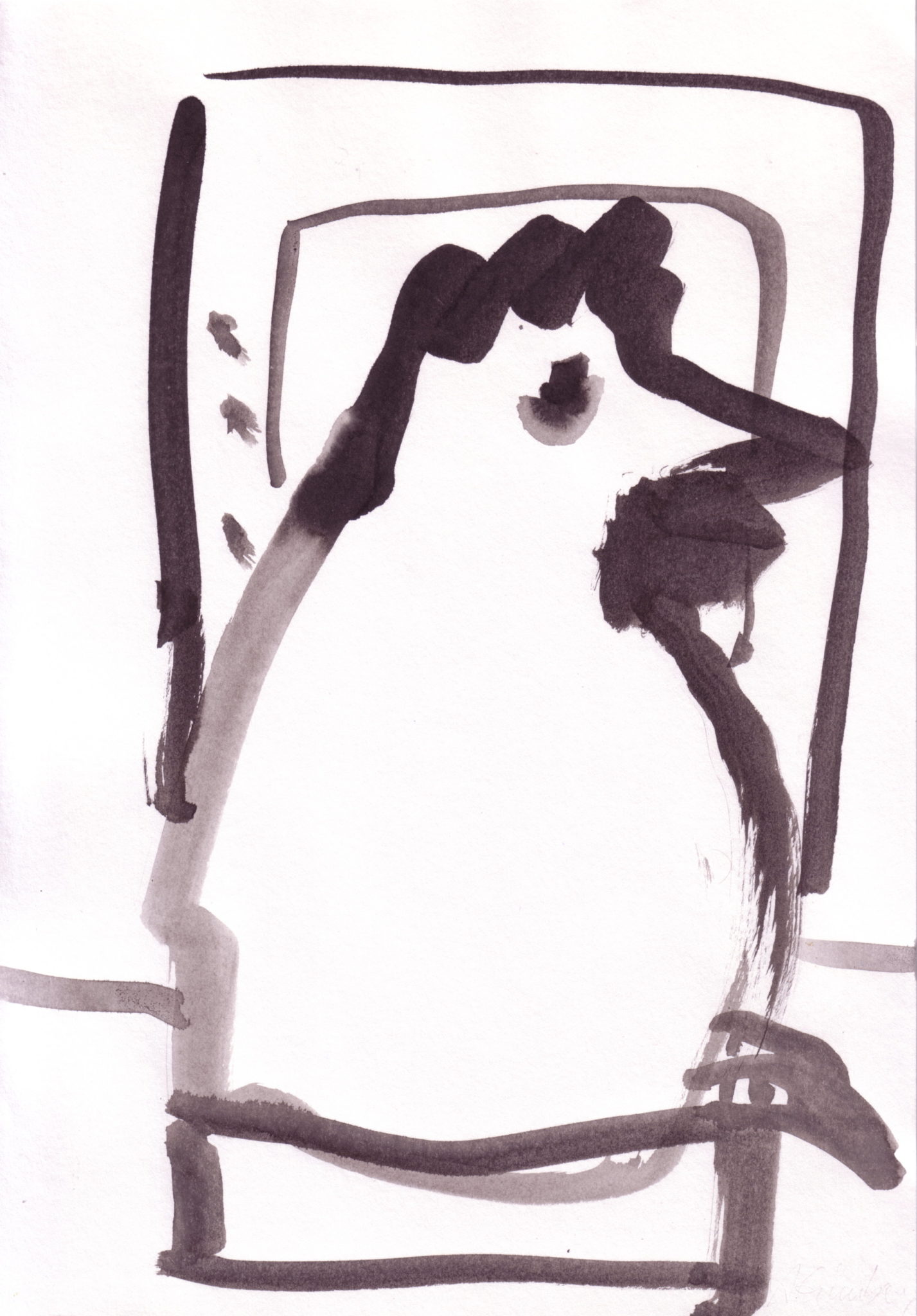 So this is already part of the art education you are doing, but more freely designed. People should learn to interpret and to look at objects in a different way, but also to exchange ideas afterwards.

That’s it. But it’s not that this is all completely free and easy now. We already have a stringency in it, a whole plan after we act. So it starts with the question of taste and then we first collect what we see in the picture. So slowly it then goes over into the level of meaning. It’s important that one repeats these actions and it´s also important that people realize what they have said and what everyone has said so that this can stand next to each other. From this really great insights develop, which may even stand above what you might see in magazines or in art history treatises. Well, it often comes out more than you expect. 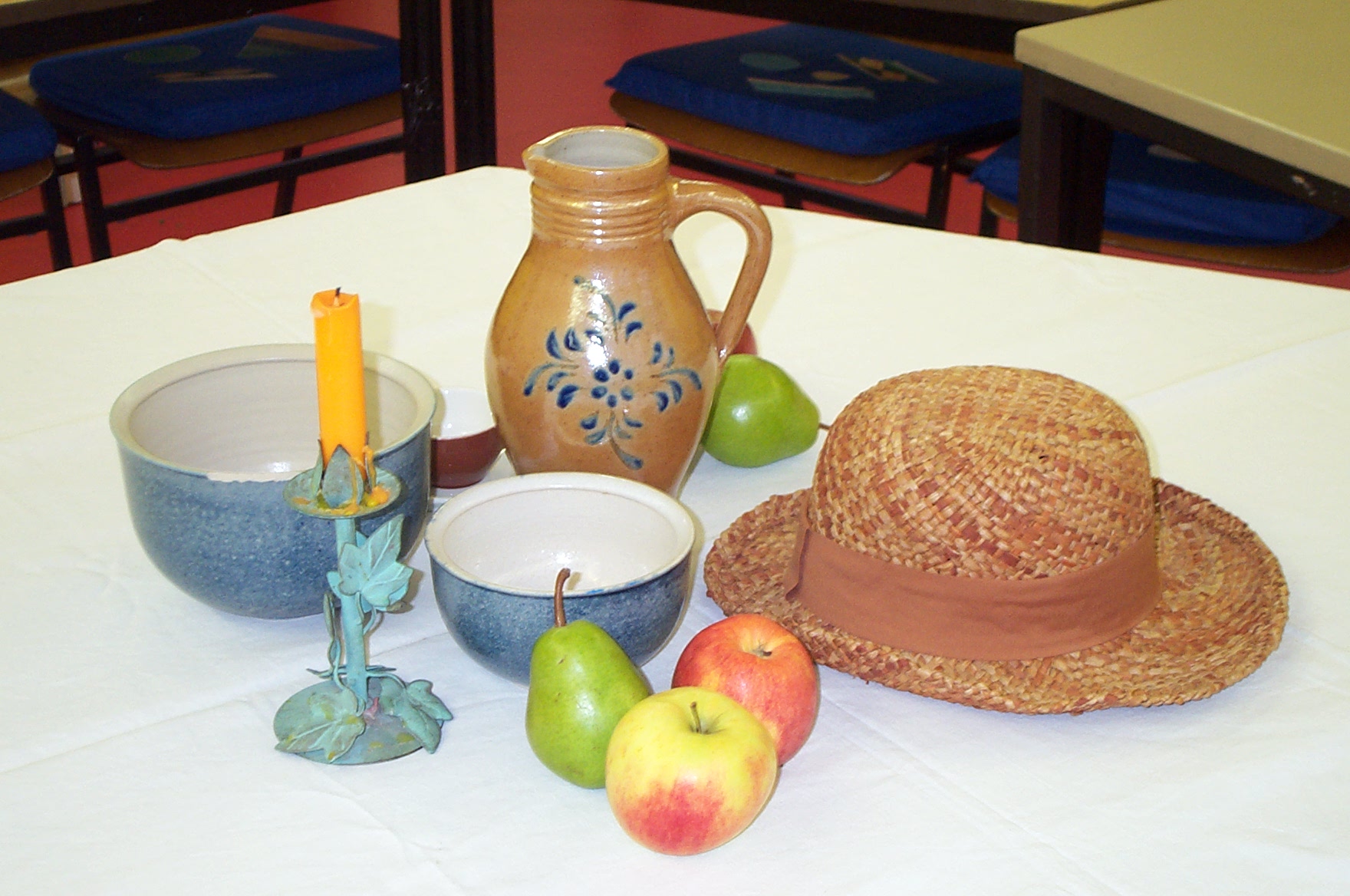 With your courses, that’s practically a step further. So if people really want to become active themselves and want to draw or paint, then you take them by the hand and teach them.

Yes, so basically it is comparable. People come to me who have perhaps never painted or drawn before in their lives, or others who want to refresh their knowledge. Some of them have been with me for a long time and they can all learn something at the same time. I really look after the participants individually during the courses, explain everything and deal with the subject. Most people then really want something more cultured. This is not supposed to sound negative, but they really get a ten to fifteen point program, depending on how long the courses are. At the community college I am also in the Hochtaunuskreis, but mainly here in Frankfurt. And the beginners, they really learn from scratch on first watercolor or acrylic painting or drawing or just depending on what the courses include. The advanced students work in parallel on topics that the group has requested in the previous course. Most of them come back and then there are fixed topics. 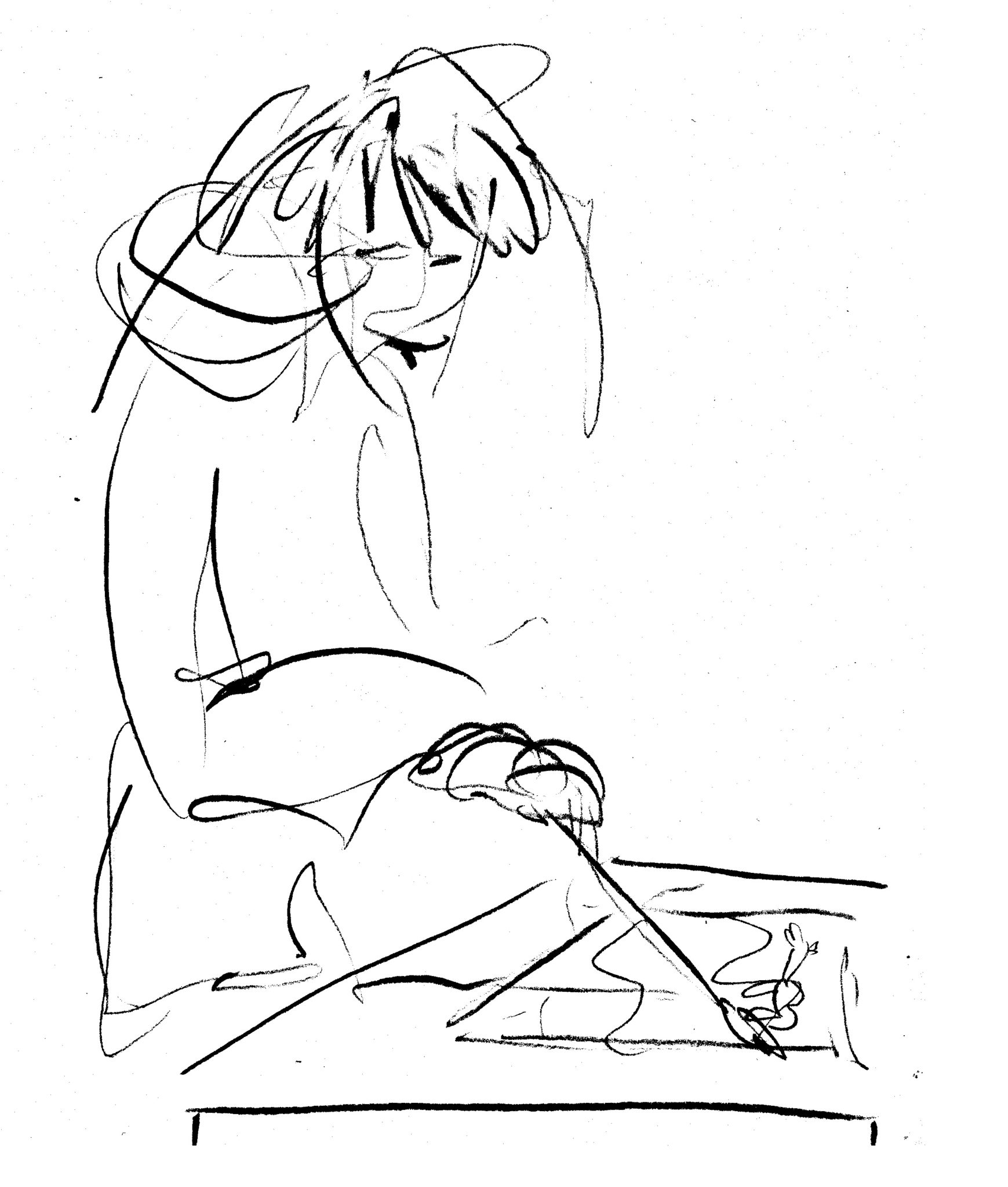 But it is already mainly about watercolor and aquarelle? So this is the technique?

Yes, well, it’s a technique. I give watercolor classes mostly, that’s true. But I also give acrylic classes. On Wednesday evenings, for example, I give events for acrylic in the Ostend. Watercolor is a technique that is heavier than acrylic, I’ll be honest, but you don’t have to drag so much and basically the participants are more into watercolor. Well, at least that’s how I feel with my groups. This is more part of the graphics and I am also more from the graphics. Whereby the acrylic also works quite well and I offer this mainly as a workshop on Saturdays. 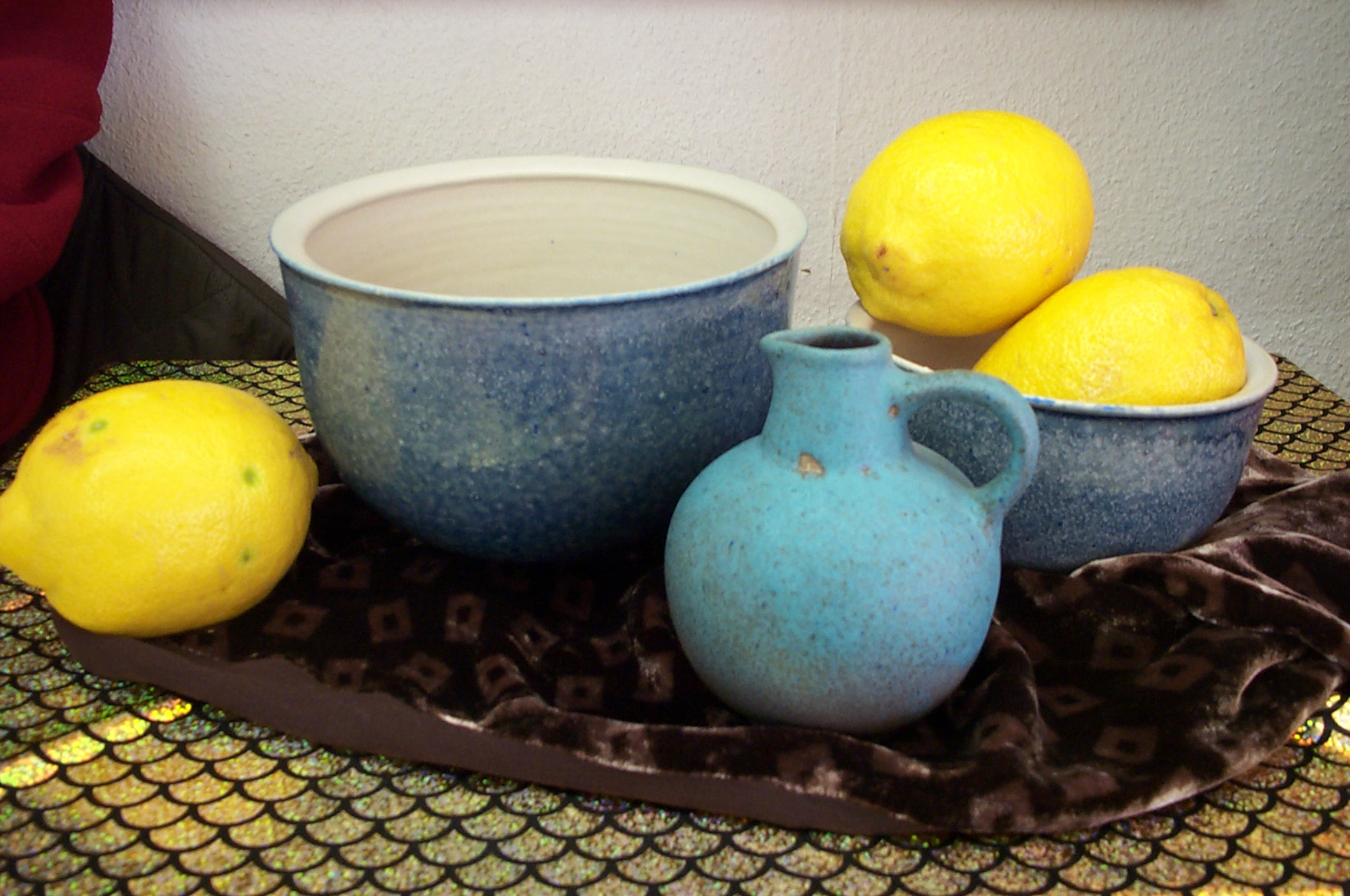 How can people who find this interesting or want to take a course find you and contact you?

The best way is via the homepage www.agruenberg.de, there you can find all information and my contact addresses. But I can be found as well on Facebook too. 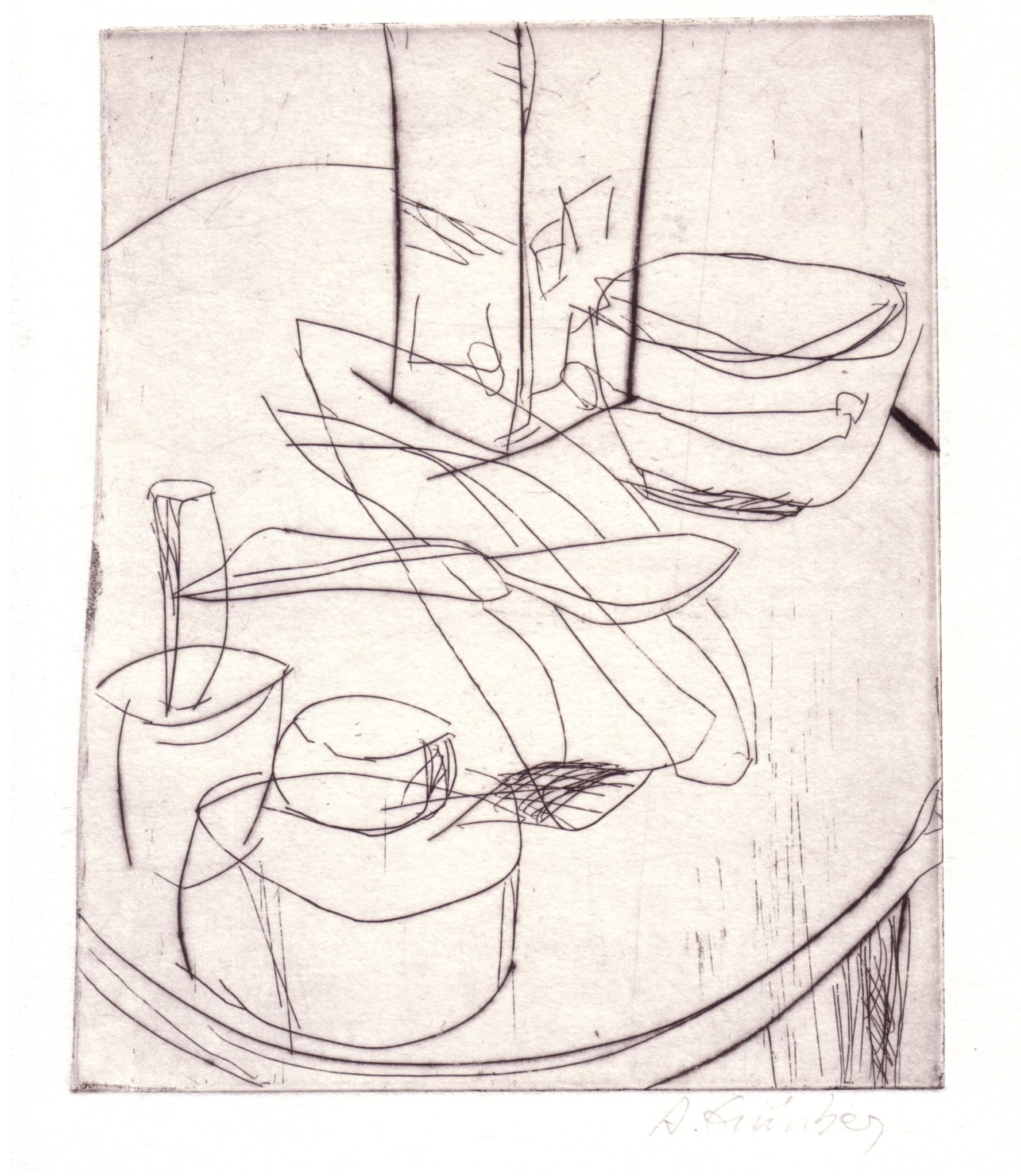 In Frankfurt it is generally difficult to find an apartment at all, so the housing problem is very acute here. But if you want to rent a studio now, it will be even more difficult. Many in the city therefore join together and form groups or associations. For example you came to an art space via artist friends.

The artist Kerstin Lichtblau and I studied art education together, at first our paths separated and we went in different directions. So she went to the Städel School and I concentrated more on art education, although I also make art myself. As far as the workshop situation is concerned, I have various places where I give courses. These are often social institutions that rent the rooms to me and with whom I also work very well together. And the friend of Kerstin Lichtblau, the artist Michael Bloeck, also known as “bepoet”. He has a studio in the Hellerhofsiedlung, the “Aktionsraum bepoet” and he has often made the studio available to me for workshops. Basically they often take place outdoors, but there we have a nice meeting place. There it was simply about drawing in the neighborhood Hellerhofsiedlung. 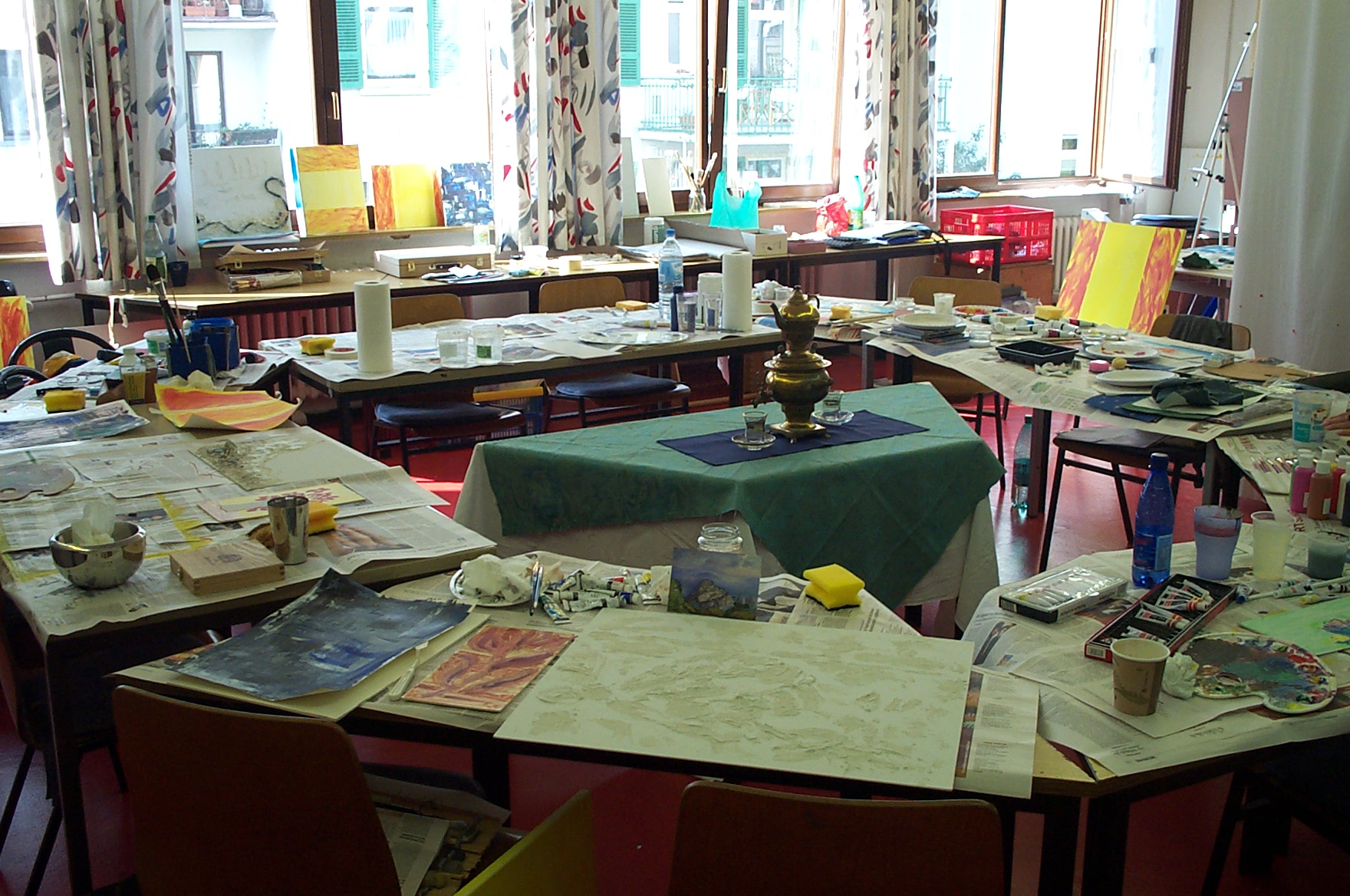 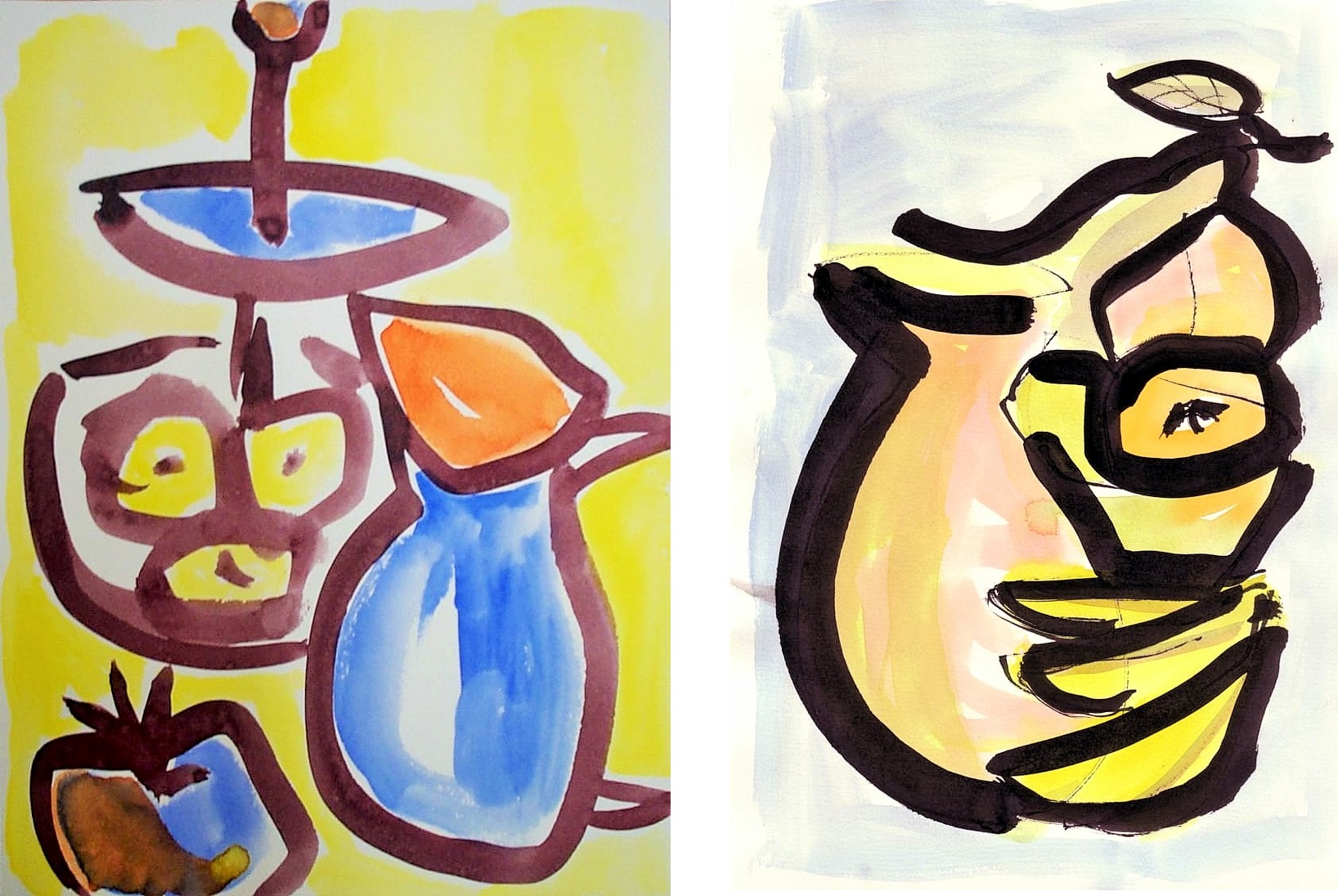 But there is now suddenly a strangely large building standing there, blocking the view.

Yes, I told you about that earlier. We started there to look for motifs and got to the nearby Europa Quarter pretty quickly because there is a wooden tower from which you have a beautiful view of the Frankfurt skyline. But then we went up the wooden tower and found out that there is now a building in front of this view of the skyline. We found it rather funny and there were enough other motives for drawing. By the way, the wooden tower is very nice and there is also a very great gastronomy down there, I can only recommend it. Otherwise we went back to the Hellerhofsiedlung and experienced the different atmospheres in Frankfurt. So the Europa Quarter versus the quarter Hellerhofsiedlung. 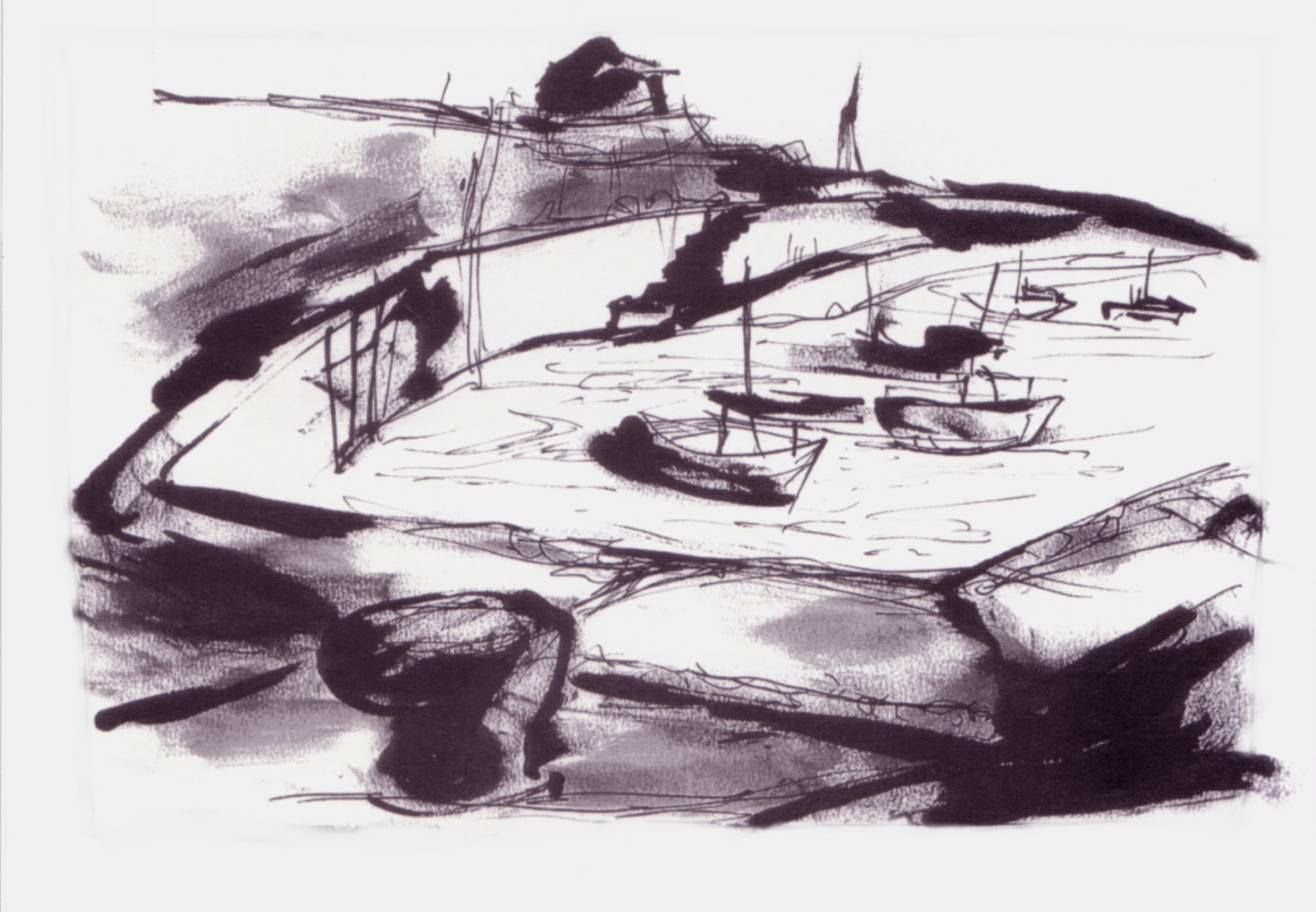 That’s it. This is the concept I had in mind from the beginning. So I started my own business as an art teacher at the end of the 90s. And then I thought about going to the quarters Nordend, Ostend and Bornheim and try to organize my courses there parallel to teaching art and to bring people together. In other words, in such a way that friendships are also formed and that people who perhaps don’t do so much on their own can then do something together with others. And yes, that actually works out pretty well. Finally, I would like to recommend the art society in Frankfurt called KunstGesellschaft, which can be found on the Internet at www.kunstgesellschaft.de. Interested parties are welcome to contact us and participate. We regularly walk through Frankfurt and observe the city and the pictures with open eyes and a critical view. 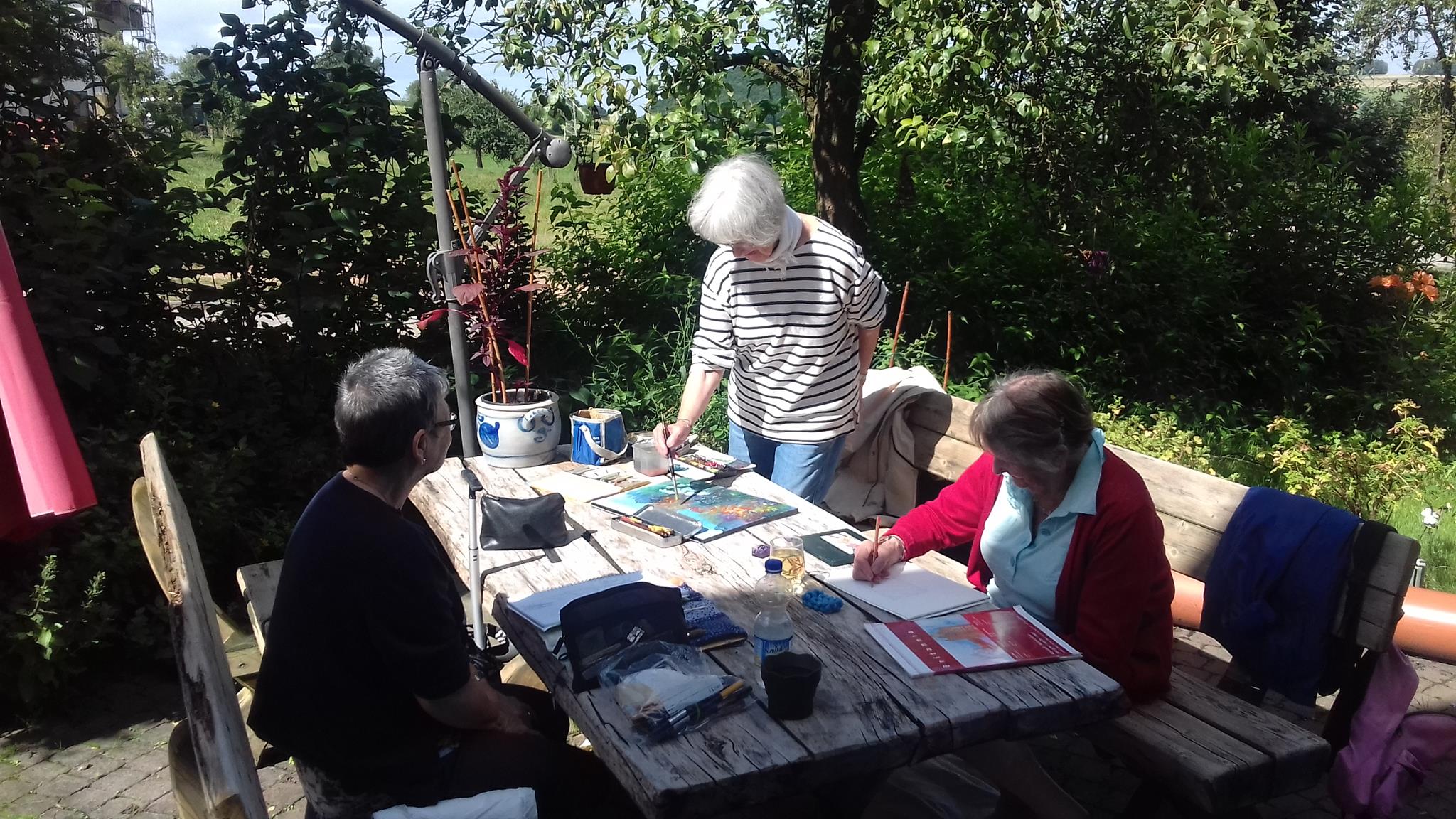 THE TEACHING CONCEPT OF ANGELIKA GRÜNBERG

“My teaching offer is aimed equally at beginners and advanced students. In addition to teaching the basics of drawing and painting, an expansion of the creative expressive possibilities is achieved. The participants work on the respective seminar topics in front of the real object, according to templates and/or by means of visualization of inner images. Breaking up old viewing habits and developing an individual formal vocabulary are important aspects on the way to an individual image. The pictures of my course participants are regularly presented in exhibitions. You will also find the results of the painting and drawing courses under the heading `Picture of the month´ on my website“. 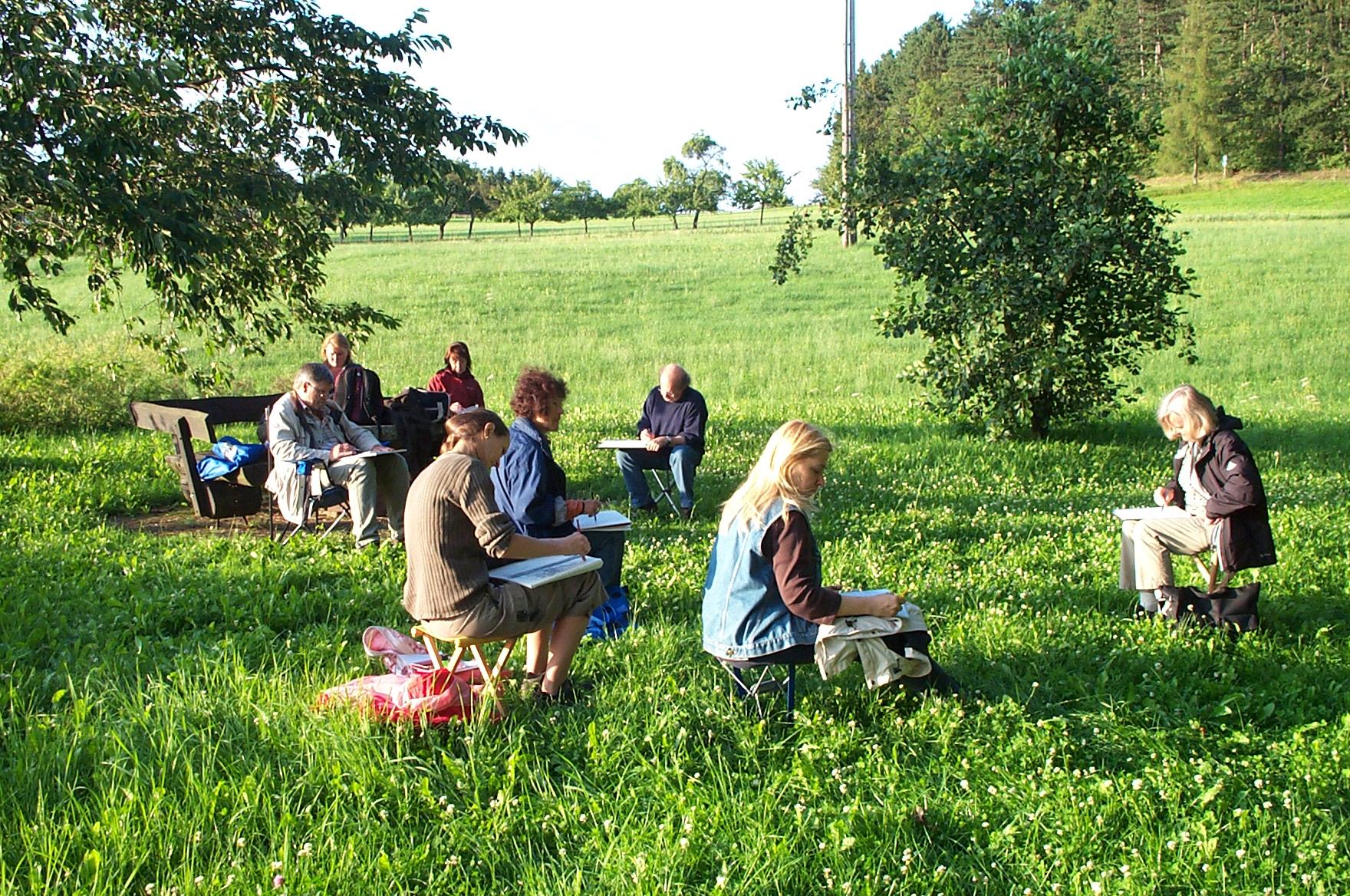 Since 2016: 17 Ost / Day meeting for women – Director of the painting workshop

2001: Association for the Promotion of Intermediate Arts, Krefeld 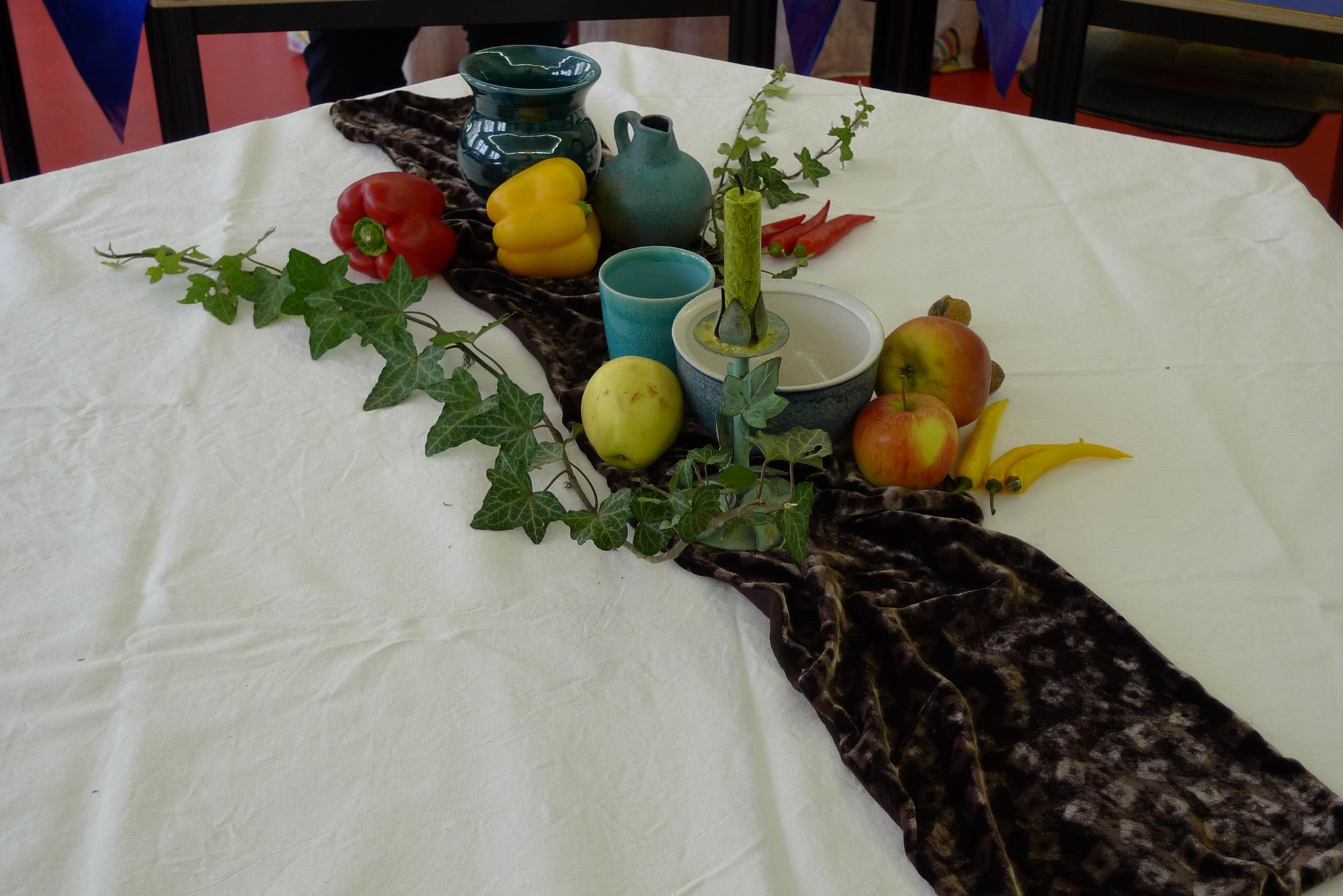