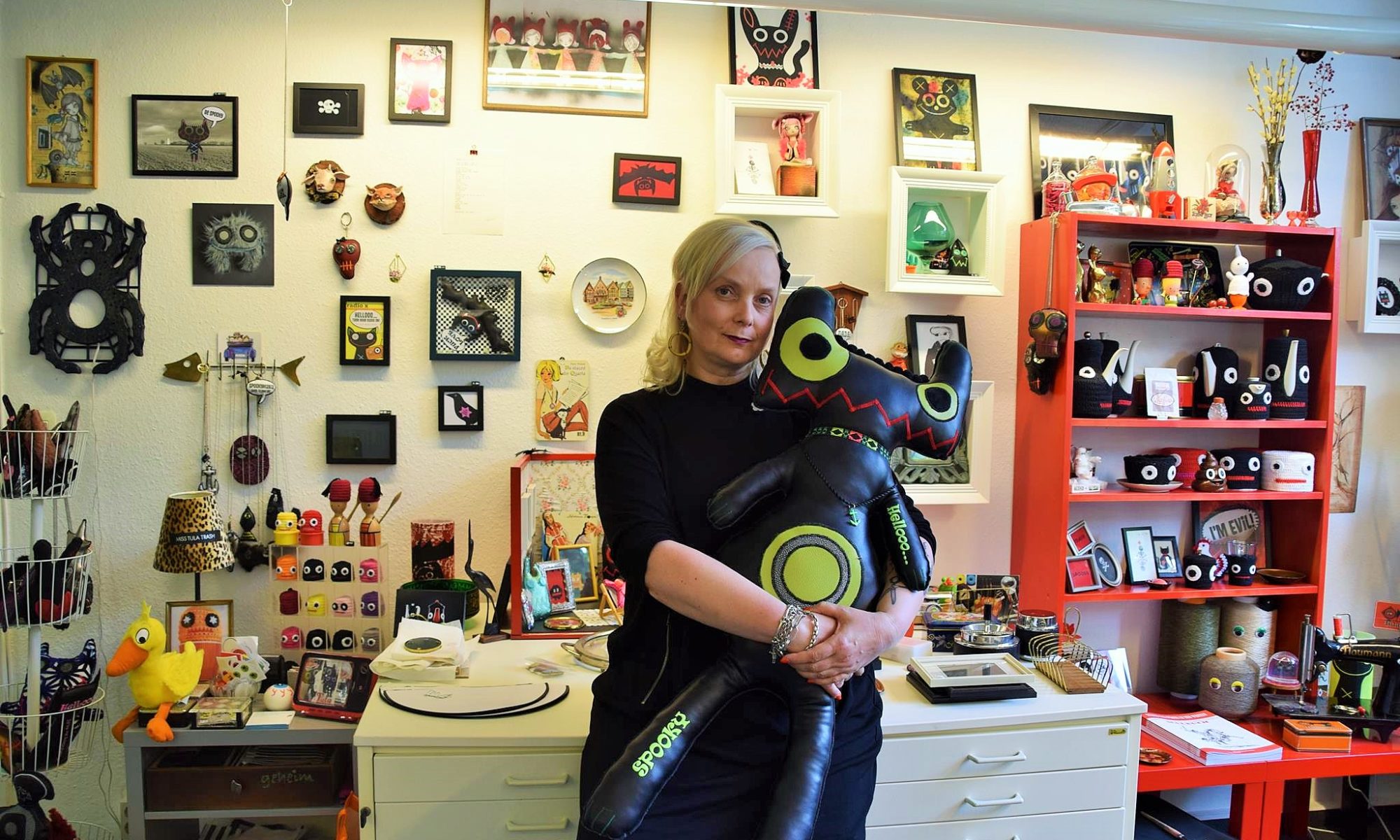 Once upon a time in the Frankfurt district of Höchst, hidden behind the seven refineries and factory towers, there was a funny cult magic land in the middle of the old town, full of funky colorful stuff gnomes …. Miss Tula Trash’s Trashland! A fairy-tale allusion as an intro, but when entering the initially unremarkable art studio you really dive into another world. This is where the cute-freaky Spooky Monsters with all their inventory live, and there is also a time-lapse into the 50s or 60s, through which interesting objects from that time appear again and again. Who did that? Miss Tula Trash, and this person had to be interviewed.

At Tula there’s creative art and fashion of a different kind, something black, because spooky, but actually colorful and adorable. The little dolls are all hand-made and each a unique piece, beyond that, the variety of ideas on products from this universe are no limits. From potholders, over woolen hats, to pillows, teapot warmers or toilet paper hats. Tula tailors, knits, sews and tinkers with wool, leather, fabrics and what just falls into the hands and fits in perfectly. It creates the most amazing and wondrous creations, these Spooky Monsters multiply a few times a year. Of course, the little figures also need their own living space and so the walls and shelves in the Trashland are decorated with collages and dioramas, in between old sewing machines, a toy shopping store, bizarre, creepy-nice, funny and a lot of “trash”.

[Duden]: “Trash” (træʃ /), noun,  [the] direction in music, literature and film, for which deliberately banal, trivial or primitive-looking content and a cheap style are typical.

In the Trashland there are regular events with different art contents, from exhibitions with musical accompaniment to readings or lectures. Everything can happen in Trashland. And who knows what the little Spooky Monsters do when there’s nobody around at night. Tula is sure they are responsible for the loveable creative confusion. In her workshop, work supplies disappear mysteriously and reappear somewhere else. Probably it’s just the normal-artistic chaos with a huge wealth of equipment, materials, fabrics, cloths and handicraft. Just as it should look like in an artist’s workshop. But still…. these little Spooky Monsters laugh so mischievously. So, maybe they had concocted something …

Between the mini-scenarios and Spooky Monster living rooms hang and stand also a lot of pictures and works of friendly artists and colleagues. A family network is important for Tula, together you can put together beautiful things, support each other and also present the others with you.

Tula is also involved in a variety of arts and cultural events, such as The Haunted House of Gallus at the Halloween time, where international artists will be exhibiting for several weeks, or the cooperative project with heaps of wonderful artists at the OF / FFM Co.nnection.

Often Miss Tula Trash is also behind the mixer and preferably puts on rock n roll, at the Moonshake parties comes before or even at X-Fade the DJ Night of Radio X. For the station, she also has a cover for a month’s issue designed. Of course with Spooky Monster. We had Tula in the studio to guest, in the interview you will learn more about the Trashland and upcoming art events. The podcast is in German but in the following there are some passages of the interview written down and translated into English:

You are active in many areas, but I got to know you a few years ago through the art at Lola Montez, with your stand with the little figures.

Exactly. They are from my trash country. So these are also mostly when I go to event my own creations. These are the Spooky monsters. They are now available on paper, on fabric, as Art Doll, on postcards, as wrapping paper, as badges, et cetera. This is meanwhile a huge family and always once a year or twice, as then new associates slip into it. Then they multiply.

But you also have a headquarters, an art space that you can visit?

Yes, exactly, that’s in Frankfurt Höchst. There I am now for three years, that was now in September three years. Before that, I was in Bornheim, where I had my studio for eight years, in Bornheimer Landstraße. And yes, through the design course is then 2012, so the end of 2012, then again the love for maximum awakened. I’ve lived there before. Had then with the Kerstin Lichtblau 2013 also in the Emmerich Josefstraße a small producer gallery under the name “Lichtblau & Trash”. It was already clear, if I like to do something again, then I would like to do so in Höchst. And in September 2015, that also happened.

I also thought it was funny when you asked if we had a parking space. Because then you meant: Yes, then I can drive up with my “Trash Mobile”.

Exactly. This is my orange trash mobile. That was a bit smaller before, now it’s a bit bigger. Because there I can just load everything in when I go to certain events or anywhere else. For example to Cologne or to Mainz, and there has to unpack something. This is also totally decorated in front. So who’s looking at the trash mobile times, then also knows: This car belongs to Miss Tula Trash.

You have your own store, the Trash Land, but you also organize many events and offer platforms for other artists.

That’s right, so there’s the Haunted House of Gallus once a year. This takes place in the BePoet action room in Gallus. This has been very well established for several years. We have the fifth exhibition this year. It is also an exhibition that is always very international because I always try to get people from other countries to join me as well. It’s just for a very short time to see here in Frankfurt. Usually only over two to three weeks and shows just by the fact that it takes place at the end of October, so almost takes place on Halloween, then art, which is very spooky and very trashy. So things that you do not find on every corner.

After a telephone interview with the International Theater and the YokYok: Nice, as they had described, like a small art family. That’s similar with you too.

Yes, it also reminds me a bit of our events, that we are always such a small family. That meanwhile also with us not always the same participants are there, but that it is already also a network with people, which one knows already over 10 years and which are still busy at work and always have new ideas and that is just great.

Especially in a city like Frankfurt, where everything is capitalized and thoroughly commercialized, it is important to build a network and tackle things together.

Yes, it is especially important that platforms are created for young artists, where they can present themselves, where they do not have to pay dearly to pay for any expensive event. My heart is always bleeding, because I always think that the young artists, who actually need their money for their material, for their art. And not to pay any contributions for any exhibitions. There should actually be much more such platforms in Frankfurt. For example, we try this with our exhibitions, whether this is the Haunted House or the OF / FFM Connection. That one is actually always on such a, for us why a “low budget” is, but still something great out of it conjures.

Frankfurt is not as big as maybe Berlin, there are not that many people with whom you can network. But then you can then network better with the real makers?

Yes, partly in part. It always has to fit. It is also true that not everyone always has the idea or hops on this or each. It just has to be right. The people we have found in the meantime, or those who come back again and again, it just fits. And those who do not fit, then they have only once participated and then do something else. But it is always a very nice family and it is always a very good atmosphere with us.

The the event which is happening every hear is the OF / FFM Connection.

That’s just such a baby of ours, this will take place every year since 2013.  This will take place one time in Offenbach and one time in Frankfurt. We connect and switch places to connect. Sometimes in Offenbach in the apartment e.V., one thousand thanks to the dear Gogo that this so often could be made possible and we are looking forward to it. There will also be a nice supporting program, we are every time looking forward to this event.

You do so much, for example music. So you also hang up and organize the moonshake parties.

So the organization makes the Laiki. I’m always so part of it here. I love Rock n Roll and Rhythm & Beat, some 60s too. So now in what I do, it’s mostly rock n roll and rhythm and beat. The sixties stuff I leave to others. It’s not like my world, I really love rock n roll. On the DJ Night here on the radio, I’ve already hung up and that’s where I started. I have to admit, I’m not such a psychedelic fan. That’s why the late sixties are not really my thing now. For me it’s the 50s and early 60s, that’s my world.

As shown on the cover picture, the Spookymonster can sometimes become “something” bigger, very nice! And there are two videos from two of these fabulous events. Very recommendable to visit.