Loud bass on dance-loving raves with lots of color and decoration. DJane and event organizer AnniMalisch sets up such parties and visited us in the studio of Radio X. She also brought her fresh X-Mix-Techno-Set. In Frankfurt she organizes events such as “Paint it Blacklight” and “AnniMaliscHe Triebe”, is playing at festivals throughout Germany and has put on the TagTanzDemo a decent program. Her parties are always colorful and the passionate decoration creative is investing a lot of time and effort in her projects.

On the “Paint it Blacklight” – events there were already often fun color massacre with self-made, ecological and washable color, which fluoresces fluorescently in the black light. Of course, the entire party location was lit with UV lamps just everywhere. Anni had collected for weeks in the environment and from friends and tried to install as many black light lamps as possible. For outdoor events, such as the TagTanzDemo, a complete mobile DJ console with sound system is easily built together quickly. 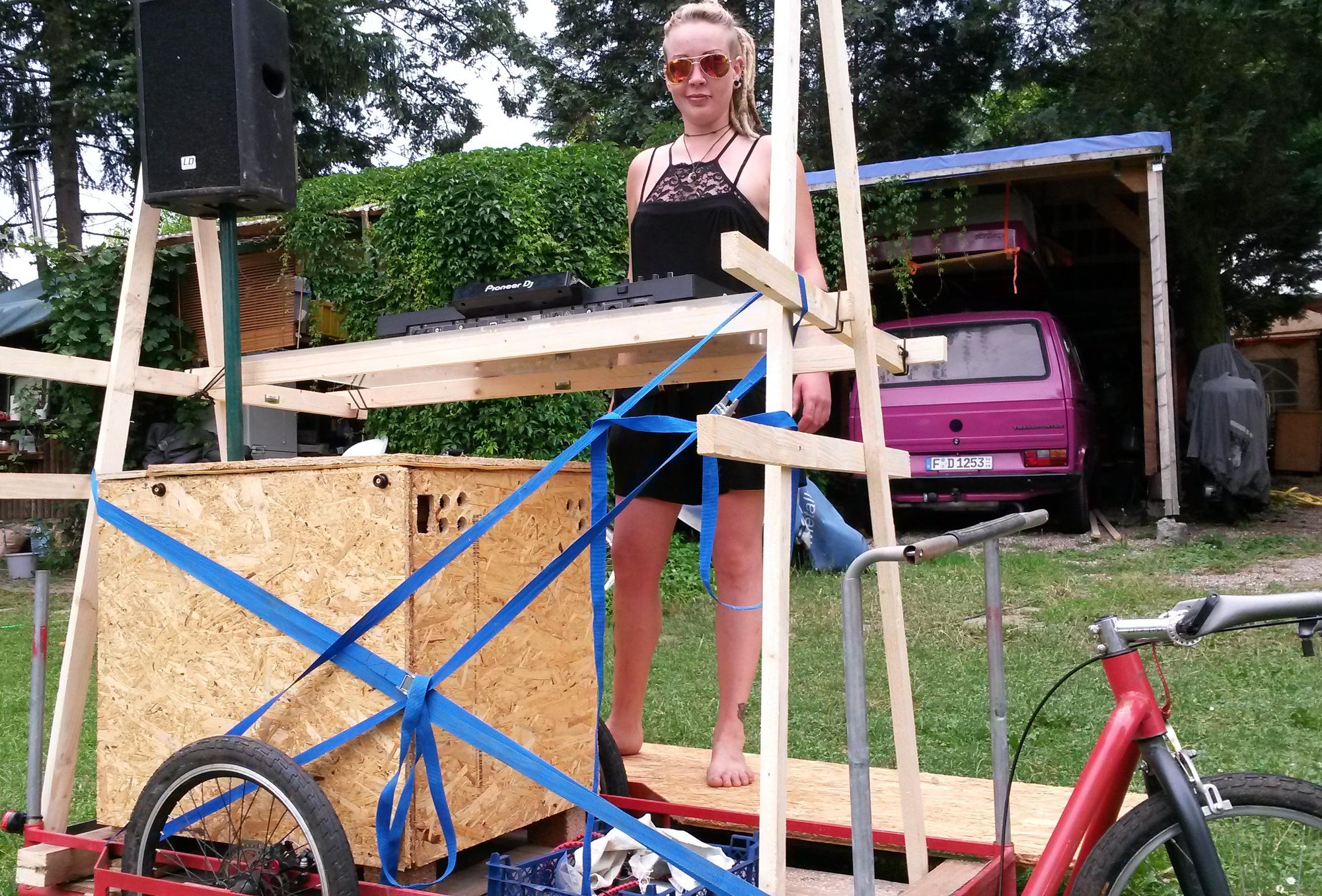 In the interview, AnniMalisch tells us how she came to techno and developed her style and her doings. She speaks about her parties, the electro scene and the critical handling of and through the music. The interview is in German. In the background run the two sets that she had specially mixed for the show, the music sequences were left in the podcast. You can find one of the two sets without talk below or here: Radio2.

Summer has just begun and there will be some great parties and raves in interesting places and outdoors. DJs, visual artists, craft friends and music enthusiasts are welcome to contact AnniMalisch (see Infotheque at the end of the article). Below we have some passages of the interview. In between you will find sets by AnniMalisch.

For you, the party is not just the music, there is also the decoration and the trappings, you also like Goa. Since when do you do techno and music?

Techno has interested me in any case for a relatively long time. But I’ve been working on it intensively for two or three years and got to know it all with the digital hang-up. The neon, the lights, the crazy decoration on the Goapartys, I always found it totally awesome. And I still did not know why you could not combine that with other music. Because colorful and shine, I think everyone is happy about it. I then started with the theme parties, because I wanted to do something different, which is flashy, which is fun, where you can hear good Mukke and is also visually a bit addressed.

You said earlier that you could play with any kind of equipment. You have gradually acquired the individual skills to deal with a variety of devices.

I used every opportunity to try everything. I would not say that I can do everything, but at least I know all the stuff. Because simply the interest was always there. And if there’s a chance to try something out, that’s another program, different consoles, different controllers, different turntables, different mixers or whatever, I’ve always used the opportunities. Because it’s all a kind of instrument and it’s also incredibly fun to get to know new things and it just makes everything easier or better and you grow with it.

To organize outdoor partys has also become much easier.

Yes, everything evolves. 15 years ago you only had the opportunity to transport your turntables and mixer, plus huge boxes and huge PA somewhere to rave and have fun with good and loud music. That’s all so minimalistic by now. You do not need a laptop anymore, you can just put the console in your suitcase and only need one or two sticks. Then you have tons of music on it, 60 GB or more. Since I can day and week the people radiate and “verballern”, if I’m horny. It makes many things a lot easier. So making music somewhere out there. Everything just in a small suitcase. The boxes, too, are getting smaller, more manageable and the sound is getting better.

What is the Artificial Family?

So that’s in Mühlheim, direction Hanau close to Frankfurt am Main (Germany). Most people may know the Green Lake and the quarry. Artificial Family is a cultural association that organizes various events and offers a variety of activities. The terrain is totally cool, a super beautiful outdoor area. There is a pool filled with sand, where you really have a little beach feeling. There is a huge stage with the forest around it, the lake is just around the corner. But it is a nature reserve. You have a really relaxing fire pit, in case of cases, the hut is still there. There are toilets, electrical connections, meanwhile a fixed tent was built outside, in case it rains. There are really many possibilities to do really nice things through this close to nature. The Augen & Ohrenbad is also a nice party where people work a lot with visuals and decoration. Lots of light, because I am also a great friend of. Everything that shines! 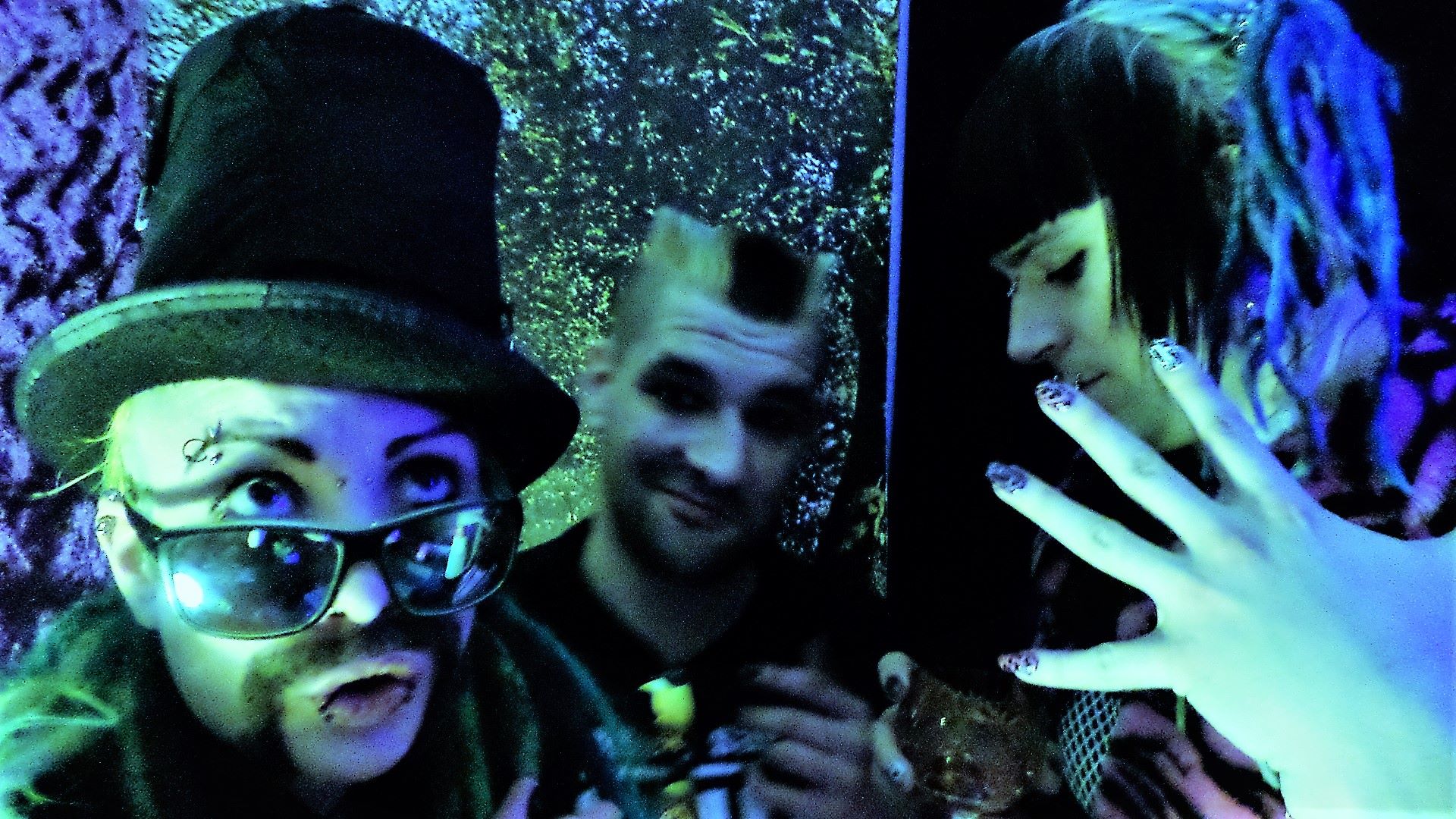 You said that so well, if you take a DJ who has learned it all before, you can put him/her anywhere. But with DJs who are only familiar with the new equipment, that looks again more difficult.

Yes, you have to work with your hearing. If you put it on vinyl, you did not have a BPM ad, there are no waves or anything to look for. But then you listened to every record you own a million or a billion times. You know them by heart. Also financially it is something different to buy the vinyl records, than to download a few tracks from the Internet. You just had to work with your ear and not just hit the sync button and spin cogs, which definitely has something, because you can focus on the transition for a while and practice it especially. Nevertheless, I find that something is lost, because you just do not have to work with your ear due to this “syncing”. You have to train your hearing and you have to learn to listen out, is the record faster now or does it slow down or how do I have to adjust? You certainly have to have a certain talent or ear, that’s clear, but in spite of all that you just have to practice it. If you do not do it then you lose your hearing again. Of course, if you’re busy with it, you’ll get better, try techniques, and learn things.

Explain briefly, what does B2B or Back to Back mean?

What helped me so much was playing with other people. There were definitely some DJs who have been making music for 10 or 15 years and who have brought me on a blatant course, just playing back to back. Because they also bring in a completely different music. So Back to Back actually means “together”. For example, two people playing alternately. There you can play Ping Pong, so everyone plays a track. You can do that at will. When everyone plays a track, you make the transition from the foreign disk to yours and vice versa. That makes it exciting, too. Above all, you can also watch: What technique does the other have on it, how does it work, how does it make its transitions. It’s definitely worth trying something out if you’re a DJ yourself and are open to such things because it just keeps you going.

You also put on the Tropic Tango Festival line up, or how was that?

This is definitely a pretty cool festival. I’ve been there for the last two years and it was so much fun. We were there with our clutter last year. So there’s a jam stage. And we ended up doing that, after the others were all over and the stages were more or less crowded. Down there we did some nice techno playing. There were a lot of people who had their fun. The people thought then, I’m actually part of the line up. But it was the jam stage, everyone could stand there.

You make music out of passion and out of the heart, because you enjoy it and also complain that there are fewer and fewer people who make things out of their passion and just run along with such a mainstream wash, whether music or art or culture. People become less critical.

Yes, techno is now mainstream meanwhile. That’s what every hipster hears. It was underground. The people were just different somehow. Be that now visually or at all, the whole celebration culture has somehow developed into the expensive and commercial.

We are almost finished with the interview, what is your main message? You said before: “Party Hard !”

Yes exactly. Party Hard! In any case. Just celebrate together, once again start awesome parties together. With pleasure also with political background. I remember well, more than 10 years ago there was one or the other techno demo that ran through the city and ended up in some big garden or something. For a long time I have been missing a bit of political thought from many people. I miss a bit of the claim to the music itself. As I said, also just celebrating together. Dancing, for the sake of dancing. If you just have fun, go for a walk and do not register in the dance studio first to learn specific steps to make it look as cool as possible. Of course it’s cool, if it looks cool, how to dance, you like to look at it. But in the end, it should be about something other than this show. 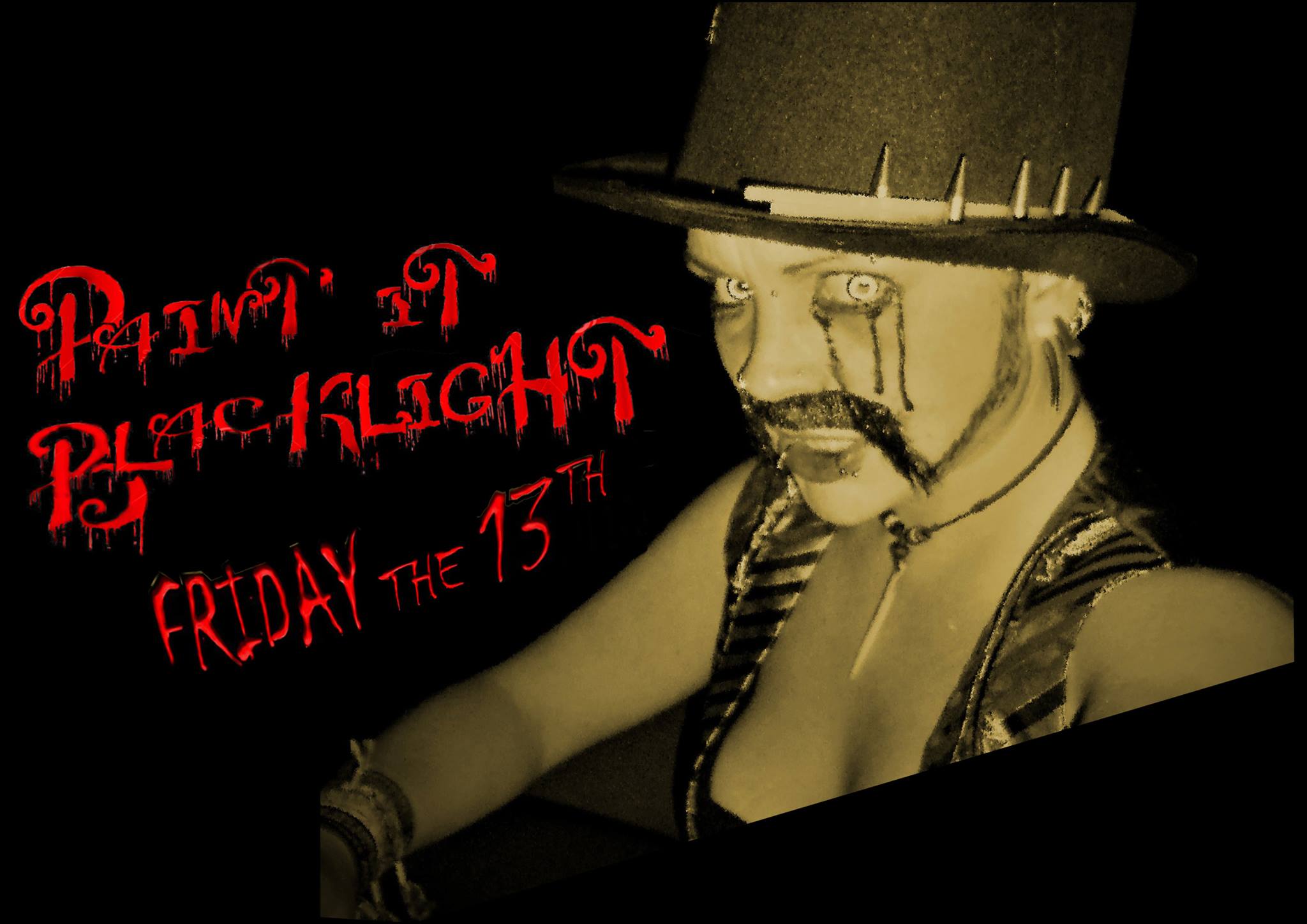 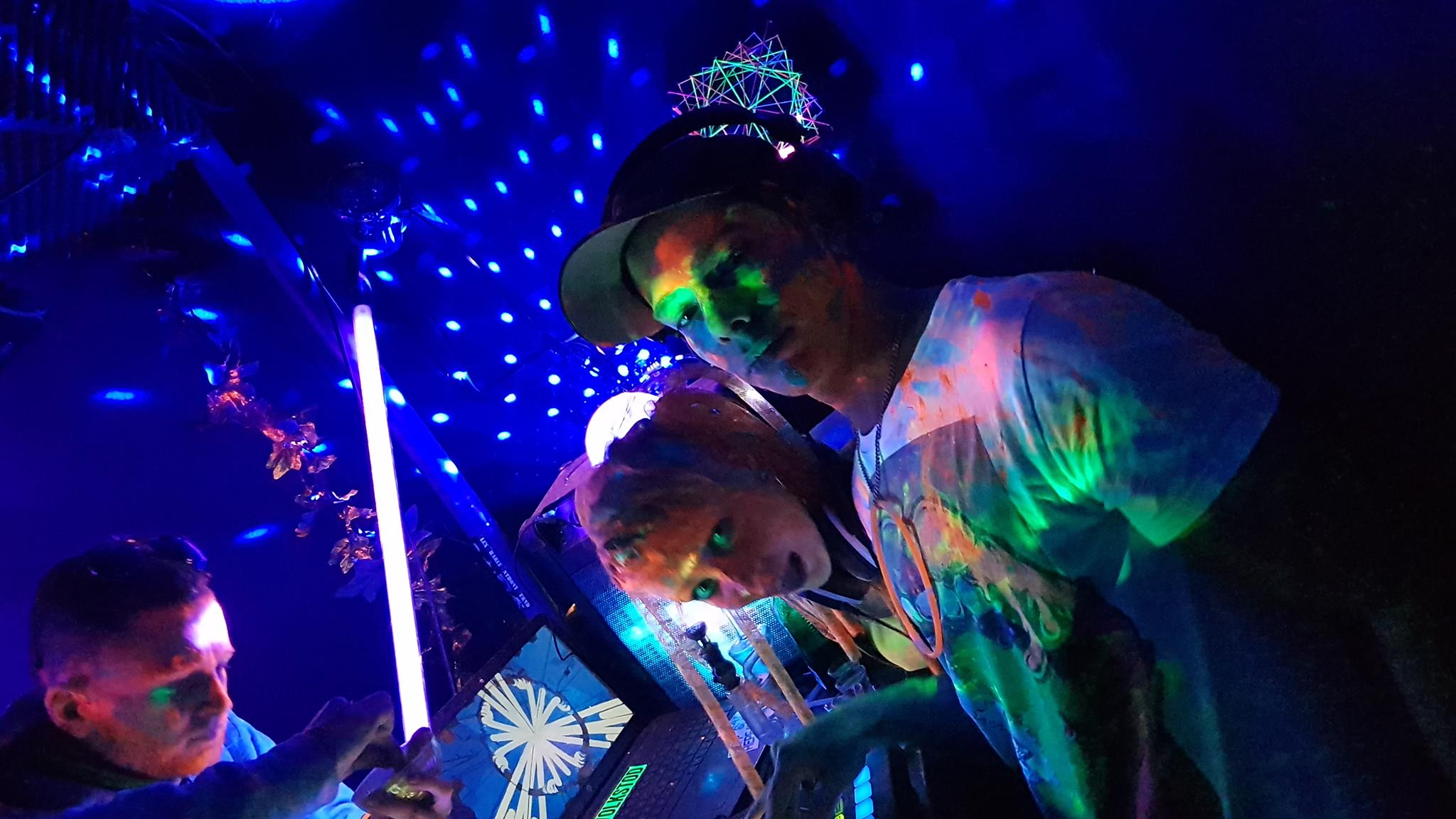