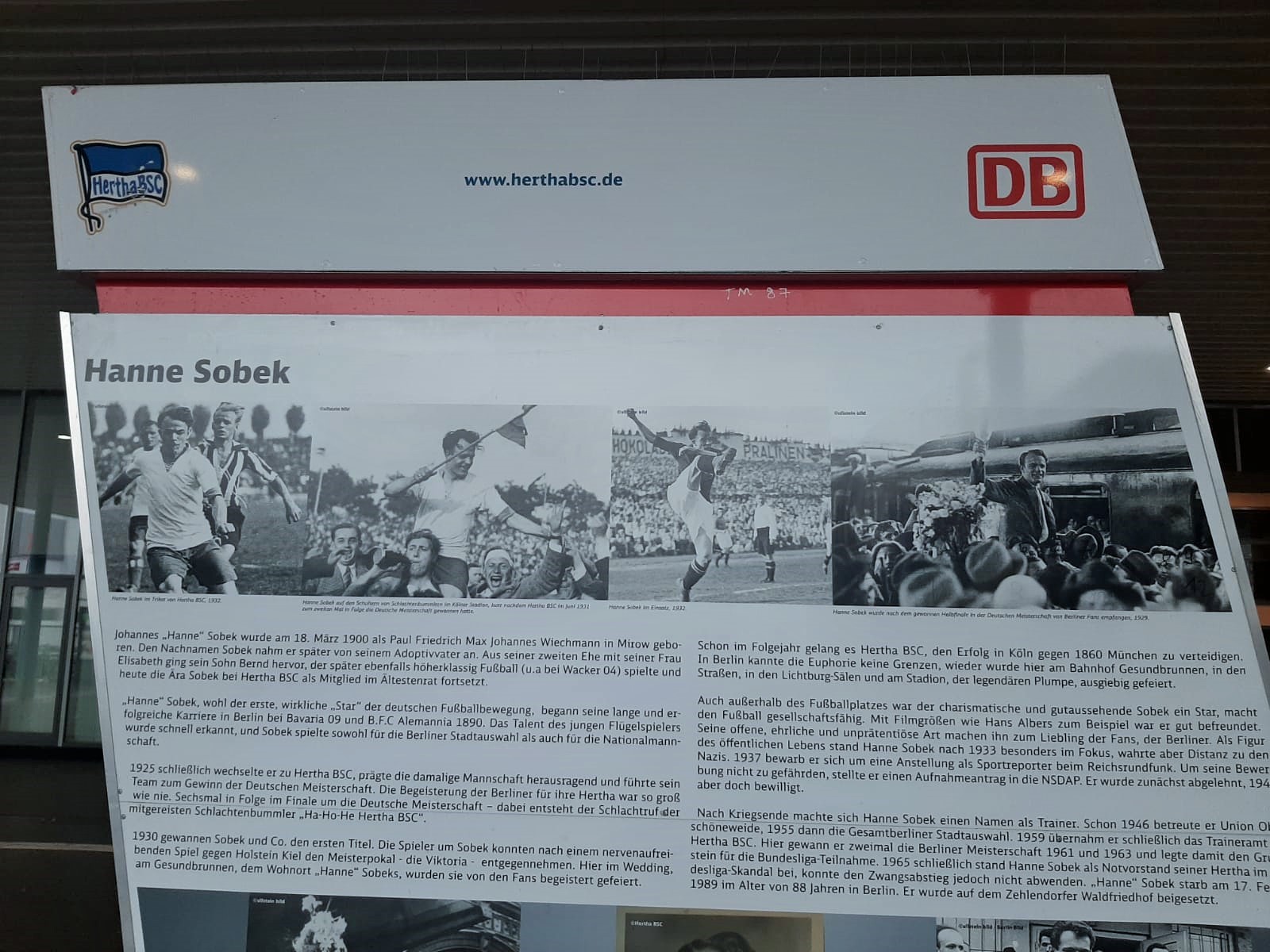 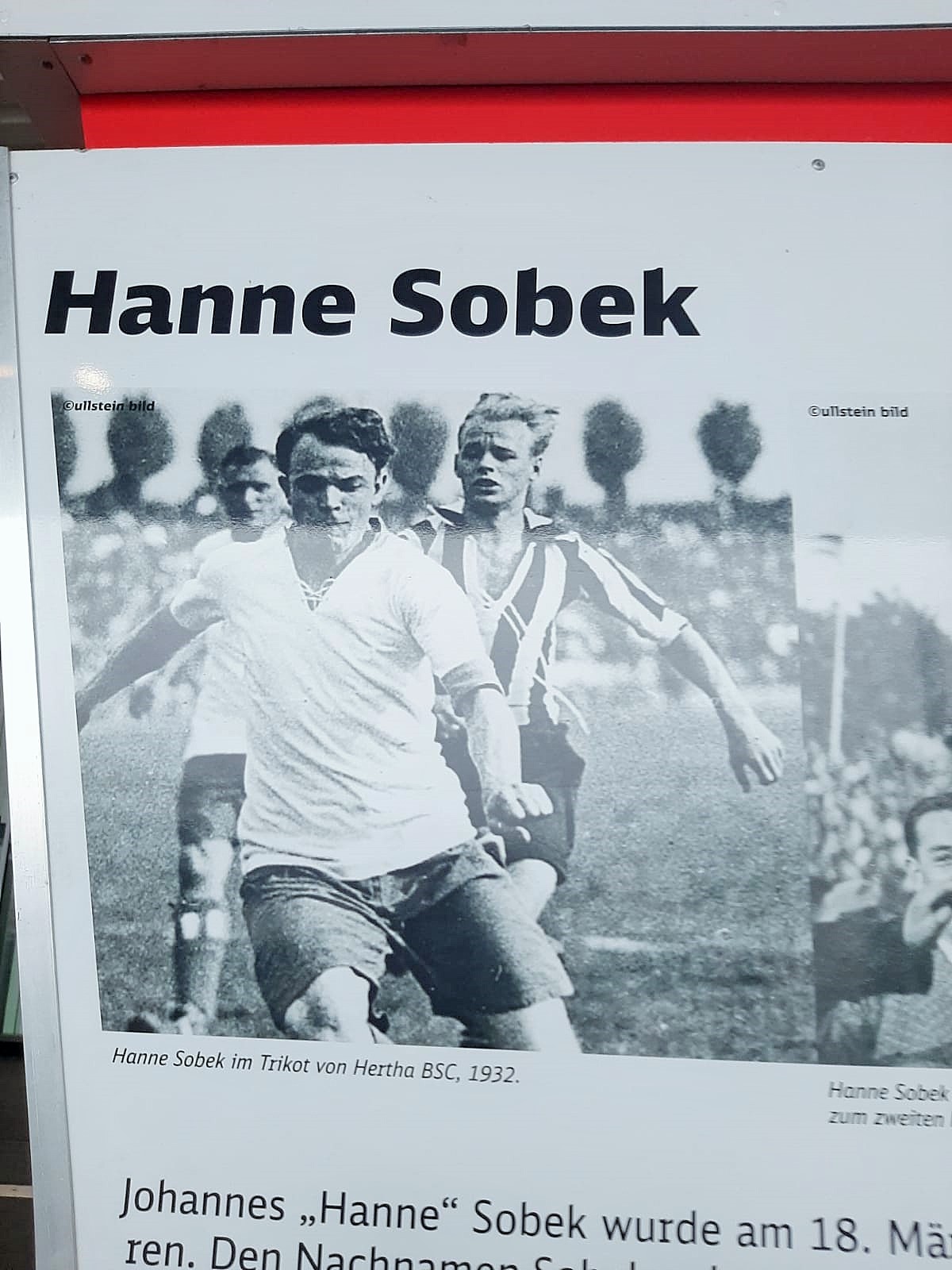 Johannes “Hanne” Sobek was born on March 18th 1900 as Paul Friedrich Max Johannes Wiechmann in Mirow. He later took the name Sobek from his adoptive father. His second marriage to his wife Elisabeth resulted in his son Bernd, who later also played high-class football (including at Wacker 04) and continues the Sobek era at Hertha BSC as a member of the council of elders. 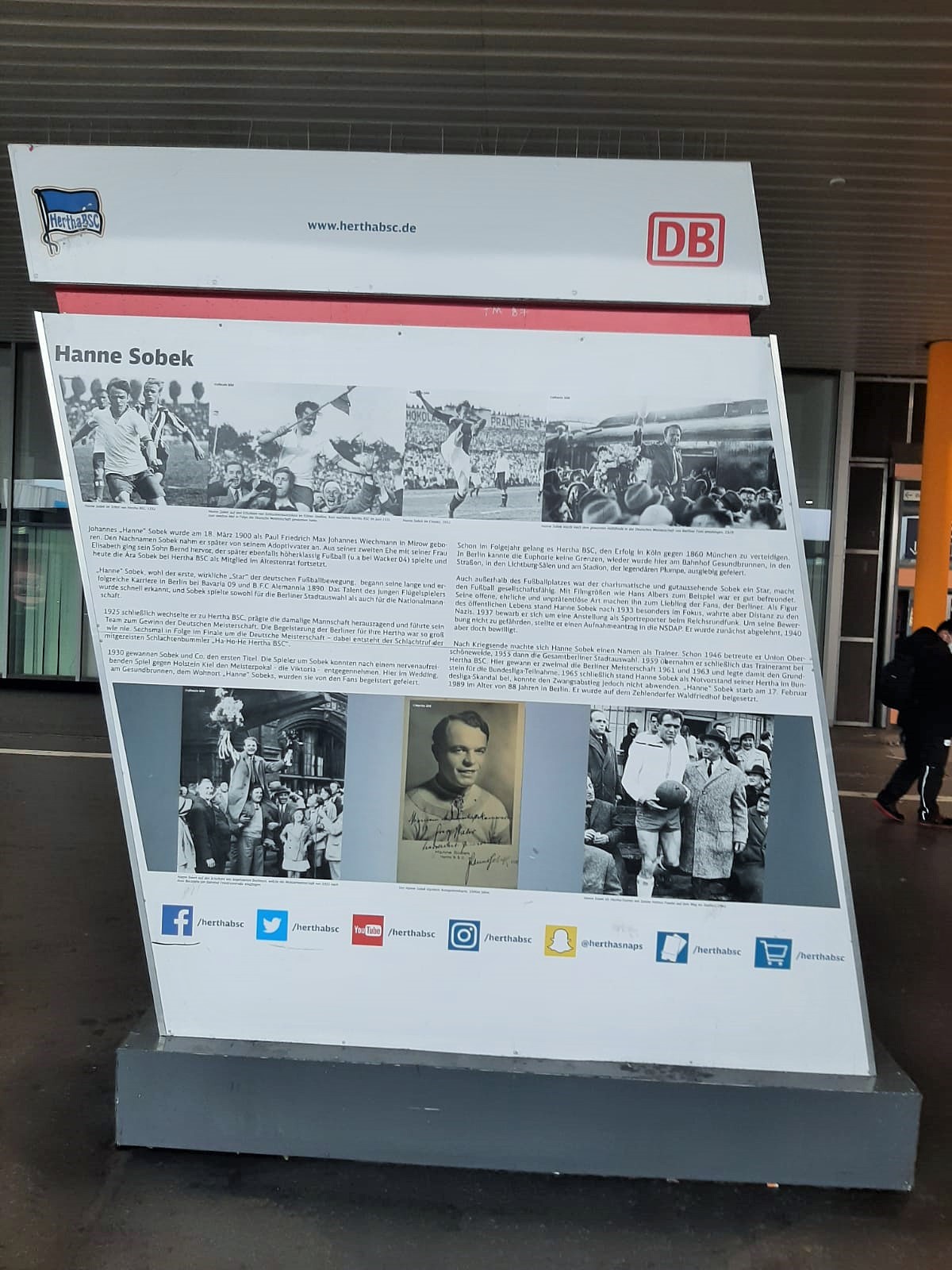 “Hanne” Sobek, probably the first, real “star” of the German football movement, began his long and successful career in Berlin with Bavaria 09 and B.F.C. Alemannia 1890. The talent of the young winger was quickly recognized, and Sobek played for both the Berlin city team and the national team.

In 1925 he finally moved to Hertha BSC, made an outstanding contribution to the team at the time and led his team to win the German championship. The Berliners’ enthusiasm for their Hertha has never been greater. Six times in a row in the final of the German championship – this is where the battle cry “Ha-Ho-He Hertha BSC” arises from the battle-strollers who have traveled with them. 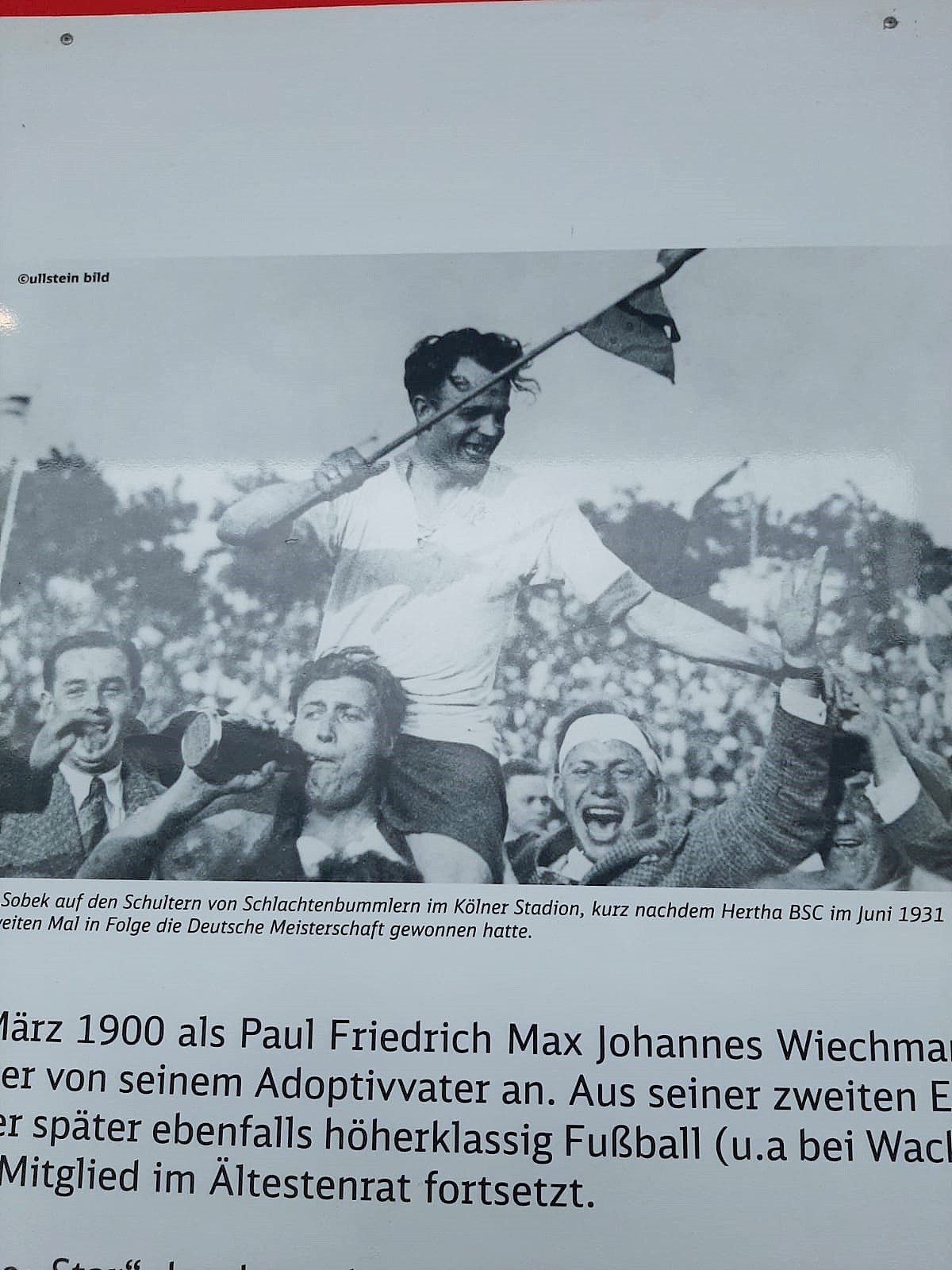 In 1930 Sobek and Co won their first title. After a nerve-wracking game against Holstein Kiel, the players around Sobek were able to receive the championship trophy – the Viktoria. Here in Wedding, at Gesundbrunnen, where “Hanne” Sobeks lives, they were enthusiastically celebrated by the fans. 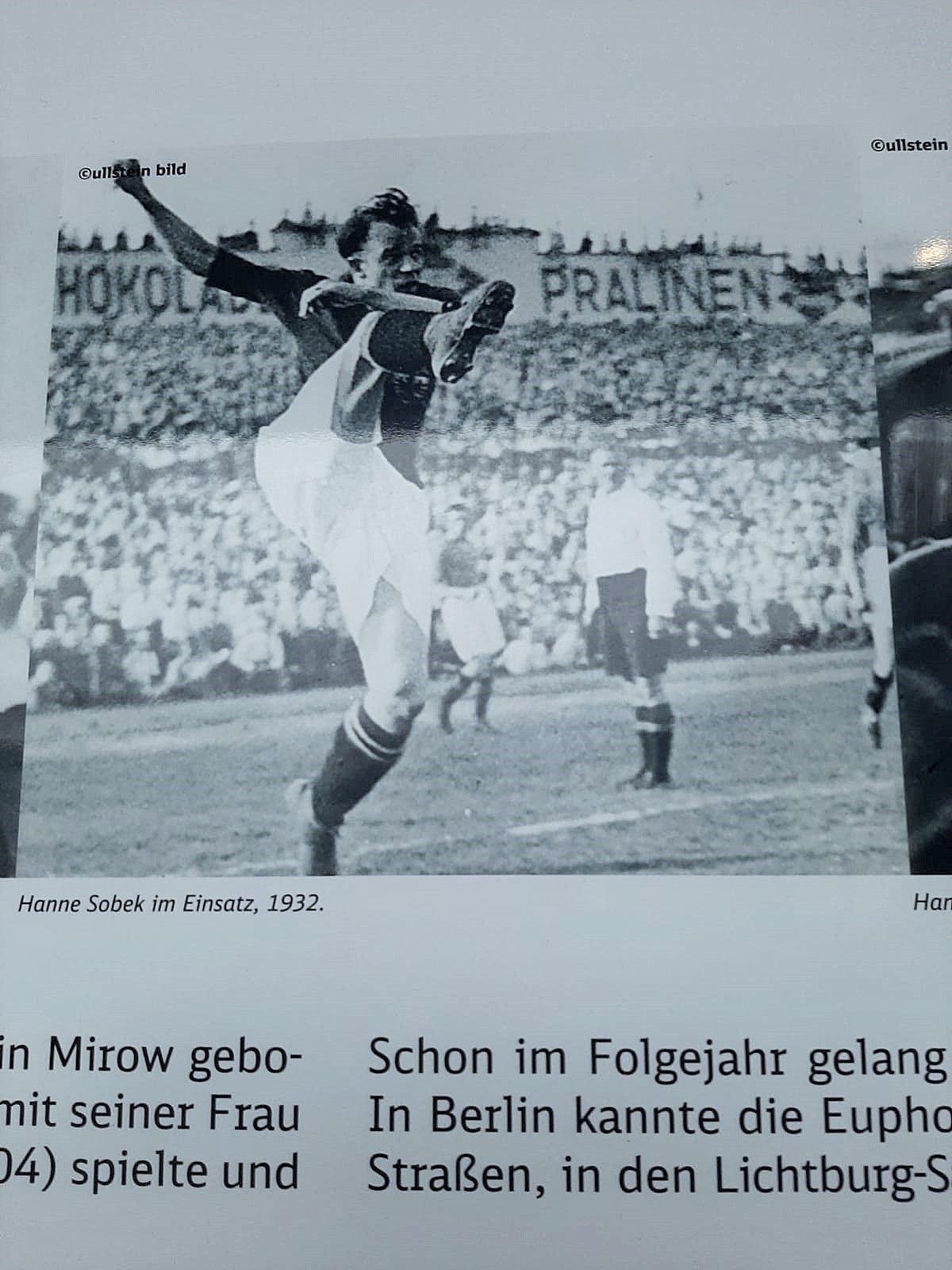 In the following year, Hertha BSC managed to defend their success in Cologne against 1860 Munich. In Berlin the euphoria knew no bounds, there was again extensive celebrations here at Gesundbrunnen train station, in the streets, in the Lichtburg halls and at Stadtion, the legendary “Plumpe”. 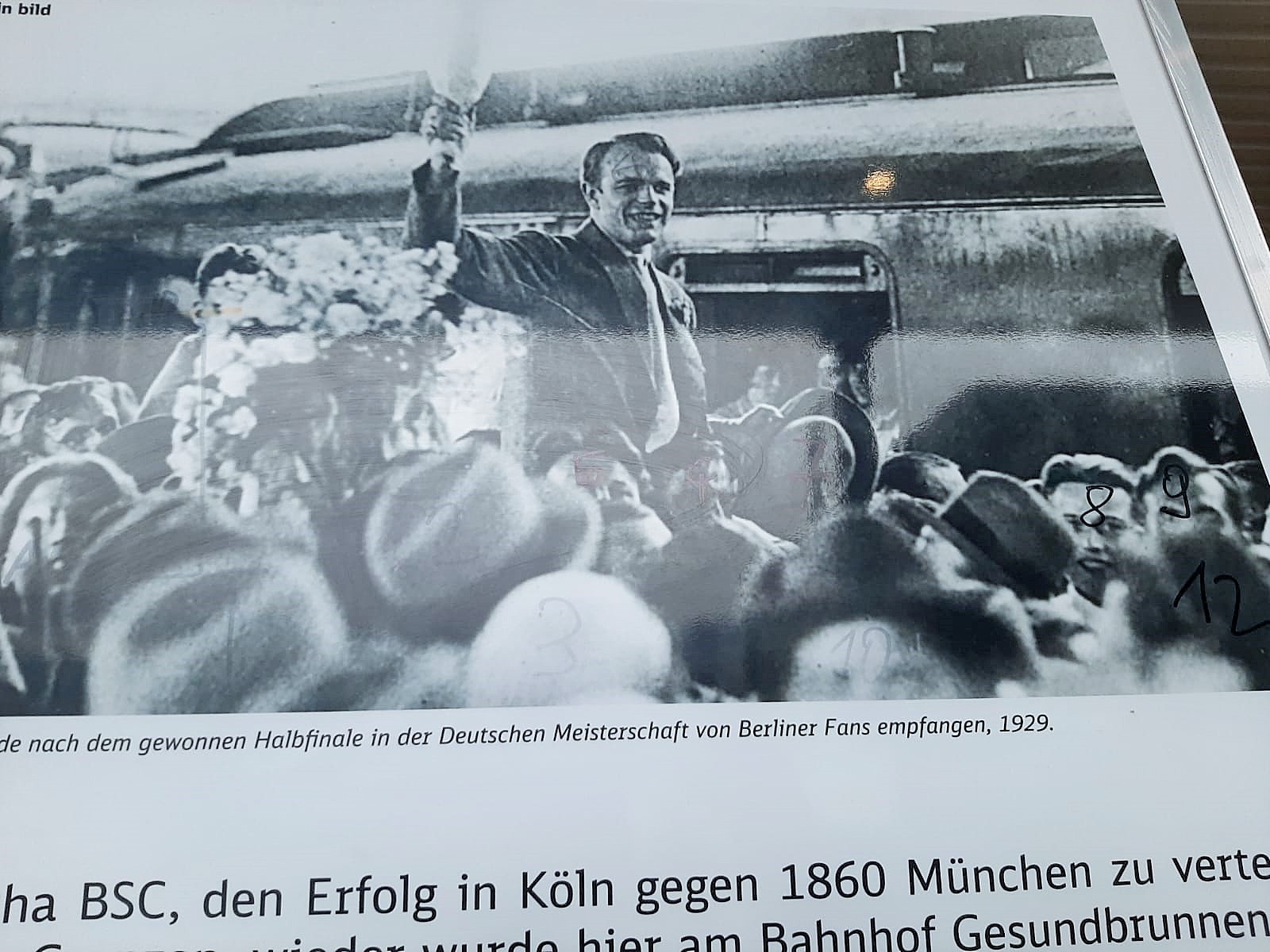 The charismatic and handsome Sobek was also a star outside the football field, making football socially acceptable. He was good friends with film greats like Hans Albers, for example. His open, honest and unpretentious manner make him the favorite of the fans, the Berliners. As a figure in public life, Hanne Sobek was particularly in focus after 1933, but kept her distance from the Nazis. In 1937 he applied for a job as a sports reporter for Reichsrundfunk. In order not to endanger his application, he applied for membership in the NSDAP. He was initially rejected, but was approved in 1940. 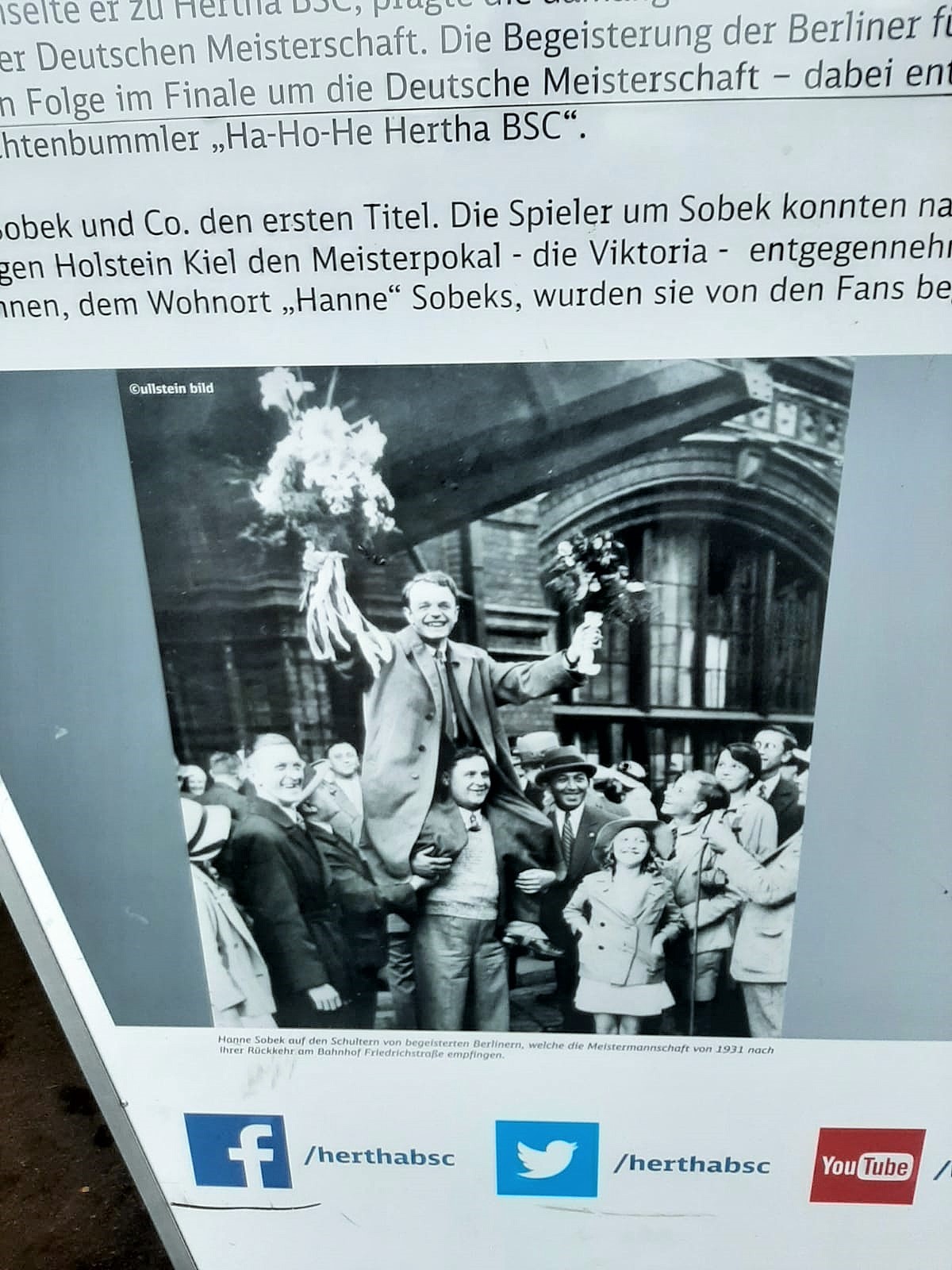 After the war, Hanne Sobek made a name for herself as a trainer. As early as 1946 he was in charge of Union Oberschwerde, then in 1955 the entire Berlin city selection. In 1959 he finally took over the coaching position at Hertha BSC. Here he won the Berlin championship twice in 1961 and 1963 and thus laid the foundation for participation in the Bundesliga. Finally, in 1965, Hanne Sobek was on the emergency board of his Hertha in the Bundeslika scandal, but could not avert the forced relegation. Hanne Sobek died on February 17th, 1989 at the age of 88 in Berlin. He was buried in the Zehlendorf forest cemetery. 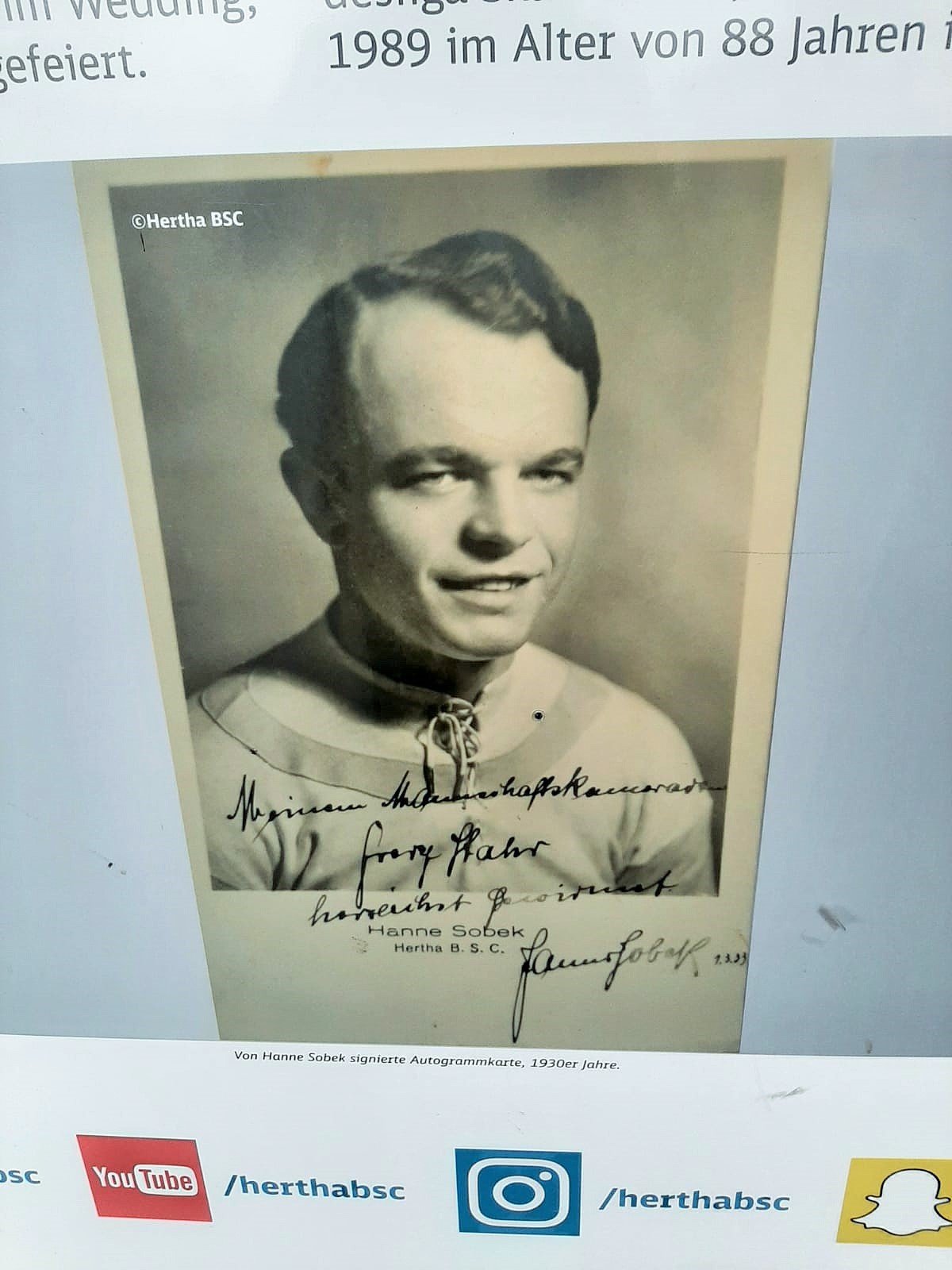 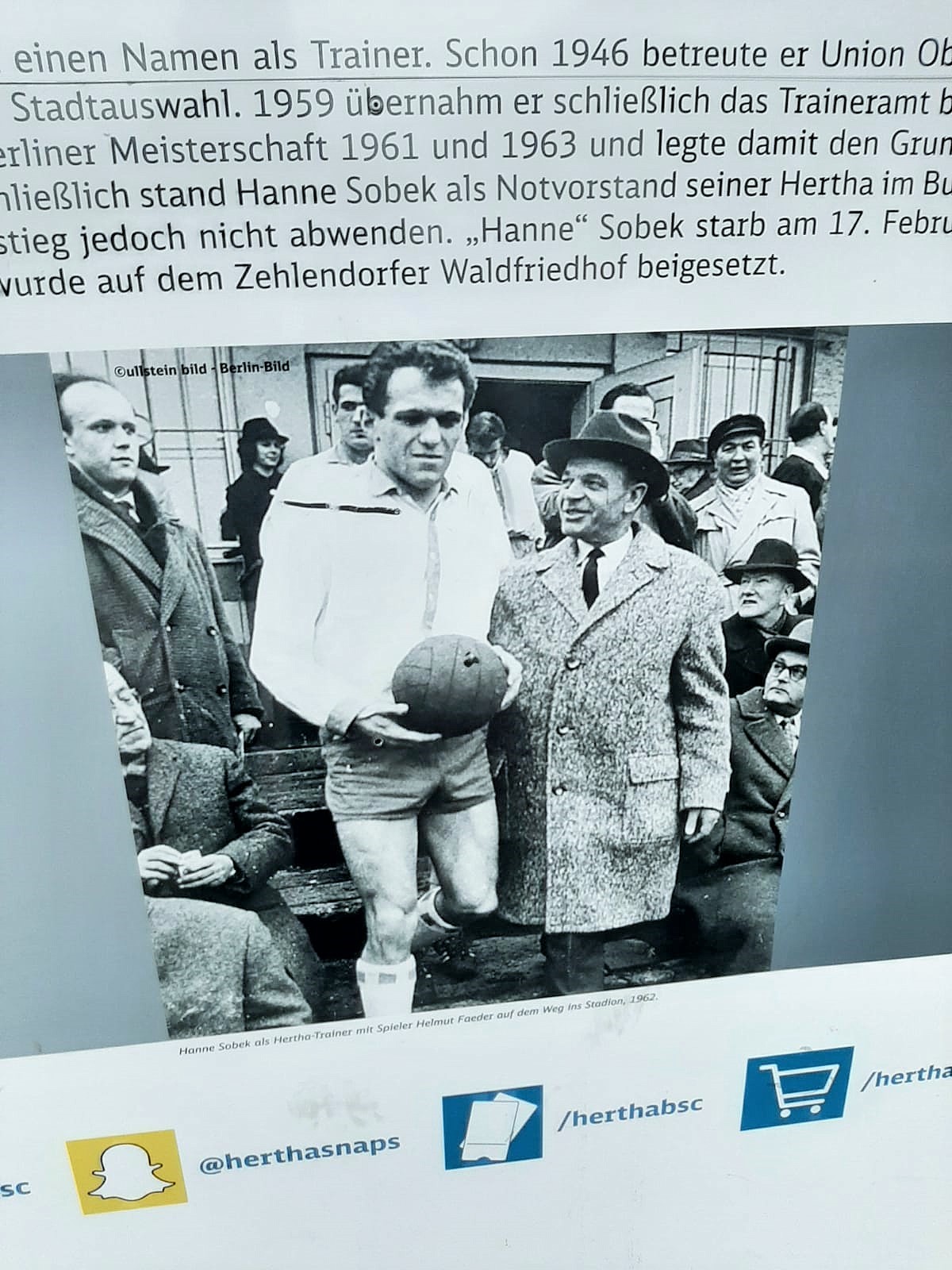 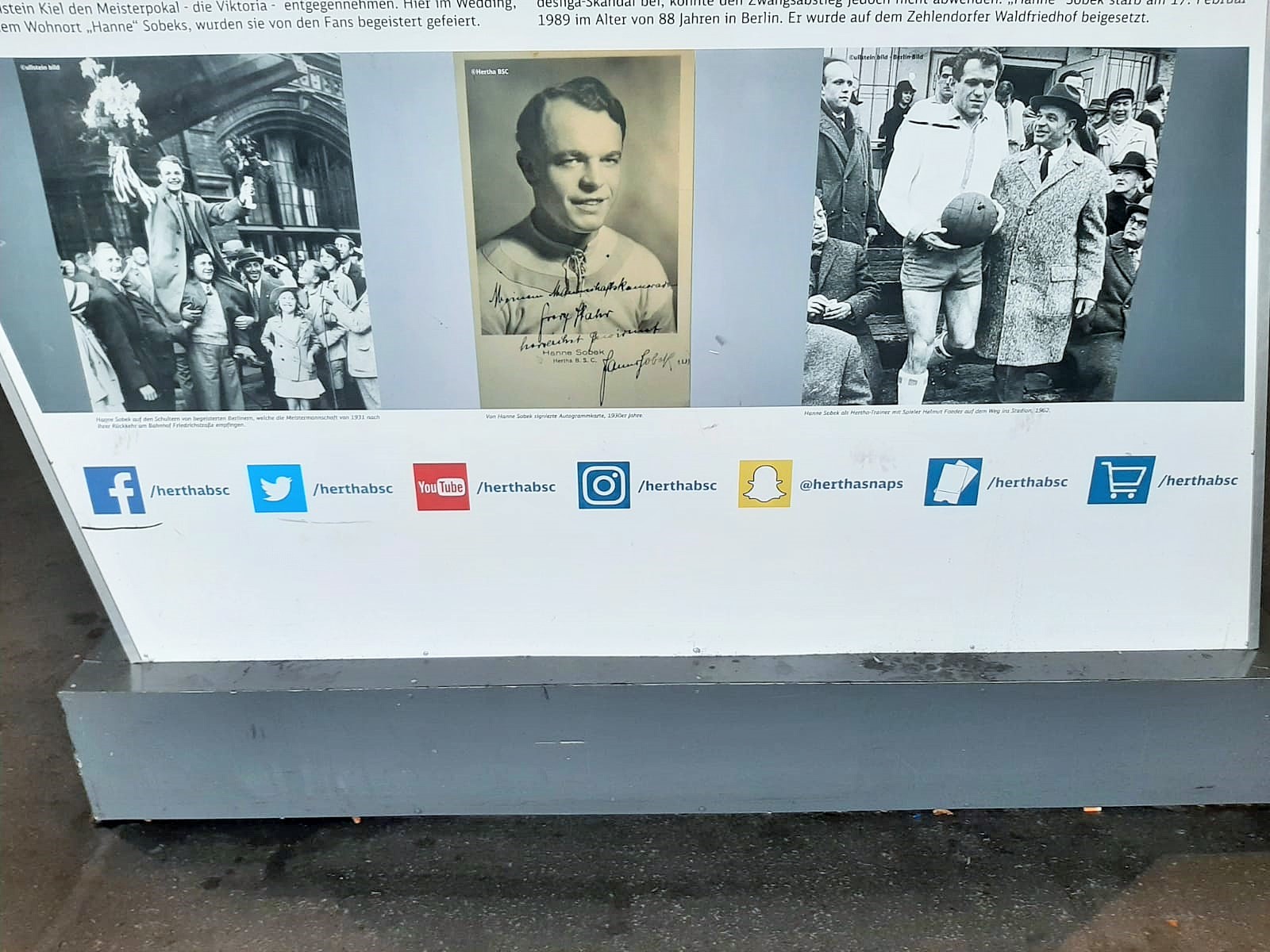 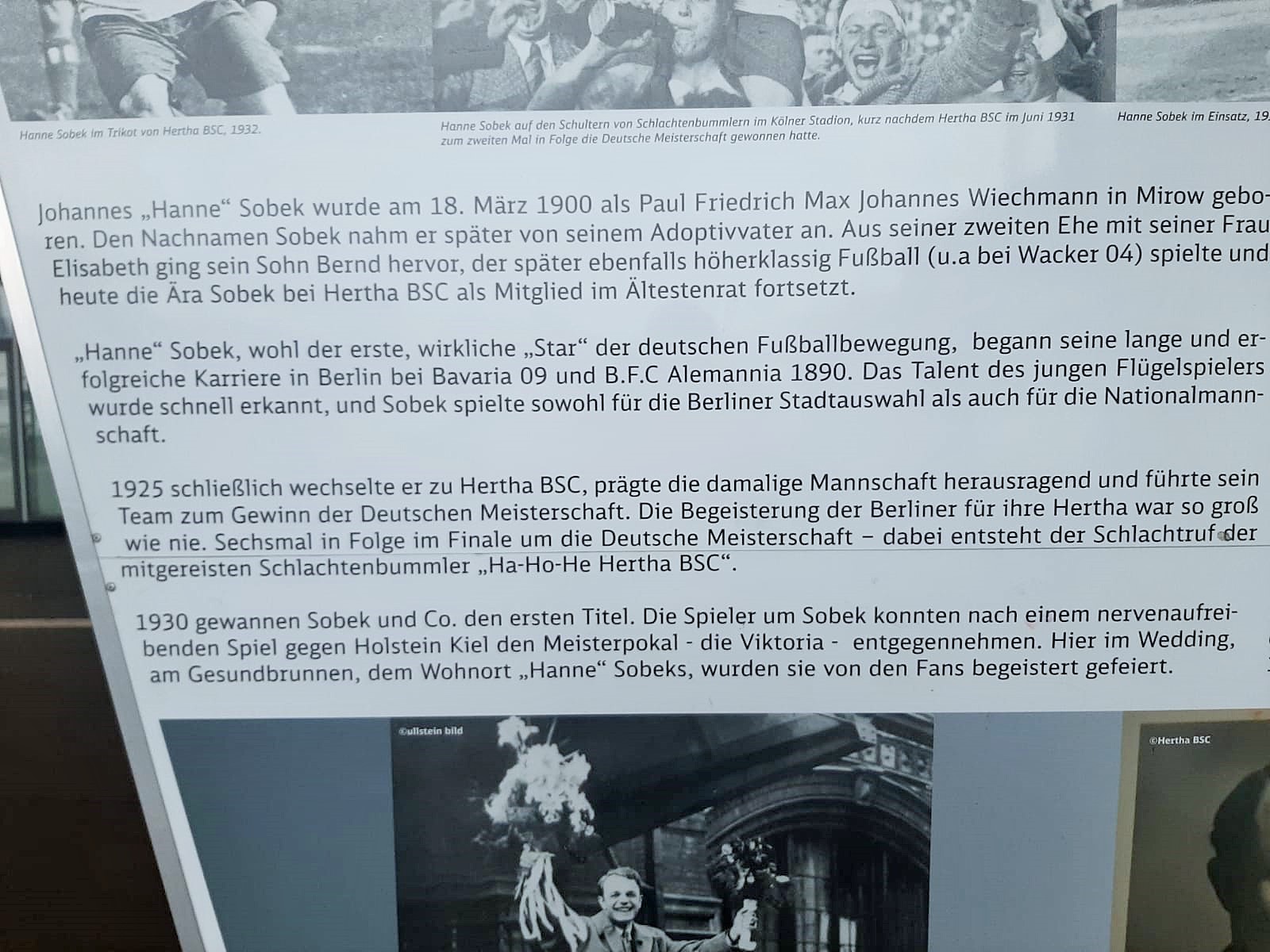 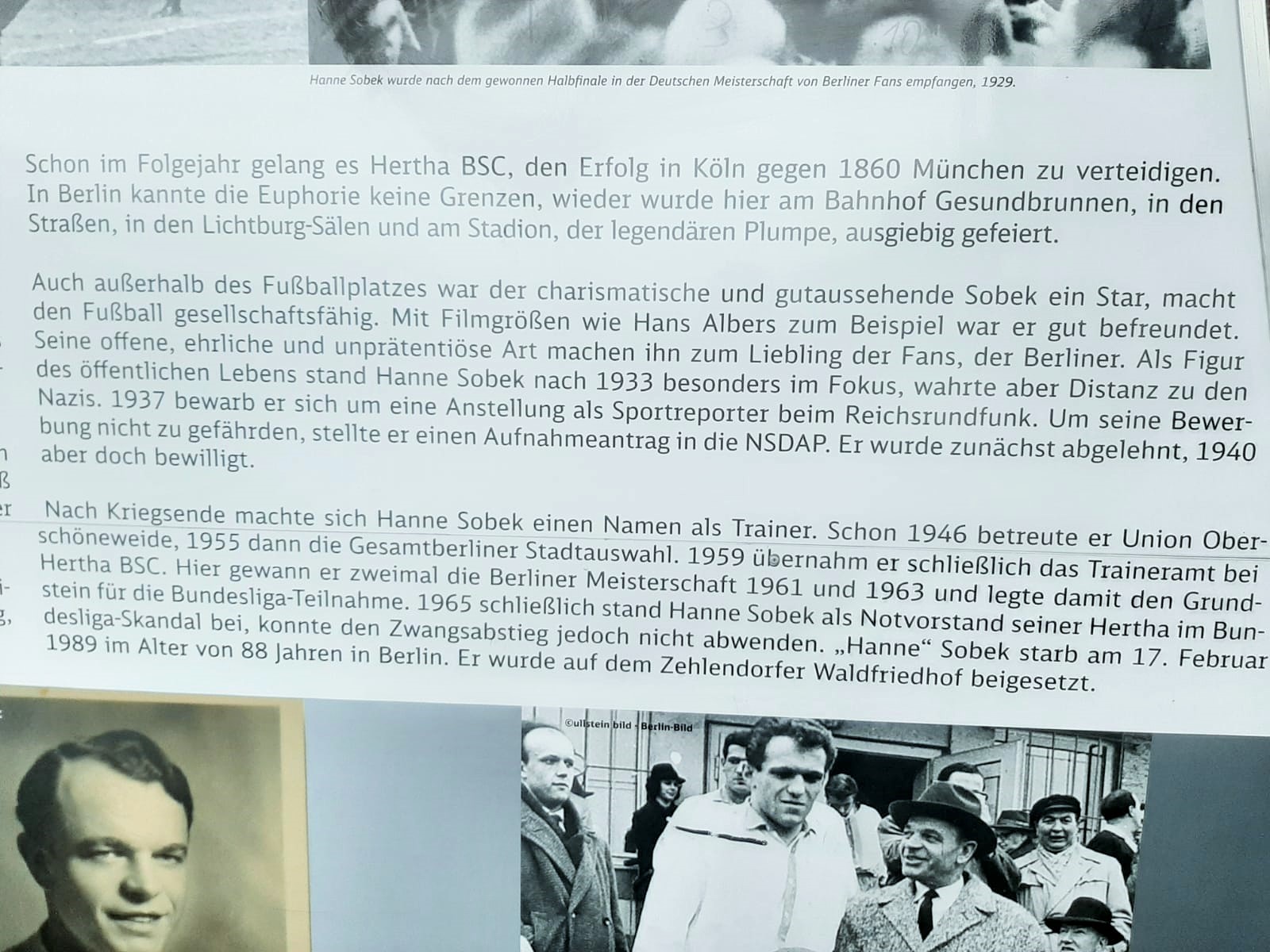 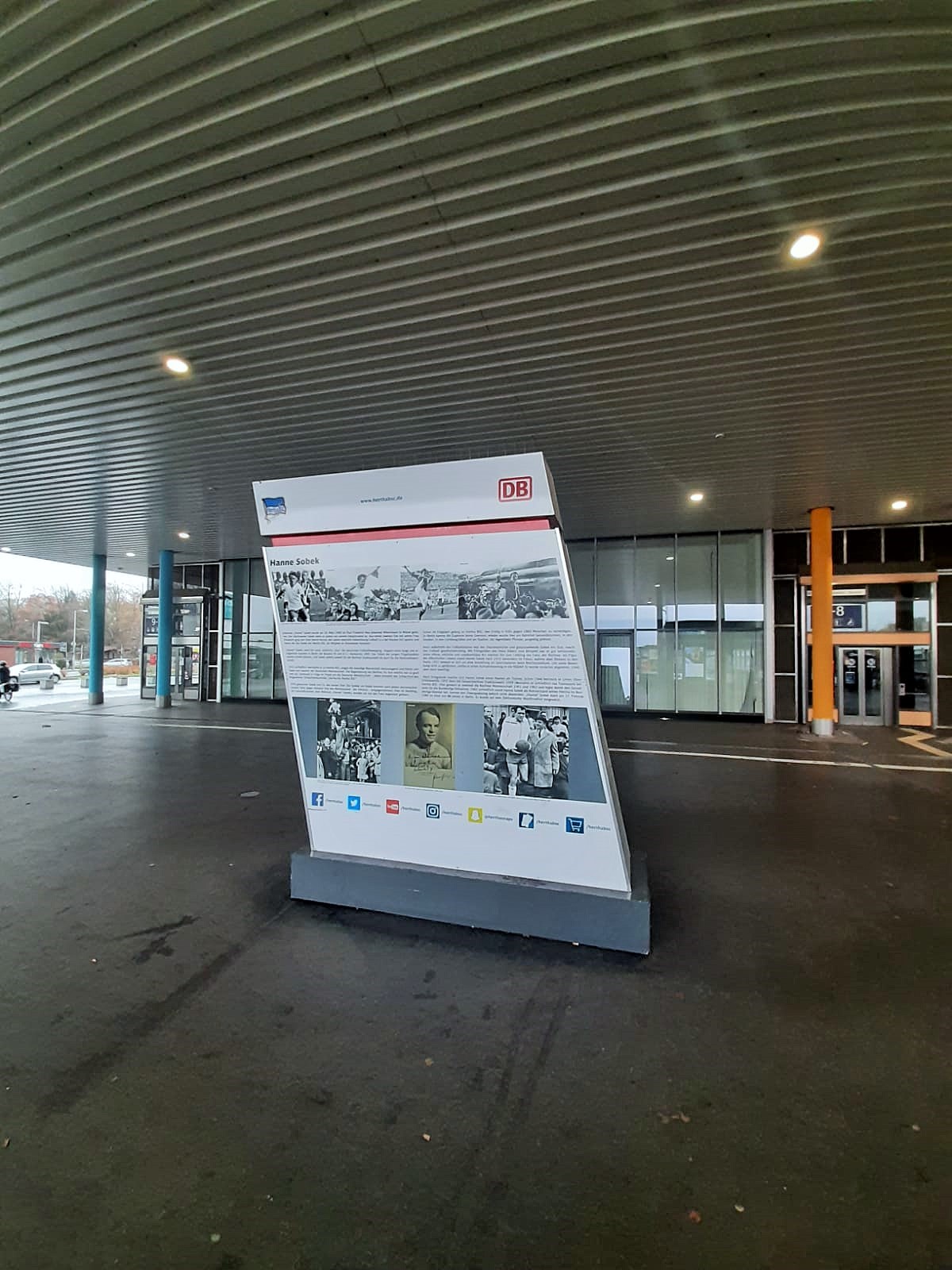 The blue and white Hertha ‘- a steamer on the Wannsee – was the inspiration behind the Verins founding on July 25th, 1892. The brothers Fritz and Max Lindner and Otto and Willi Lorenz probably had the idea for founding it on a bench on Arkonaplatz in Berlin Mitte. Since then, the association, like the city of Berlin, in which it was founded, has had an eventful history. The BFC Hertha 92 became Hertha BSC in 1923 after the merger with the financially strong Berlin sports club. As a result, the club reached the final of the German championship six times before winning the championship title twice in 1930 and 1931. 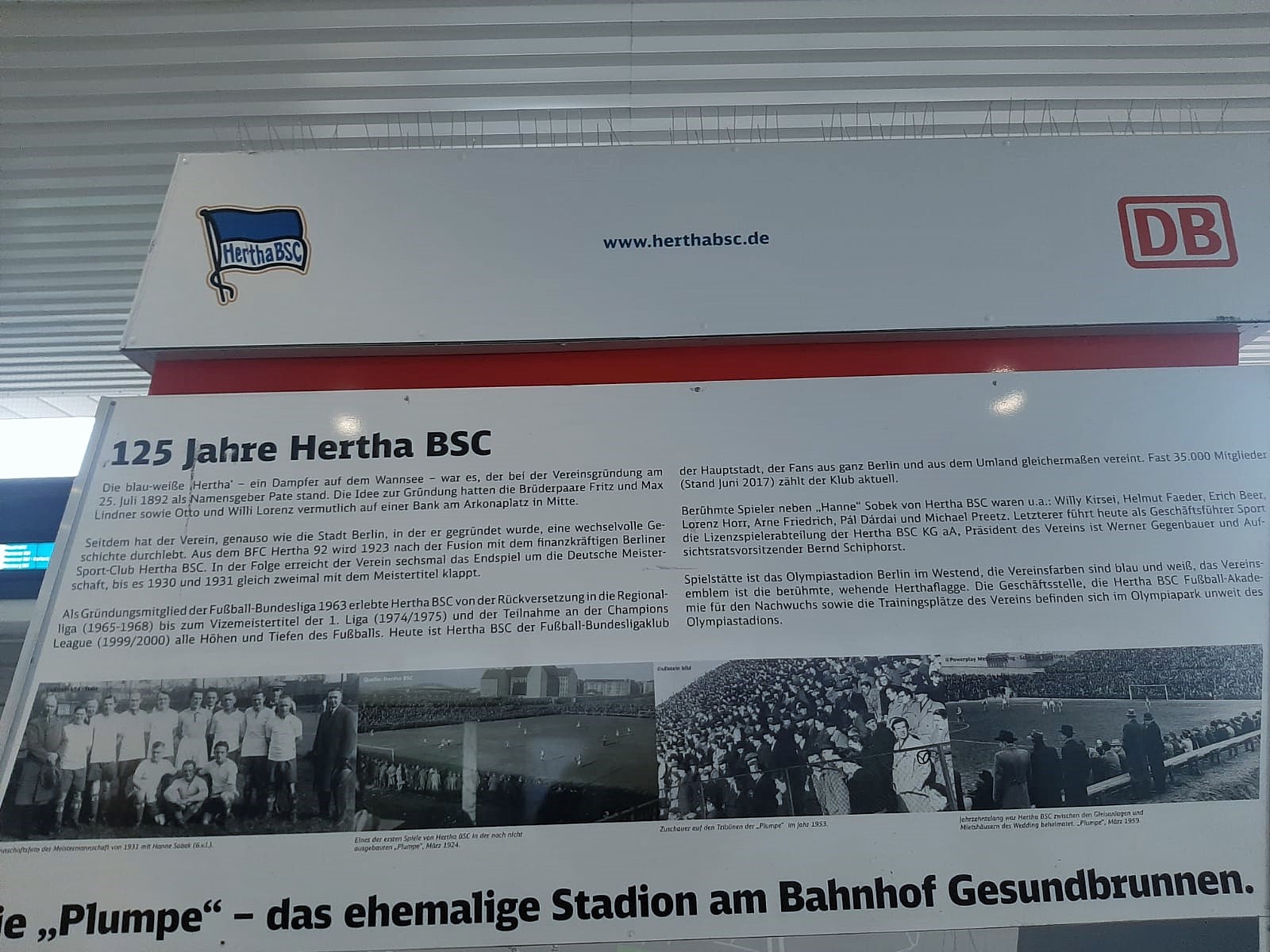 As a founding member of the Bundesliga in 1963, Hertha BSC experienced all the ups and downs of football, from being transferred back to the regional league (1965-1968) to being runner-up in the 1st division (1974/1975) and participating in the Champions League (1999/2000) . Today, Hertha BSC is the capital’s Bundesliga club, bringing together fans from all over Berlin and the surrounding area. The club currently has almost 35,000 members (as of June 2017). 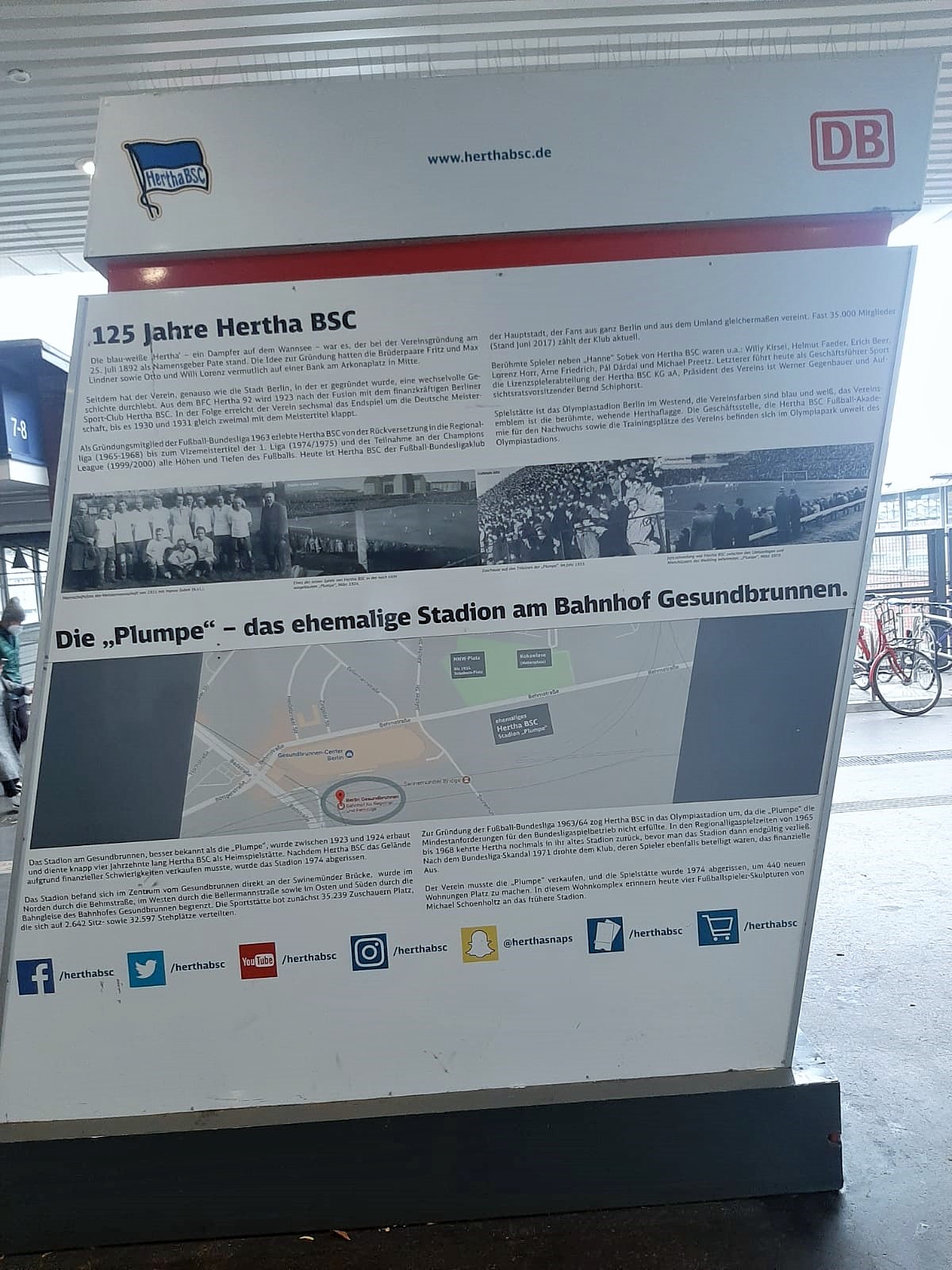 Famous players alongside Hanne Sobek from Hertha BSC included Willy Kirsel, Helmut Faeder, Erich Baer, Lorenz Horr, Arne Friedrich, Pál Dárdal and Michael Praetz. The last one mentioned is now managing director of sport in the licensed players department of Hertha BSC KGaA. The association’s president is Werner Gegenbauer and the chairman of the supervisory board is Bernd Schiphorst. The venue is the Oympiastadtion Berlin in the Westend, the club colors are blue and white, the club emblem is the famous, waving Hartha flag. The office, the Hertha BSC football academy for the youngsters, and the club’s training grounds are located in the Olympiapark not far from the Olympiastadtion.

The stadium at Gesundbrunnen, better known as the “Plumpe”, was built between 1923 and 1924 and served as Hertha BSC’s home ground for almost four decades. After Hertha BSC had to sell the site due to financial difficulties, the stadium was demolished in 1974. The stadium was located in the center of Gesundbrunnen directly at the Swinemünder Brücke, bordered in the north by Behmstrasse, in the west by Bellermannstrasse and in the east and south by the railway tracks of Gesundbrunnen station. The sports facility initially offered space for 35,239 spectators, which was divided into 2,642 seats and 32,597 standing places. 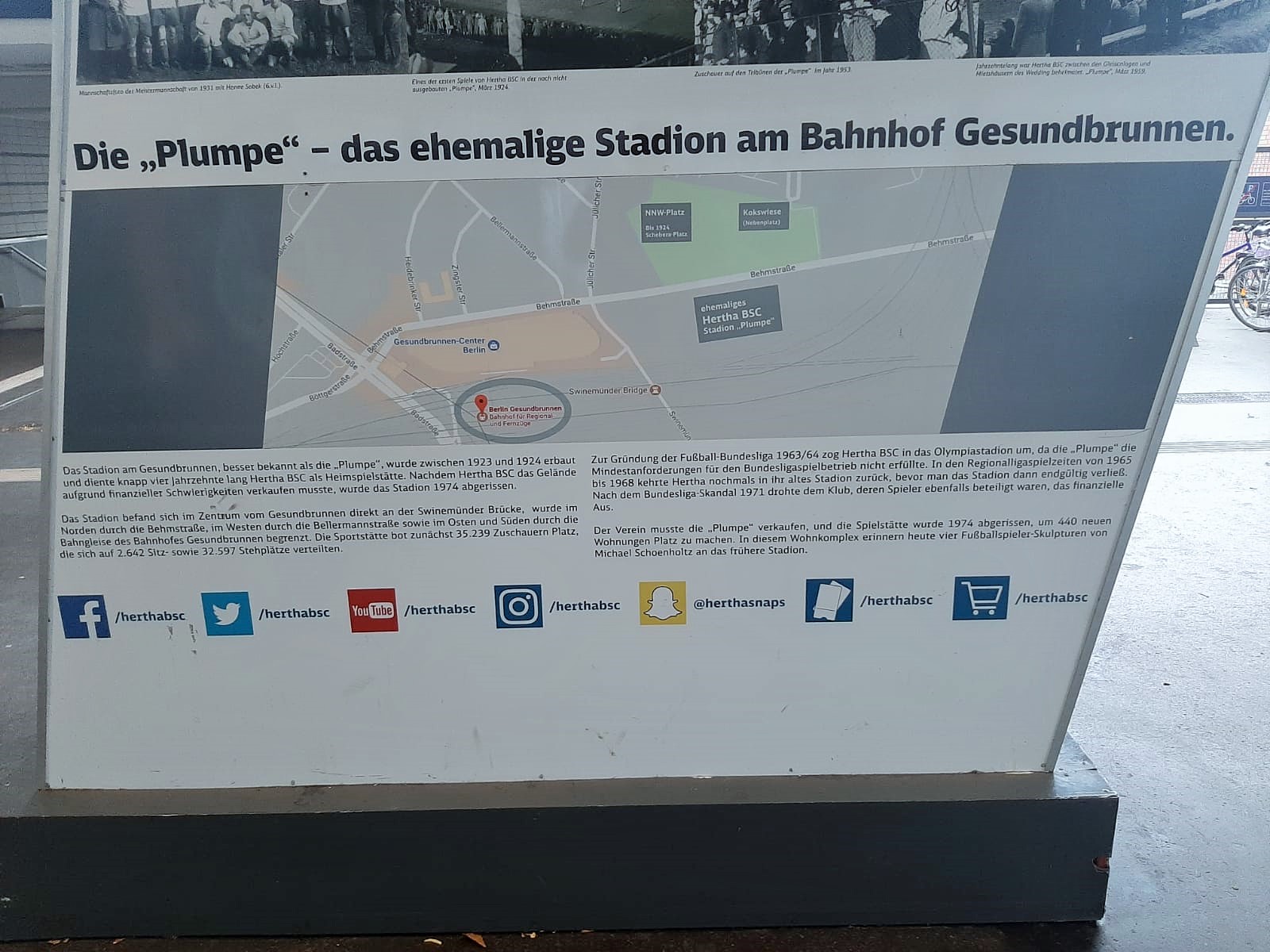 When the football league was founded in 1963/64, Hertha BSC moved to the Olympic Stadium, as the “plump” did not meet the minimum requirements for Bundesliga games. In the regional league season from 1965 to 1968, Hertha returned to their old stadium before finally leaving the stadium. After the Bundesliga scandal in 1971, the club, whose players were also involved, faced financial failure. The club had to sell the “Plumpe” and the venue was demolished in 1974 to make way for 440 new apartments. In this residential complex, four soccer player sculptures by the artist Michael Schoenholtz are reminiscent of the former stadium. 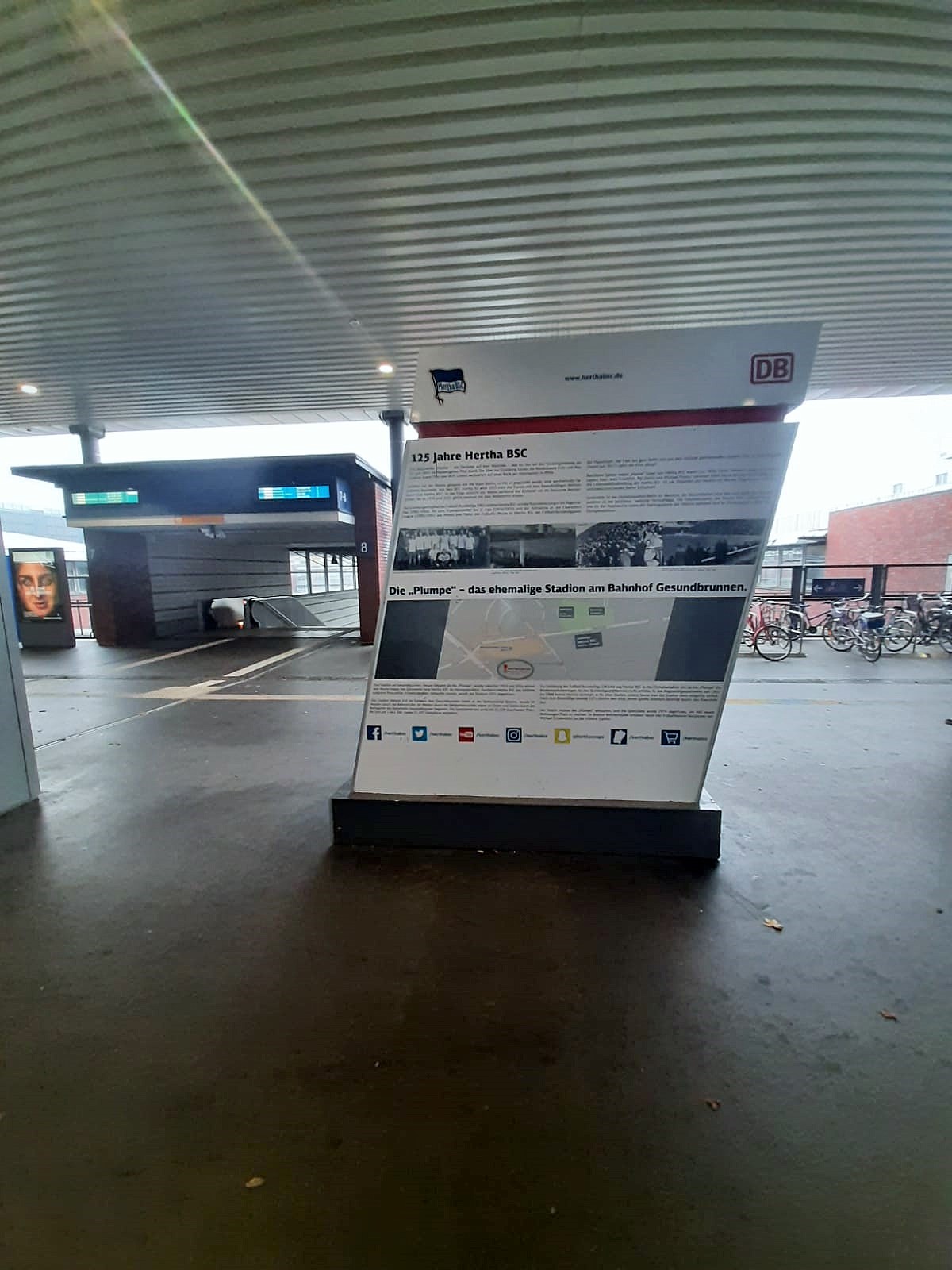