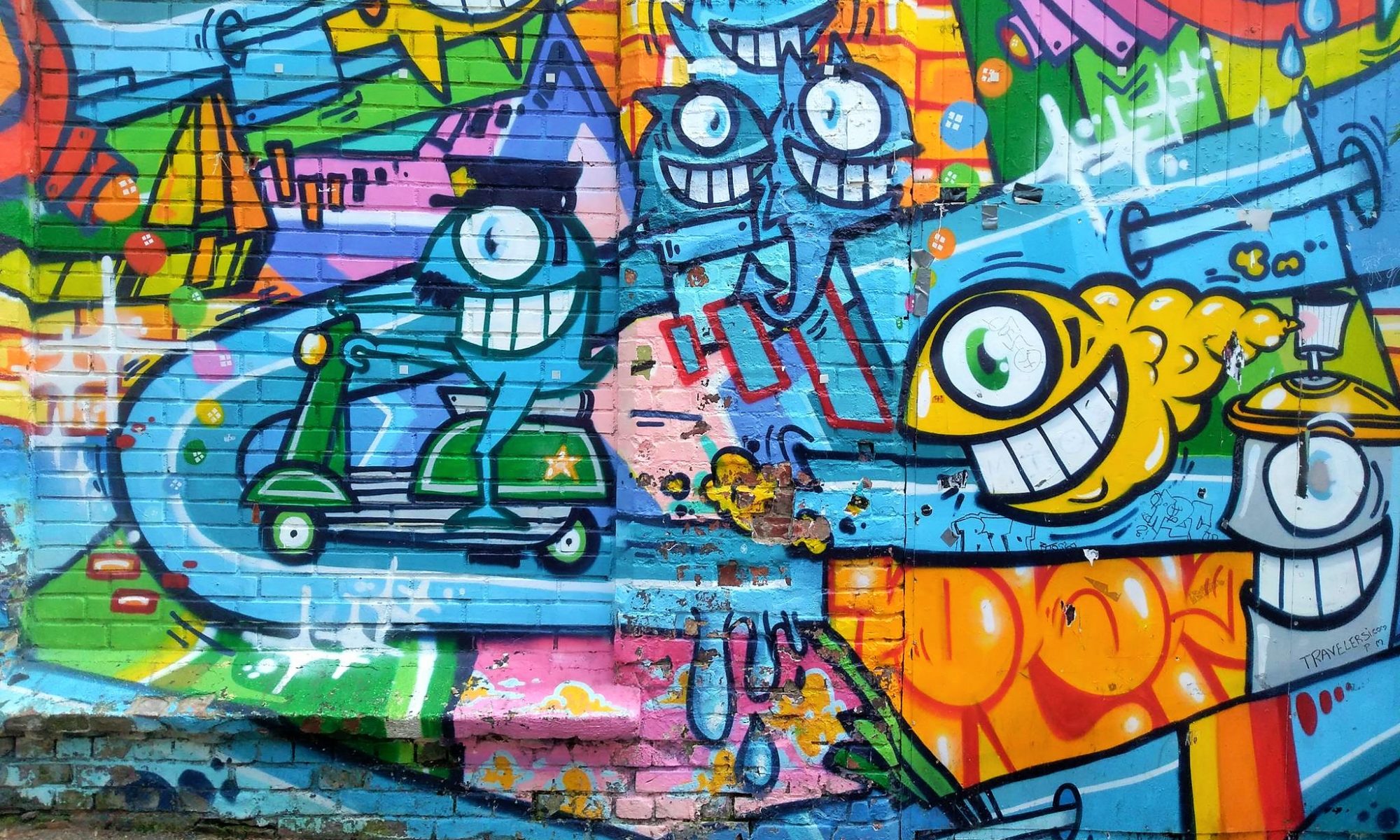 This district is also simply wonderful and offers its own great multicultural diversity! Together with the district of Tøyen, Grønland is a central area for immigrants and migrants in Oslo. The percentage of migration in Grønland is around 40%. That means there’s something going on here! Here the mixture of cultural diversity, choice and possibilities is right. Here, too, real life takes place on the street. From the main station to the north you can stroll along the river AKERSELVA. In summer, the green areas are full. Many people do sports, drink beer, chill out, picnic, barbecue, listen to music and relax around the river. Of course, some finished figures also run around, because they continuously pop it too pure. It’s noticeable. The atmosphere is still very peaceful. Within five minutes, I had four different leaders who offered their services to me. 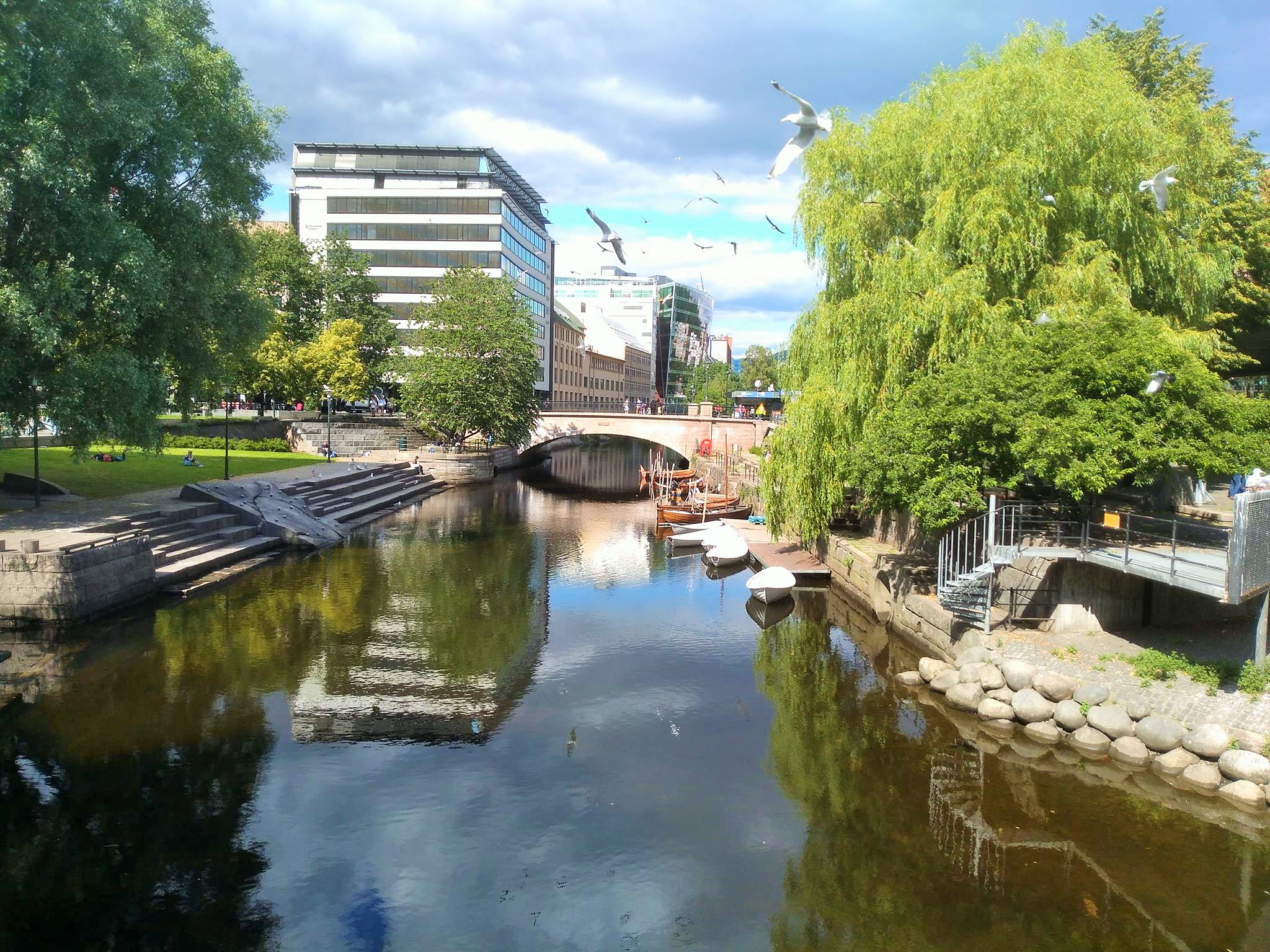 I refused, because I had a similar feeling on the tour as on a holiday in Brazil. I didn’t really trust the roast, I didn’t trust it, I didn’t trust it. The neighborhood is wu-blissful, bustling and some is in motion. That’s part of the appearance. Ultra dy-namish. Many entertaining and friendly people are also at the start. With narrow-lish or just hand and foot you get very well in the neighborhood. A smile does a lot, too. One bag of colorful freedom please! 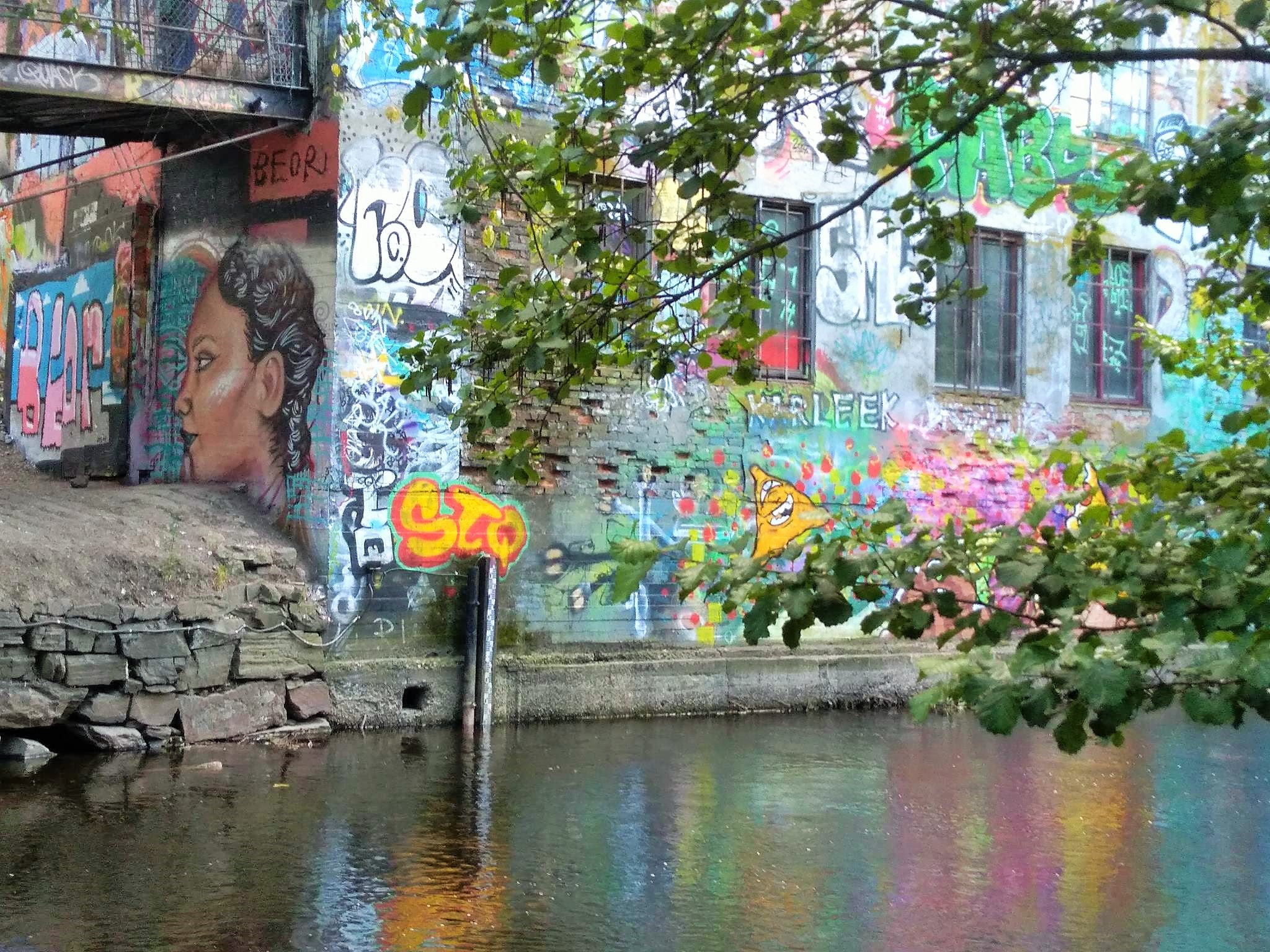 The industrial flair along the AKERSELVA definitely has charm. Old factories stand everywhere and line the promenade by the river. Many factories are intact or reconstructed, renovated or restored. High-quality street art can be found here at every corner. That’s exactly my taste. Industry, graffiti and natural elements. More on that later. In Grønland there is good food for a price. The numerous restaurants are also worth a visit. The selection is excellent. The food is from all countries of the world. Asian, African, etc. there is something for everyone and the prices are actually humane compared to other quarters in Oslo, for Norway. Preferably around the local main street. Grønland has many wonderful cafes, bars, snack places, restaurants and from time to time, of course, a hairdresser. One of my recommendations is the MEKANISKE VERKSTED. There you can have a nice flip in and what is special, it may be brought food from outside. 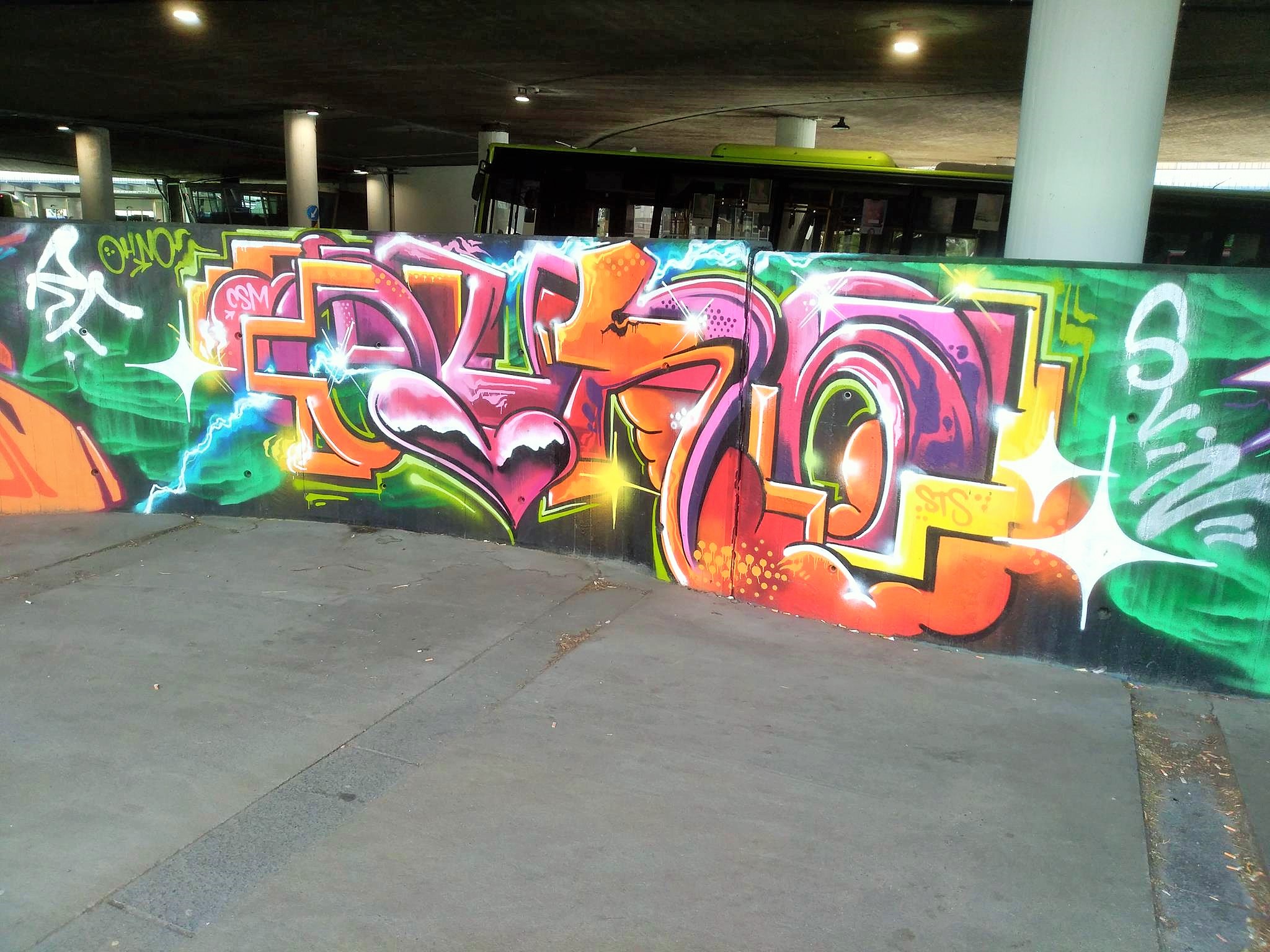 I didn´t know that before, but I think the idea is awesome, because cooperations with other partners like restaurants or pizza delivery services are possible and the bar is almost like a living room. The style is fascinating and grandiose! Set up in an old factory, the MEKANISKE VERKSTED rocks really hard! Heavy metal! For food, the PUNJAB TANDORI with its Indian cuisine is a good choice in the price-performance sector. The location is relaxed and informal. There are also various venues along the river with LIVE MUSIC and DJs. Be sure to stop by there at least once. For example, we enjoyed spending time at the Kulturfabrik at INGENSGATE BRENNERIEVEIEN. That is a culturally high-quality factory with heaps of street art, casual alternative bars, cool cafés and good music. There was definitely a lot of punk going on and also the mixture of the audience was awesome. 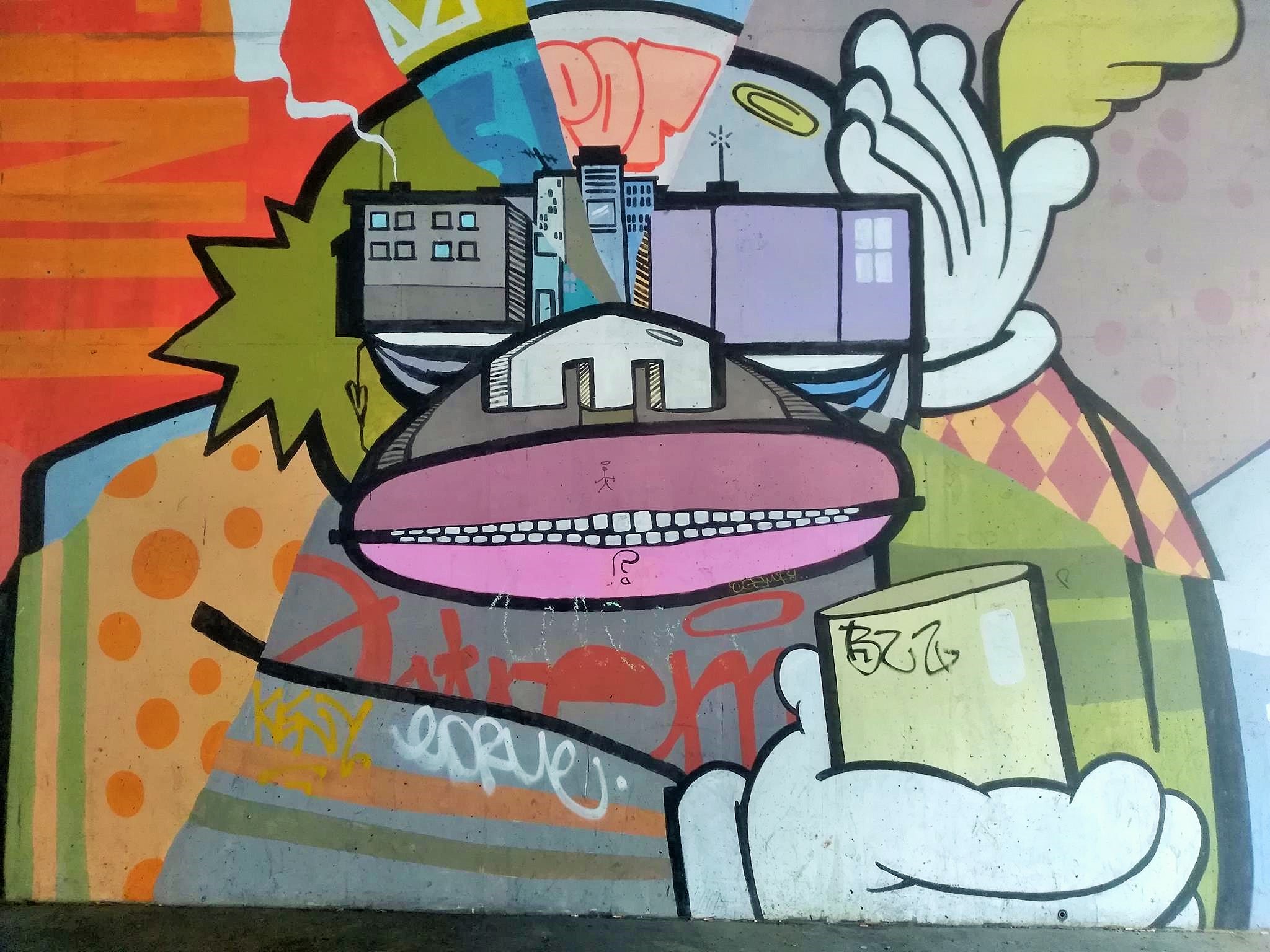 Because no matter what origin, here everyone shares the taste for art, culture, everyone enjoys good food together and you know you can let it go well. It’s the good life. Friends, Passion and Family. My absolute favourites for the spots are the BLA and the BORTENFOR. The fat locations were absolutely great and are located in a general hot spot of the city. Here’s life and there’s music. I’d really like to stay there for a while. Beer, cocktails, relaxed and good atmosphere are pre-programmed. People are cool, perfect. That’s wonderful. That’s the way it has to be! In the WAY DOWN SOUTH there were delicious dishes from the grill. Then you burst out of the seams. Really good food! Unfortunately, we could not remember all the names of the restaurants. But that’s actually normal, the restaurants change and if you are there, you will surely find one of them. Names are like sound and smoke, as long as it tastes good! 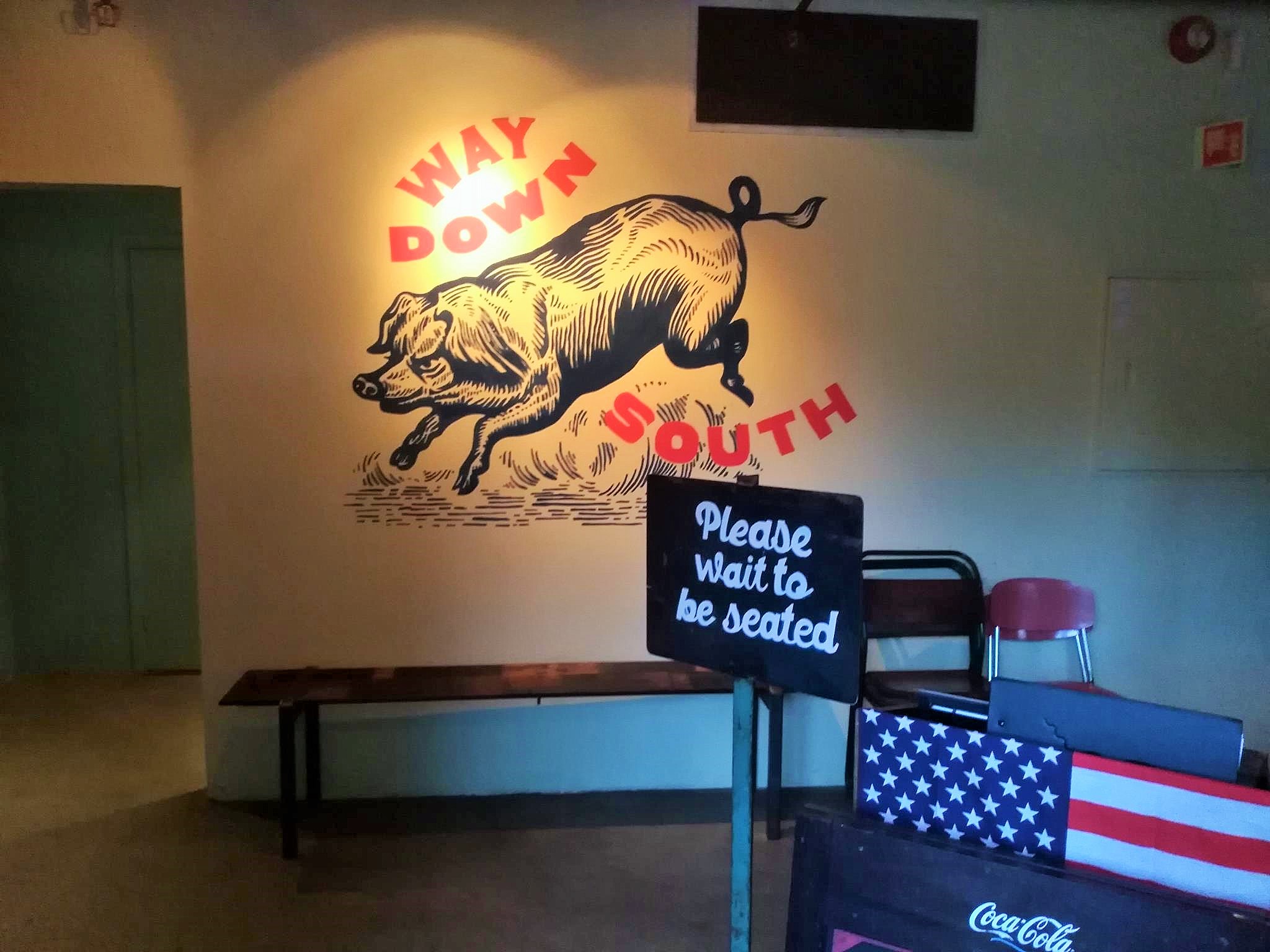 Trendy restaurants, cafés and bars in various establishments invite you to spend a lot of time in Grønland. Like in Tøyen, there’s something really going on here! Sometimes away from decadent, expensive and magnificent, towards colourful, mixed, not wealthy and yet rich in culture, art and life. The bars have an eerie flair and are also often colorful. 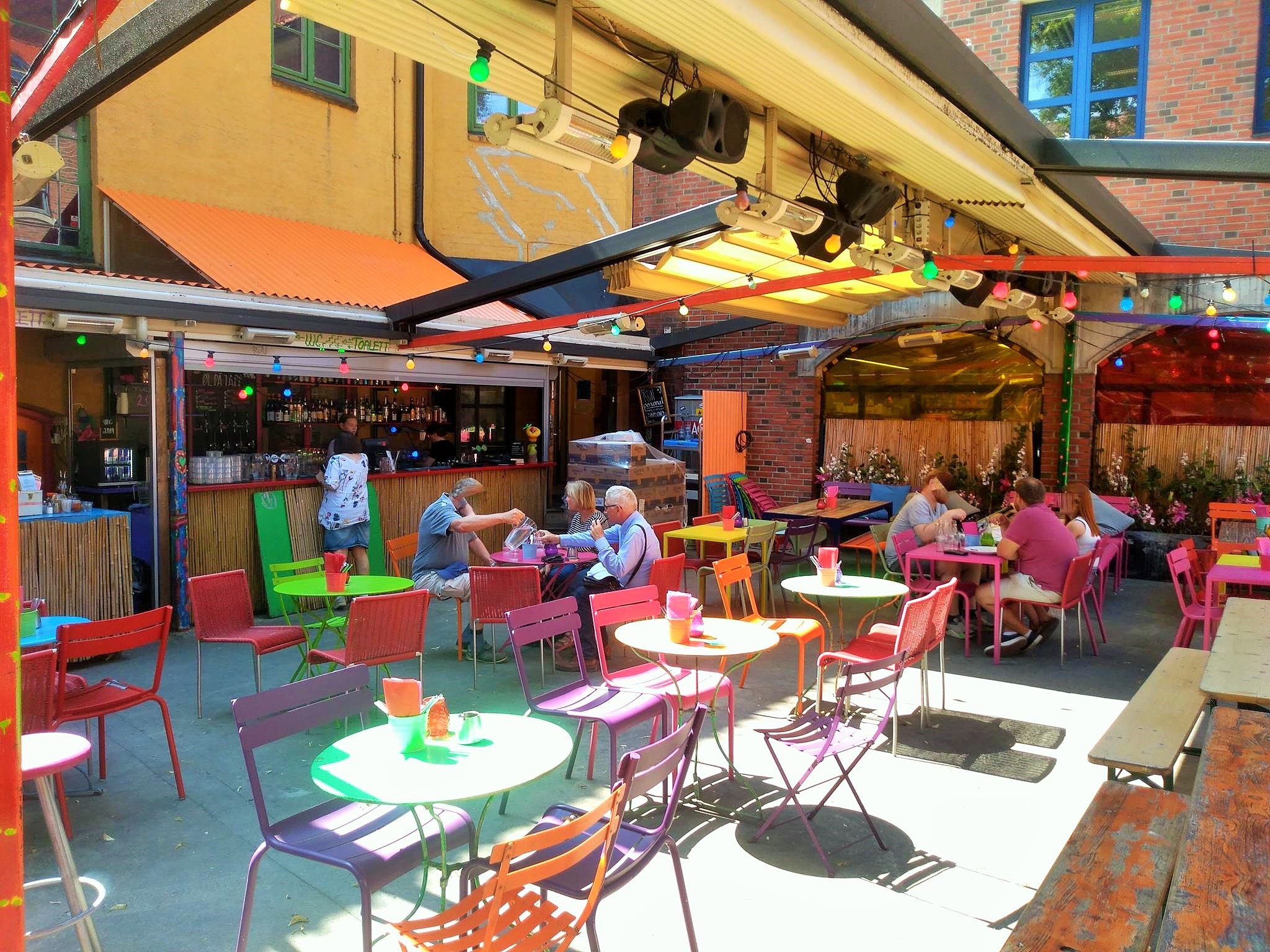 There are many stylish shops, good food and a lot to drink. This is definitely worth mentioning here. Anyone who buys beer in the supermarket should have done so by 8:00 p. m. Just on the fringes. Otherwise, the fifties for four beers is quickly gone and even in the wrong shops! Puff. . . lost! And the money’s gone. Or take enough money with you. That’s what it’s for, after all, a vacation. The supermarkets are open for a long time, the beer sales unfortunately not. It’s not negotiable either. No matter what language. It’s just not negotiable. Quasi a catastrophe, but that too can be managed. 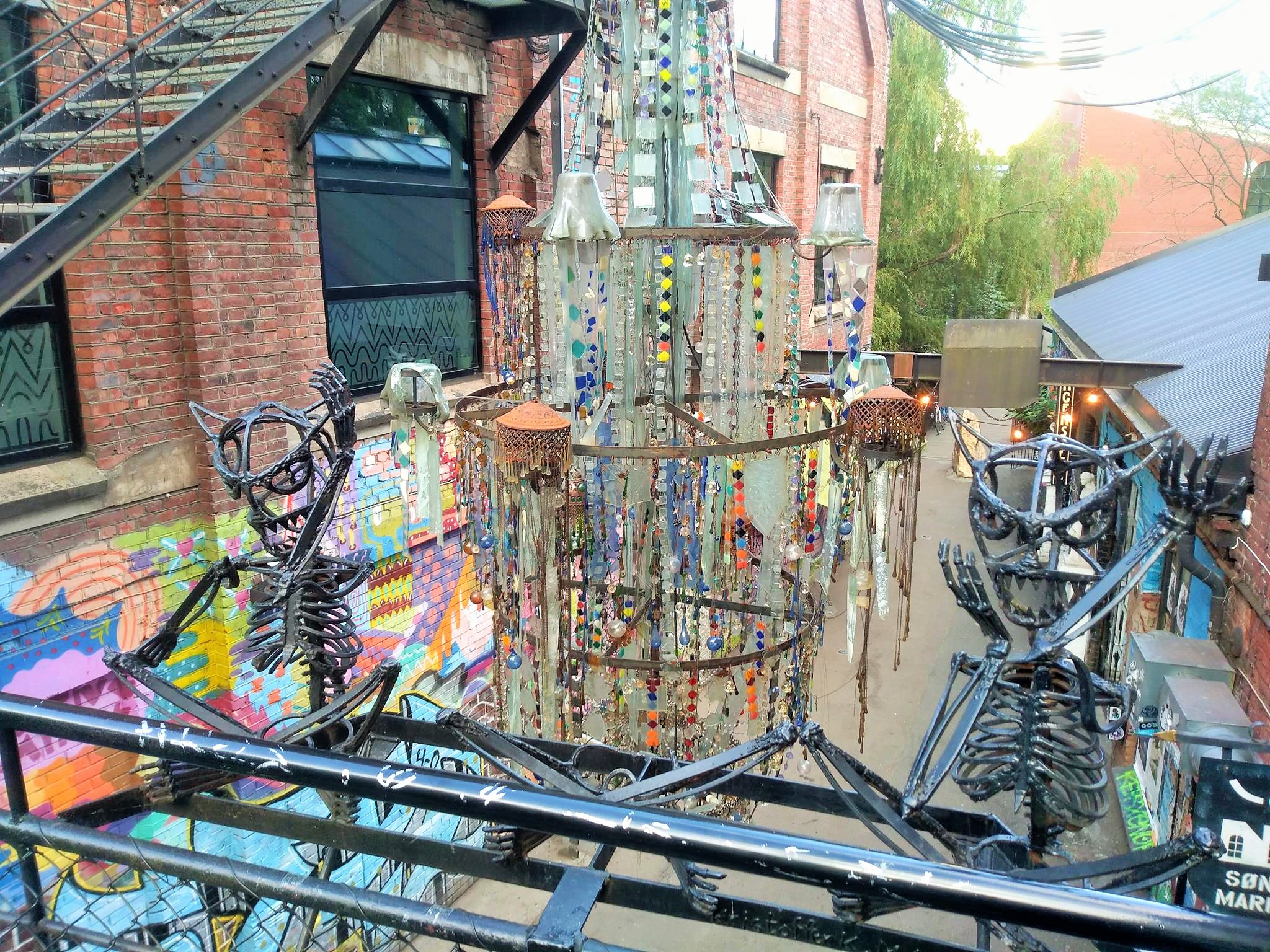 Grønland is really big in street art. But it’s really thick, that’s easy to tell. There are not quite as many MURALS to be seen here as in the other districts, but the neighbourhood still attracts visitors with its outstanding art. Here, the factory buildings are partially bombed from roof to basement. At its finest. First cream. Different styles in all shapes, colours and variants. A single cultural pleasure. 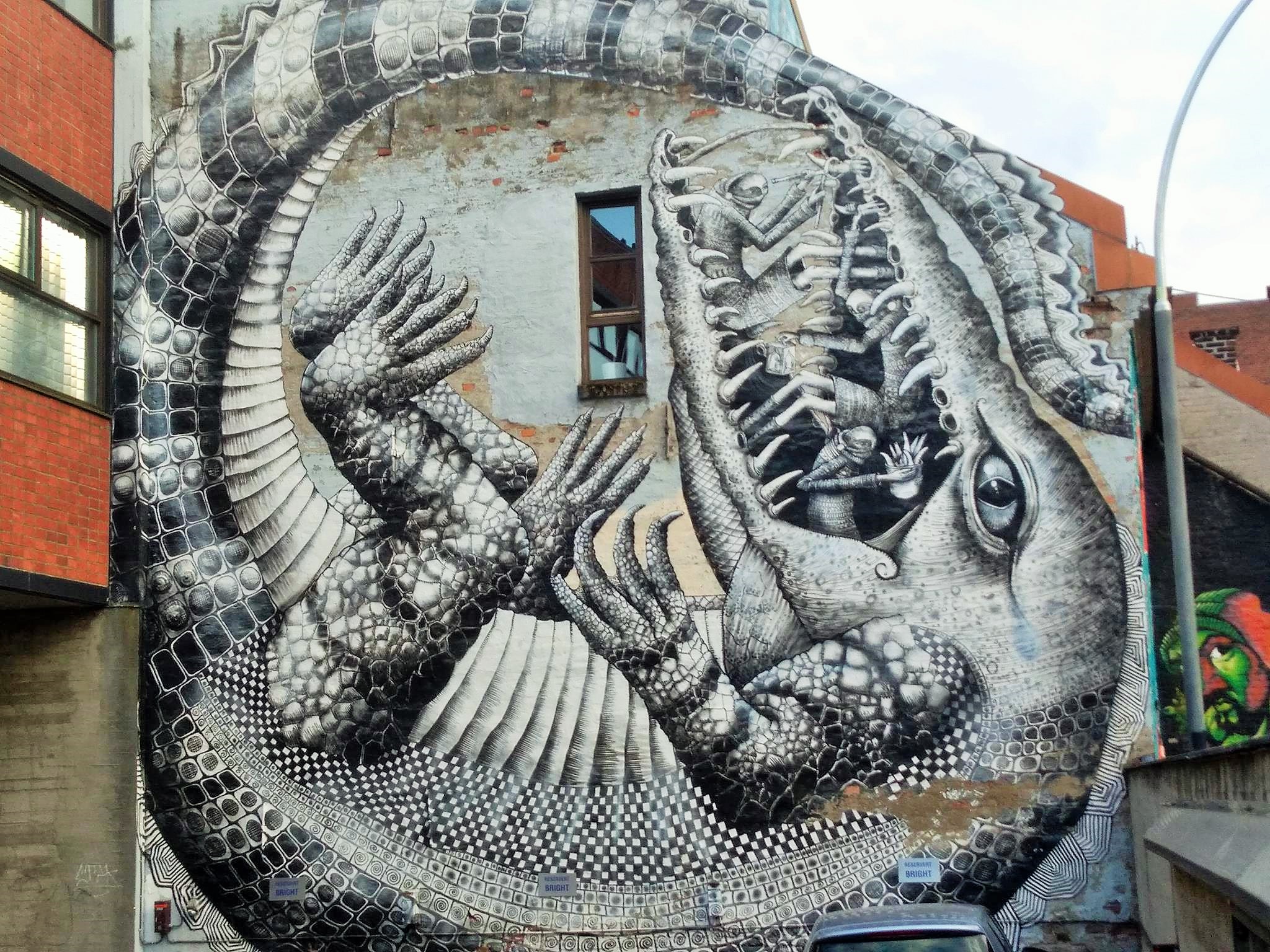 But a few more art tips for you. The BRENNERIEVEIEN, also called INGENSGATE, offers not only graffiti and MURALS, but also many installations made of a wide variety of materials. A lot comes together and is discreetly expressed: Really worthwhile! Another spotlight is given to Alberto Vejarano aka &quot;CHANOIR”; (Paris, FRA). The Colombian-born artist captivates with colorful comic fabulous animals that always appear collectively. The figures have all kinds of emotions in their luggage and come across the many colors very impressively. From friendly, over sad, angry and loving. It’s all there. The figures are usually crowded in the collective and there is little space, a lot to discover. 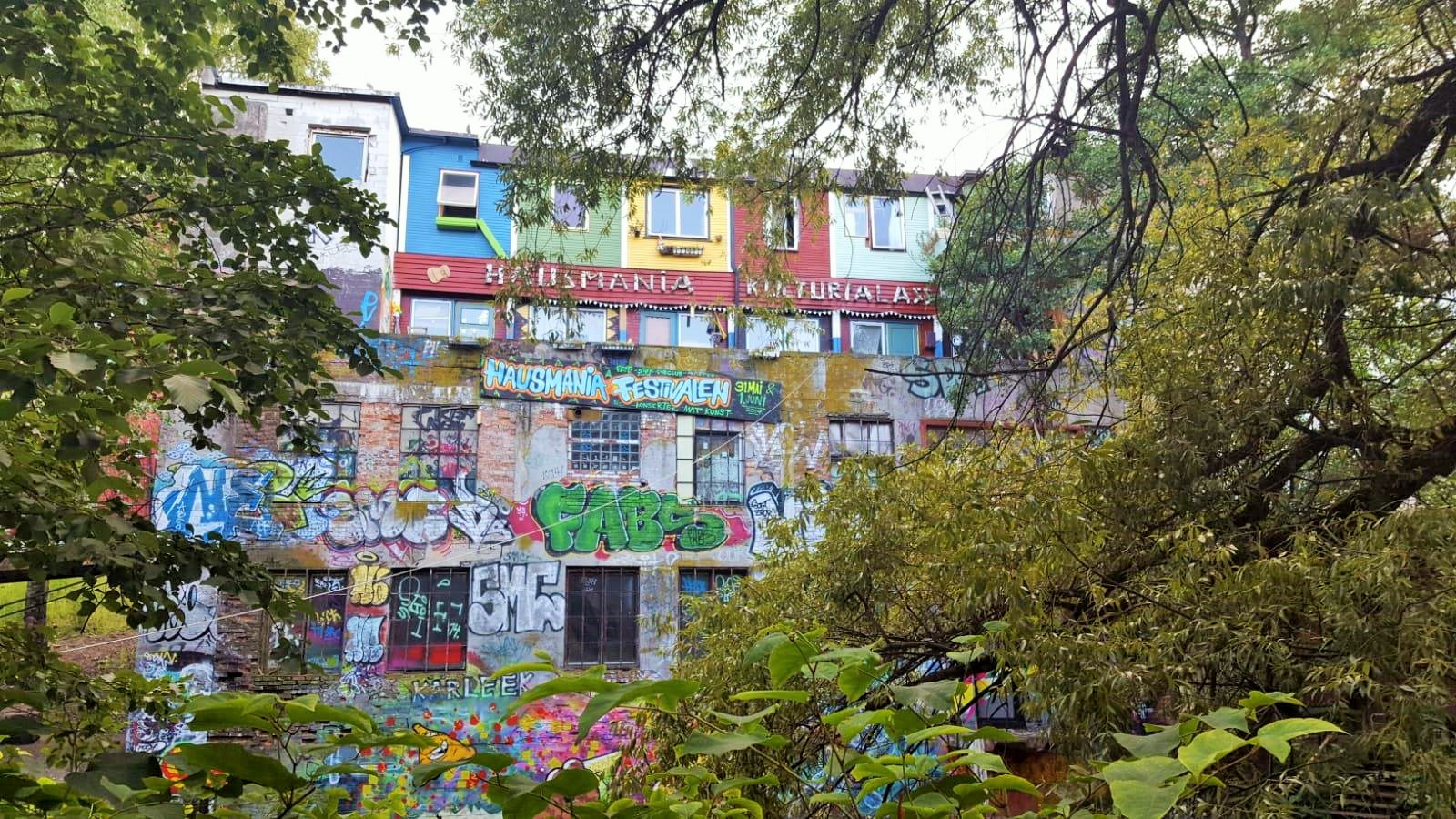 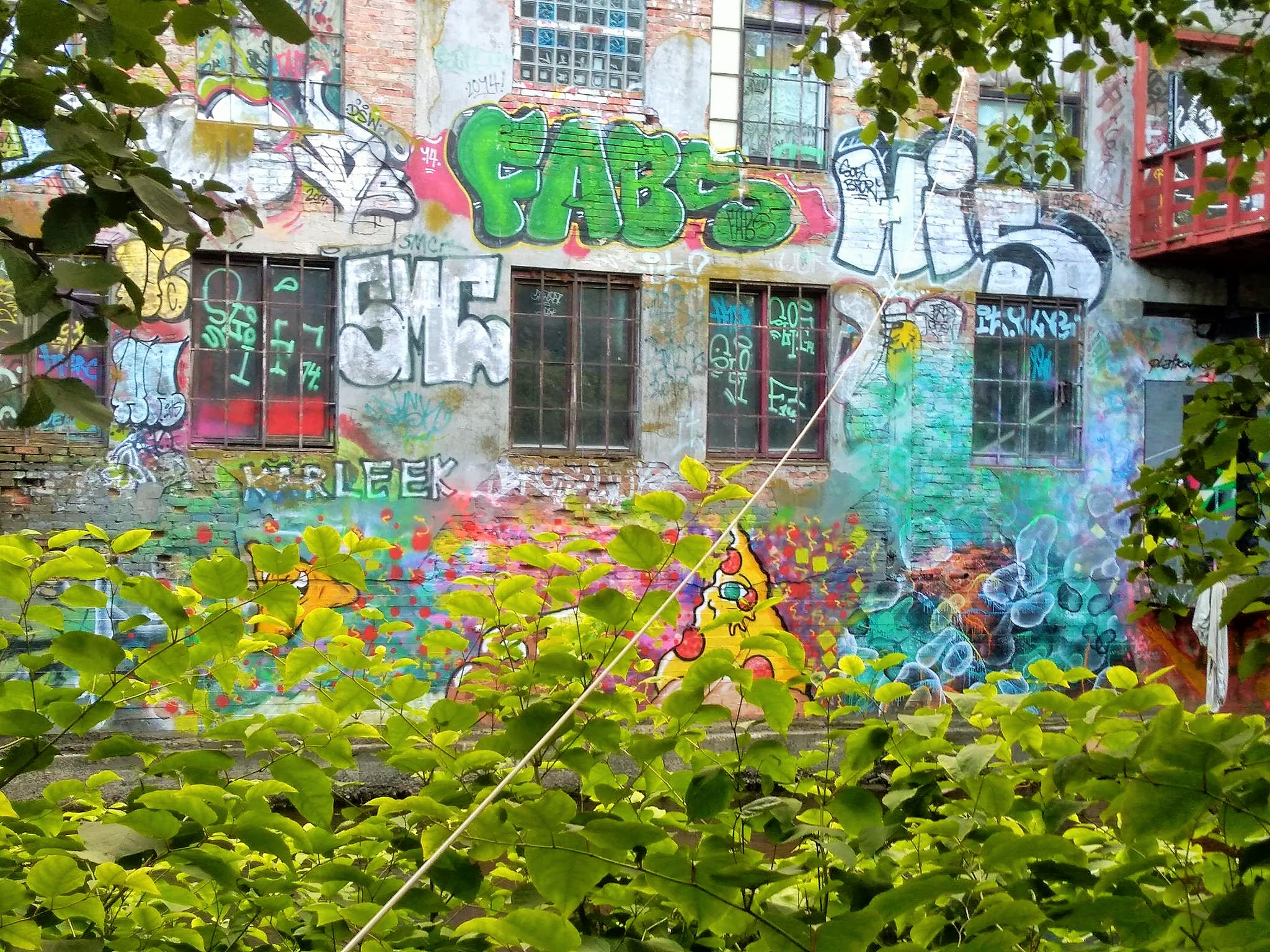 The NEDRE GATE 1 is also a pretty hot spot on the AKERSELVA. Among other things, the Italian artist ALICE PASQUINI (Rome, ITA) had a good time here. The artist, draughtswoman and illustrator is variable and diverse and not only represented on walls, but also regularly exhibits works in galleries. In about 100 cities around the world. That’s respectable and quite respectable. A real Allroun-derin. It makes many collaborations with the big companies of the world. These include, for example, Nike and Canon. In Oslo, she took out several things. The Asian sibling couple e. g.for example, which is a MURAL in blue and green tones. 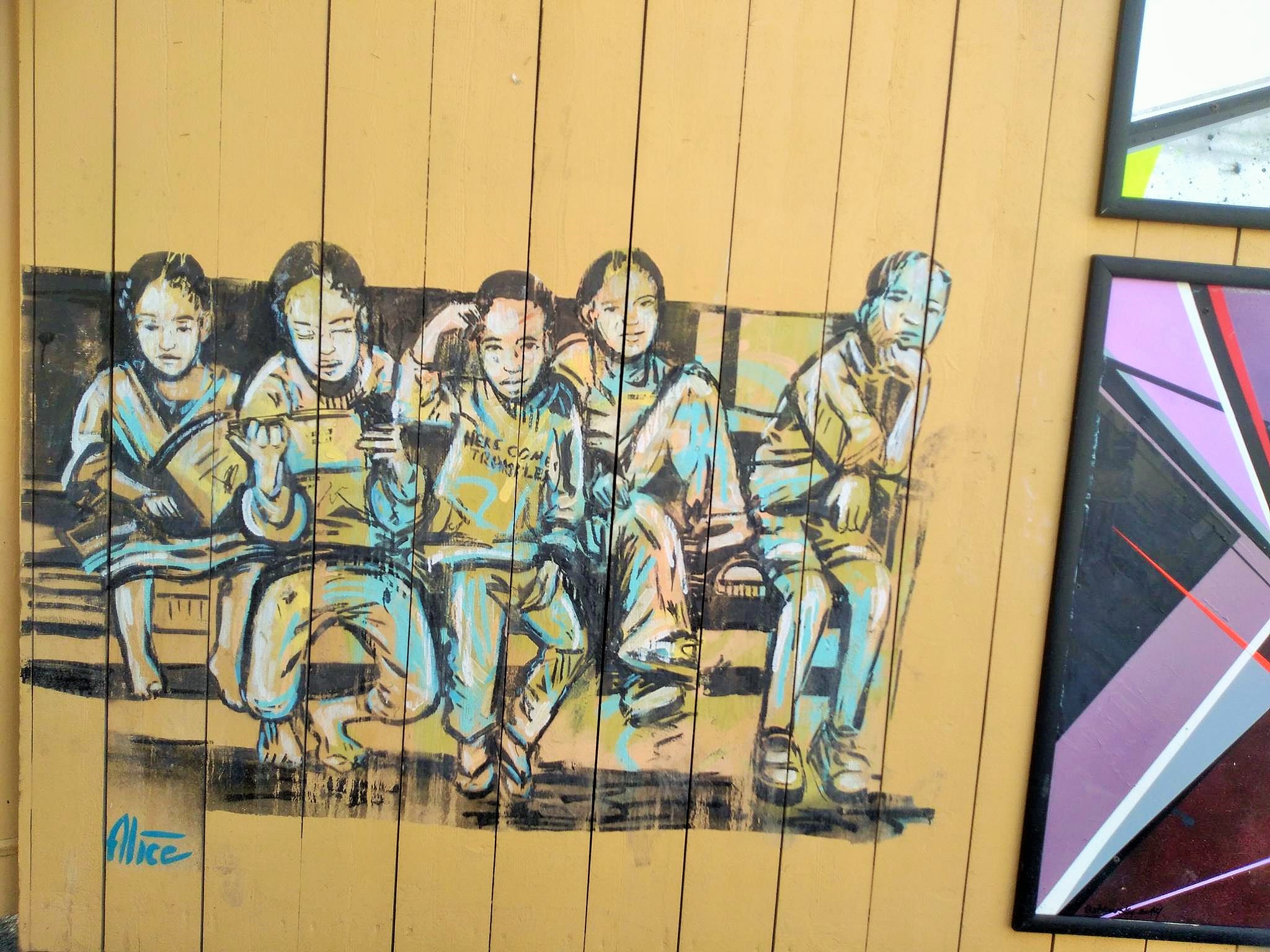 Very nice picture, good portrait style! Even the schoolchildren sitting on the bench are really well drawn. Top quality! The aggro fish of YOUR MAMAS FAVOURITE (Oslo, NOR) from 2011 is also quite casual and adorn a complete house wall in the NEDRE GATE. I really like that one too! As I said, some of the factories at AKERSELVA are just art objects of their own. A lot of graffiti, bombings, stickers and tagging can also be found here of course. Writings along the river and at the bus station accompanying you while waking, that makes the quarter just urban, lively and real. That´s it, just simple. People want to feel life. And the visitor also discreetly realizes that there is always something going on here. It´s vibrant. For me super definitely an absolute must vistit spot when staying in Oslo. 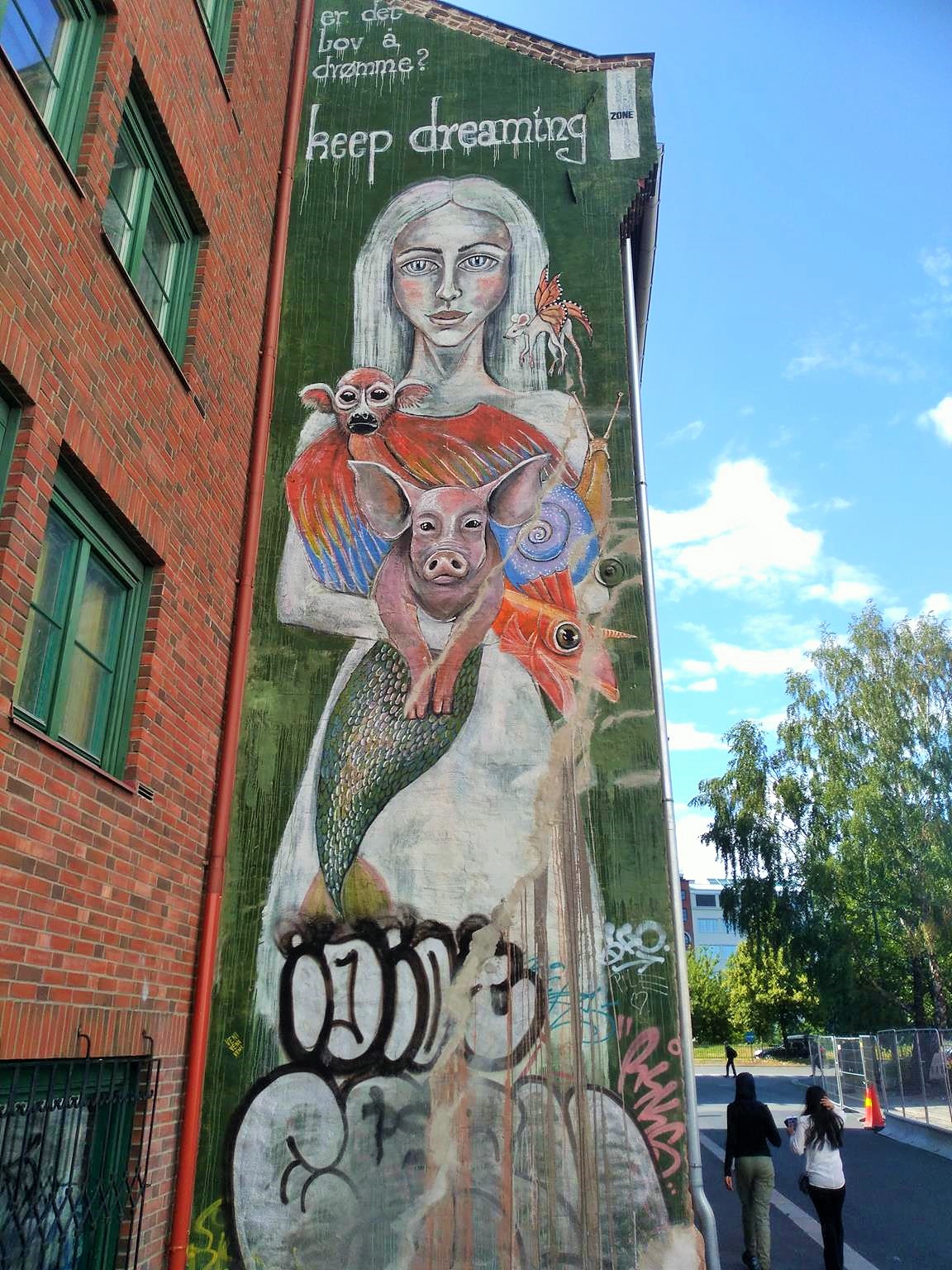 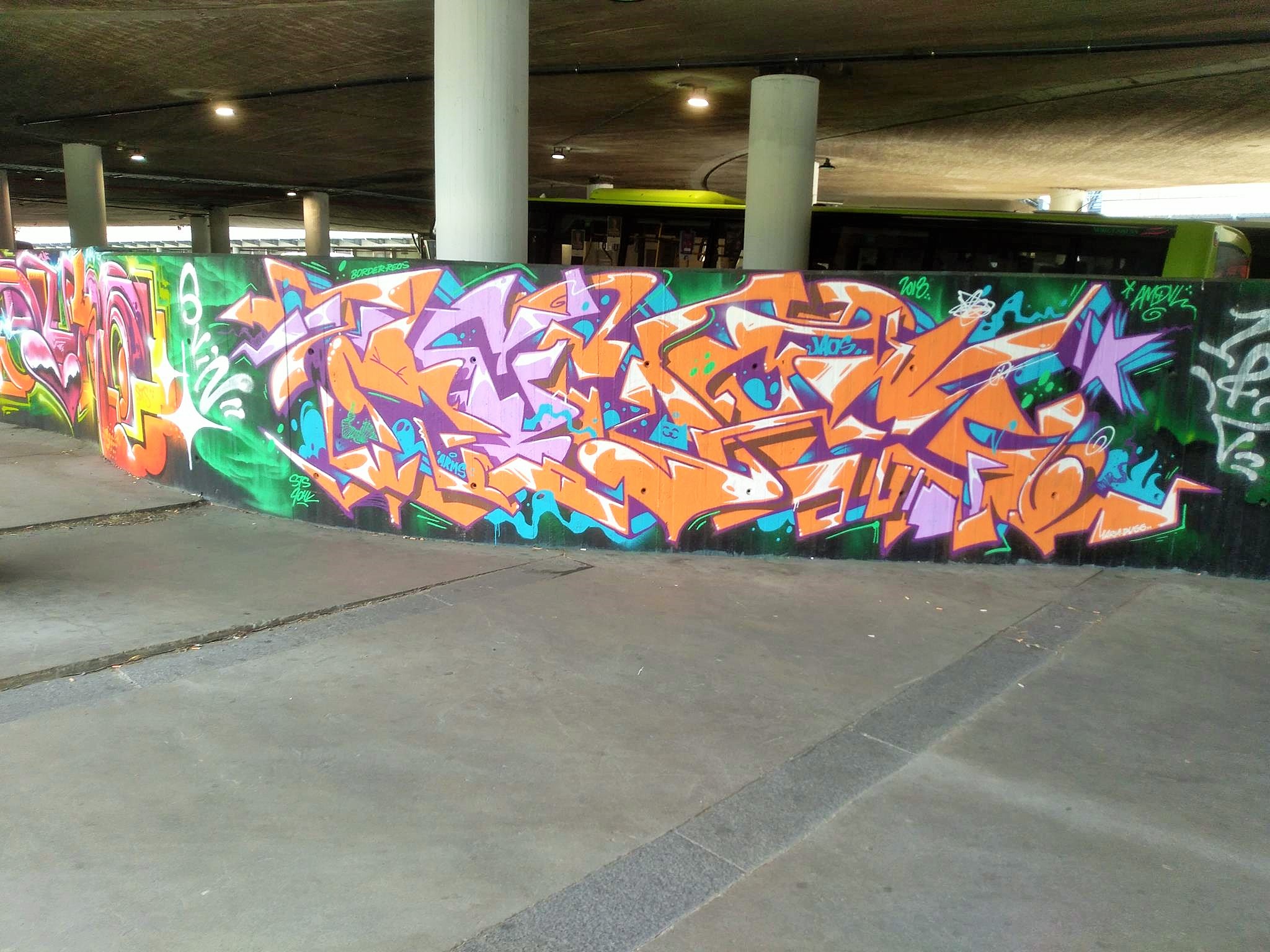 On the border with Tøyen, the transition of street art flows into Grønland. Somehow I found the image of ZOFIA JAKUBIEC from Oslo very suitable exactly there, when I think of the individual districts. The grandiose works KEEP DREAMING or ER DET LOV Å DRØMMe from 2014 at NORBYGATA show the state I had in the neighborhood. It’s so hot in here, can someone pinch me? This can only be a dream! The two quarters are very close to my heart. Due to the diversity, art and culture, you quickly notice that you are in the capital of Norway. In addition to colossal natural spectacles, the city does not have to hide at all. On the contrary! Oslo has what it takes to show off and has a safe place among the most exclusive cities in the world. And that in every way! That is already clear! 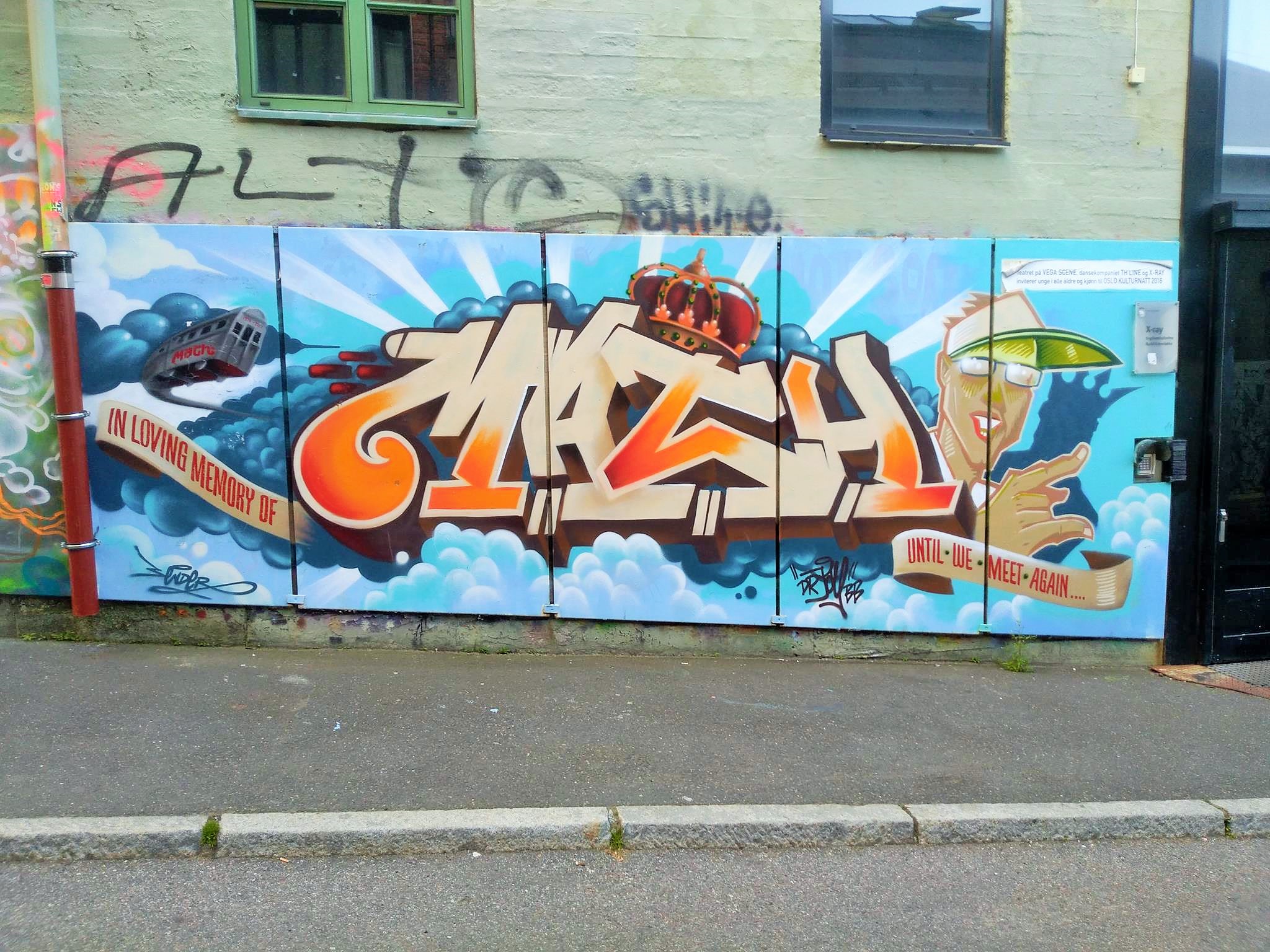 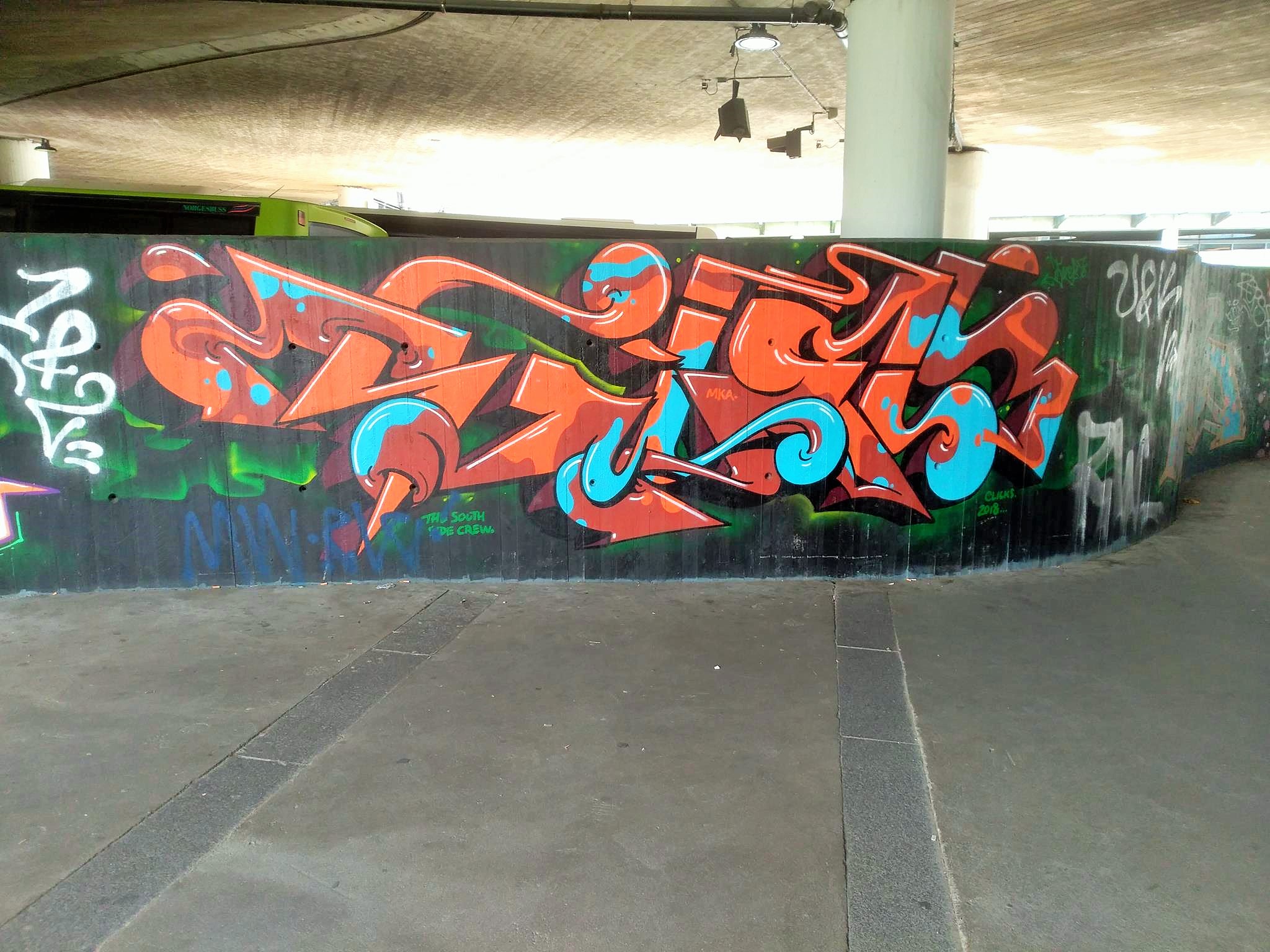 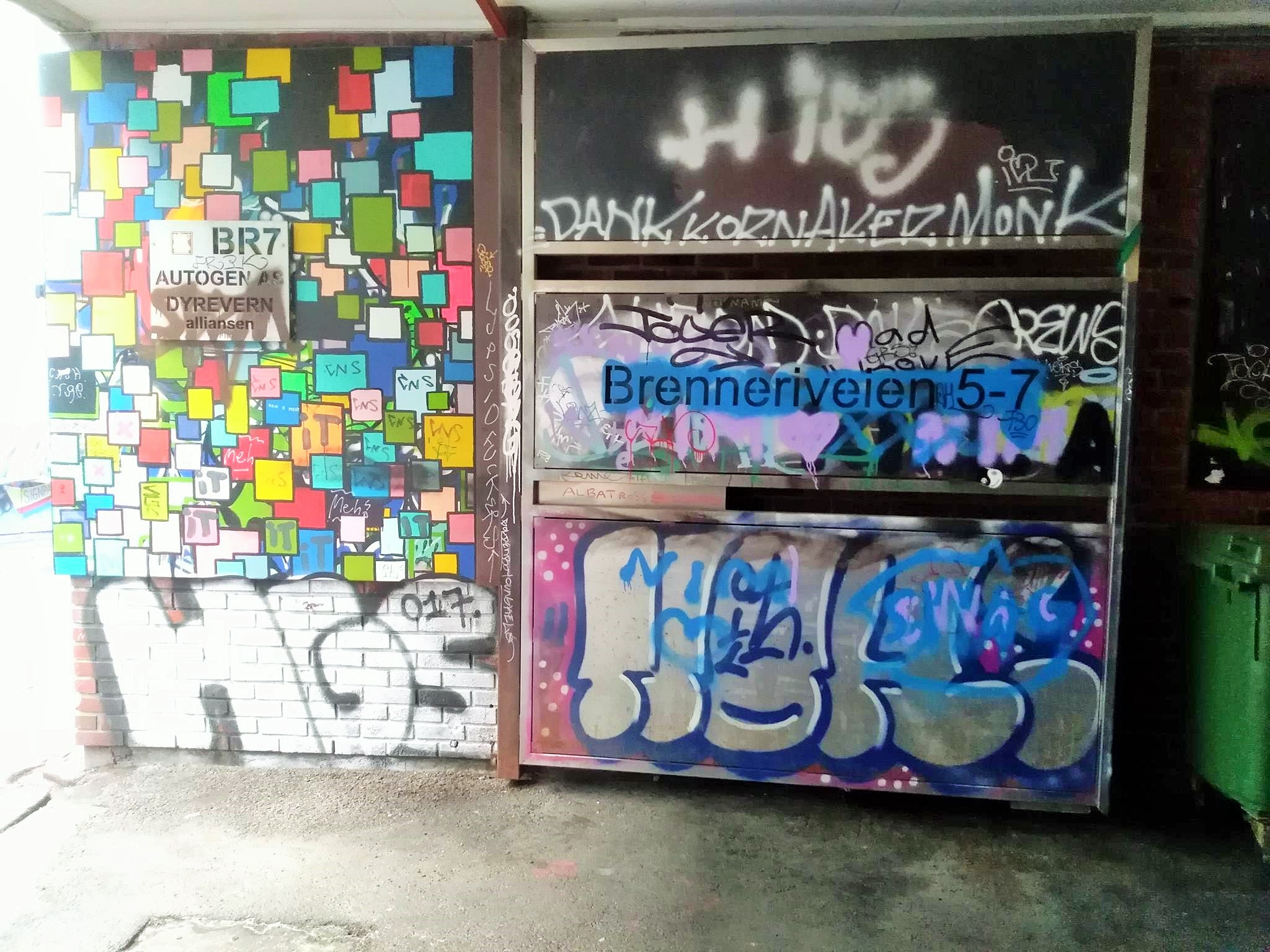 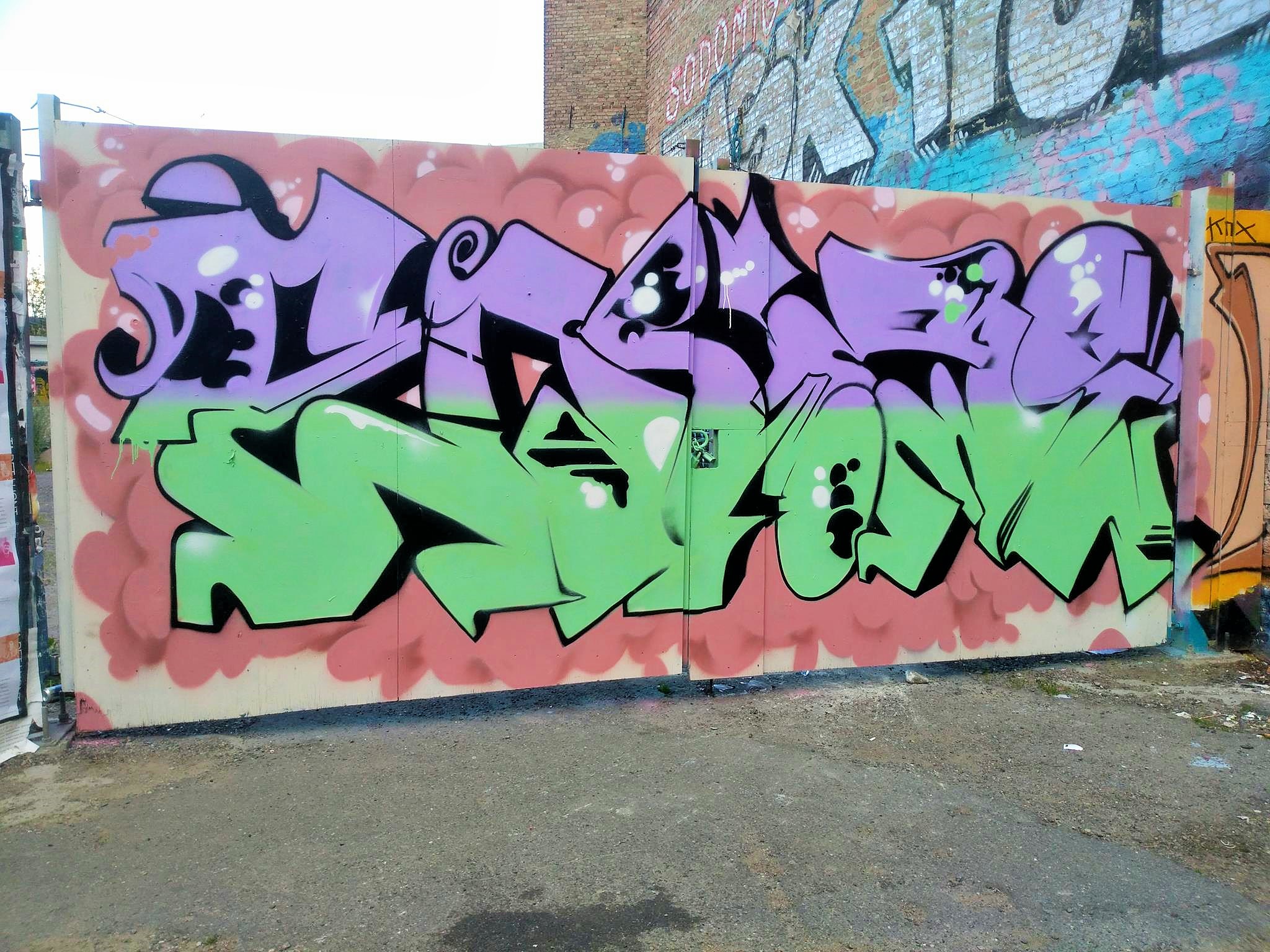 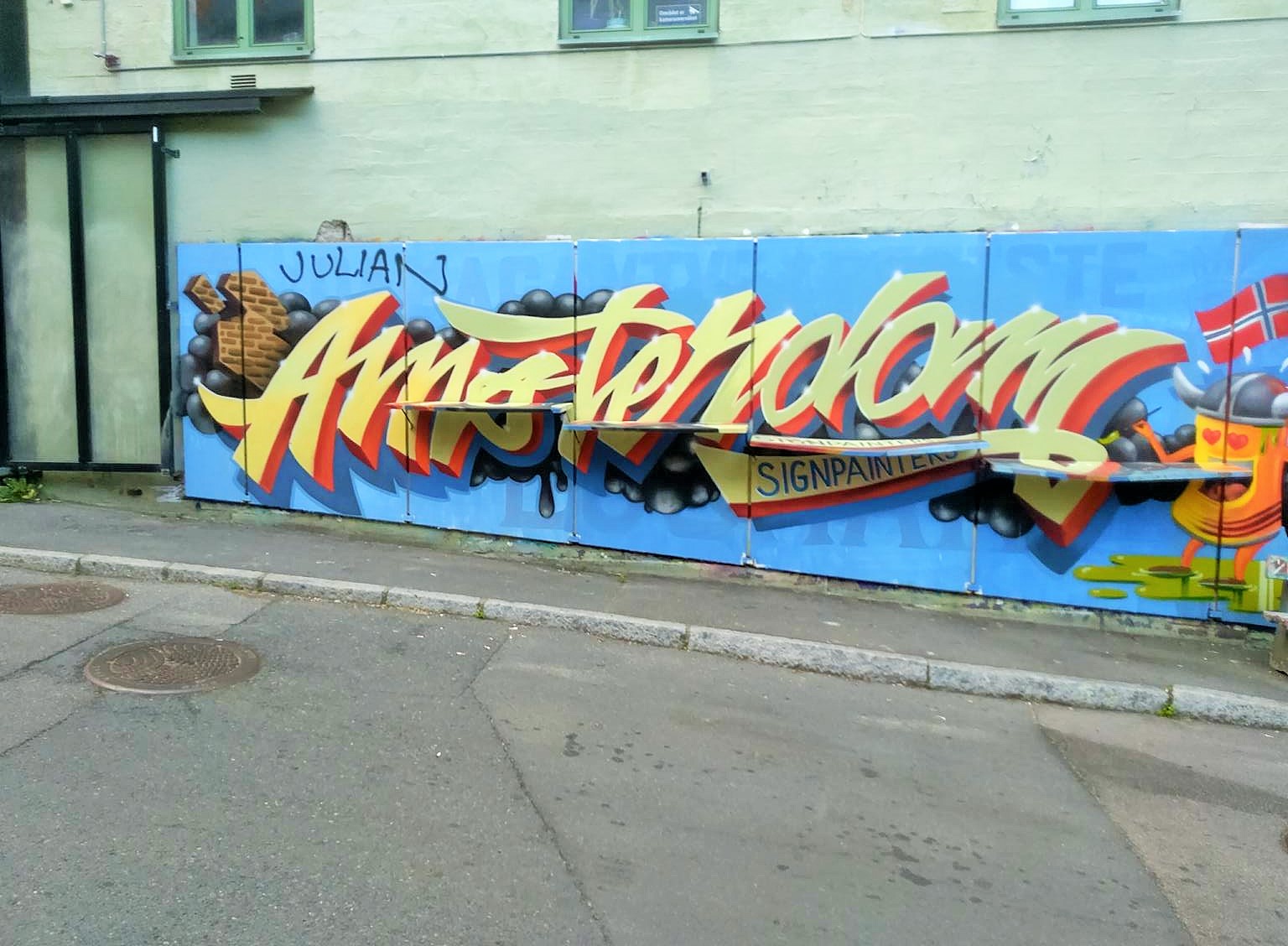 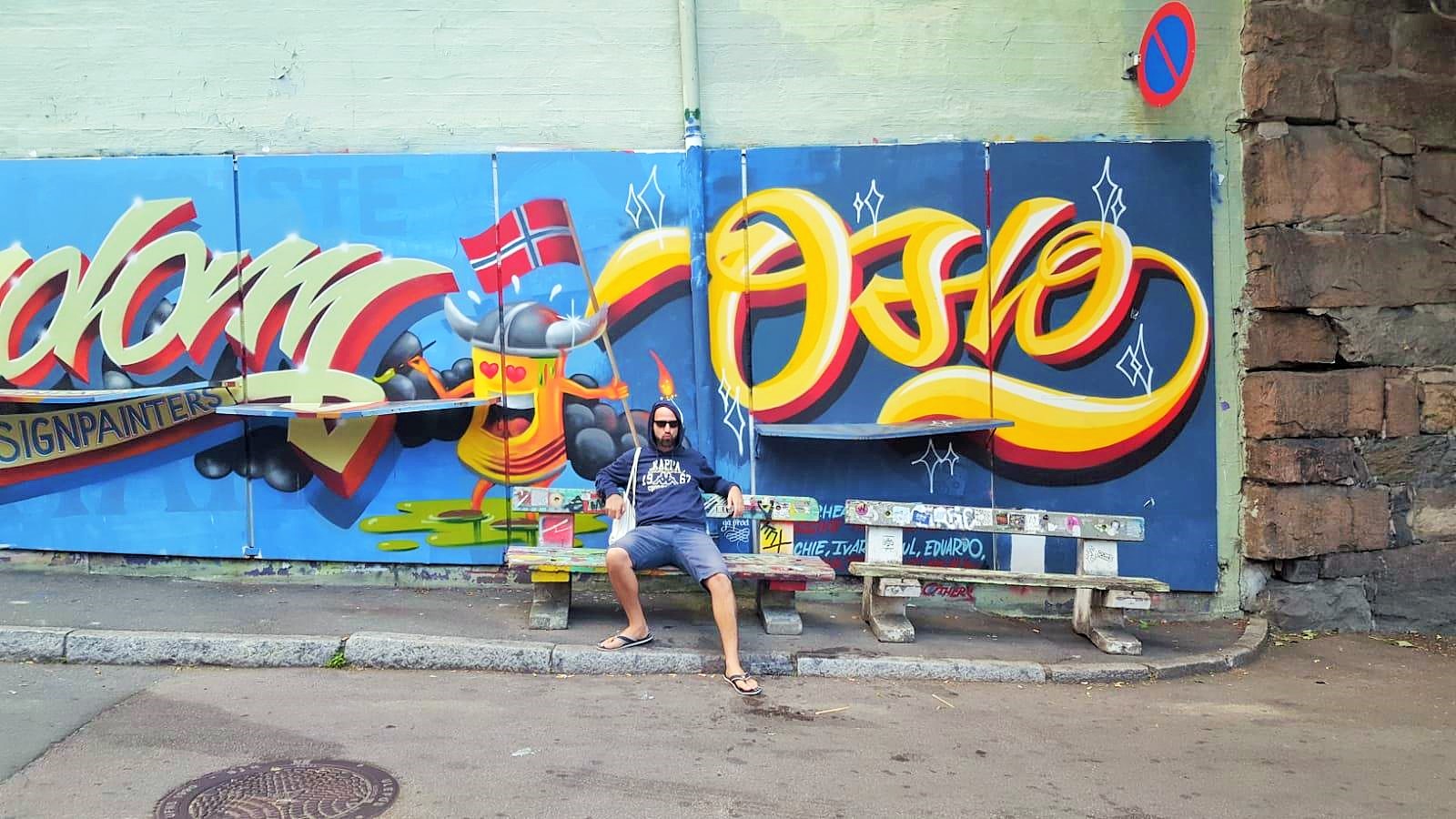