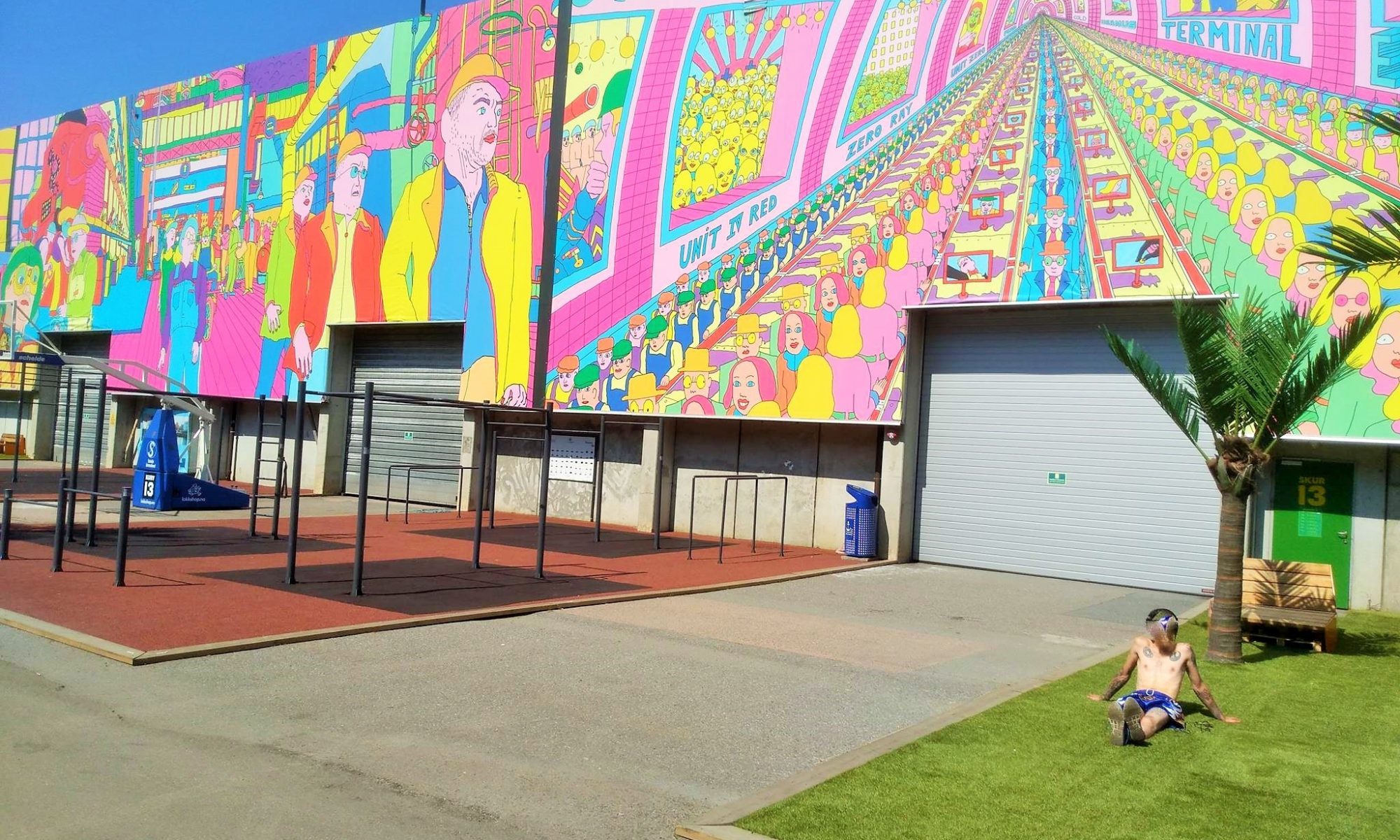 The centre of Oslo and its new distric Bjørvika is very impressive and a place you shoud definitely visit. Not only villas dominate here, although they appear everywhere in the cityscape, but extremely imposing and futuristic buildings. Impressive buildings of all epochs have gathered and give the cityscape a formative appearance. A mixture of fictional modernity and villas as well as buildings of long past years. Definitely worth seeing and highly interesting! The appearance also shows the immense liveliness and creativity of the city. Here, something is always planned, implemented and presented. Great architecture, art and culture. World class! 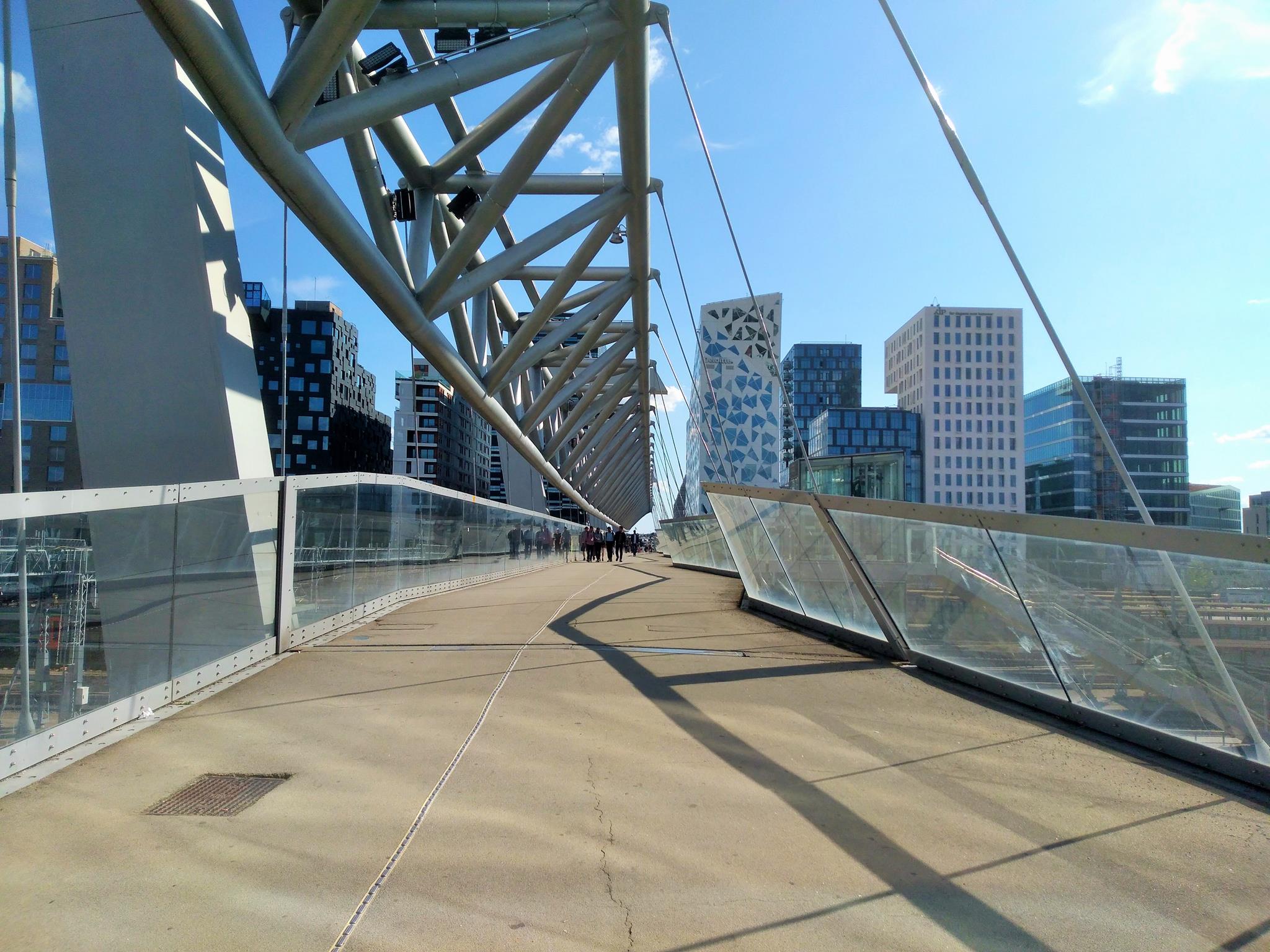 Leaving the train/bus station in Oslo heading south, AKROBA-TEN (the acrobat) is a very interesting pedestrian bridge to explore the city on foot. The structure, made of glass and steel, is 206 m long and was designed by the Oslo-Frogner-based company L2 ARCHITECTS.  The nice walk leads over the tracks at the station and reveals the view of a futuristic row of houses, the so-called BARCODE. The bridge connects the districts of Grønland and Bjørvika. The colored lighting makes it particularly attractive to cross after dark. But you can wait a long time for the nightfall in the summer. Oslo is known for its long and bright midsummer nights. There it rarely gets very dark in the city at this time of year. 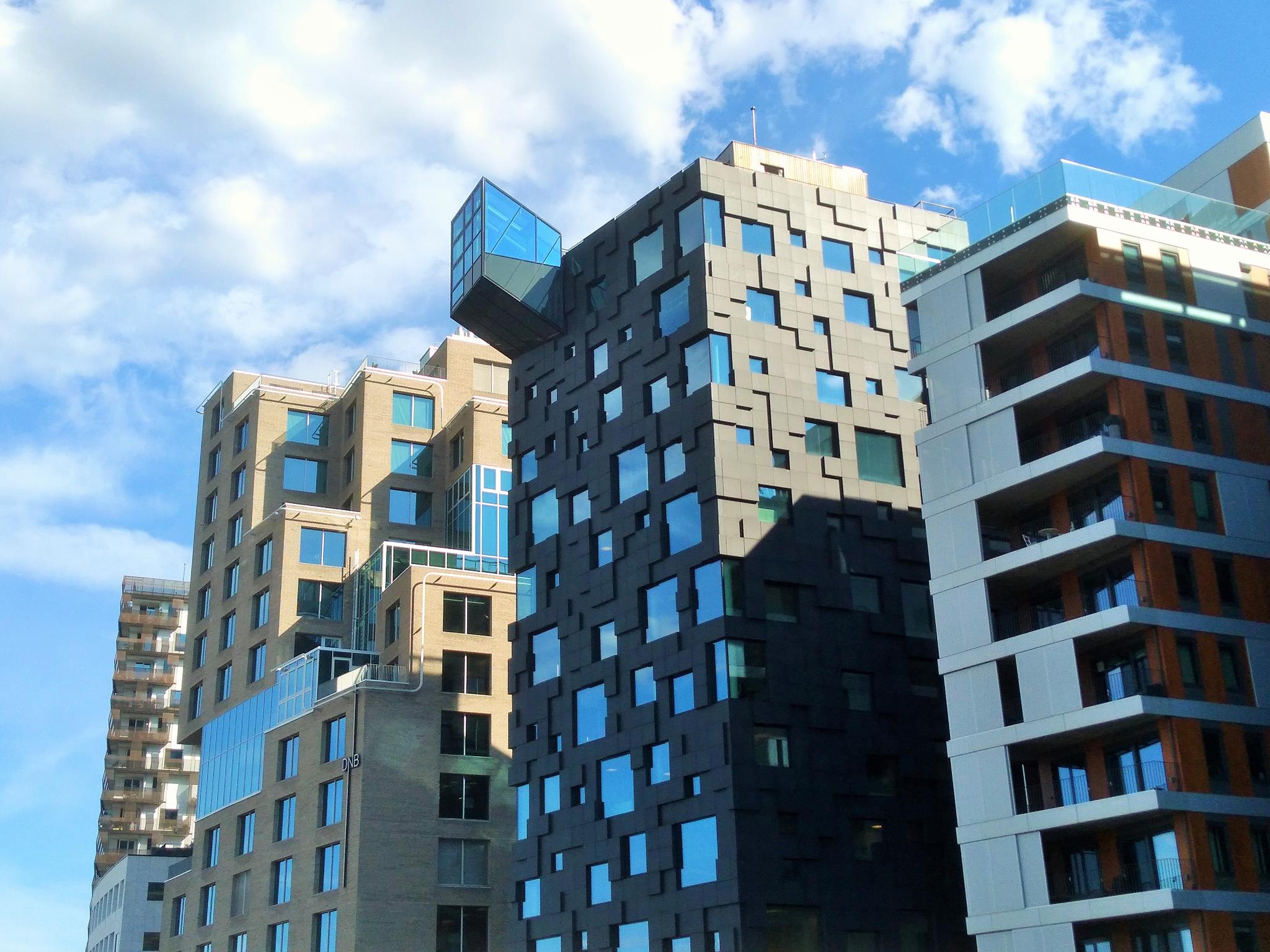 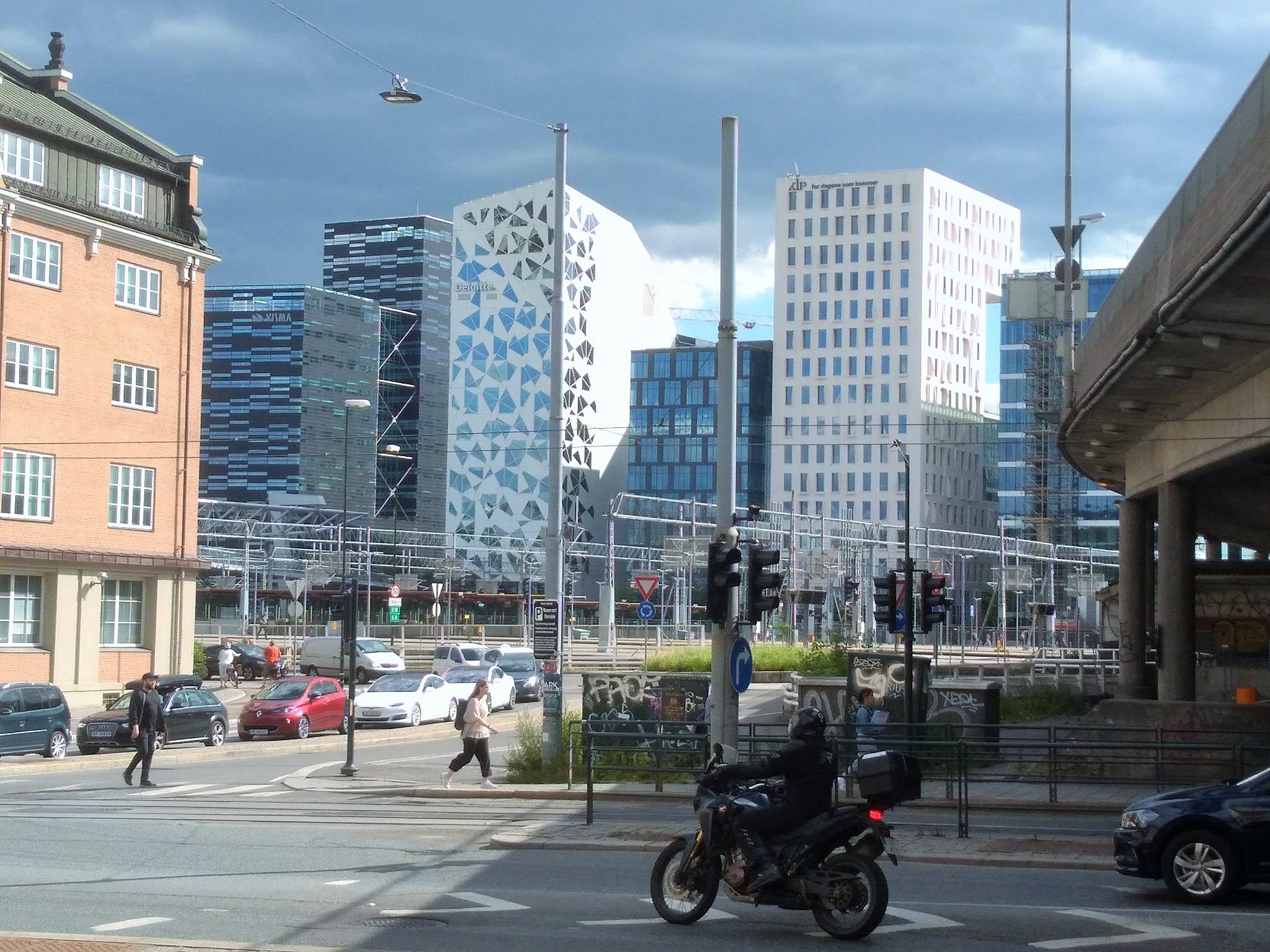 That’s why it’s worth a visit around the clock. The scenario here has something of a science fiction movie, very memorable and galactic. The BARCODE is known as an element for film sets. Who would have thought that? The BARCODE in the Bjørvika district consists of 12 skyscrapers of different widths and heights. There are undeveloped stripes between the buildings, so that they resemble a barcode from a distance. In the buildings there are offices, apartments, cultural activities as well as a wide selection of restaurants and shops. It was implemented as a series of multi-functional skyscrapers designed by different architectural firms. For example, the creatives of MVRDV from Rotterdam and the Norwegian companies DARK ARCHITECS and A-LAB took part. 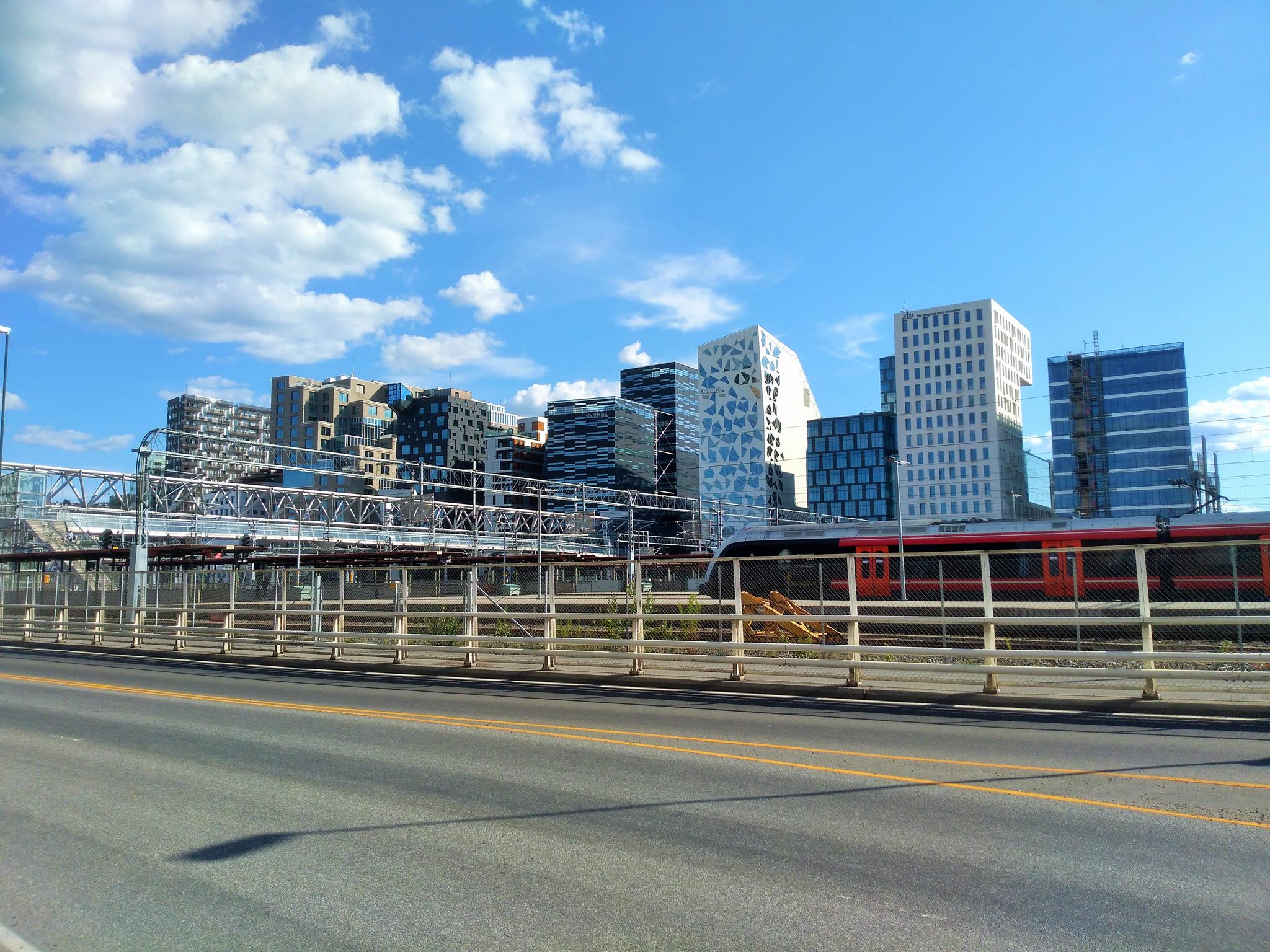 Despite the overall picture, the buildings in Oslo’s “new skyline”; are very different, with many architectural details, contrasts and special features. The concept takes into account values such as openness to the fjord, light incidence and airiness. Many architectural prizes have already been awarded for AKROBATEN and BARCODE. In the end, however, you always have to put your own credit card on the barcode, or something like that. Unfortunately, it is sinfully expensive there, but very impressive and wacky the whole thing. For me an absolute must, spacig without end. 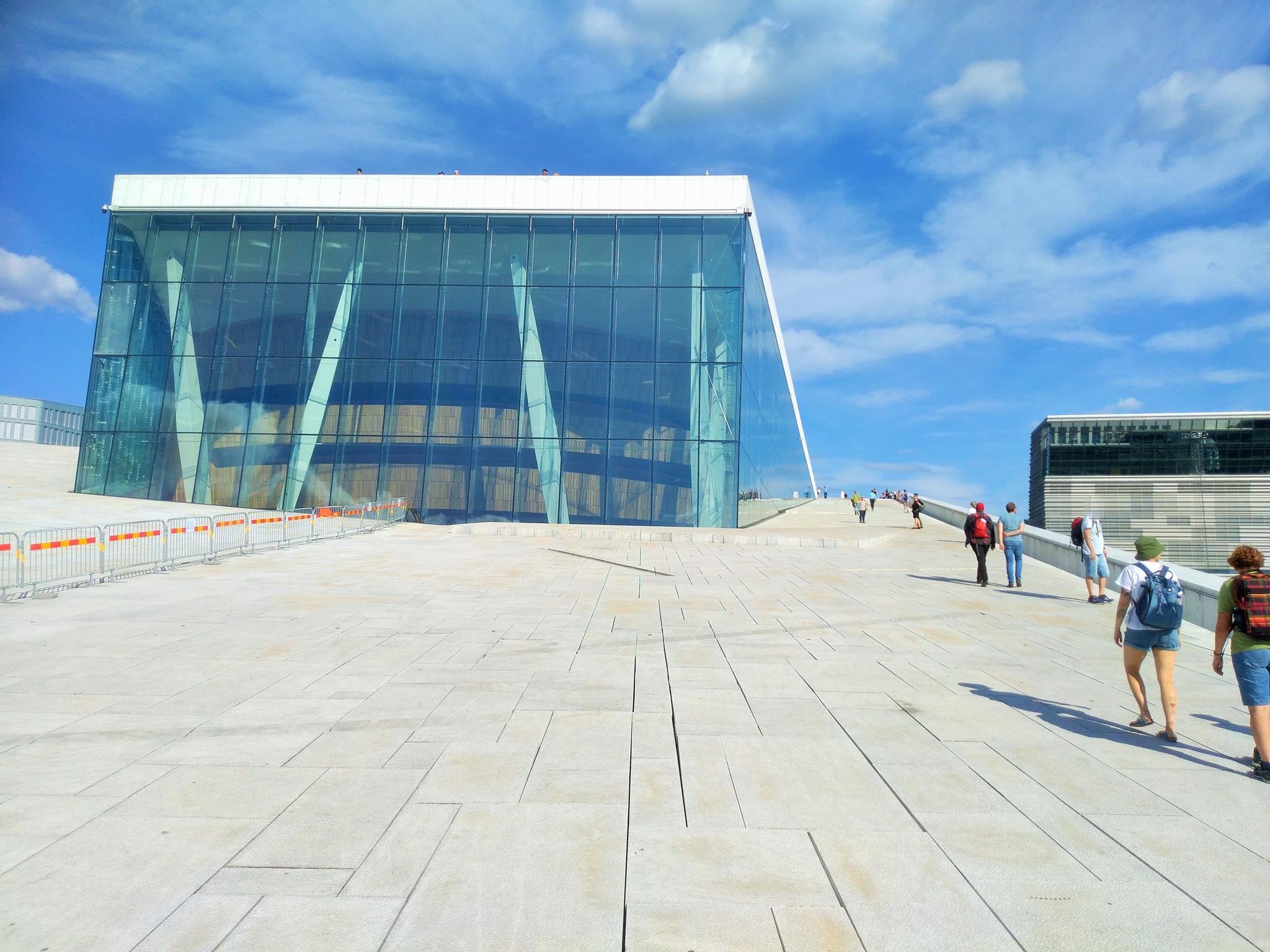 Behind it is the OPERAHUSET in the since 12. April 2008 operas are performed and great ballet takes place. Another cultural asset in Bjørvika. The opera has a special feature. The striking, contemporary building at the port can be climbed free of charge on foot and as a visitor platform reveals a fabulous panoramic view of the Oslofjord. It’s beautiful. Interestingly, there are no real stairs. The ascent is definitely fun. The building is based on a floating ice floe and was designed and realized by the Norwegian architectural firm SNØHETTA („Snowcap”). It goes well with the BARCODE. Then my credit card is also floating on an ice floe after it has been placed on the barcode. There was a lot of money involved. Hopefully not the money on my credit card. The OPERAHUSET is built of white marble. A fabulous box at the harbor. Norwegian nature is freely accessible to everyone. This was also the idea of the Italian artist and university teacher MONICA BONVICINI from Venice in Italy who recreated the painting THE ARTCTIC SEA by Caspar David Friedrich (1823) in a sculpture called SHE LIES made of iron and glass in the fjord. 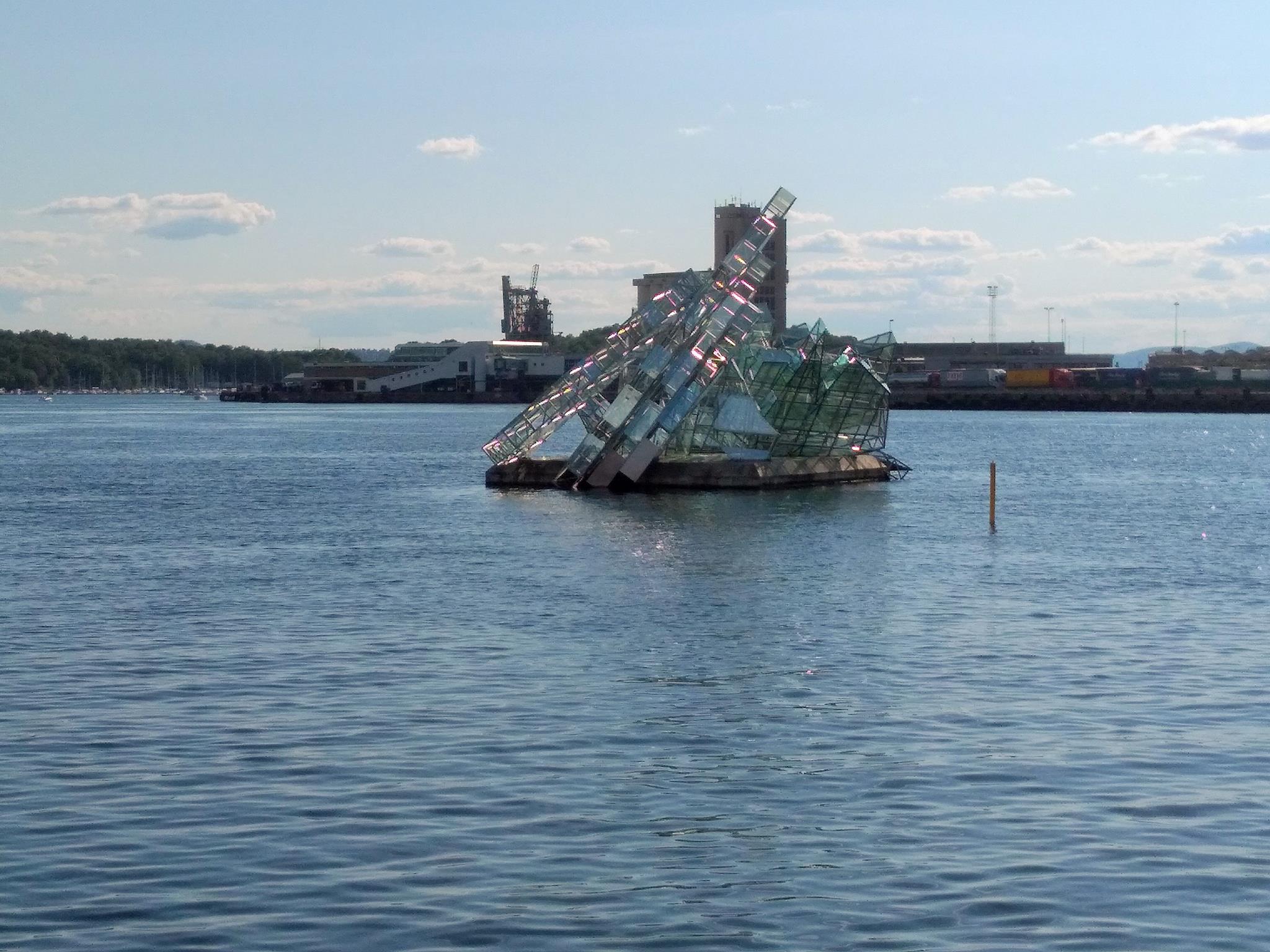 At the „Rådhus” which is a strong traffic junction, it is possible to take a ferry to the fjord islands or the Bygdoy peninsula for example to RUTER. The cards can be drawn online or on site at the machine. At a very high frequency of people, stay time should be planned. The „Rådhus” is imposing, gigantic and appears brute in its size. It combines national romanticism, functionalism and classicism of the 1930s. Only materials from Norway are used. From the fjord it is very conspicuous and serves a good orientation. The building structure in the centre alone points to the complex diversity of Oslo. Oslo has a lot of talented, young, wild and hungry architectural firms, some of which outdo each other in the construction of buildings. With the AKERSHUS FESTNING built in 1299 is also a really old monument in the harbor and give the center additional charm. The medieval castle flanked the town hall on the fjord there can be spent good time on the quay. 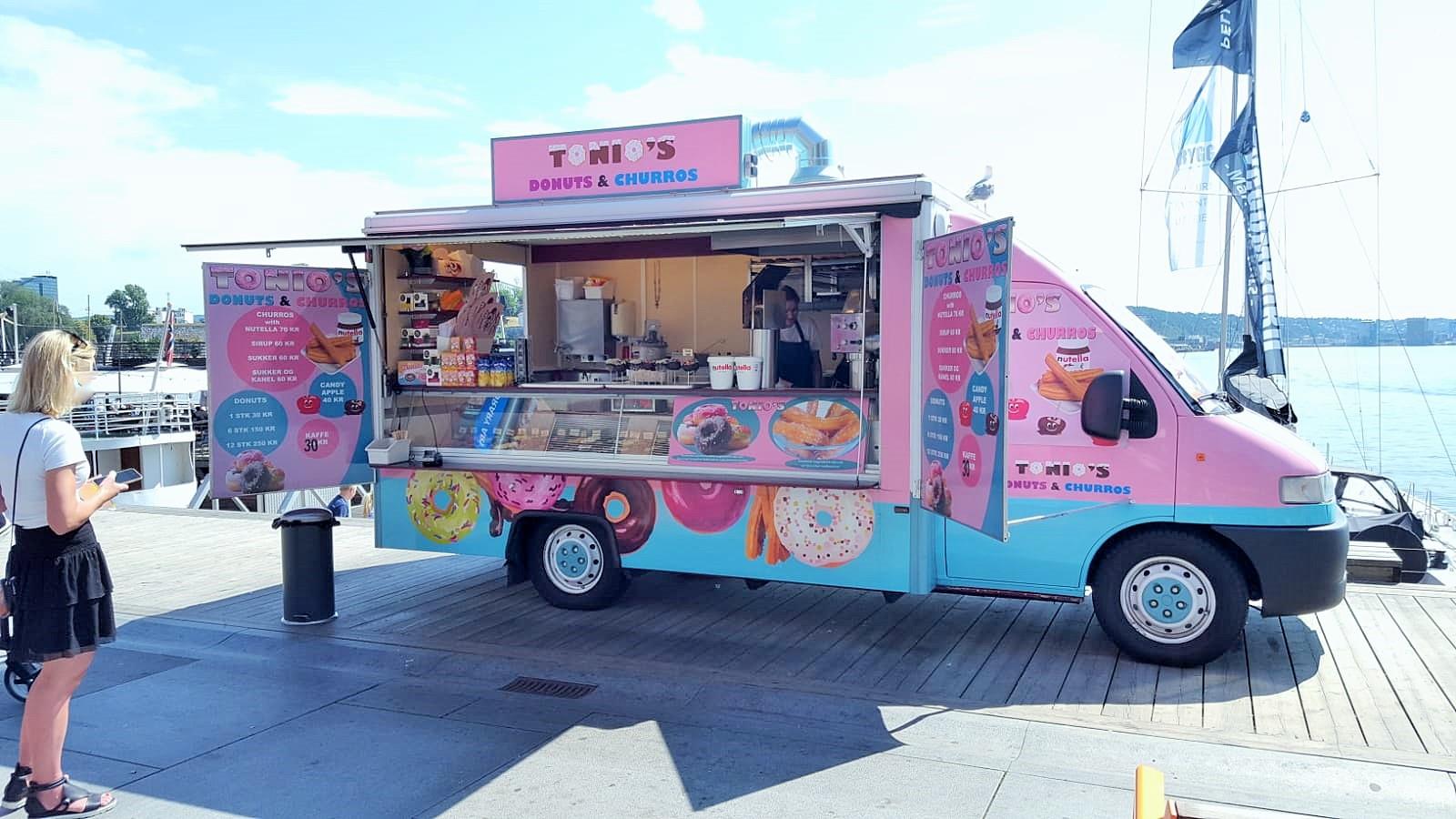 Food can be enjoyed in the expensive restaurants at the harbor. Or the street kitchen with the most diverse, stylish FOODTRUCKS on the harbor promenade is also an alternative. A filled bread roll from the baker also does it to sit here comfortably and enjoy the view and flair of the city. There are options for every budget. The food is in most cases very good and on an international level at a high level. For me, FOODTRUCKS are just as much a part of the cityscape as the electric scooters that stand around on every corner in groups, alone and partly at the most impossible locations like in the river bed or on a balcony. Electric vehicles are properly celebrated in Norway and are subsidised by the state. In no country are more e-vehicles registered than in Norway. In road traffic, the ears should be sharpened, as the e-vehicles produce a weaker background noise. Many buses run electrically. This is definitely very conspicuous in Oslo. You always have to be careful not to get run over the pile. Watching the road traffic while crossing is safer than the traffic light system. That’s for sure. 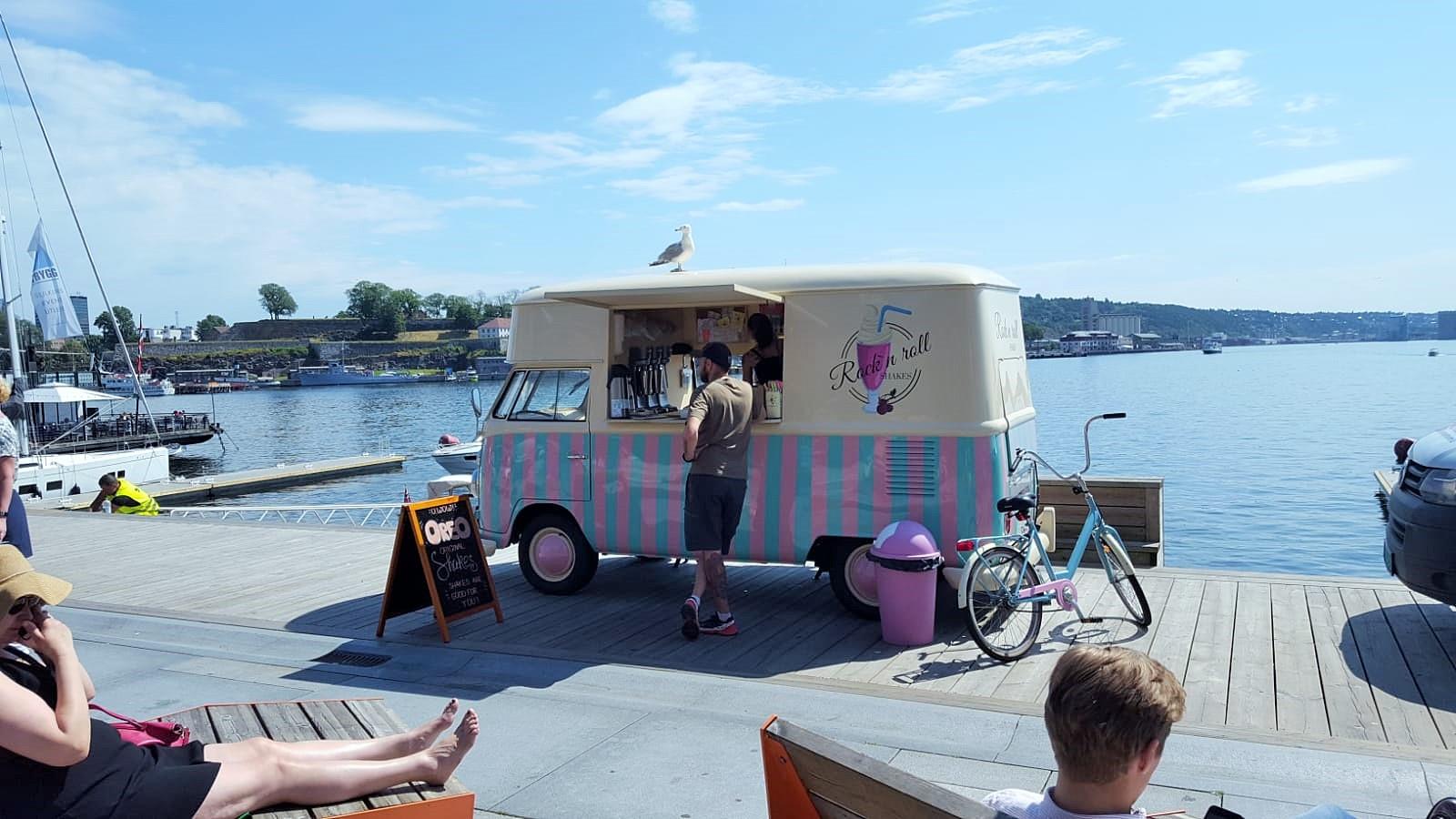 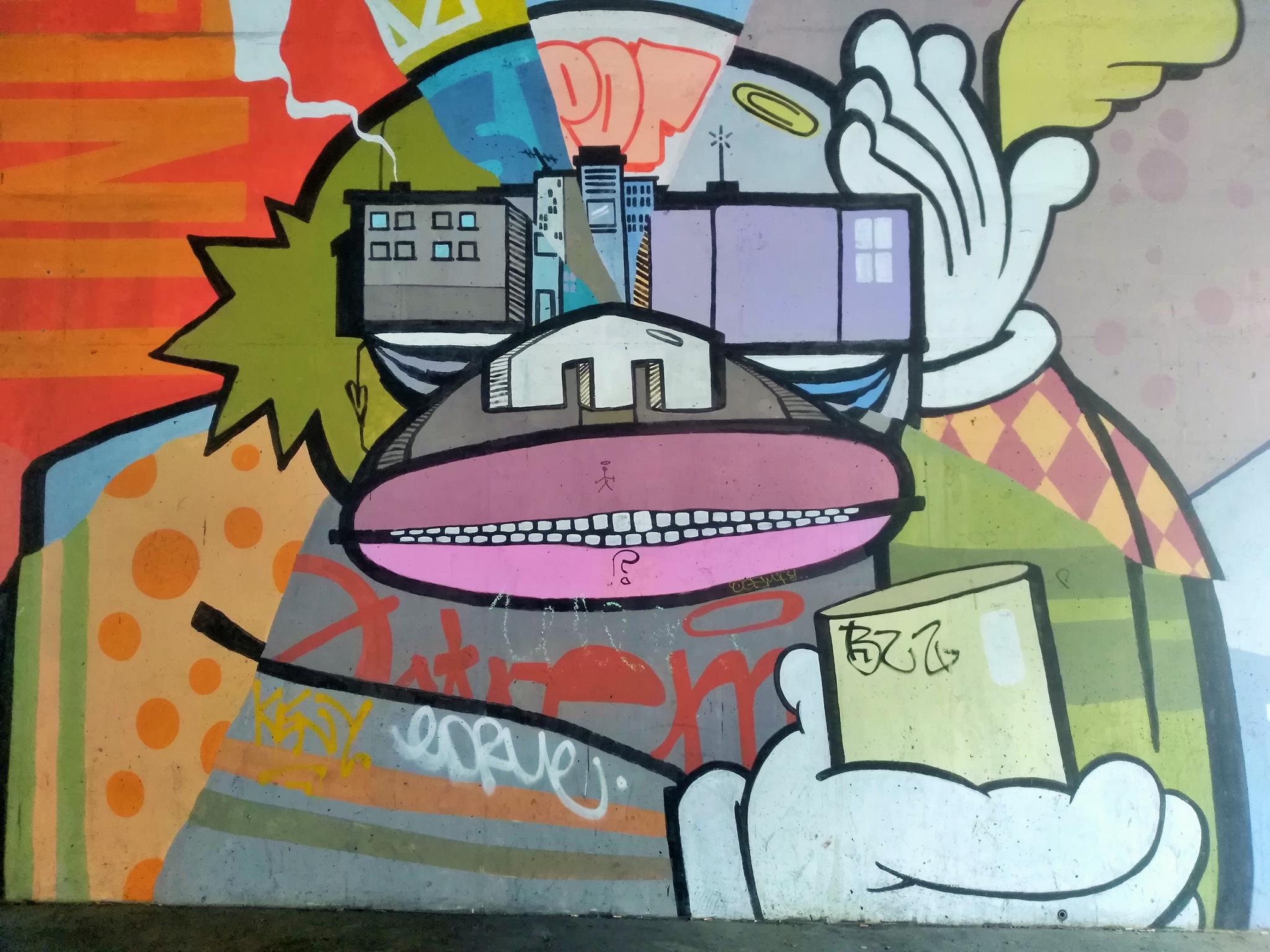 When it comes to street art, the train station and its surroundings offer really good food. Towards BARCODE there is a wall with lots of green, yellow, purple and blue stencil in portrait style. Pretty good as a prelude here on the corner. Unfortunately, some Stencil at the station have lost some of their attractiveness due to crossing. The artwork of the Stavangar graffiti artist ATLE ØSTREM at Gate 6 at the bus station in Schweigaards is also pretty cool. The man with the city in front of his eyes. Because of all this city he can’t see anything else. The Norwegian has been making graffiti since the mid 90s and has been doing well in business for over 20 years. He is strongly fascinated between the contrasts of beautiful and ugly and thus lends his figures a shared „beauglyful” character. His style combines daily life and emotions in grimly ape-like human images. The depictions are playful, gloomy, childish and provocative. As an old hand in the business, ATLE ØSTREM has perfected its fine comic style over the years. In the inner city, waiters adorn the Comfort Karl Johann Hotel in a beauglyful manner, a 3-star hotel in the pedestrian zone. Very nice spot! The waiters look nasty and pissed and ironically you want to be served by them.

Interesting is the fact that for years there was no tolerance of street art by the government. Crazy, actually, if you look at the city today. In 1996 there were still about 100,000 people living in the city. 3600 graffiti registered in Oslo, in 2002 there were just 891 graffiti. The increase in high-quality street art has been immense since then and is visibly good for the city. Oslo had a lot of catching up to do and is now trying to become a large, free art exhibition under the open sky. Which in any case succeeds super in all categories and still remains expandable. There are no limits to expansion.

Overall, international and national street artists have not let themselves be ragged at the beautification of the city. This can also be seen at the town hall market and in the harbour. When it comes to stencil art, Oslo is more than just stable. Oslo is outstanding and is home to extremely talented artists. This is also due to the bandwidth of the sometimes complex MURALS that wind along the harbor. Even in the magnificent streets of the city center really strong stencils adorn house facades. Different, diverse, colourful and impressive. There is something for every taste. That’s pretty striking about Oslo. High-quality graffiti and stencil art in a class of its own. Seal of approval pre-programmed. One of the liveliest scenes of urban art and culture can be found here in the heart of Oslo. Excellent quality. Absolutely top category. The superlatives are not enough here. 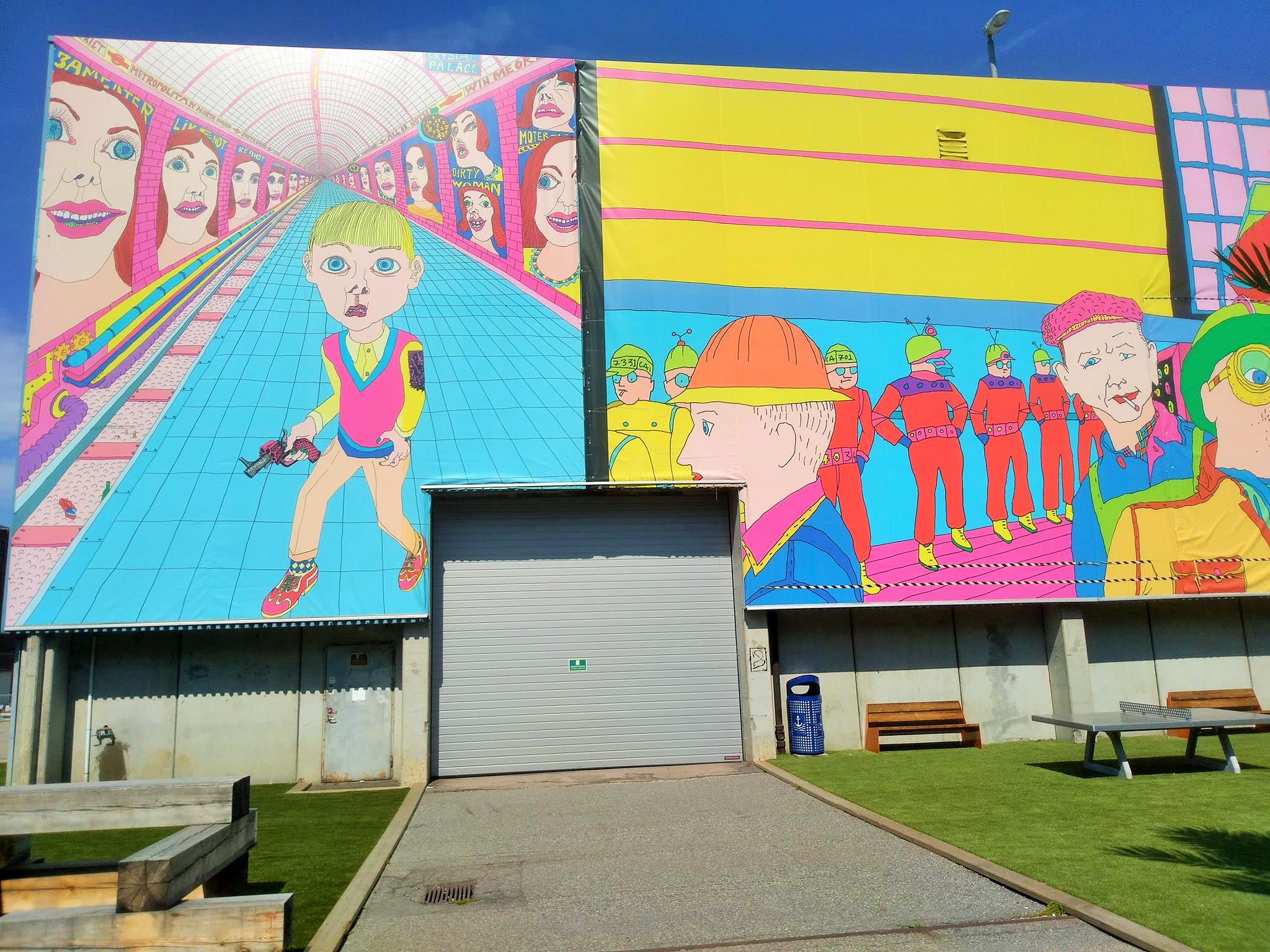 DOLK LUNDGREN from Bergen is one of Norway’s most famous stencil artists. His artwork „The Knife” (Dolk) has designed walls in many international cities. Many of his painted objects in Oslo have now disappeared. The work „Priest” from 2009 is pretty awesome but I just couldn’t find it. Actually, that was the trigger for documenting everything else about street art. In Torrgata 11 there should be the „Priest“ piece. But it just wasn’t there. The holy figure with a brush in his hand and painting himself a halo. That was one of the reasons why I became aware of street art in Oslo in the first place. And the stupid sack just can’t be found. That’s what spurred me on. The artist makes political, critical and expressive art in a very ironic and humorous way. Many see DOLK LUNDGREN on a level with BANKSY. He definitely makes excellent stencils. That’s clear.

LOGAN HICKS from New York also makes excellent stencils in photorealism. Extremely strong and very nice to look at. Most of his motifs are cities and streets at night, which, due to their realism, seem to be real and convey an interesting atmosphere. The buildings and house facades are detailed and super realistic. The stencils are extremely high-quality and elaborate. Especially in 1 Bygdoy Avenue  LOGAN HICKS created in 2011 a very nice spot called „City at Night”. The other spot shows a drunken prostitute stumbling through the harbor district. This work of art from 2015 can be found at 11 Storre Brogatan. I like his art very much and I highly appreciate it. Great, impressive pictures!

MARTIN WHATSON from Oslo is one more artist to cause a sensation in the center. Hardly any artist combines black-and-white stencil as well and skilfully with colorful tags and graffiti as he does. MARTIN WHATSON has conjured up really strong and chic things in the city. The 36-year-old artist started his stencil production in 2004. He draws his themes from the inspiration of people, destroyed walls, graffiti, posters, old buildings and maps. The subject of destruction has brought him to develop his own style and motifs. His spots at Rådhusbrygge 2 are legendary. The „Zebra” and „All White” showcase his impressive repertoire of stencil art. Really terrific. Well done, gentlemen. The center really has a lot to offer. A very strong ensemble of art, culture, ar-architecture, a lot of dining possibilities and good transfers by means of transport including ferry. It’s a worthwhile side trip. I went there every day during our stay and you can spend there plenty of time. 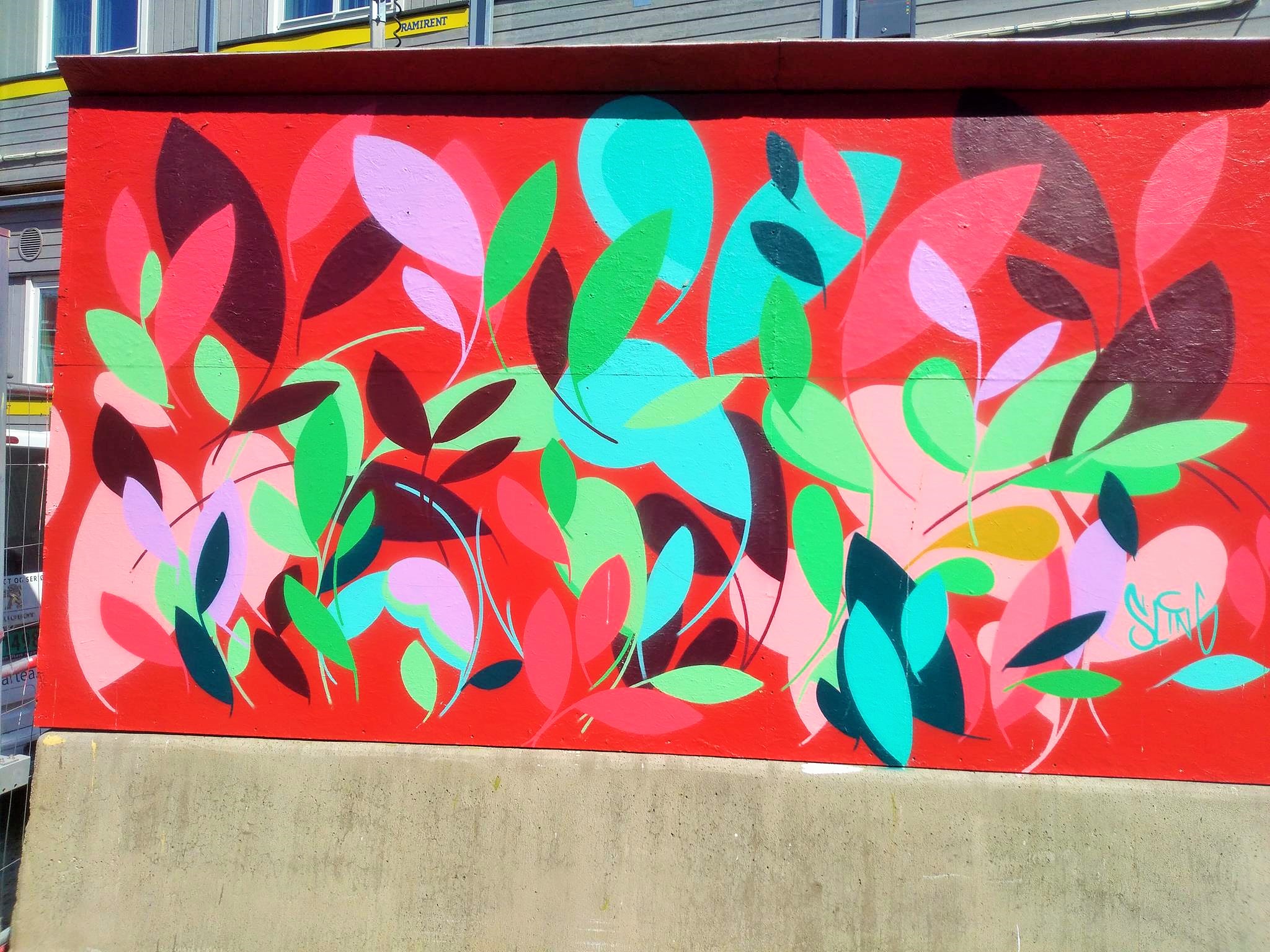