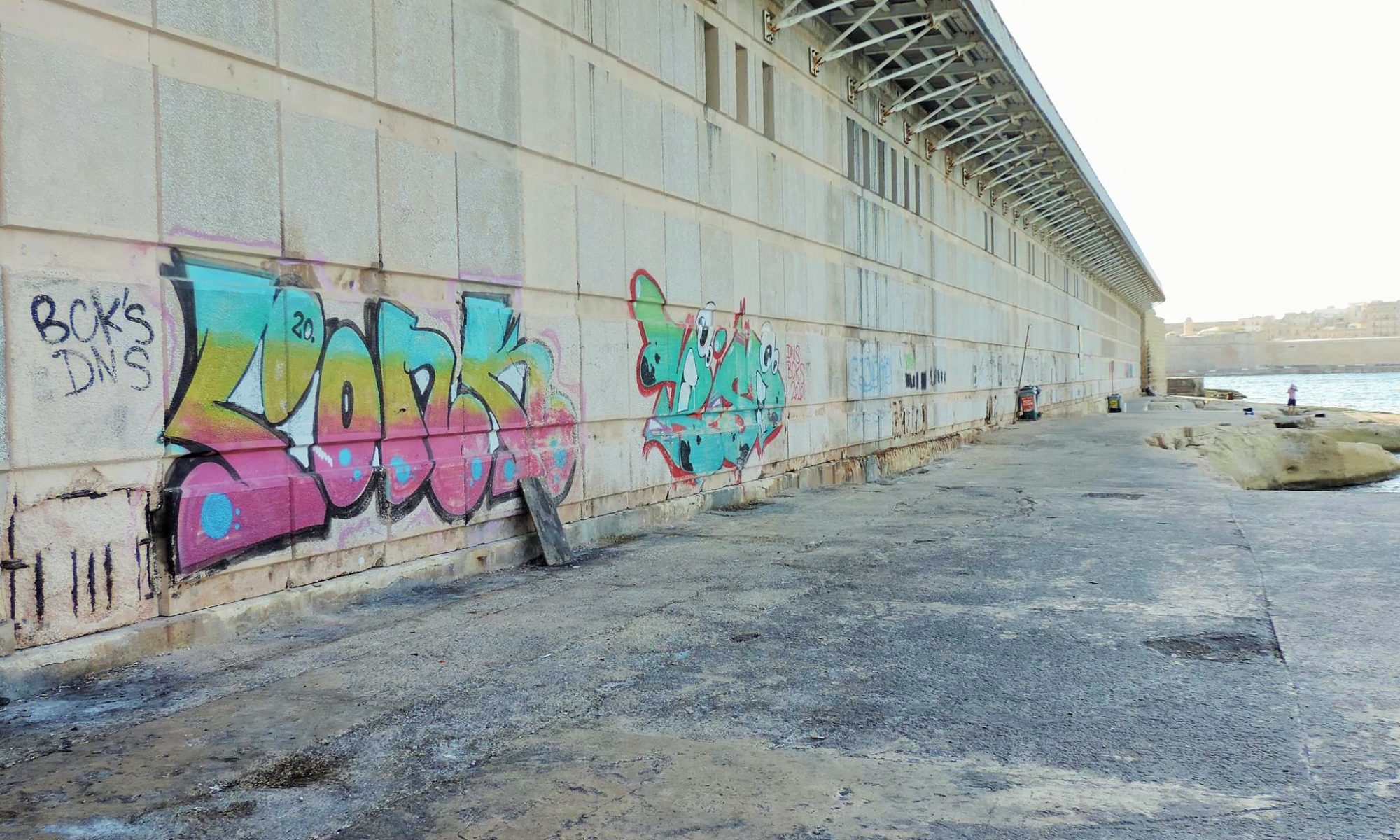 We really walked through most of the roads and along heaps of the alleys in the district Sliema. There are many beautiful buildings, old ones and new ones, sometimes even an interesting mix between both. But it was also kind of sad and depressing always to see this blank ochre or kind of color copy without trying something other. It is not a question about defacing an historical church or a medieval fortress with beautiful to ugly paintings. These buildings should for sure remain as they are. But it’s about the other countless meters of bare walls of eternal construction sites, depressing ugly bridge pillars or grey concrete block buildings that have been empty for ages. Almost nowhere you can see a bit of color out of the program. Always this monotonous ochre. Of course, we still found time by time some resistant and rebellious little gimmicks. Not great, but at least some presence. One recommendation is to walk down to the sea below the promenade at the few parts where it´s possible. There you will find some stuff left on the walls close by water.

What really hit us a lot and what also shows a some of the prevailing politics and the handling of probably art in general, but especially with the abstract and alternative form. In the Sliema district of Tower Road, a fantastic double-pack mural was created in 2015 by the French artist MTO as part of the already mentioned Streetart Festival. The real genius of the story is that the other part of the wall is not in Malta, but in Sapri in southern Italy. In Malta is just part one of the picture. A grey-bearded man climbs into a hole or tube on the first mural section at Regina Car Park in Sliema. You can see him from behind as he climbs in. In Sapri in Italy is the counterpart and you can see him coming out of the tunnel.

Through an artistically created wormhole, the boundaries of space and time are creatively blown up, but also with a clear focus on the current problematic situation of migrants who leave the island and neighbouring areas and cross the Mediterranean to find a better life in northern Europe. “The Mediterranean Door” was performed for the Sliema Arts Festival in 2015. A fabulous masterpiece of painting skill and simply an innovative idea of a different kind. The artist MTO was invited at that time to Malta by one of the island’s own top street artists, JAMES MICALLEF GRIMAUD, thanks to funds from the Sliema council. MTO wrote on Facebook as well about the artwork: “Malta takes the dead and sends the living to Italy”.

Many cities worldwide have already realized since quite a while how much art and especially urban art or street art can not only attract tourists and interested people but also contribute to a certain fame for the place. Malta has not yet understood this to some extent and probably does not want to do so any time soon. Malta is in many ways rather conservative. It really hurt our souls when we saw the mural during our visit in August 2020. And remember briefly the sentences I had written before. The whole island is teeming with bare walls. Exactly on THIS spot of the great mural with the man climbing into the hole, exactly on this spot a annoyingly stupid advertising poster was paved as well with the words “Have you got what it takes?”. Considering the numerous blank walls around it is just clear that it was placed exactly there on purpose. Apparently the wall belongs to the real estate company Simon Mamo and it is a poster of their own.

As an explanation, it was made public that this wall would soon disappear anyway and that the existence of the wall, which was initially conceived as only one year, was now tolerated for more than four years. What a gossip. It made us really angry at the moment and also showed us a look at the handling of the Maltese authorities and companies. Also many locals were not that happy about the situation. Over the years, this large portrait has become a world famous work of art and a special artistic landmark for the locals, of which most are also proud.

“It was the only sign of hope amid a sea of concrete.”

“There’s hardly any other notable street art in the town.”

Two quotes from Sliema residents told to Times of Malta.

Artist MTO’s answer told to Times of Malta: “Savagely covering a political mural speaking about migrants struggles to cross Mediterranean sea with an ugly real estate advertisement which looks like it’s getting out of the character’s butt couldn’t make more sense”.

This here is the gallery about what we found on our graffiti hunting tour while exploring as well the city and the different suburbs itself. Of course you would need more time to really get into it and find out what it is all about in every place. But here is what we got together in August 2020. To the main article you get here: Streetart Malta.