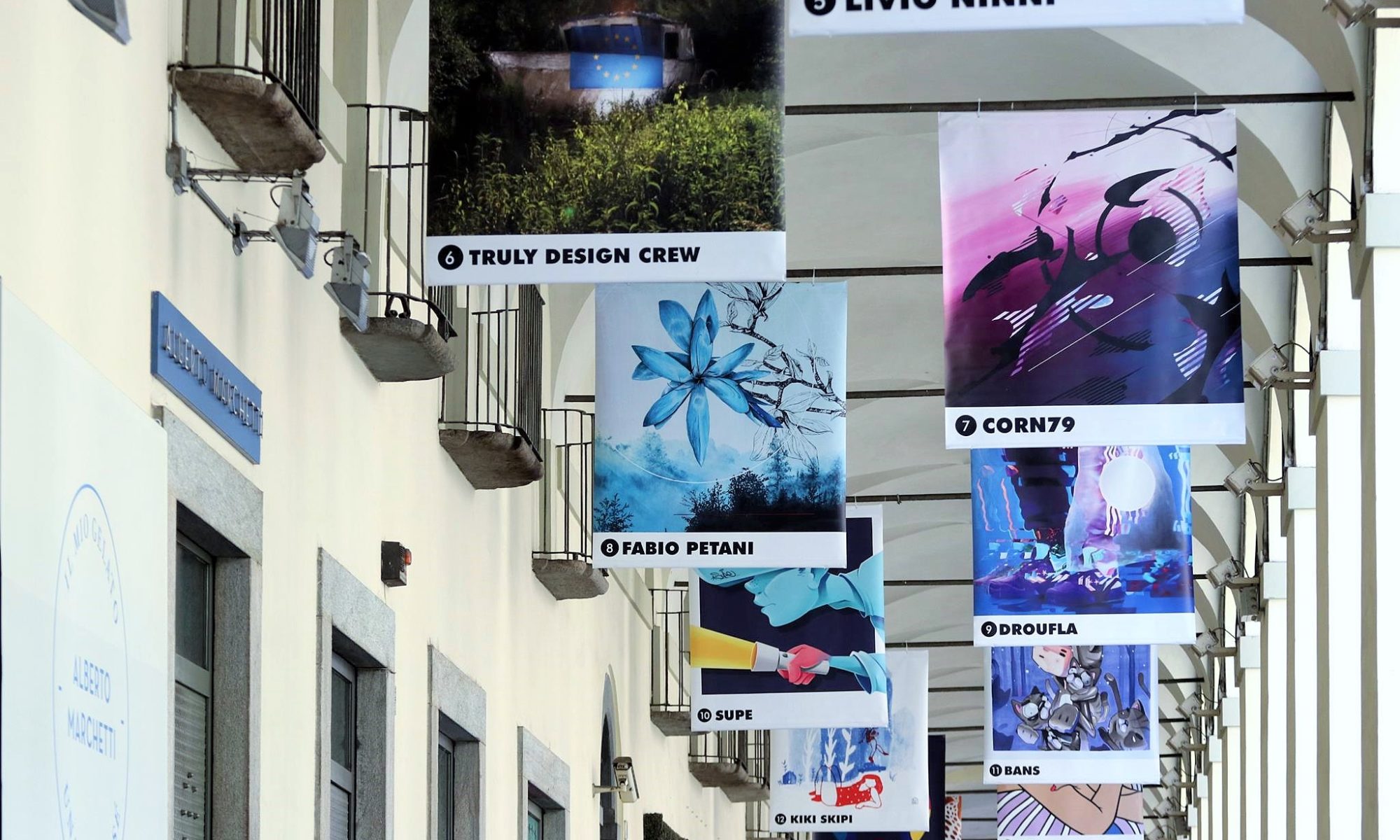 “Spazio Portici – Creative Paths” is a project of the City of Turin, Creative Turin and the Contrada Torino Onlus Foundation. The goal is to open spaces for artistic expression under the arcades of the city, focusing attention on the enhancement of creativity with a particular focus on youth. Along the 12 kilometers of arcades will develop over time installations, exhibitions, temporary exhibitions, artistic happenings in order to create a traveling visual path that will help give new life to the arches and to value creativity. “Spazio Portici – Creative Paths” is not only a new dimension of artistic expression but also a projection of the future of art, integrated with urban spaces in a non conventional. The open-air gallery was strongly desired by the Department of Rights, Youth and Creativity of the City of Turin. Meanwhile the 1st edition and the 2nd edition took place, the 3rd edition for 2022 is in planning. 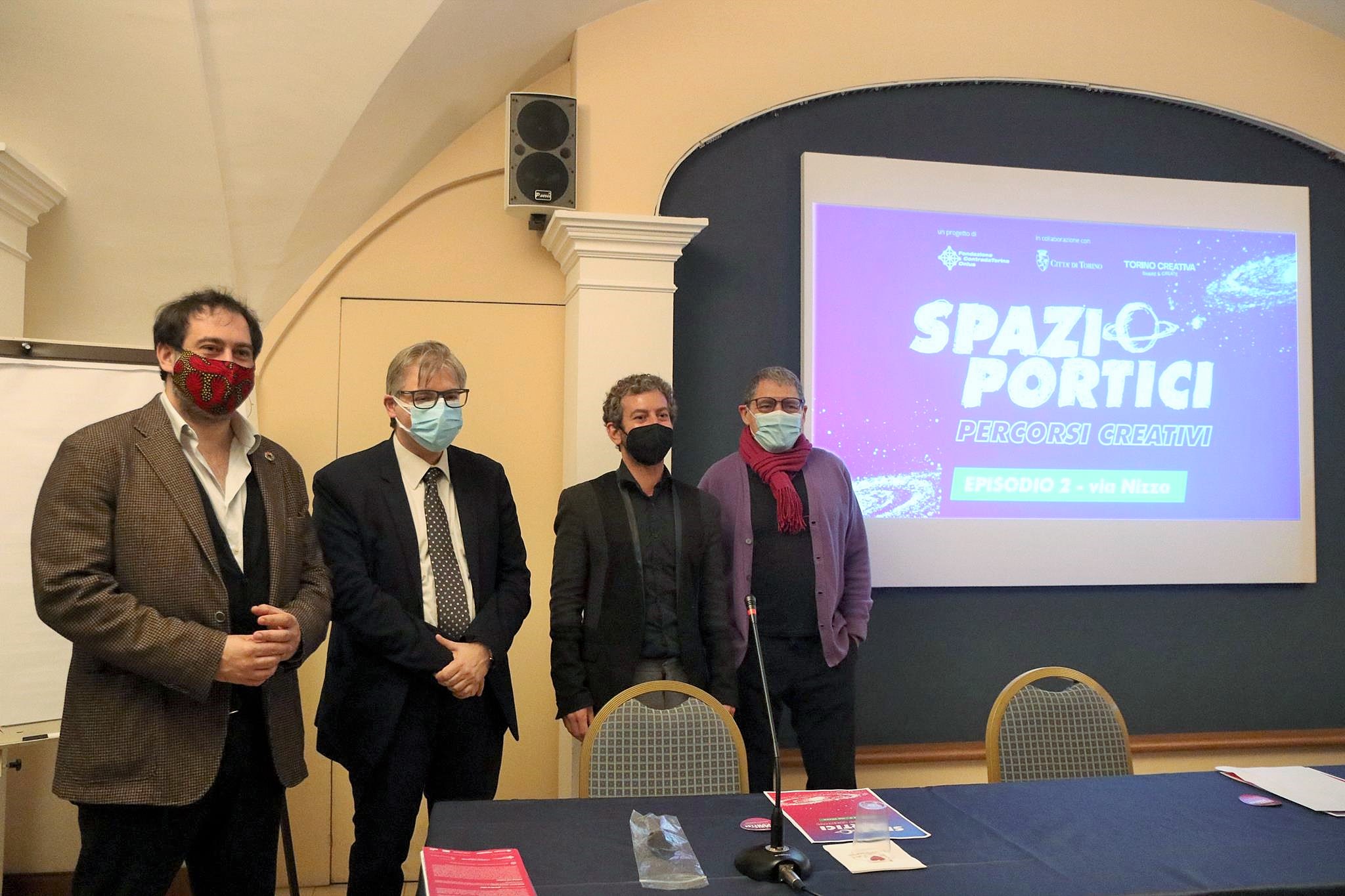 Councilor Marco Alessandro Giusta in fact declares: “A city that wants to grow collaborates and synergistically brings together the public administration, private individuals, young professionals, traders, foundations and other stakeholders in the area, creating new social networks, connections between the center and the periphery, imagining areas of development. Spazio Portici was born from this overall vision and brings with it a broader value. It is not a simple gallery but an urban transformation project that enhances the creative profession and that focuses on young people, their vision of the world, the environmental and social issues they face. The arcades are, today as in the past, the scene of writings, political and amorous messages, which represent forms of expressiveness, manifestation of conflicts and protest. I am convinced of the importance of breaking away from the rhetoric of decorum and addressing the theme of spontaneism, enhancing its artistic component and giving it the opportunity to have recognized spaces for expression, also for the benefit of trade and tourism. 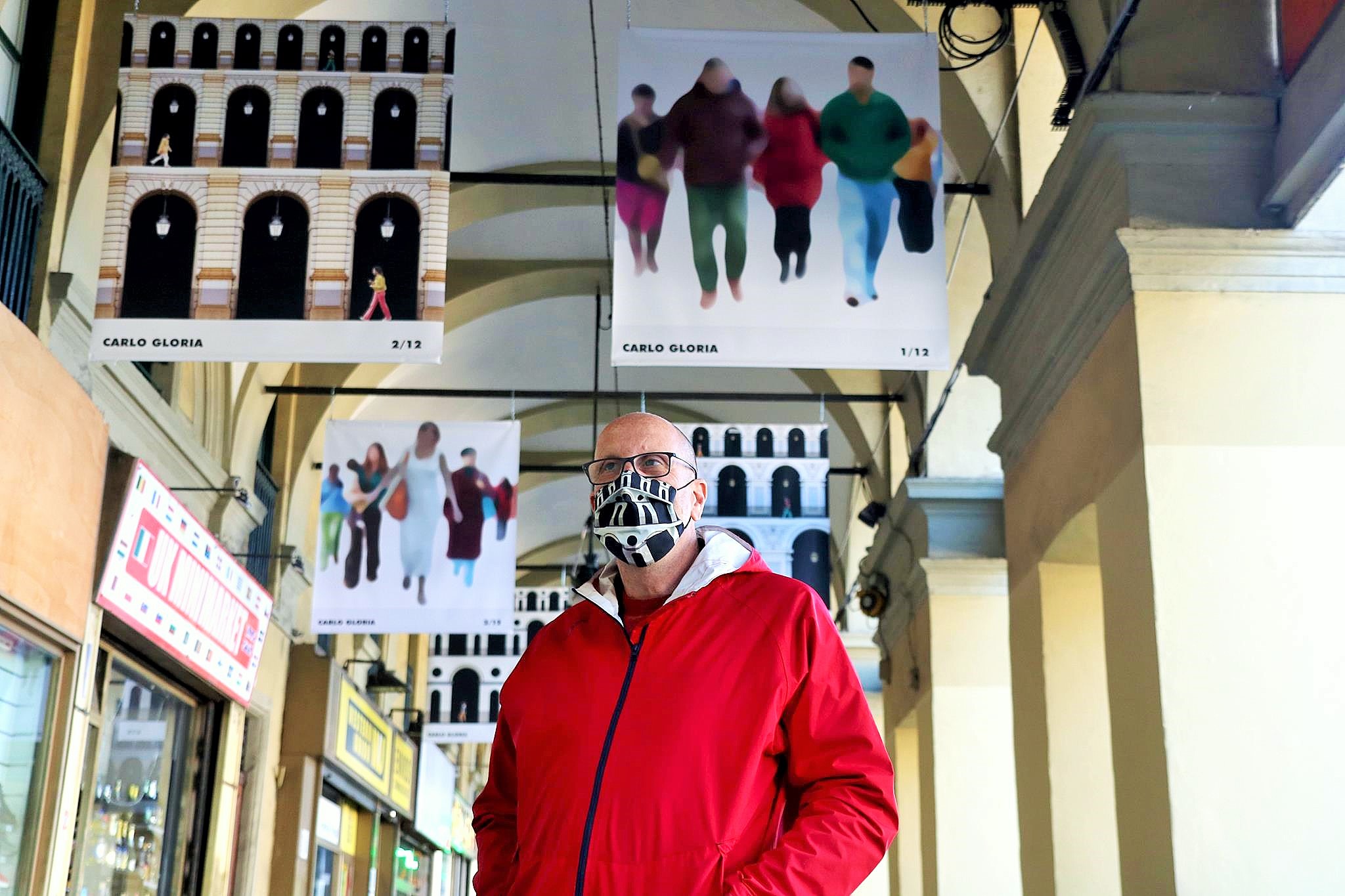 Art is fracture, it is vision, it is freedom. Saype proved it to us last week with his work. As well as Toward 2030, Beyond Walls, Campus Diffuso, ToNite, Casa Bottega, projects carried out in public-private partnership, Spazio Portici is an important element that recognizes youth creativity and policies aimed at young people as essential elements of development, building growth and exchange with the rest of the world, creating opportunities for meetings between the subjects of Turin culture and art and young professionals, offering citizens the ability to (re) read the daily life that art and entertainment in public space they represent and, last but not least, recognizing the professionalism and work of and artists at the service of enhancing the city, the communities that live there and tourism. About a year ago, at the request of the Mayor, the Contrada Torino Foundation, together with the Merchants association of via Po, conceived and designed an extraordinary three-phase plan for the recovery of the arcades. Extraordinary as the cleaning and maintenance of the porches are normally the responsibility of the owners of the buildings. The propulsive thrust, characterized by the recovery of the beauty of the arcades and in the setting up of this open-air gallery, was supported by Iren and Lavazza, and aims to become a model to be applied also to the other Turin arcades, starting from via Nizza, via Sacchi and via Cernaia already involved in the process. I am therefore happy to inaugurate today a new city public gallery, Spazio Portici, where contemporary art and youthful creativity find their place within a space of historical beauty.” 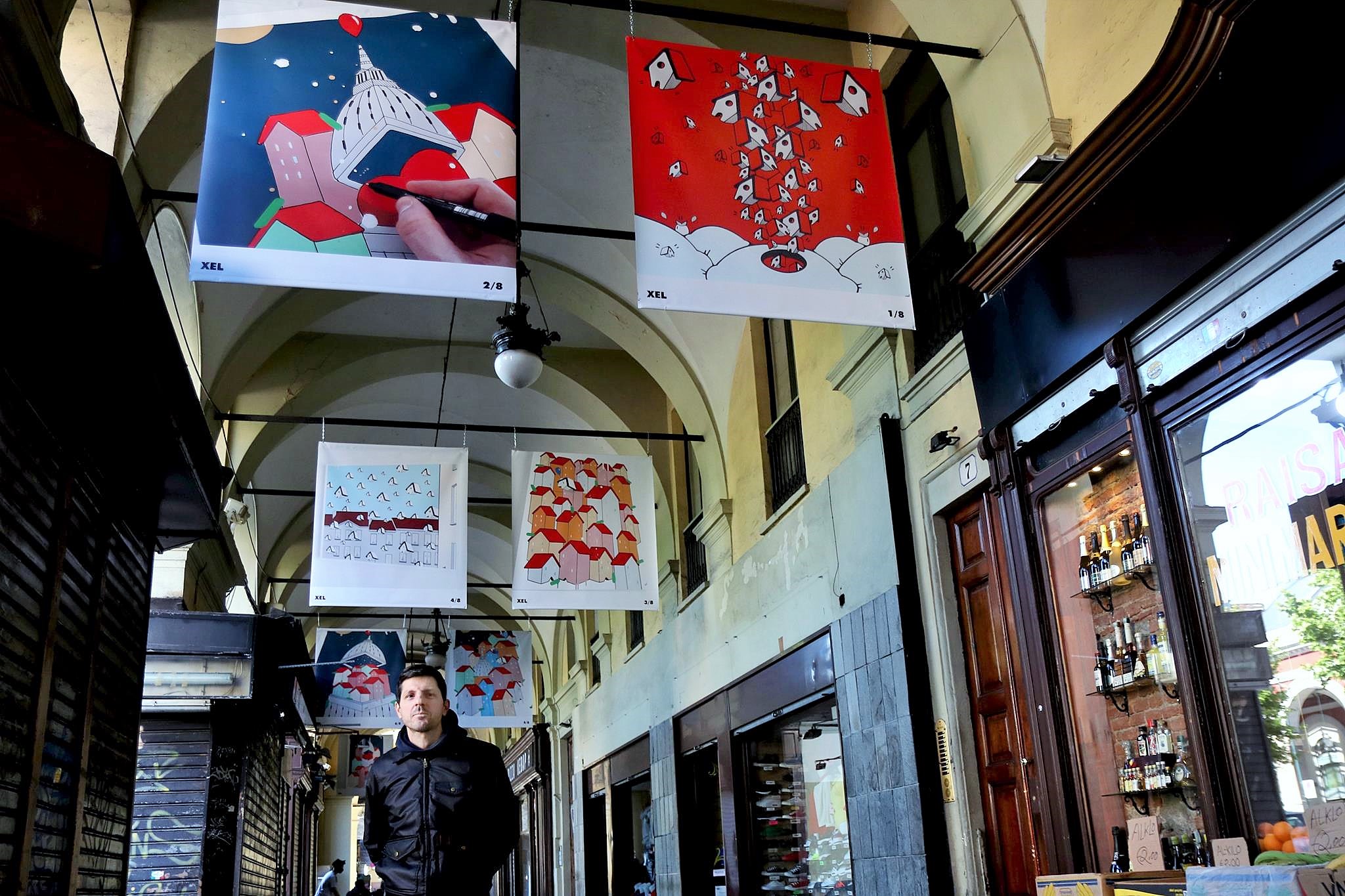 The project is organized and managed by the Contrada Torino Onlus Foundation, which has already been involved for many years in the enhancement of the city’s arcades and which has recently coordinated the cleaning of via Po, via Nizza, via Sacchi and via Cernaia. “A new and exciting challenge is starting today to enhance the arcades of Turin. Bringing art under the 12 kilometers of arches that constitute one of the most important cultural heritages of the city”, declares Germano Tagliasacchi, Director of the Contrada Torino Onlus Foundation. “In the logical continuation of the various activities conducted over ten years by the Contrada Torino Foundation on the theme of the conservation of cultural heritage and public art, a fruitful combination of intent materializes with ‘Spazio Portici – creative paths’. 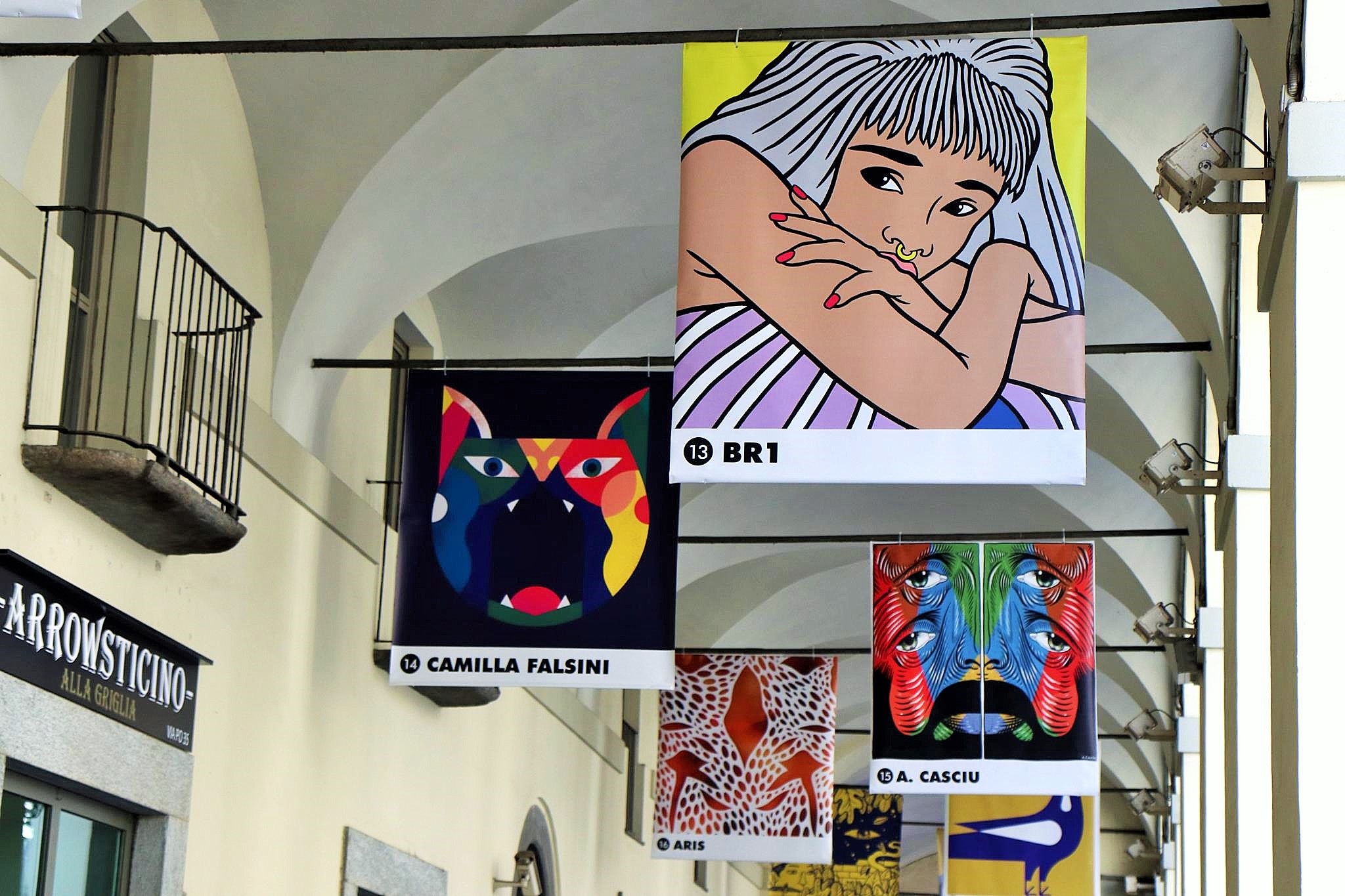 Promote an unusual use of this urban gallery, unique in Italy, thanks to the creativity of young talents and with it support, in such a delicate moment, the public space and its main functions: sociality, inclusion, the transmission of knowledge , the improvement of the perception of urban quality. An itinerary begins that over time, in the various arcaded contexts, will bring artistic suggestions that will have to increase the attractiveness of the individual paths to the advantage of the entire system. The prologue is particularly interesting as the community of urban artists presents itself to the community in a different way with respect to their performances in the public space. Interventions that have contributed to making Turin one of the European capitals of street art. This feature highlights their commitment to supporting concepts and attitudes fully included in the best expressions of contemporary visual arts and, last but not least, to mark the evident current difference between spontaneity and professionalism.” 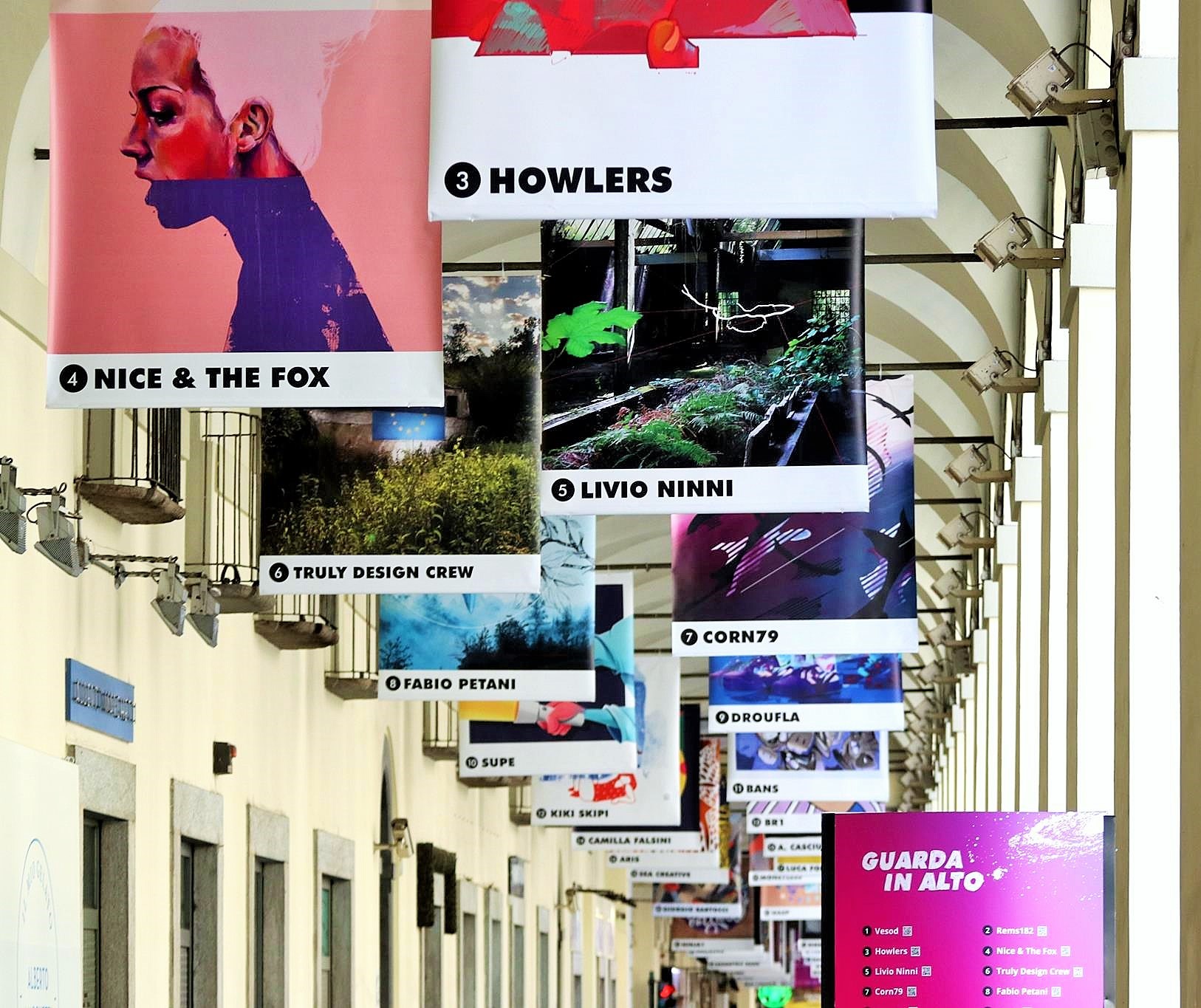 For several decades Turin has been interested in the development of the graffiti-writing culture and its evolution that follows various declinations. Examples are the numerous works, scattered on the walls of the city, by national and international artists. It is precisely for this reason that Spazio Portici – Percorsi Creativi was inaugurate with the disruptive creativity of urban artists, from Turin and Italy, coordinated by the curatorship of Roberto Mastroianni, art critic and curator, in collaboration with the Turin cultural associations “Il Cerchio e le Gocce” and “Monkeys Evolution”who handled the selection of the artists. 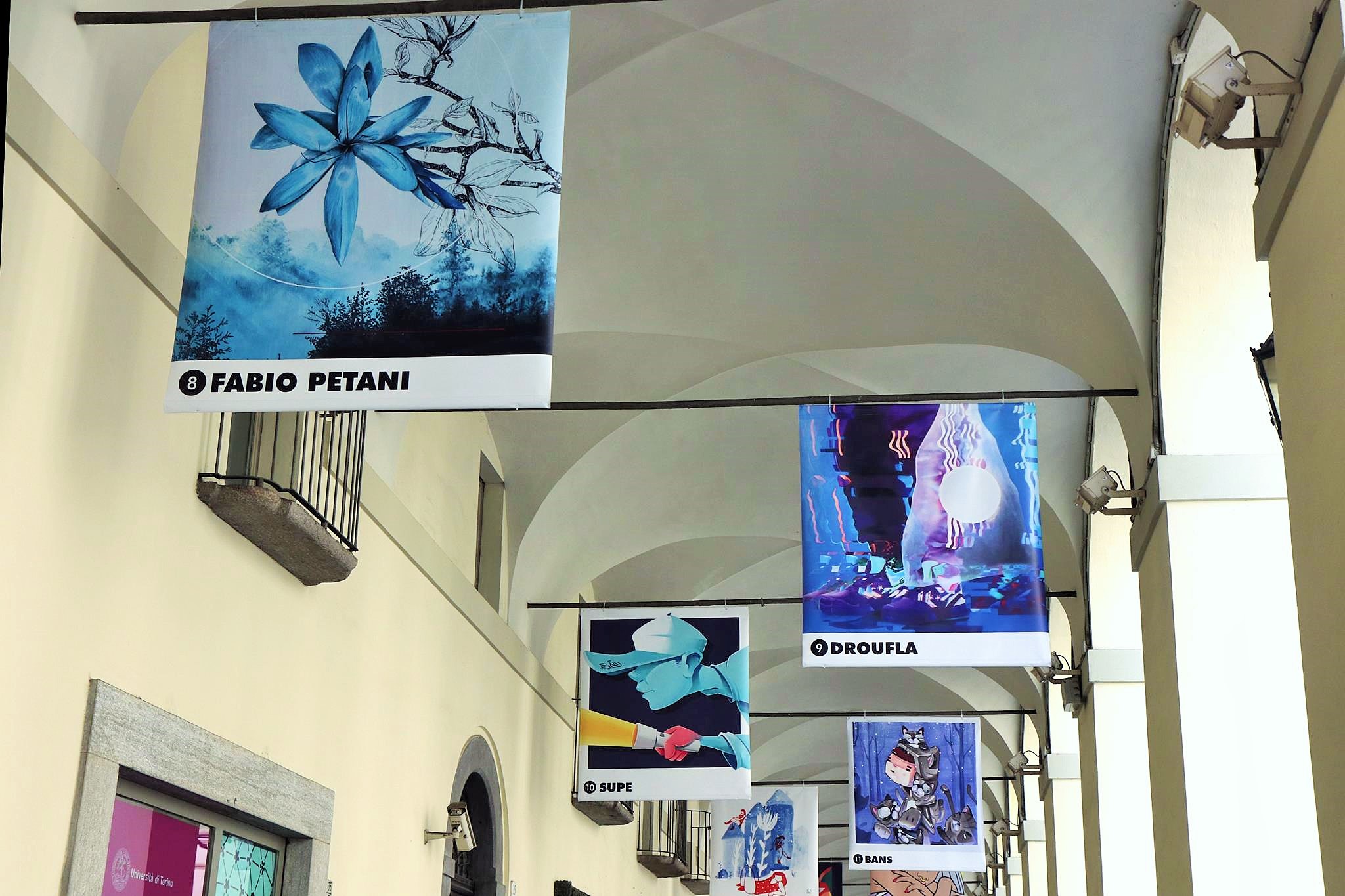 “In the twentieth anniversary of the ‘MurArte‘ project and in the tenth anniversary of the ‘PicTurin-Mural Art Festival‘, which allowed Turin to become – first among the Italian and European cities – a laboratory for the institutionalization of Graffiti-Writing and one of the European capitals of Street Art and Urban Art, the first open-air gallery of urban art and creativity is born: ‘Spazio Portici – Percorsi Creativi’. Within one of the most important architectural and cultural contexts of the metropolitan fabric, there is a sequence of banners, on which a photographic rendering of works by Turin and Italian Street Artists and muralists is exhibited in a temporary exhibition with a museum character”, explains Roberto Mastroianni, Art critic and Curator of the exhibition itinerary. “Turin is crossed by an open-air gallery of ‘pieces’ that represent Graffiti-Street-Urban Art in its evolution from a counter-cultural phenomenon to a globalized expression of contemporary art. 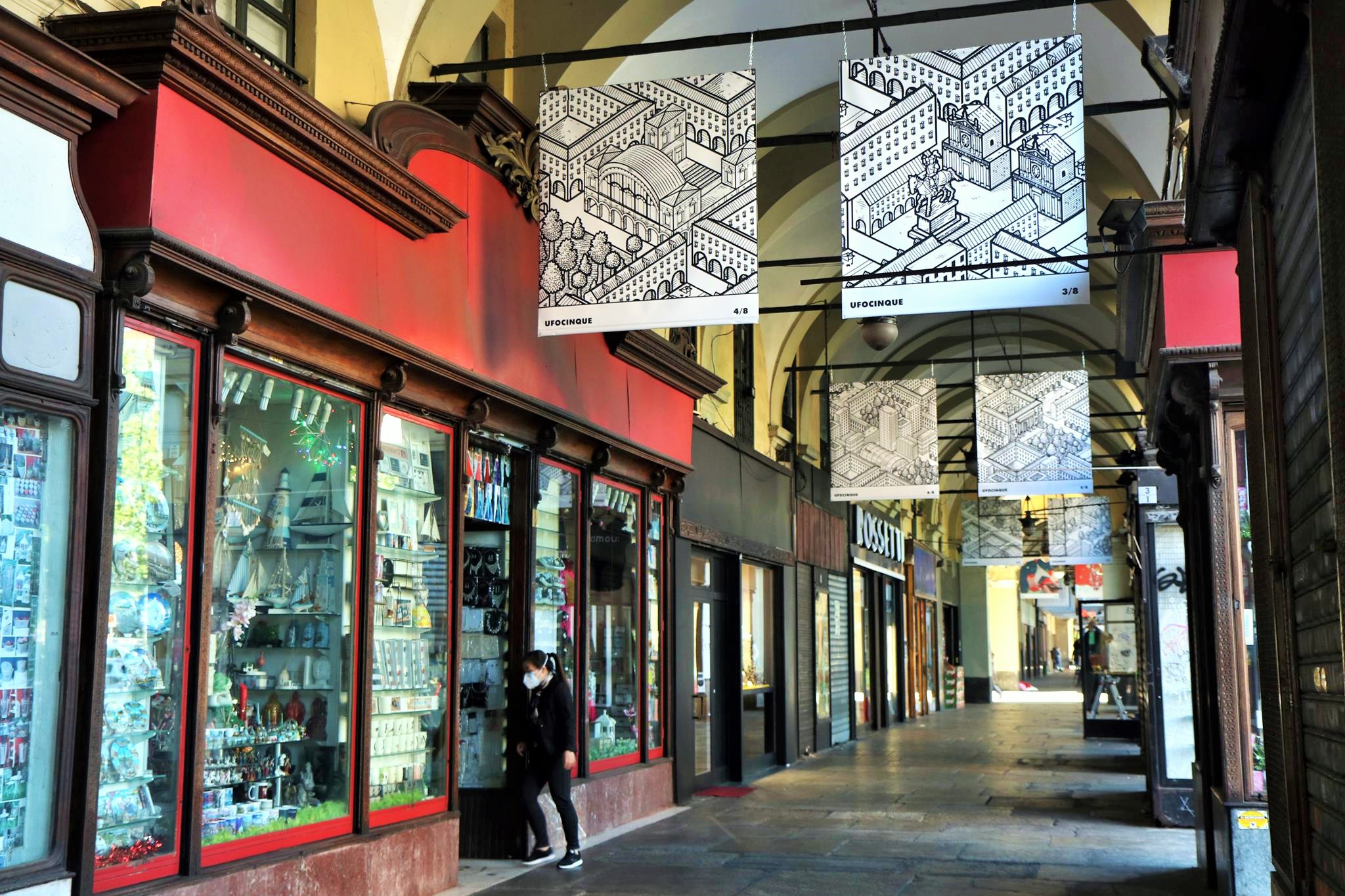 If the many site-specific works scattered around the city, produced by those who were once the ‘terrible kids’ of graffiti and who are now artists or designers of international importance, represent an exhibition that has taken shape through processes of institutionalization (‘MurArte‘), international festivals (‘PicTurin‘) or social communication projects created in synergy between public or private entities (ex. ‘Toward2030. What are you doing?‘),’ Spazio Portici – Percorsi creativi ‘represents the place where whose languages ​​are born in the street, embodying youthful and metropolitan creativity, to become autonomous works of art. In fact, this temporary exhibition stages a selection of works, created by the three historical crews (Truly-Urban Artist, Monkeys Evolution and The circle and the drops) and by some of their fellow travelers who work in other urban contexts. At the same time it dialogues with two other Temporary Exhibitions (‘TOward2030’ and ‘Beyond Walls‘) hosted in the spaces of the Turin Royal Museums and with Saype’s site-specific Land-Street Art in the gardens of the Porta Palatina. Styles, languages, shapes and colors of the images placed on the upper part of the arches kidnap the gaze, forcing the passer-by to dwell on a part of this urban imaginary, which has now become widespread aesthetics, prompting him to trace in the continuity and recurrence of styles and codes a ‘family air characteristic of’ a Turin school ‘of Urban Art born in the street, nourished by counter-culture and today it has become an integral part of our global imagination.” 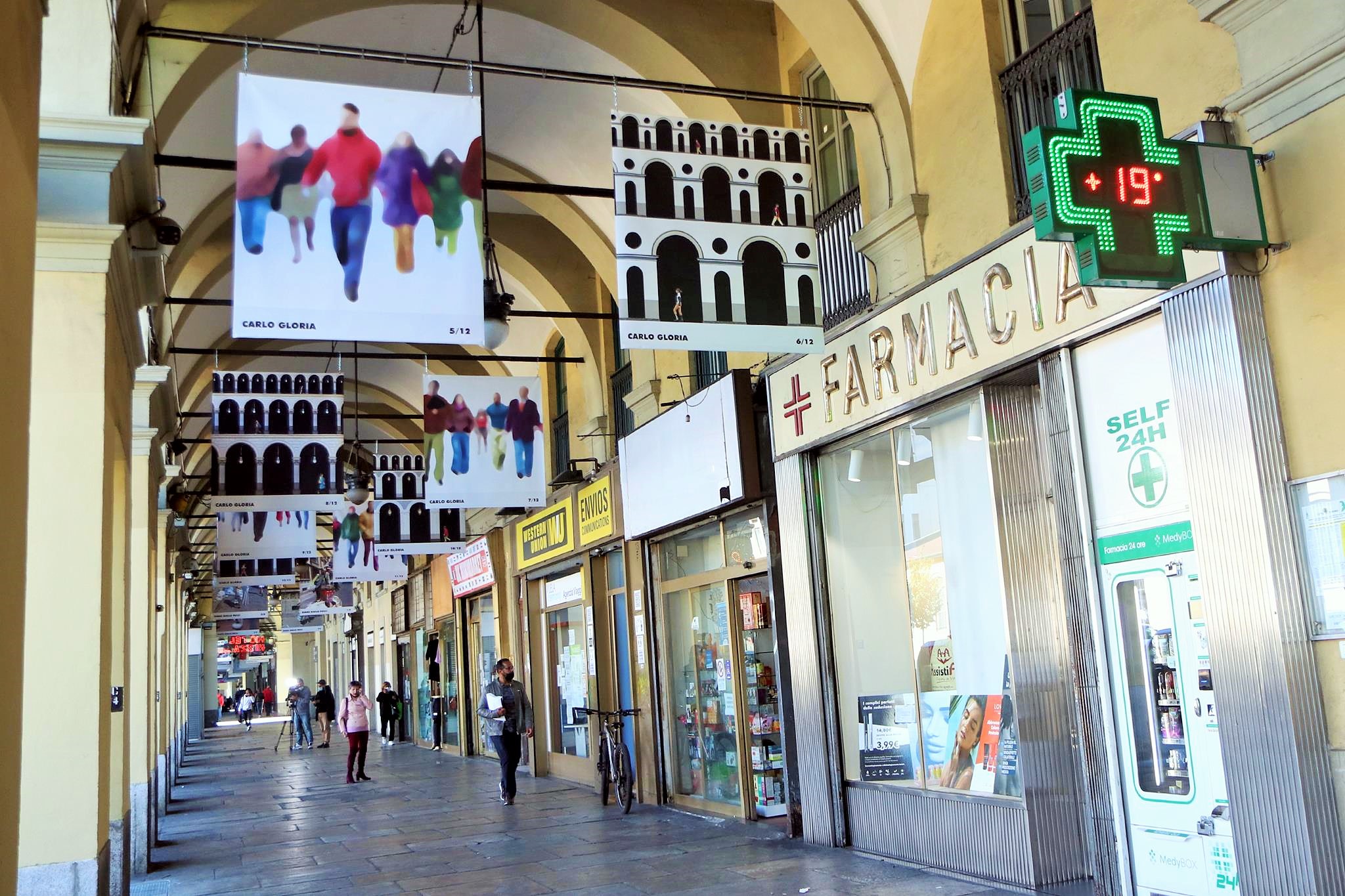 The project, starting from via Po, starts a path that, thanks to the next contributions of the visual and performing arts, will gradually animate the arcades of via Nizza, via Sacchi to extend to all 12 km of arcades in the city of Turin. The artists who will be the first to see their works displayed in this new open-air gallery are: 108, Abel, Andrea Casciu, Aris, Bans, Br1, Camilla Falsini, Corn79, CT, Diego Federico, Droufla, Encs, Fabio Petani, Geometric Bang, Giorgio Bartocci, Howlers, Kiki Skipi, Livio Ninni, Luca Font, Mach505, Mauro149, Moneyless, Mr Fijodor, Nice and the fox, Ninja1, Rems182, Sea Creative, Shekoo, Supe, Truly design Crew, Vesod, Viola Gesmundo, Wasp, Wat, Wens, Wubik. From the urban artists onwards the arches will not remain empty. The works will become itinerant and in their place other creative paths will be presented: Artists from the Albertina Academy, designers and graphic designers as the protagonists of Graphic Days or Design Weeks. Till April 4th there is an open call for the 2022 edition. 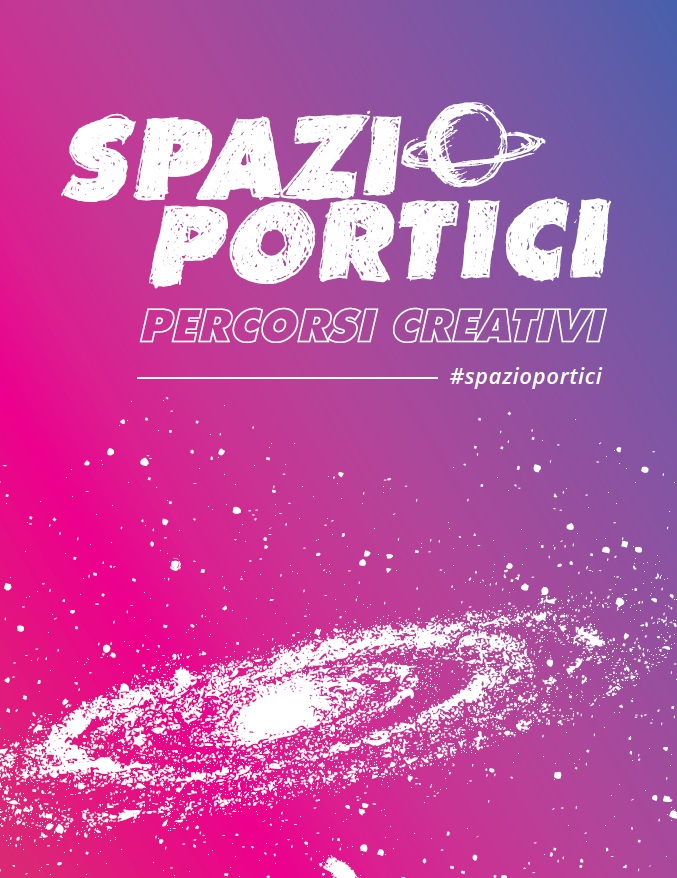 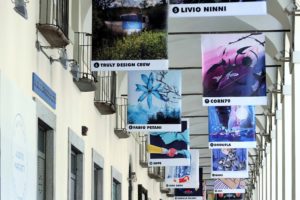 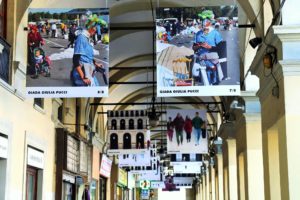 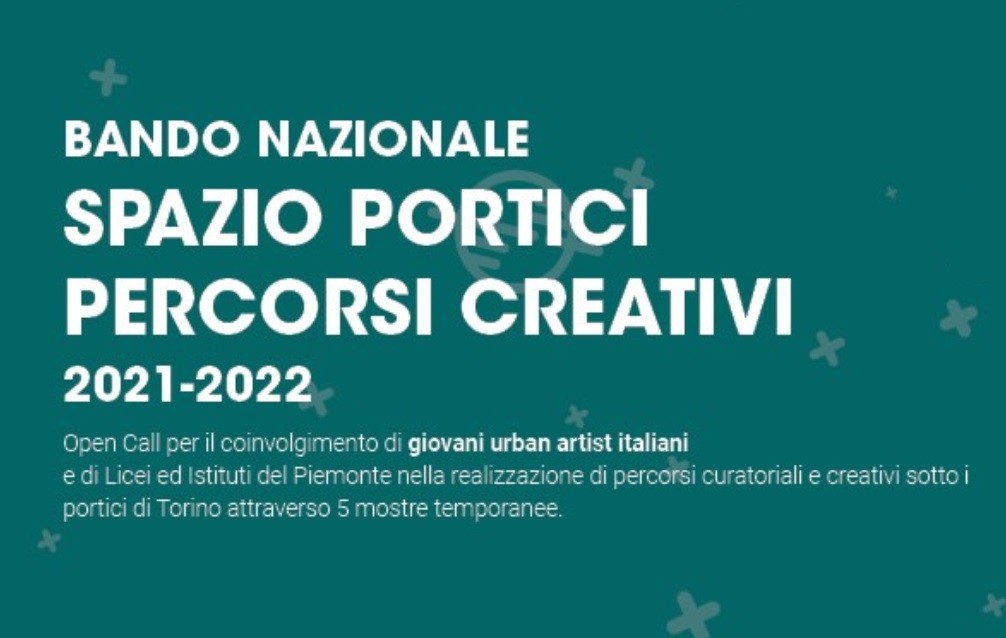 Open Call for the involvement of young Italian urban artists and Piedmont high schools and institutes in the creation of curatorial and creative itineraries under the arcades of Turin through 5 temporary exhibitions The call is part of the “Spazio Portici – Creative Paths” project of the Contrada Torino Onlus Foundation according to a method already tested on two occasions: in via Po in 2020 and in Via Nizza in 2021. There are two sections within the call for the 2022 edition. Professional section: dedicated to professional artists and / or artistic curators. Educational section: dedicated to classes belonging to high schools / institutes of Piedmont. The deadline for the call is 4th April 2022. 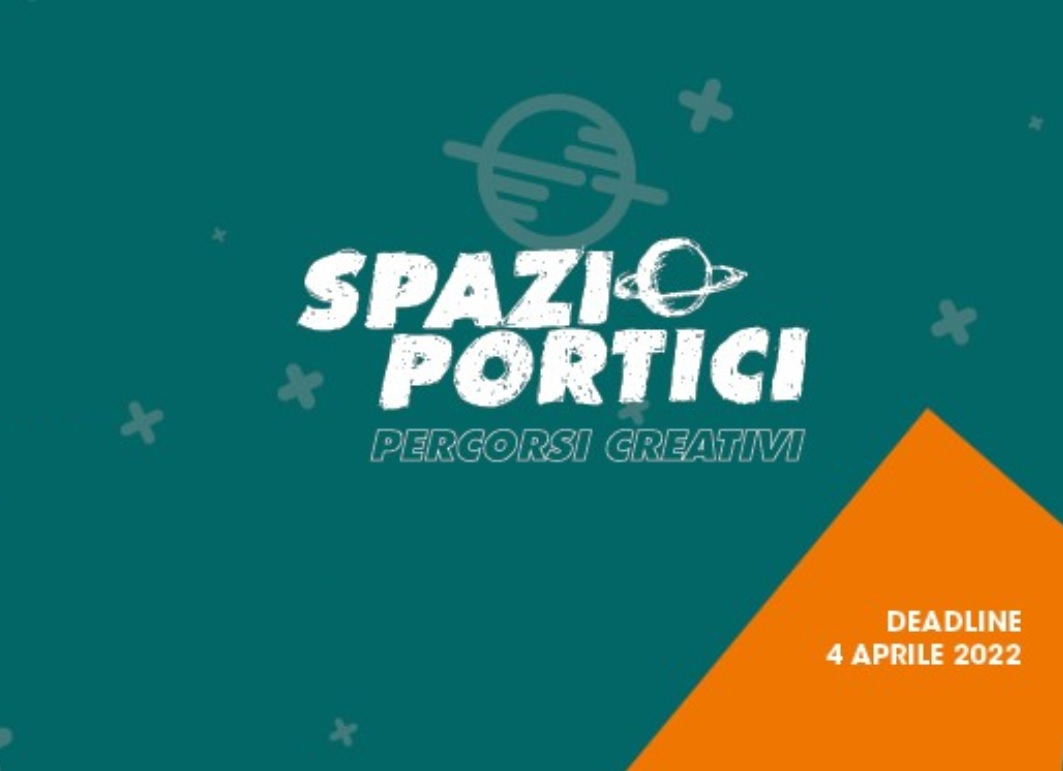