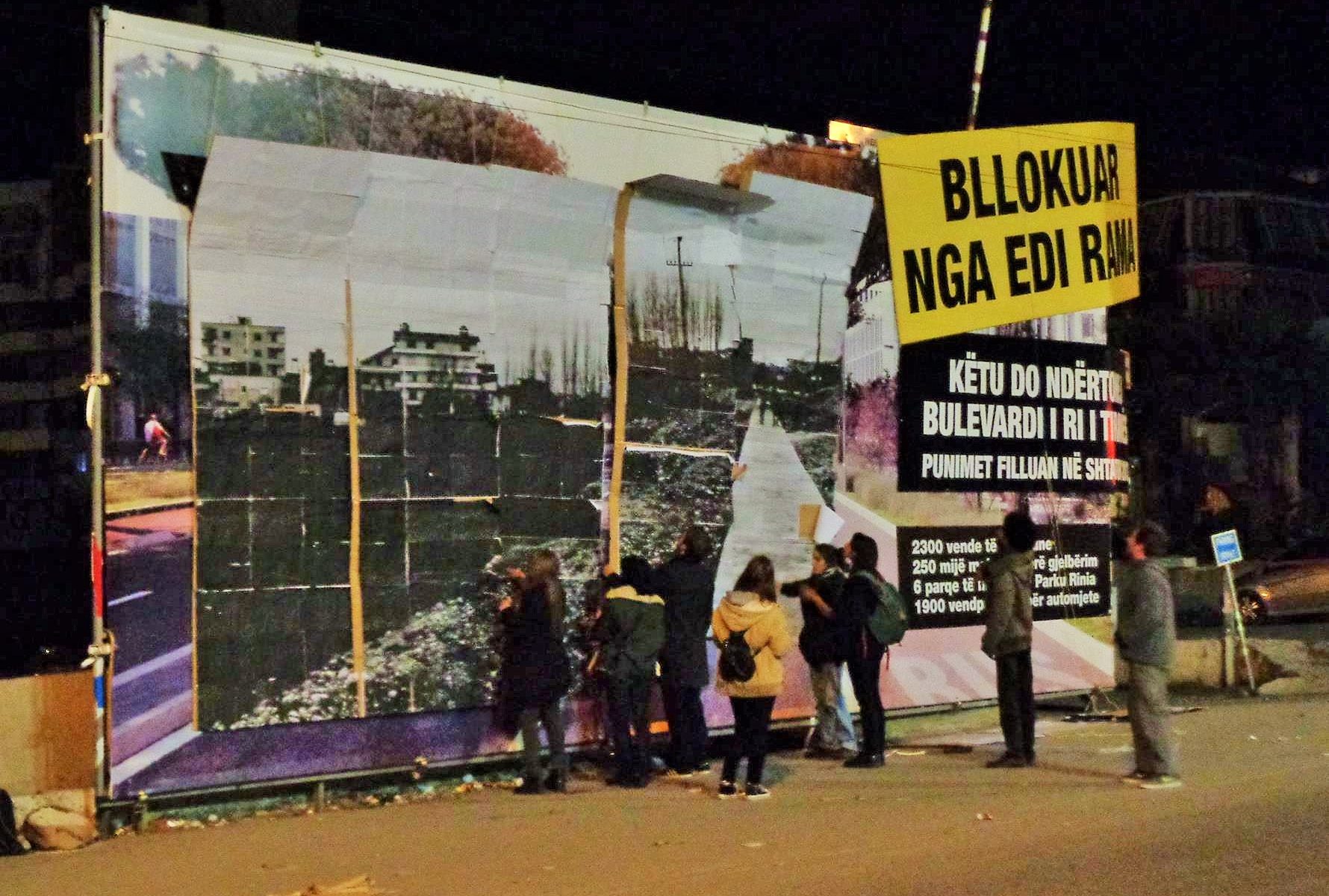 There is a lot going on at the moment in Albania and overall in the capital Tirana. You see construction all over the country, buildings and new infrastructure just pop up everywhere from the ground, you just can see the development during the process. The country receives a lot of input, support and money from the EU especially for restoring and renovating the UNESCO heritages, for new roads and new facilities, as well tourism-oriented projects, to get the economy running. They are building everywhere you look. And they are not just behaving like there would be some construction, it really gets build and this happens fast.

If you get a boost like this with such high aims and agendas in such short time, it is obvious that there will be mistakes, misunderstandings and wrong planning. We still live in capitalism and the profit is the main factor, social-cultural factors and the human beings are mostly left behind or are only secondary concerns. But we live as well in an information society and you can illuminate, inform and explain to give impulses and motivate people to think. Often the problem of common (non)-participation is common (non)-knowledge.

Alexander Schellow, professor at the Departement Cinéma d’animation at the University of Brussels, is consecrating himself since a while to these problems and phenomenon with very creative and practical methods. The students like it and understand very easily by doing. Schellow organized a cooperation project with students from Albania and Belgium. Very interesting was their combined innovative work in the capital Tirana. Meanwhile there developed not only a dynamic and enthusiastic group of student, but as well these group produced already a lot of clever and critical results in form of projects, exhibitions and presentations. The focus of this cross-national undertaking is based on the subject architecture and includes a lot of collective created ventures which took part at the university and public locations.

How can you do effective development planning and which factors are the most important ones? How can you plan and construct the city in an adequate way and include all the necessary socio-cultural aspects? This country and the city is a very interesting study object, because they are building with such fast speed. In these terms you can observe in a very present way, what happens at the moment. As well it is a place where you can take part in shaping the common opinion and open discussions, you can start helping even to create and enforce such discussions and open a platform for the people to think about what is happening with their home place. 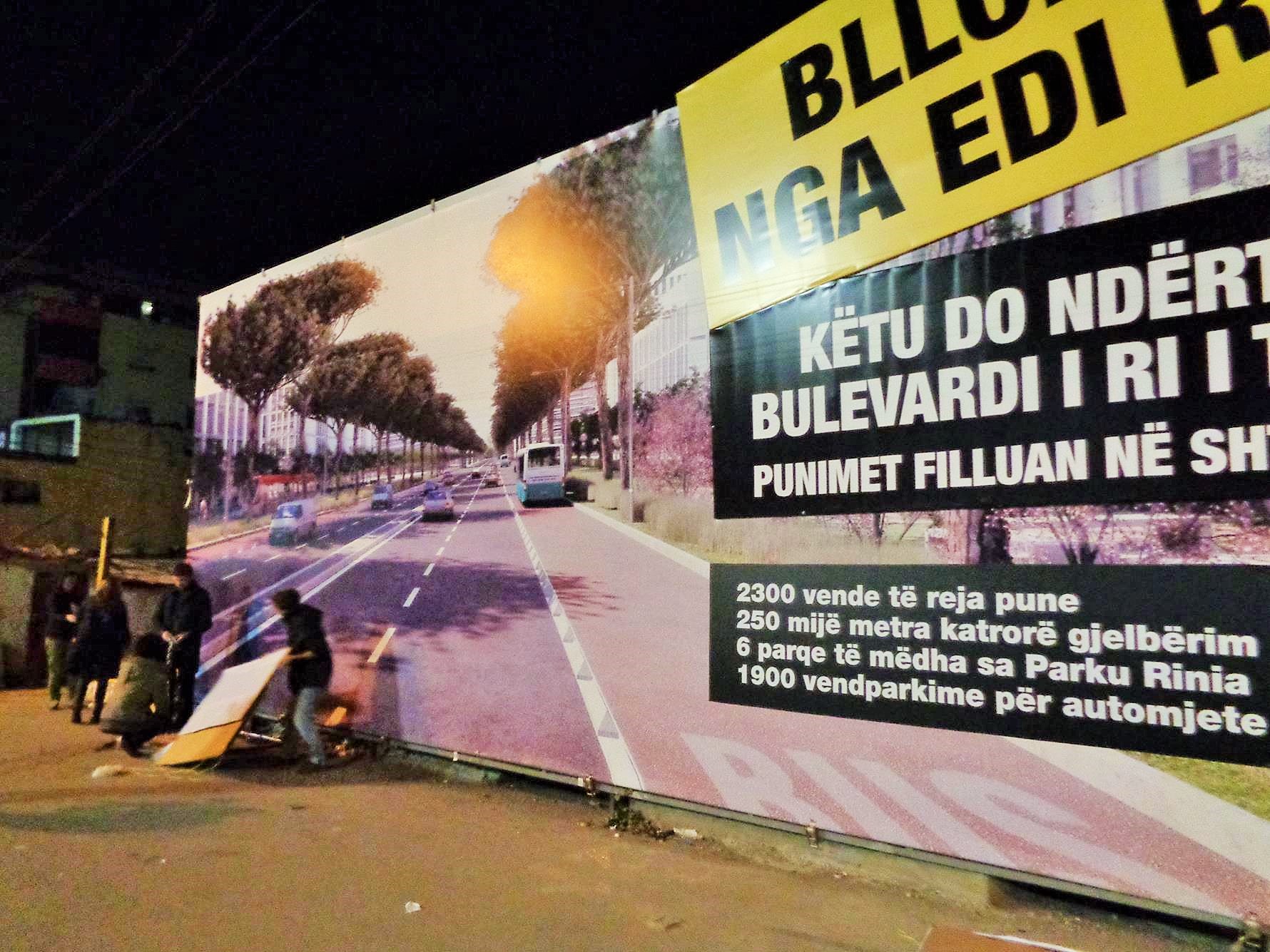 Alexander Schellow tells us about the project and the nice story about the amusing and as well deep-critical posting. (Wonderful that there are people who have the ideas and the courage to do such things):

For Schellow it is as well important to show the students how interdisciplinary the faculties are connected with each other and actually depending on each other, what means they should work together. If you do wrong construction, then this will have consequences in the future. It´s not just about to build something and let it look nice and beautiful. It has to be as well adequate in sense of meaning, effectiveness and the needs. You have to include in the planning the social-cultural aspects, otherwise you just have an enthusiastic planning, pushed by budget syringes, but this won´t function for long in a useful way. In the end there should live people, they should work there and be satisfied with the plan. During a creative and smart cloak-and-dagger operation besides the study courses at the university there has been a demonstration of such finger pointing on these problems. And this way is actually just a good understandable and sobering way to get attention. There was no vandalism, no damage, nobody got hurt or anything like this. There was just a huge advertisement poster covered with another huge poster. And if you look closer, if there was an act of vandalism then indeed the first poster was the vandalizing, manipulating and misguiding object. 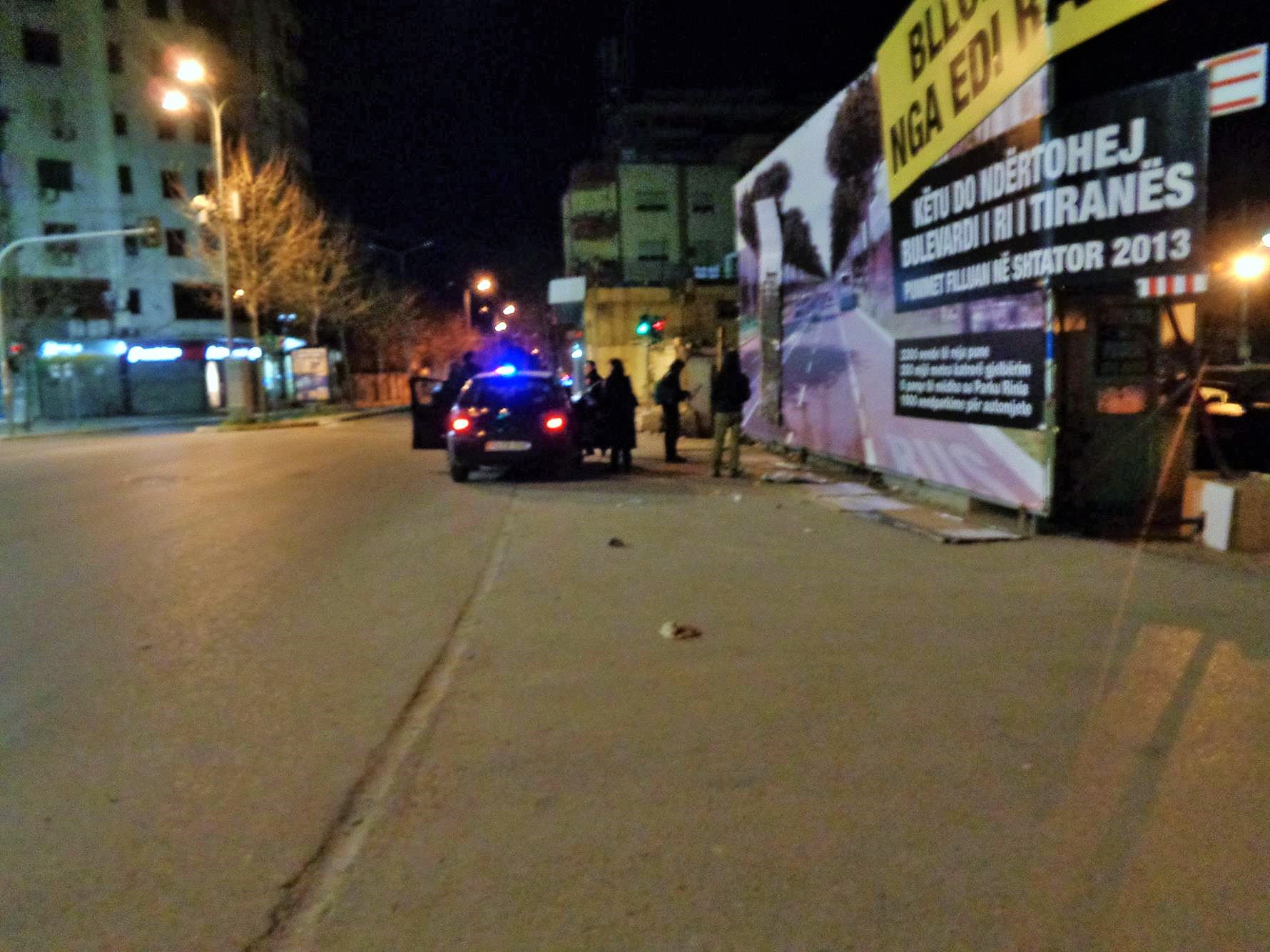 They want to continue building a new part of the city highway. The car drivers shall see the nice picture on the poster how it could look like in the end. The huge sign shows it. Very nice. But what´s behind the sign? Because this you cannot see anymore, it´s so huge. It´s something between no-man’s-land, settling area and nearly a slum. But people are living there and in the middle there is just this strange no-mans-land. The Creative-Pirates took some photographs from the area behind, printed them all out and put them together to a huge picture. They put them on the sign to show what´s actually behind the scene. How it would look without the sign and what is going to get fogged with this covering. The area is a place where a lot of people arrive who come to Tirana from the country, it is kind of a melting pot and as well a boundary between the new and old of the city. Just to build a highway through is not exactly the first step to solve here. The picture shall show this the passing drivers and make them think about what´s going on in their capital and how a lot of actual ways of building are happening.

After some time there came as well some security men and the message poster didn´t hang for a long time. But this was just a pirate action; the group hosted and organized a lot of different events and arrangements during the time of the study project. Most of it in public exhibitions, presentation and performance, a lot them were staged at Epoka University. 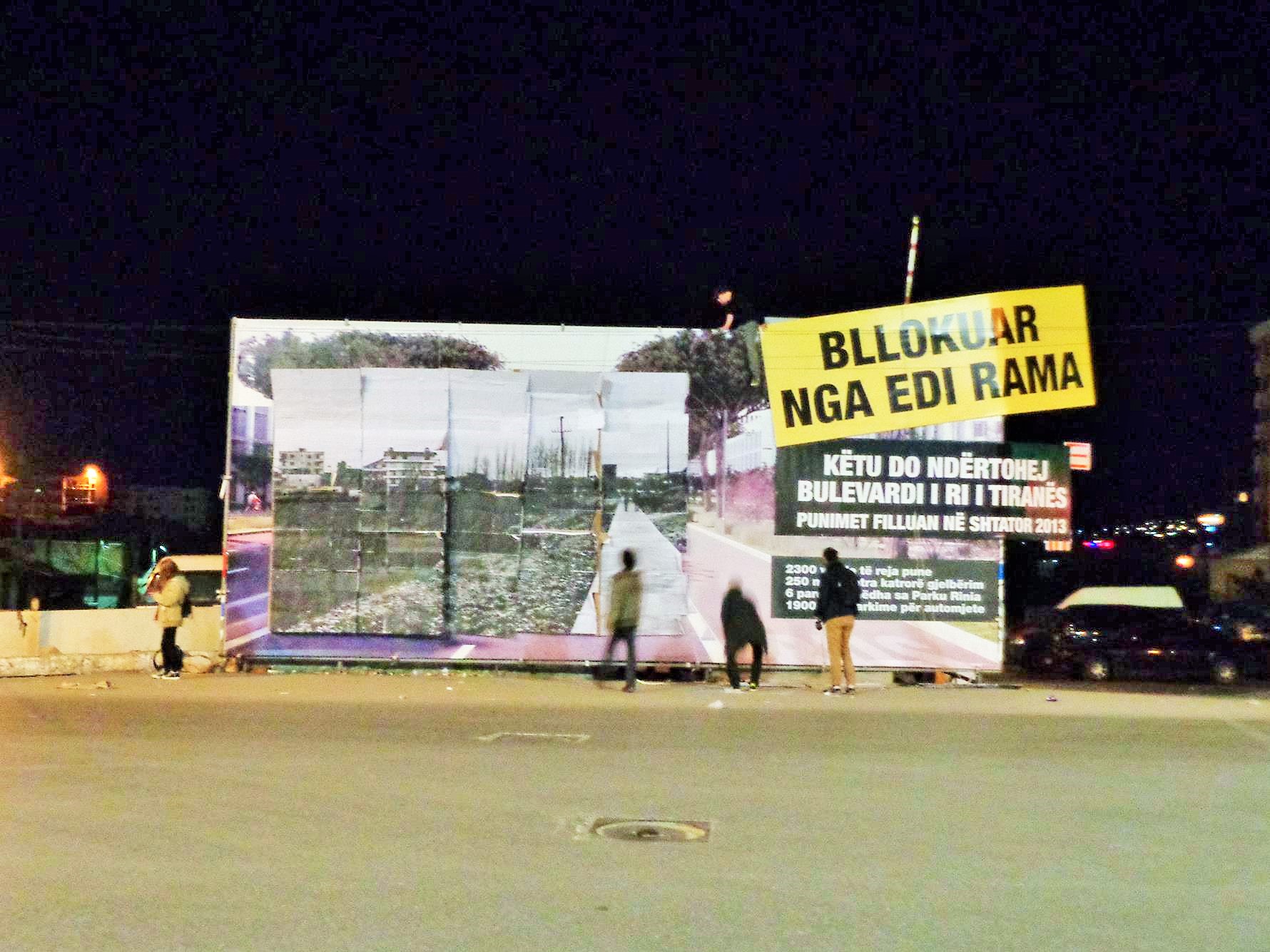 Interview with Alexander Schellow and students of the group at Club FM: https://www.youtube.com/watch?v=hhByI3IffaM