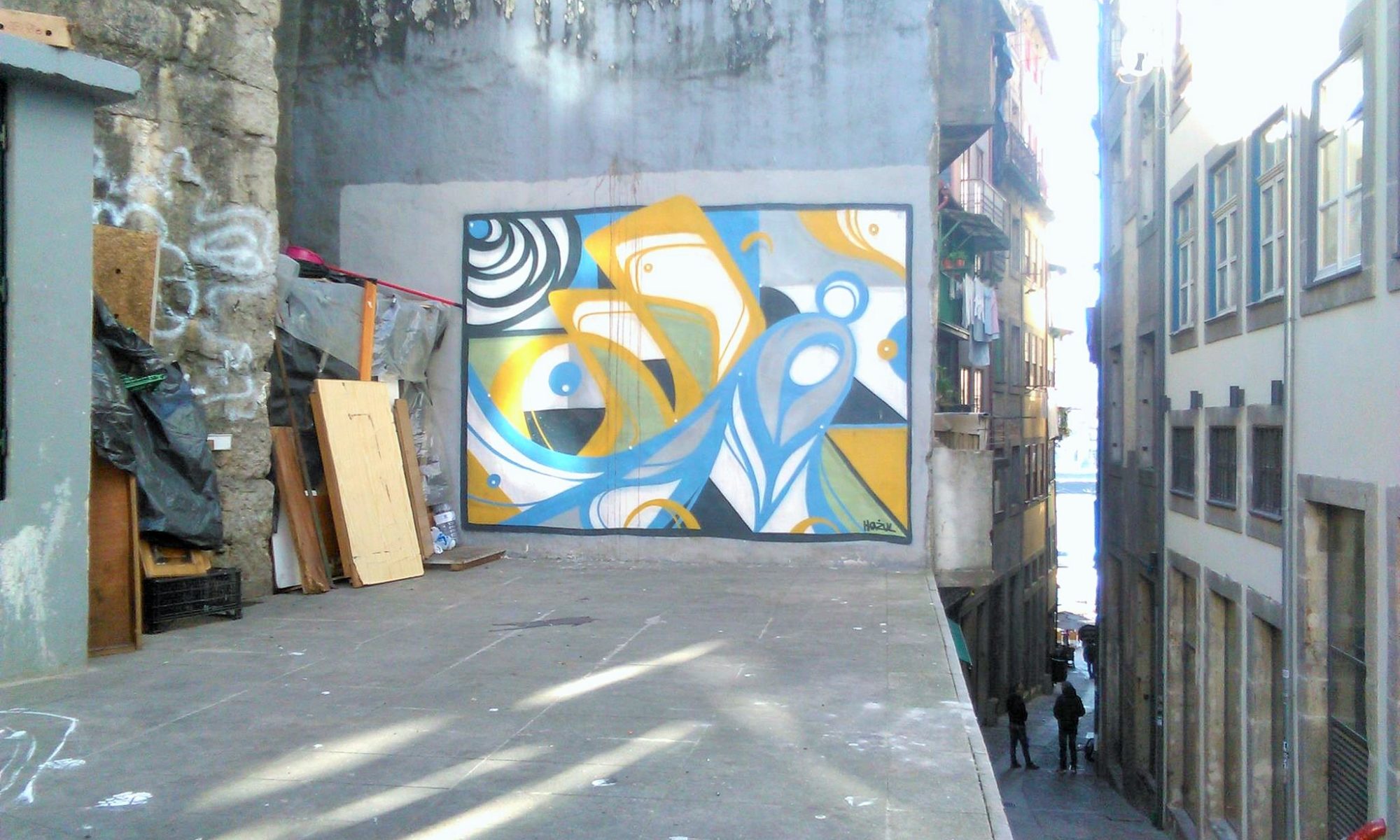 Of course, a city with so much quality also needs a street art scene of the extra class. That’s what Porto can do. The decaying charm of some buildings contributes very well to highlighting the art even more. Many local artists, painters and graphic artists are at work here. But international artists also have spots in the heart of Porto. In addition to the azulejos, which are already great art in themselves, the open-air galleries expand and open up the cultural horizon of the city. Both for tourists and locals. 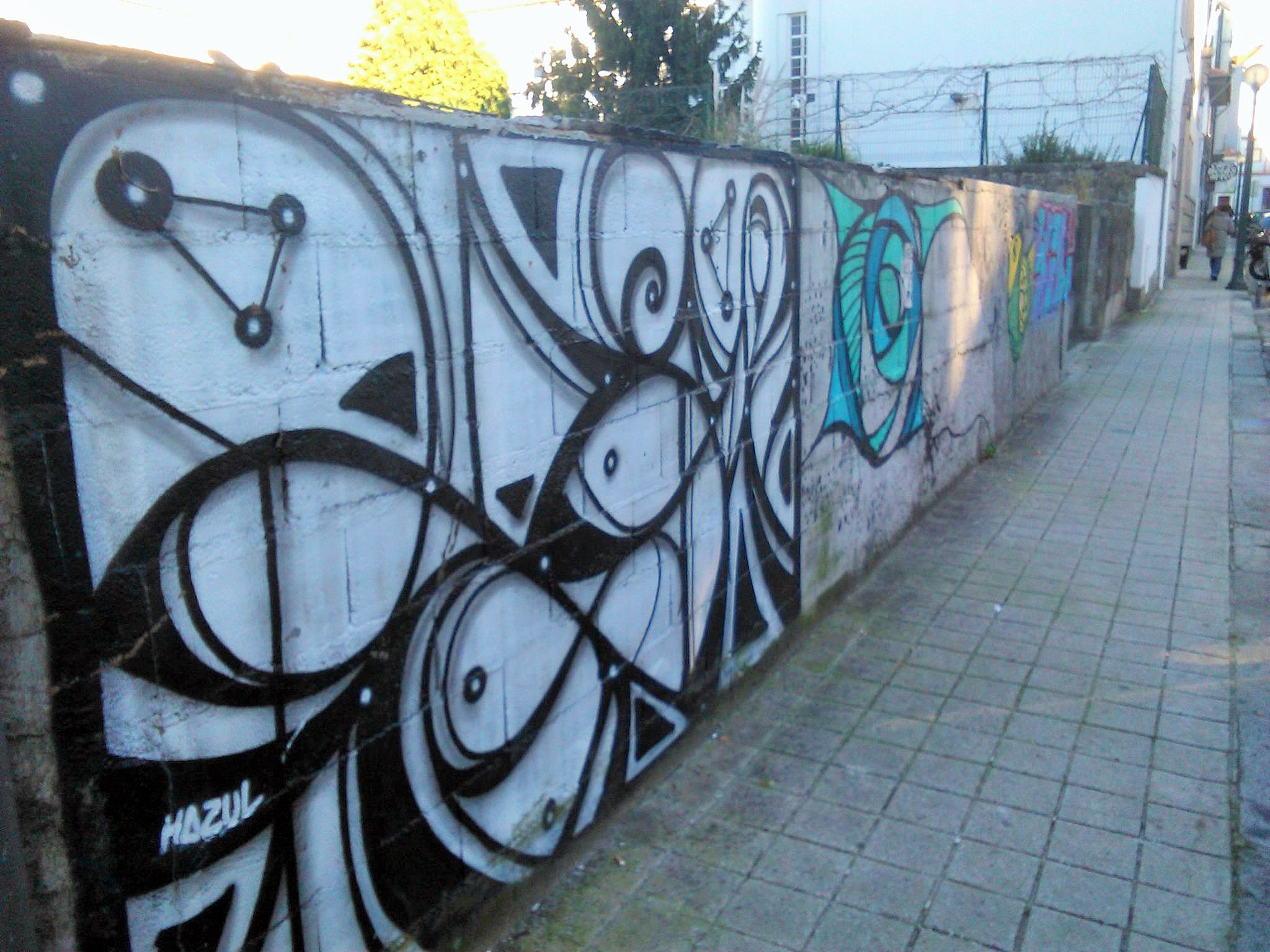 The strongest presence in the city are the local painters “HAZUL” and “COSTAH”. ” HAZUL” (also “HAZUL LUZAH”) plays a lot with clear, soft, round shapes that also flow into each other. His pictures are colorful and very eye-catching. ” HAZUL” began with graffiti in 1997 and developed its own style over the years. Since 2008 he has been painting under the pseudonym “HAZUL. ” His pictures often have symbolic and dreamy dimensions. He creates relationships between objects and subjects and between organic and geometric figures. The influences are a mixture of primitive art, ancient civilizations, or people from a tribe, expressed in a timeless and universal language. Often, figures are reminiscent of saints, such as the Virgin Mary from Christian mythology. The pictures of “HAZUL” have their own character and are definitely worth seeing. They’re spread all over the city. 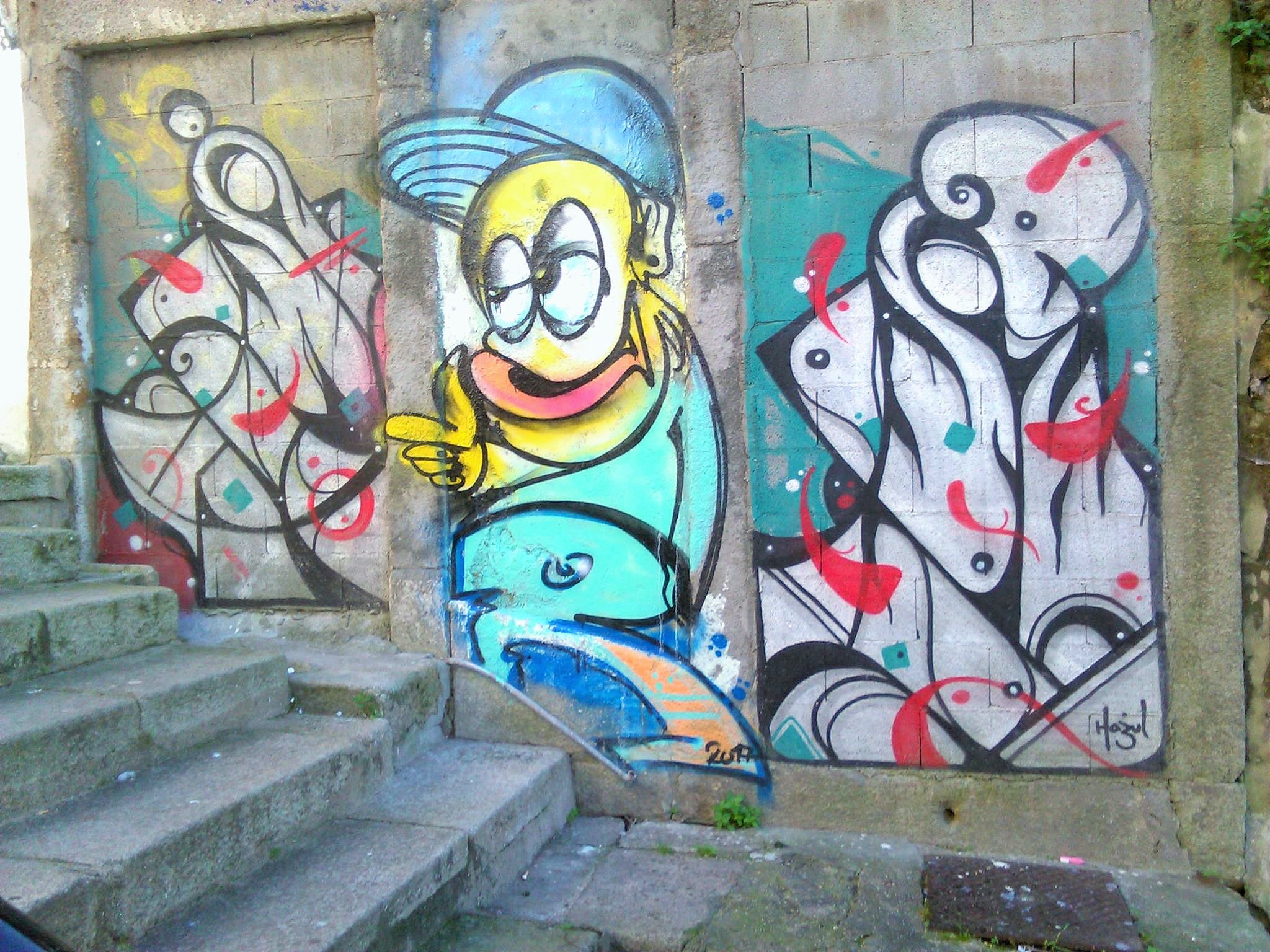 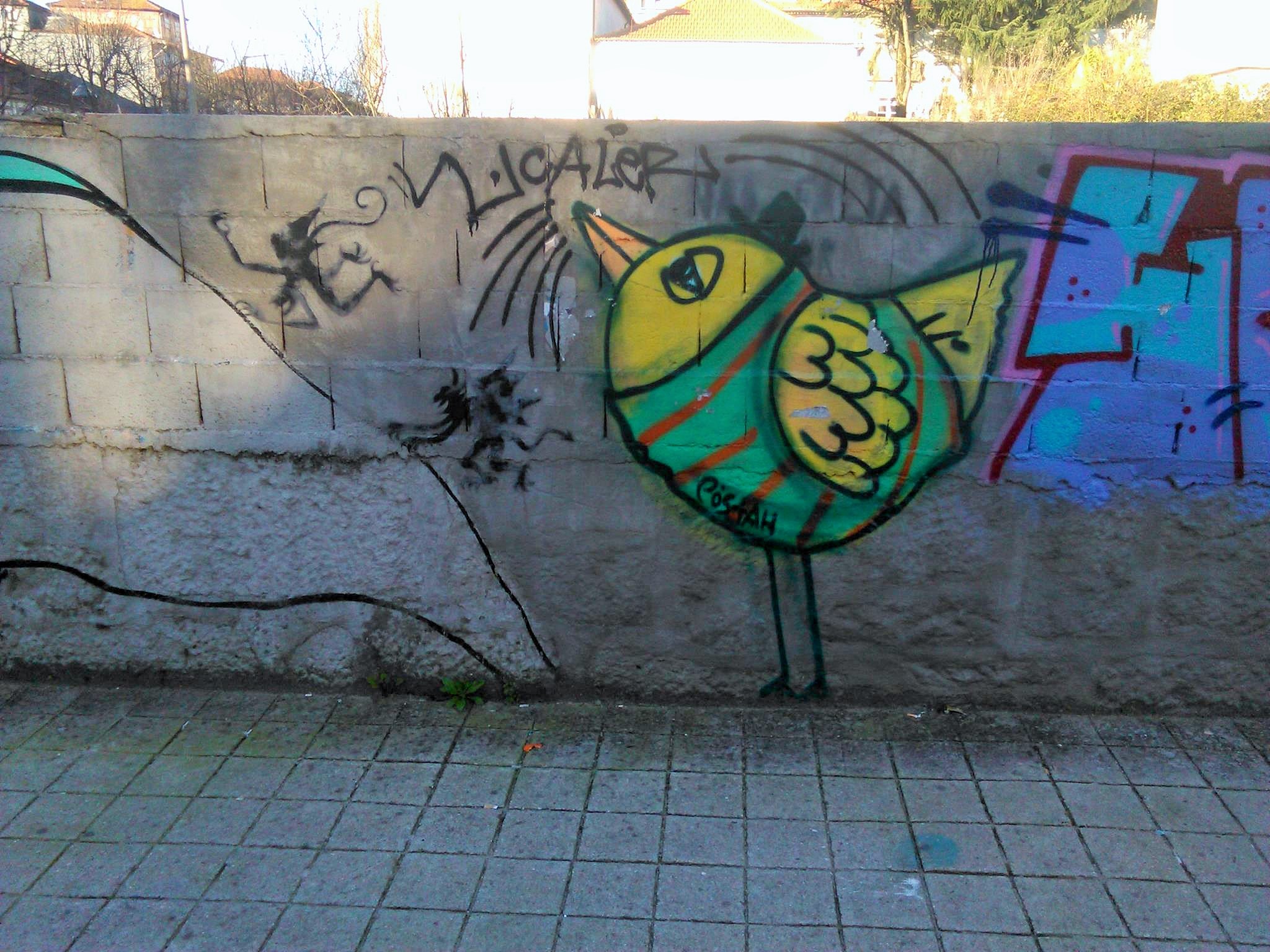 “COSTAH” is also a style icon and extremely present in his hometown. The tattoo artist, draughtsman and street artist has many possibilities to express his art. He is at home on walls, paper and human skin. His figures from the world of humans and animals always seem cheerful, colourful and friendly and exude a good mood. “COSTAH” is quite variable in its skills. I particularly like his works. They are refreshing and witty. Similar to “HAZUL”, “COSTAH” also began graffiti in 1997, at that time still characterized by hip-hop and lettering, he also developed his own style and is thus easily recognizable in the cityscape. Since 2007, he has also tattooed motifs that he has designed himself. 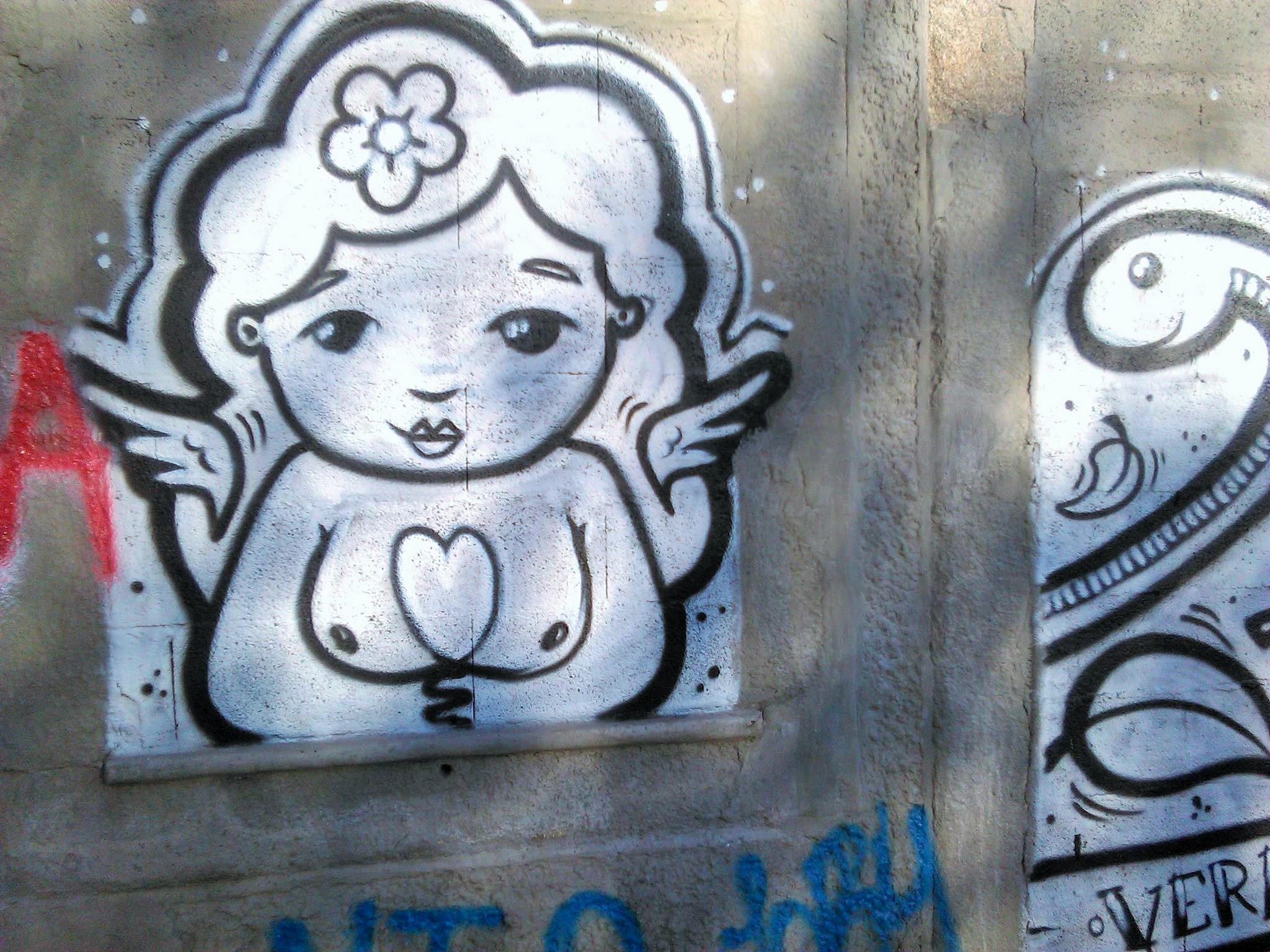 Since 2012, the “CHEI KREW” has also been in trouble in Portugal. The Street Art Duo paints funny dogs in different contexts and colours. The dogs usually grin friendly from some corner. They are designed in a simple way and still have a good effect on the cityscape. Especially at dilapidated corners, the dogs enhance this corner once again and spread their unique flair. The artist collective “CHEI KREW” is doing a good job to make Porto even more attractive.

Another artist that stands out is “GODMESS“. The artist from Porto holds all his figures in the color red. Whether sitting men, jumping dogs or even salto-beating figures. “GODMESS” likes the memory dimension of urban objects. By painting they get their own character. It shows the (further) development of the city and thus walls serve as a memory for past days and experiences in the form of graffiti or street art. He does street art for himself, but it is also seen by others. Respect is an important factor. Every artist knows the other artists in the city and they respect each other’s works. This leads to less hatred on the streets, but to a shared dynamic development of the scene. “GODMESS” has also been active in the scene for a very long time. 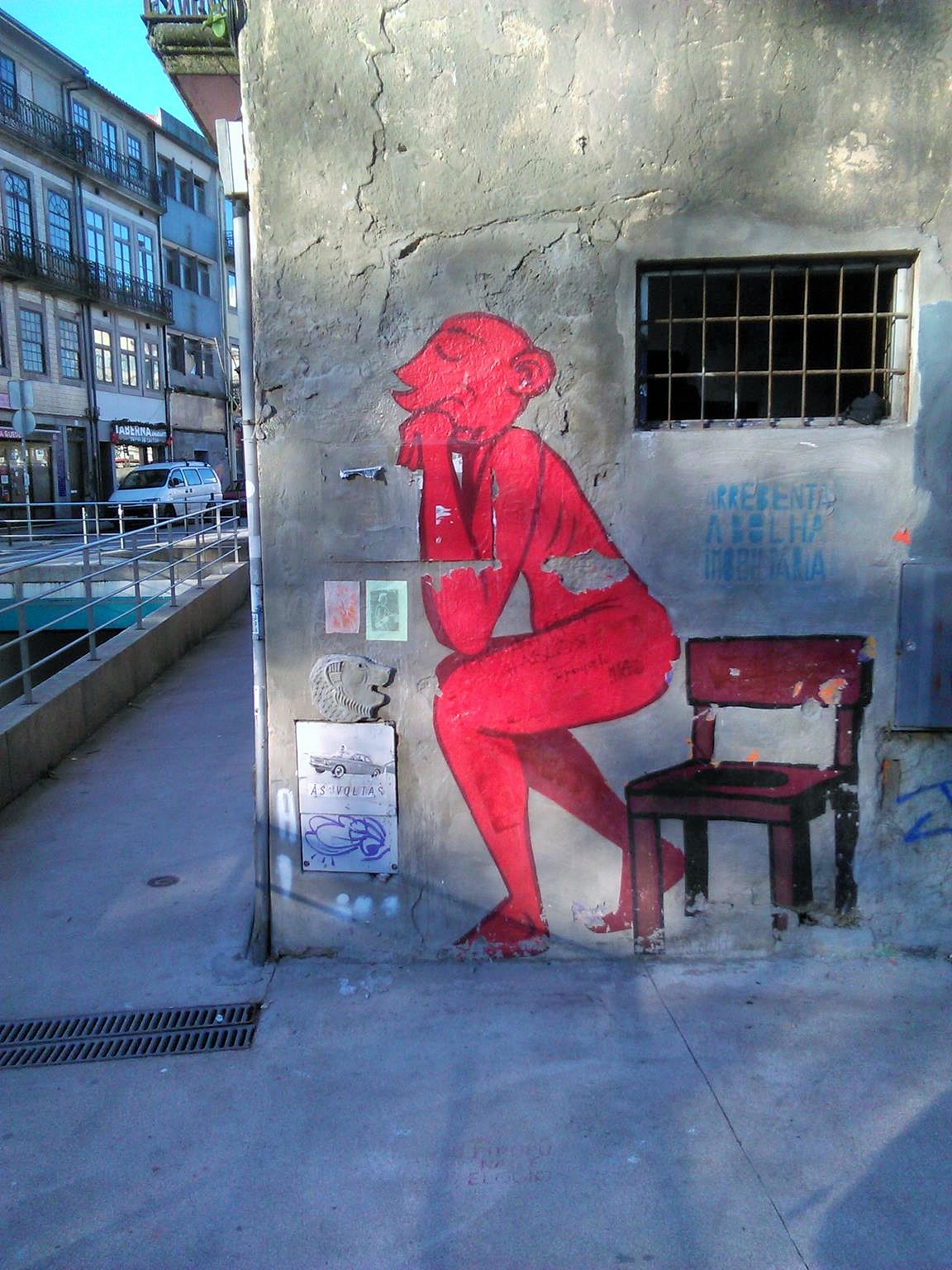 “OKER” (also “OKERLAND”) is the next painter in the group. He also paints very colorful and uses faces and animal figures in comic style. His colorful head is rich in detail and easy to look at. ” OKER” paints like most Portuguese artists in the major cities of Portugal. He also has a really good spot in Lisbon. There he designed a mural with animal figures and faces in blue, white, orange and black. Absolutely worth seeing. The artist has several spots in the city. He paints a lot of character. Including dogs with sunglasses and thick cassette recorders from the 90s. He likes to put a lot of details into pictures, which makes the pictures look very impressive. “OKER” is a good man. 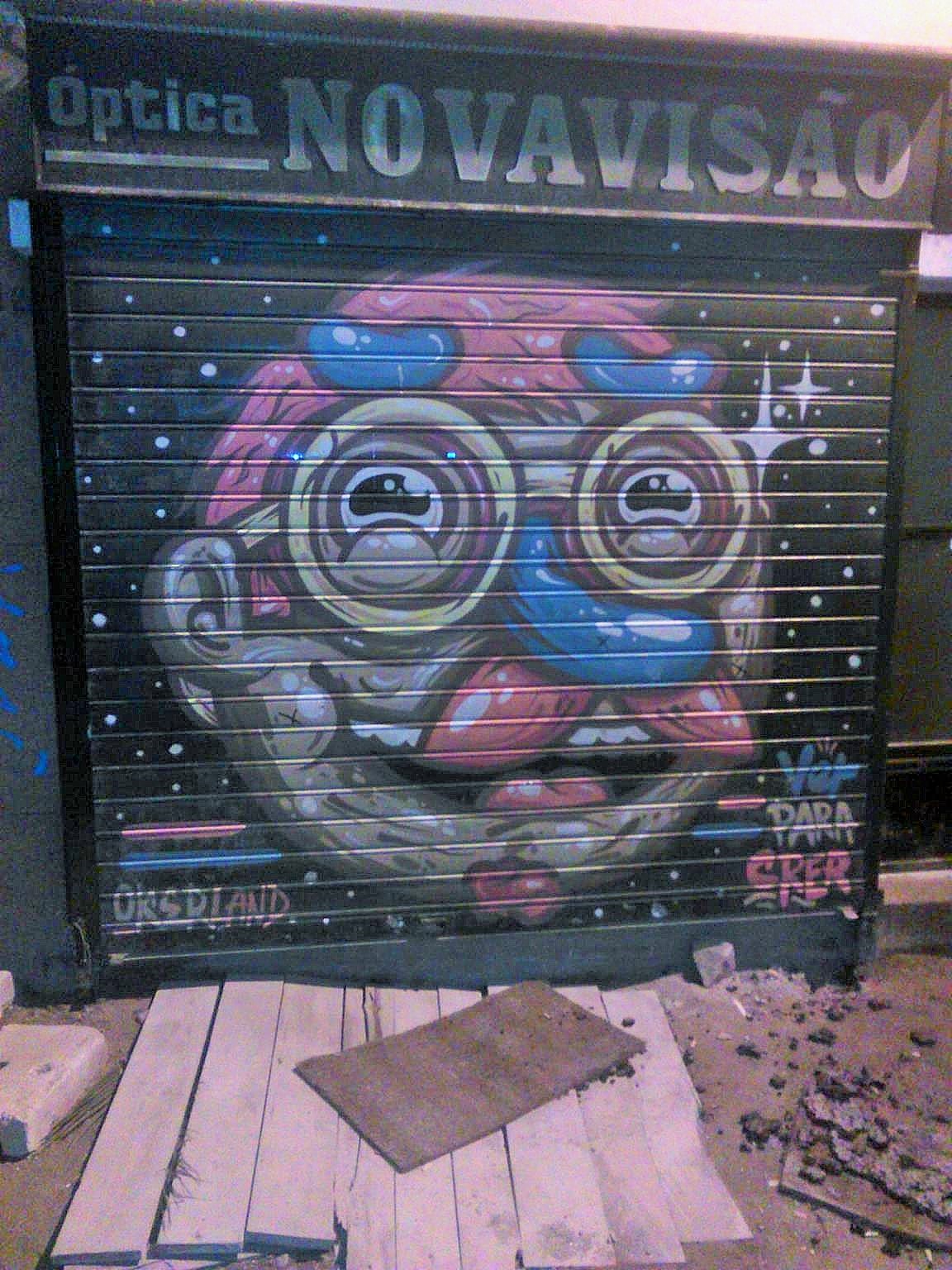 When it comes to realistic portraits, there is no way around “FREDERICO DRAW” (Porto, Portugal). The man is a real expert. The portrait of the old man at the foot of the “Ponte Dom Luis I” is an absolute hit and eye-catcher. Personally, I consider this portrait to be one of my favourite pictures in Porto. The decaying charm of the building, including the portrait, makes art appear as if it had been at home there for hundreds of years. There, art and architecture merge perfectly. “FREDERICO DRAW” uses paint cans as if they were pens. Super detailed and fascinating works. He also has a master’s degree in architecture and thus creates his own space. That’s great. The portraits, figures and people are often in black and white tones and the background is very colorful. Very strong pictures. “FREDERICO DRAW” is active worldwide and embellishes some cities of the world with its magnificent art. She has regularly exhibited her works since 1994. First in Portugal, then all over the world (San Francisco, London, Paris, etc. ). 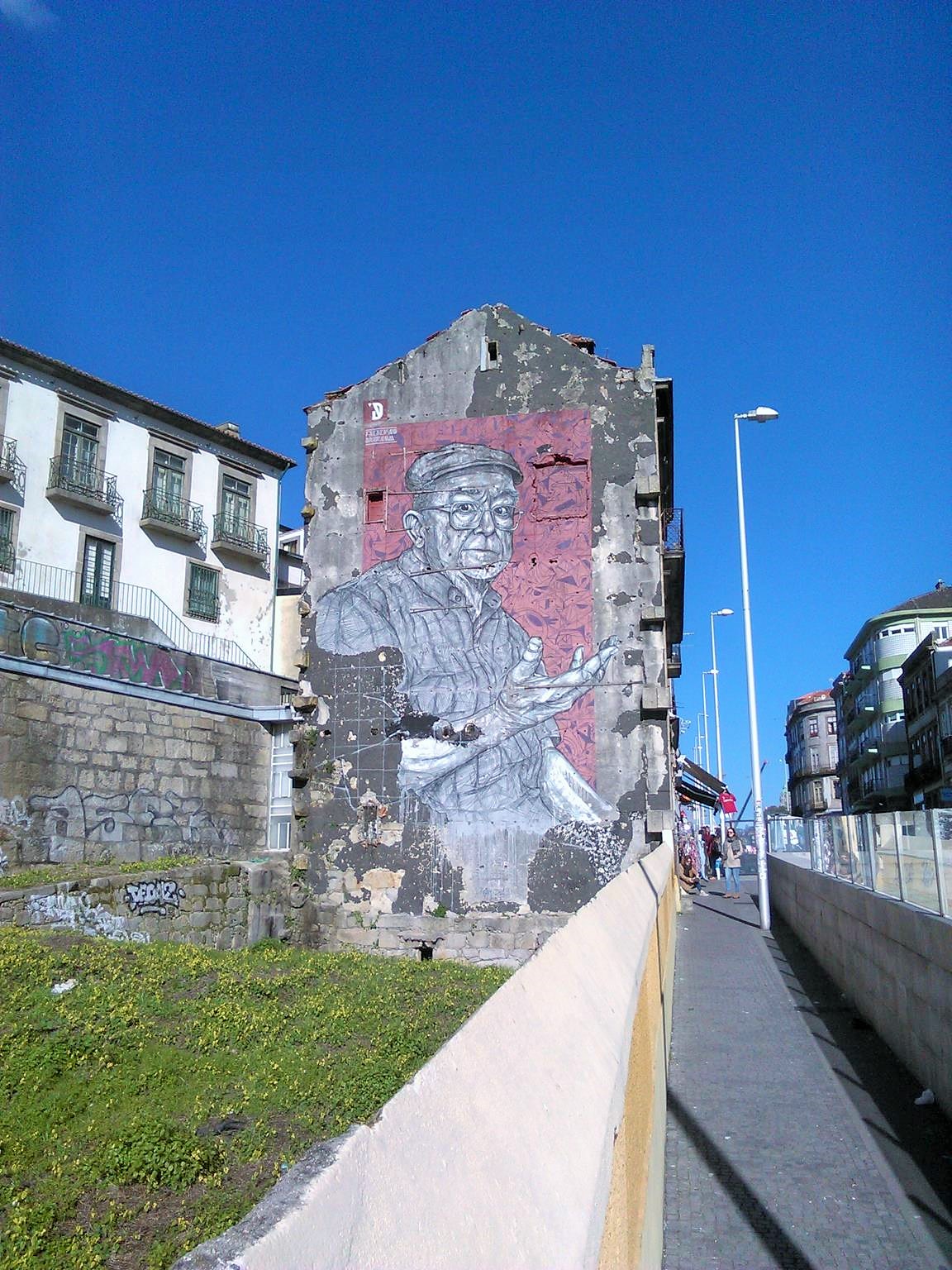 “JOANA VASCONCELOS” (Lisbon, Portugal) is a contemporary artist. She’s not a classic graffiti artist. Her works prefer other techniques and art forms. She puts a lot of emphasis on installations, sculptures, videos and photography. In addition to modern conceptual art, she relies heavily on manual work such as sewing and crocheting and combines these techniques with each other. Large formats are her passion and that is something to be proud of. “JOANA VASCONCELOS” designed a complete wall in Porto in cooperation with a burger-shop chain (Steak’n Shake Portugal). The picture consists of 8000 hand-painted tiles, is very elaborate and therefore also very memorable. Fantastic work in the heart of Porto. 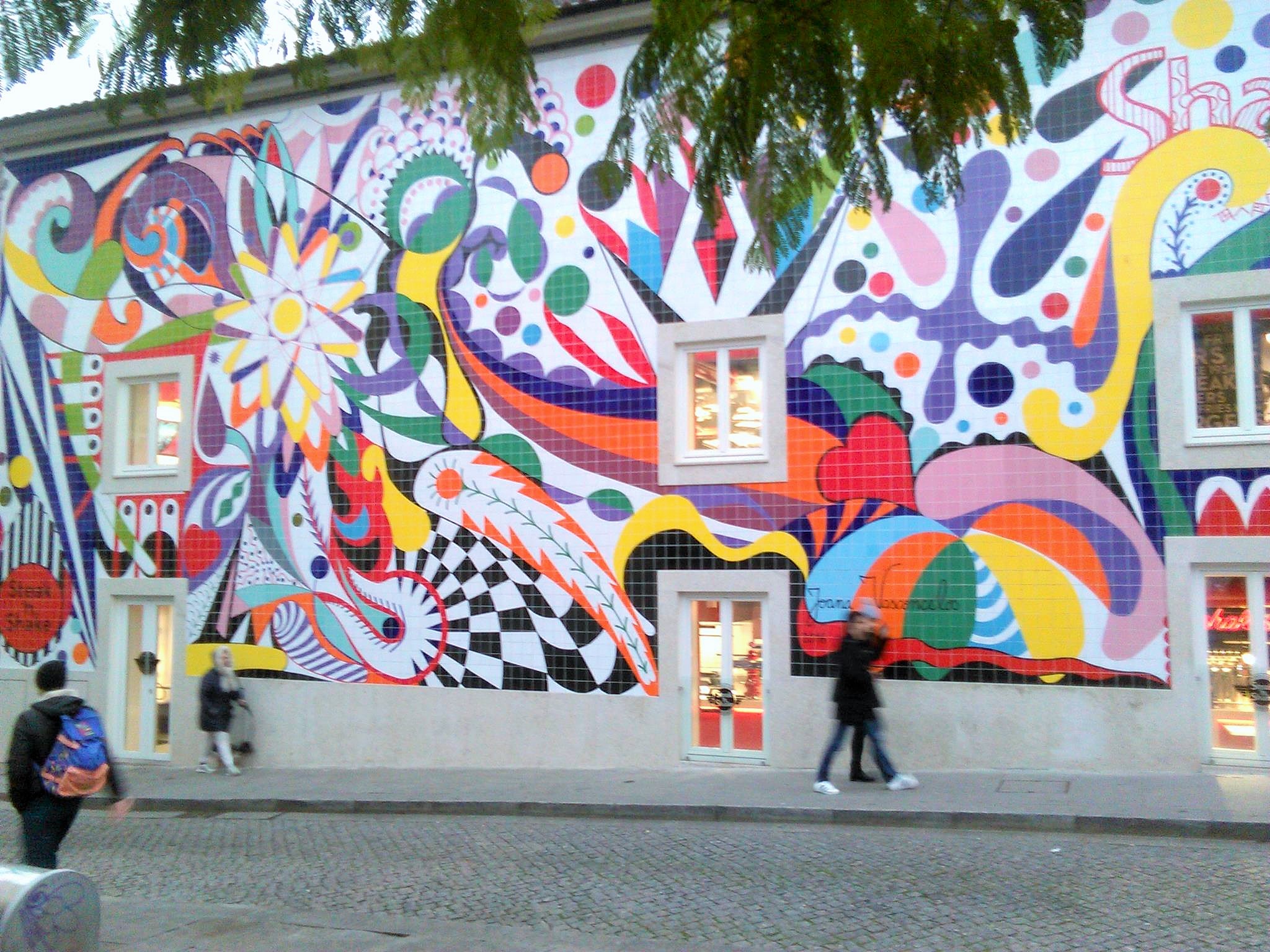 In terms of stencil art, the French artist “GUATE MAO” (Montpellier, France) definitely offers really hot goods. Art often has elements of the African continent in its features. Be it portraits of African nomads, tribesmen or children. Excellent artworks in the stencil sector. The picture in Porto looks like a Moorish conqueror of bygone days. “GUATE MAO” paints a lot internationally in different cities and metropolises (e. g. Porto, Istanbul, Barcelona). His stencils are very memorable and easy to assign due to the style. In terms of stencil an absolute killer. Exactly my taste. 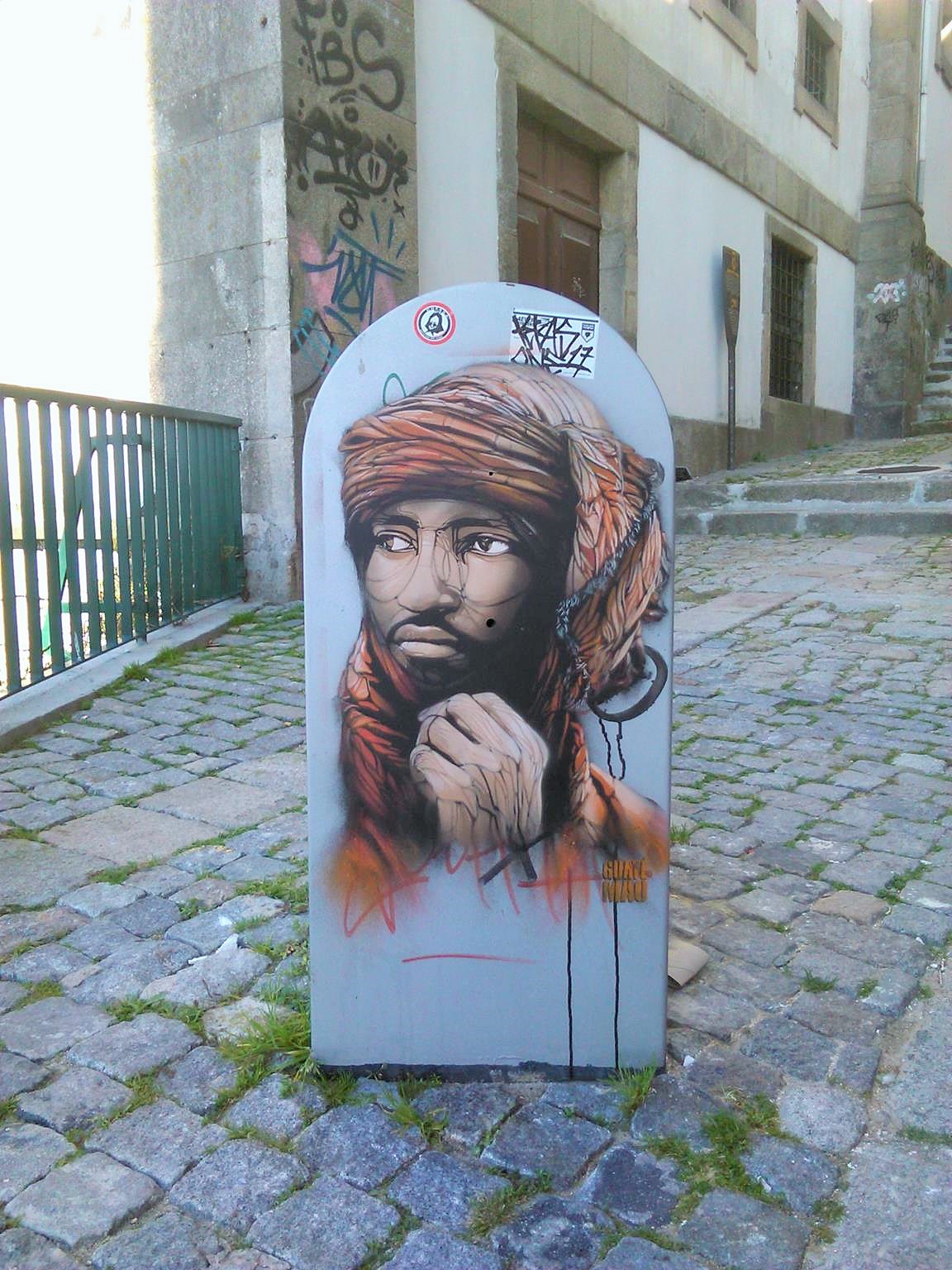 “MOTS” is an artist couple who does fantastic murals worldwide. Diogo is from Porto, Jagoda from Poland. Together they create super nice artworks as MOTS. In Porto I noticed a power box of them showing their talent. They attach great importance to abstract reconstructions of forms. “MOTS” perfectly complements the cityscape with their art. (Check out the interview with MOTS here on Vagabundler). 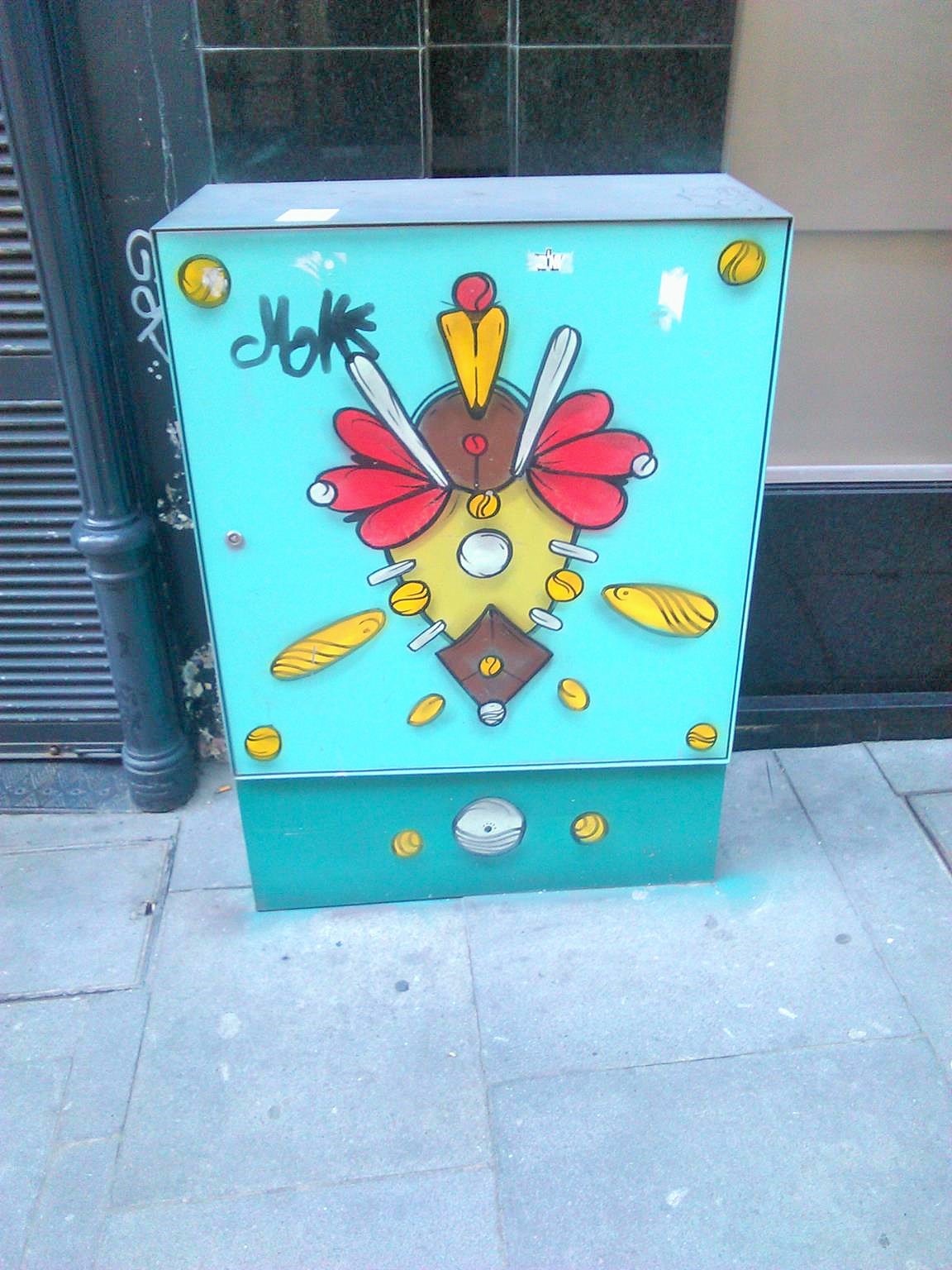 Another foreign artist who made some paintings in the city is PAWEL DASIOR from Gdanks in Poland. He is part of the collective who runs Zajawa Tattoo which is represented with stores in four Polish cities. DASIOR is mainly focused in the area of body art but also does paintings on canvas sometimes or like here in Porto colorful street art on urban walls. His motifs are often animals and fruits constructed out of puzzle-like structures and forms. In Porto he painted the Galo de Barcelos in his very own style. 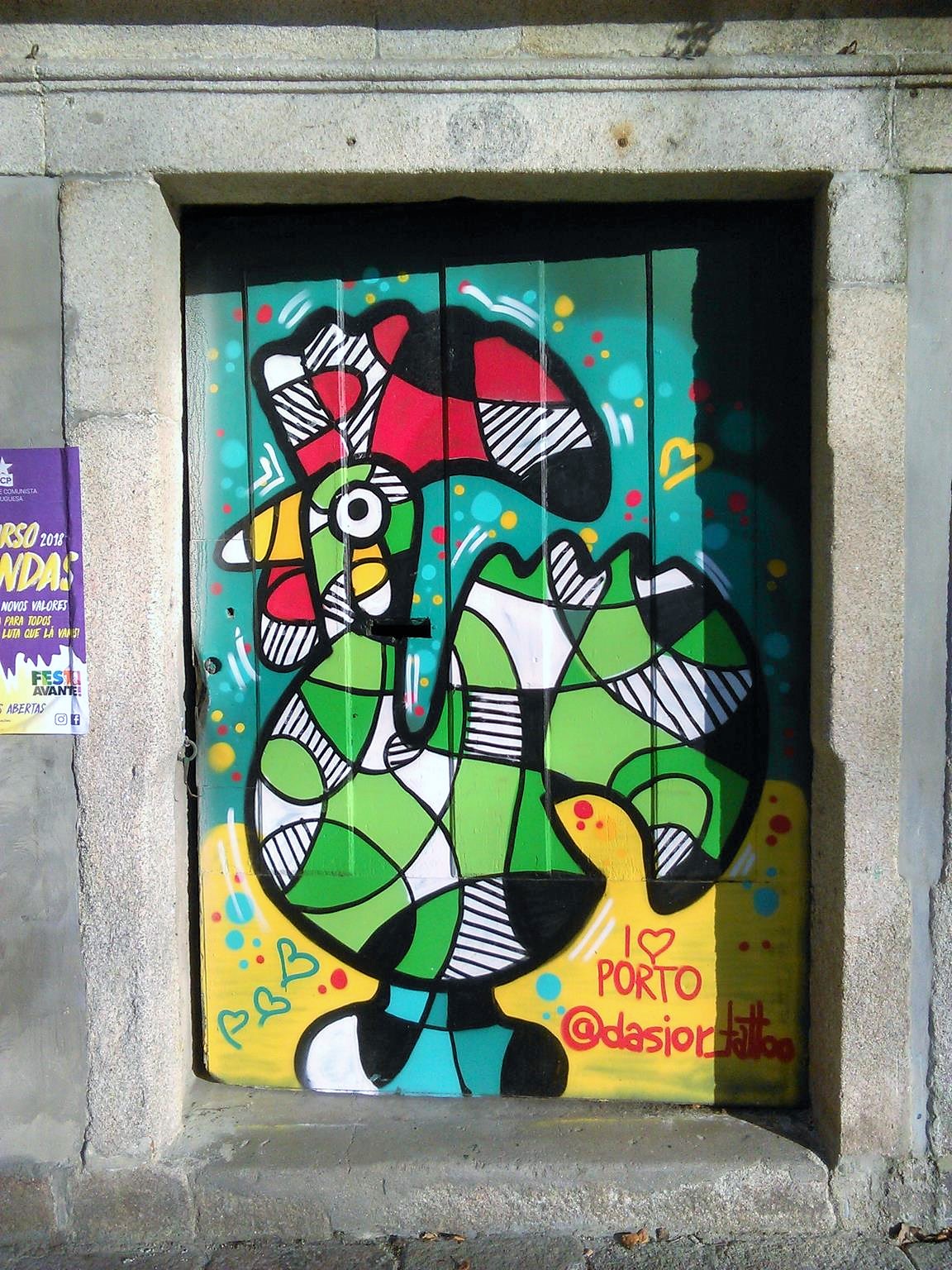 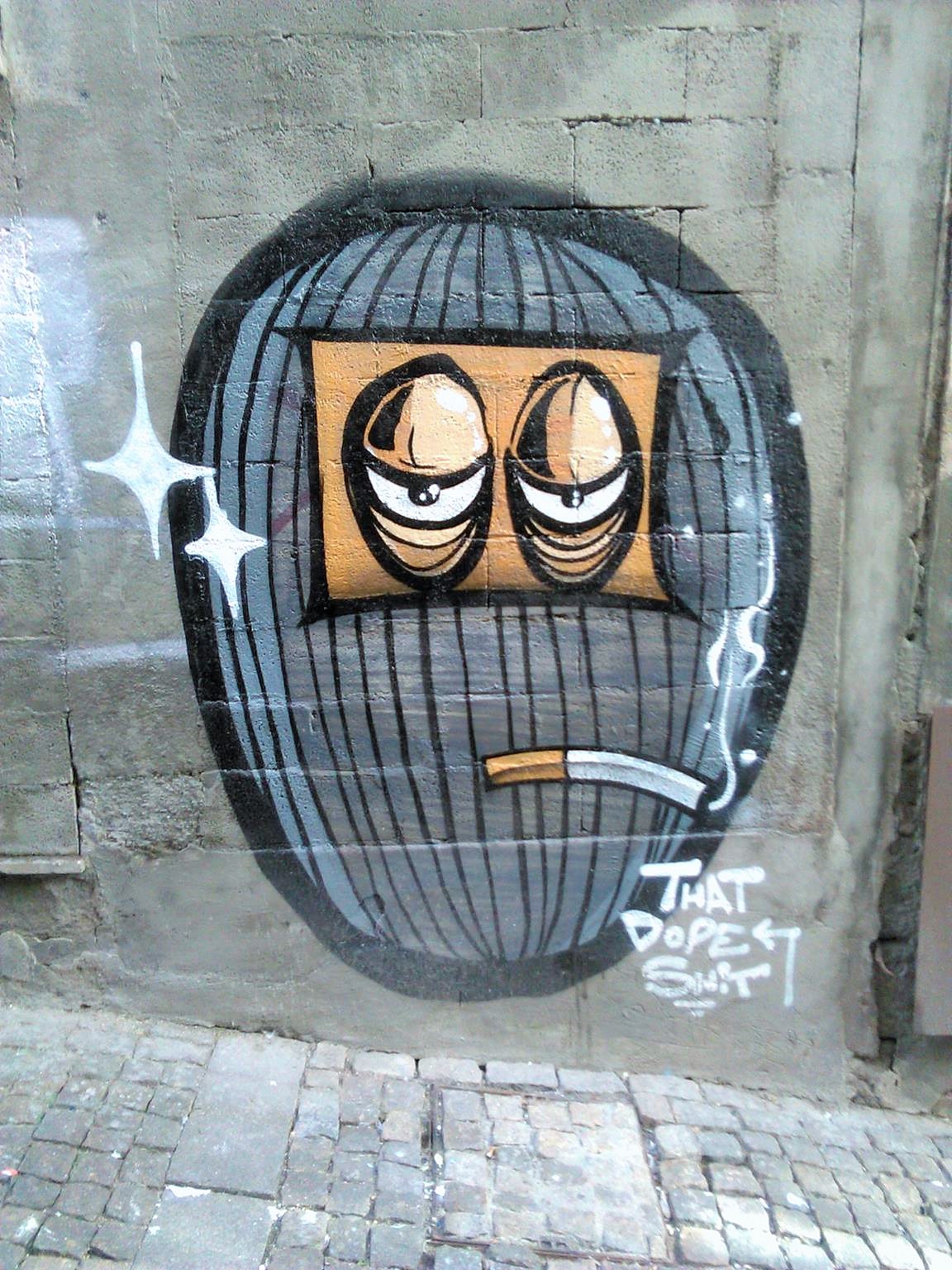 Porto is absolutely rewarding for fans of Street Art. There is a lot to see and admire. The Portuguese rooster is also a stylistic element that appears again and again in the urban landscape. I couldn’t assign many works of art to the artists. That means, of course, that I have to visit the city again. I’m looking forward to that, too. I left the neighboring town of Vila Nova de Gaia pretty broken. There is also a lot in the secret, which should be documented. A few graffiti appear here on the slopes of the Douro, but the city itself is still an unknown to me. Unfortunately, I was unable to capture some works of art, as it is always a matter of time. In Vila Nova de Gaia I would have liked to have kept more. I’m sure this will happen again. This includes the work of “BORDALO II” (also “BORDALO SEGUNDO”) with the name “Half Rabbit” This is a very strong idea and an even stronger implementation. 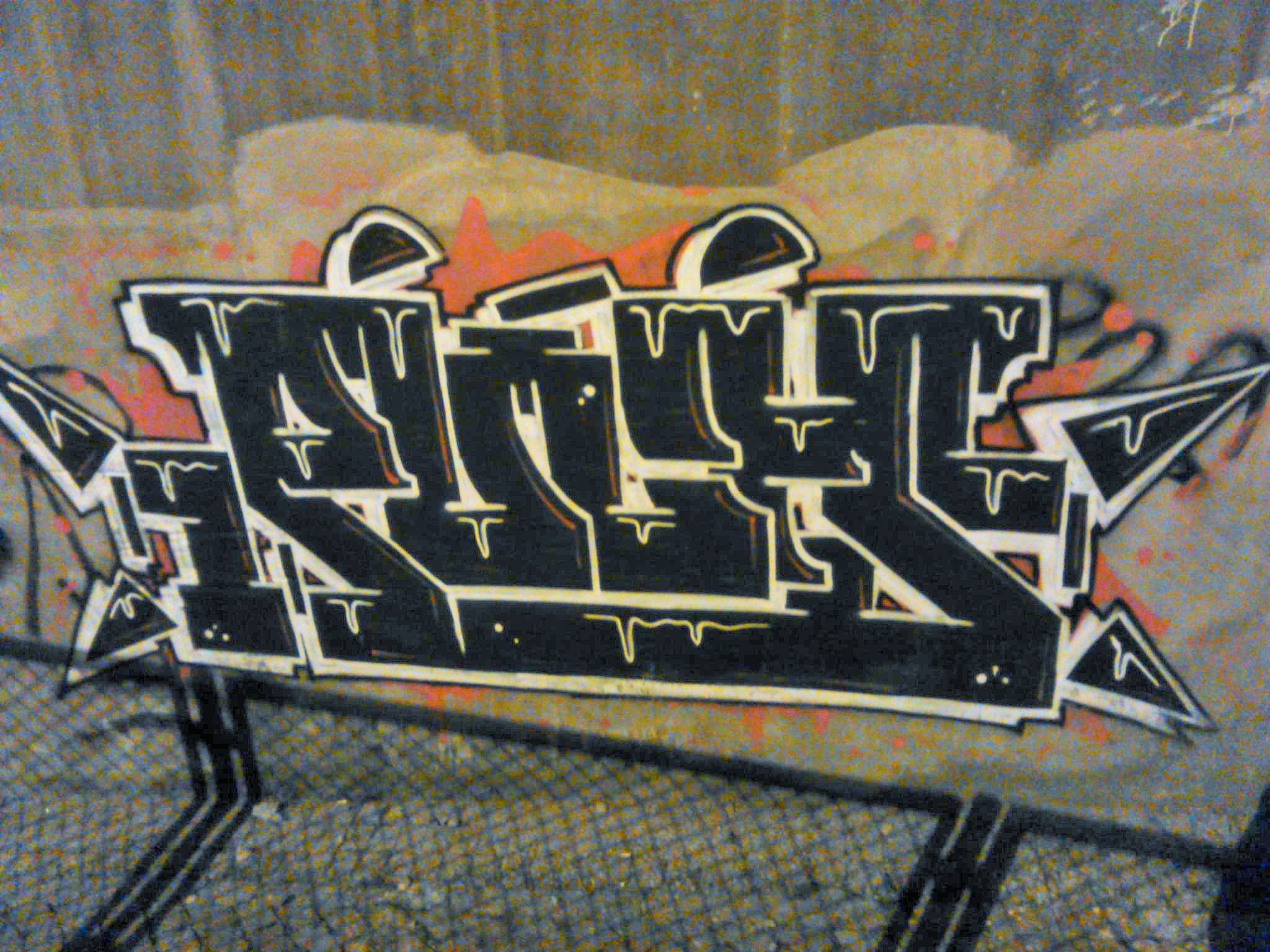 The rabbit is from the series “Trash Animals”. In his sculptures, installations and graffiti elements, BORDALO II” depicts animals that are installed from garbage. In times of climate change, pollution, etc. the elements kill the animals in their natural habitat (e. g. plastic). He creates his own worlds in which trash elements and nature enter into a symbiosis with each other, which is not possible in normal life. “BORDALO II” became known in 2014 with his trash owl. Since then, he has repeatedly created new gigantic sculptures. His style is striking, imaginative and for me personally just awesome. Very socially critical and contemporary art. Absolutely phenomenal.

In conclusion, it can be said that postage is an absolute dream. The city is colorful, captivates by its look and the people and due to its geographical location, this city is in my eyes a real jewelry box, richly peppered with treasures that want to be explored. It’s a big movie theater! 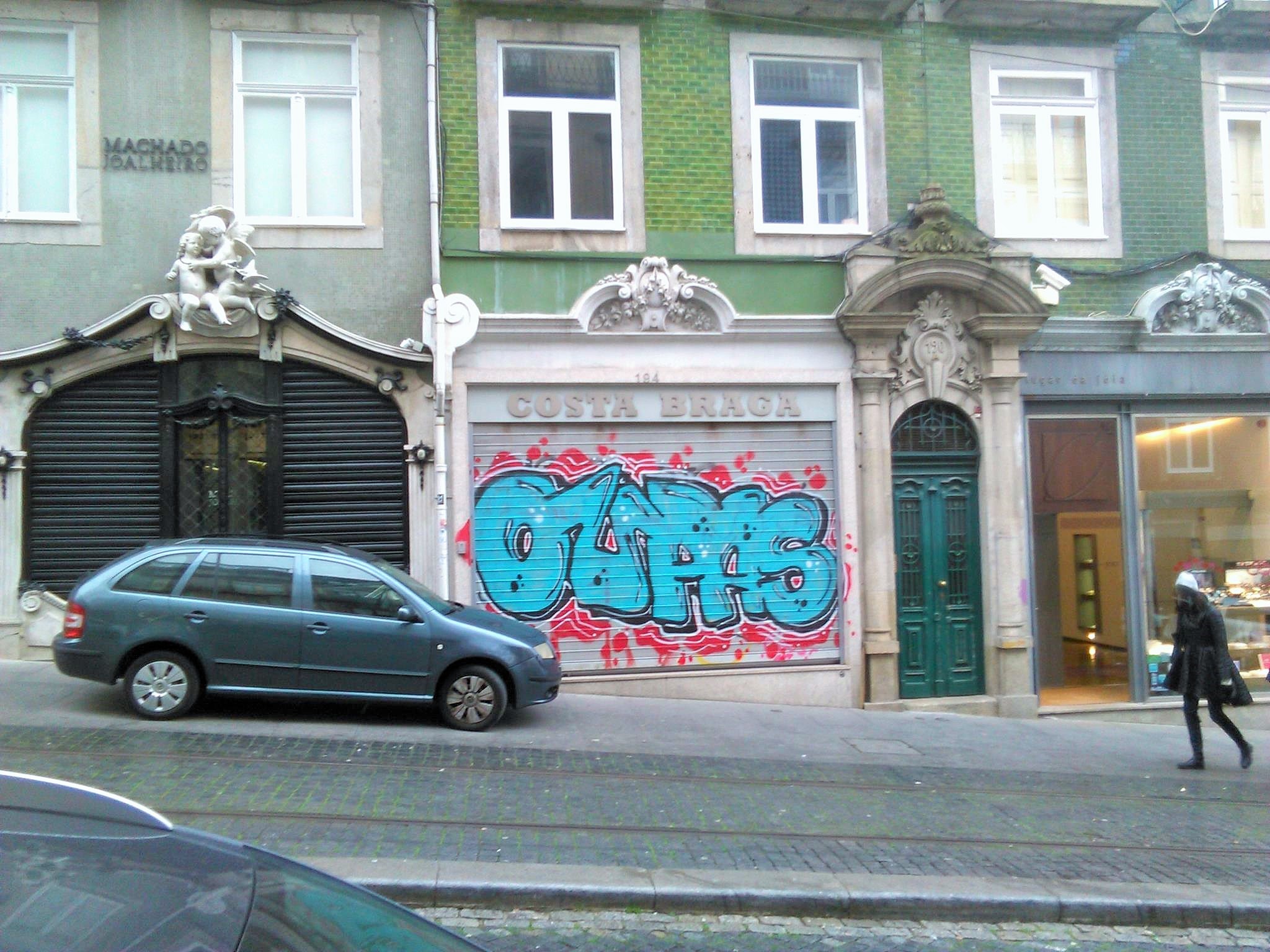 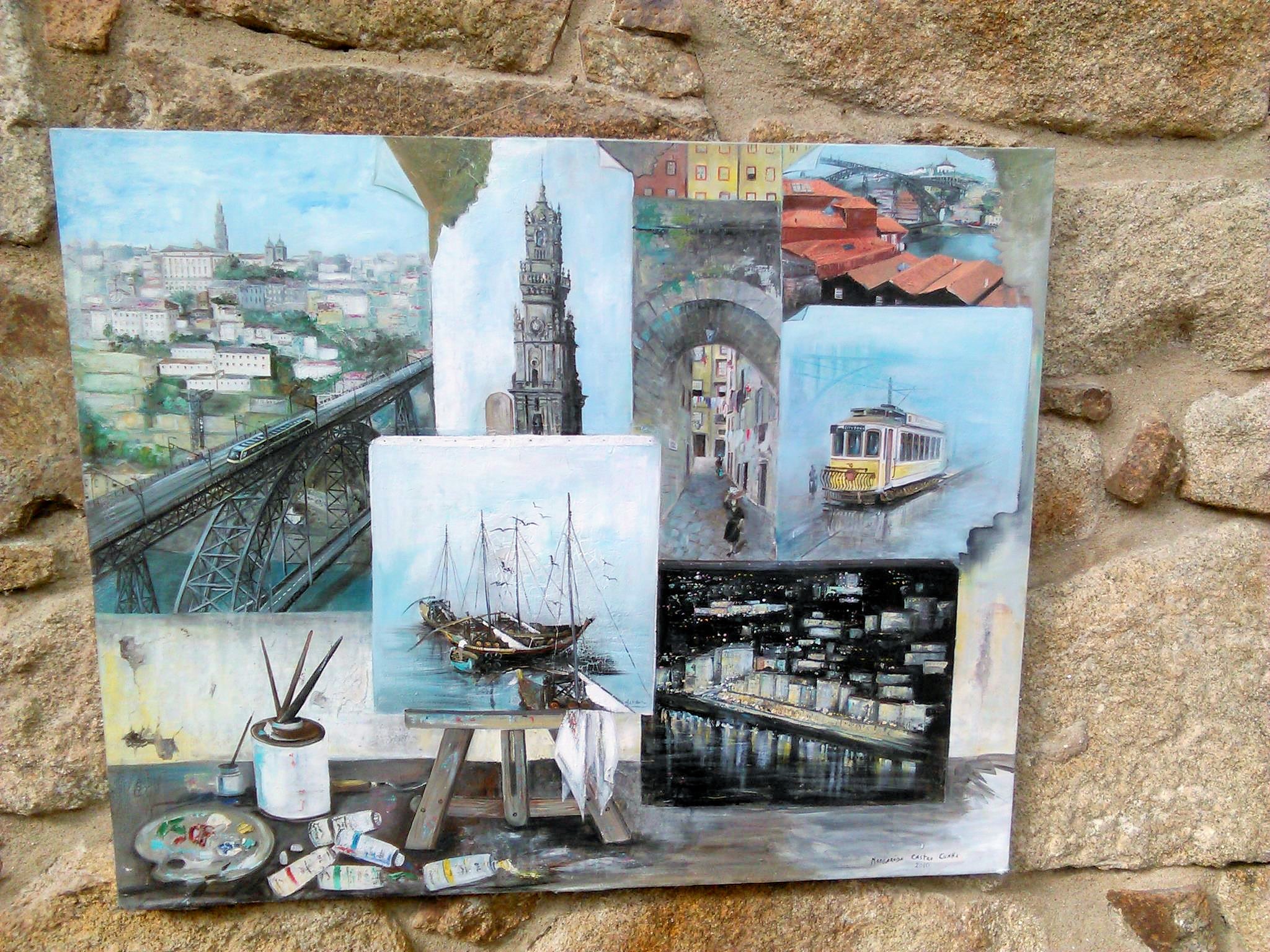