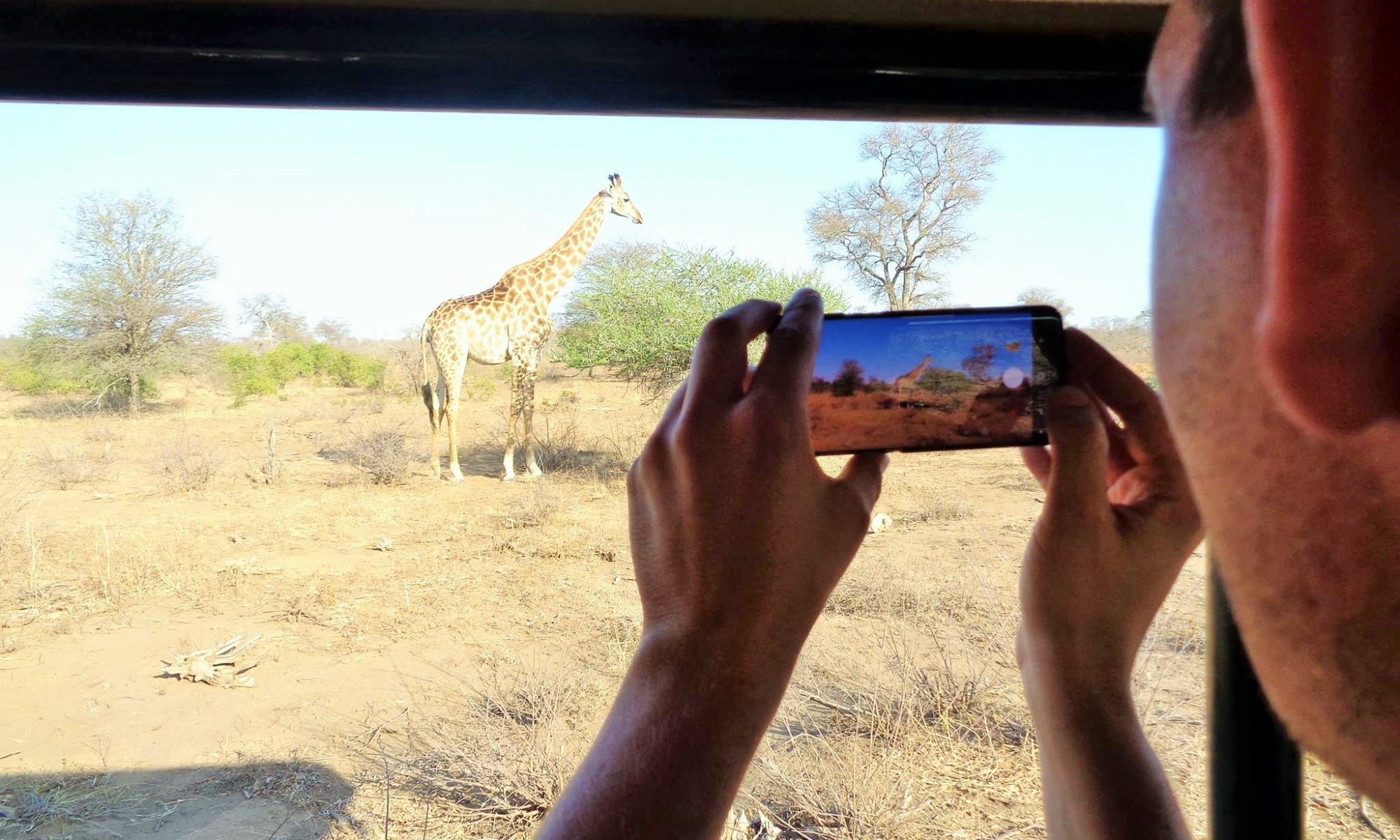 After Cape Town graffiti now safari in the savannah. With an adventurously remodeled observation truck from Drifters, we have spent the last few weeks scouring the South African bush, watching the wildlife in the reserves and, of course, visiting the Kruger Park. There were breathtaking moments and stunning camera shots. 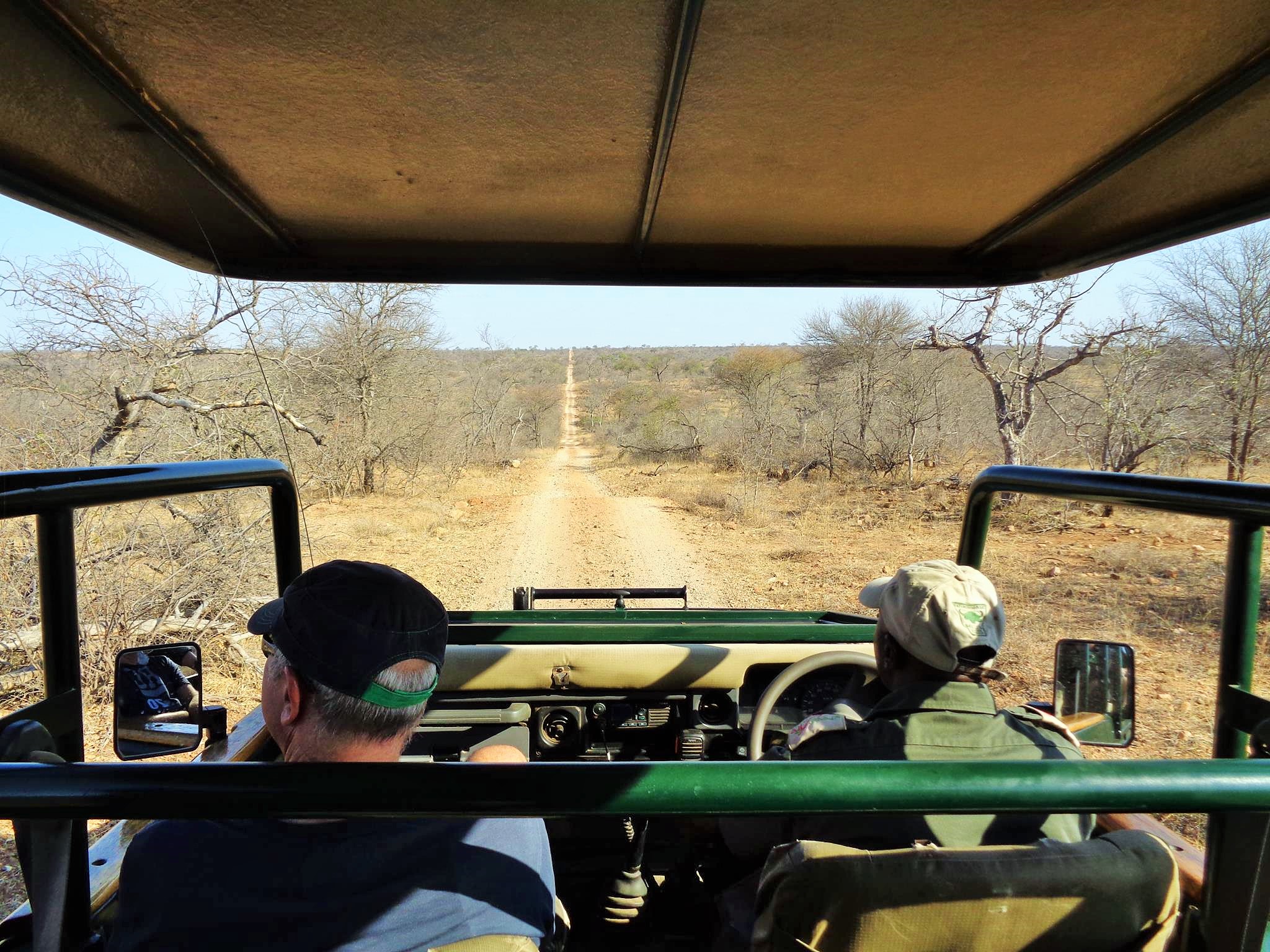 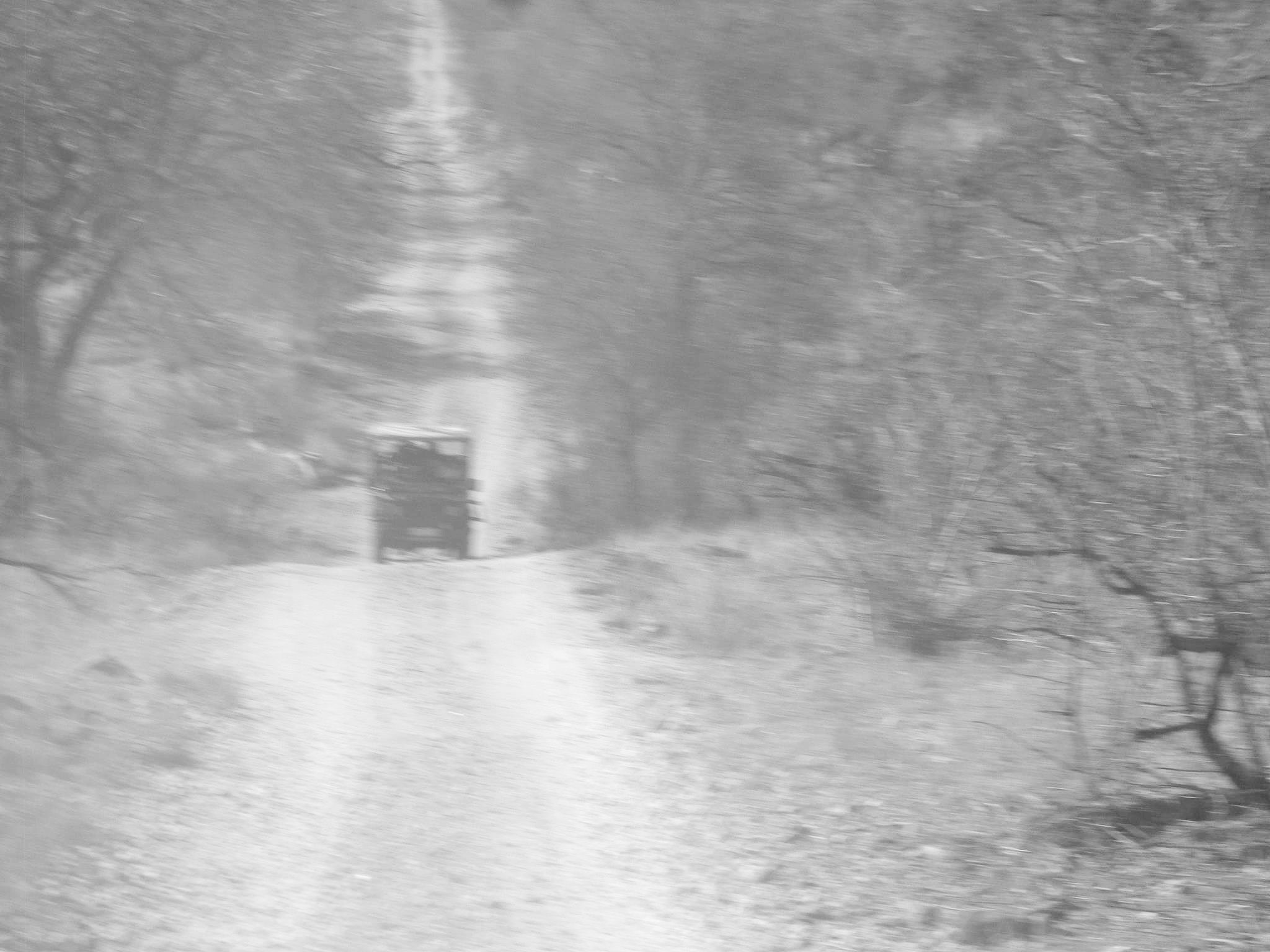 As part of an initiative to protect nature, all fences that separate APNR protected areas have been removed, such as Balule, Timbavati, Klaserie, Umbabat, Grietjie Private Nature Reserve and Kruger National Park. Thus, the animals can freely commit the entire area and the Kruger Park. Ideal to go to “Game Watch”. Game in this context means as much as “wild animal show in the nature”. 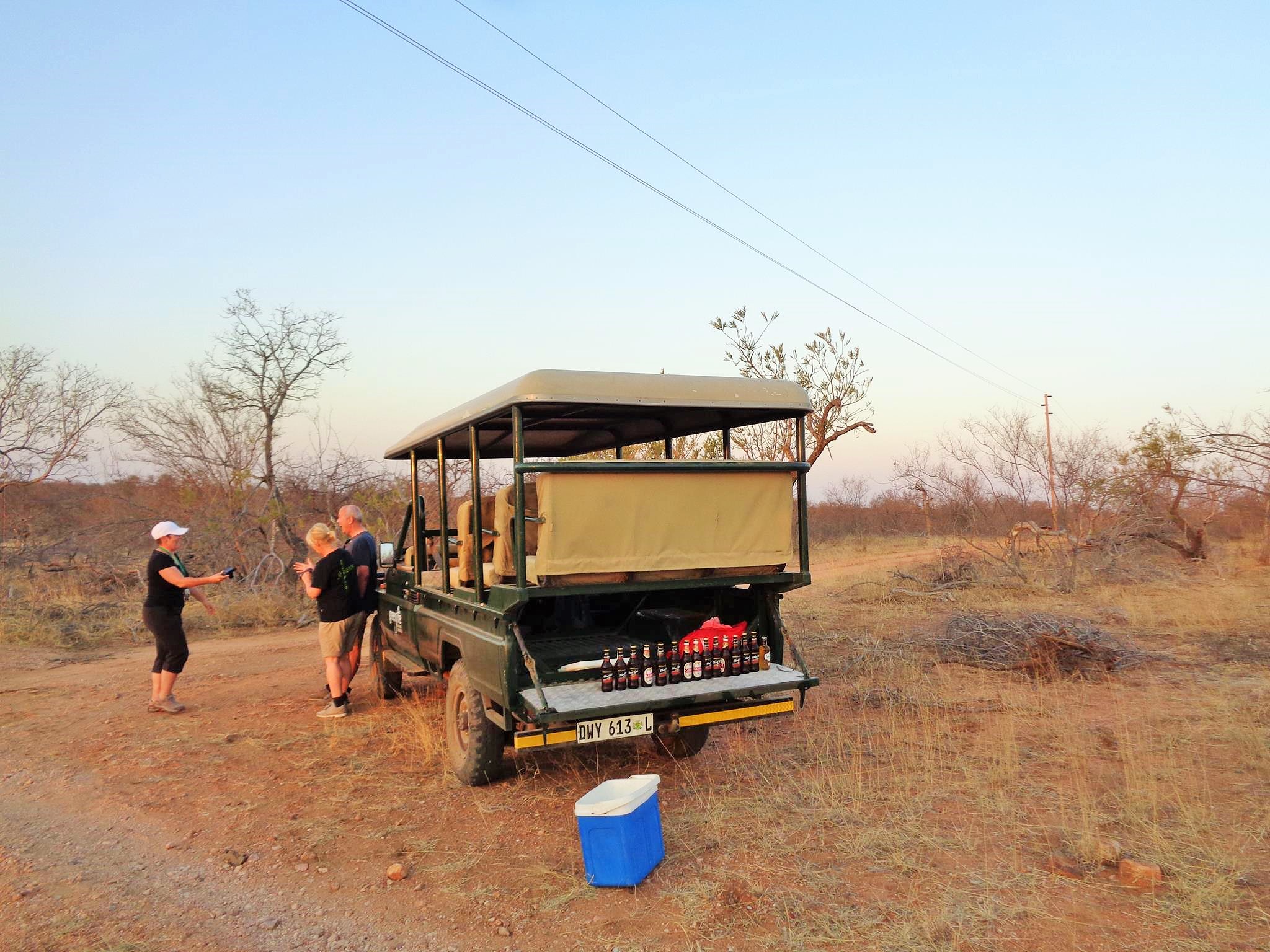 We stayed at the Greenfire Lodge “Andy’s Camp”. A few small tent huts on a hill with an perfect view to a water hole. Of course, a watering hole attracts a lot of animals, but the safari in the wild was really interesting. You can see the so-called “Big Five” in the Balule Nature Reserve. The Big Five are lion, elephant, buffalo, leopard and rhinoceros. But there are also the “Small Five” or the “Ugly Five” and now a lot of other five-rankings. However, the Big Five are the most famous and also the most commonly killed due to hunting trophies. Therefore, these species are also under special protection, yet is poached and illegally hunted. Currently it is not good for the rhinos. 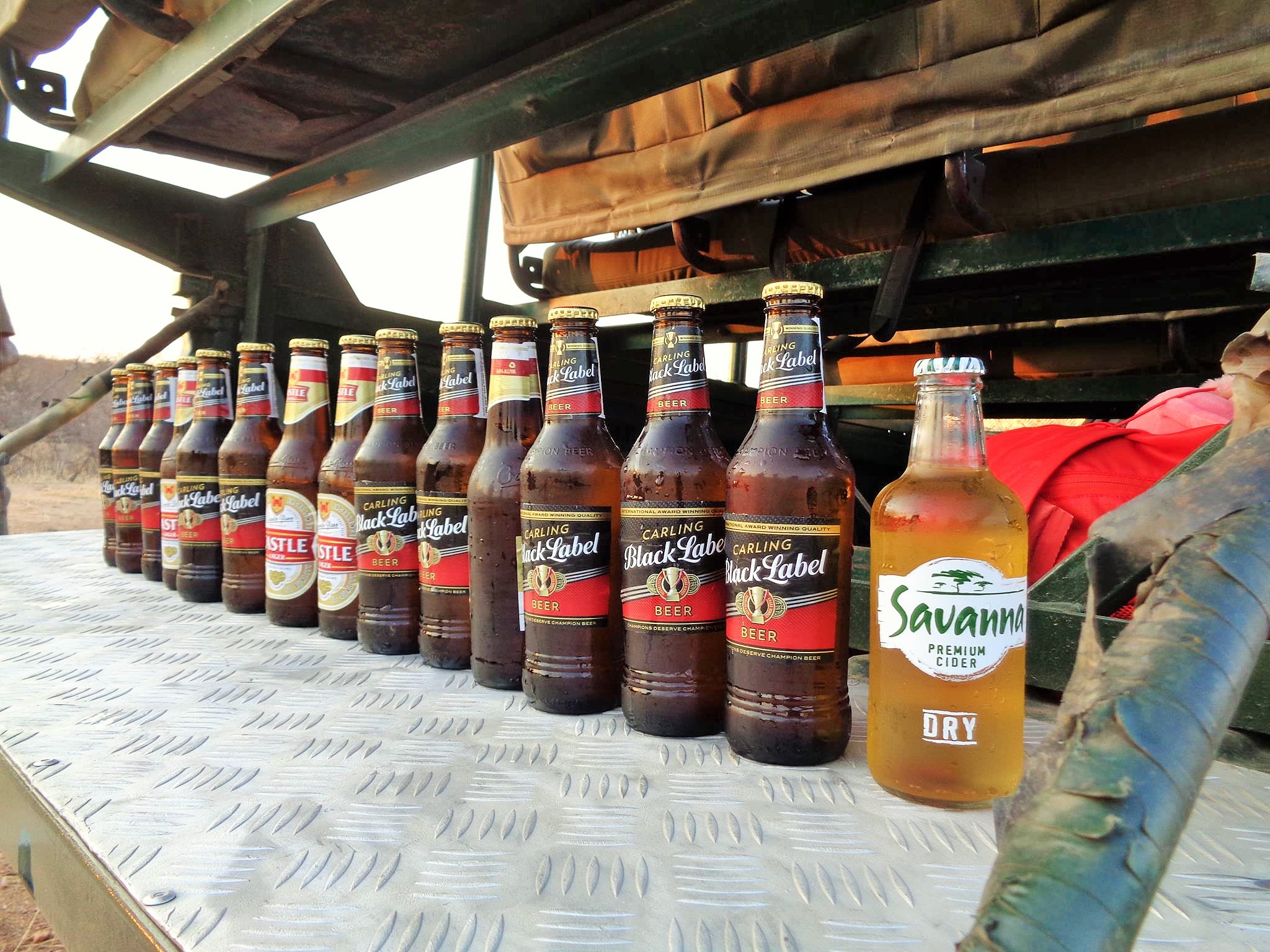 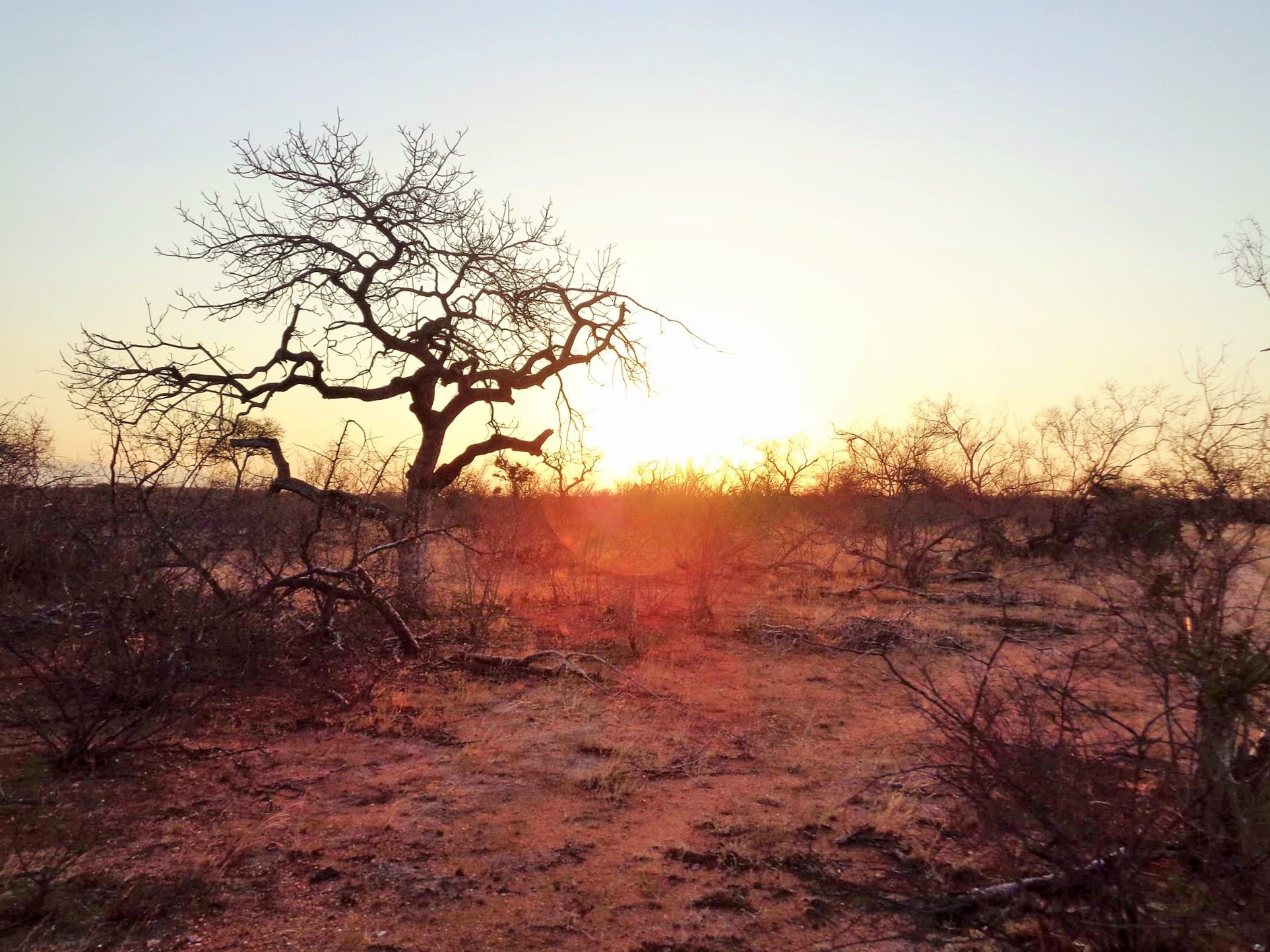 Poachers still invade the parks and kill animals, but the protection has improved a lot over the last few years and an Anti Poaching Unit secures the borders of the Balule Reserve and some of the other parks. Ranger Jika Tibana tells us in an interview about the work in the park, the difficulties in protecting the animals and the precautions for a safari. In the following part I wrote down some passages of the conversation. In between are photographs of the discovered animals: Kudu, Elephant, Giraffe, Leopard, Buffalo, Jackal, Rhino, Warthog, Impala, Springbok, Chameleon, Firefly and various Birds. 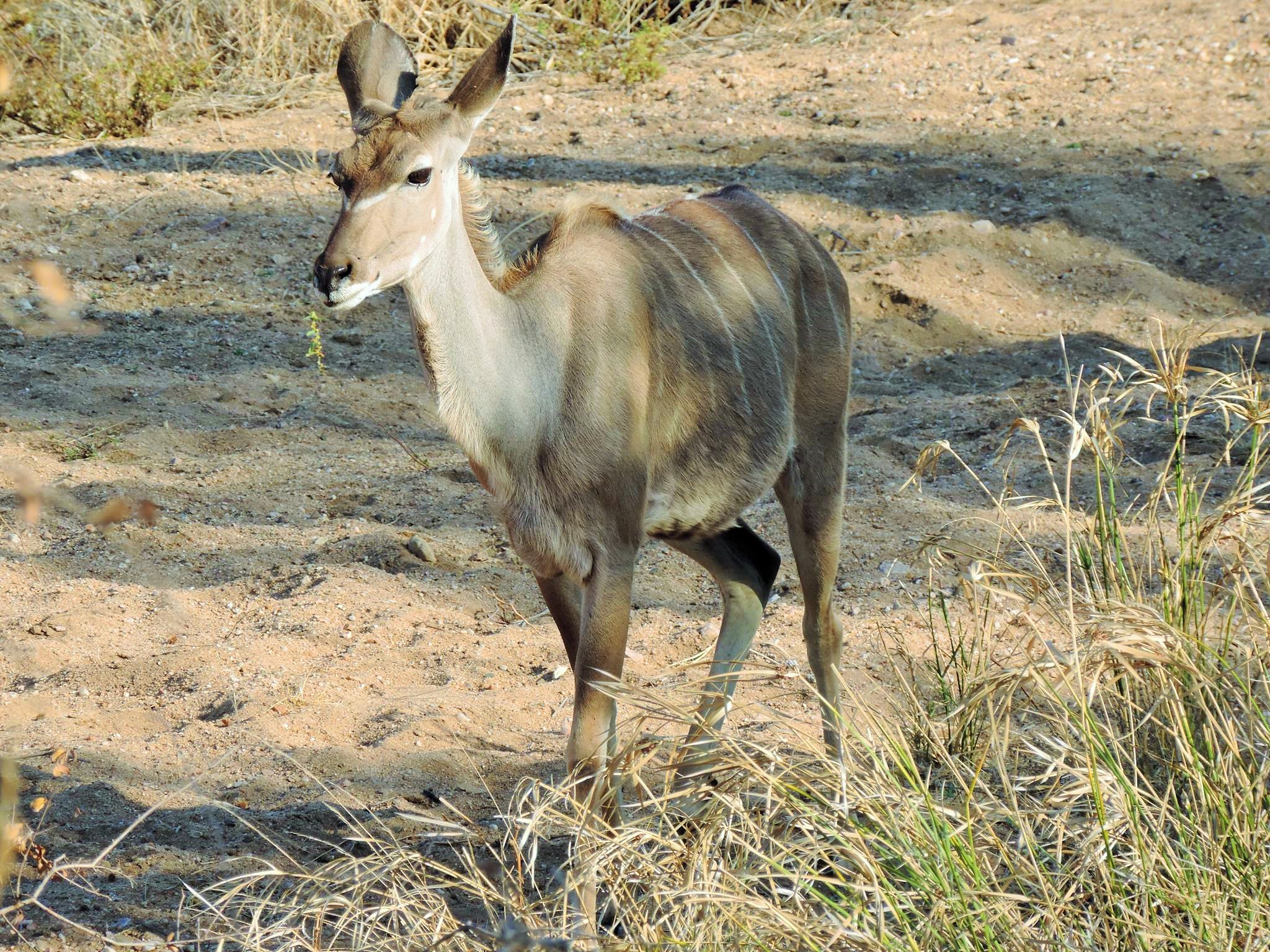 When  did you start your job being a ranger?

I started this job four years ago, but now it´s two years for Greenfire. I was before at other lodges. Since two years I am here. We take care of the animals in the reserve. And we also make sure that the place where we are staying here is always nice. As well we look out. We have now a drought and there is not much rain. In front of our camp there is a waterhole.  The animals just come to the waterhole and drink. We try to balance if there is something out of control. But normally the nature and the ecosystem balance itself.

You said before the animals are like the architects of the bush, they reshape the savannah continuously.

Yes, for example the animals can create their own waterholes. After the rain the elephant can step on the mud. And on that track the some small waterholes will stay there. After the rain stops the warthog comes and can drink there and play. And they make it deeper in the mud. So first the prints of the elephant and then the warthog and now it is a waterhole. The next time then there are buffaloes or others coming to the waterhole to drink there. They play there as well and the waterhole is getting bigger. If it is big then in the end also the elephant can come and drink water there and do the mud bath and a shower. And then the waterhole is bigger now. So the animals are creating their own waterholes. 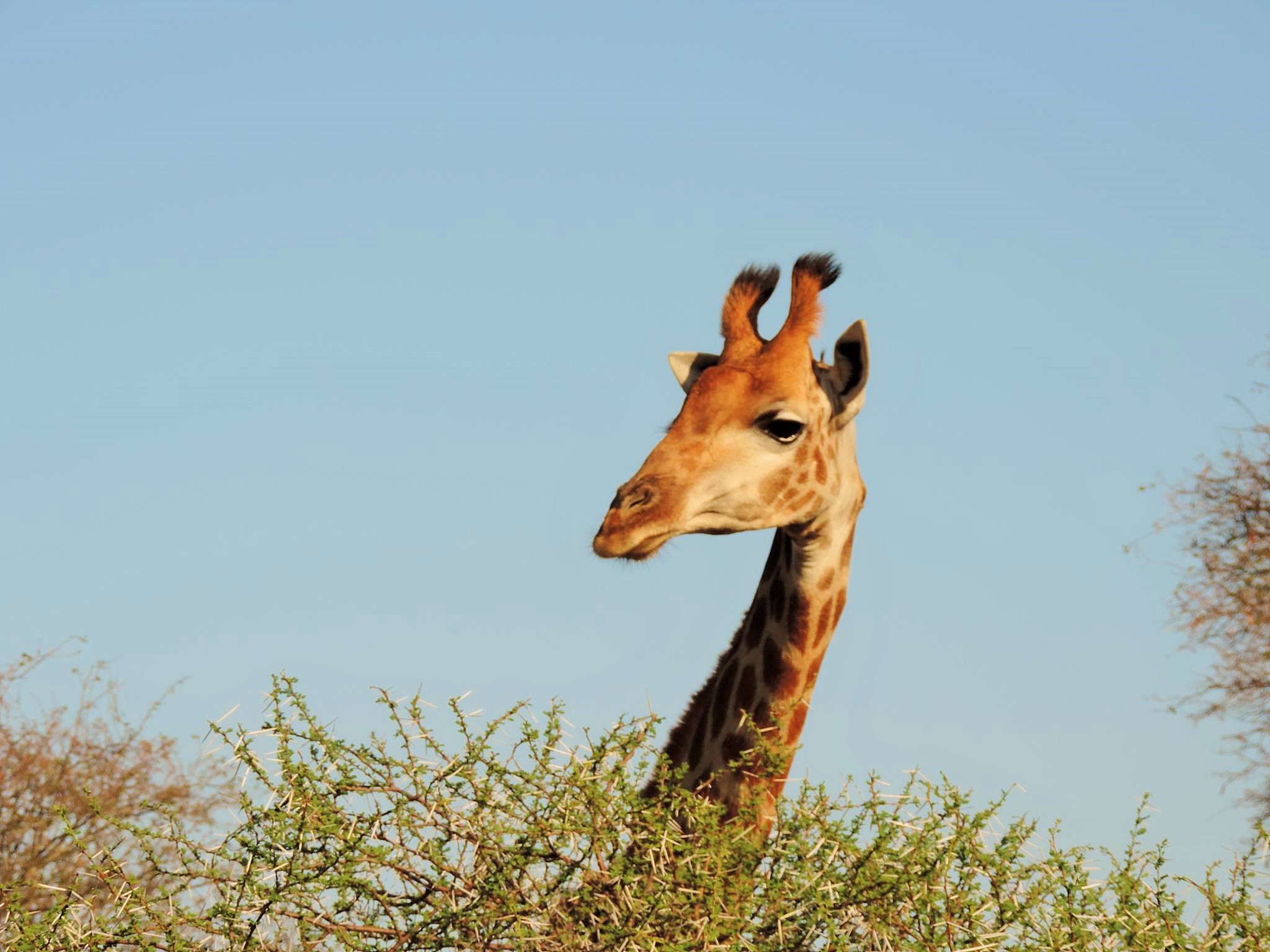 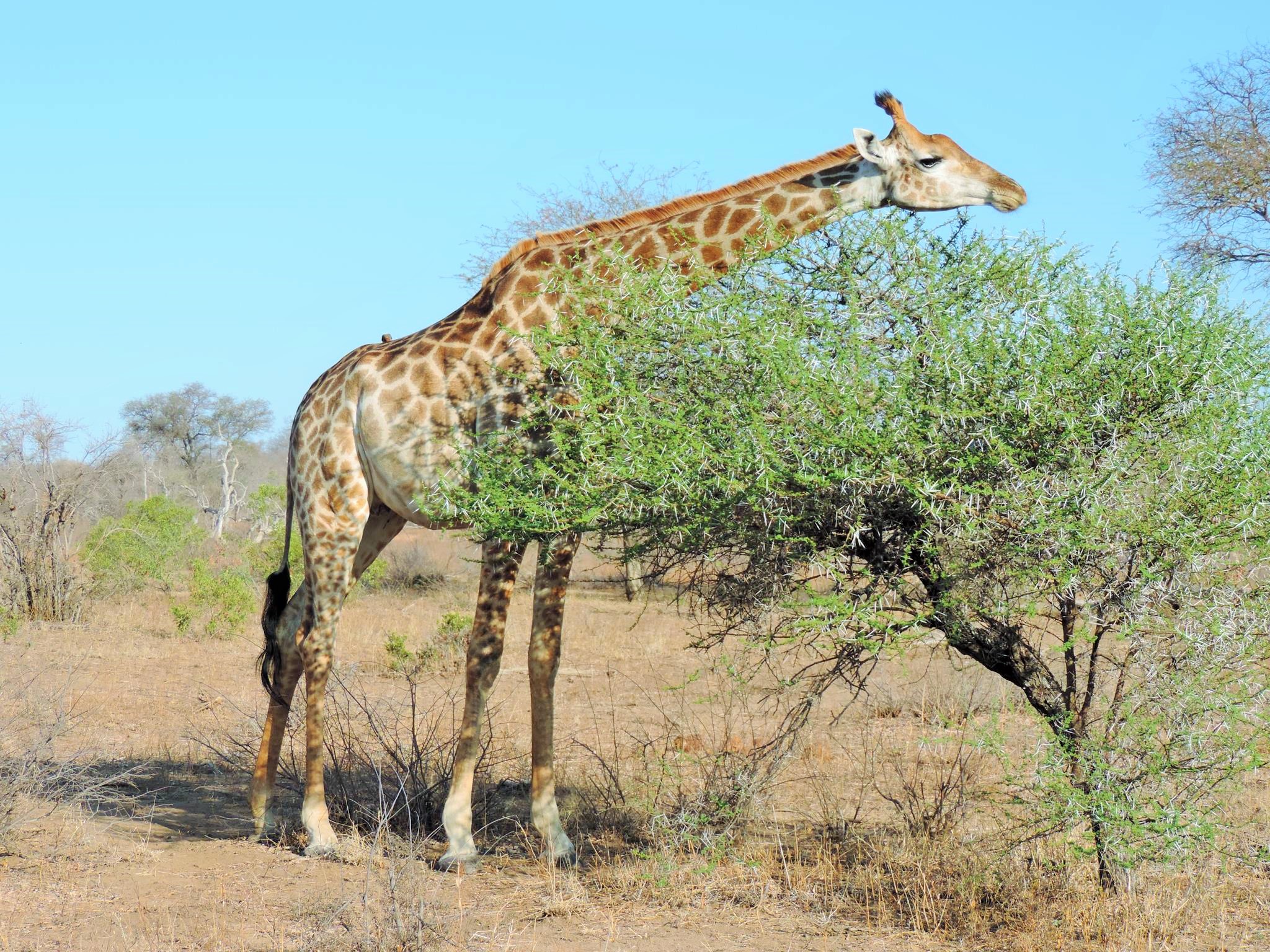 What kind of animals do you have in the Balule Nature Reserve?

What are the biggest problems or dangers for the animals and the area?

The animals I cannot say that they are in danger. It´s only the Rhinos. Yeah. Because people are coming in to kill the Rhinos.  To poach the Rhinos. But at the moment we are trying to control that situation comparing to maybe five or six years back. And now the situation is getting better because we have not the Anti Poaching Unit who are staying around. At the night time and also during daytime protecting our areas from the poachers to come in and hunt the Rhinos illegally. 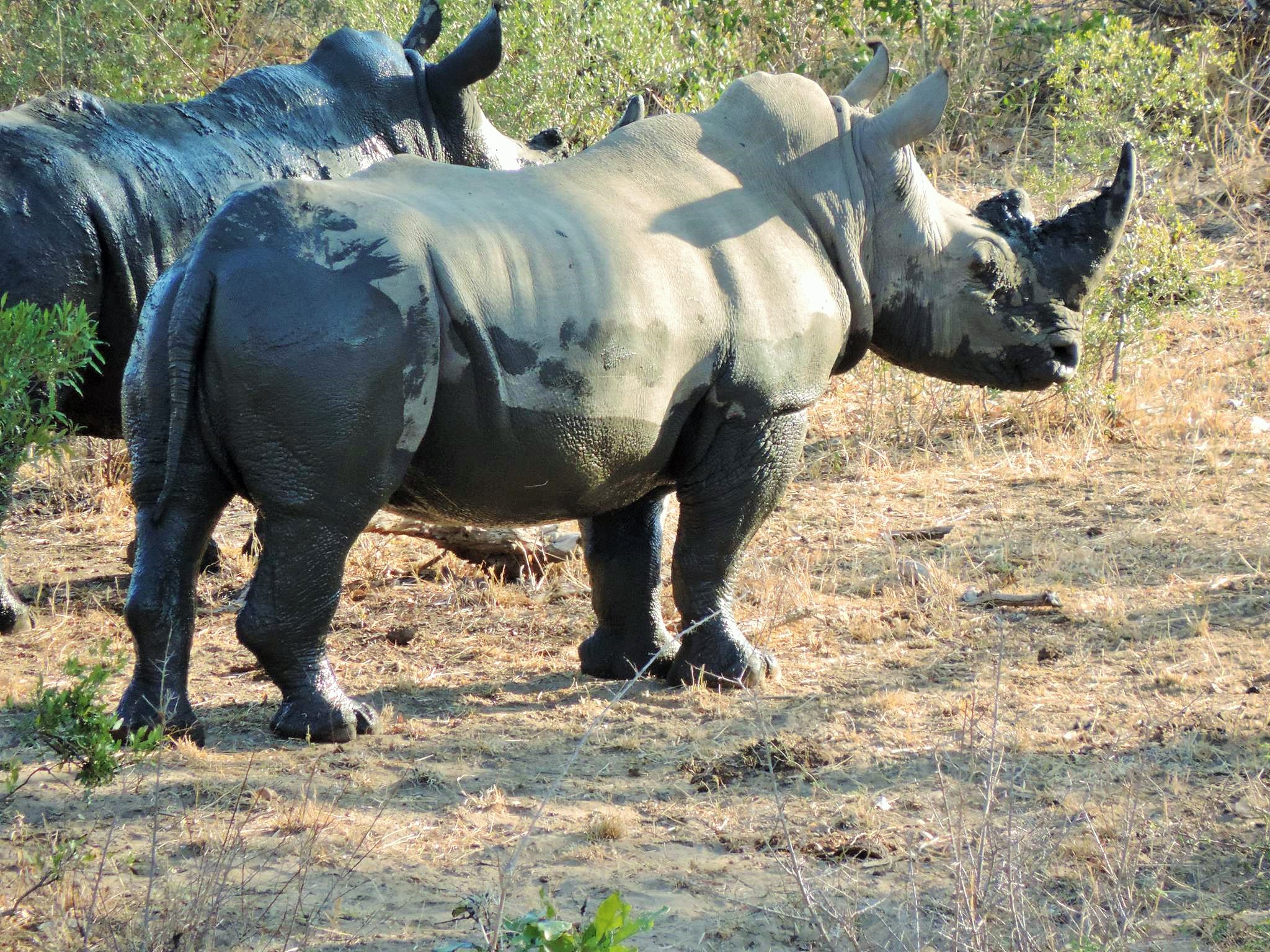 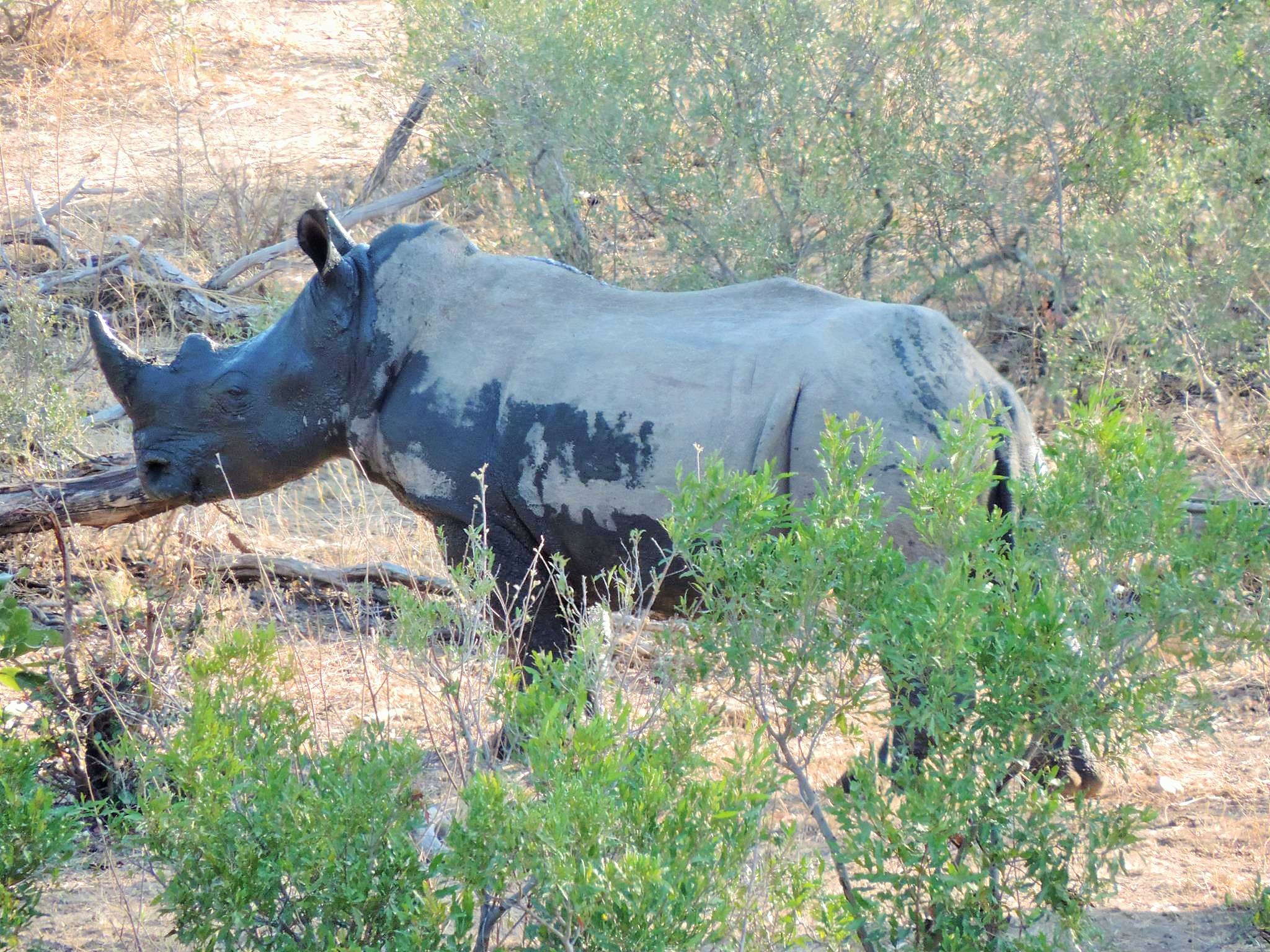 What does the patrol do then if they approach a group of hunters? Do they fight?

They do fight. Back a lot, but now we are the ones who own this property. We look and see when they are coming before they see us. So we can radio each other and then come and take them out. We don´t kill them. We just take them out of the area. And then maybe they will go to somewhere where they have to explain why they are here. Because you cannot just kill them or take them to the jail. You need to ask them first to see what they have got and to be sure. 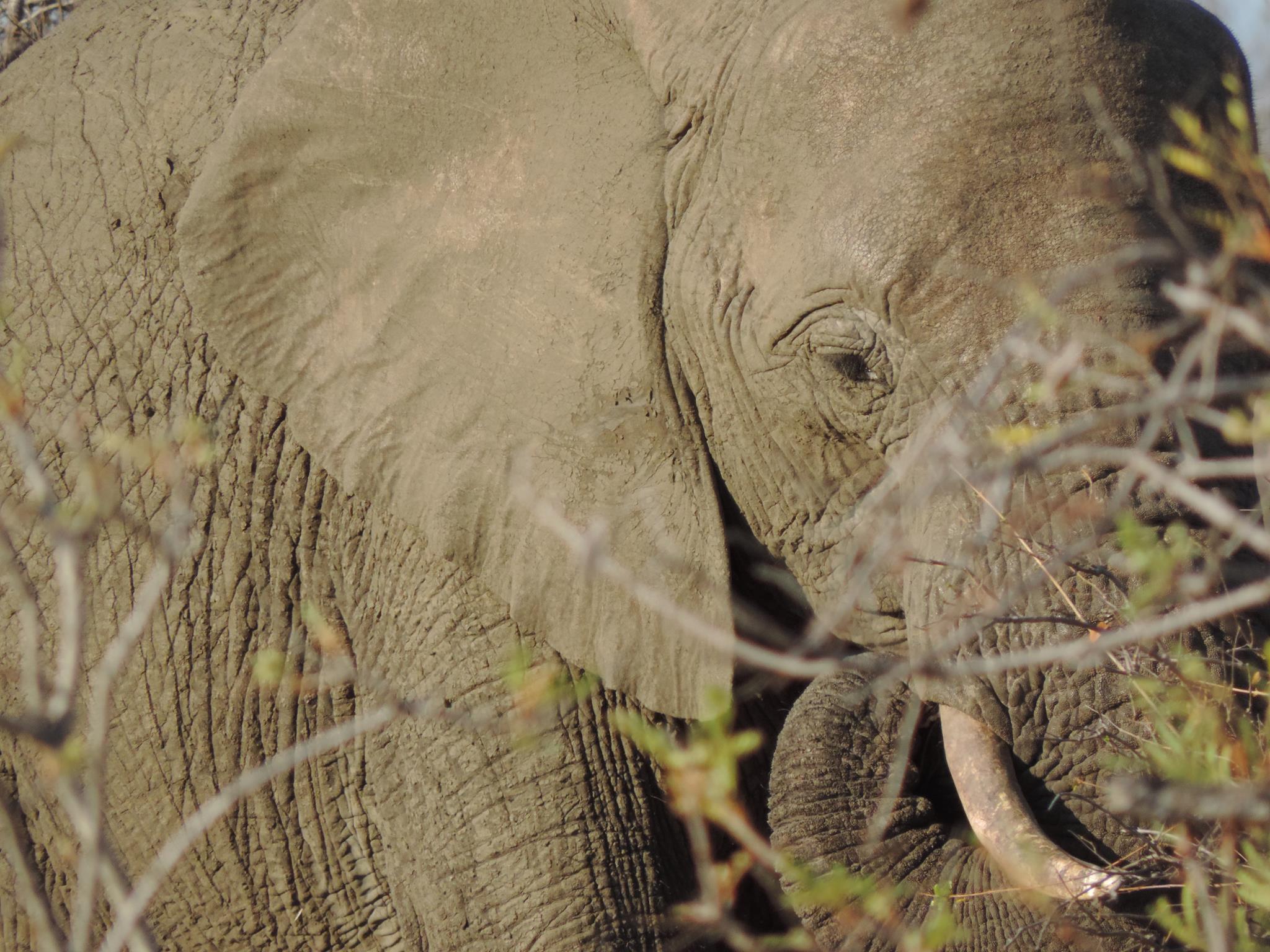 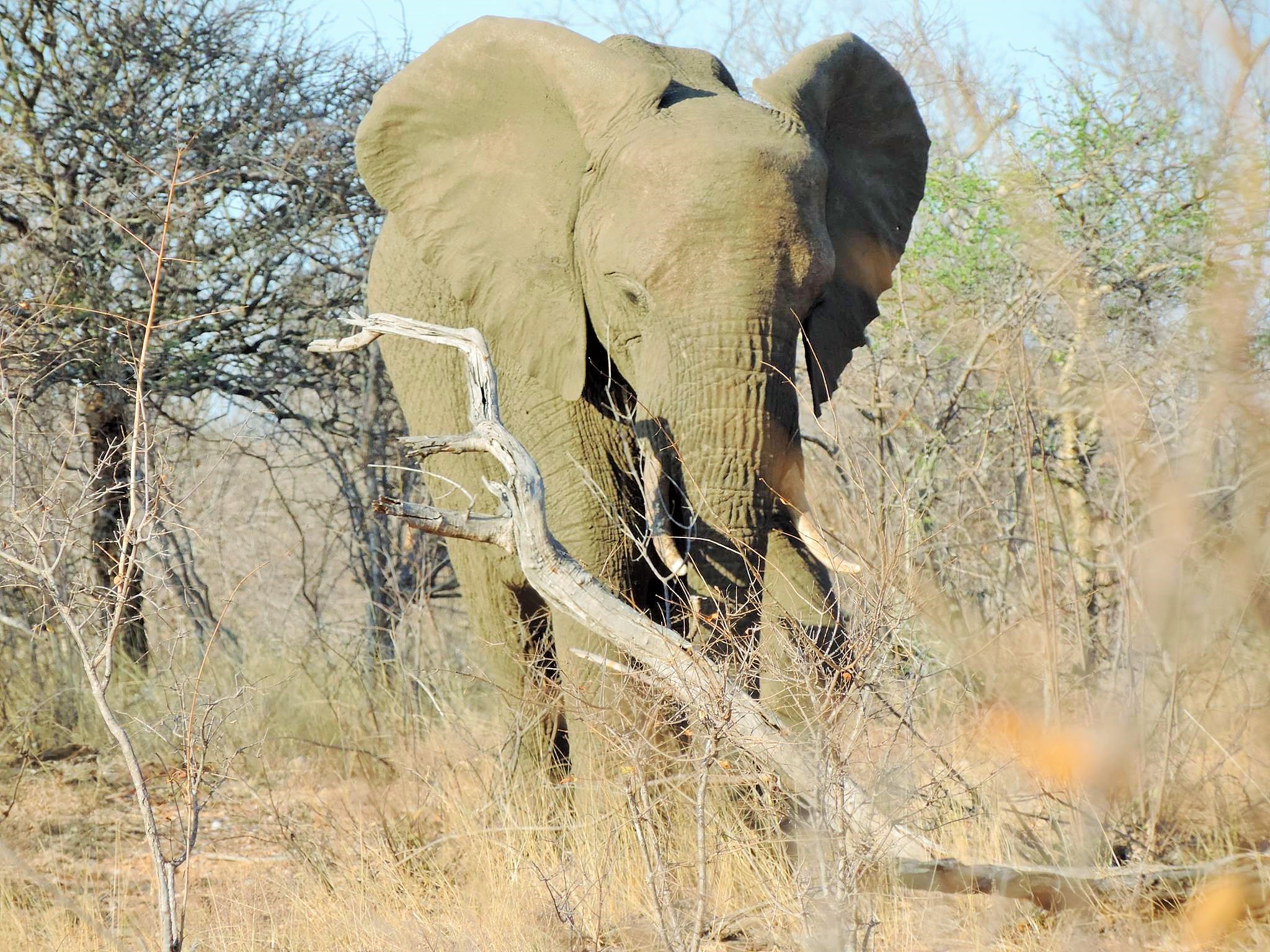 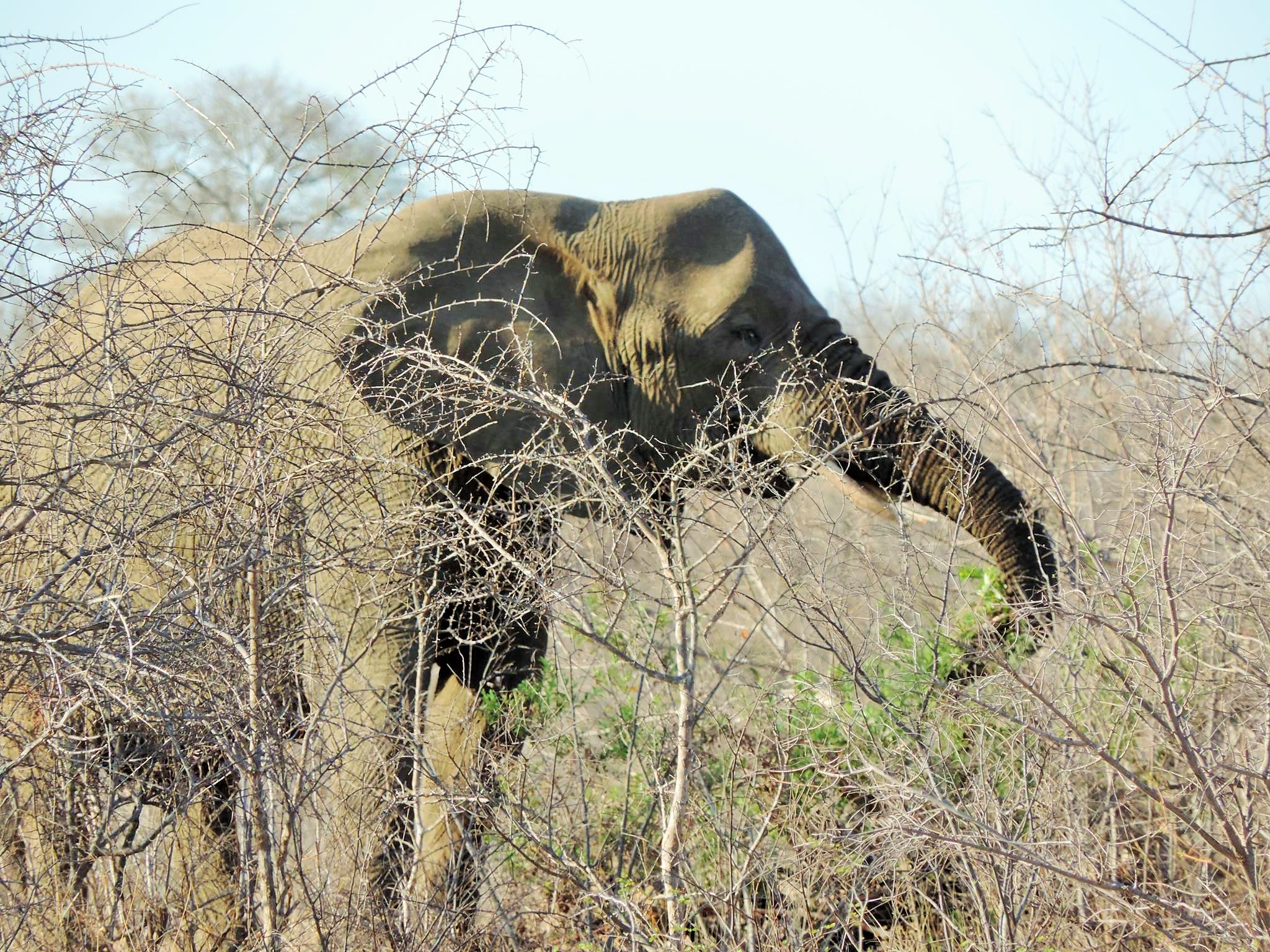 Are there more laws now? Or is there more support and protection from the government against such abuse?

There are only us people who are working here. Like our boss here from Greenfire. He also comes out and camps here and is trying to see if there are people coming in. He sometimes comes out and is helping the Anti Poaching Unit. It´s his feeling, his wish not to see the Rhinos get poached and become less in number. There are as well other people and parks who have this Anti Poaching Unit. Some more have people to come who protect the area privately. 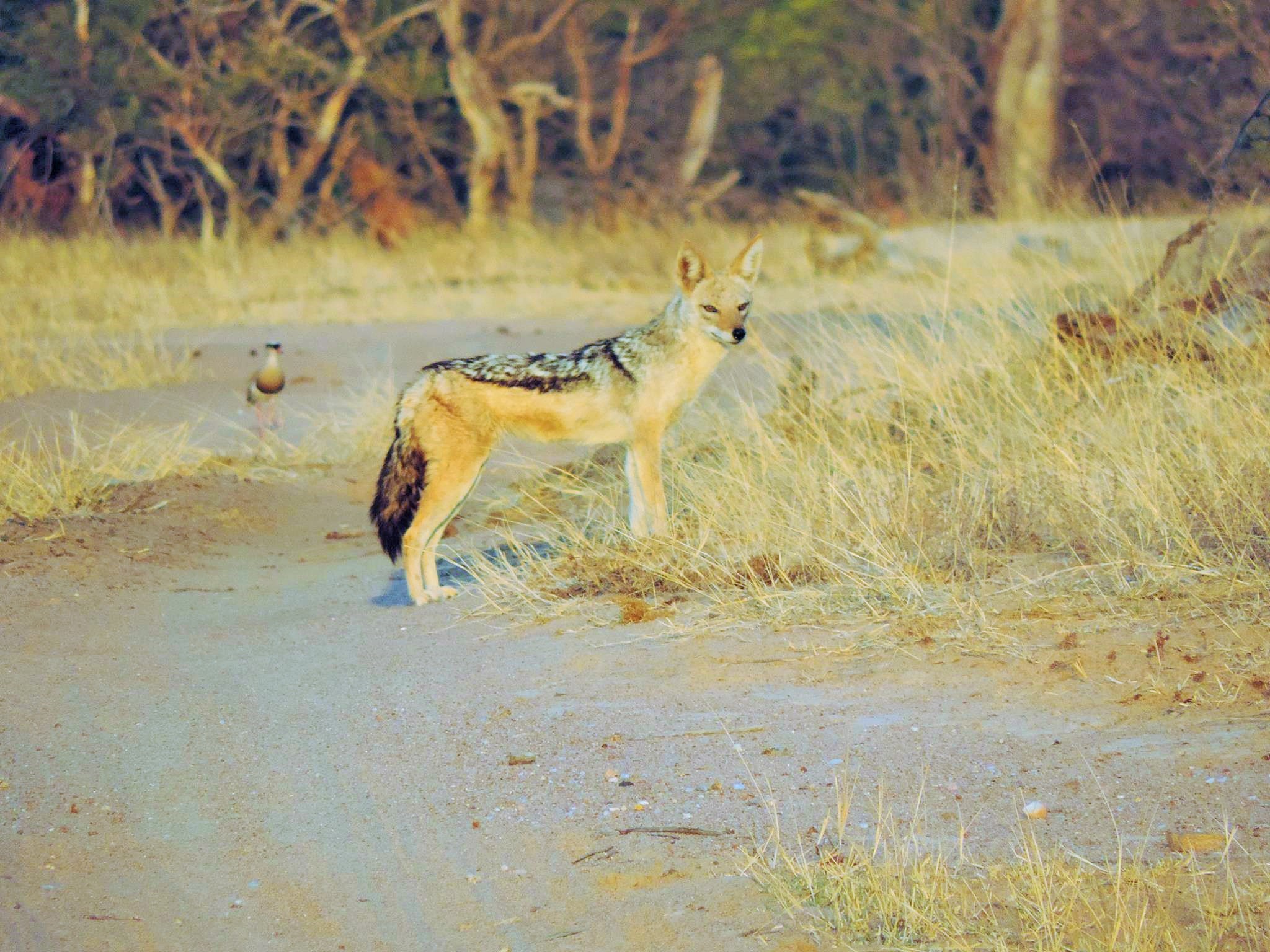 So after all is it okay to come into the reserve and to go that close to the animals?

Yes. I can say it´s okay for them because by building this camp, this lodge here in the bush we are protecting them. We are not just here for business, we are looking out for them. So when we are here, no poachers can come and hunt them. The poachers know that we are here. They can see that there are people living here. And also the animals are not feeling like disturbed. As you can see in front of us, there are buffaloes and they are just drinking. They now are used to see us around them. 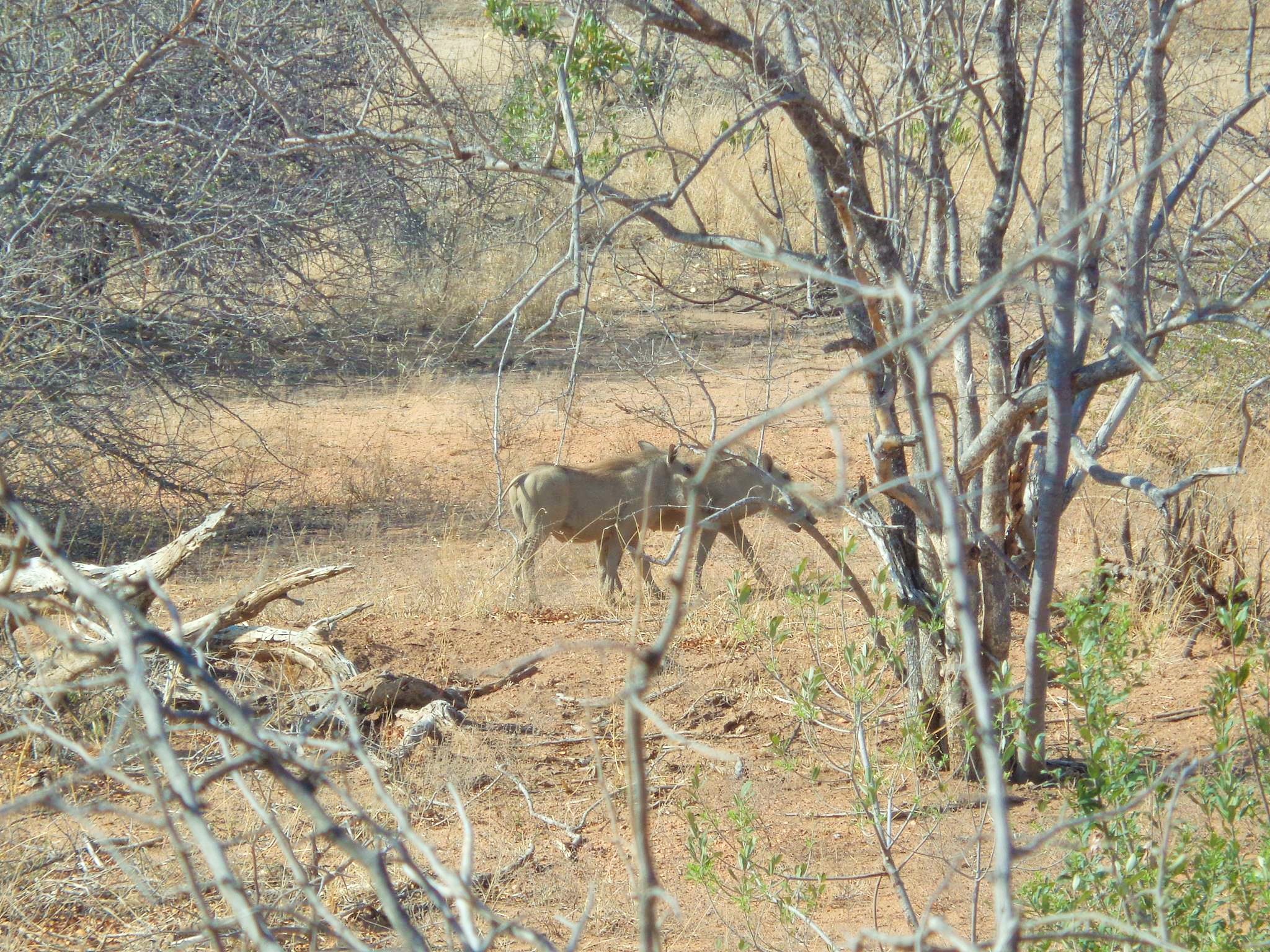 Do you they know that we are not the enemy? Or maybe even somebody who helps them?

Yes, they know that we are not the enemy. They know very well. And especially when you can look when we are on a safari. You can drive very close to the animals like the Lions or the Leopard. But they won´t charge us or run away. They would just continue to walk their way where they are walking. They don´t mind about us. They know, they are used to see us since they are born and they are used to see this tracks around them. So it´s normal to them. 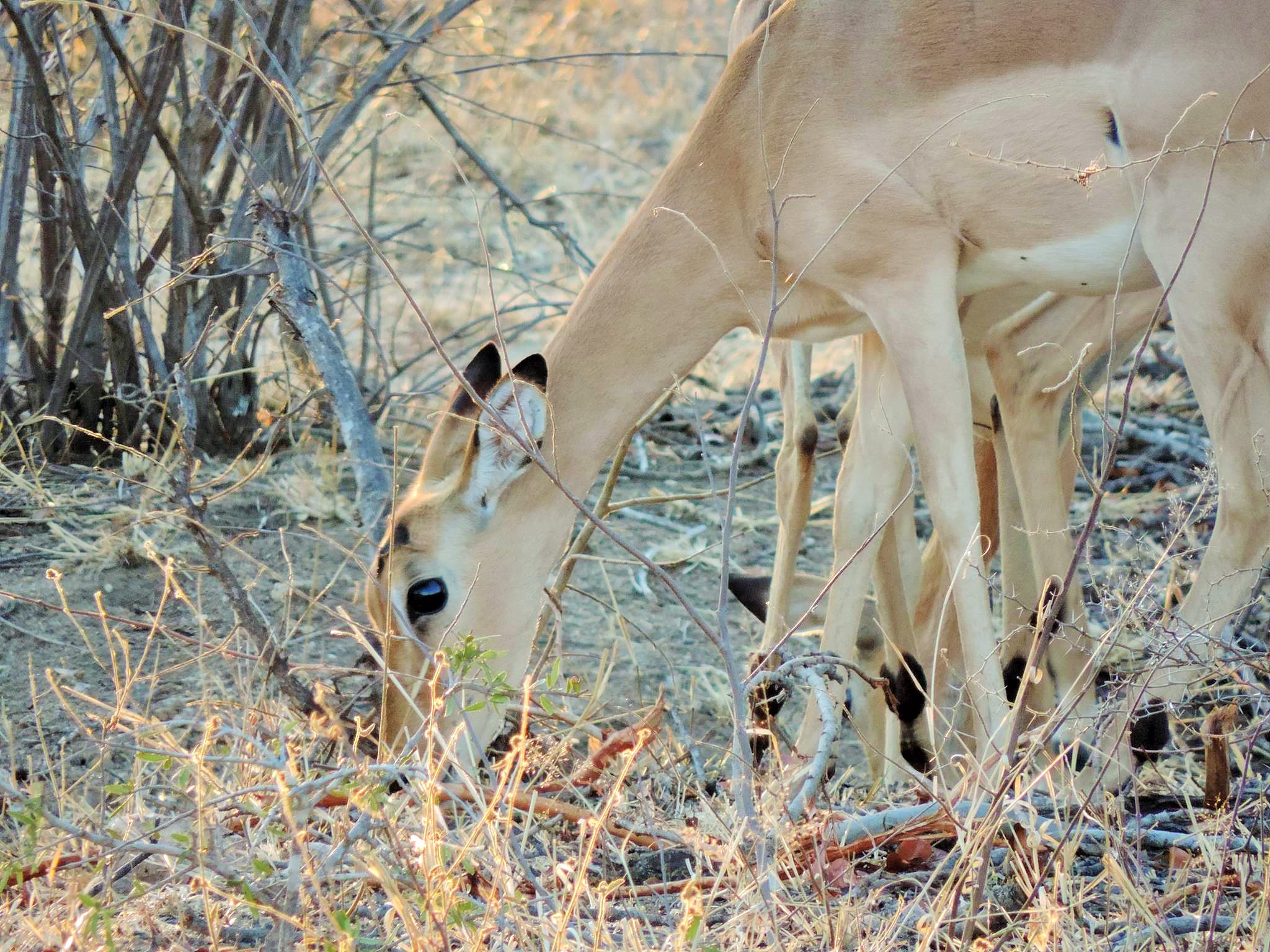 What else is important if somebody wants to visit the reserve?

Visitors should listen to their guides when they visit the site. They should always follow the rules for their safety. Like you saw it this morning during the bush walk. We started by giving a short briefing which is giving you something that can make you stay safe when you do the bush walk. And also when we go for safari we aregiving the visitors also a briefing for the safety. To know when you can feel free, and to know how to be close to the animals and not to scare them or to disturb them. As long as you keep on the rules that your guide is telling you it is fine. 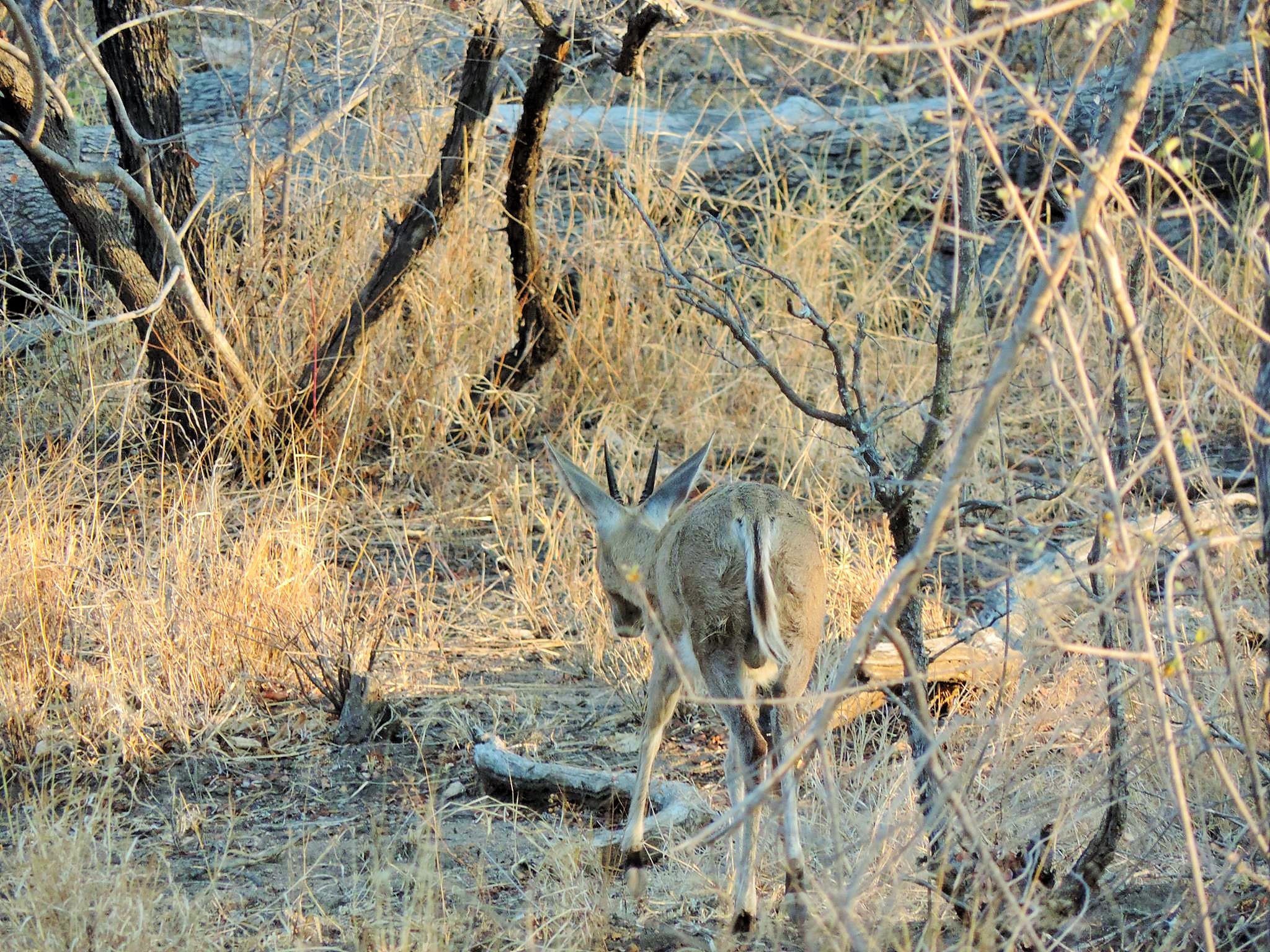 If people come to visit the reserve like we do, it´s actually helping you?

Yes. We also use the money that the tourists are paying here to pay the Anti Poaching Unit. That´s how we do it. We try to get with that way something to pay the people who are also helping us to protect our animals in the reserve here. We are all working together and it is very important for us that you guys visit us here. As you now are here you should get the feeling that you are doing something in this country. Because you are paying to stay with us here and then you are with this also paying to protect this area. For now I can say the situation is slowly controllable now. Just because of the tours who are visiting us. When you pay for this we are able to manage the park and to pay the people to look after this reserve. And to look after our animals, our Rhinos. 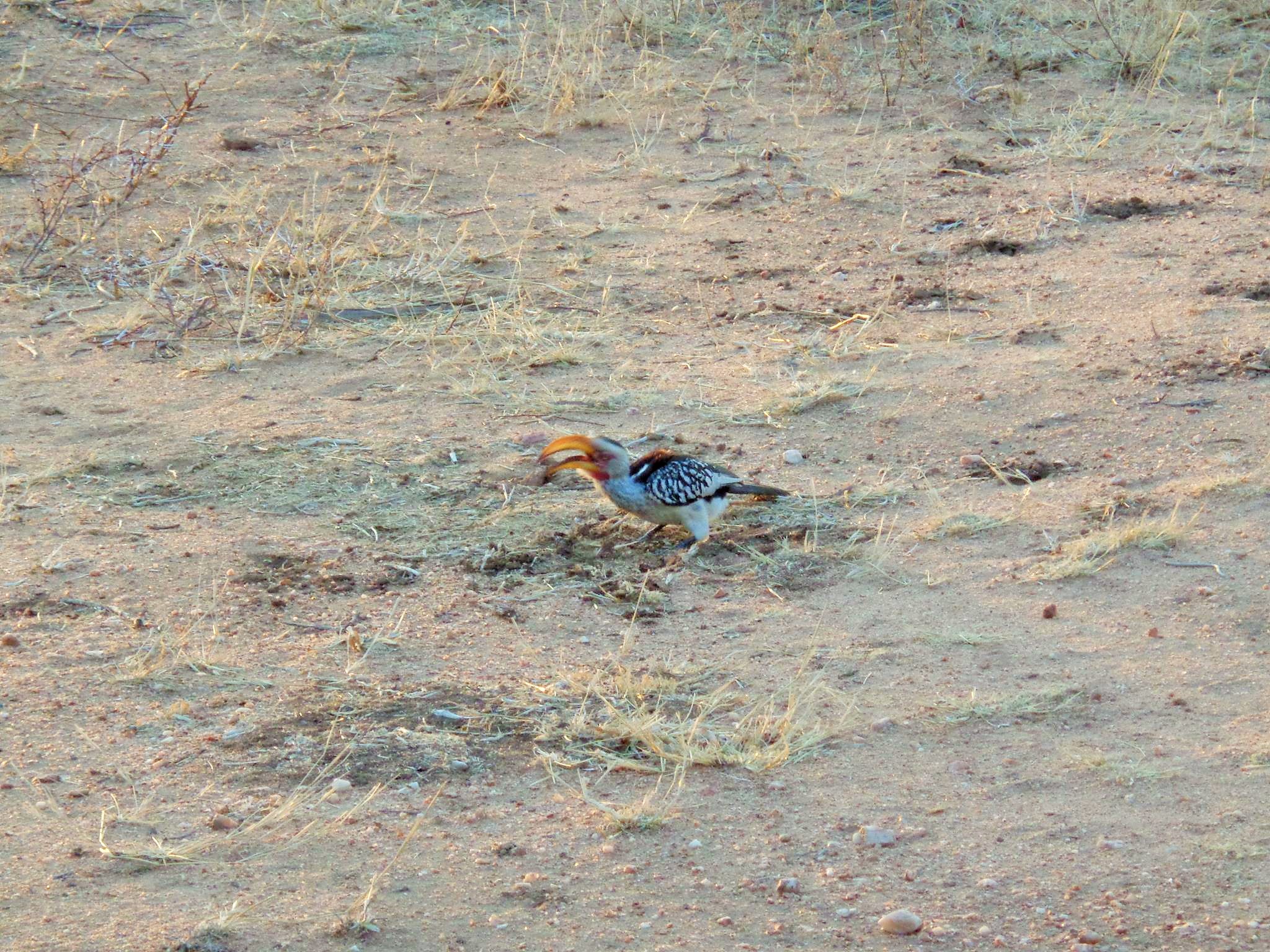 Is there any place around the park or a village you can recommend for visiting?

Yes, there is a lot. Everywhere on the road when you drive you can see things. I think you were passing some of the villages to come here to the camp. You can see on the road that some of them are making a business of selling the traditional art craft. There is no special place I can you refer to. But on the way there are a lot people and shops alongside the road who are selling this African art and stuff. Which can also help them when you are buying their stuff. You are supporting them. So they can stay in that business and don´t go poaching. So you as a tourist you are still stopping to kill the animals by supporting them. By supporting the street vendors.

What else is important to know when exploring the bush?

Before we go for safari we tell the people always to sit on the vehicle. Not to stand up. The reason is that if the animals see you stand up they recognize you as a human. They might attack you. But if you stay seated at the truck they will recognize you as one big truck which they are used to see every day. You should also not talk very loudly. You can talk on the vehicle but in a normal volume of your voice. The reason is that we want the visitors to see the animals. If you talk louder you can only see the back side of the animals. Because if you make noise you disturb them. So you cannot get nice pictures. You need to follow the rules in order to get the nice view and in order to stay safe. And we don´t want to disturb them in their world. So the tourists can visit our country, our lodges. We have very nice lodges. We have got three lodges here in the Balule Reserve for Greenfire. So all these lodges are nice and they can come and see. 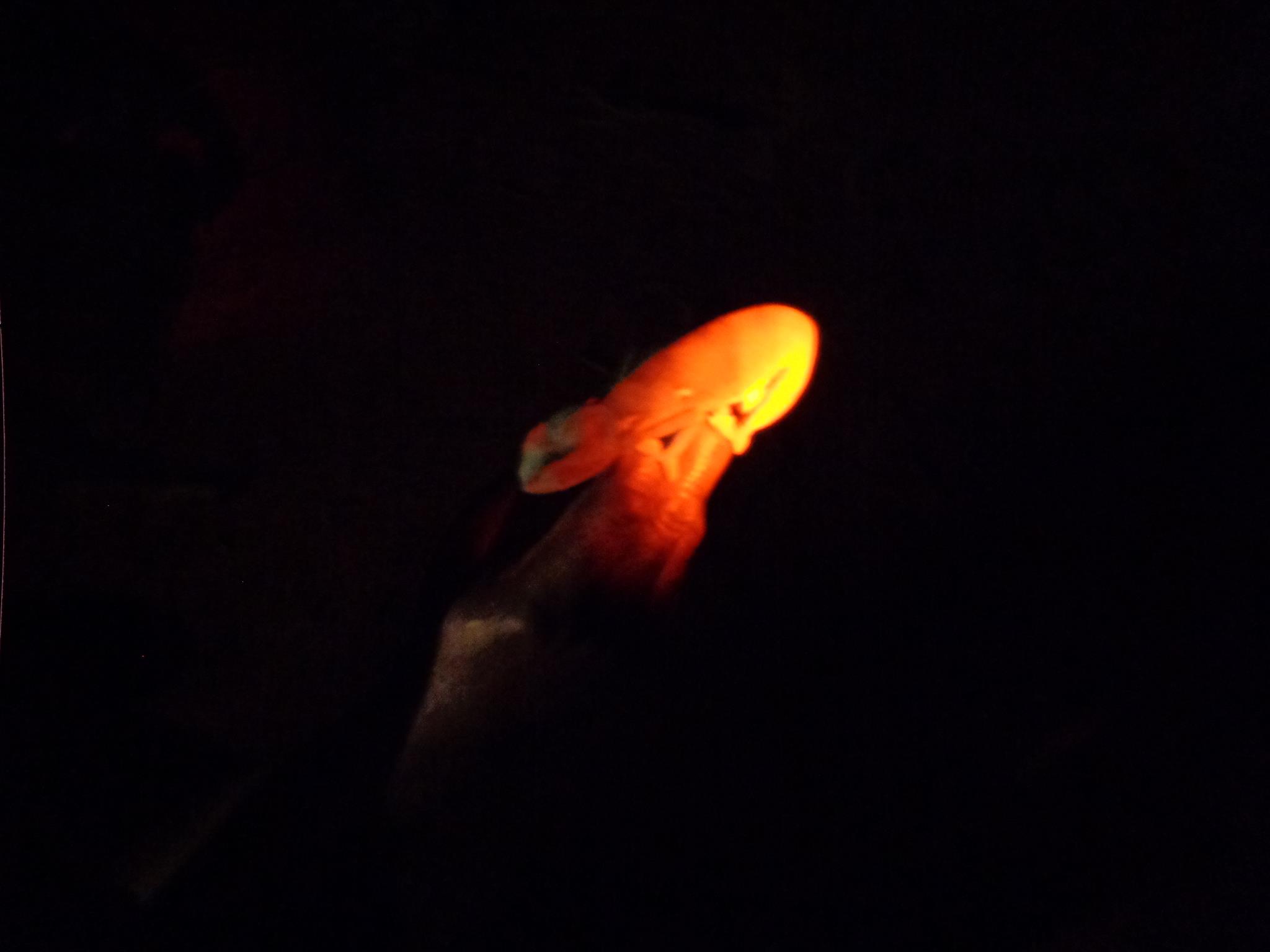