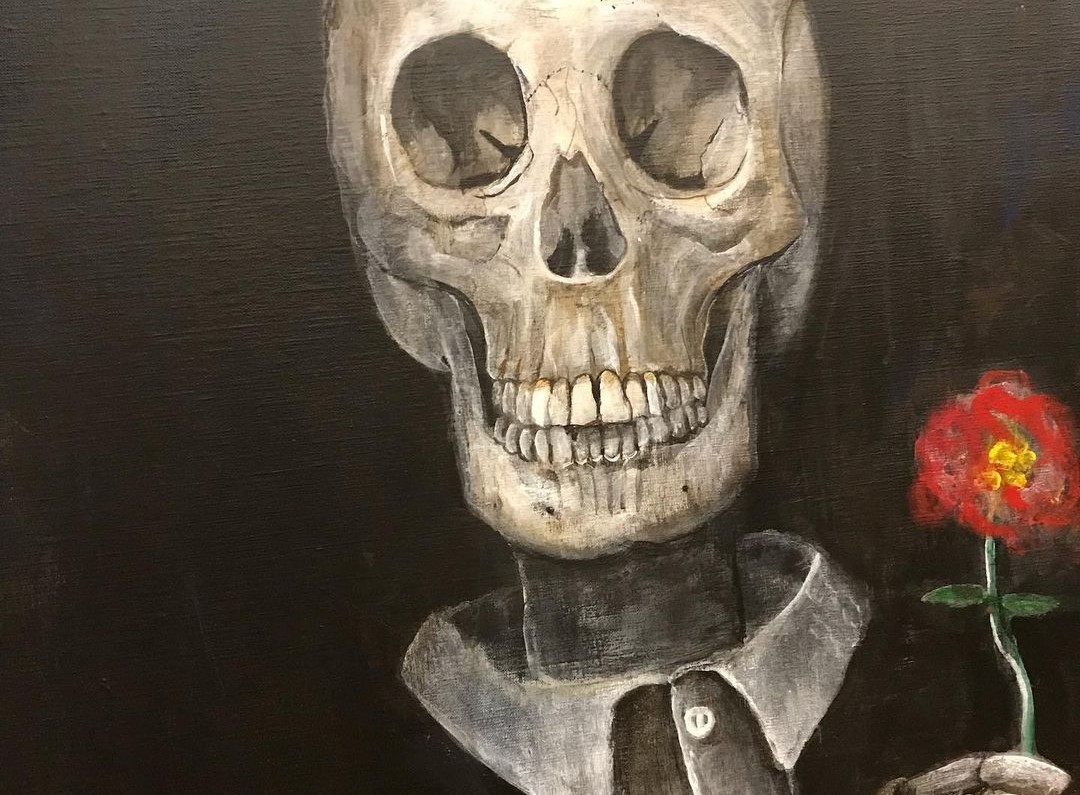 When you look on the fantastic paintings of SKULL ART TAKA you have to think of Alien, Giger and dark apocalyptic worlds. Of monsters that don’t scare you in the end, because they look so damn fascinating. The artist, also called TAKANORI is a master of this design, a visual genius for creatures and he is especially into the skulls. There are numerous other types of themes in the artworks, but the main topic was and is always the skull. 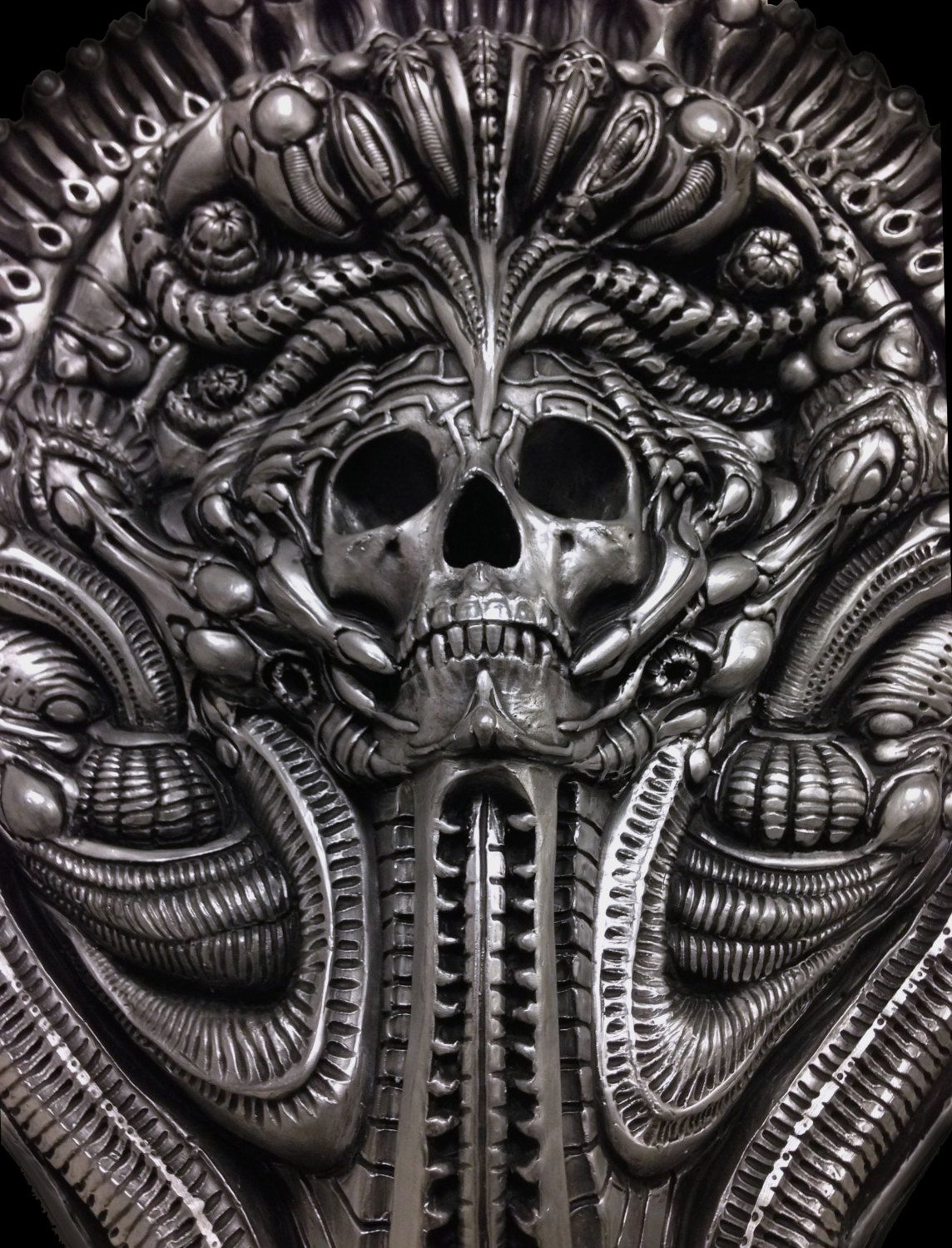 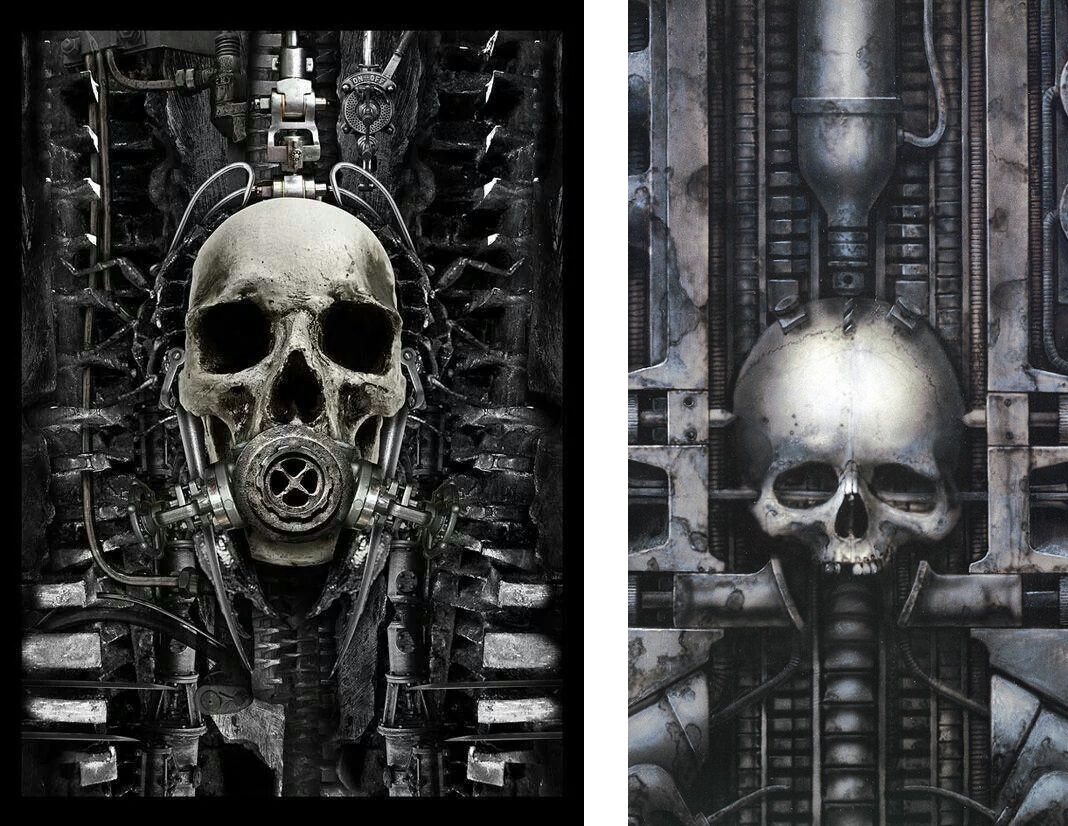 This interview is probably the longest-taken till finished that has ever been conducted on this channel. Altogether we communicated now for nearly two years. So this conversation was not a one go, it happened in many stages over time. But TAKANORI aka SKULL ART TAKA lives on the other side of the world, the language is completely different and the translation programs still aren’t the best either. But we continued to write and interesting analyses developed. 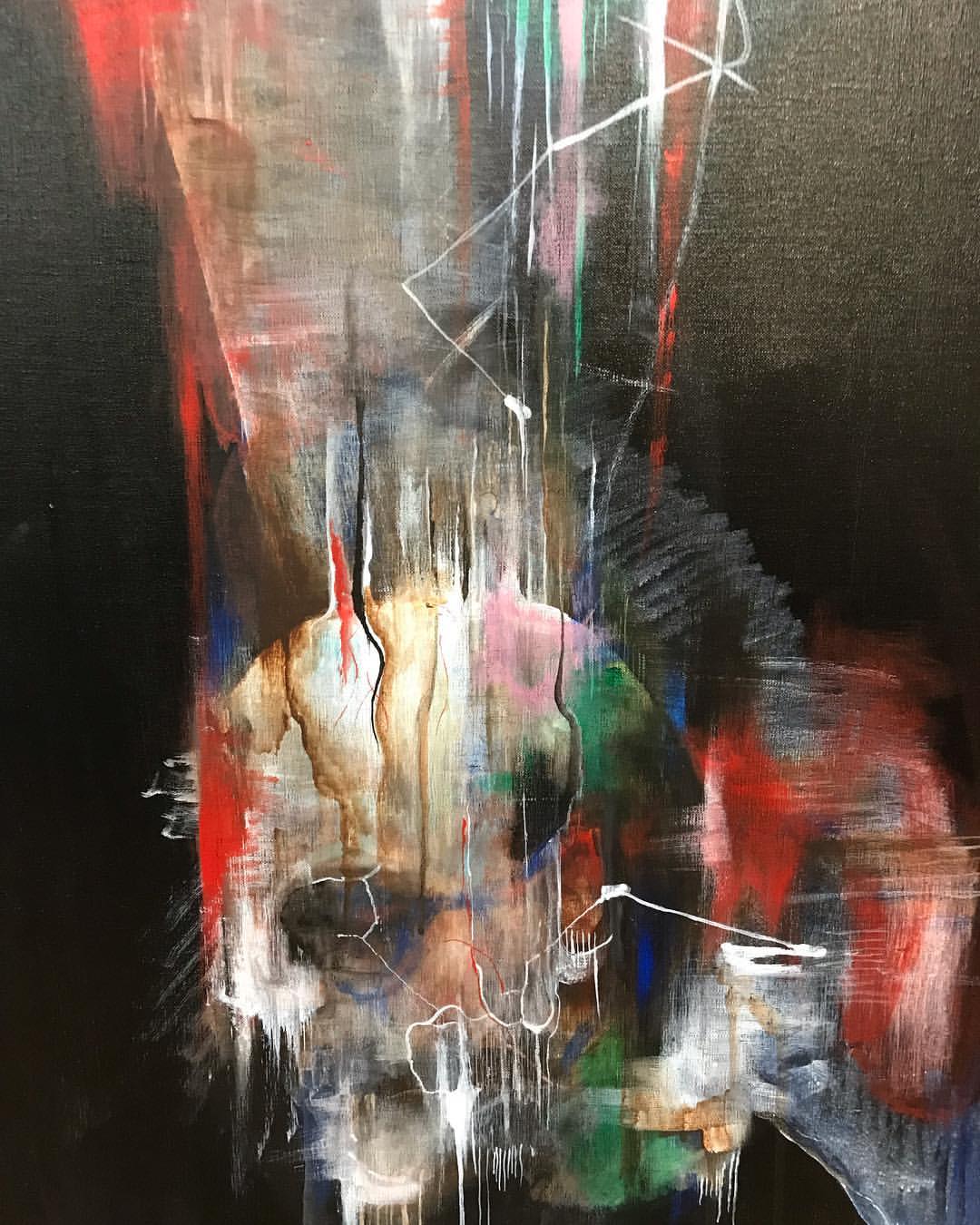 I have tried to describe him how I perserve his art and how it affects me. And yes, of course obviously there are the skulls. But TAKANORI switches between different styles. It’s extremely interesting. The commonality is the skull, but the styles are typically different. In one of our emails I sent him this diagram. It describes my own opinion with a classification very well, that shows the division of his works by style. With the dark parts, but also with the light parts. Refined with structures, colour-flowing or cut off like in a tribal. 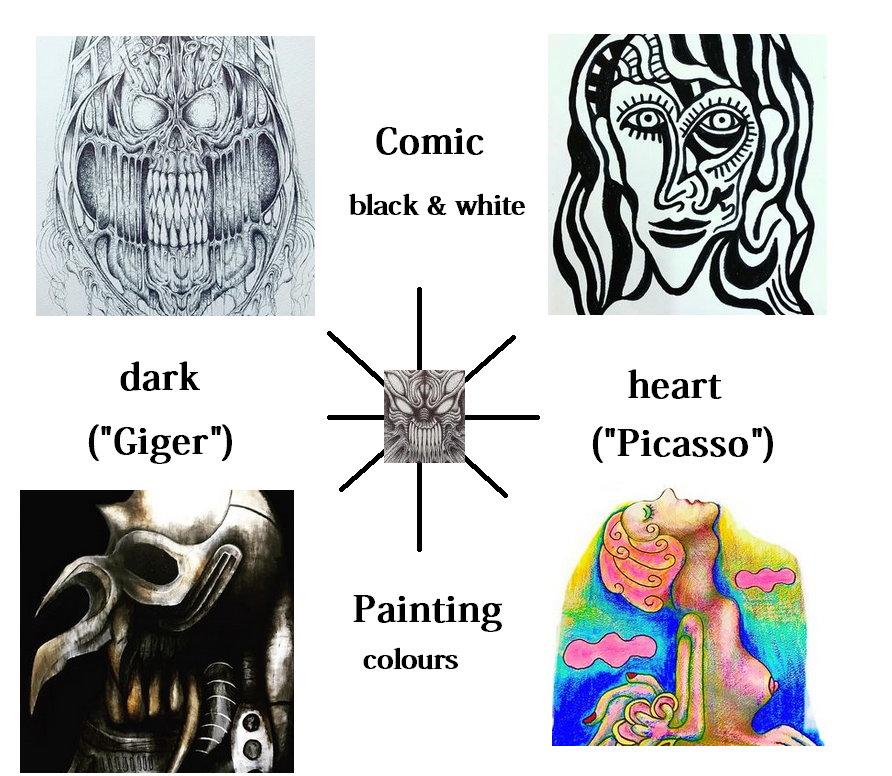 SKULL ART TAKA is just an amazing artist, his creations have fascinated me for years and they should be shown to a bigger audience. Keep on reading, here we have now an interesting interview for you with this fantastic creative mind from Japan. 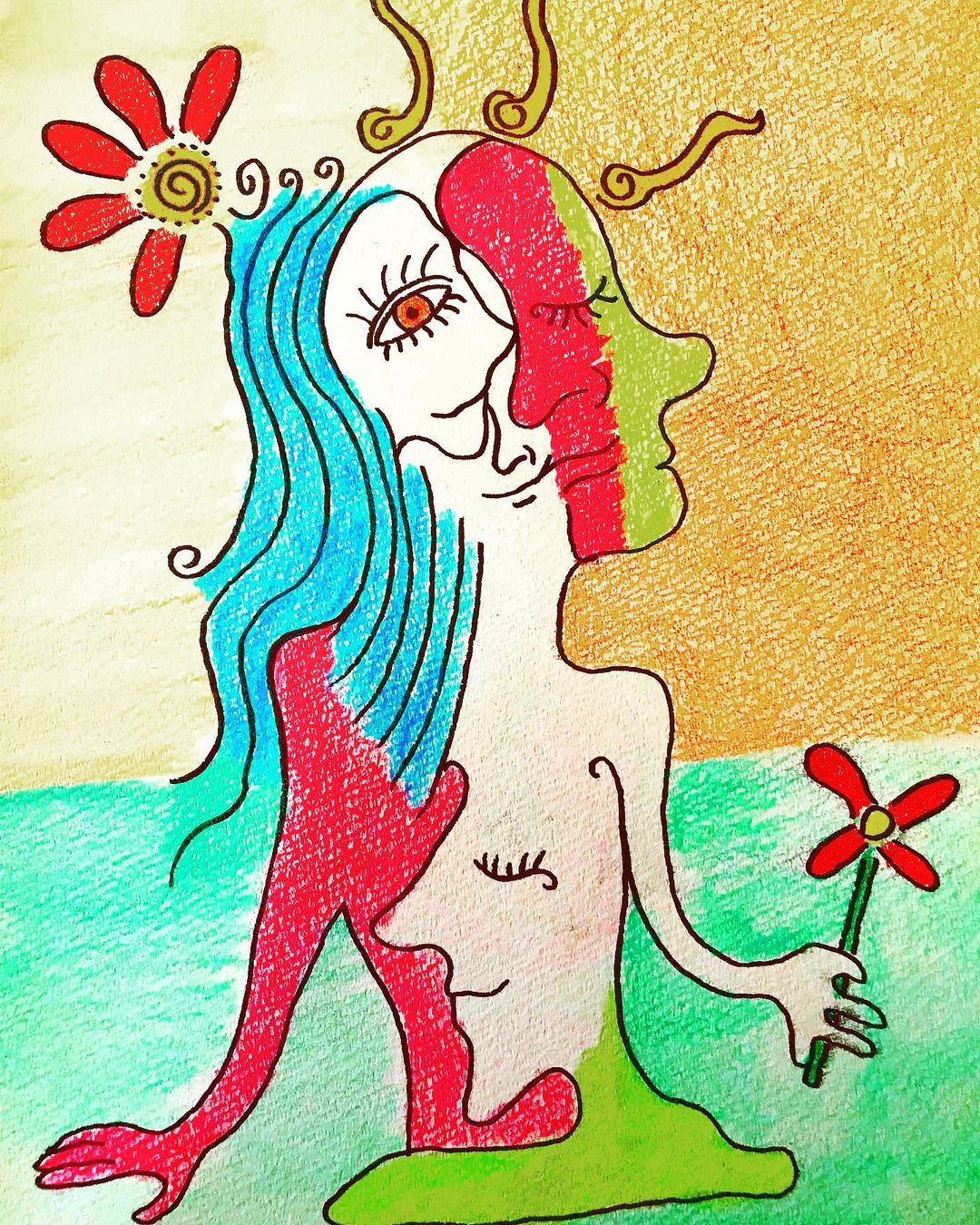 When did you start art and painting? How did you come to this?

I started art since I was a kid and from early childhood. At school I had an art class, but besides that in a park, I was playing in the sand area and thinking about magnificent images., I was playing by making a castle with a waterway and I think that is also art.  I also did painting for the first time in the art class. The picture that I drew with a lot of effort, I remember the teacher trew it away when I playfully drew it. I’m sure it’s a great work if you would look at it now. I came across oil painting when I was 17 years old. Then I started to take the entrance exam for art university. 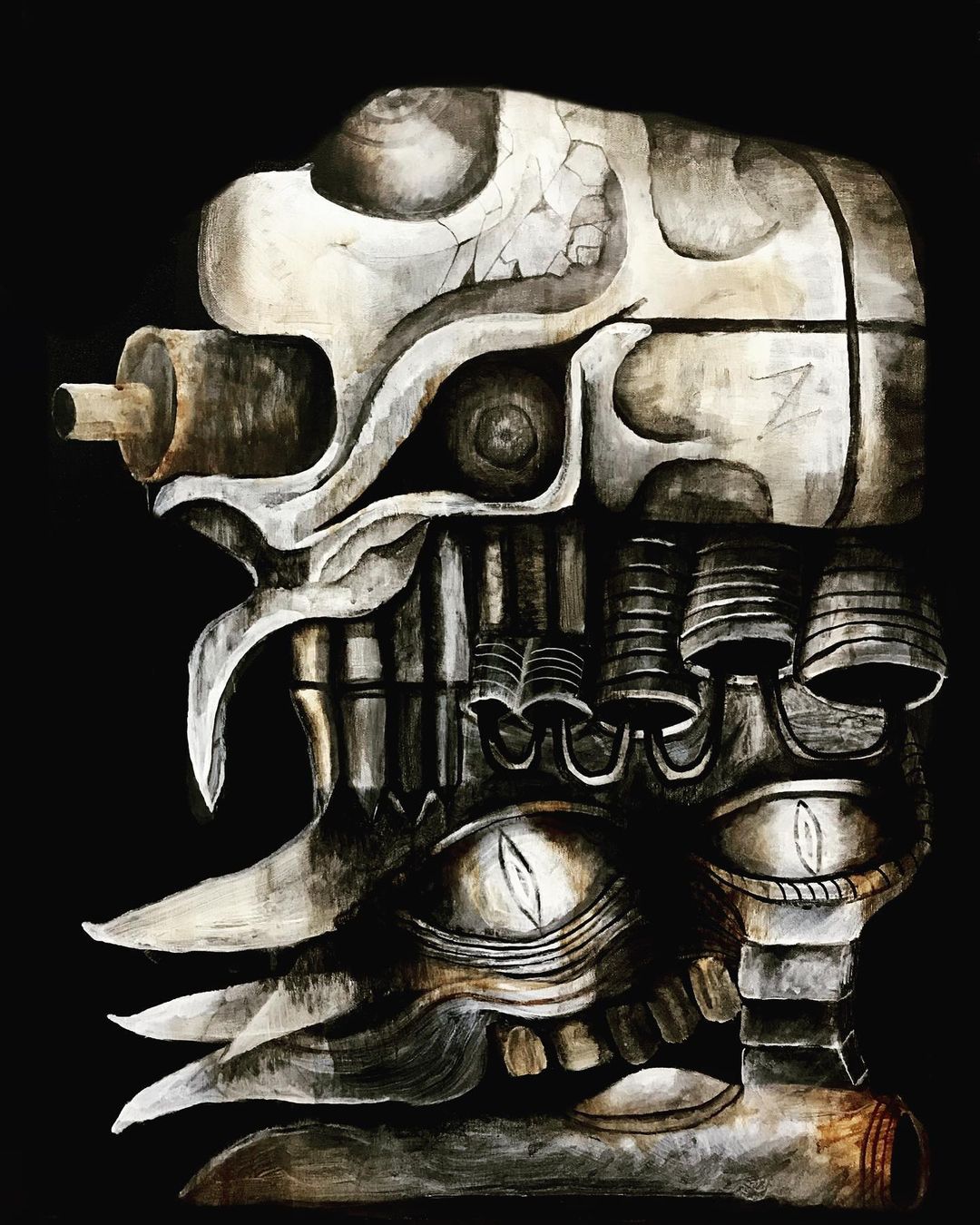 I used to like drawing freely and loved art till now, but I hated to do art by going to school and taking exams. I was drawing that way for the first time  and I had to do pictures with motifs I didn’t wanted to draw. Then my mind became sick and I withdrew from life, so the never-ending story of drugs and alcohol in vicious circles began. And that kind of life lasted for a long time. Finally by starting nursing care work, my values of living changed and drawing every day during work breaks has turned into the joy of drawing. The quality of the paintings improved every day and I have come across a work that I am confident to post on Instagram. And this is who I am now. 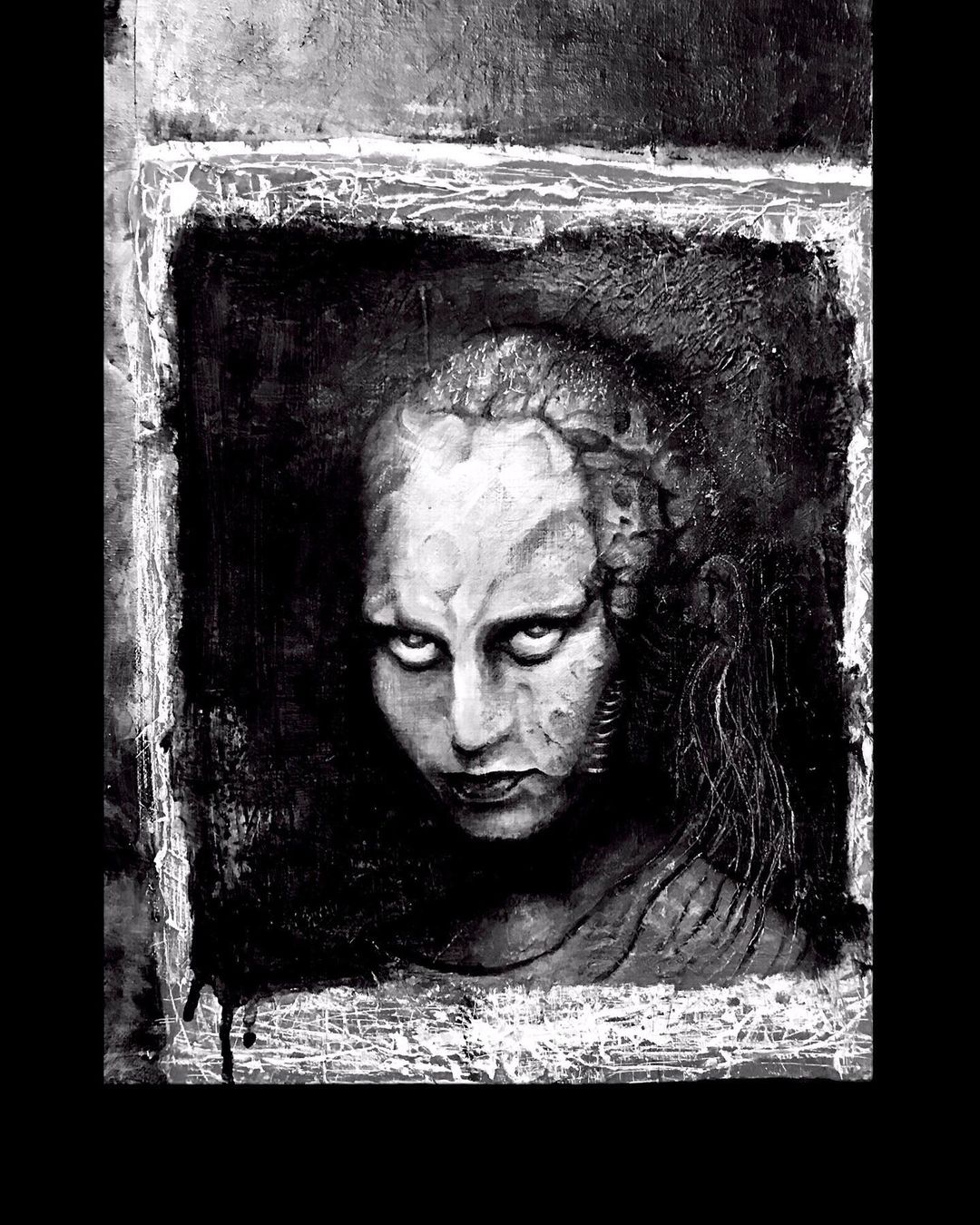 Your motifs are heads or skulls, the name “Skull Art Taka” says it all. Why did you choose these motifs? What do you find fascinating about it? There are a lot of emotions in your pictures. The darkness in people. But you show it in a way that one is intrigued. We all have it in us and we have to process it and to deal with it.

The starting reason for the skull motifs is that I was originally a punk rocker. I grew up with all kinds of hardcore music from overseas. So rock, punk rock, heavy metal or rap. And I still like to listen to the music and follow the development. And there were also these jackets and covers of the CDs, which often had great skulls as motifs ?. When I was a middle school student in Japan, an American friend sent me lots of skull t-shirts from the United States. Since I was a child, the skull has always been a symbol of kindness to me. I then just designed a picture of the skull myself instead of buying a CD or jacket or t-shirt. I had imagined it and designed it myself, but I was still a punk rocker at the time. 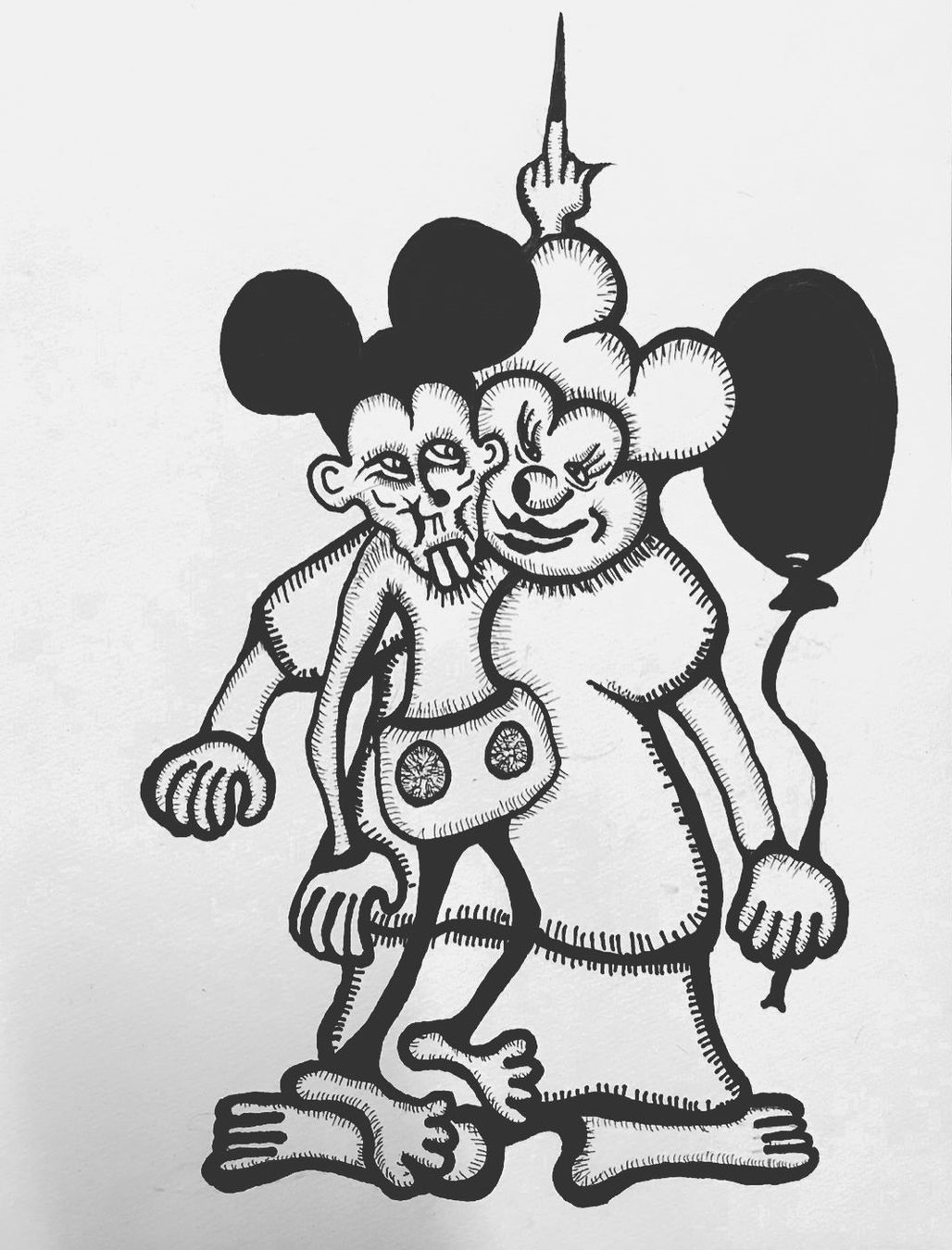 However, as I continued to draw, I encountered myself as a painter, changed my way of expression and found my style of painting which only I could draw. Everyone is sick, especially the people who think that they are not sick. And often if that is the case, then it is sad and they are poor people who have no heart, who think and feel like robots and who have no affection for people. But I am a reflected person and as an artist I can unconsciously express my darkness in my work. And in the end, the punk rocker in me always struggled and was stronger! But still, as a punk rocker, I always felt enormous anger at the world, at others and also at myself. 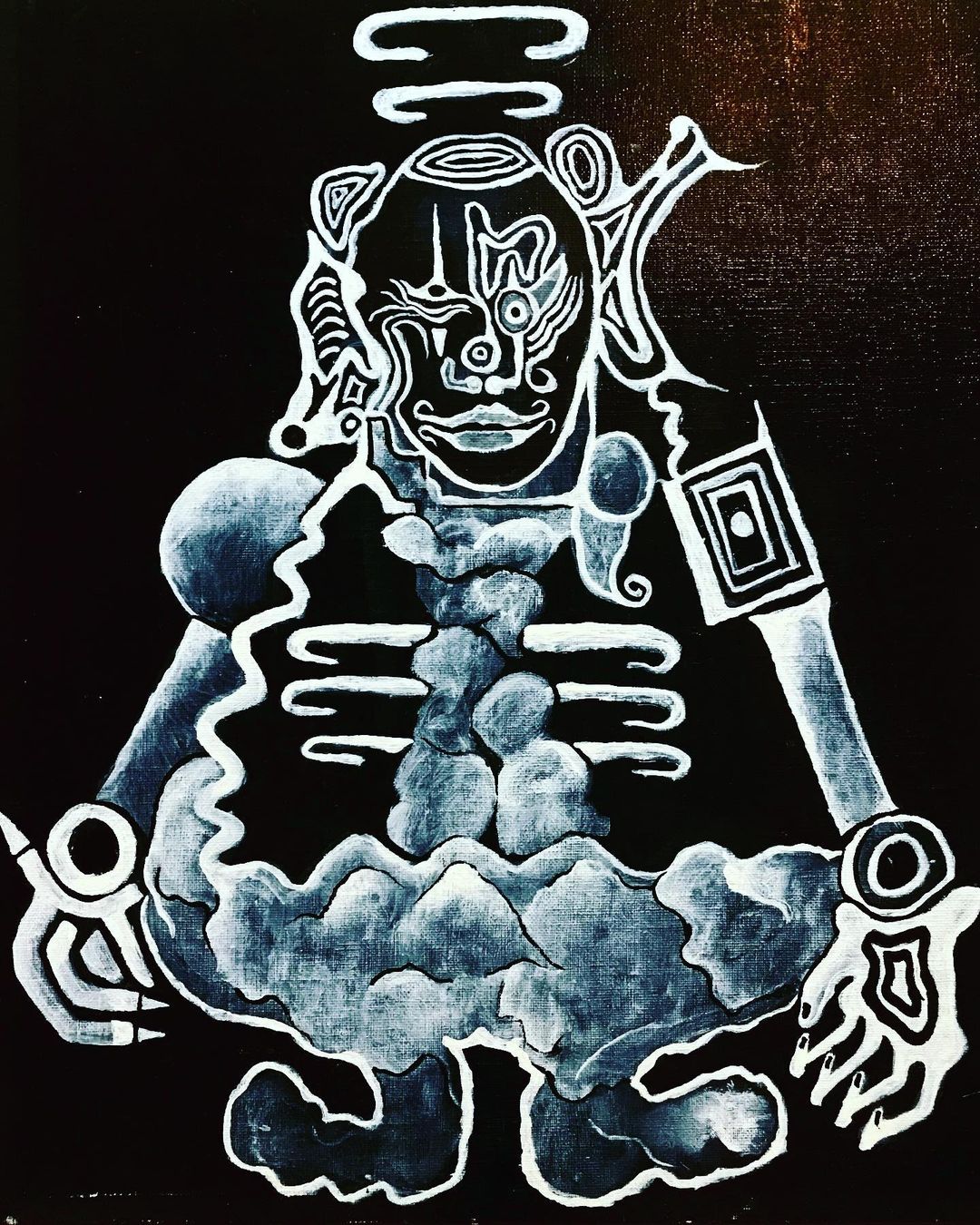 I can control anger and other emotions, some of my paintings portray human anger with an illustrated emblem. I designed the motifs because I wanted to draw a cool picture. A cool picture of human anger! It was great then to see my picture and say it’s cool! I drew an image of human extreme anger. Anger is the source of energy that produces the strongest power for humans, so I expressed the strongest energy in the skull picture. 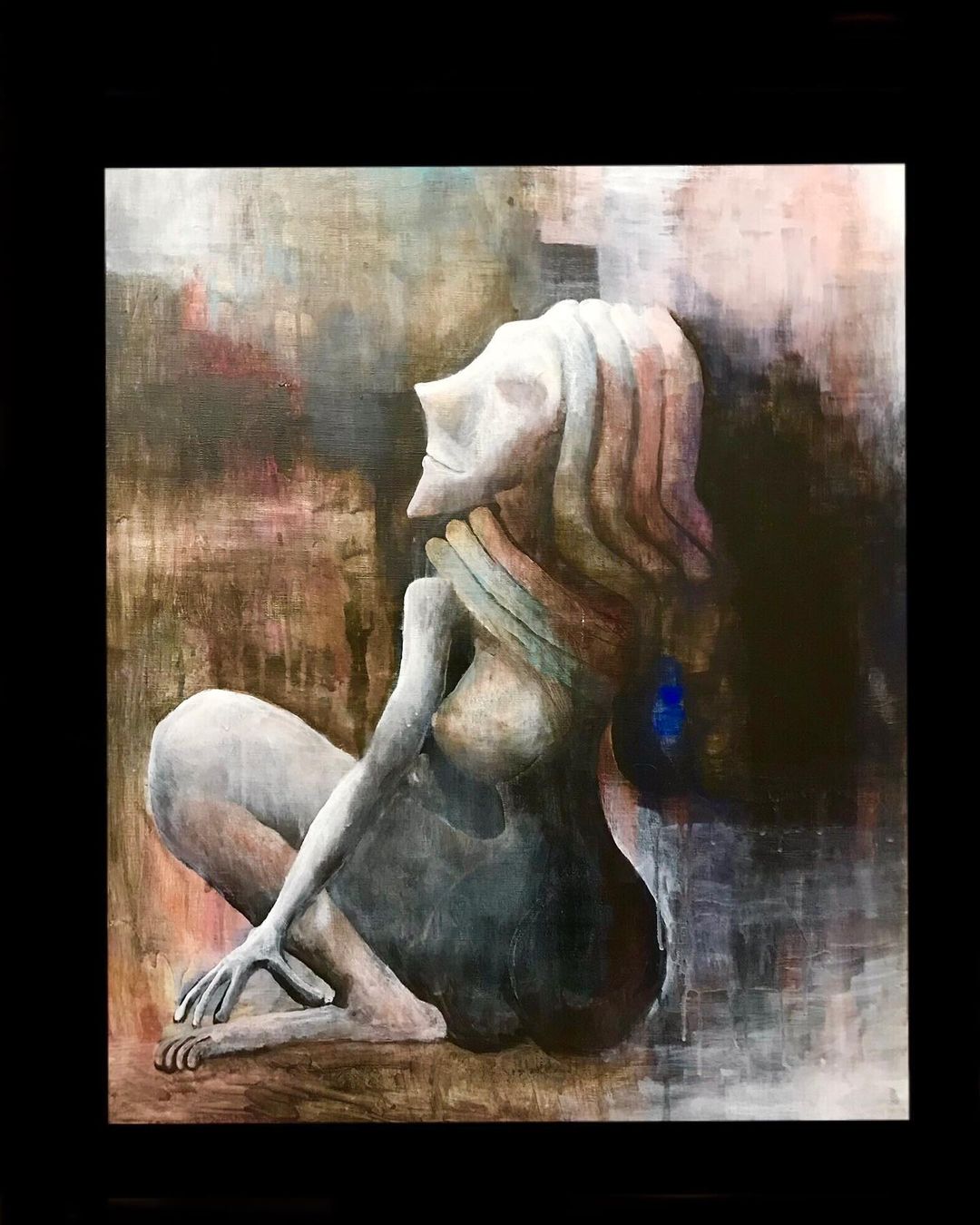 Describe us which instruments you use to create your works of art. Are you doing this with a brush, a pen or other instruments?

The only tool I use to draw pictures is the ink pen. Depending on the type of picture, I may draw with only an oil-based ink pen, sometimes with a water-based pen, and sometimes with both oil-based and water-based pens.  Either way, I don’t draft at all because the first draft is a tedious task of trying to get closer to the finished ideal picture, drawing lines to avoid failure or even drawing lines that failed. Even if I do, I’m still approaching the completion of my ideal, and I enjoy painting and my bargaining. 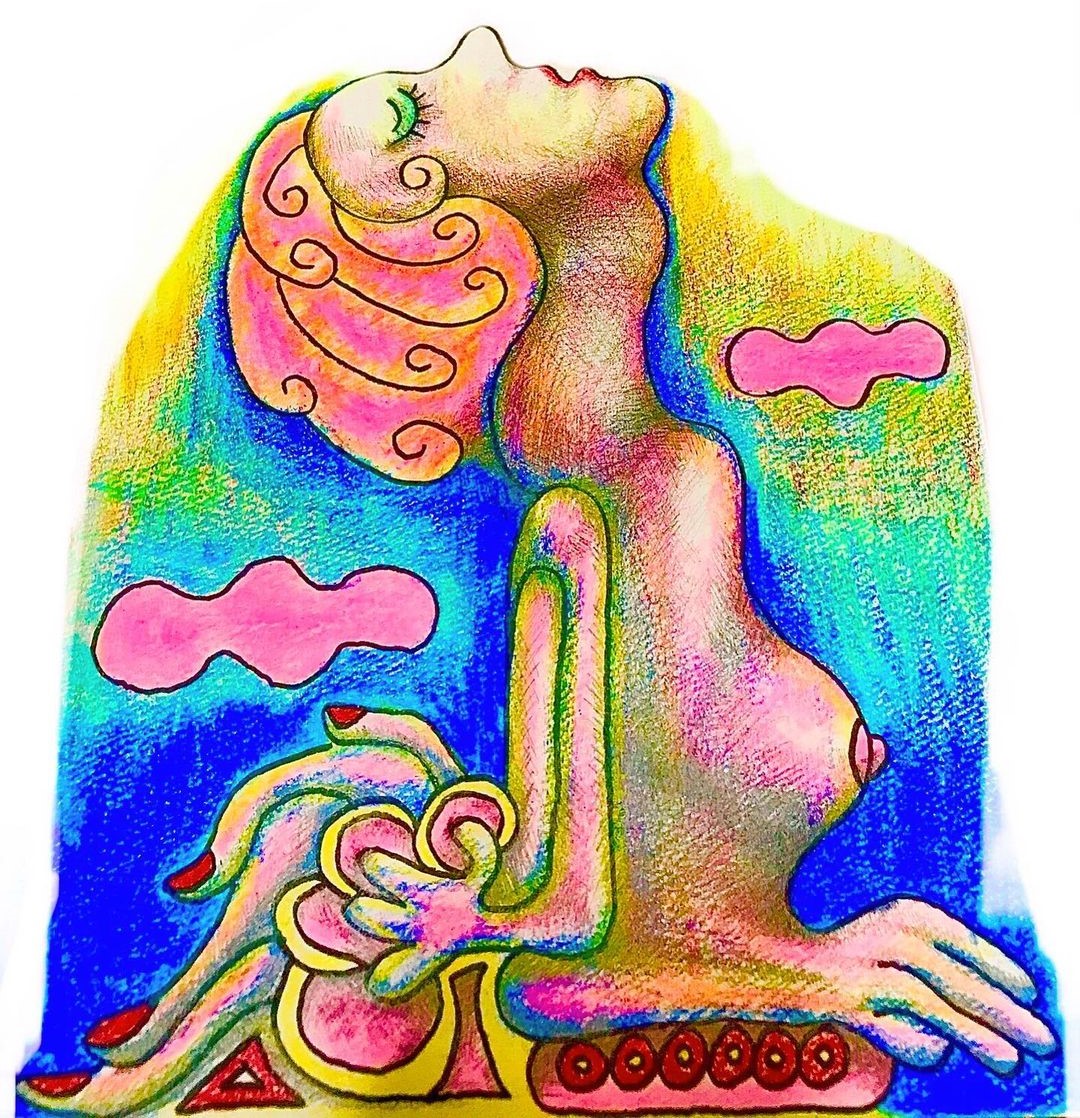 Some of the submitted works were painted with acrylic paint or oil paint, but only the works I drew more than 10 years ago.  Right now I’m only thinking about drawing black and white works with an ink pen, and I think I’m still immature as an artist who draws pictures with an ink pen. 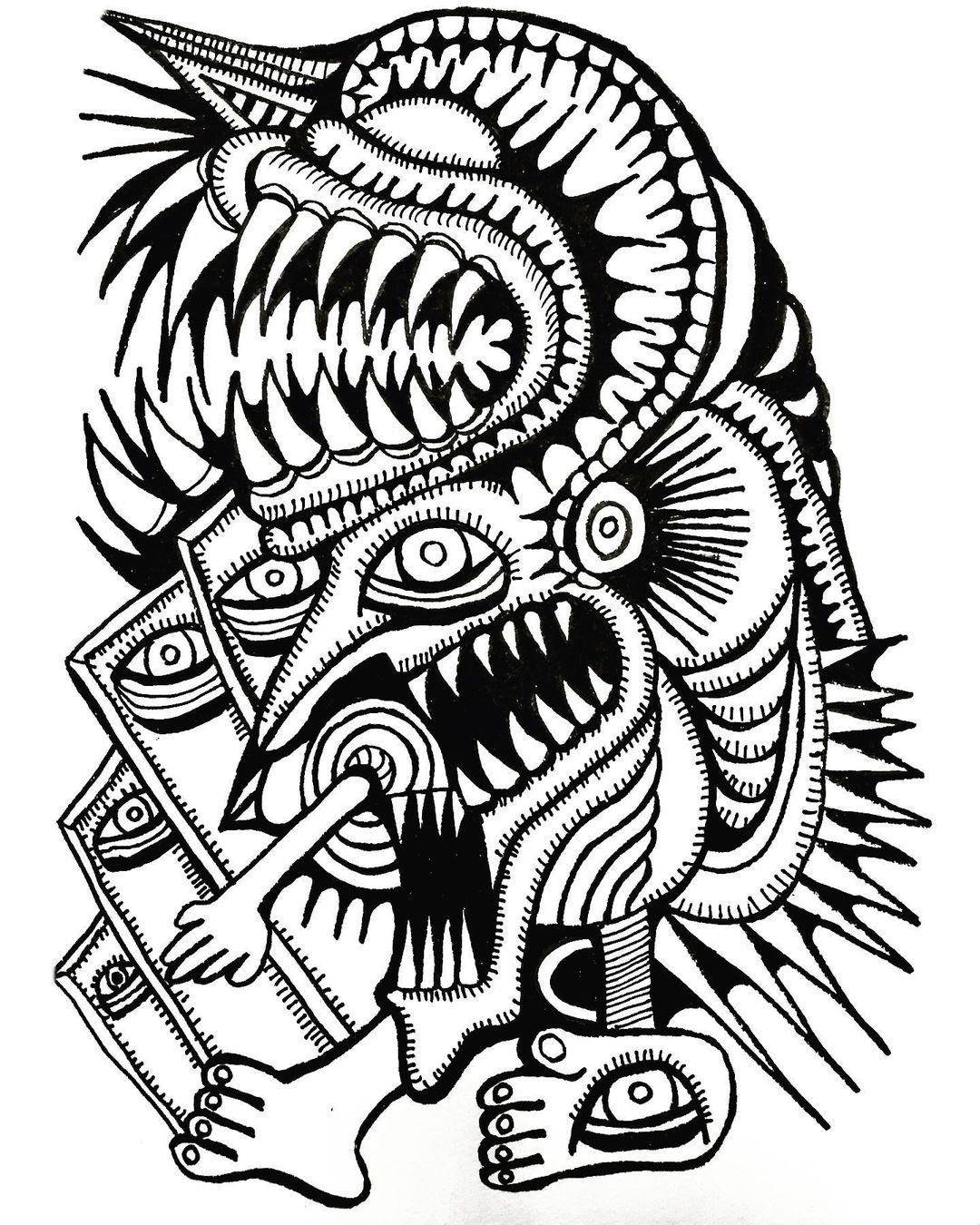 To be honest, I’m not thinking about painting. I just enjoy drawing, As well I don’t have a favorite painter, ok, this is not true, but I will explain later. But I’ve enjoyed drawing since I was a kid, and I’ve been drawing until now. Of course, drawing was a hassle, and there were many times when I didn’t. In my works now mostly I don’t use color. Because it’s annoying me. 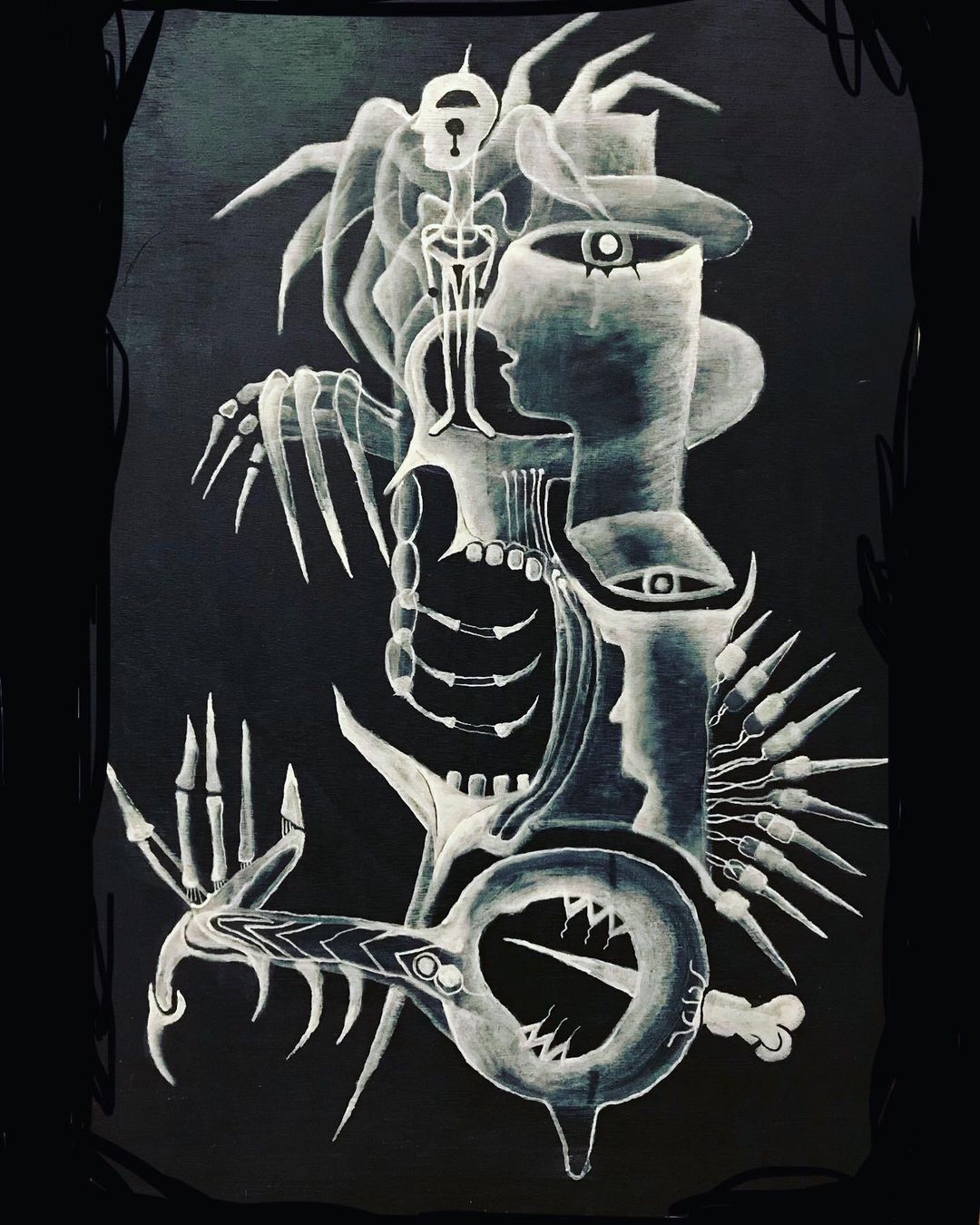 Drawing a picture on white paper with an ink pen is the easiest, cheapest and most stress-free way for me. It is on paper, but yes, it is a kind of graffiti. And it could be also painted anywhere. However, I now think that it is my style as a painter that I have been painting for many years. 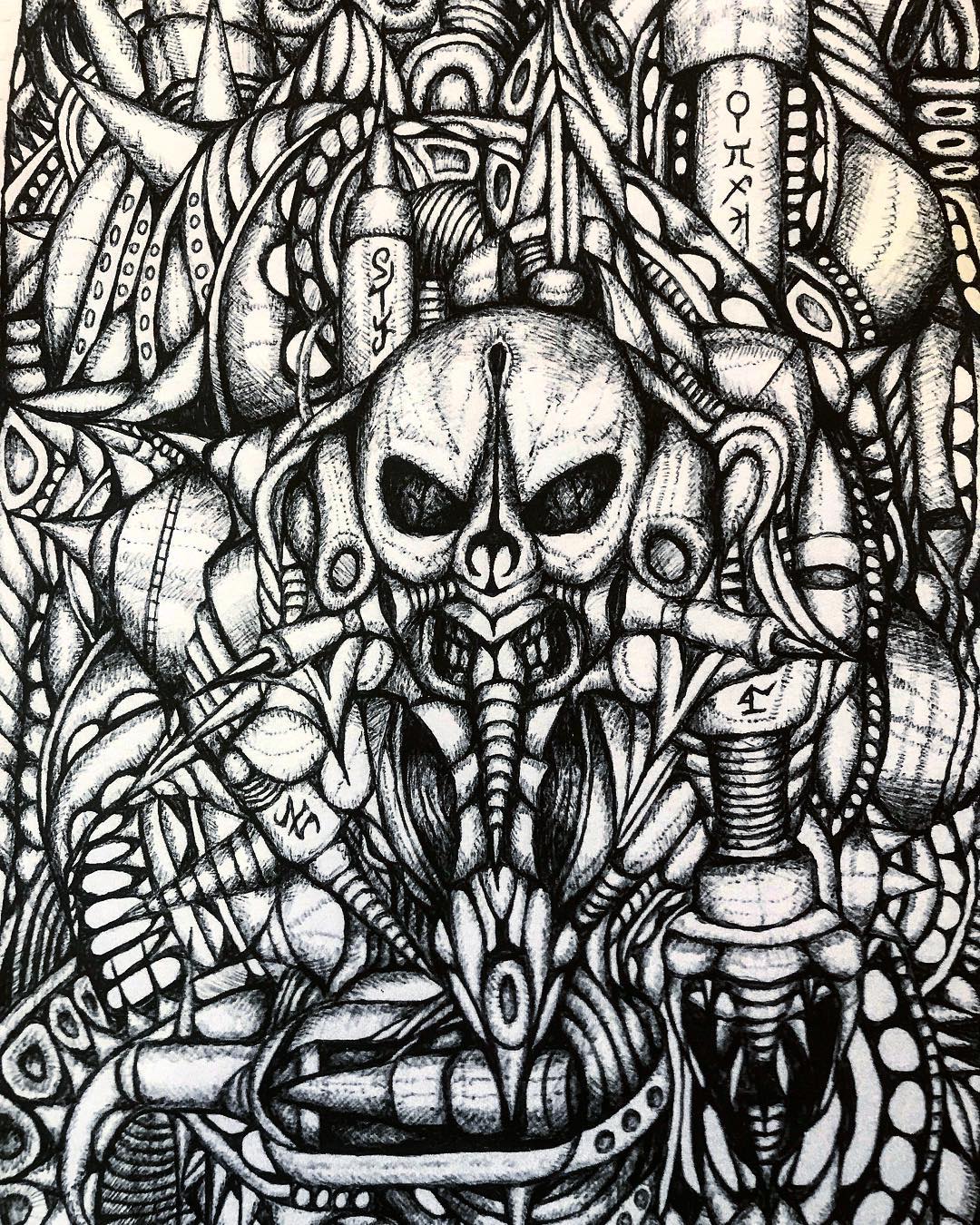 As for Japanese manga, when I was a kid, I liked to read a lot of violent manga, but now I’m not interested in manga at all anymore. I don’t even know what kind ofmanga is popular in the comics and books today. Although I know it is my prejudice, I think that manga and anime are read by children. From overseas, I think many people feel that it is a novel entertainment, but I am not interested in it at all. 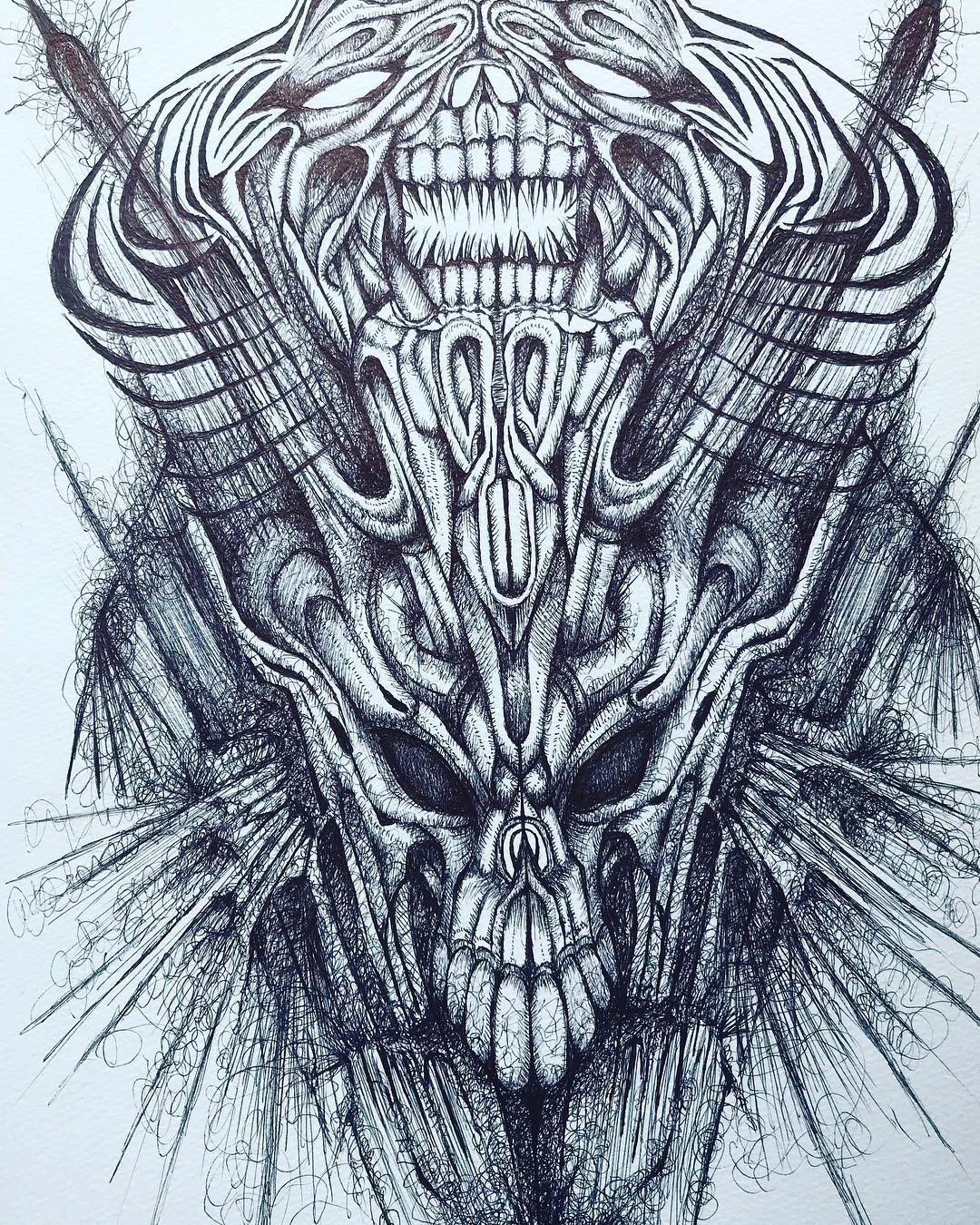 Are there certain painters who influenced you or still do?

About the Giger thing. When I was a kid, I watched the movie Alien and it was cool! I longed for a soldier fighting aliens. It is true that I bought a thick Giger book, but most of the paintings were in beautiful colors and had a nice contrast between black and white. I was disgusted by the blatant expression of the reproductive organs of various creatures. 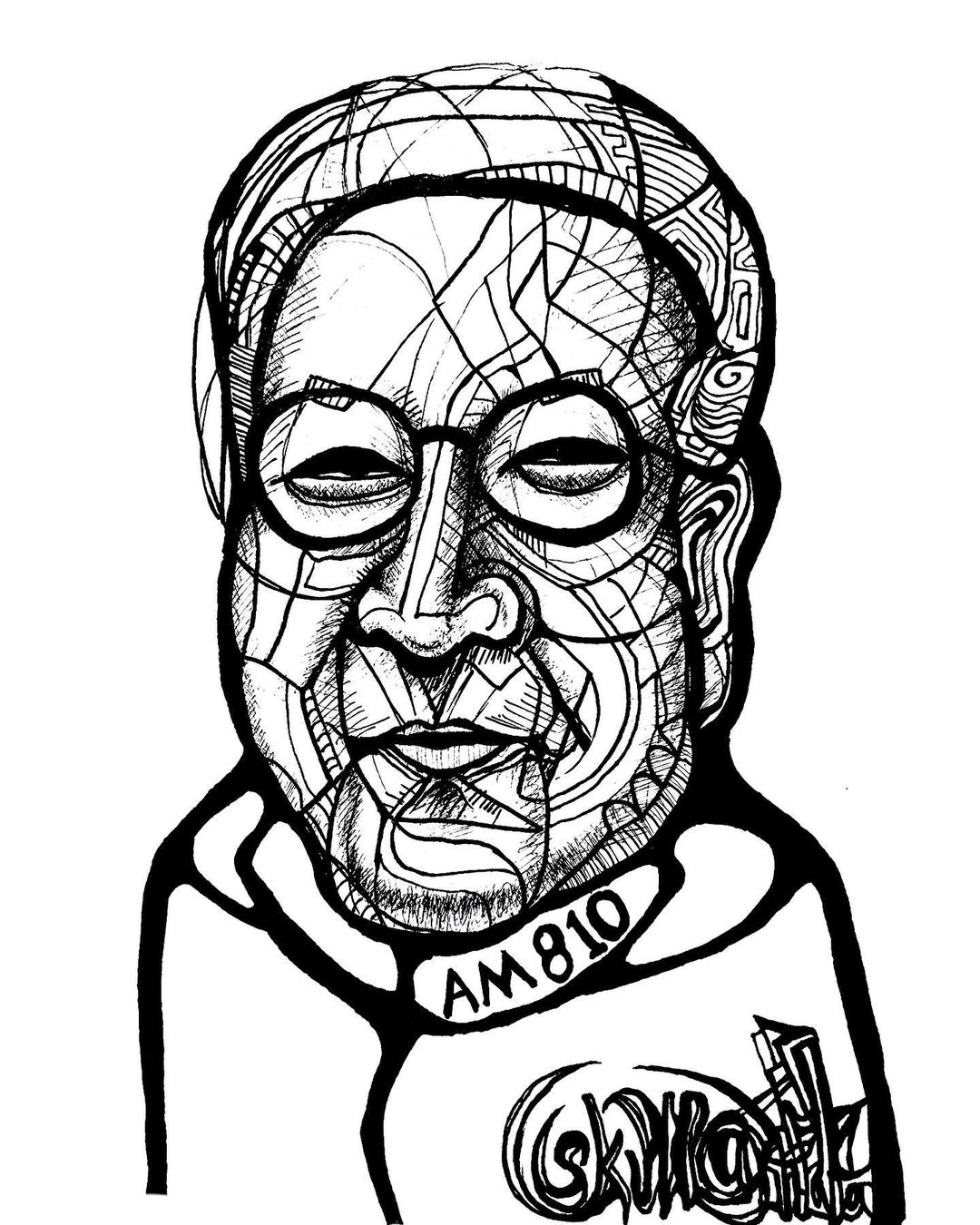 Picasso is wonderful, I have no interest in museums at all, but once I saw a Picasso painting in an art museum, the coloring was strong and made me nauseous. I don’t go to art museums at all, but there’s a painter I was very moved by, Van Gogh. When I saw his work, I was moved by the painting for the first time. Even though it was a two-dimensional painting, I felt as if I was actually there in a 3D world. 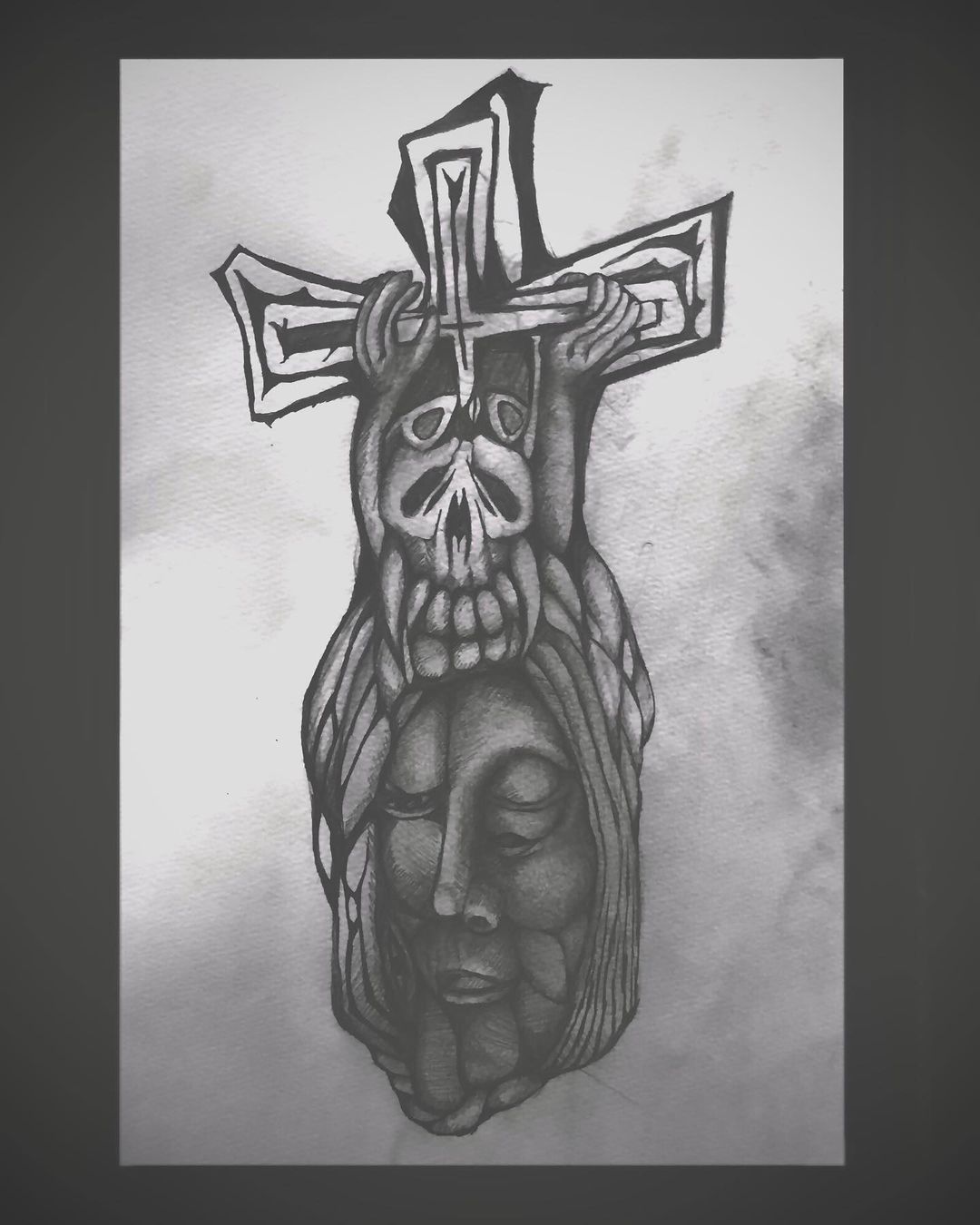 “I am aiming to create a picture of a new world view every day.” 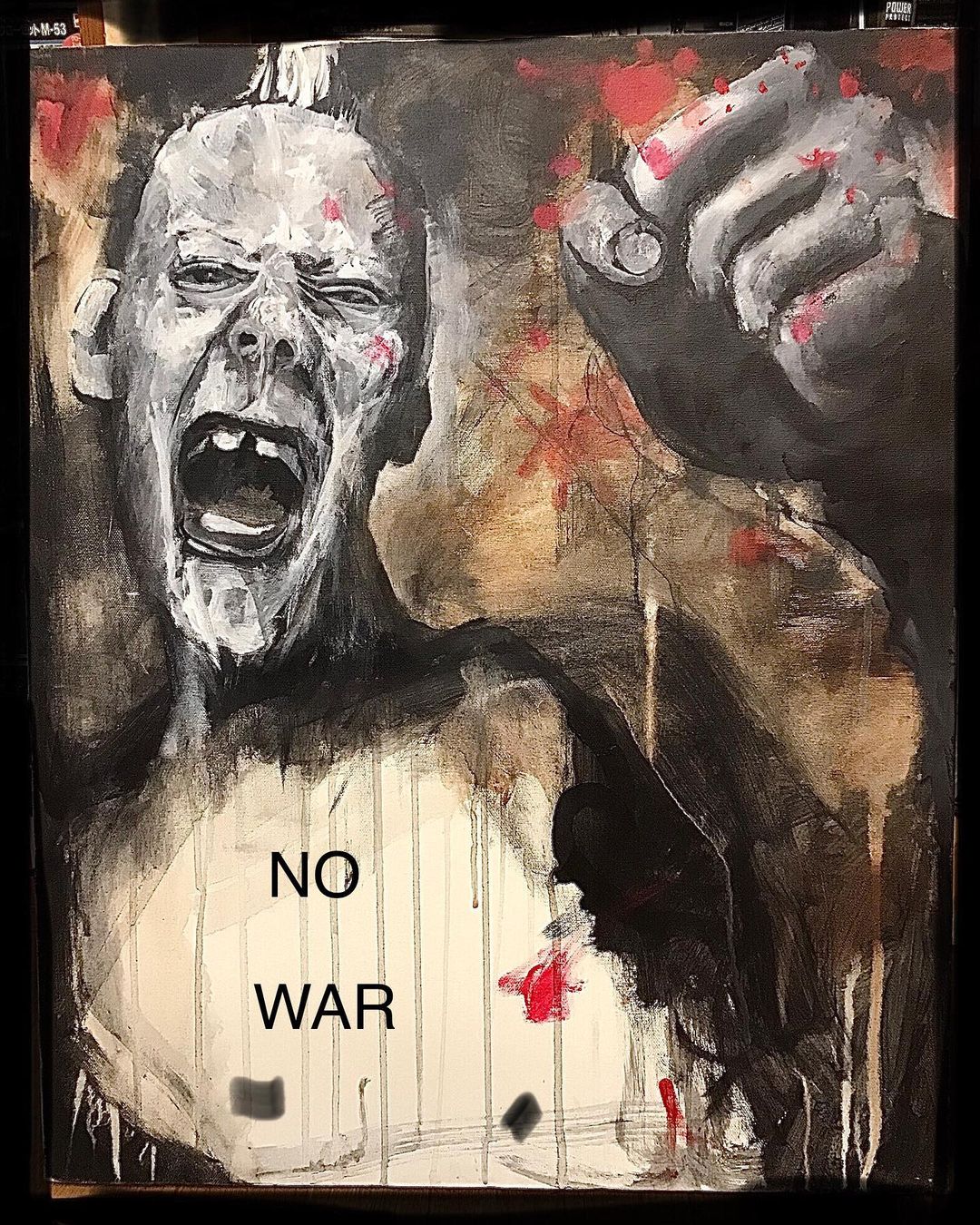