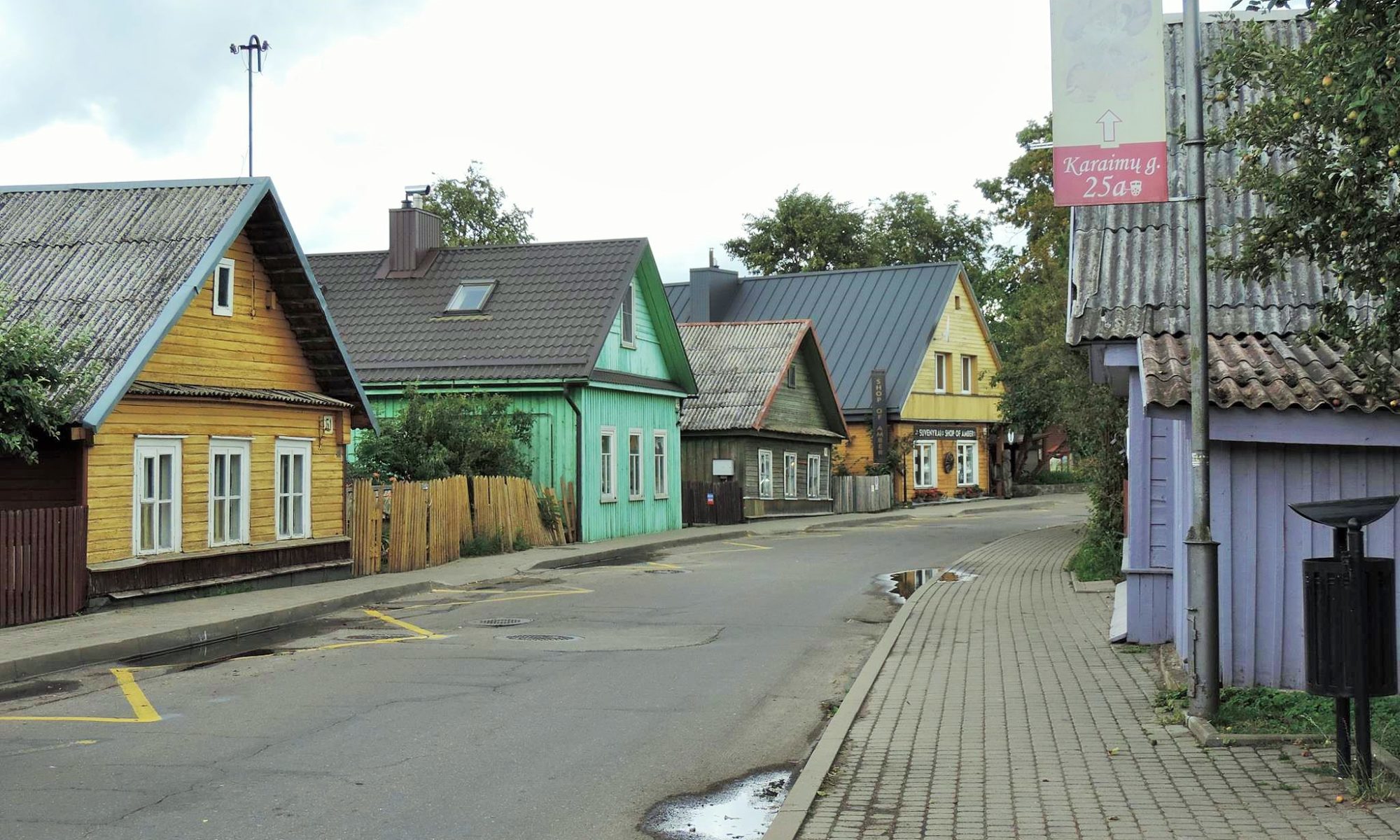 Trakai is a town and seat, but not the largest town of the Rajon municipality of Trakai in Lithuania. The city has (2018) 4,298 inhabitants and an area of 11. 52 km². It´s located 28 kilometers west of Vilnius, the Lithuanian capital and a nice travel spot. There are 200 lakes in the area and the place is famous for its old water castle Trakai on an island between the Galvesee, the Lukasee and the Totoriskessee. The Galvesee with its 21 islands is with 46,7 m the deepest lake of the region. Its area is 3. 88 km².

Today in Trakai there live in the town ethnic Poles as well Russians, Belarusians, Caraeans and Tatars. The population has decreased by about 2500 persons since the independence of the country. Trakai is home to about 65 of the 257 Caraeans (or Karaimens) counted in Lithuania. Trakai is the cultural and religious centre of the Jewish Karaimen movement, and older inhabitants in particular speak the Karaim language (Turkic language) in the local Northwest Karaim dialect variant. This dialect was mainly formed by adapting to the languages of the surrounding languages, namely by a very pronounced adoption of pronunciation idiosyncrasies, words and grammatical structures from Lithuanian, Polish and then Russian. There has also been an unclear influence through contacts with Eastern Yiddish.

Old Trakai was in the Middle Ages from 1316 to 1323, for seven years the capital of the Grand Duchy of Lithuania. According to legend, Gediminas was hunting, found a beautiful hill in the forest and moved the capital of Kernave here. Trakai was mentioned in a document in 1337.The 13th and 14th centuries are marked by fights against the crusaders of the Teutonic Order. During the second half of the 14th century a stone castle was built in Alt-Trakai, the temporary residence of the Grand Duke. At the end of the 14th century the castle was destroyed and not rebuilt. In the second half of the 19th century, a neo-Gothic church was built in its place. Near them the remains of a Benedictine monastery can be seen. There was the district Traken in the voivodship Traken Grand Duchy of Lithuania. New Trakai, today’s town of Trakai, is three kilometres away from the castle complex of Alt-Trakai. The town of Trakai could not expand after the Middle Ages due to its location between the lakes.

The area of the old town is 169 ha and is one of five old towns in Lithuania under state protection. The city is worth seeing for its unique geographical location and wooden architecture. The city structure is exceptional and beautiful. In summer linear because the city stretches along the lake and in winter radial when the frozen lakes can be used as paths. The main road crosses the whole peninsula on which the city is situated. The former market square is marked by a chapel column with a sculpture of St. John Nepomuk. Nepomuk is the patron saint of fishermen and towns by the water from the 18th century. Next to the market place you can see a blue house, which is the building of the old post office. It was built by Dominicans. Today it serves the administration of the Historical National Park of Trakai.

The Dominican monastery was closed at the end of the 19th century. After that, the building survived many transformations from monastery to KGB branch. Today it houses the administration of the Trakai Historical Museum.Not far from the hill stands the Basilica of the Visitation of the Virgin Mary. In 1409 it was founded by Vytautas the Great as a parish church. It used to be a part of the protection system of the Traka town. It was built in the Gothic style. The church was rebuilt in the 17th and 18th centuries. The façade and the interior decoration have Gothic and Baroque features. She is known by the picture of the Mother of God of Trakai. At the beginning of the 18th century, the Virgin depicted in the picture was crowned patron saint of Lithuania with a golden crown donated by the Pope. In 2017 she became Basilika minor.

On the northern side of the town a quarter with wooden houses has been preserved. It is one of the most important historical elements of Trakai. The Karäerstraße is the continuation of the Vytautas-Straße, which connects the Christian with the so-called “Small Town”. The small town was inhabited by Tatars and Carians. The karaitic Kenessa dates back to the 18th century. As an ethnographic monument, the quarter of one-storey wooden houses is under the protection of the state. The houses face the street with the gable and have three windows: one window is dedicated to God, the second to Vytautas, the third to oneself.