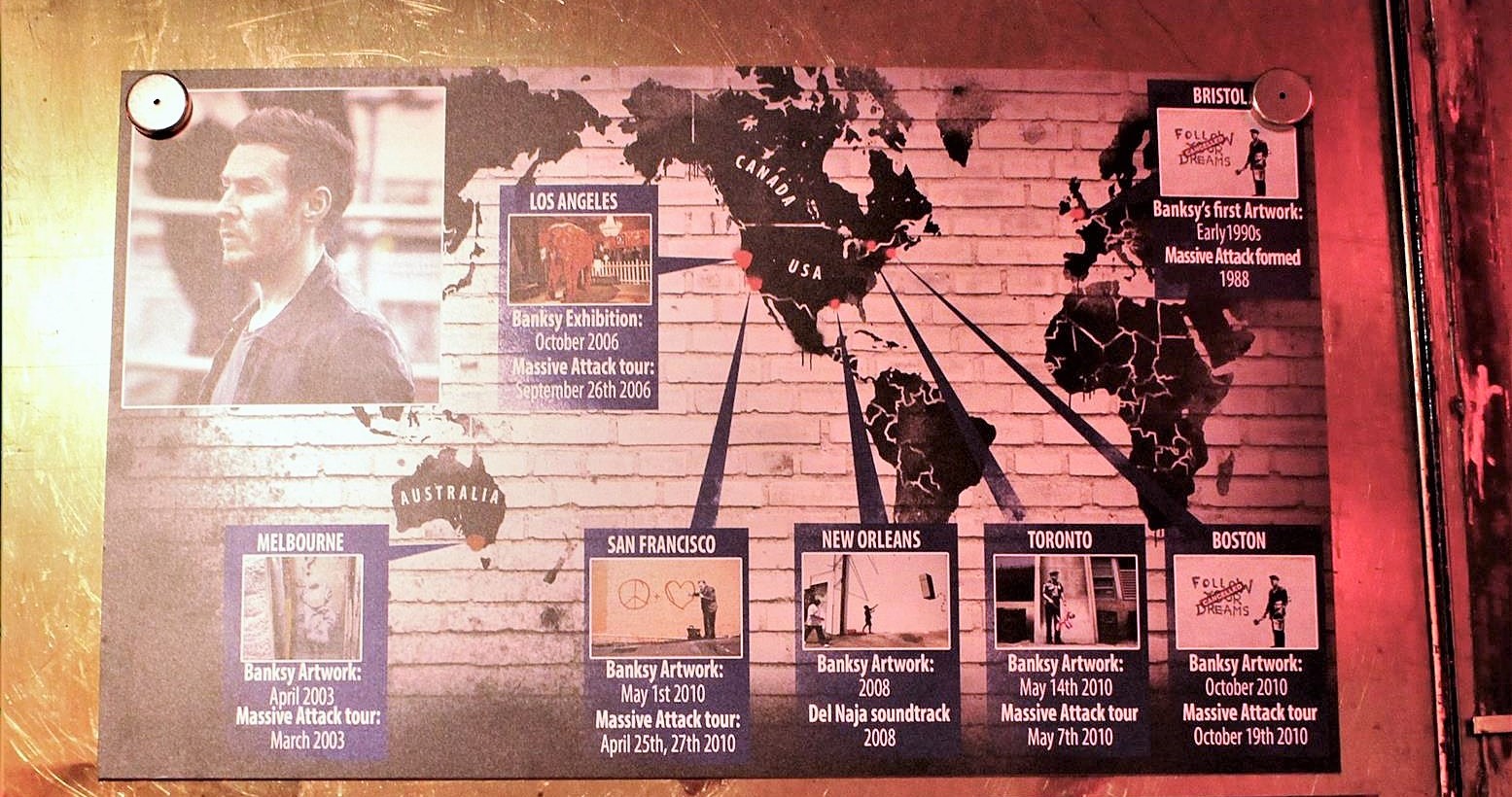 BANKSY and his identity

Banksy’s true identity remains secret today, although a 2008 study conducted by the Mail on Sunday using technologies used by the police to search for criminals, matched the artist’s identity with that of Robin Gunningham. Some identify the graffiti artist with Robert Del Naja of Massive Attack, others with a collective of artists, also directed by Del Naja. There is also another hypothesis which he believes may be the English artist Damien Hirst. 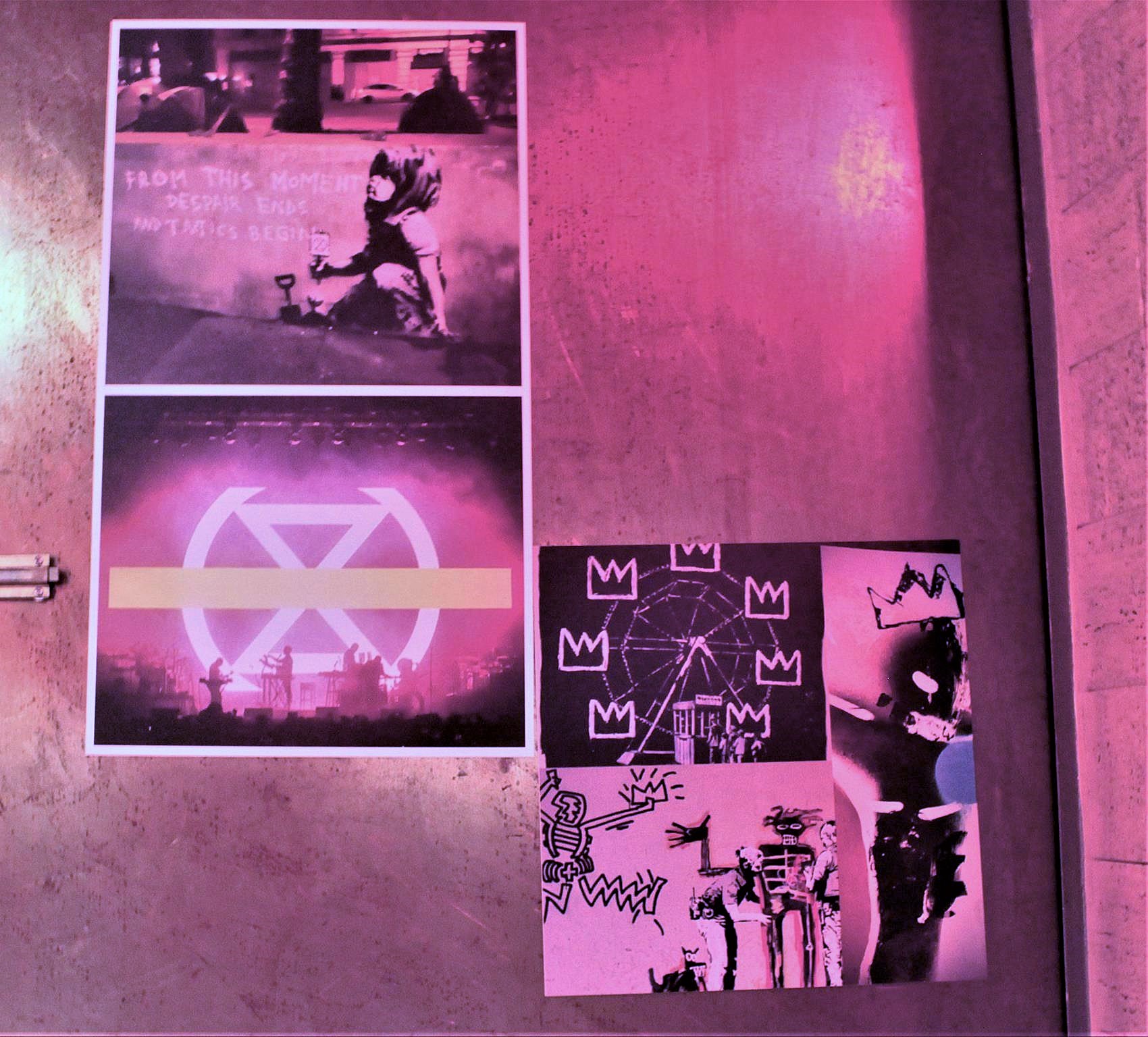 Below is a list of the reasons that make the hypothesis of finding ourselves in the presence of a collective of artists, founded and coordinated by Robert Del Naja (3D) more credible.

1) Robert Del Naja, musician and founder of Massive Attack, is from Bristol (1965). Banksy’s work was officially born in the underground scene of the English city that developed on both banks of the River Avon.

2) They are both street artists, they have different styles and, for this reason, Del Naja would have chosen to opt for a different tag by exploring new themes and new solutions.

4) Massive Attack are very active from a cultural and political point of view, as is Banksy.

5) Before the permanent intervention in Venice, Banksy’s only work in Italy was in Naples. Today “The Madonna with the Gun” in Piazza Girolamini is protected by a reliquary. Robert Del Naja has never hidden that he is ‘Neapolitan’, as evidenced by photos and interviews.

7) They both love the art and works of J. Michelle Basquiat.

8) There is a link between Massive Attack’s live dates and the cities where Banksy’s work appears.

12) The flame tattooed on Del Naja’s arm, and also the cover of the album “Blu lines” by Massive Attack, is very similar to the one inside the fireplace of the hotel in Palestine, the “Walled off Hotel” built by Banksy.

13) Steve Lazaridies was the gallery owner of both.

14) The Rebellion Earth movement website appears on Robert Del Naja’s Instagram profile. In one of the graffiti that appeared in London and attributed to Banksy, there is the logo (in the girl’s hand) of the same movement very active on the issue of climate change. The same logo appears projected in one of the Massive Attack concerts.

15) On one occasion the DJ Goldie (friend of Del Naja and Banksy) spoke of the street artist calling him ‘Robert’.

16) One of Banksy’s first performances was at the Arches nightclub now closed in Glascow, the same place where Massive Attack held a concert in 1994 to celebrate the launch of their second album ‘Protection’.

17) In August 2005 Banksy created nine murals in Palestine, since 2005 Del Naja collaborates with the “Hoping” foundation in support of the Palestinian pìcausa.

18) In 2007 in Bamako in Mali appears a work by Banksy. Del Naja has strong ties to the Malian music scene, where the album “Welcome to Mali” is produced in Bamako at the Bologan recording studio in which Del Naja is mentioned in the Madou section of Mali musicians.

20) The massive attacks had to play as guests at Banksy’s “Dismaland” theme park, the band’s performance was later canceled for technical reasons.

21) The English photographer Chris Levine takes a portrait photo of Banksy, with the artist photographed from behind and with the hood of the sweatshirt raised. The work is titled “Banksy (3d)”, Del Naja’s pseudonym when he paints. Four copies are printed, one is sold by Sotheby’s, one remains the property of C. Levine, the other two copies are owned by Banksy and Robert Del Naja. 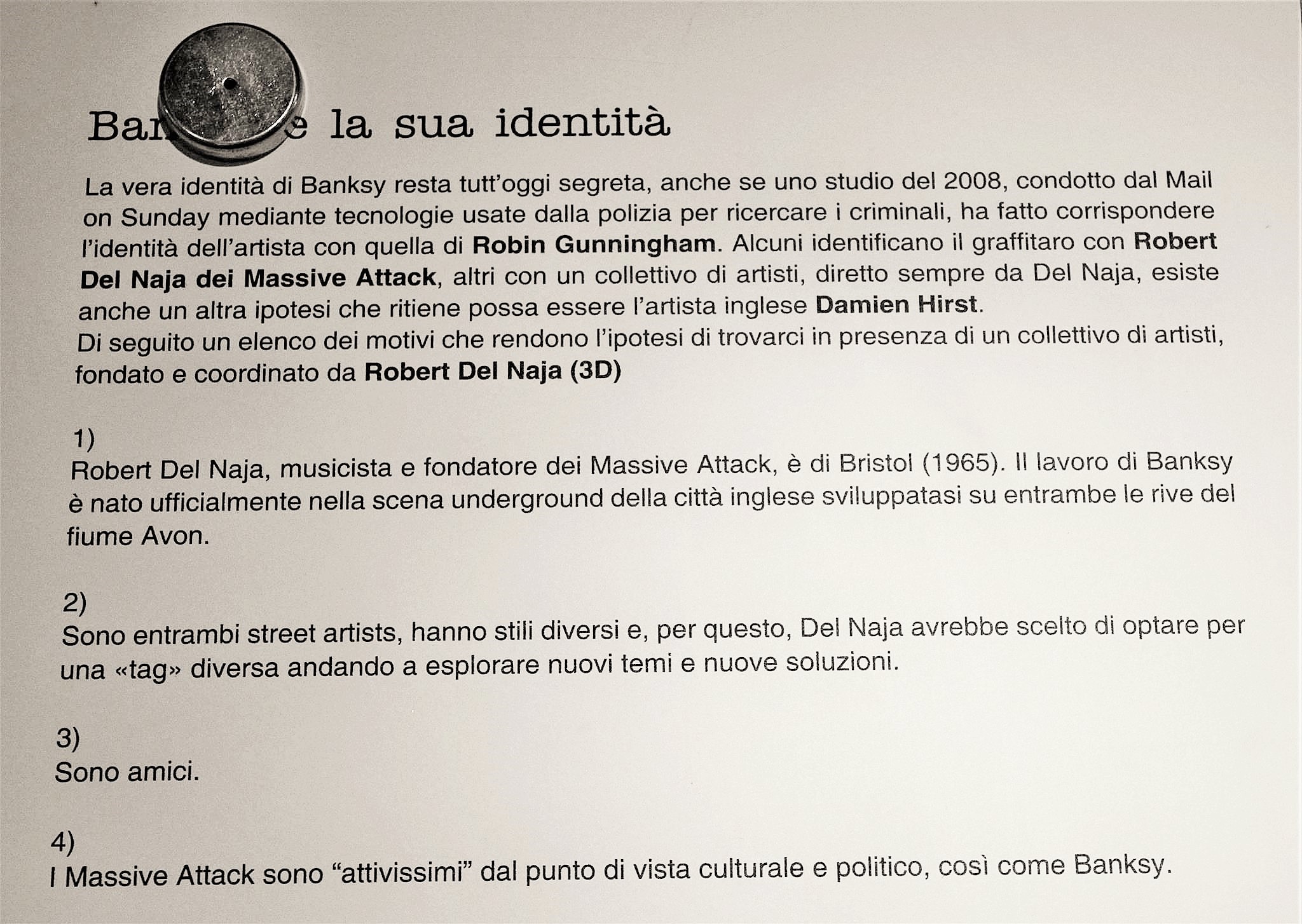 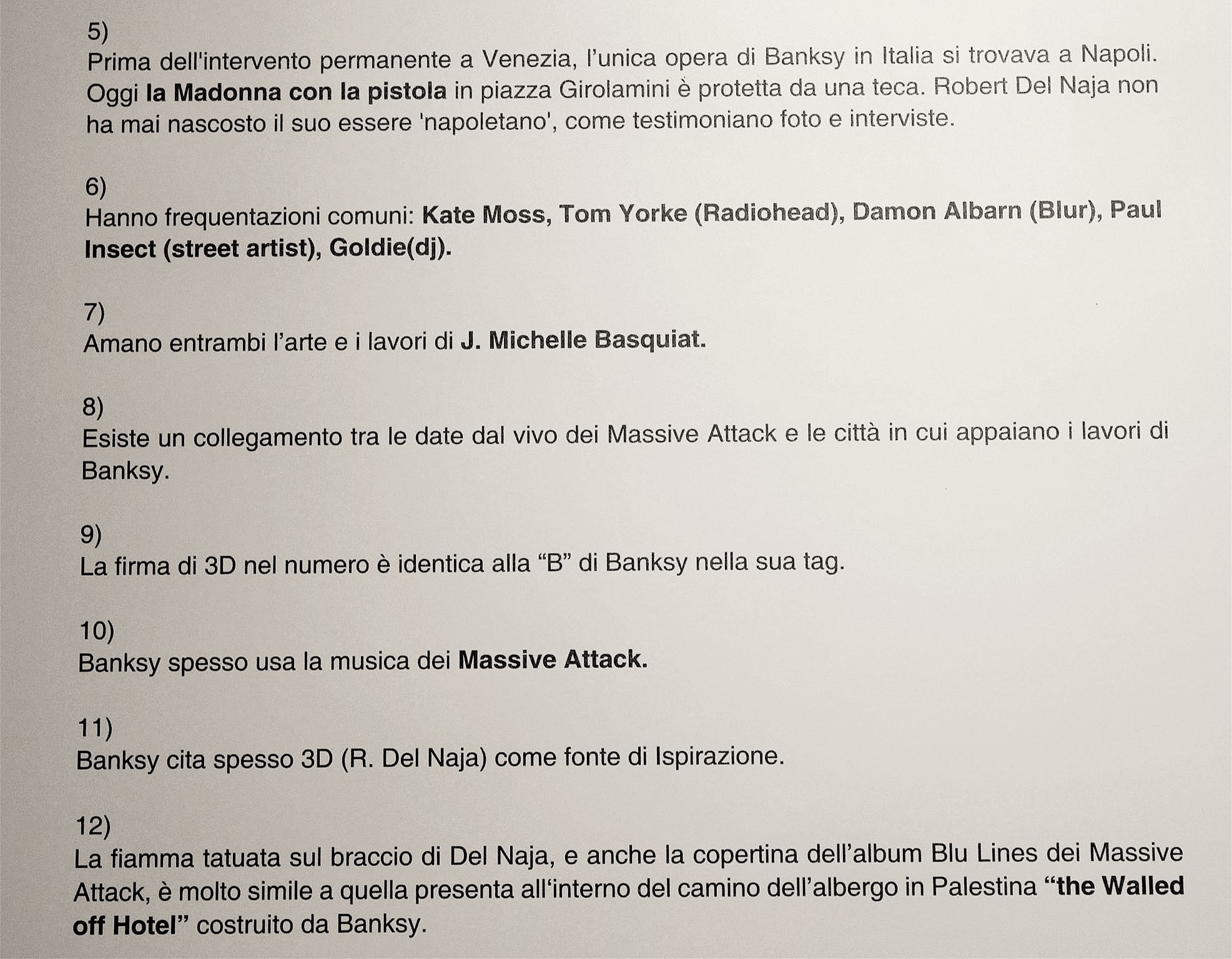 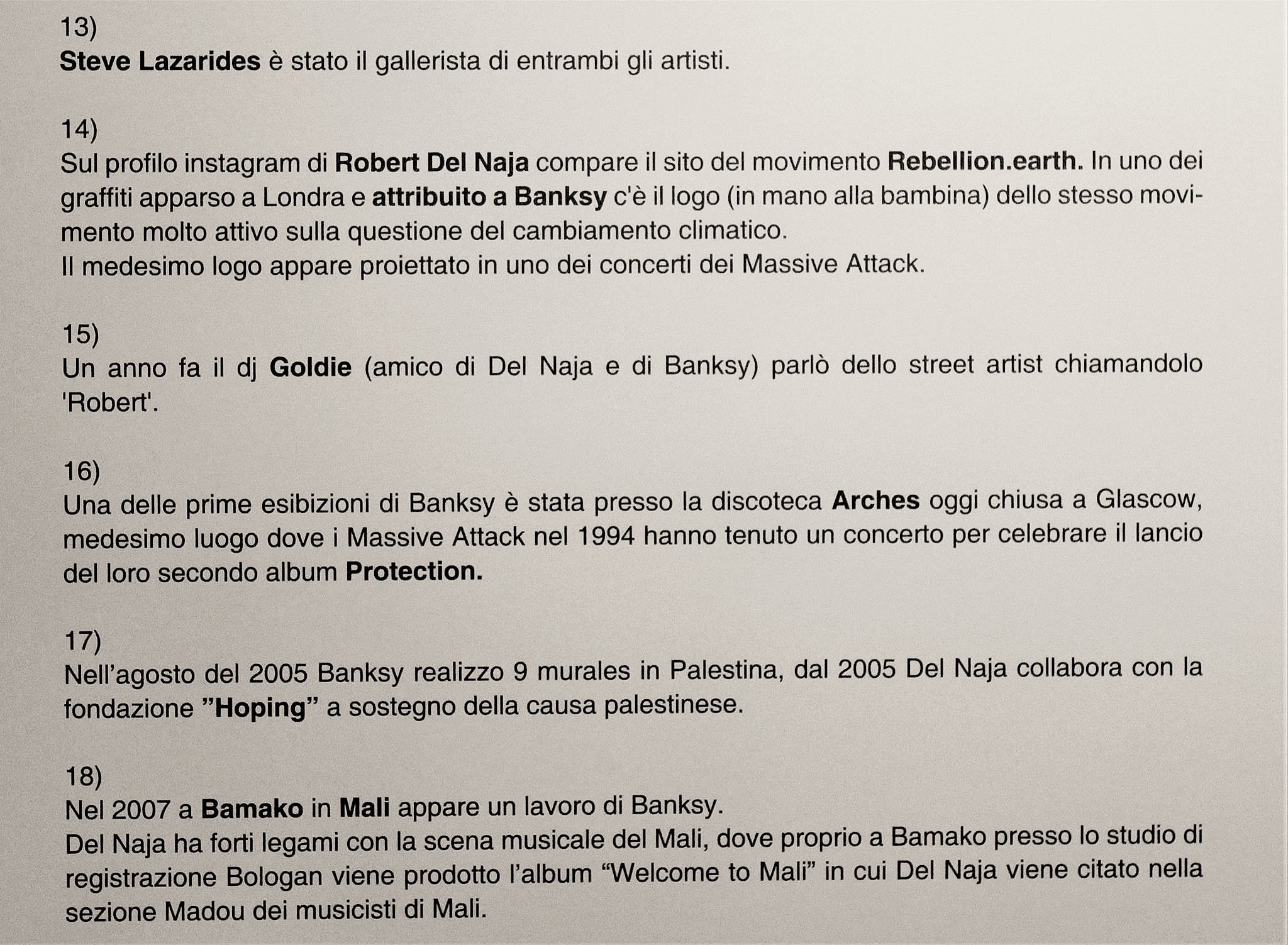 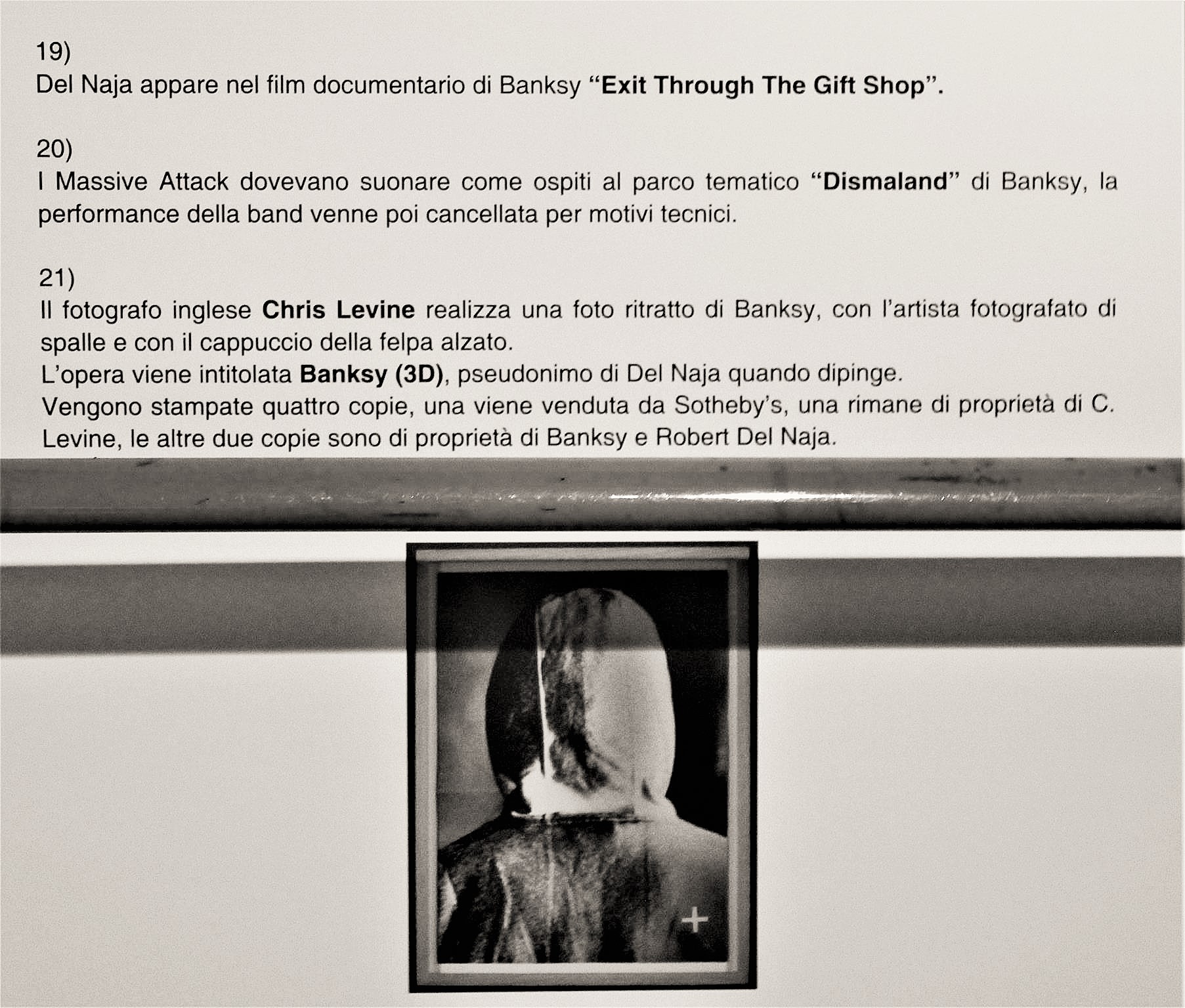 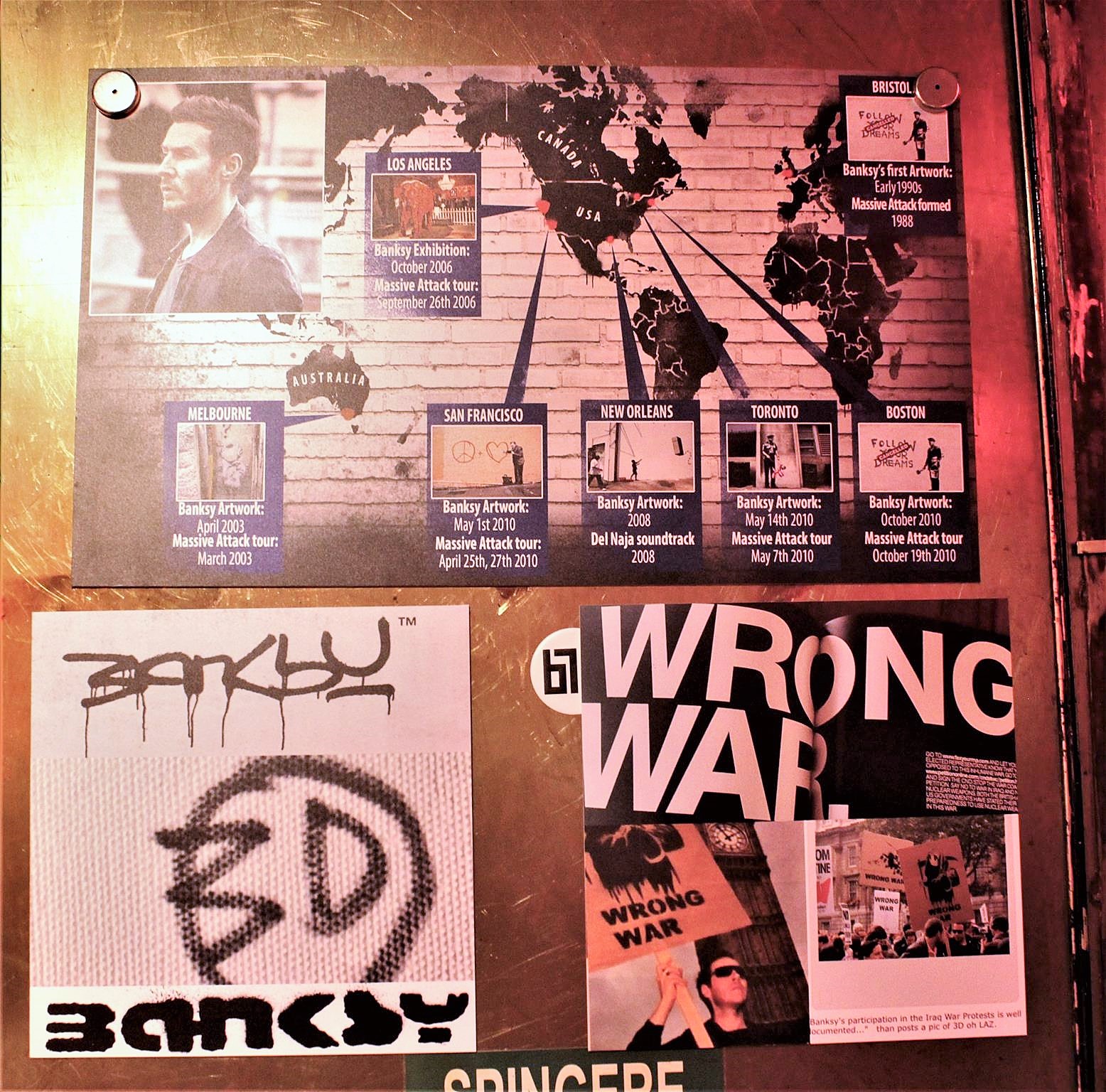 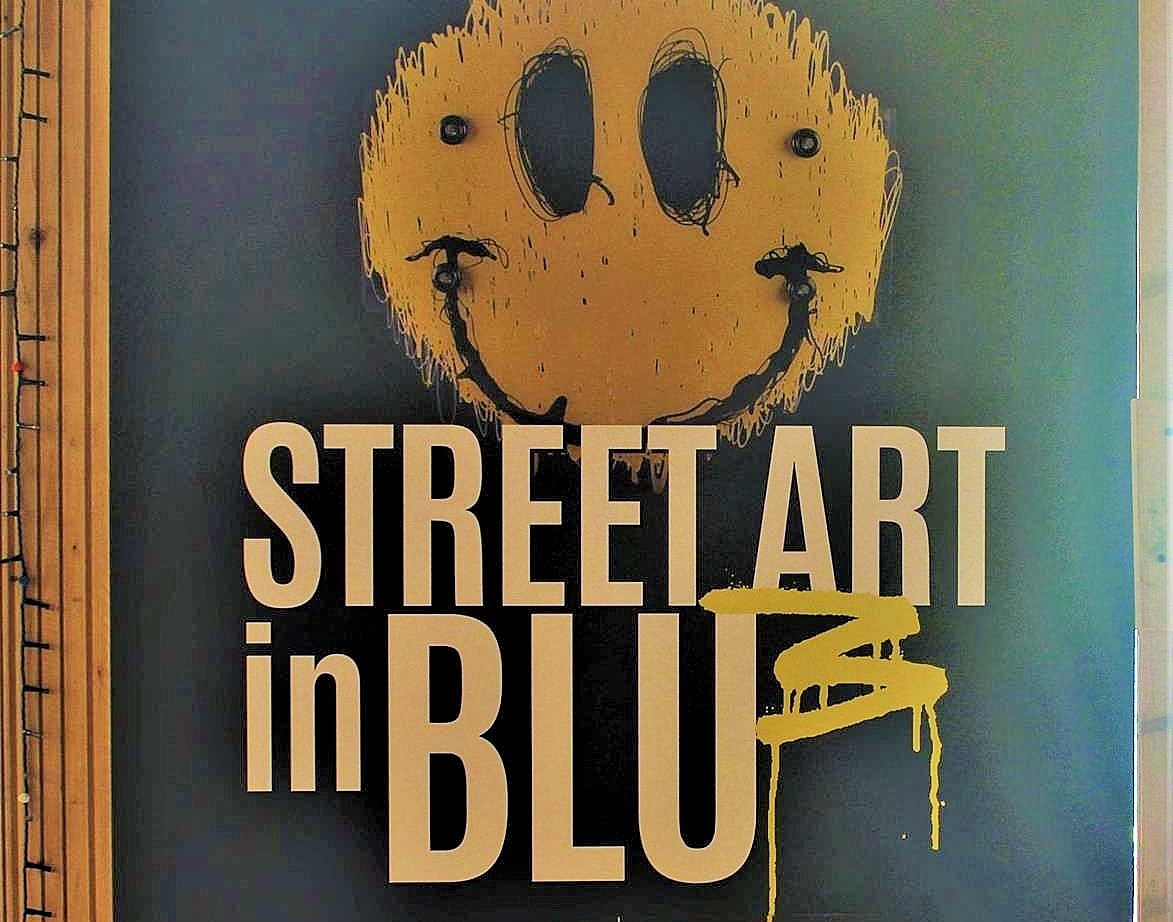 Back to “STREETART IN BLU 3” Main Page