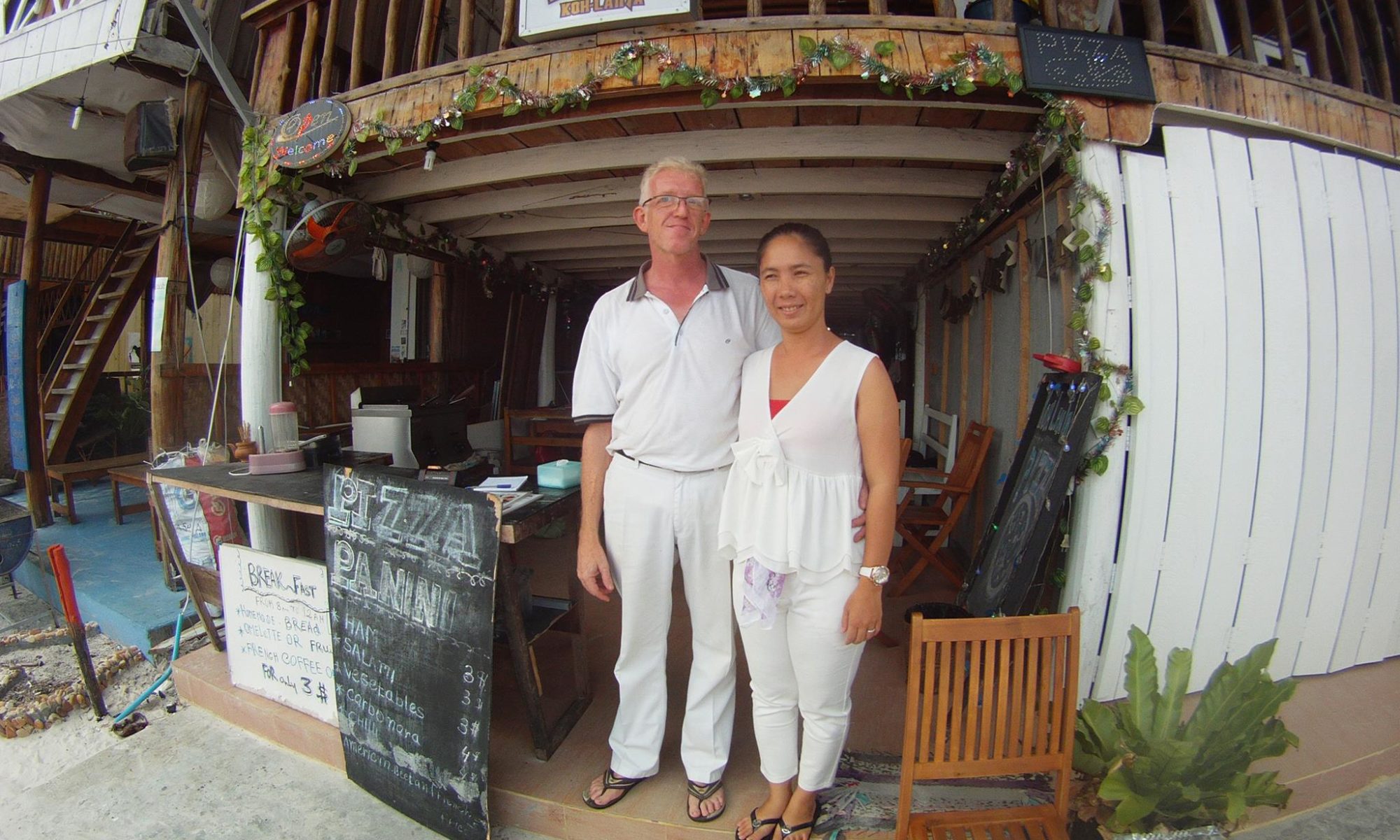 In fact, when discovering a country, you should of course immerse yourself in the local cuisine and homemade specialities and explore the unknown flavours. But we had been travelling in Asia for a while and hadn’t eaten real good bread for a long time. You rarely find this around, let alone a real pizza. It was all the more surprising to suddenly come across a cosy pizza bungalow on the beach at the farthest tip of the paradisiacal island of Koh Rong, where one of the most delicious Italian-style pizzas imaginable was baked. 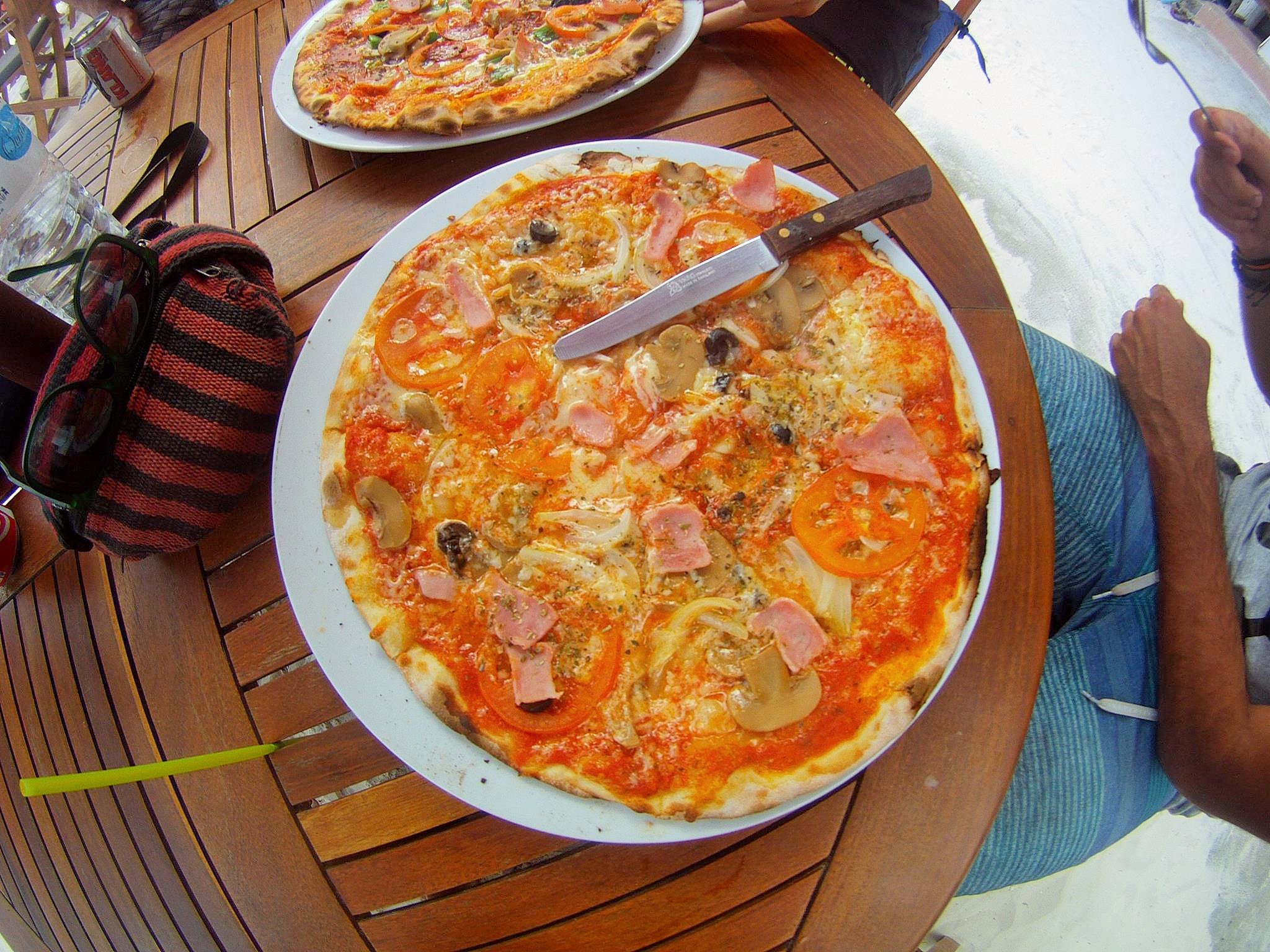 Owner Guy Bardonnet is actually from France, but emigrated to Cambodia in 2001 and opened the cosy restaurant „Koh Lanta Pizza” with his wife Lea. Actually, he is a trained engineer and was employed in the automotive industry. But at some point it was enough, it was just too much stress. Now he lives in paradise and bakes bread and pizza. He had learned the traditional art of cooking directly from an Italian baker. So he knows exactly what is important and how a real pizza should taste. Every day, the team of ten produces over 500 loaves of bread for the surrounding localities and private individuals. The special baked goods are a popular delicacy. On the second floor of the pizzeria, there are also regular film events on nature and sports themes. 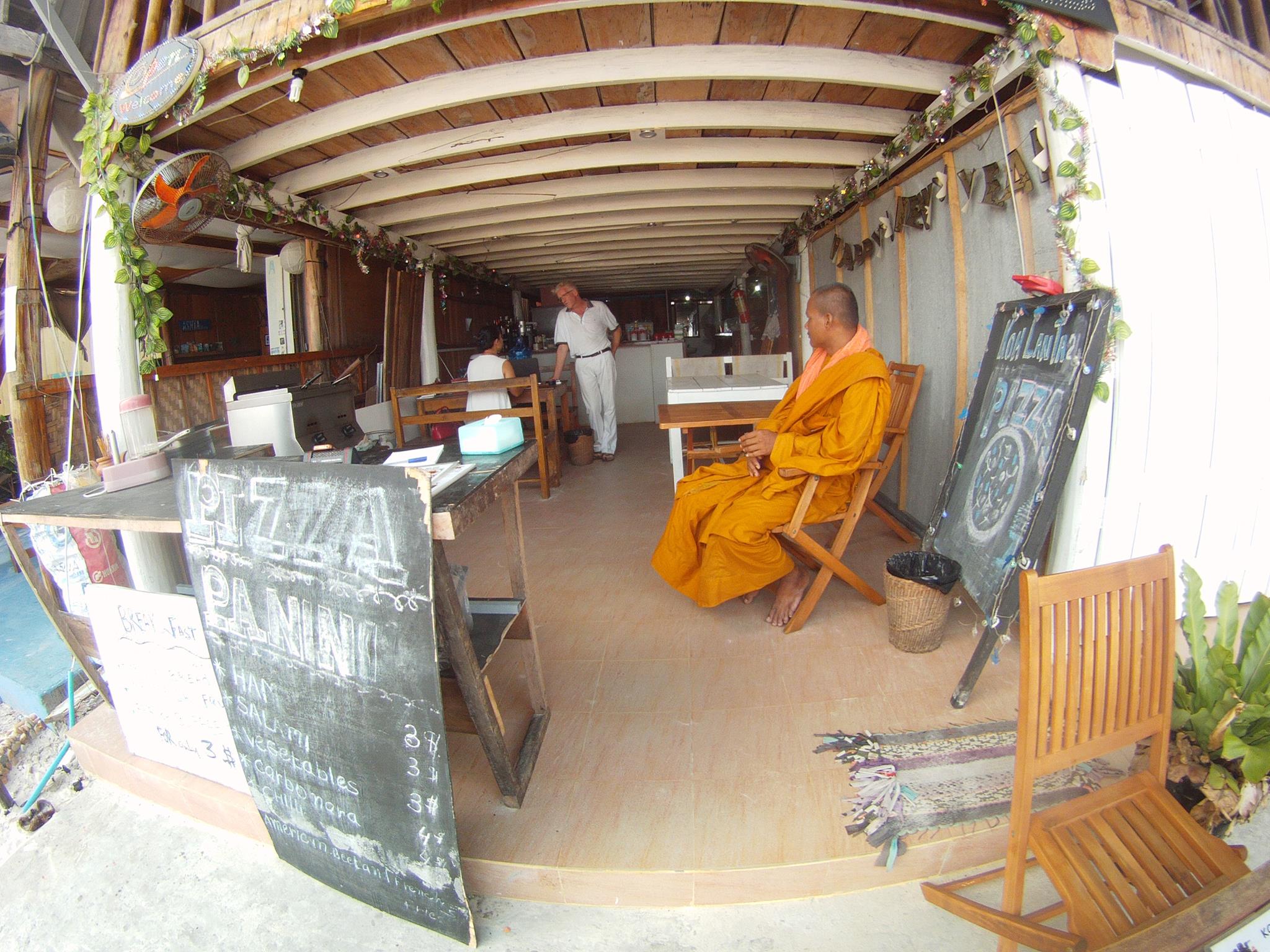 In the interview Guy tells us about the creation of his idyllic shop, why it is named after a Thai island and what is important for a good pizza. Of course we had dinner there a few times and documented the whole thing with photos and a mini video. Here is the podcast, the conversation is also written down below.

Tell me a little bit about your business, what you do and how it started.

I am coming here continuously since nearly 30 years. And all my family and kids are French and came always with me. I visited the first time Cambodia in 1993. About nine years ago I separated from my wife and I decided to come here and stay here. First I started in Phnom Penh of course. After that I came to Sihanoukville and fortunately we found this place here on Koh Rong. It´s just a beautiful island. And we started making pizza and bread. It´s quite special because my real job is plastic engineering for automotives. But I learned how to make good pizza from an Italian guy. He taught me the art of cooking, the Italian cooking. I´m very happy now. There is no more stress. No more. A little stress, but just look outside. It´s beautiful. 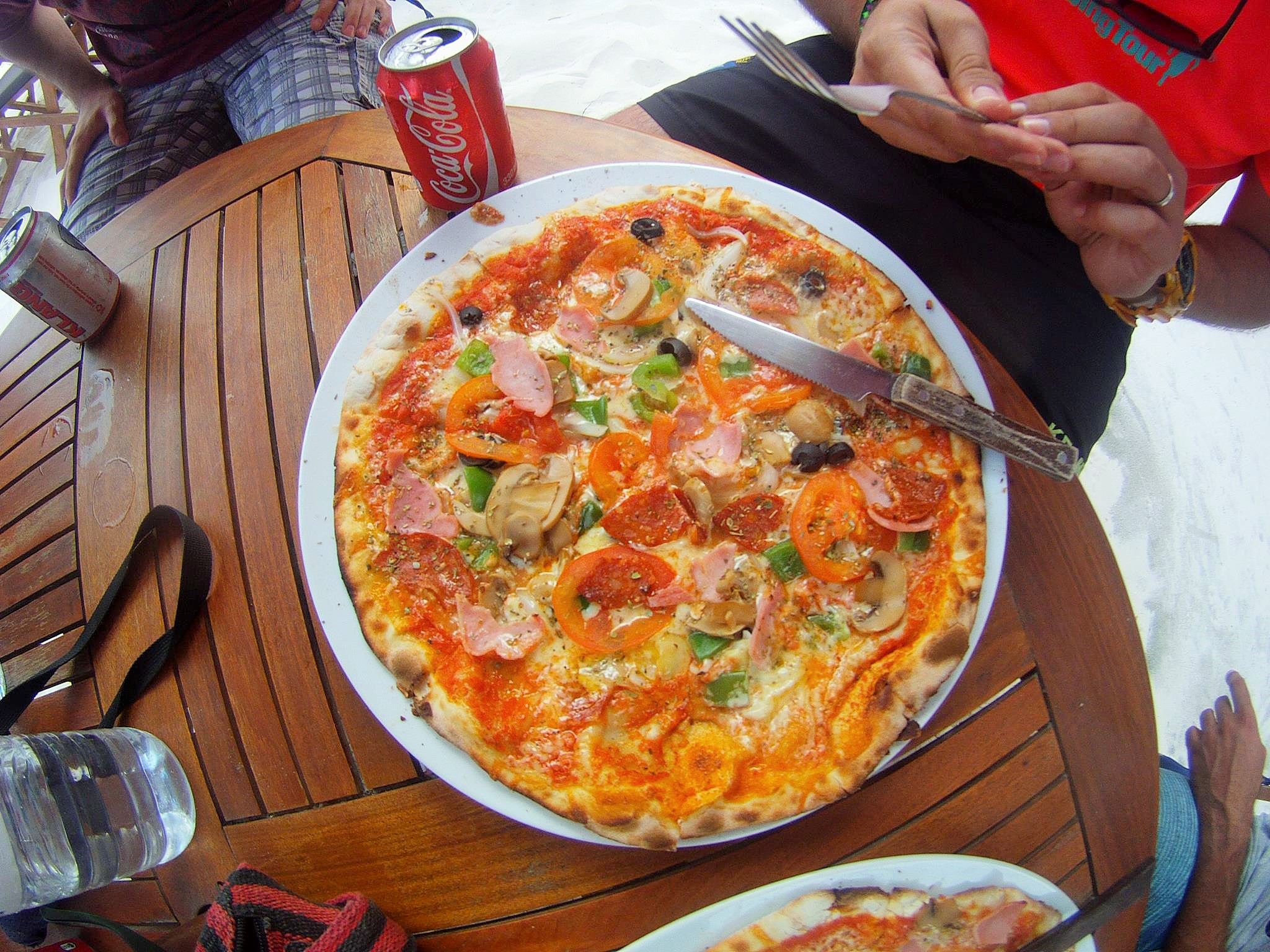 You make not only pizza, you bake as well bread. And this is rare here. You don´t find a place where you can get really good bread.

Yes. So we thought about doing something what others don´t do here. We started with the pizza and the bread. We are special for that. And we make some special sauce or pasta, also French cooking. 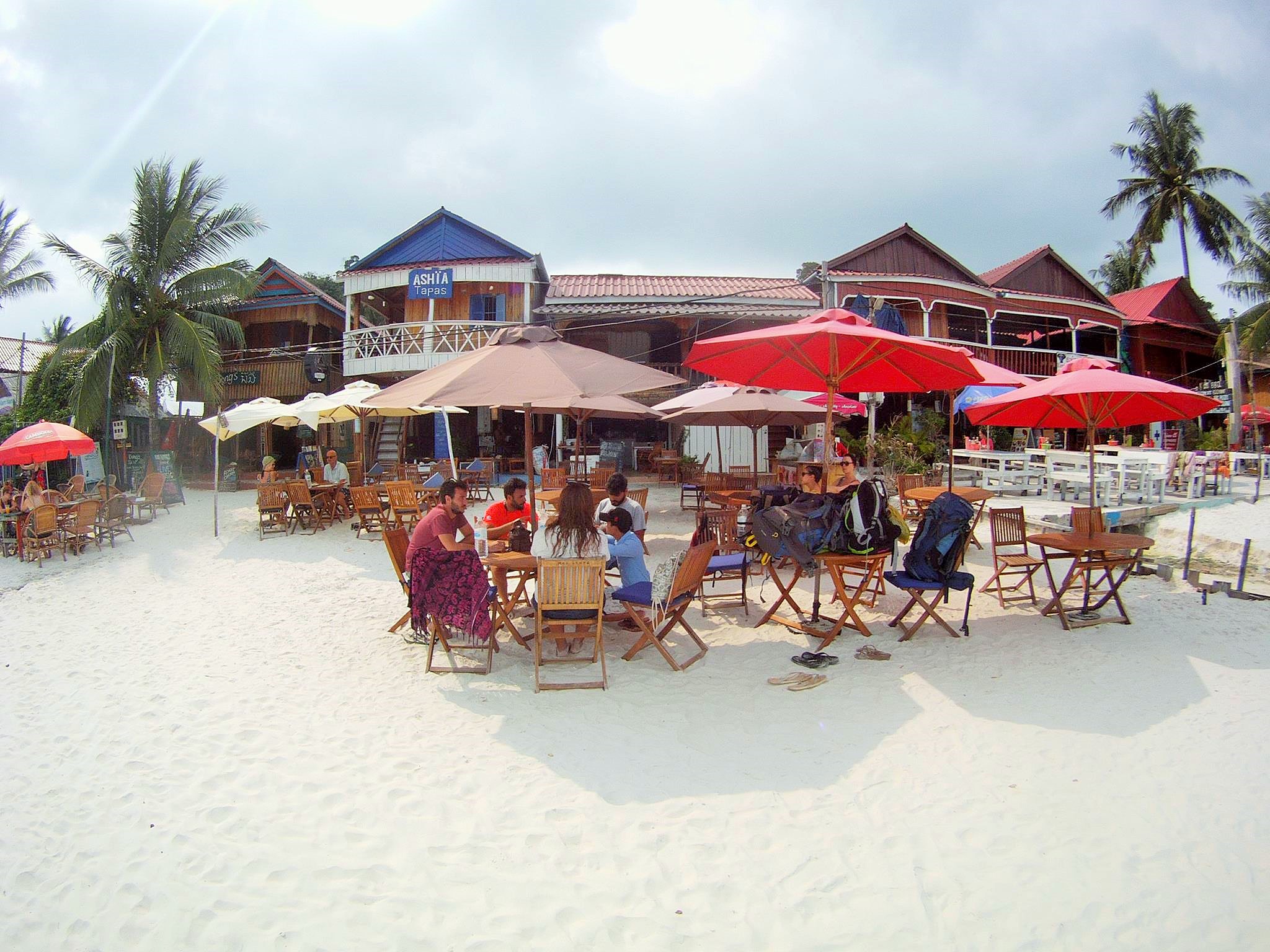 Yesterday when I was here, there was a guy who brought special milk. Then you said, you need special milk to cook.

Yes, as well for the espresso coffee machine. We are doing some café latte and cappuccino. And most of the milk here has too much water inside. It´s not good for the machine and as well for cooking. So we need a very good milk and good ingredients. 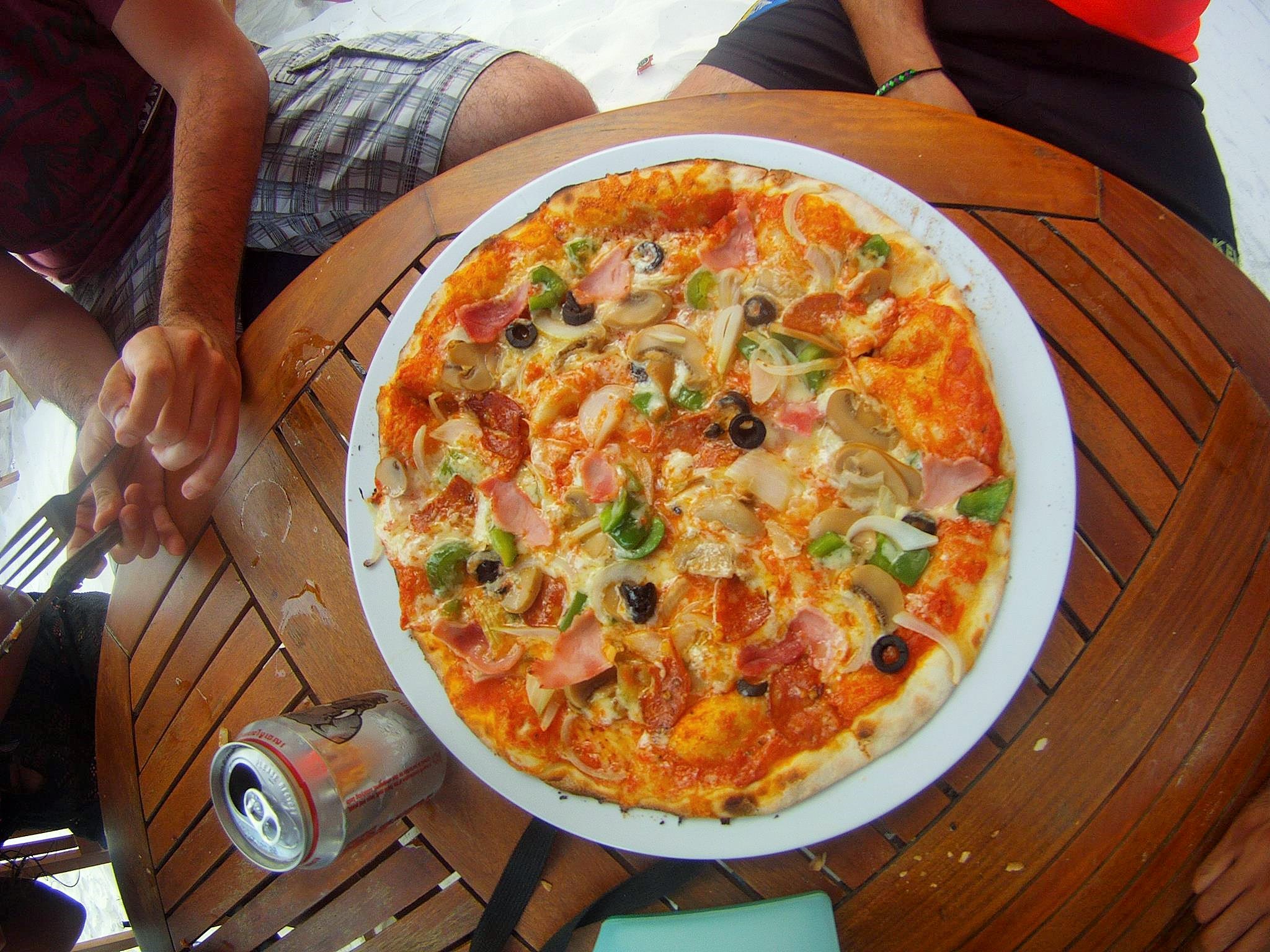 I tried several pizzas meanwhile around Asia, some here or as well in Bangkok. But they were just not that tasty. 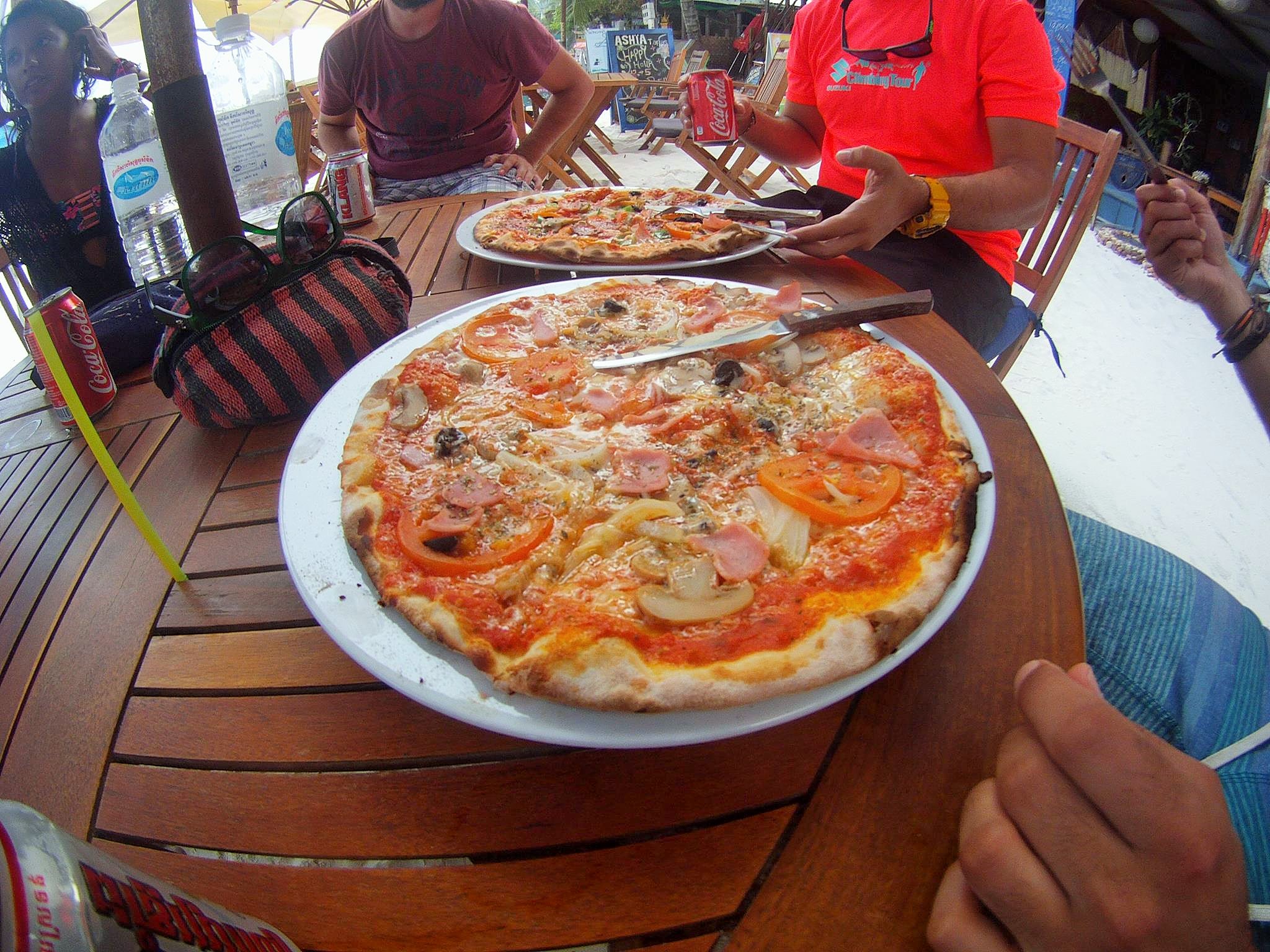 That´s why I was so impressed and I didn´t expect to get a pizza like this here. I thought it would be this average style like the other ones, but I thought “wow!” That´s a pizza like from an Italian oven. A lot of other restaurants don´t really know how to make a pizza so they bake how they think it should be. But you know the recipes and how it has to taste.

Yes, of course. The perfect taste and good ingredients, that´s very important for us.

For equipment you have as well a special oven.

Yes, we have two professional ovens and of course for the bread as well for the pasta. At the beginning there was no electricity on the island. We brought two fridges. The first two gas fridges. They were very expensive, but we needed that. So we bought them. And some years after 2000 electricity came as well on the island and also for 24 hours. So now we have regular equipment. But we still have the gas fridge. 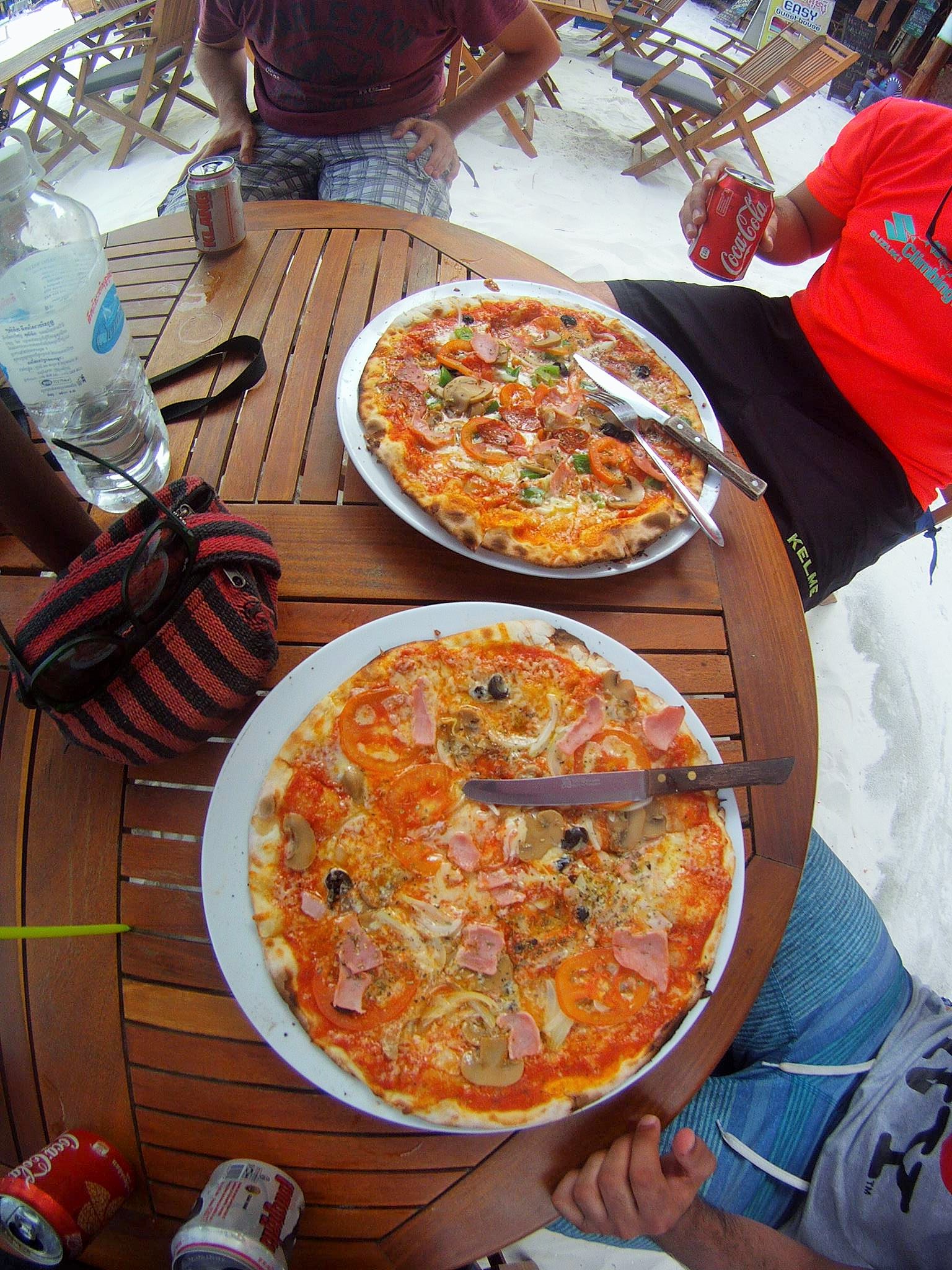 Sometimes for good quality you have to pay a bit more but the result will be much better in the end.

From the beginning we always tried to had the right equipment. 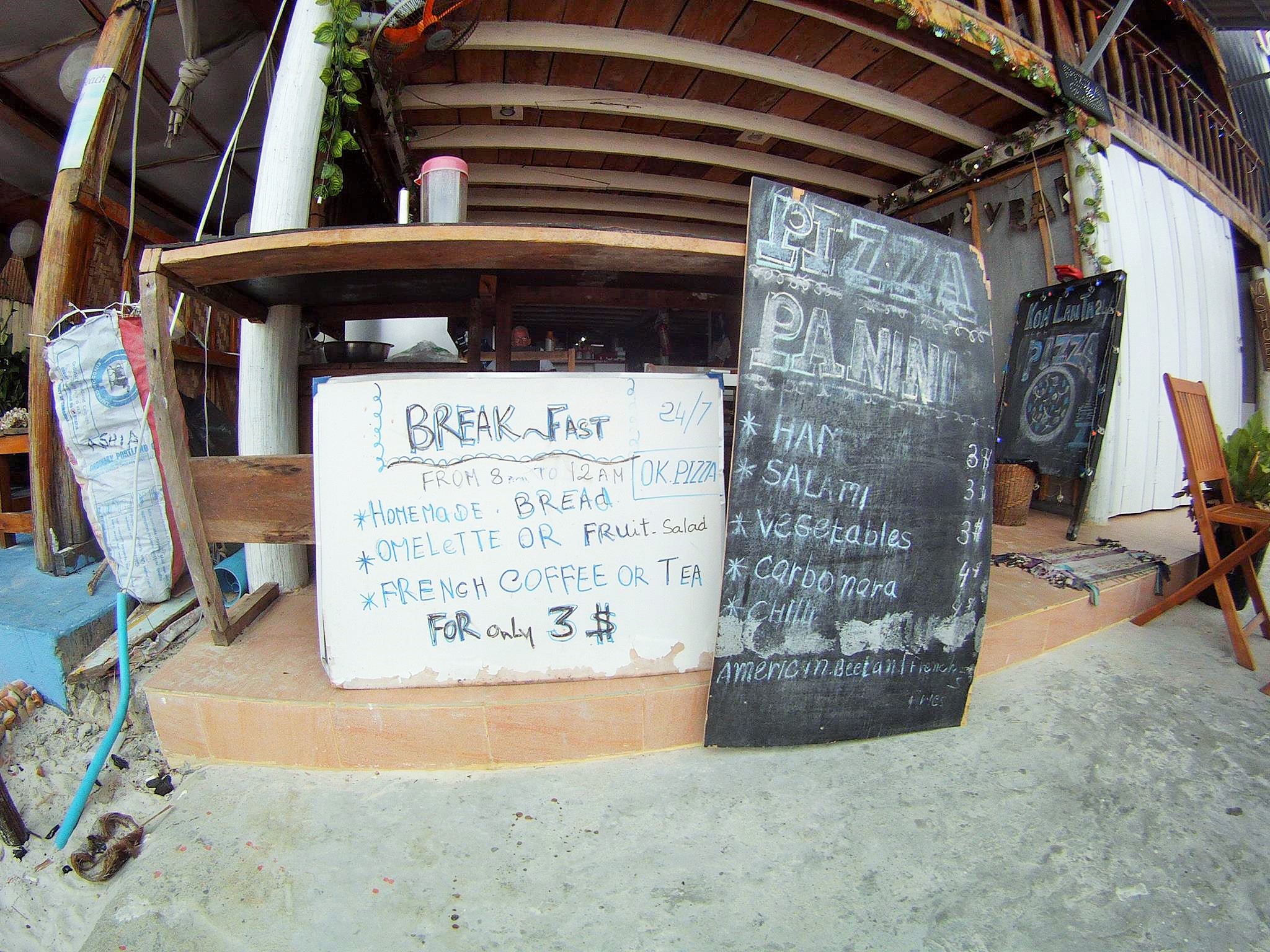 How many people work with you? And you said you learned your cooking from an Italian guy, so you are teaching others as well?

Today we are about ten people. Me and my wife and the staff. And yes, we teach all our staff everything. We teach them how to do Bolognaise, the Carbonara, pizza and bread, just everything. We want them to have a good curriculum as well. 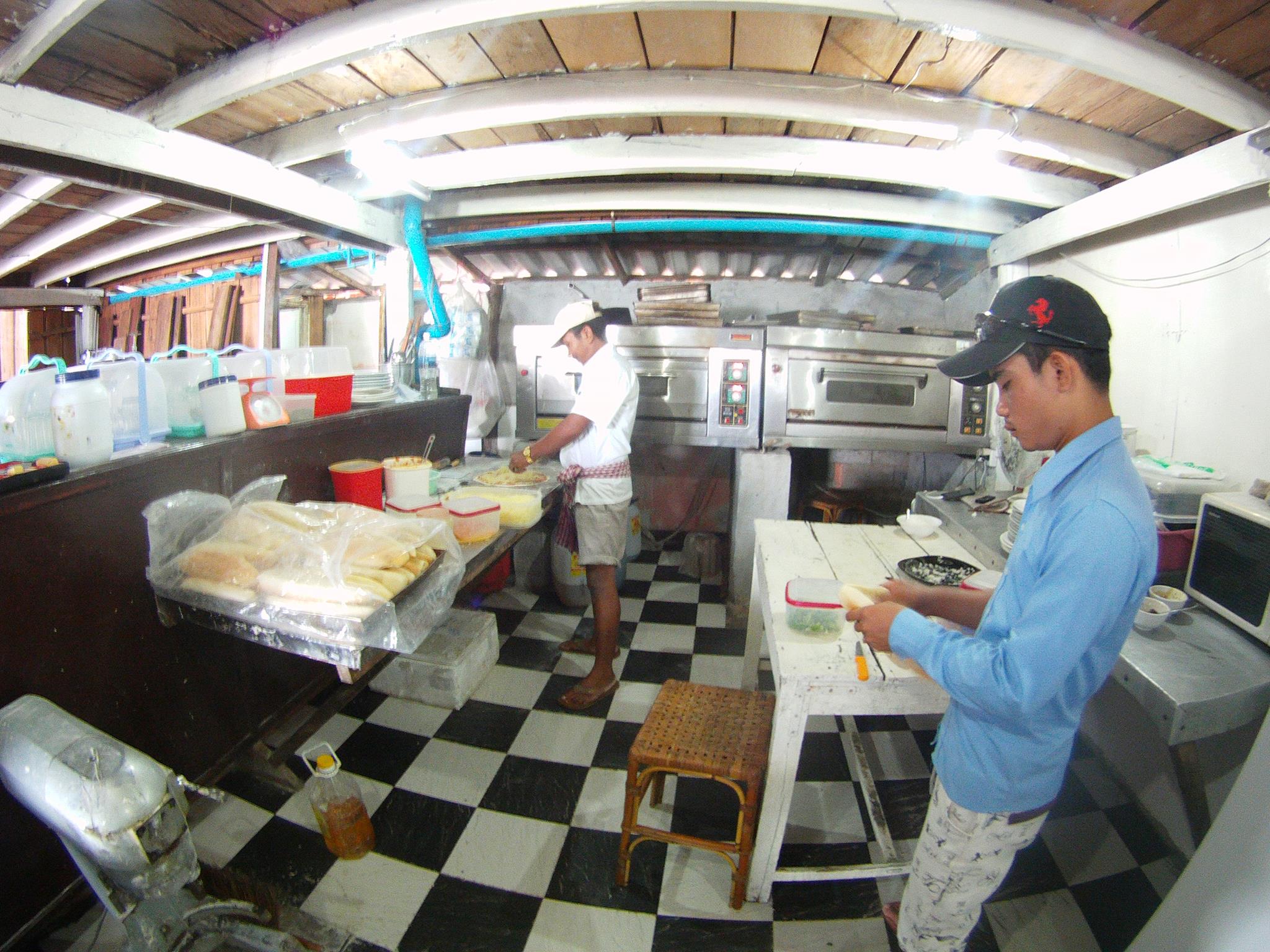 We are going to eat here now, so I will take photos of the fabulous pizza. And listeners and readers can see how it looks like. But in the end, they have to come here and try for themselves.

Yes, the best would be to come and try. 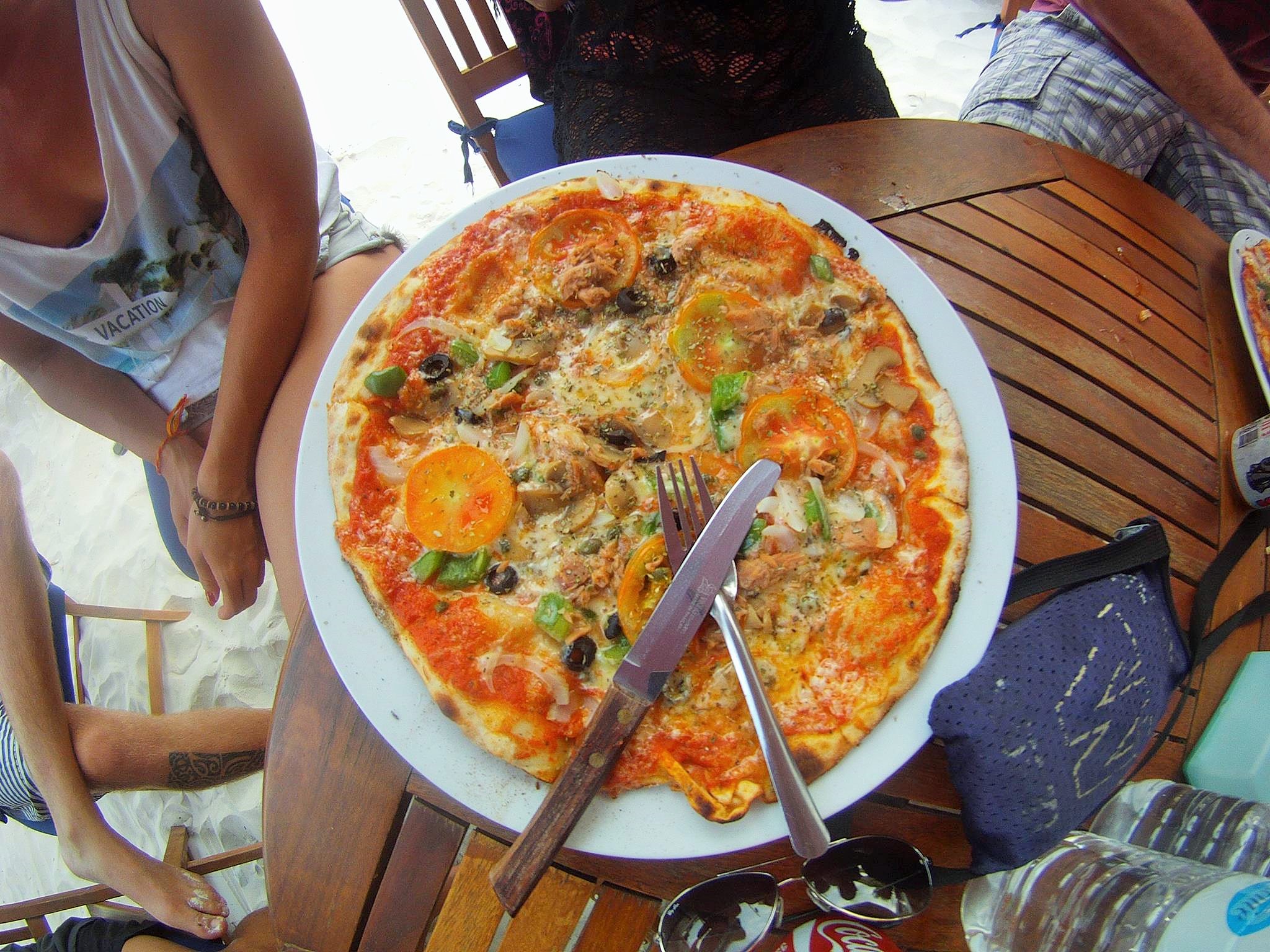 What is the name of your place?

Koh Lanta Pizza. When I arrived in Koh Rong I saw the waves and there is as well a French TV show with that name. It´s about survival and they filmed it on this island here. It was for the French television and for me it was funny to see the logo and they are producing here. It´s as well an island in Thailand, but for me the first connection is the French TV show about survival.