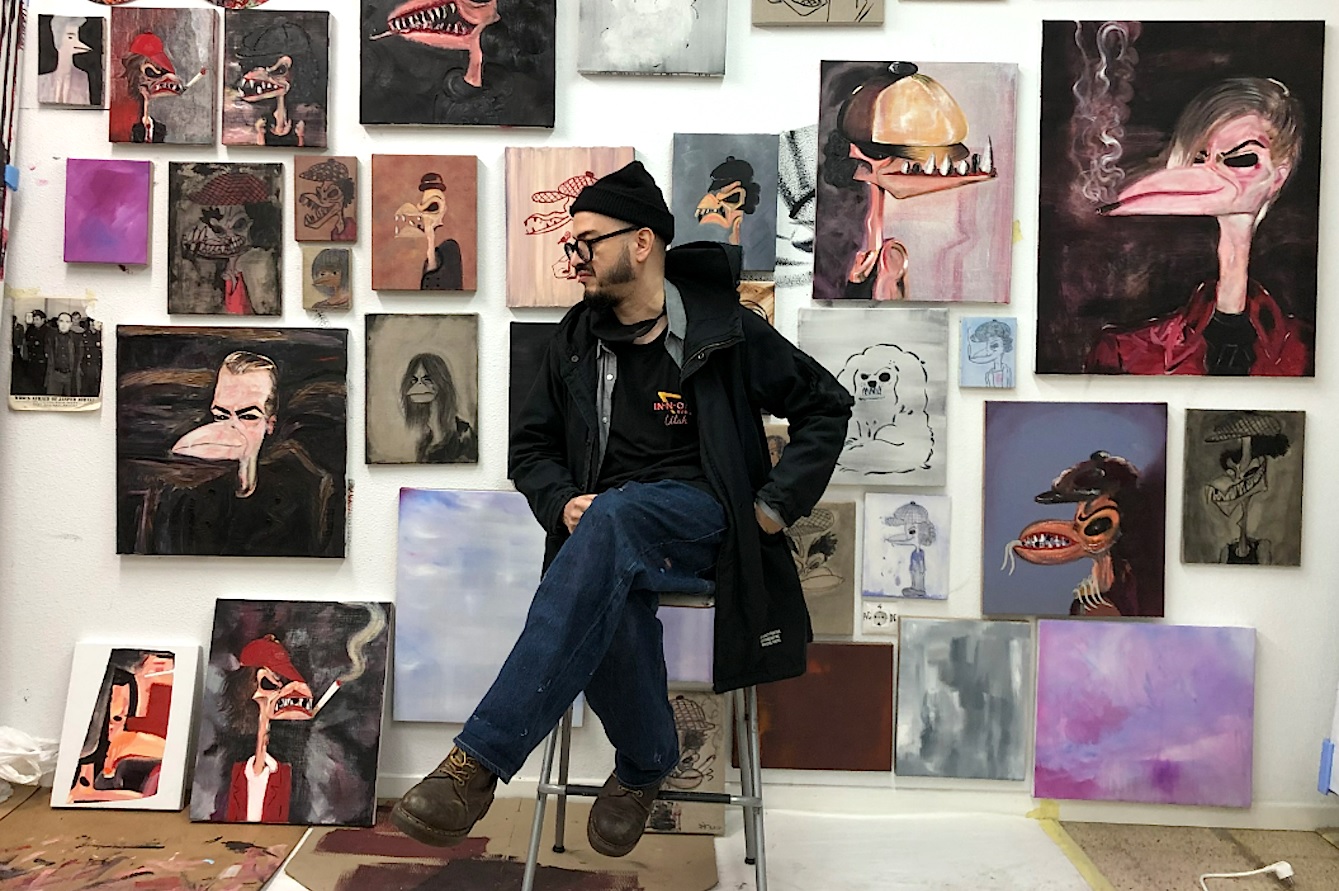 Abdul Vas’ work exhibits his quest for an original voice that one must endeavour to hear in order to comprehend, fathom, and appreciate the desires of an artist who creates a singular world, filled with symbols, messages, and cryptograms, some of them ill-intentioned at times.

The aesthetic propositions of the artist reflect upon the exercise of an artistic practice tied to the execution of a single operation of an indestructible affinity, of veneration, and of humble surrender to its unification by means of an artistic action. One might even compare the pictorial action with the strength one needs to enter a recording studio to make an album. Re-presentation and presentation of a constant impulse to display a revitalized grandeur that is exponentially valued towards a constant dedication to underscore the power of his obsessions in the world of AC/DC and all his subjects in general.

Since his first works emerged in 1997 he has remained faithful to this clarifying impulse which is aimed towards a single and precise objective –to venerate the greatest rock band of all time. Some of his aesthetic attention and poetical quest has also been oriented towards street art, achieving a vital connection to punk rock and skate art.

The manner in which the artist assembles individual elements reflecting all his aesthetic concerns, in order to give shape to something new that materialises thanks to the juxtaposition of images and ideas that engender a disturbing atmosphere which oscillates between abstraction and narrative, expressive and iconic, and both sophisticated and raw techniques.

Embracing the AC/DC universe as his own, and conjugating the aesthetic elements of mass culture that are found in the band’s largest concerts, with his quirky poetic vision of reality, Vas is able to generate a type of visuality in which the aggressiveness and the elegance of the Australian musicians and their virtuoso riffs are spliced to the threads of his complex references, enabling us to carry the emblems of desire and freedom proudly, in contrast to the imposed creative forms that take no risks and lack transcendental ambition.

Accordingly, Abdul Vas’ imaginary universe and his profuse output of signs and stories (always in step with the fascinating Kippenland world in which chickens direct and control intergalactic trade flows), the tours and performances of the Australian band have a relative importance since their work references questioning of the ways of approaching new visions of the mythological configuration of rock and roll, street art, and their influence on contemporary visual culture. Vas portrays these idols of the masses as chickens on stage facing their delirious audiences, and places them in their true dimension as glittering empowerers of a differentiating culture eager to serve as a centre of emancipation and of redeeming vengeance. The broad visual richness of his work as a whole is the perfect starting point for an enquiry into the limits of what exists, a commitment to an unknown world, and the development of a genuine interest in ideas and imagination.

Abdul Vas was born in Venezuela in 1981 and lives currently between Madrid and Ho Chi Ming City. His work has been published in Vice, Rolling Stone, Neo2, Rock Zone, Dazed & Confused, Hypebeast Magazine, Harper’s Bazaar, This is Rock, El País, ABC, Freim.tv, Esquire and The New York Times. His works form part of private collections and have been shown in the United States, Latin America, Asia, and Europe. He has had solo shows at the Museo de Arte Contemporáneo (MAC) in Santiago, Chile, the Senda gallery in Barcelona, the Casado Santapau gallery in Madrid, Proyecto H in Mexico City, Luis Adelantado in Mexico City, and La Fresh gallery in Madrid. 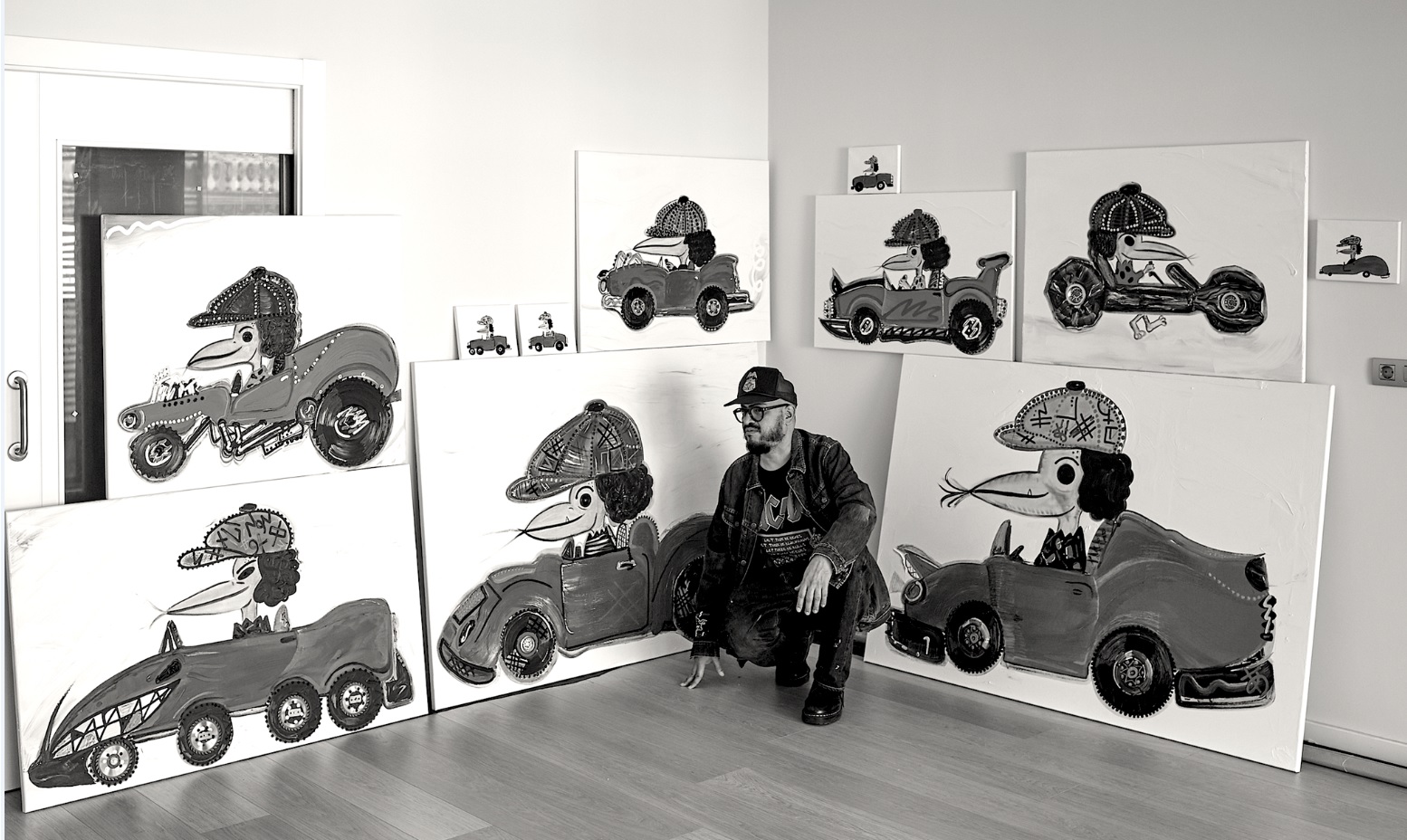