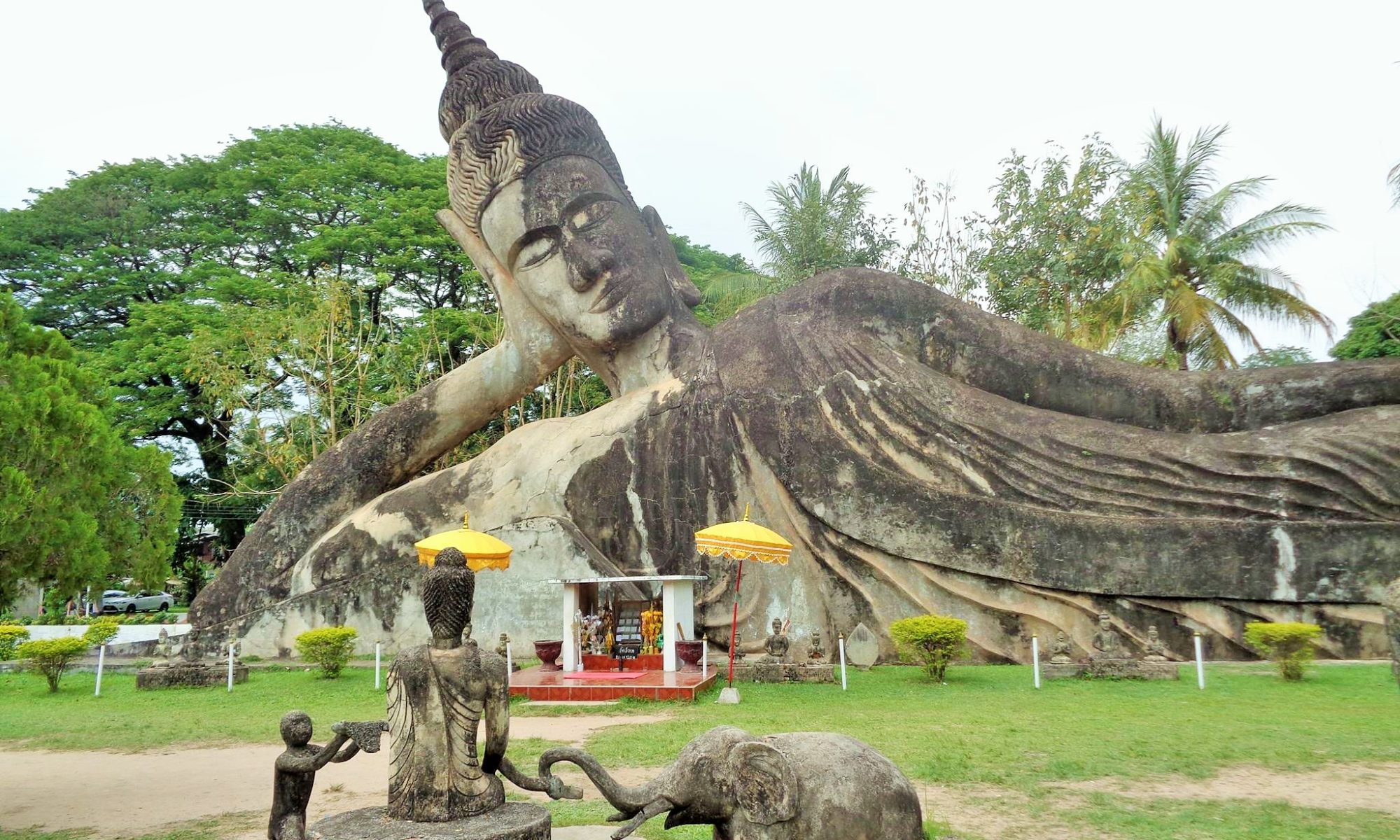 After leaving Vientiane on our way to the 4000 Islands in the South of Laos we passed a monumental and historic treasure site you shouldn´t miss if you are around. The local name is Xieng Khuan, but the English words for this area make it self-explanatory for what it’s about. The Buddha Park is a park filled up with over 200 Hindu and Buddhist statues. There are several Buddhas spread across the square, as well scenes from ancient legends and numerous gods and goddesses.

The historic site is located about 25 km southeast from the capital in a meadow by the Mekong River. It is a sculptural park, not a temple or shrine, but because of the numerous religious images the locals call it still “Wat” Xieng Khuan, which means “Temple”. In Lao it would be [ວັດຊຽງຄວນ] and in Thai [วัดเซียงควน].

In 1958 the priest-shaman Luang Pu Bunleua Sulilat started with the Buddha Park and gathering statues. After the revolution in 1975 he had to flew the country but started soon a second Buddha Park close to the first one on the oposite side of the Mekong River in Thailand. It is possible to see the Lao Buddha Park from the Thailand Buddha Park.

The statues are made of reinforced concrete covered with ornaments, the design can be bizarre sometimes. They appear to be centuries old, though they are not and especially prepared to look like that. There are sculptures of humans, gods, animals, and demons, as well numerous statues of Buddha, characters of Buddhist beliefs like Avalokiteśvara, and characters of Hindu lore, including Shiva, Vishnu, and Arjuna.

Particularly to mention would be the quite huge chilling statue which ten times longer thant the other ones and another notable sculpture resembles a giant pumpkin, which you can enter. It has three stories representing the three levels Hell, Earth and Heaven. You can step in through a mouth of a three meter tall demon head and explore the inside tomb filled with many more smaller figures or definitly as well climb on the top to have a phenomenal lookout over the whole park.

The sculptures haven´t been made by skilled artists, just by normal unknown workers. Still they are well created and just give you a lot of times a goosebumbs effect. It is very impressively walking through a garden over and over filled with stone sculptures which are representing transcendent spirits. We felt in some way humbled, but also honored while walking through the hall of the majestic gods. And then after spending nearly enough enjoyable time at the Buddha Park quite a storm started. Still warm, but chaotic windy and the sky went dark for half an hour. I won´t forgett that visit, it was just fantastic! The thunder storm ending made it even more mysterious and energetic.