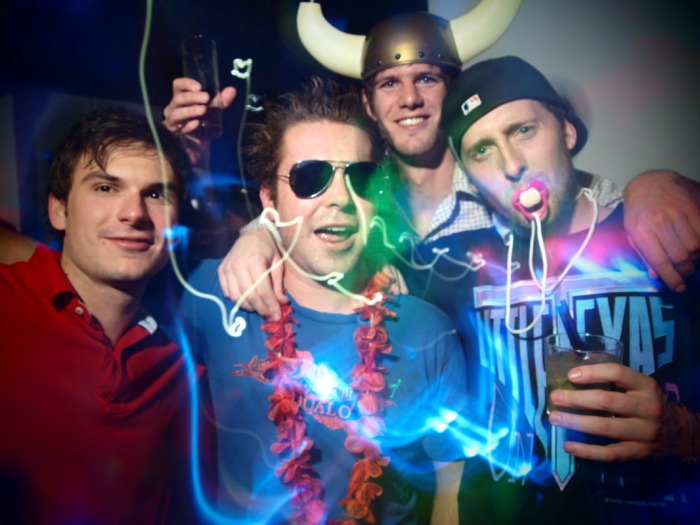 How a good party should be: Good parties have to be badly organized, the guests should have to pay a lot for entrance, the DJs should get put on a podium for glory and there they should play a lot of same-sounding crap music over and over again. A drink should be at minimum 10 Euros and at least have some ingredients from the next street, toilet water and other indefinite moistures in it, and of course before serving it should get put in very high quality bottles with nice labels. But in the end it´s not about the drinks. It´s about the cool and high expensive and hipster outfit. And the fucking shoes….

All this is total bullshit and absolutely nonsense, actually it´s the total opposite of what the people would like when they go out. But why do so many of these “clubmanager” think it should be like this to make a good club or a good party? In the end you just get more money out of it that way. But most of these owners just don´t understand what the real meaning of a “club” or a “party” is. It´s laughable that people wonder why clubs like King Kamehameha or Living XXL in Frankfurt had to close and people run to other places the same style, like decals, just closer in the city. Nobody went there anymore. That just shows how much commitment the visitors and as well the owners had in the project. Something between „a little bit“ and „absolutely nothing“. But how should this partysoul be able to develop if it´s influenced by commercialization from the beginning? There has to be another way, and in the end the other ways are the only ones which will work.

Some years ago in a country far far away behind 7 mountains in a city which was called Valencia, has been a group of weird, strange and crazy – but smart – students who had to do their erasmus something. There in Valencia the situation was described like above. And this group of students was annoyed with that kind of nightlife. Totally pants partys, 5 times during an evening the same shity song, decoration and visuals are total foreign words?!? But the entrance in Spain has been around 10 Euros and the drinks have been between 8 and 15 Euros (should be still around this or more). But it was not only about the prices, it was as well about the whole atmosphere. It was just all filthy. So we got sick of that and started our own parties. In our flats. For first. Then in the etages… and then just in the whole buildings….

After a short time there developed a group with a lot of funny, special, dynamic, inspirative and individual people with some energy from all over Europe, who wanted to party. And real party!!! Not that bullshit!!!! We started organizing partys because we liked it and not to make money with it. And this little factor changes everything. So it was clear that we needed something more than just a “piso” or “una casa”…. Let´s rent a club! But where to get a club? After meeting some idiots and Jesuses we found Pascual and the Whitehouse. You just have to look on a area where there are a lot of clubs and which one has just opened and not that many guests already. You promise the owner to fill the club for one night and one party, the rent should be alright.

To get the place filled up with people was an easy thing in the end. The ticket was 15 Euro. Sounds like a lot. But included in the ticket have been 8 drinks!!! The drink purchase after these was normal priced, like 3 Euro for a beer. And we managed to get a whole buffet with different foods for free. Mostly at late hours after it showed clearly that the money was in, a lot of alcohol got spread out to the guests for free. Really a lot. If I look back, I just remember after 3 o´clock everything was for free… With this way of organizing a party you will find a lot of musicians and djs as well easily. There are a lot around the world who do Erasmus as well, but even some people who are doing normally gigs at Amnesia on Ibiza and a guy who plays in the Fabric in London came to us and took part on the project. They had been sick of the money-sucking clubsystem and liked the refreshing normal party way. In the end you just have to throw some wigs, some Viking helmets, some sunglasses and other tools in the room, a lot of cheap drinks – then it will be nice and funny.

After a while a lot of students knew about this parties. They came and loved it. It was possible to rent other places or make more and more innovative Parties. (Jesus called back of course, but no time now). All this didn´t have any equivalent concurrent in Valencia at this time, and it is still lacking. These parties have been the best and were legendary. In the end for the last “ThisIsNotAnotherErasmusParty” the Pacha was rented. Some people from the crew even flew back to Valencia to take part.

But actually this was not the last party…. Most of the first group members went after the study back home to their countries. But some kept on going, stood there longer and developed this first platform up to a worldwide acting network. A lot more people joined in building up the network and there is meanwhile a nice team. They organized more and more parties, developed more and more features and combined all of it in a functioning online party-booking-and-event-information-system. They built up structures in some big cites and a lot more are to go. The idea is just fabulous, the story nice to tell.  Just imagine if you would move to another city. Which kind of people would you like to meet? So if this should be the case, that you are on a move or only going on holiday, check the website of Xceed. Maybe the city is already included in the network, you will find a lot of parties, concerts and events, there are job contacts, advertisements for flats and a lot of other information for foreign students.

Not only the visitors and organizer benefits from the project, but also programs for development aid, charity and NGO work. At first only the old cloth and study materials of the leaving student have been collected and brought to the Red Cross in Valencia. Meanwhile they built a school in Honduras and support projects in Venezuela and Africa. During parties and events you can spend something for good while drinking for charity. For every beer you put something in the pot. Get drunk and help at least a little. You can spend and do more of course if you want. The parties are amazing, the WOW and RISK ones you shouldn´t miss if you have the chance.