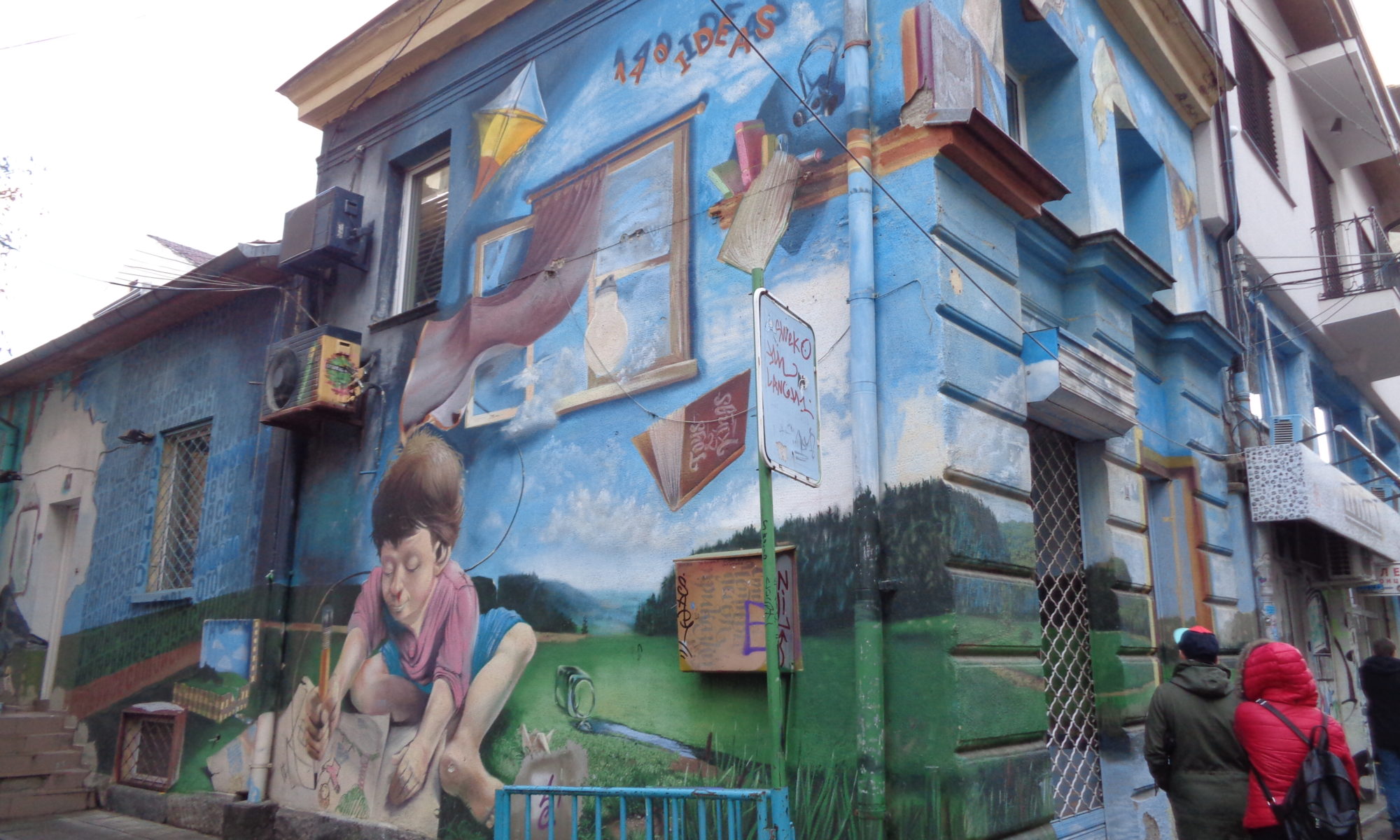 We had already an article about streetart and the city tours in Sofia. In the following story we want to tell you a bit more especially about the Sofia Graffiti Tour and some little streetart gimmicks, we found during our expedition through Bulgaria´s capital. The Graffiti Tour starts on the four days between Friday and Monday always at 3 pm at the corner of „Todor Alexandrov“ and „Bratya Miladinovi“ in front of the Statue of Sofia close to the metro station Serdika and is definitly recommendable. We were very lucky that day, no one else was taking part at the tour, so we had our tour guide Niki Borisov just for ourselves and could ask and discuss even more. 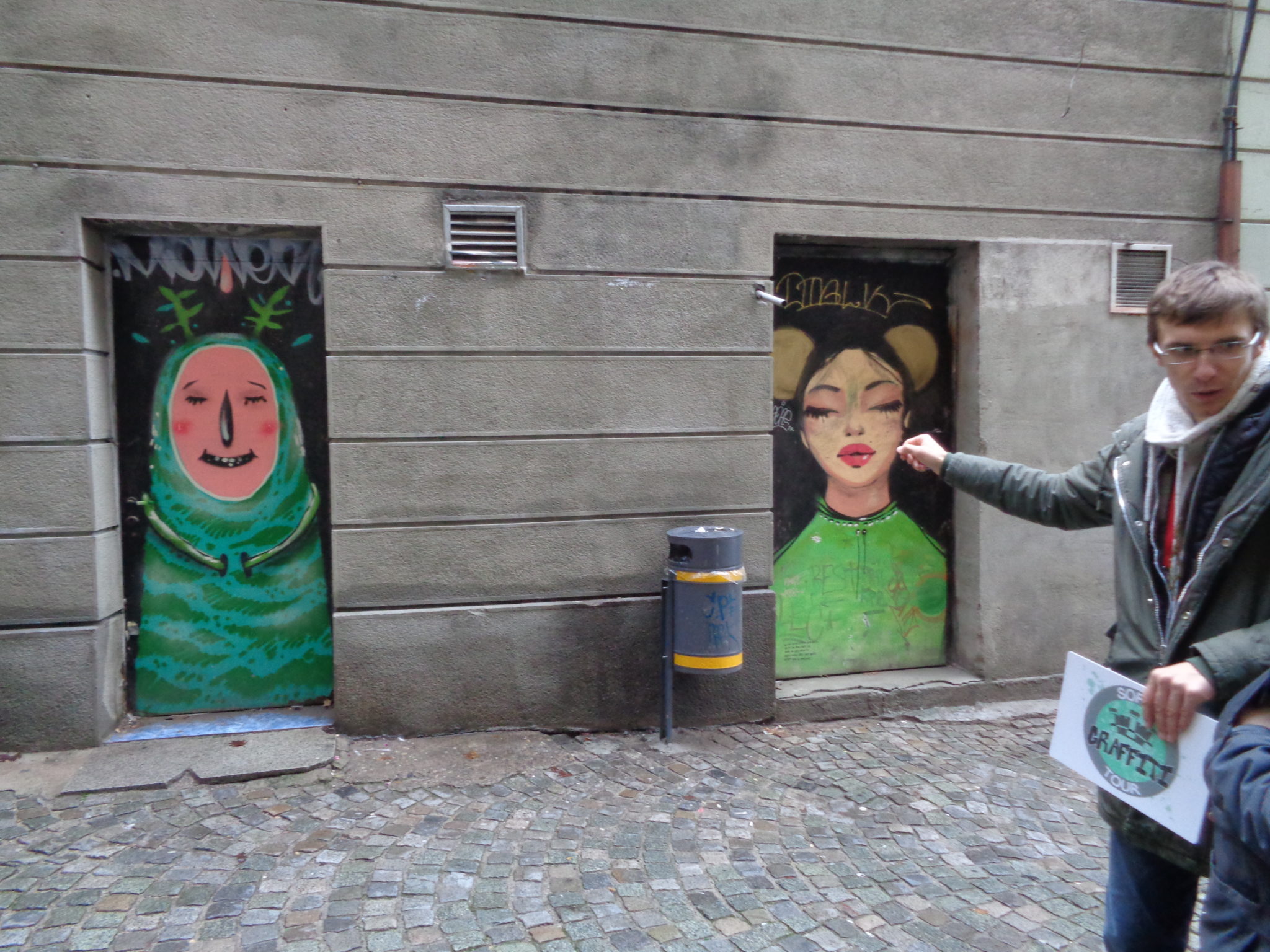 The city is full of graffiti bombings and tags, with some luck or by accident you can find some of the really good murals in hidden parking lots, behind industrial buildings or just somewhere in a byroad in the middle of the city center. You just have to know where these streetartworks are and our skillful guide leaded us targeted through the city jungle. As well it is an interesting addition to get background information about the artists, the scene and the paintings you see while checking out the artworks.

For many especially from the older generation graffiti, streetart, murals, wallpaintings and tags are just all the same. But actually only the words, they mostly just only know about written mutilations and some crap gibberish by some marker on their door. Mostly this is really just crap. But in Sofia there developed a streetart scene during the last years very quickly, many artists became better after a while and did bigger and more official projects. With enough time and no stress of running from the police, they could make much nicer and bigger murals. Artists became more famous and streetart more suitable for the city face and society in Sofia. Over all there is not much money for refreshing the infrastructure and everybody is kind of sick and tired of the existing grey Eastern Block scenery. The colorful beautifications are getting increasingly integrated into the cityscape. 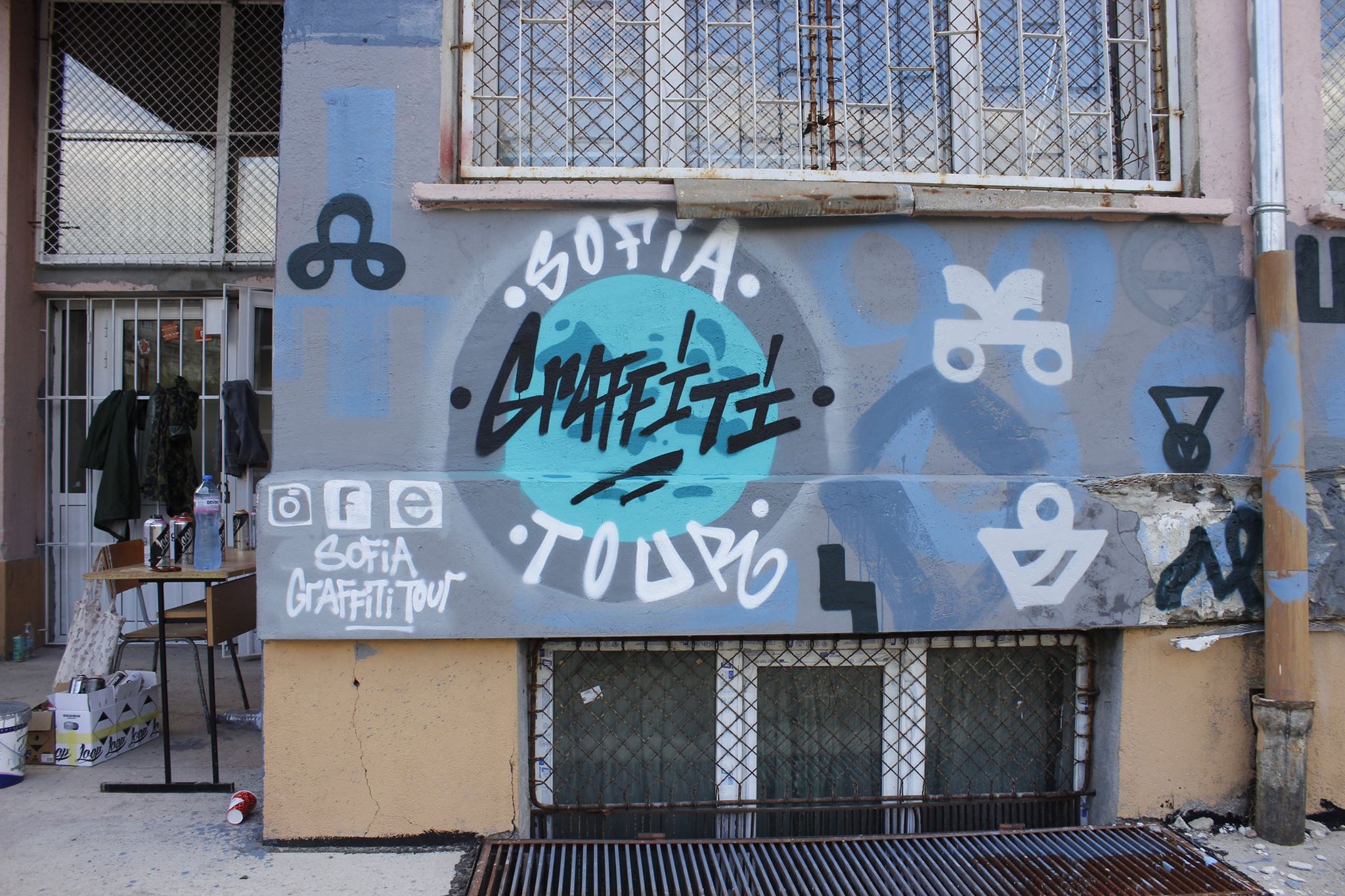 Niki Borisov told us about the „Kings“ and the „Toys“, means the old-established and experienced compared to the starting freshmen. How good each one actually is would be a different question, but it´s for sure that you have to earn the reputation of a „King” first. You have to prove yourself on the street. Vapski for example is one of THE luminaries and „Kings” from the scene, who is painting since a very long time. When others did a huge mural project on Maria Luize Boulevard right next to the metro station Serdika they didn´t ask him for taking part. Between the city signs the Eagle, the Lion and the Queen Vapski just stamped afterwards like a „King” his „Vapski” mark. For somebody who was part of building up the local graffiti culture on the ground everybody is a „Toy” in the end.

On our streetart excursion we passed as well a building on Ivan Vazov Street, which was completely covered with a huge mural with graffiti and characters by the 140 IDEAS Crew. The theme was the reading boy and the fable of the fox and the raven. Included in the painting there is as well the great book of the „Kings“ and the „Toys“. Amazing! 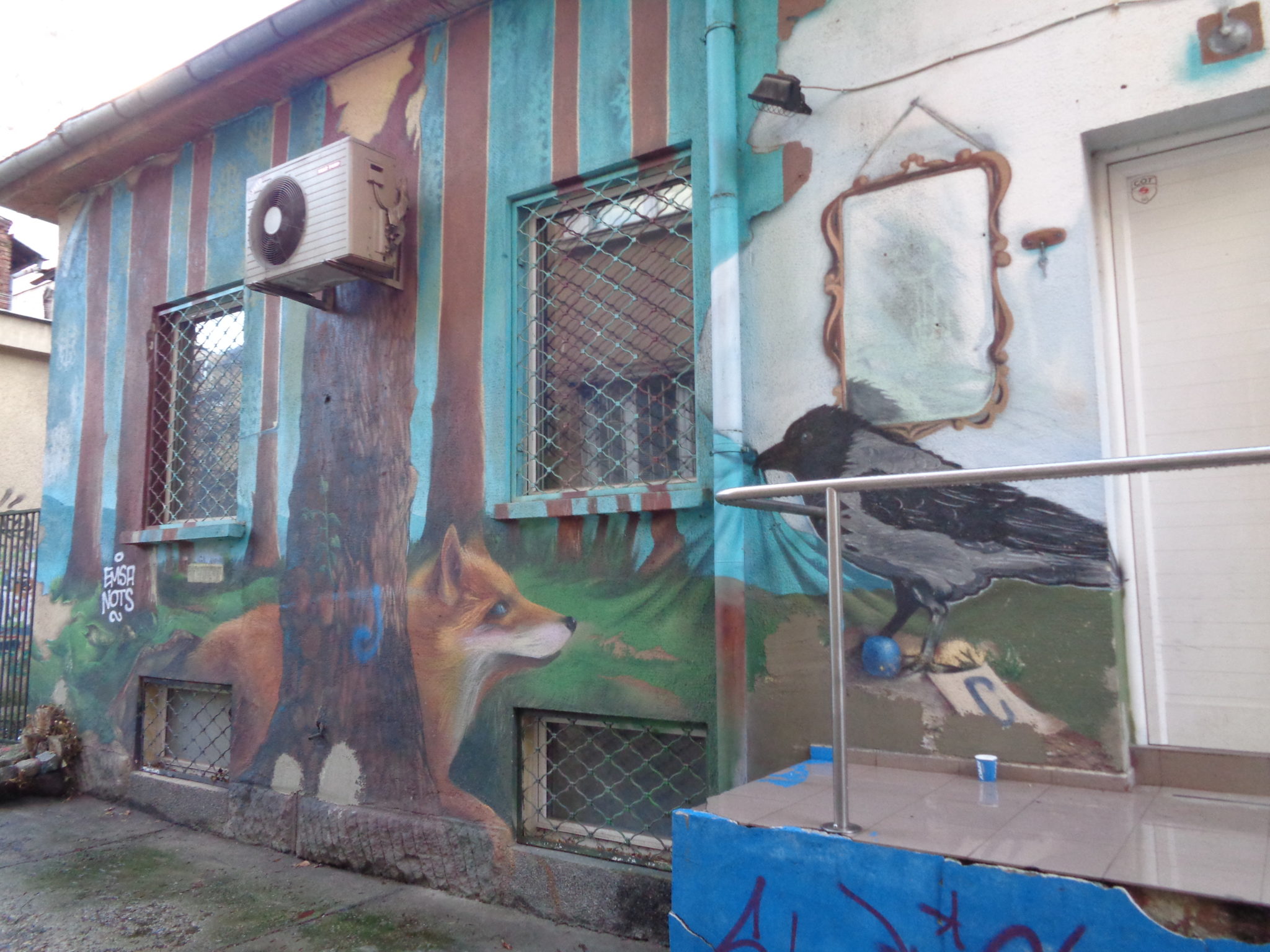 Some quintessence is as well to look more closely and think more about what you see. In many artworks you can observe and read some message behind, even if it´s just the fact to show you that there could be different perspectives on situations, life and anything at all except the ones you just know. Graffit and streetart is an important factor of an selfdiscovery and identification process of Sofia in the 21 century after the long gone repression of the communism but facing the new and more different problems of consumption in the capitalistic world. Niki Borisov tells us in an interview more about the streetart history of his hometown, the different artists and the graffiti scene in Sofia.

A week ago Sofia´s sprayers finished a new mural in the Graf Ignatiev Street. Here are some making of photographs from the Sofia Graffiti Tour: 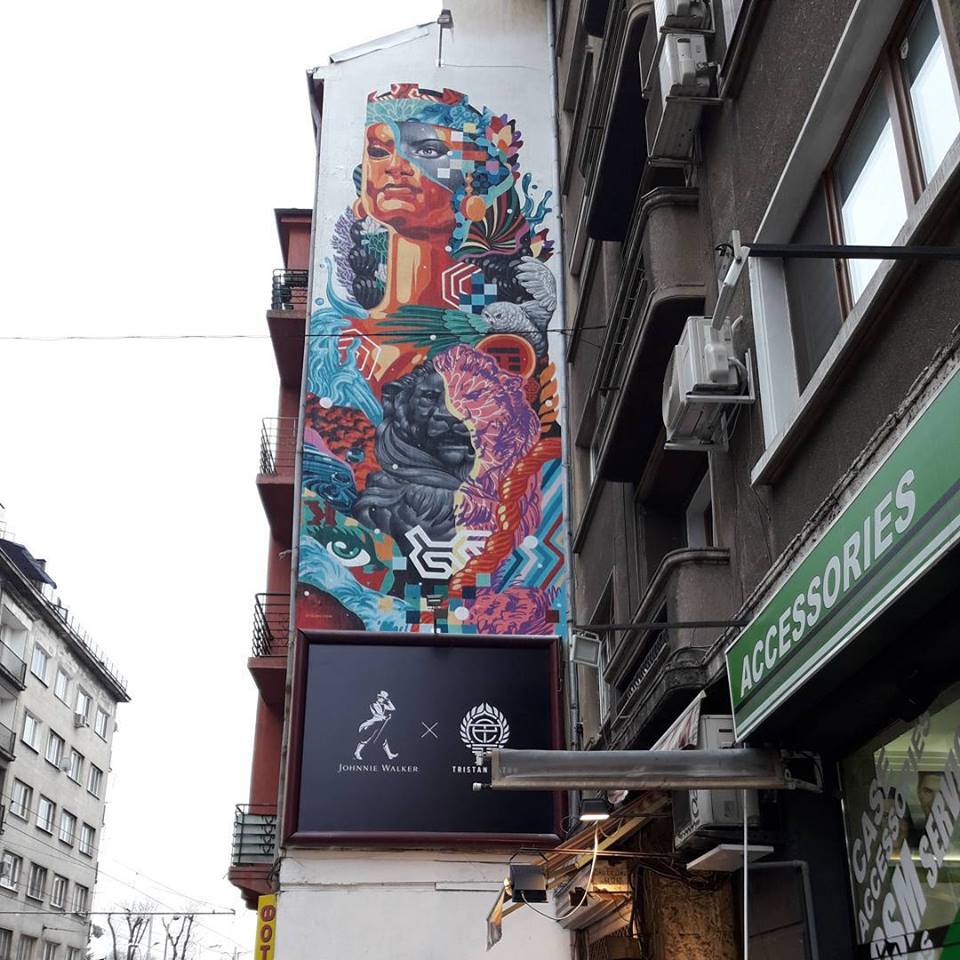 In another collaborative project several artists painted the electricity boxes and the zebra crossings in Rakovski Street and in Shishman Street. The sprayer FARS started the idea in the Bulgarian city of Varna at the Black Sea some years ago very successfully and brought it to the capital. Especially because a lot of the facade is still grey and drab these little painted dots and mini artworks attract therefore much more attention. We collected some more „recurring” signs, logos or art objects. The electricity boxes, the zebras and the door have been there before and just got creatively changed. The syringe, the skateboard and the dude with the hair are individual artists. 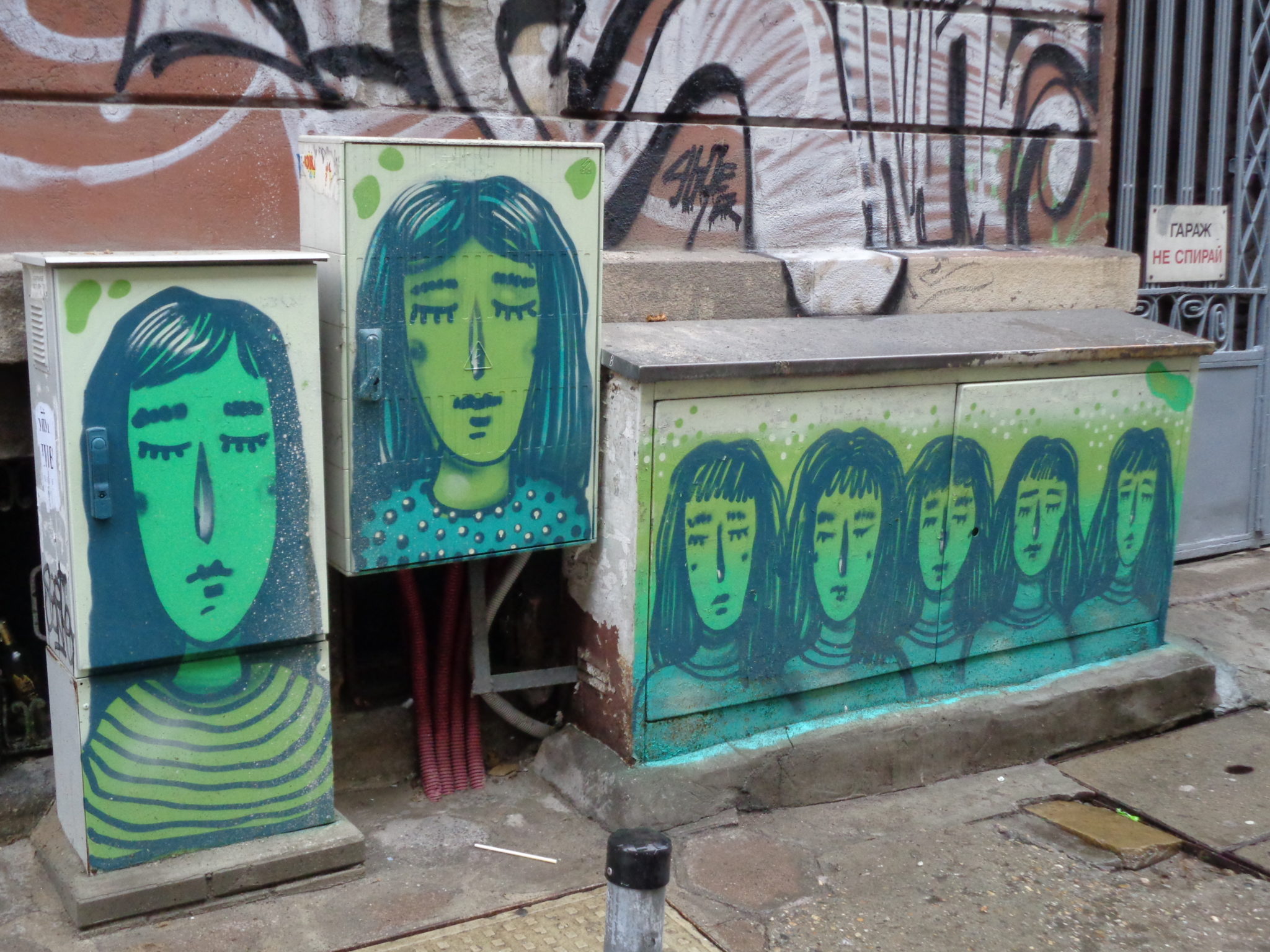