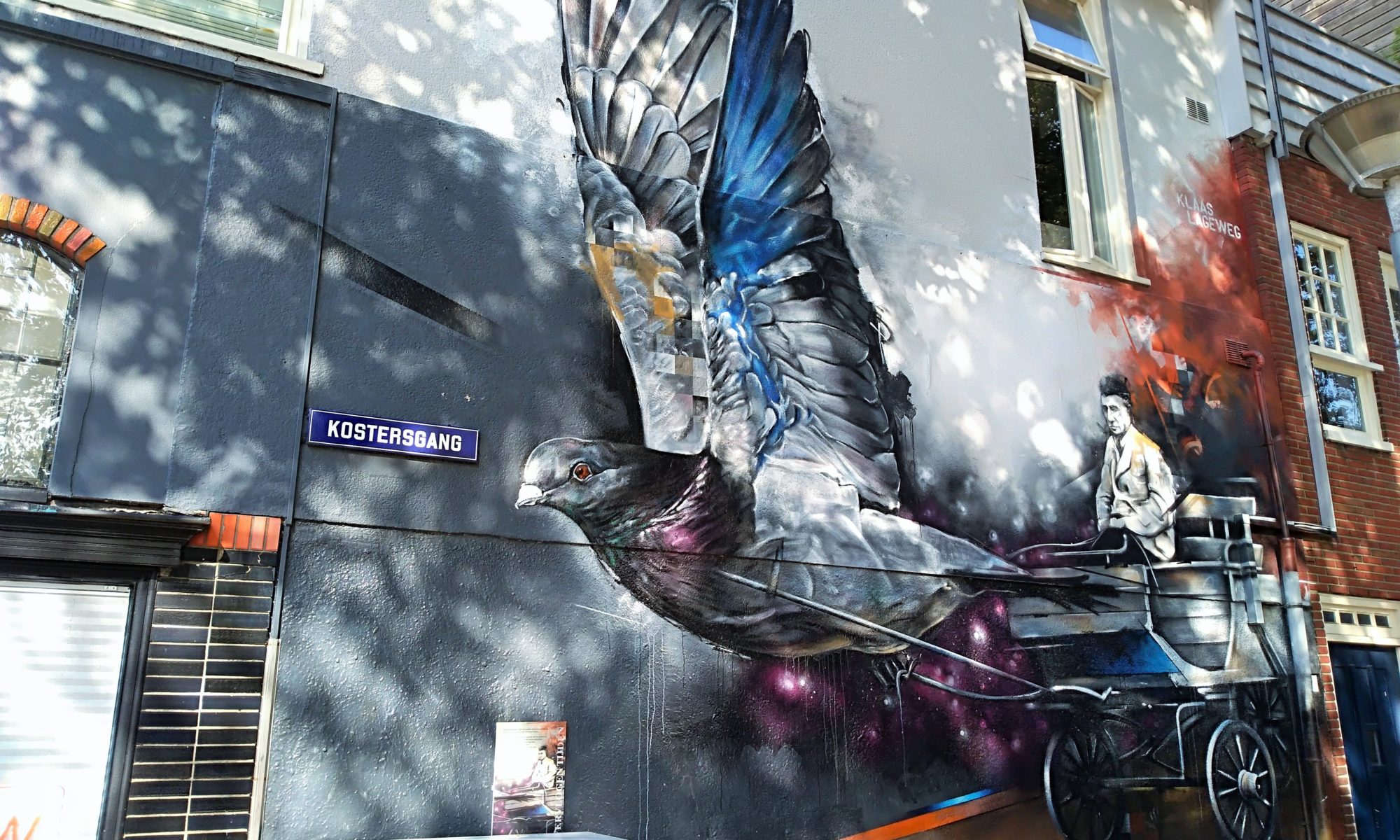 About 230,000 people live in Groningen and about 50,000 of them are enrolled students, that´s more than 20% oft the population. The city is accordingly young, multicultural, colourful and just very much filled with a lot of life. Historically this is because Groningen has had a university since 1614. In 2014, the university celebrated its 400th birthday. Really not so bad! The student scene definitely shapes the cityscape extremely. Everywhere in cafes and bars, on the canals, the students flits off unabashedly and casually. The cityscape is characterized by buildings in brick Gothic, the striking Gothic church „Martini Toren” built in 1220 and the university. Around the „Grote Markt” which means marketplace there are also wonderful old buildings.

Classic for Holland is the city center surrounded by canals. Dutch cities are built close to the water, but that doesn’t mean that Dutch people cry quickly and are sad. That’s not what I want to say. Rather, the water serves as a transport route and Dutch people are also known for their open nature. Groningen’s important waterways include “Heresingel”, “Westerwijtwerdermaar” and “Reitdiep” which surround the ancient centre. Groningen also has many beautiful green areas. One of the best-known is Sterrebos in the Helpman-Oost district. There, mainly southern plants are cultivated and occasionally gnomes and trolls carved out of wood greet the returning people. Another interesting building is the “Mesdagkliniek”. This strangely but as well quite super interesting forensic-psychiatric facility for prisoners near the “Sterrebos” was built in eclectic style. It´s just an impressive monument you wouldn´t forget. Like a brute, insurmountable fortress, the “Mesdagkliniek” stands like a rock in the surf. That makes the city incredibly attractive, except maybe for the inmates. 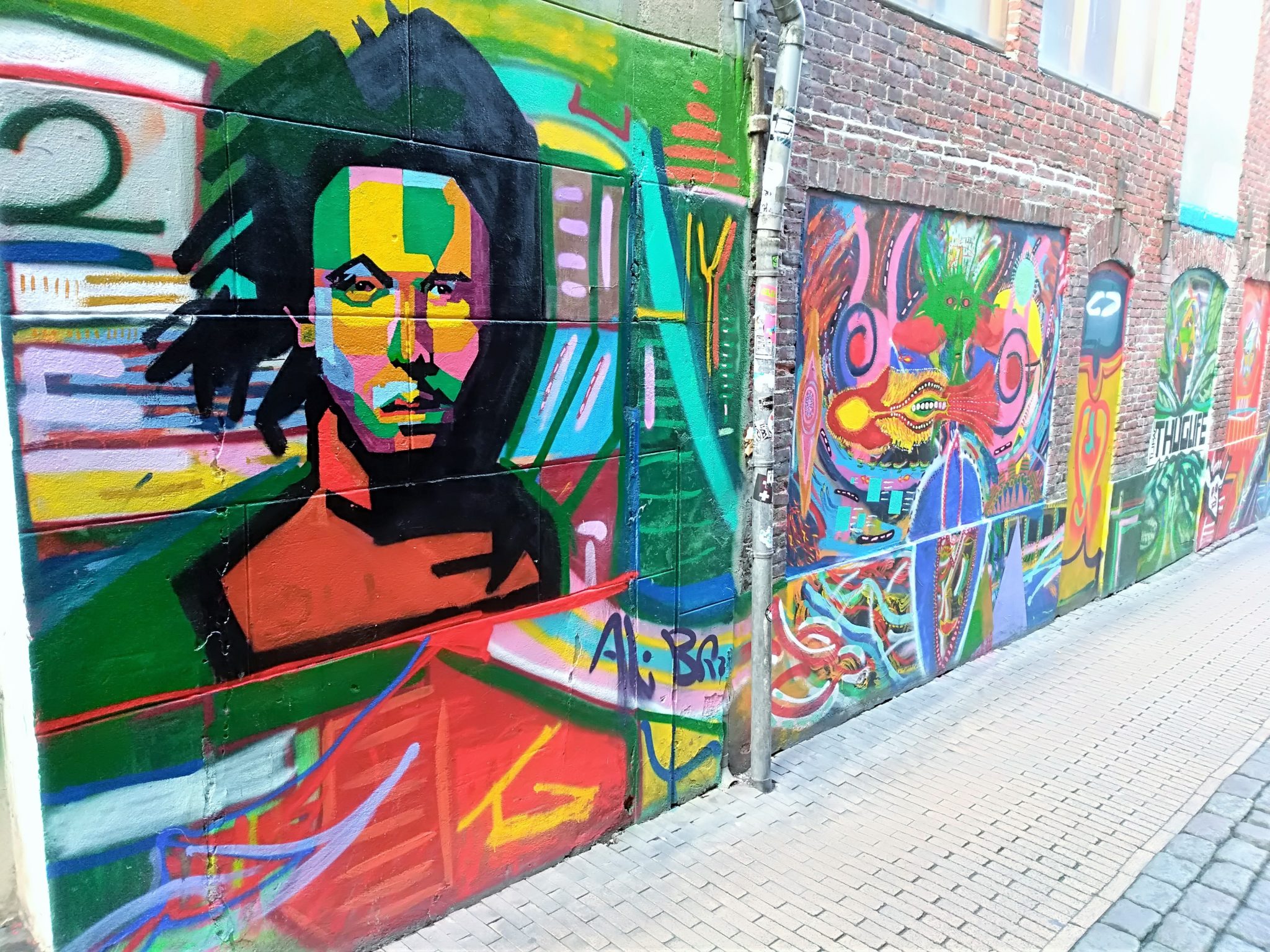 There is a lot of cycling in Holland, which is known all over the world. Therefore, no beer should be drunk while walking. That would be grossly negligent, otherwise you get under the wheels quickly. I once experienced in Amsterdam that a good friend told a story in a very gestural way. With an arm movement, he has then completely cleared a bicycle driver from the bicycle. In wrestling, that would have been a lightning-clean „close-line“. Luckily nothing happened to the cyclist and she got away with the horror. Of course, it could have been the other way around. Being run over by a bicycle hurts terribly, that’s clear.  Therefore caution should be paramount in road traffic. That means you drink your Brouwers either at home or in a restaurant. This would be extremely useful if you do not want any trouble, as drinking is also prohibited in some Dutch cities in zones and it is not always clear to travellers what the legal situation is. Unfortunately we had to find out for ourselves during another trip to Leeuwarden. 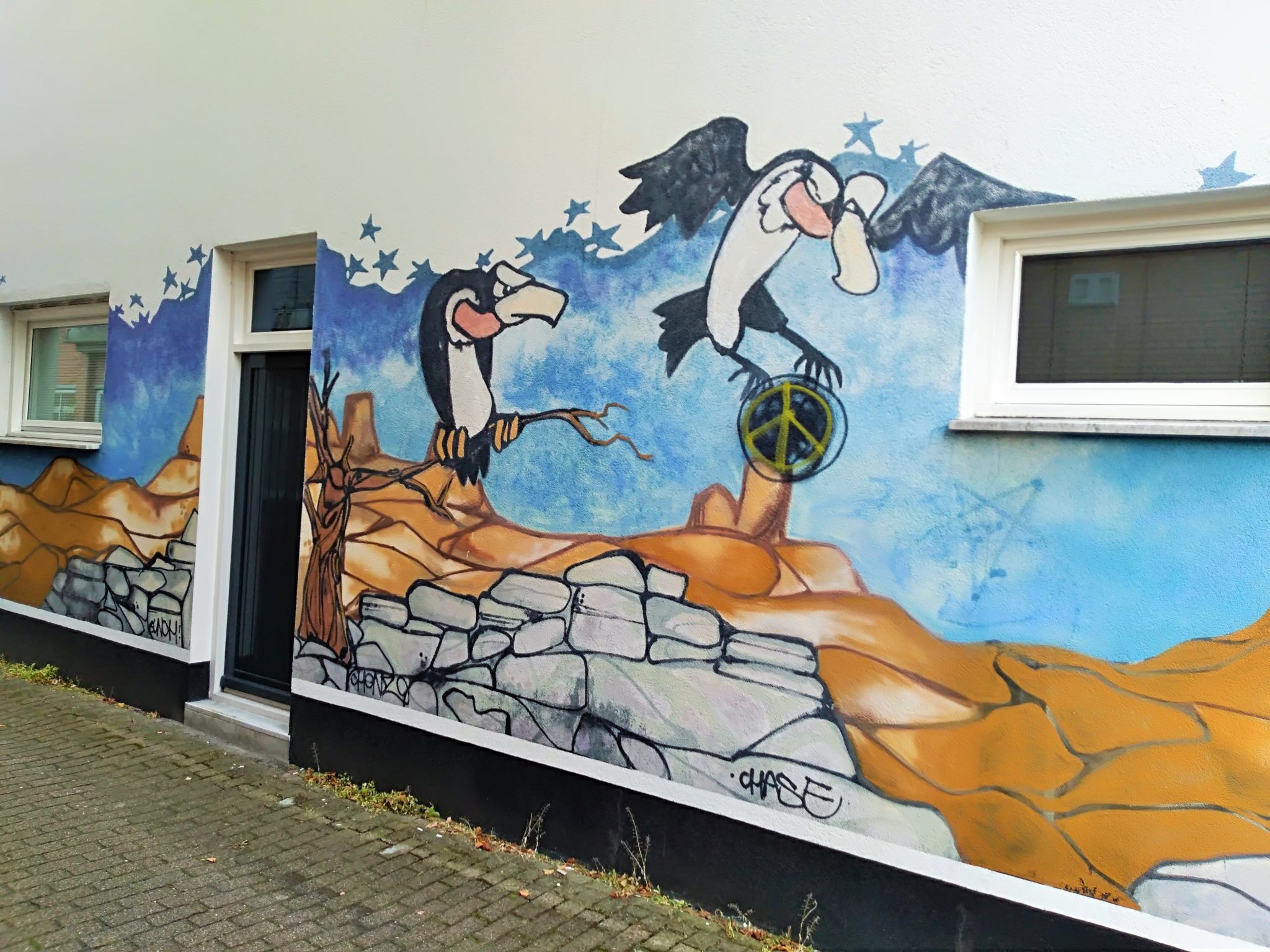 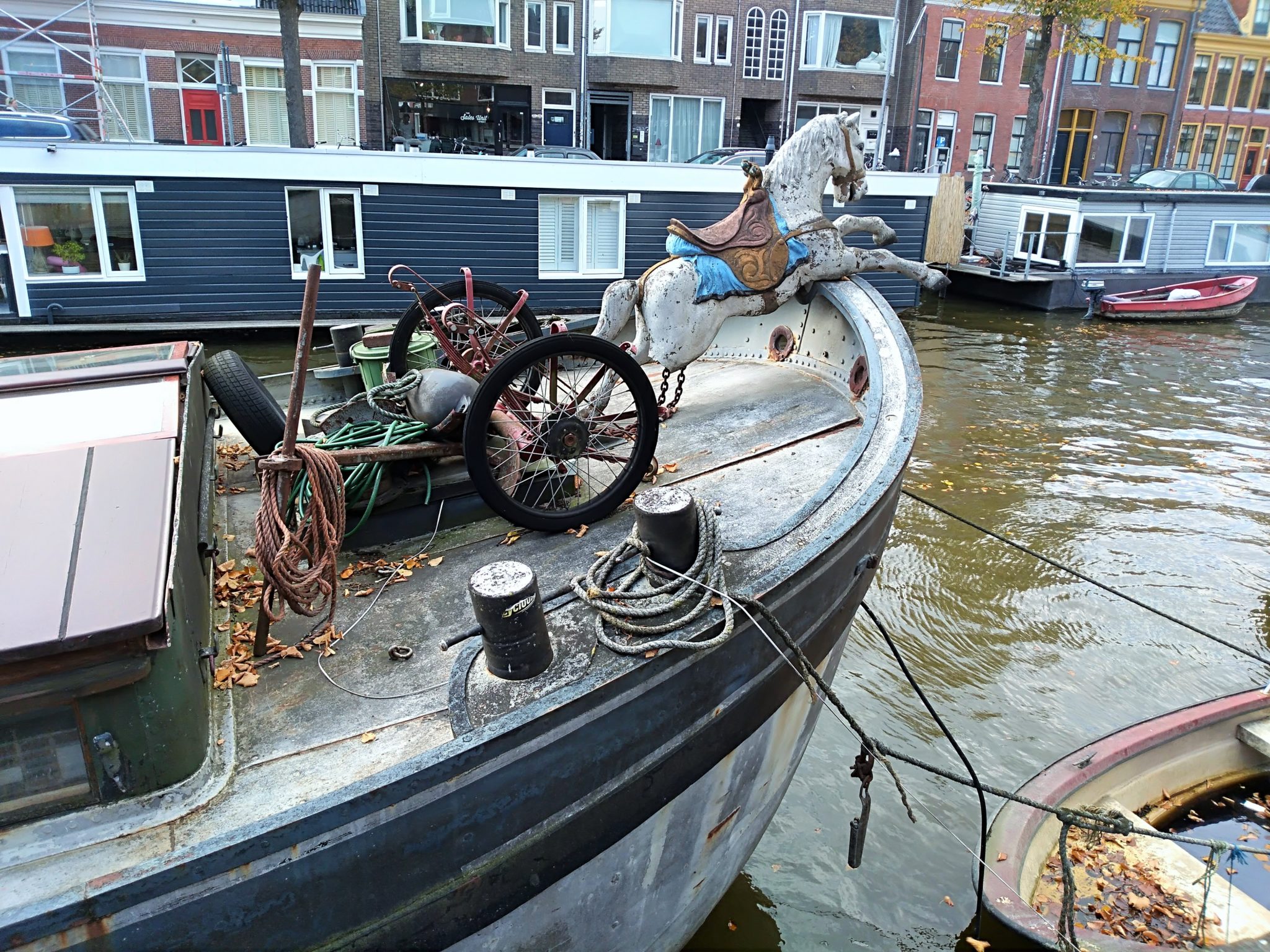 Groningen is in sixth place in the European comparison as far as the use of cycling routes in general is concerned. The inhabitants of Groningen love their bicycle, which is quite noticeable in the city centre. With a proud 31% for routes, Groningen ranks behind Houten in the Netherlands (44%), Oldenburg in Germany (43%), Münster in Germany (38%), Copenhagen in Denmark (35%) or Leiden in the Netherlands (33%). There is really a lot of bicycle traffic. Therefore it is best to borrow your own bicycle to exlplore the city. However, the network of buses is also excellently developed. 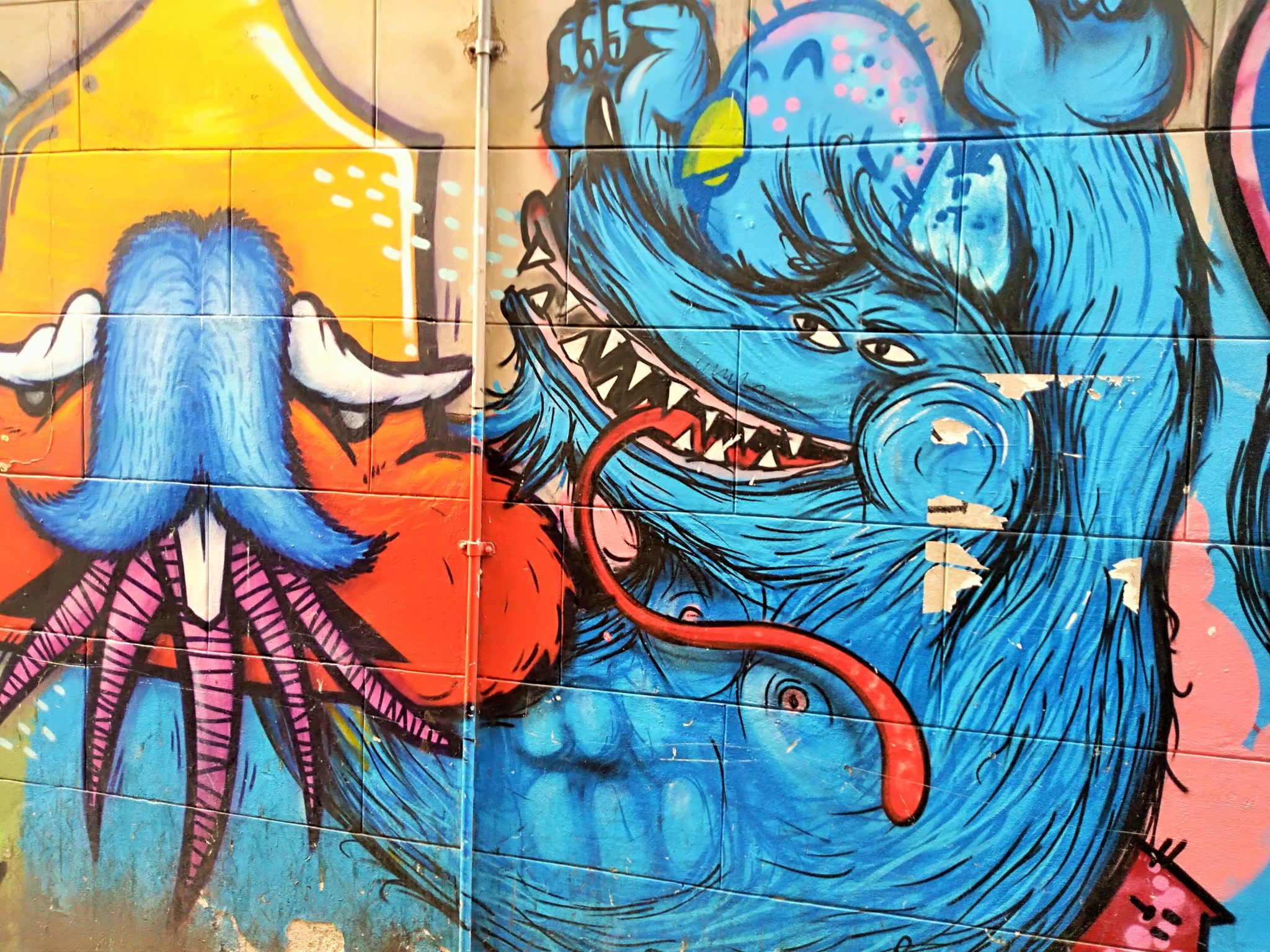 Culture is also offered in the city a lot. Because of the large number of young people, there is a very intact night scene here. I was after seven days traveling too burnt out for a proper party, but a good friend from Hamburg always told me about the nightlife in Groningen. He had his girlfriend there for years, who of course also studied in Groningen. The „Oost”; or the nightclub „Paradigm” he had strongly recommended to me for extensive techno nights. In addition Groningen has a very interesting bar scene. Celebrations can be held here for days and nights. That’s a great thing! Successful outdoor raves take place here several times a year, such as the fantastic Paradigm Festival. Certainly a worthwhile thing that I will see for myself on occasion. In any case, the fabulous Brouwers Beer is secured here, so you definitely don’t have to worry about that. 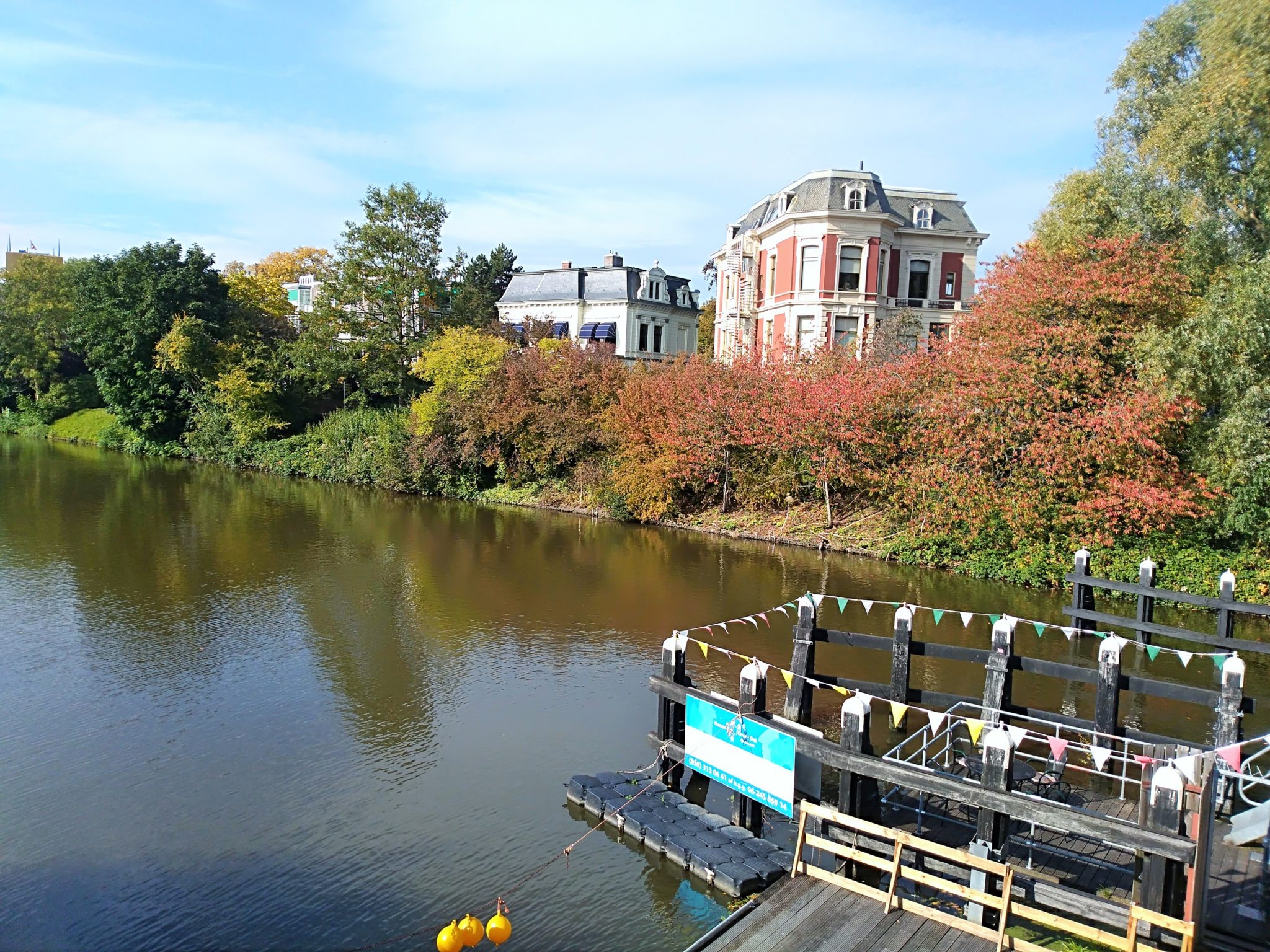 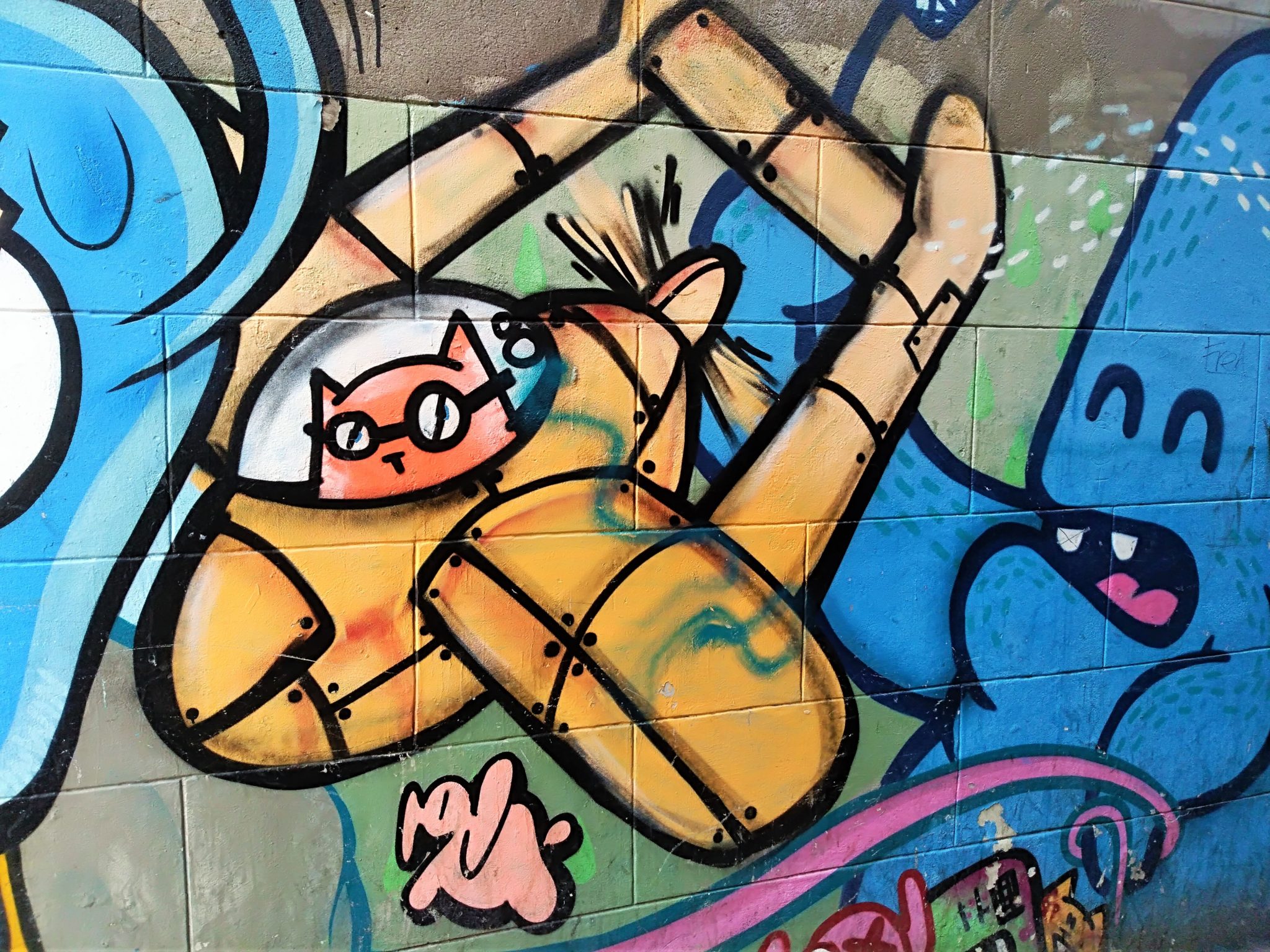 When it comes to art, there is no way around KLAAS LAGEWEG. The local artist simply visualizes horny things. I’m a big fan of his murals and illustrations. Absolutely brilliant stuff! I always rave when I see his paintings! Especially the wildlife thematic seems to have liked KLAAS LAGEWEG, the wildlife did it to him. And KLAAS LAGEWEG did it to me. That’s how the circle closes. It’s a pretty simple calculation. Art and impulses, creativity and impressions! Wonderful! Especially in the city center there is the spot at Rademarkt 12 of the „Vervlogen Tijden“. Absolutely worth seeing! It´s still feeling like I was standing a whole day in front of it and couldn’t get out of the amazement. The artist is a definitely a great one and omnipresent in many corners. In Groningen there is also a special feature which I have not yet been able to observe in any other cities: The super nice and colourful roll containers in which flowers and bushes are laid out! They’re also quite very interesting. In other cities, these objects are mostly power boxes. The roll containers definitely have a lot of charm, look good and green the city in addition. Great idea!

There is also a great spot in the Papengang. There unknown artists have depicted American rappers. The wall is rounded off by MEEERBEEER alias Rens von den Berge. Definitely worth seeing and interesting. KLAAS BOTER WOLF also did some nice pieces there. I liked his Indian girl in comic style. In addition to regional and national artists, the rush of students also attracts international artists to Groningen. The Spanish street artist EDERU from the collective FATALE FAKE has also immortalized himself several times in the city area in a fabulous artful way. Hurray for the students, who make the city colourful and liveable and give Groningen an urban character! 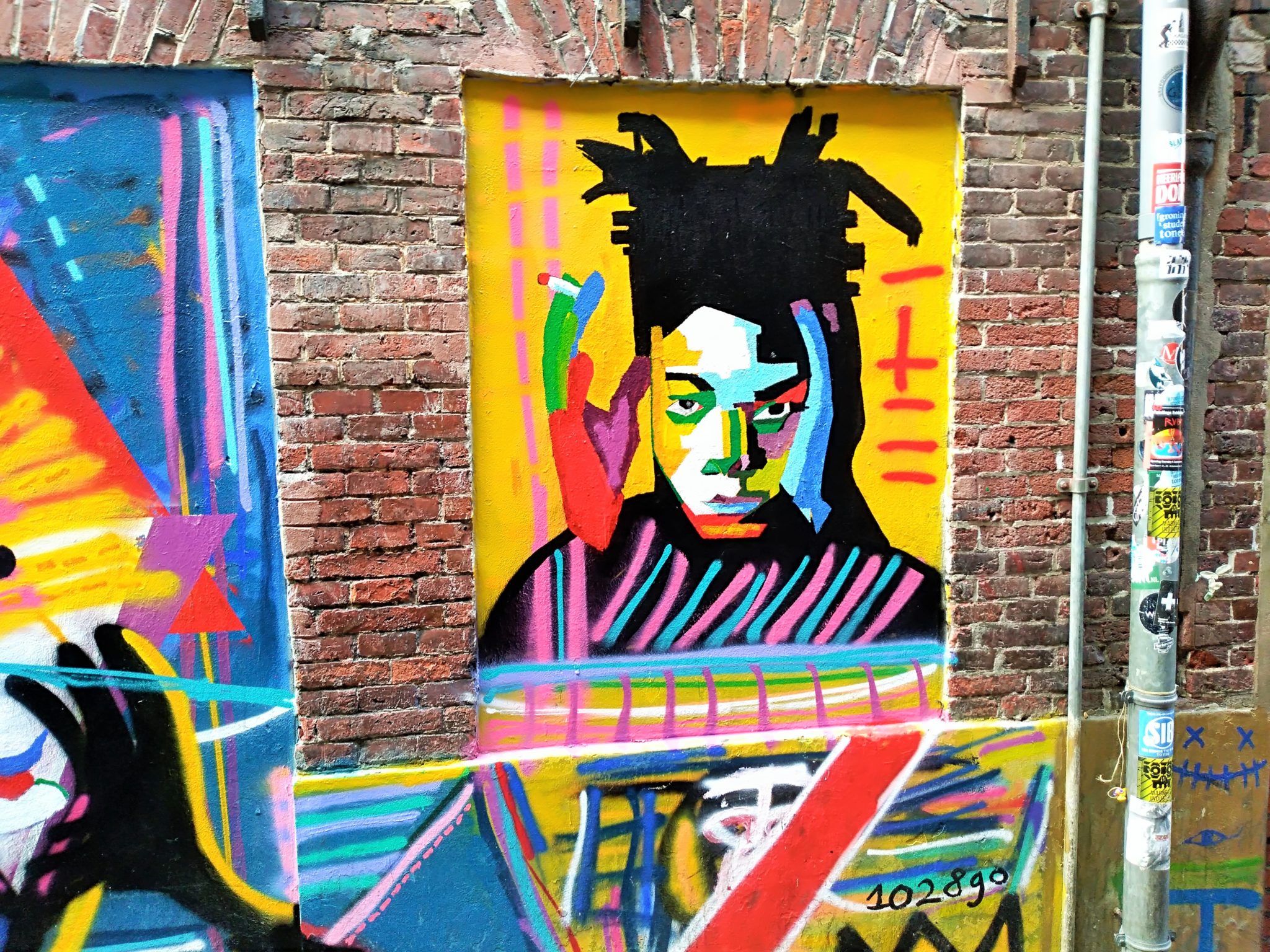 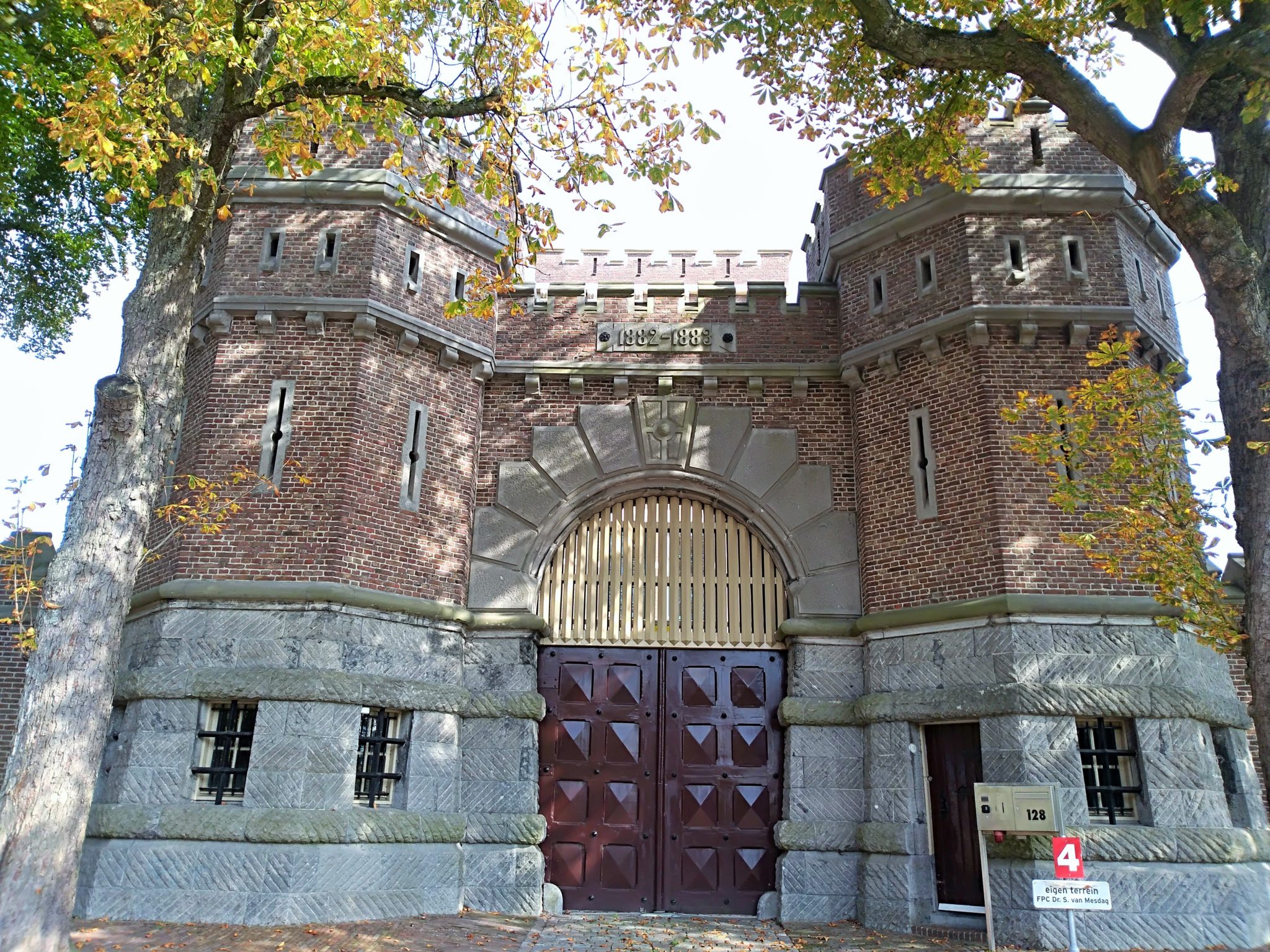 The „Joods Memorial” at „Sterrebos” is definitely as well worth mentioning. The Polish artist Edu Waskowsky, who lived in Groningen for many years, erected a monument to the Jews from Groningen who died during the Second World War. The hands that rise from the earth are over 25 meters long! The monument is still unfinished. Very impressive, strange and with a clear message. If you visit „Sterrebos” be sure to check it out. Groningen is for sure worth a visit on every trip to Holland! 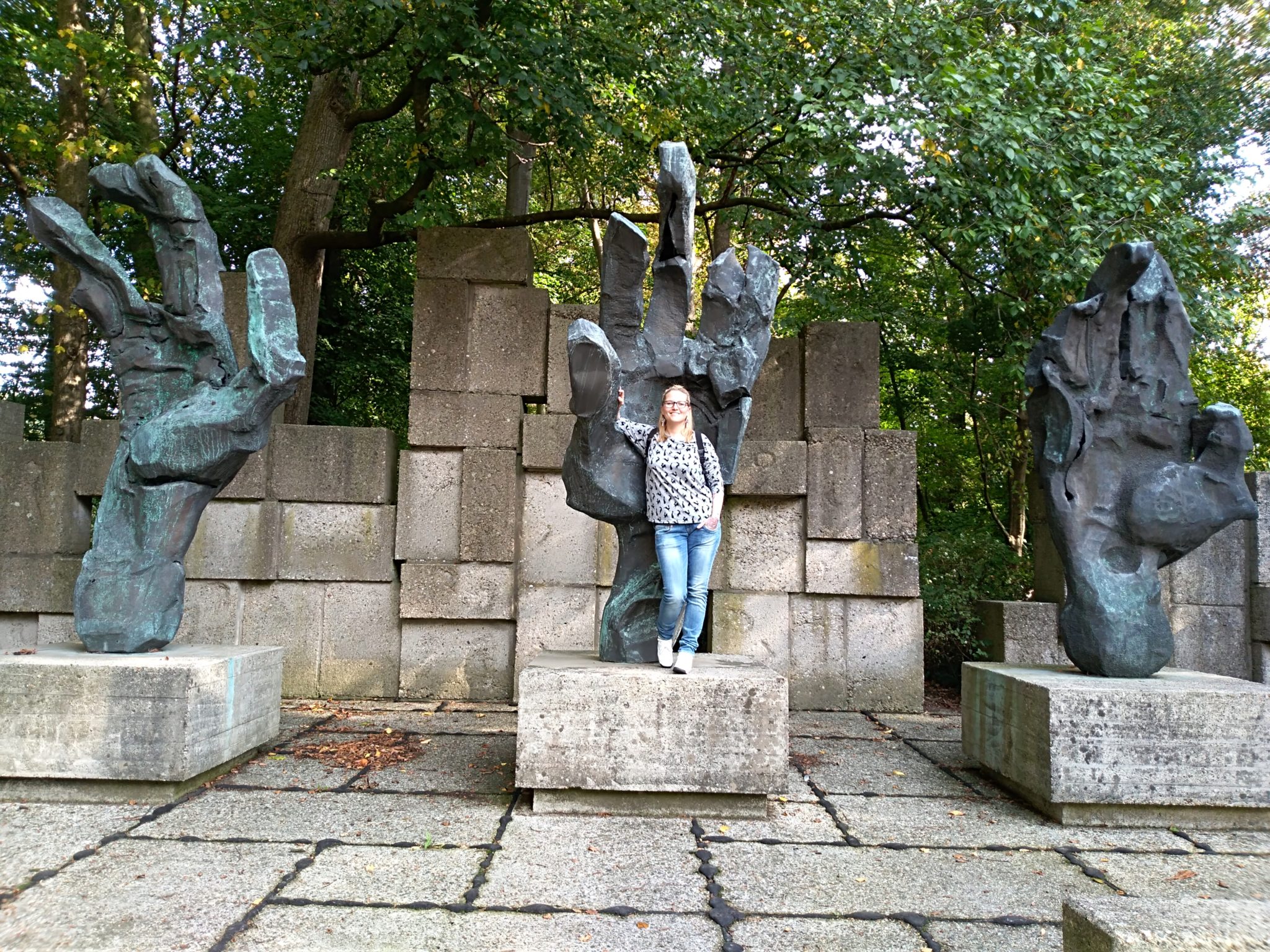 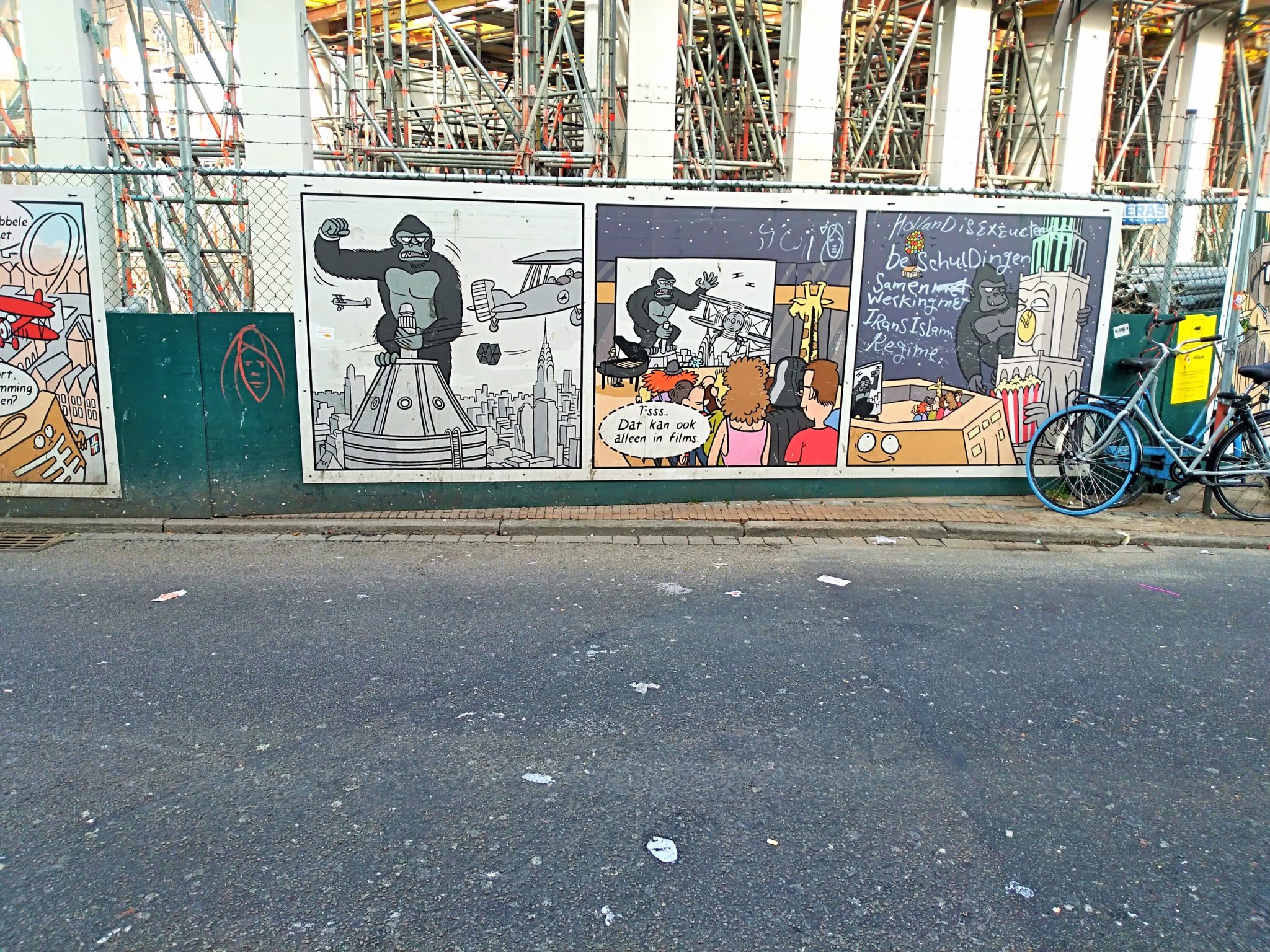 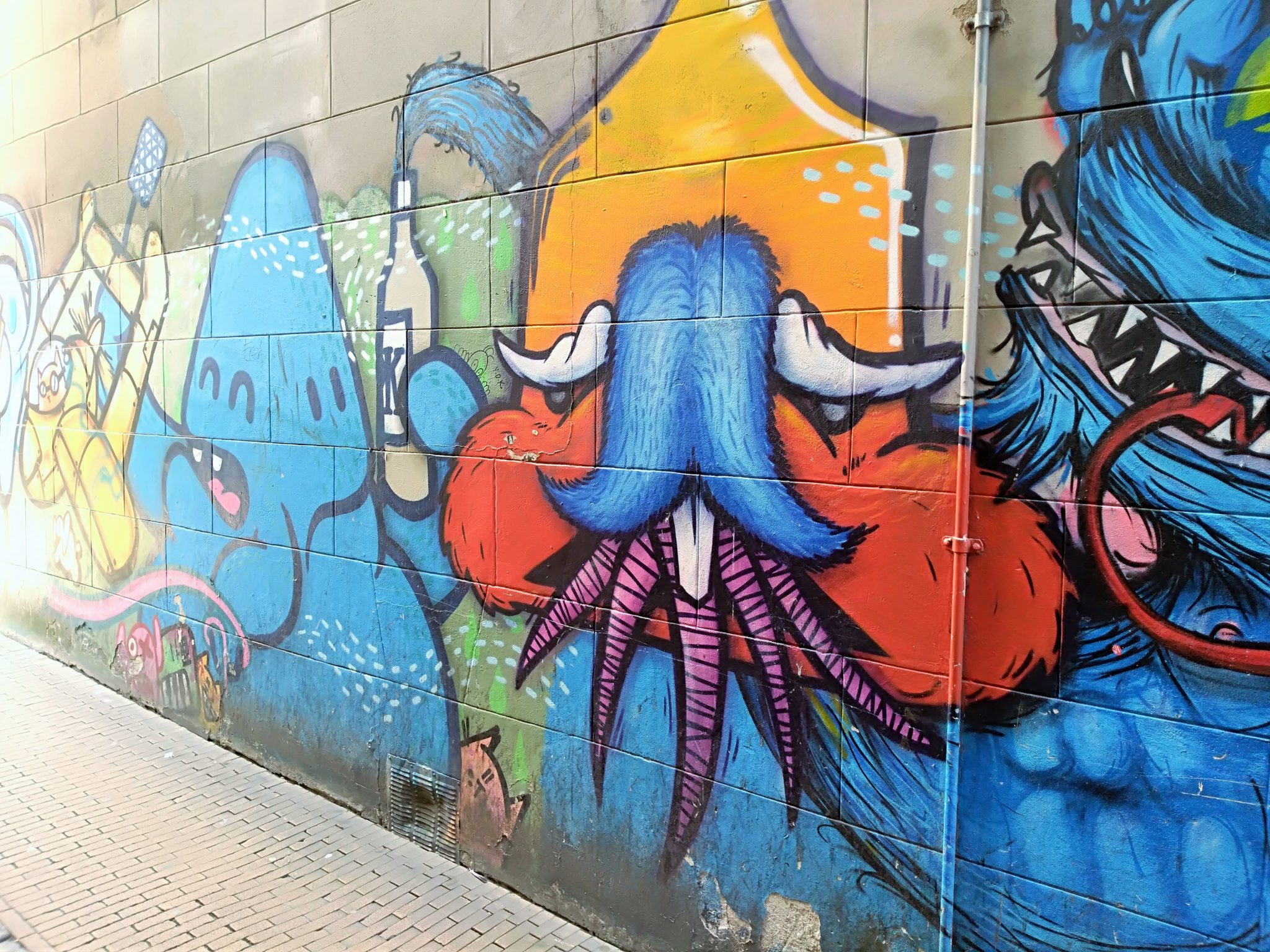 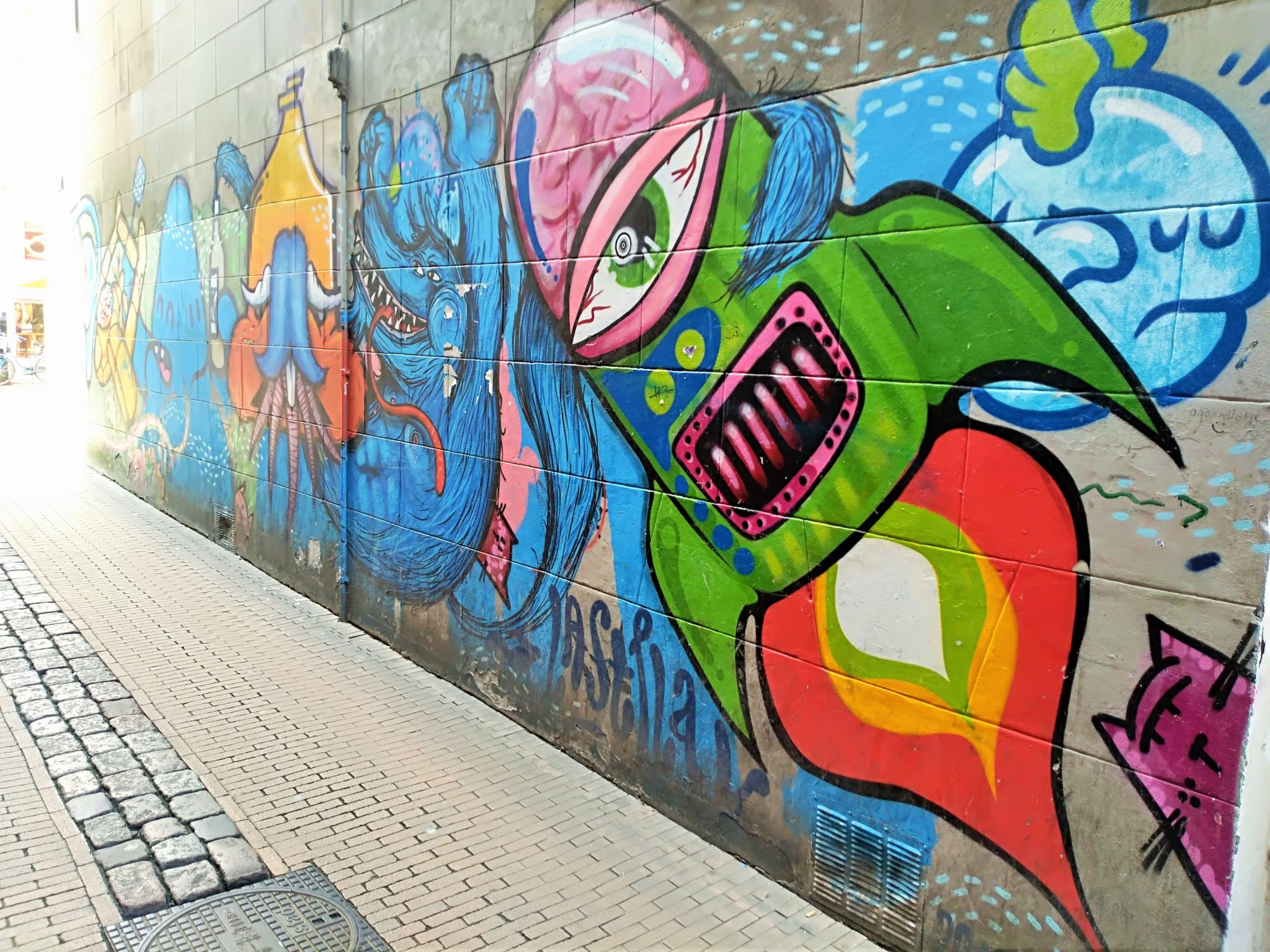 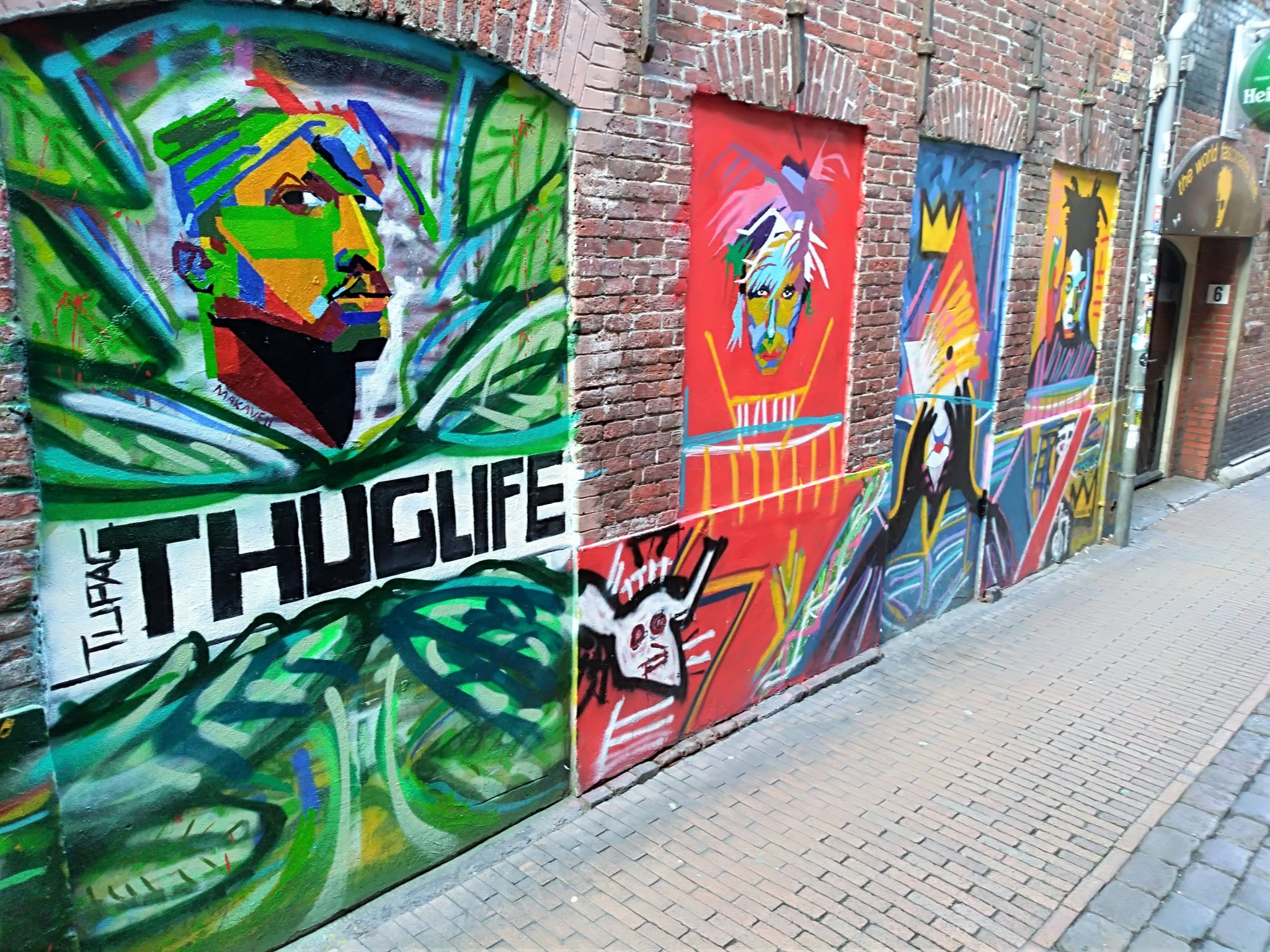 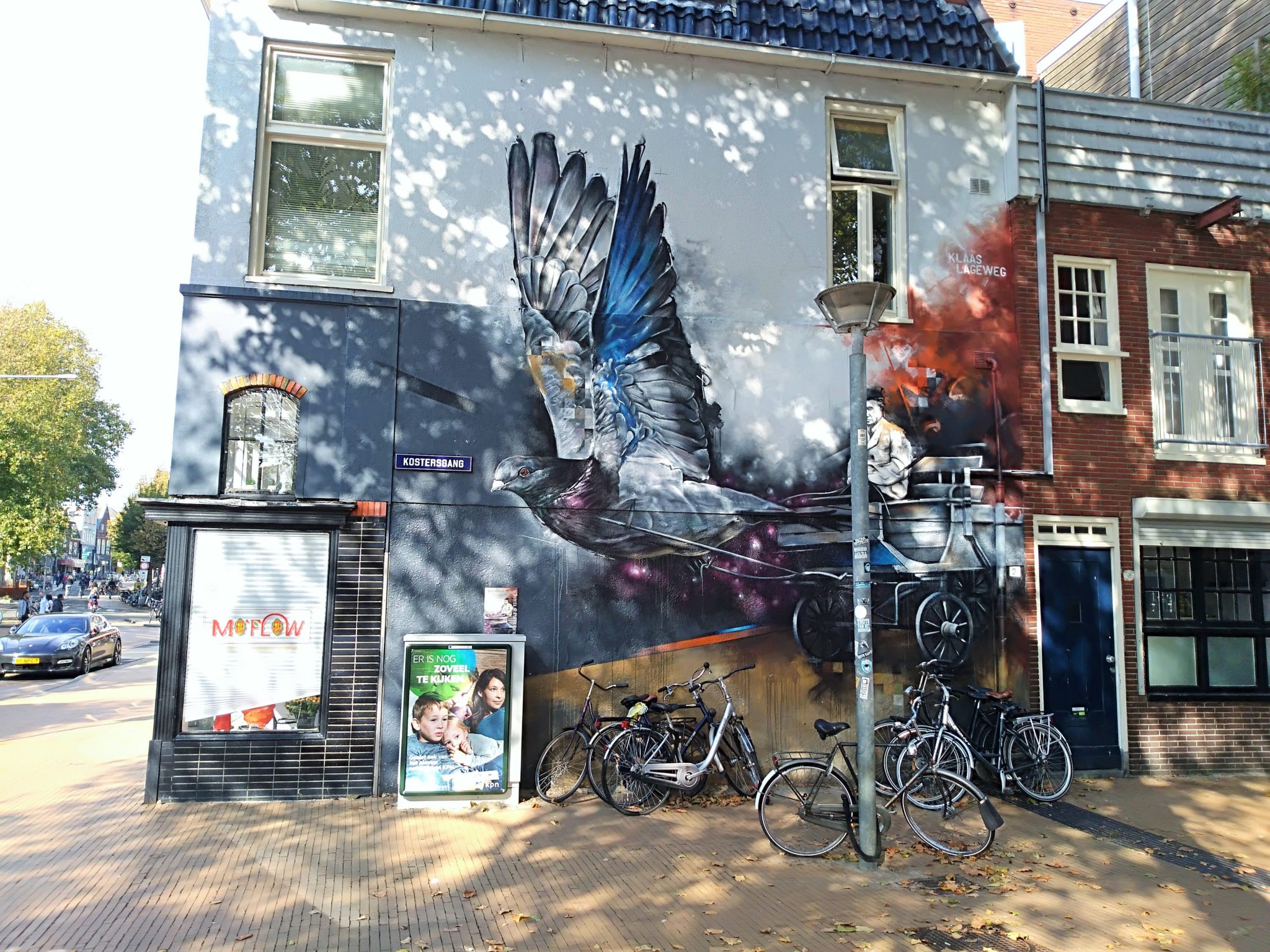