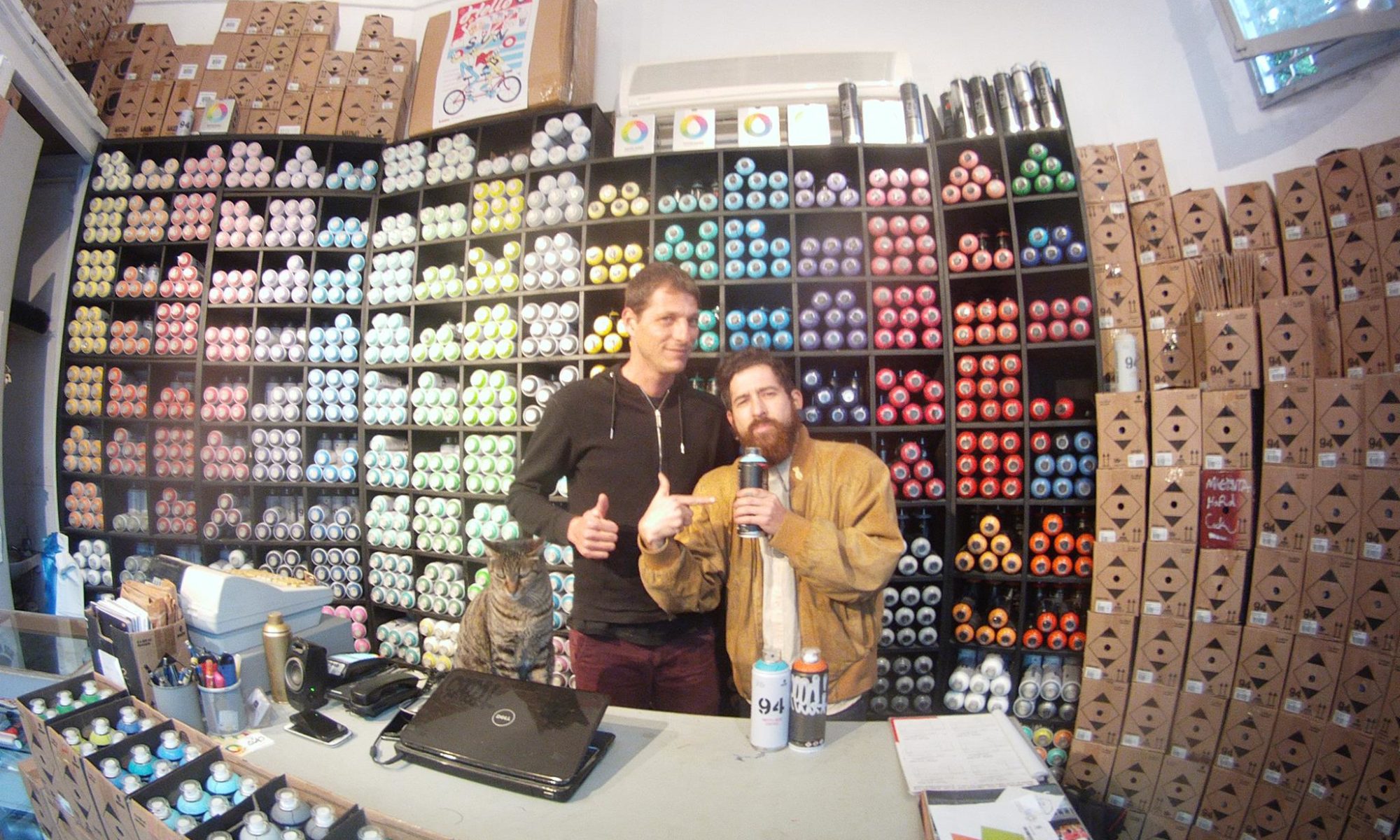 During our stay in Tel Aviv we surprisingly found out there exists a Montana Can Shop in town. Self-evidently that we visited that place. Lalo and Andrew run the can store named Capzoola since 2007 in the city center, on May 14th there will be the anniversary. With a lot of work and effort they made it that far and the shop is meanwhile a little institution if you need anything around paint and colors. In the beginning they started selling the cans from underneath the bed. More than a decade ago they opened the nice space in Geula Street 42, „zoola“ from Capzoola means „cool place to chill“ in Hebrew. In their assortment you can find anything about graffiti equipment what could be needed and the whole range of the 94ers. That´s THE series from Montana. High quality, the best you can get at the moment in 174 different colors. Andrew told us in an interview about the development of the shop and the streetart scene in Tel Aviv. The conversation is as well written down in the following part.

Hallo Andrew, so Capzoola opened in 2007?

Hey, yes, it was like around in 2007. It was kind of a very very new idea. In 2006 actually there were nothing on the street. Maybe just a handful of names. Maybe ten names were actually doing something here and there. Some small things. So it was kind of a big gamble. It´s quite an effort to stay open that long and to continue to grow. Yes, it´s an honor to make it this long.  I guess there were things, I mean, a small collection of people maybe doing a few things in the very late 90s. Like in 1998 and 1999 and 2000. But things didn´t really pick up until I would say maybe 2006 and 2007. Around 2007 things started picking up slightly and the pretty gained some popularity. And then around 2011 there was the peak. Around 2010 and 2011, these were really good times for Tel Aviv graffiti in terms of developing and new names and people did really put their work in. Things have kind of died down since then. The scene itself is kind of stunted, I feel like there is kind of a new wave of people. I am not speaking about graffiti but streetart. I feel they kind of get involved because of the money. Because they saw the popularity and then they just grabbed it to do things in the streets. Even if they don´t have any experience, but what so ever. They started doing things on the streets and it was a very easy shortcut to get to galleries. Something that happens all over the world that I have seen. A lot of people try just to hop on the band wagon. So I feel that this really destroyed any scene that really could have developed from like a pure ground. When you do something on the streets for six month and then you already getting exhibitions and being called a street artists. It´s not cool, it´s really backwards.

To have a good a development you need some obstacles in your way. It has to be a bit hard at first to challenge your skills.

There was a small group, maybe a collection of five or six people. For example NO HOPE is really well-known for his work. CLONE, ZERO SONS, there was FOMA, BROCKEN FINGERS CREW. These were the real people from the beginning that were really making waves. And really doing something here. There is also a descendant who have been around forever and is doing really small stencils. He is definitely around for really a long time. Since the early 2000s.

What kind of artwork can you find around here in the streets?

There are a lot of different things. If you search a little bit you can find CLONE. It´s one of the most active and one of the oldest ones. He is still active today. Unlike a lot of the others who started in the beginning.

This is a country with so many political issue problems. So can you find more messages here in the graffiti and the writing?

It depends. I feel like most of the stuff from the street is really just bullshit. Most of it is just trash. I don´t think it is a lot political. I think quite the opposite. A lot of people stay away from the political stuff and when they do get there it´s that the people and the rest of the scene isn´t interested. It´s not about politics, it´s not about which side is right or wrong. It´s about expressing yourself. You know, if you feel strongly about those ideals, so go for it and incorporate that into a word. But I haven´t seen too much to be honest. And the ones that I have seen, well. I think a lot of people want to read into it, and a lot of people want to read there something in it, like ah, this is because of the conflict. But you know, most creators create things based of their experiences and their surroundings. They are effected by their environment to a certain extent. But I think not a lot of people are really into that. I don´t see a lot of political stuff. There are really small non relevant stencil somewhere in a corner in Florentine. But the people who are actually really active don´t touch on that.

What´s about the police and sanctions or prosecutions. How is it around here?

No, thinks are pretty easy around here. I think if you don´t run you won´t get arrested as long as you do an artwork. Not just tagging. If you didn´t tag or did some strong vandalism you have the strong possibility not getting arrested. But there is as well not really any problem when getting arrested. It´s more or less just a slap on the wrist. They send you on your way. There is no vandal squad. They are aware of it, but they don´t really know about it. And when they see you are doing art and they know how to digest it because they are different thinking people, so if they something that they don´t understand they are not going to react either way. They are just telling you to stop. Don´t continue. The used to buff a lot more. They used to buff constantly in the city in the beginning. But now they really really relaxed and the government started kind of making money with it. They started tours for streetart. So the government is actually catching them on another level and is capitalizing on it. They have erased some really amazing classic pieces that have been done here when there was a lot more activity. Now there is less activity, they don´t erase them at all.

When I was walking through Florentin along the very nice artworks, I have seen three tours and each tours had about 20 or 30 participants. In the internet I saw as well you can book a tour for 50 Dollars, so it´s a popular venue.

Yes, which is kind of funny. Because you know, coming from here and knowing all the faces and all the people and knowing all their work. I think that it´s really really boring. I don´t think that there is so much getting done. But it´s really top quality work. Very few people are putting in new work. There is a lot of interesting things, but a lot of things you are probably seeing are as well from tourists who are coming through and leaving their artwork. Which is great because it does add some diversity. But for me I have seen the same things over and over again. It´s a bit redundant and a bit boring. Whenever I travel I get a lot more excited because it´s fresh. So I think my opinion is a bit biased. I really want to see some amazing stuff being produced in the city and I wait for it. There are a few pieces being put up by FAIL from New York recently. It´s nice to see figures from New York coming here and putting things on. Kyron Harrington was here and he did a couple of things. Really amazing artists have come through. It opens it up a little bit. JUST from Berlin. Graffiti wide he really changed the scene here in Tel Aviv, he really changed it. A lot more roller pieces started popping up all over the city. There is a different way of looking on Tel Aviv after he came through.

So where are you actually from?

I am from the States originally but I have been here forever. It´s my home. You know, I get bored, but I think that´s when you realize that you really at home. When you are totally bored and you need a vacation. Once a year.

Your shop colleague Lalo, is he in graffiti as well?

He kind of comes from the oldschool skateboarding scene here in Israel. He was doing graffiti and was always inspired by graffiti and streetart. He was doing a lot in Amsterdam where he lived for seven years. Then he came back to Tel Aviv with the idea to open up a spray shop. So he started importing Montana Cans and sold them out under his bed at his parents’ house until he eventually opened up the shop here in 2007. In 2017 it was the 10th anniversary and we are really proud of that. Especially because it all started from under the bed. Yes, selling the paint from underneath the bed. We came a long way and we have seen a lot. But Lalo is really an important reason why things the way they are here. He is really important and kind of an oldschool figure in Tel Aviv. Everybody knows him, everybody loves him. He´s the man, he is my brother. I´m really proud and happy that we can run the shop together.

Which cans and equipment do have in your shop?

For us, for me, this is the best one. The hard core, which is standard classic, but the 94 is really good. It´s the best paint I´ve ever worked with and a lot of our clients. They say the same thing. It´s super high quality and we always try to bring different things and bring up a wider color range and people started to get to used to 170 cans for choosing. These days a lot of people are coming and using our paint for redecorating or painting furniture. It´s not just the graff kids. It´s not just the streetart kids and the designers or the students. It´s people who want to paint a cabin and give it new life. Because the scene is so small our clientele here at the shop is a lot wider. We might have some little 13 year old kid and then a women that is 54 and wants to paint tires or make chairs or something like that. That´s kind of how things happen here at the shop. It was open for the kids and for graffiti, but in Tel Aviv everybody kind of learned about the shop. I think it is an institution at this point and after all these years.

If you need  color, you come to Capzoola.

Yes, you come here. That´s the idea. We usually have also T-Shirts from local brands likeTrash Addiction. SOMSENE is a local artists which we have some prints of. We want to give a little bit of the local flavor. The birthday of the shop is on May 14th and we celebrate it every year.