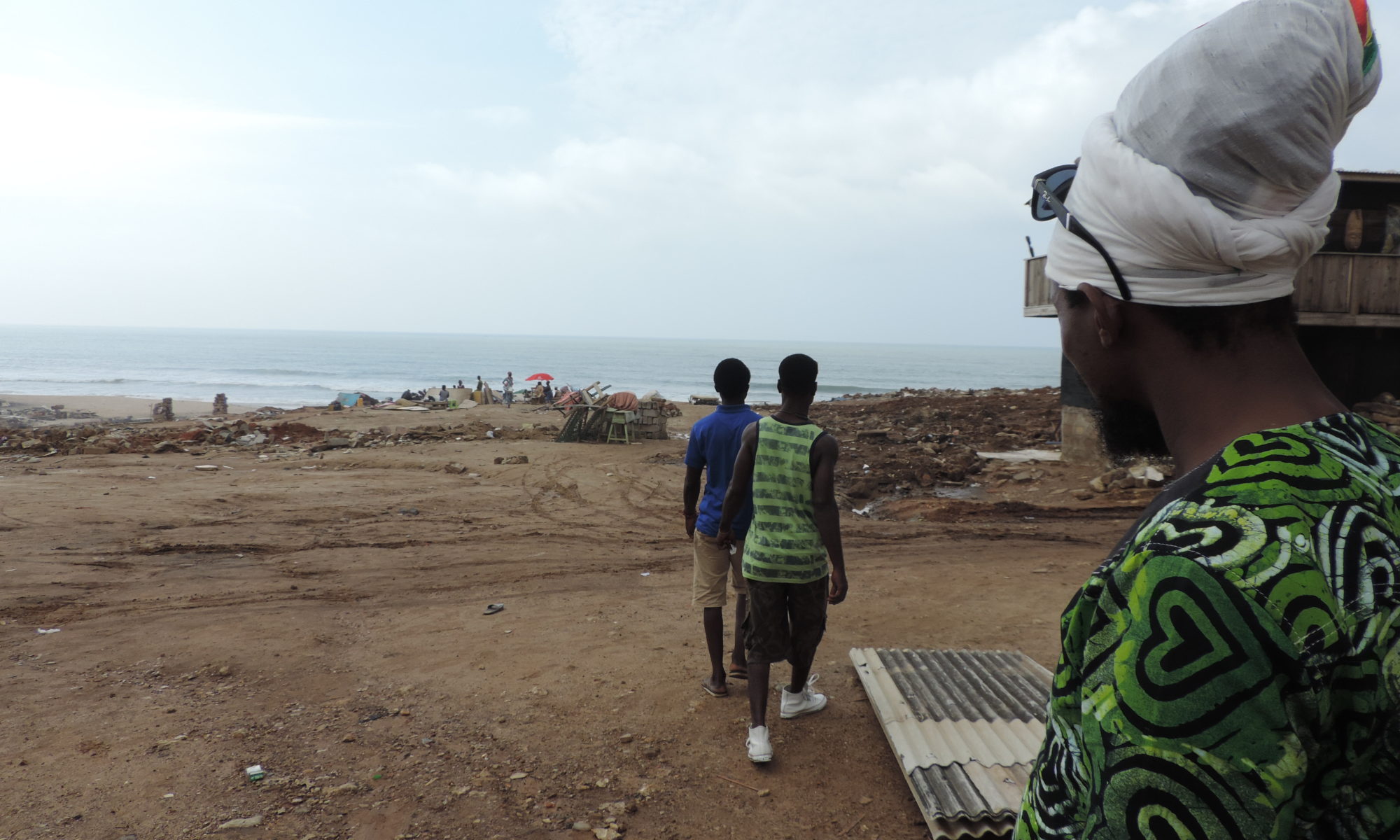 A while ago, I had already posted an article about the Center for National Art and Culture in Accra. Behind this small community is a large area where many artists and craftsmen live, but in the meantime a lot of other people from different regions of Ghana or even other countries have settled here. It is a poor run-down neighborhood that is heavily affected by poverty, has poor sanitary standards, no infrastructure, and is completely ragged from top to bottom – a slum. The non-governmental organization (NGO or NGO) “Solid Rock Association” has settled with one of their shelters in the middle of this slum. The main goal here is to take care of the children of the slum and get them off the streets – if you can even call that streets. The social workers here offer a clean building with a quiet backyard where children can play. They try for the first time through music and dance to build a link to the children, it is taught the playing of instruments, but also a variety of other arts and crafts, such as painting or making clothes. This should help the children to express their own creativity, to strengthen the self-confidence of the children and to open up future perspectives, but above all to show that everyone has the ability to create and produce things. The volunteers are also increasingly teaching other subjects, such as math, English or geography, and the facility also has computers to teach IT skills. All of this should help the children to find a way out of poverty later. 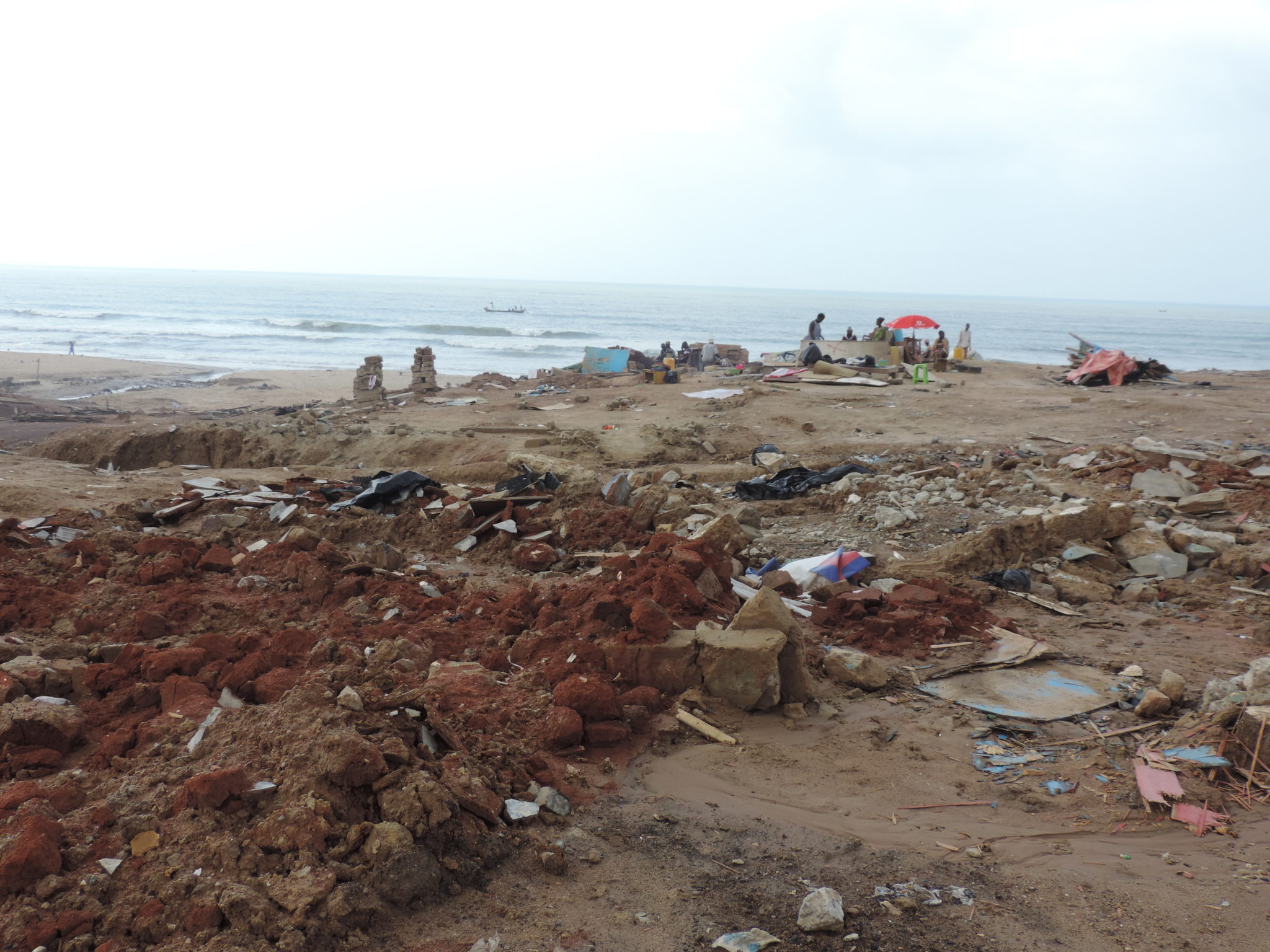 On Sunday, September 14, nearly half of the slum behind the Arts Center was hit flat by big bulldozers. A few days earlier, the mayor of the city came by and ordered the residents to stop working in the art workshops and leave their homes. Of course, the local residents did not know how to react to this and where they should go. The city has meanwhile less and less good building land and this property is to be sold to companies, that means the people have to go there. Where does all the time matter, no one is interested in the arrangement masters. Most of the houses were marked with a red “X” and sprayed with slogans like “Move out” or “Stop working”. Most of the people in the adjoining shacks worked in the art shops, produced parts for sale, or otherwise associated with the arts community, but on the whole, it became a hub for a large number of people from all directions. However, most of them have lived in this slum for over 20 years. 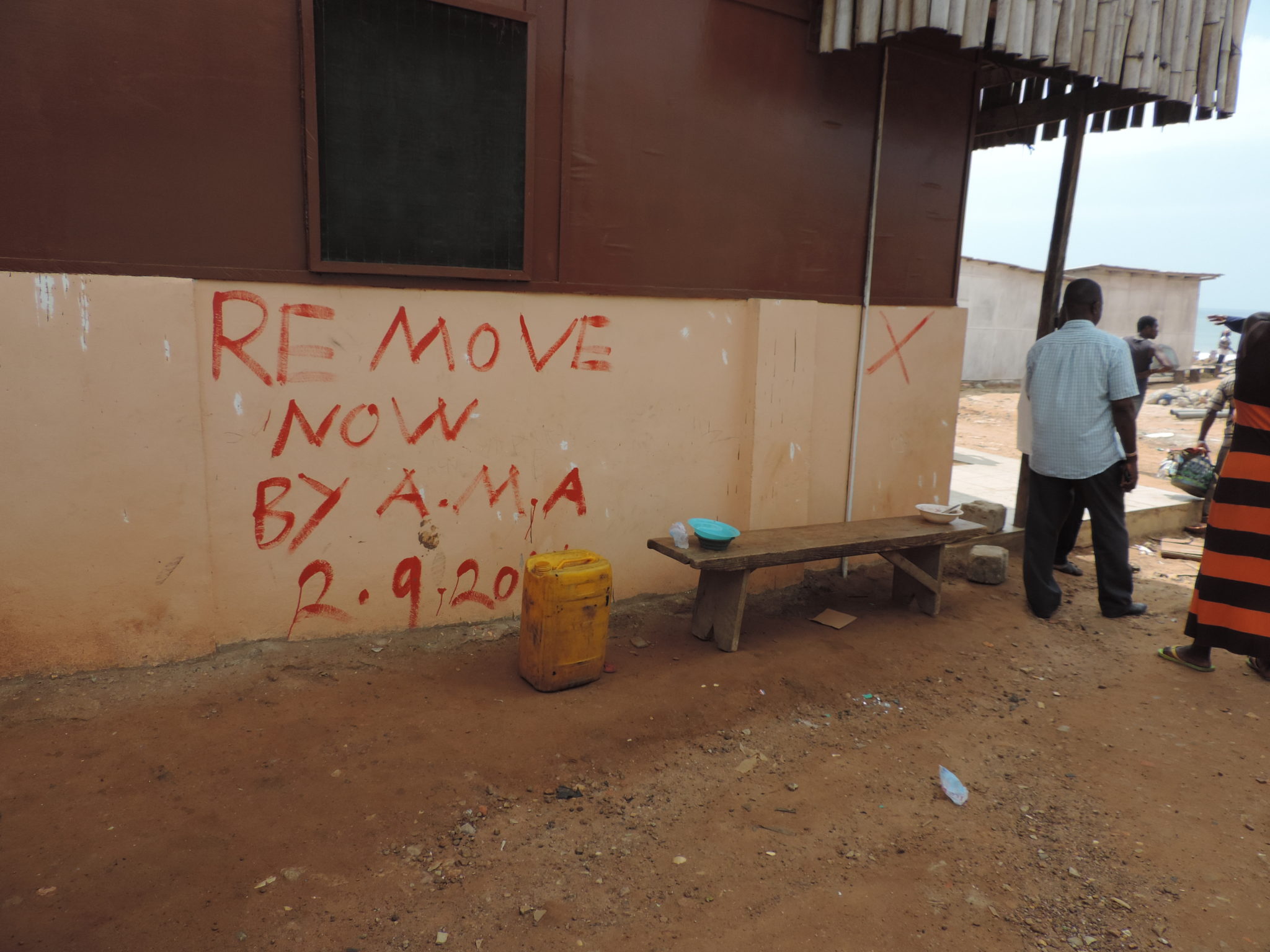 When the bulldozers arrived, they were accompanied by a large police and security service to ensure that the destruction was safely carried out. After all, someone might be dissatisfied that their home together with their belongings will be rolled flat. Photography and filming was not tolerated, I was told that even two reporters were arrested because they wanted to report on the process and were only released a while after the incident. So I had to hide pretty well and was able to collect most of the material only days after, but it shows the result of the action very well. 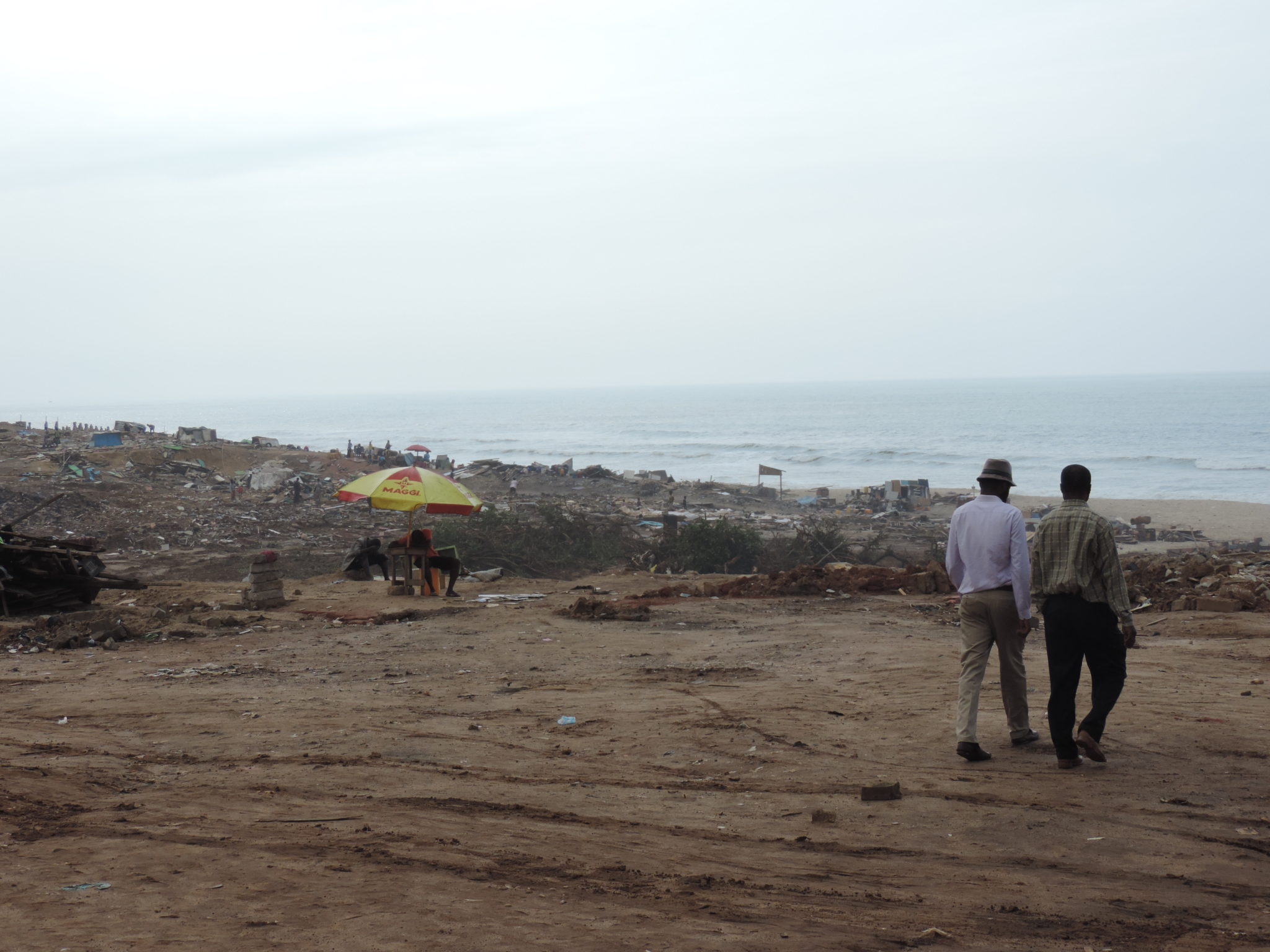 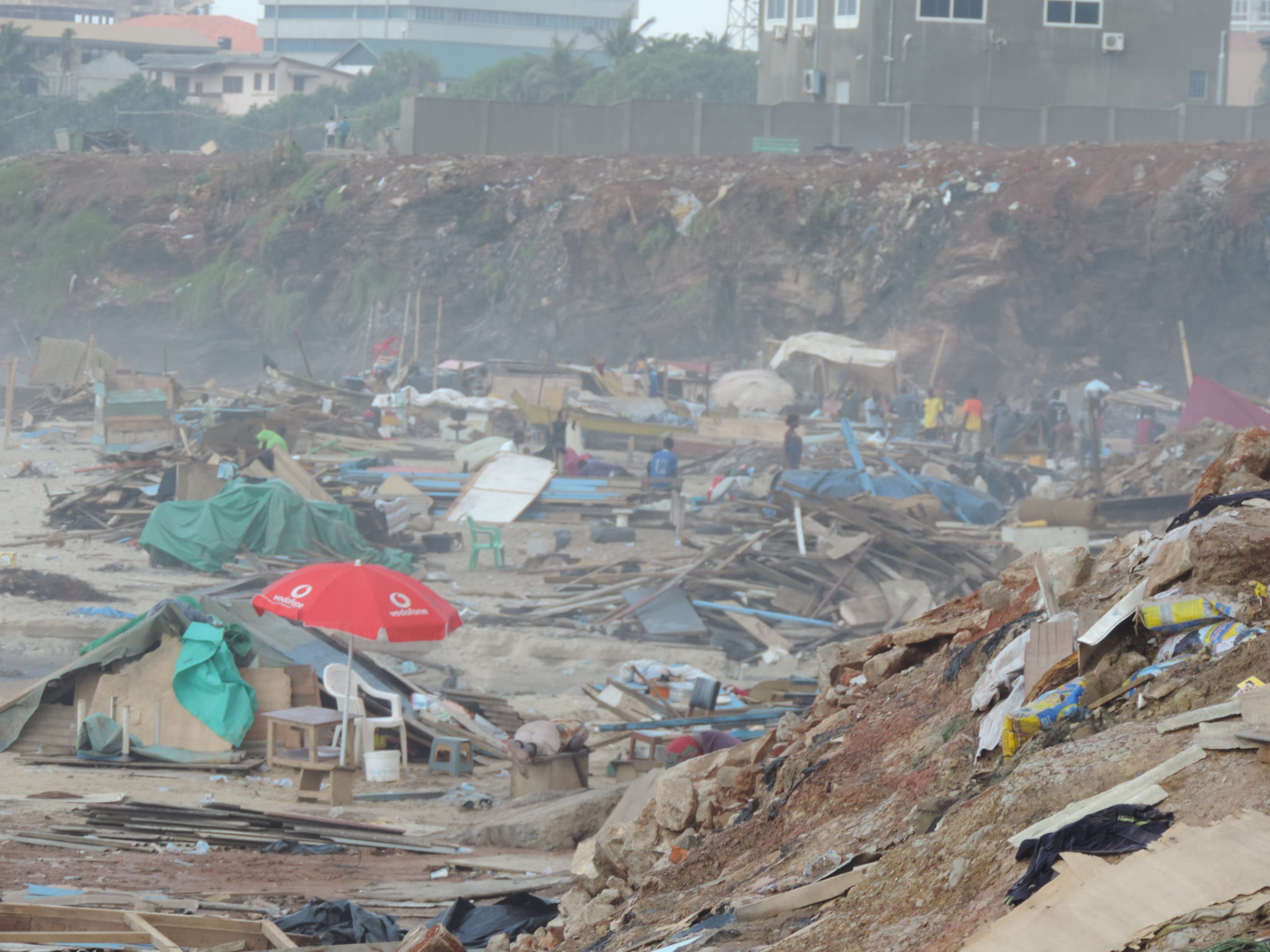 There is still no plan for proper relocation or alternate residence for all these people. Now, around 2,000 people are moving through the area, frustrated, devastated, homeless and without a future perspective. Some are still searching the field for their possessions, others are building makeshift huts on the beach to have a roof over their heads, at least for the first few nights. Many houses are marked with a new red “X” and even the Solid Rock Association is likely to give up. The planning of this urban construction is completely done without a thought for these people, their lives and their future. It is not just about basic rights or respect for human life, it should also be clear that a cholera epidemic is raging in the suburbs of Accra and that the Ebola virus is causing trouble in the countries outside the state’s front door. This way of dealing with the population tremendously increases the infection rates of any disease, which also shows an example of absolute mismanagement in such cases – this is just one of many situations. Adequate treatment and cleansing of the neighborhood would be necessary to provide these people with the possibility of a normal standard of living, but this is beyond question. It does not even offer an alternative living space. Where are these people going to go please? This again shows how the foreign and corporate money governs these countries, how unimportant and worthless most of the population is to the organizers, and how utterly ill-considered and stupid such planning often is. 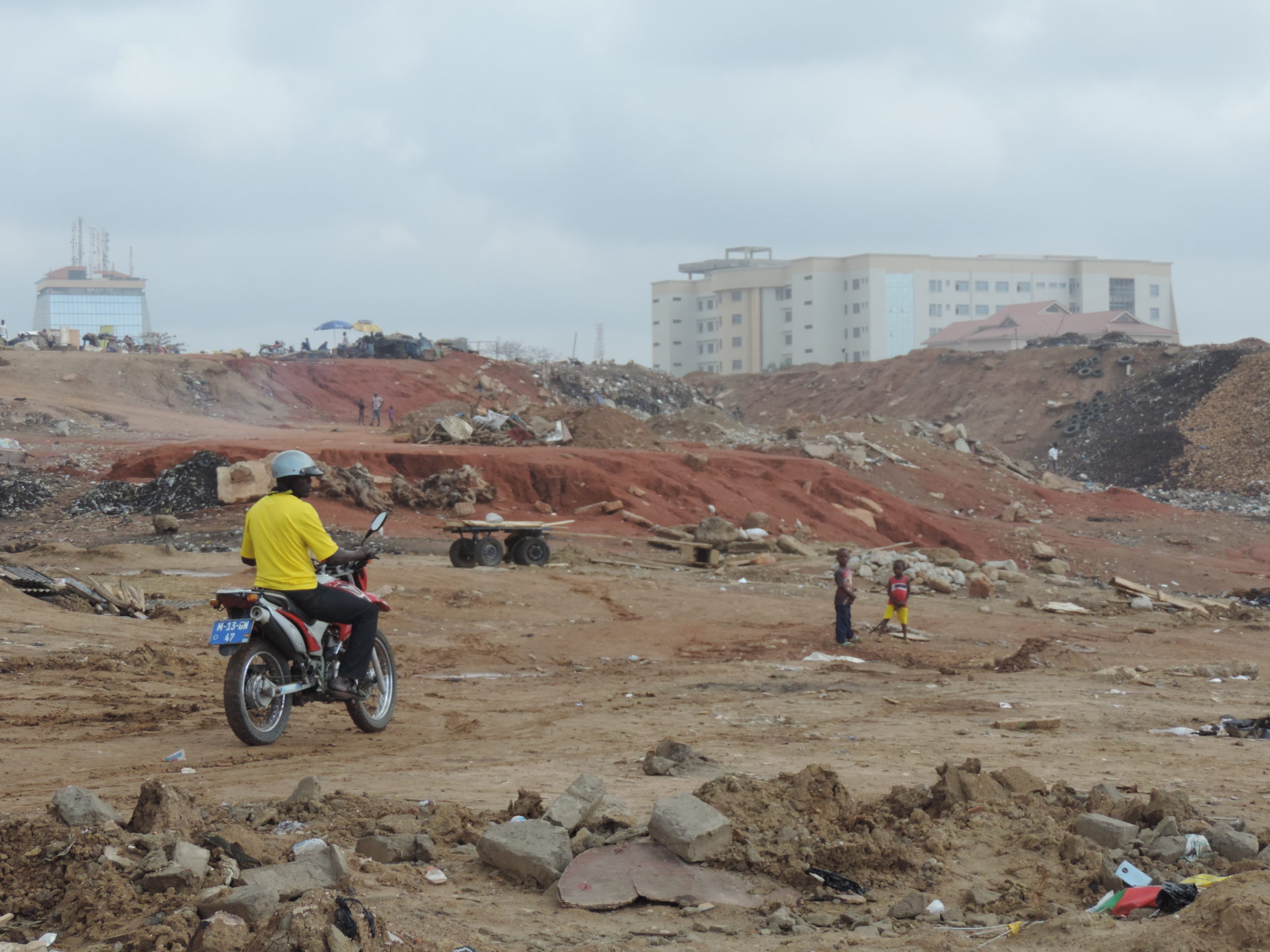 Here you can listen to two interviews that took place two days after the Bulldozer Plattmach action. One is from Arkaah Kobina the president of the Solid Rock Association, the other with the artist Joshua Arthur, who has now lost his home.

Here is a short video of part of the destroyed area: