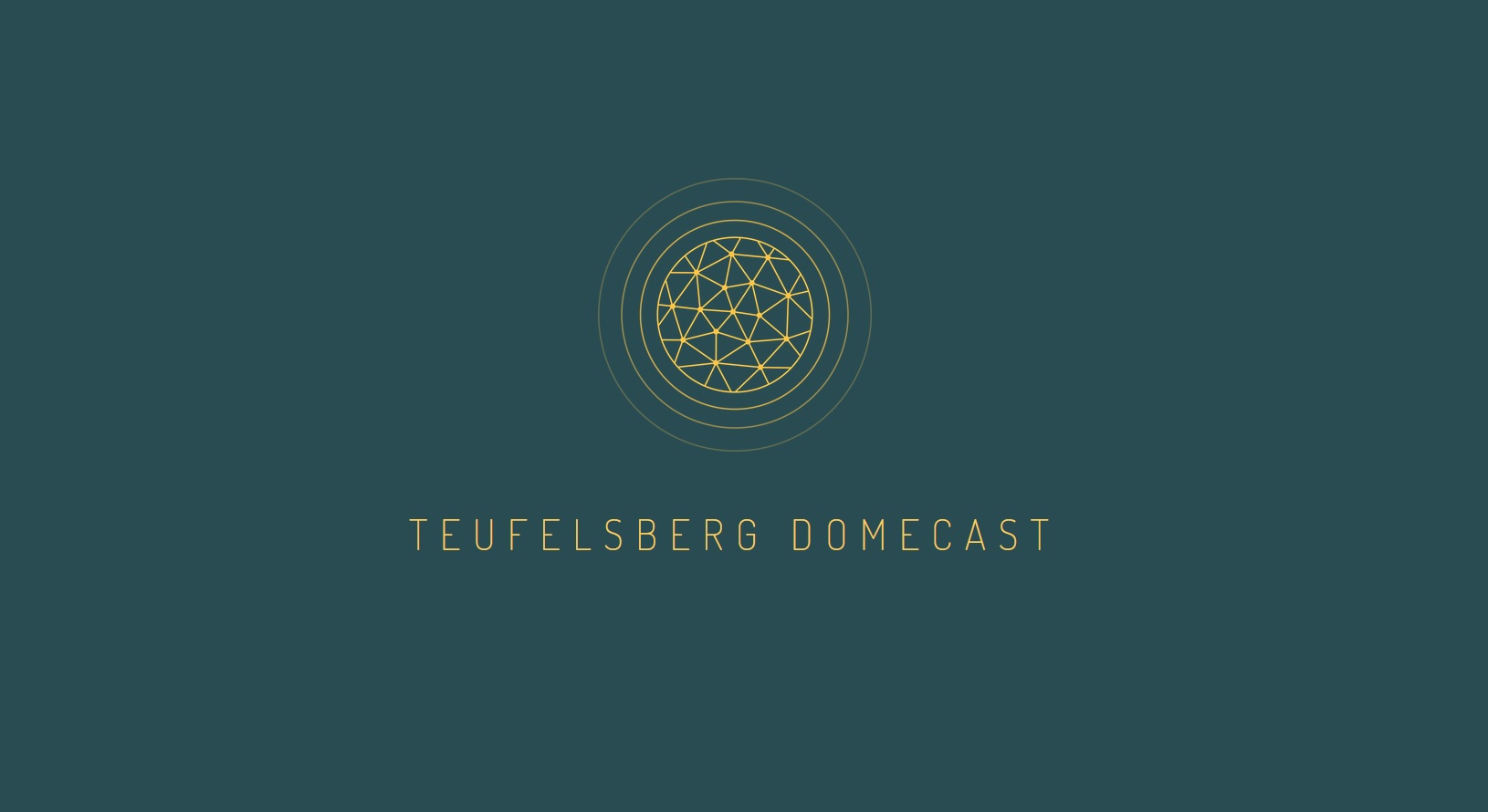 The Teufelsberg Domecast is a podcast series with ambient experimental live performances using the Dome at the top of Teufelsberg in Berlin as a natural parabolic reverb. Their mission is to gather hand picked artists with a deep interest for music experimentation in their distinctive musical background and they look for artists who are dedicated to pushing the boundaries of frequencies and putting the Dome to the test of sound. This article here is about this project which was created in a collaboration between DOTS Gallery & 11001 Records. 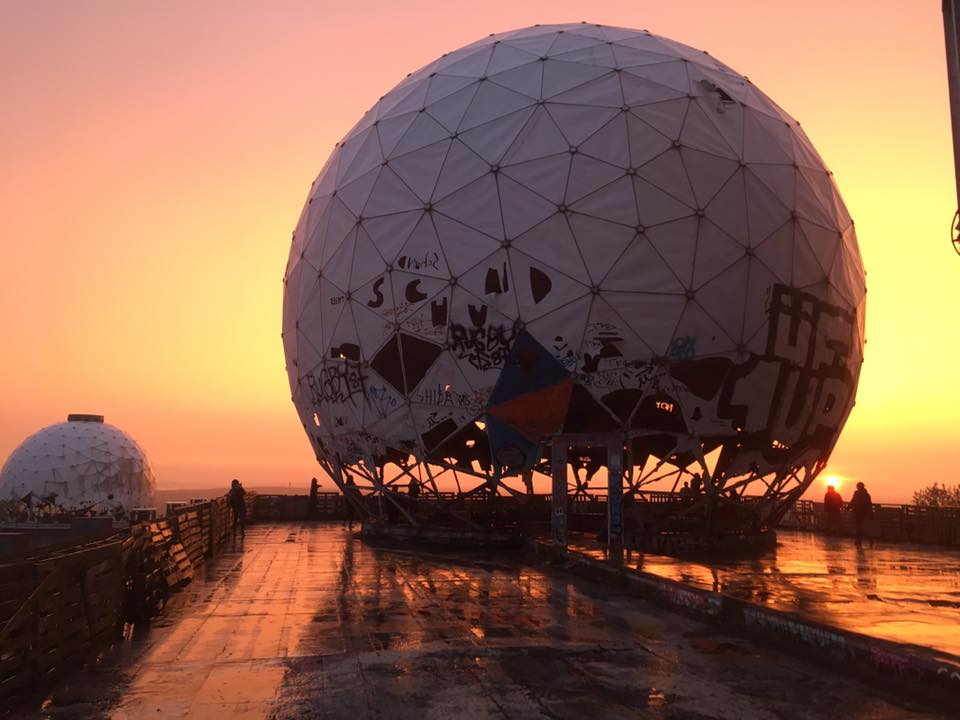 During a stay in the German capital Berlin we came across the awesome off space location on Teufelsberg. On top of the mountain you can find a small adventure land filled with graffiti and amazingly great artworks. After exploring around we found as well a small room with a freaky sound installation, or you could even call it an invention. What you will hear in the background of the podcast interview is not a swarm of insects, but a very interestingly built up construction, where just electric toothbrushes produce these sounds. 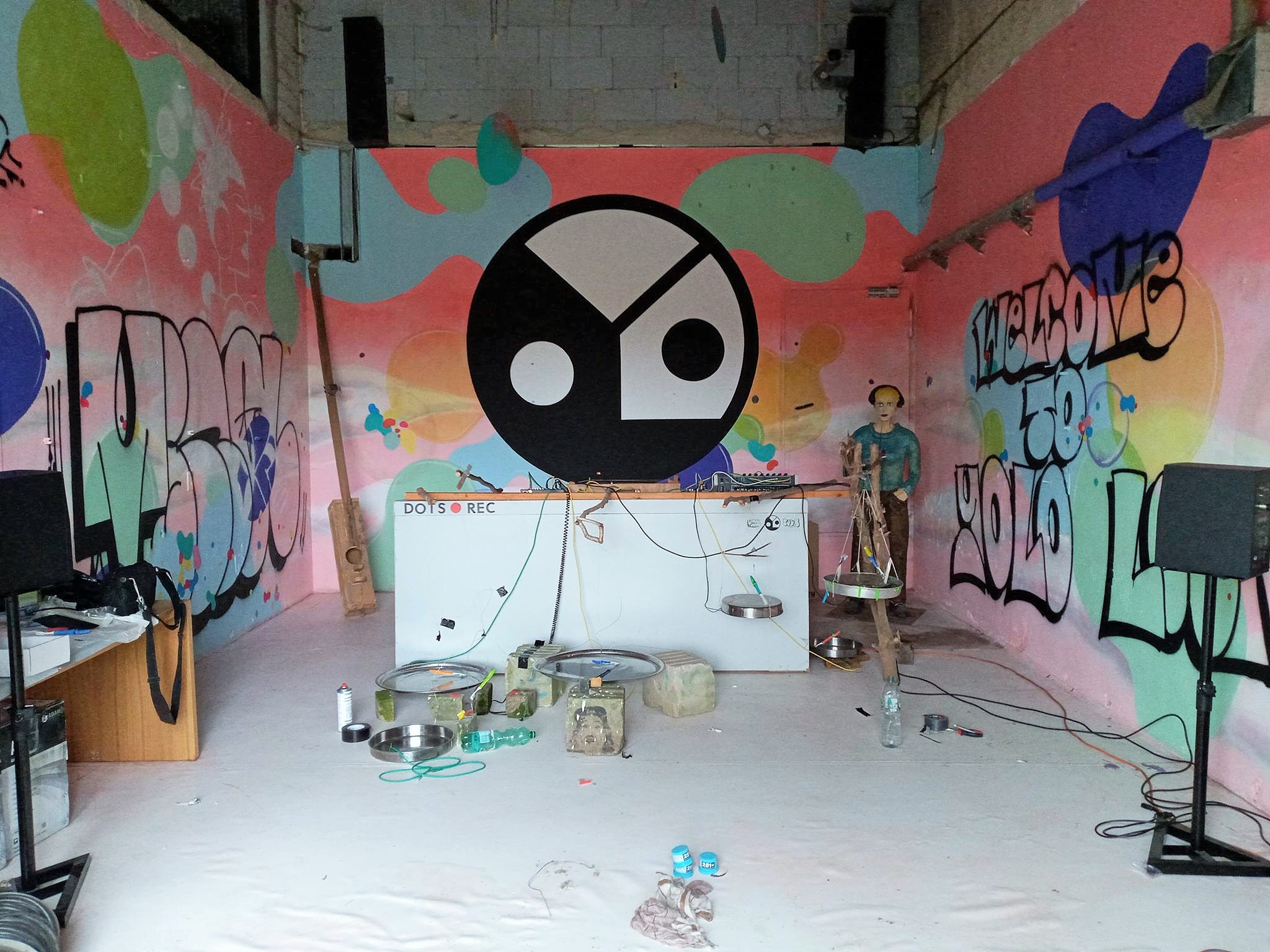 Right next to it, the artist Pit Ruge was handling and adjusting the machinery. Of course we recorded an interview with him in which he told us more about the Domecast project and how it works. The audio is in German, but in the following the written conversation is also translated into English. As well check out the additional article about Pit Ruge and his fantastic sculpture artworks.

So what nice invention do we have here? Just only to look at this construction is already quite interesting.

Here we have a sound installation, which I built a year ago already here at our festival, which we organize. This is called NOISE LAB and is a sound art festival. In principle, the installation is about putting such small cheapest electric toothbrushes on a plate and thus the frequency is transmitted to the metal plate. At some point I noticed this and then I built an installation out of it, where these toothbrushes revolve through the vibration on various large tablets, which are partly also filled with water. That makes an interesting sound. One might think that this results in a one-size-fits-all approach, but this is not the case, because the frequencies are also mutually extinguishing and there are indeed indifferences between the individual sound-producing instruments, for example here six in number. This is what this installation is all about in principle. But to use this correctly for our recording today, we had to add some elements, because we want to play these sounds of the toothbrushes here in a huge dome on top of the tower at Teufelsberg, which was built by the NSA to spy on at that time. These instruments are now equipped with piezo pickups and then we can mix it out cleanly. This is now basically this structure, which we have just installed here today.

Does the water have to be on the plates? Would it not work that way or would it sound different?

It changes the frequencies a bit. I tested something around there and then I came to believe that it’s all right with water. It is also an interesting effect if you illuminate all of this. Then you can also visualize these frequencies. I’m not going to do that today, but if you put headlights on it and then let it reflect on a wall, then you can really see the vibrations in the water. This is also an exciting component again, because the frequencies, which you usually only hear, also become visible that way. 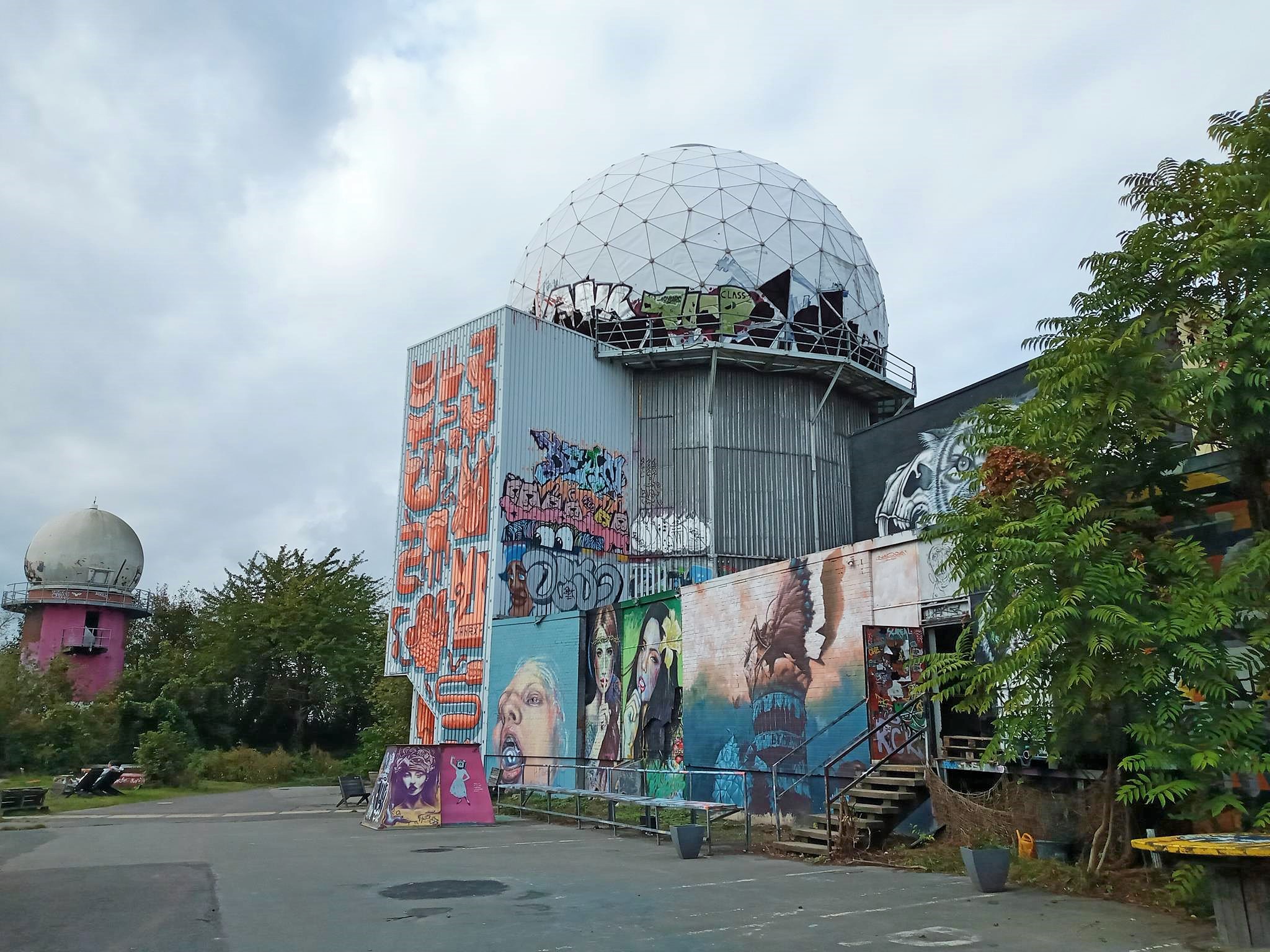 When I looked in here, at first I had the name Gyro Gearloose in my head. On the one hand, there are the mixing consoles, which everyone knows. But all the rest, it’s a whole new invention. And it also fits to experimental music. So you like to experiment around with sounds and that’s also the concept of the podcast?

Yeah, that’s right. So what we’re doing here with the podcast which we are starting right now is actually that we’re giving different artists the opportunity to play purely acoustically into this dome. So the dome is no longer accessible. But it has such a nice sound, just because it is a circular room, which by itself has somehow an echo of 15 to 20 seconds. That is already really extreme. And we can still give people the opportunity to try it out and interact with it. We built this installation here and this was our first project that we started as DOTS Gallery. We have meanwhile refined that and have now a really nice solution, so we have built a plug & play system for the project. Before, we always had to carry everything up the hill, but now we have it firmly installed and are really happy that we are ready and in principle only have to start the generator on the mountain. The Teufelsberg is actually off grid. 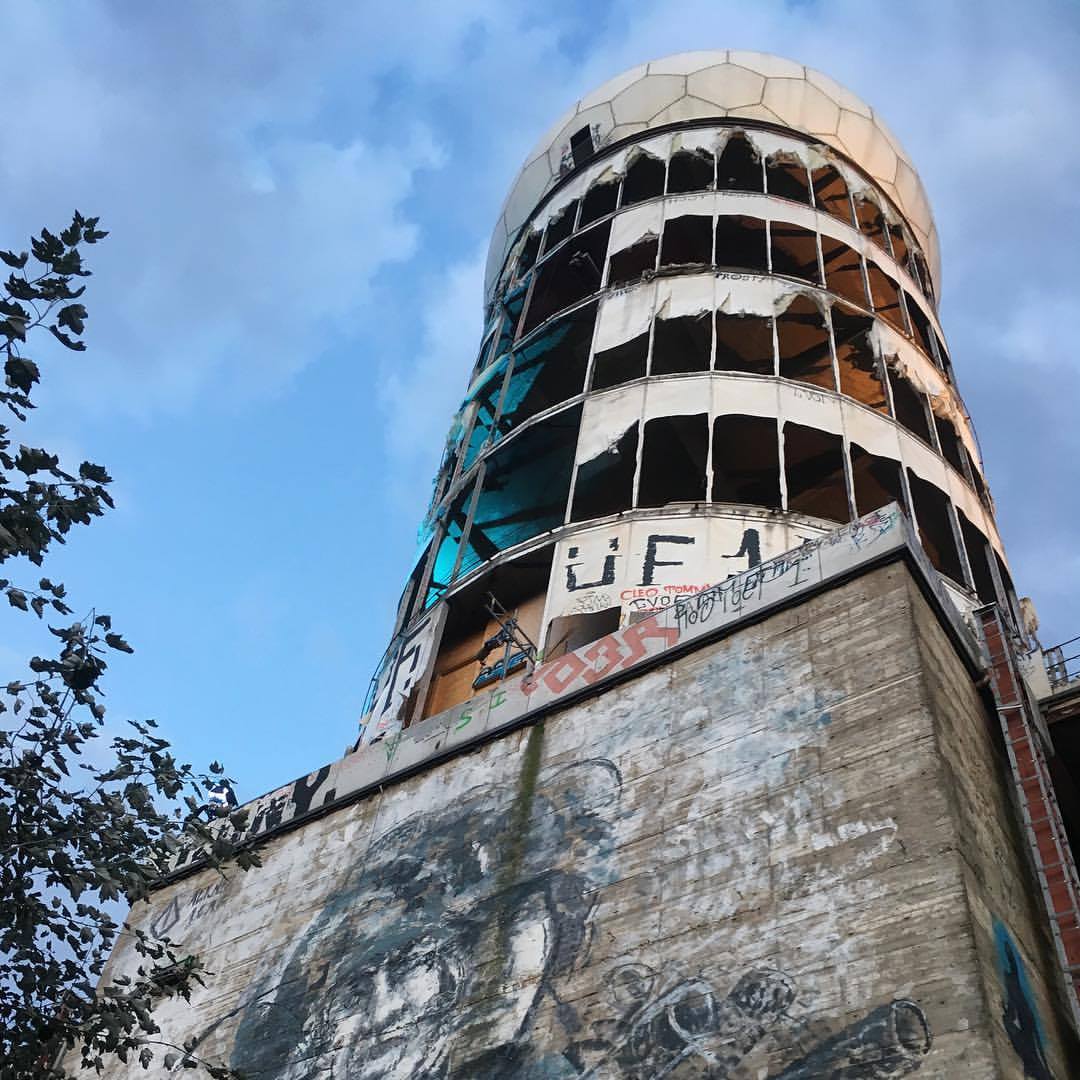 So this here is actually your studio? Then how can I imagine it? You invite artists, do an interview with them and then they play their music?

This is our studio, exactly. It is actually the case that we also make video recordings. So these are always video podcasts, which we will publish later also on Youtube. There’s nothing online yet, it’s all fresh. But we have already recorded the first seven artists. And yes, so we’re just about to make our workflow a little better, but we’re on the right track. 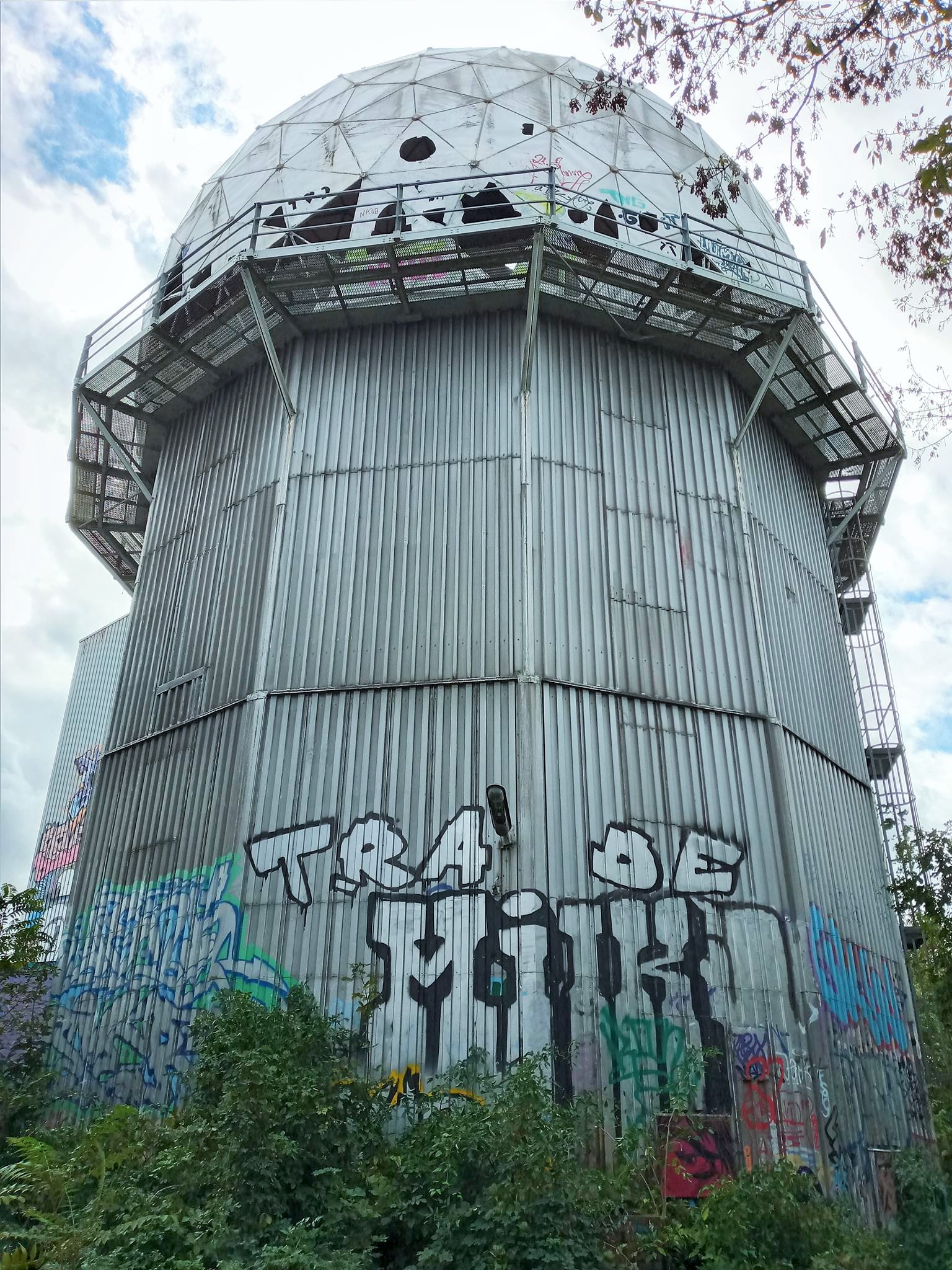 Where can I find the podcast?

The landing page is definitely www.domecast.de and over there you get all the links. We will of course serve everything, but above all Youtube with the videos. But otherwise, we will also promote this throughout the entire spectrum.

You yourself are a musician or a DJ? Or an inventor?

I am a freelance artist and I am simply interested in different things and areas. I actually come from photography, earn my money with sculptures and then in between I have no fear of contact with other subjects. I myself have been a big fan of music and a friend of experimental sounds for a long time. Yeah, and what we’re doing here is really the consequence of the place. We just said, that this unique acoustic space, this special dome, that’s kind of awesome, and if we act here as a gallery, then it’s really a topic that’s very important in our concept.

I think, the whole place is something special and I got goose bumps while wanderin around here as well. There is something magical about this lost place scenario and the fabulous artworks. It has something really unique.

Yeah, it’s probably even more. This Teufelsberg is an artificial mountain, which was built from the ruins of the Second World War. Below it is an officer’s university that Adolf Hitler had built and which was buried under these stones. Up here the building was then from the NSA, that was for espionage. And the original place was also formerly a Celtic square. The name Teufelsberg also comes from the Devil’s Lake and there was a moor. So there’s basically a lot in one place and some say it’s an energetic place anyway. It is just charged by these aspects, that is, by the war with Hitler and the Cold War. It is also a nice consequence that this is also used culturally and that a lot of streetart and graffiti takes place here. This is what happens here above all and what we do is a really big contrast program. While we also have points of convergence, because our room inside has also been designed by graffiti artists. That is also very interesting, because this is actually a business card for a project, which is called JOLO LAND and also for a Youtube project about Corona. That’s why it also suited that my two friends PUSCHI and MINA from the projects painted the interior of the space. It also always has a visual meaning when you enter a room. 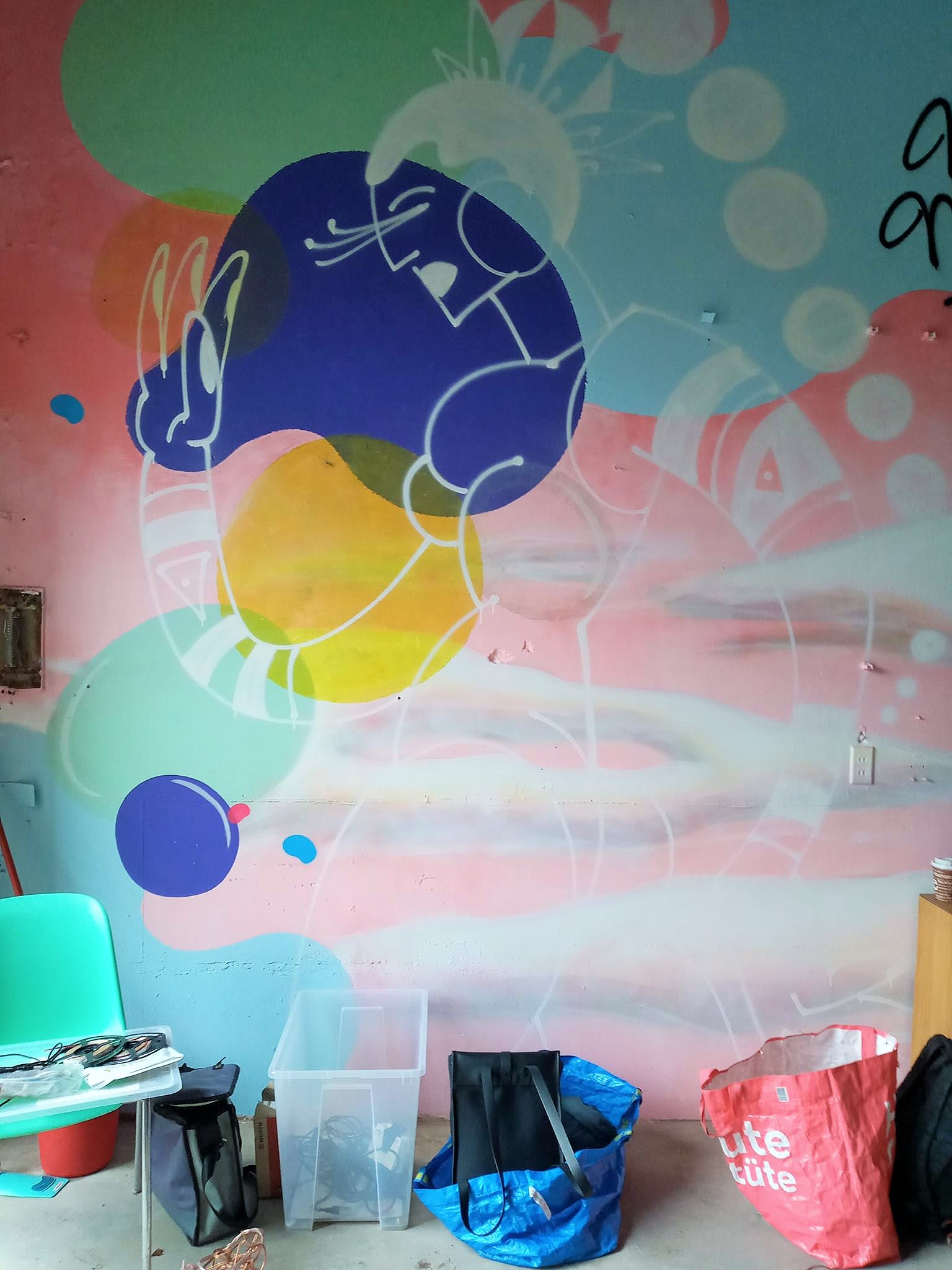 What you just said about what is under the mountain and the different usages over time, I think it is even more important now to refill it culturally in a new way and to give it a new meaning with positive elements, with creativity and with color.

Absolutely. I also find it very free to work here in this place and then to participate, to bring this here a little bit forward. 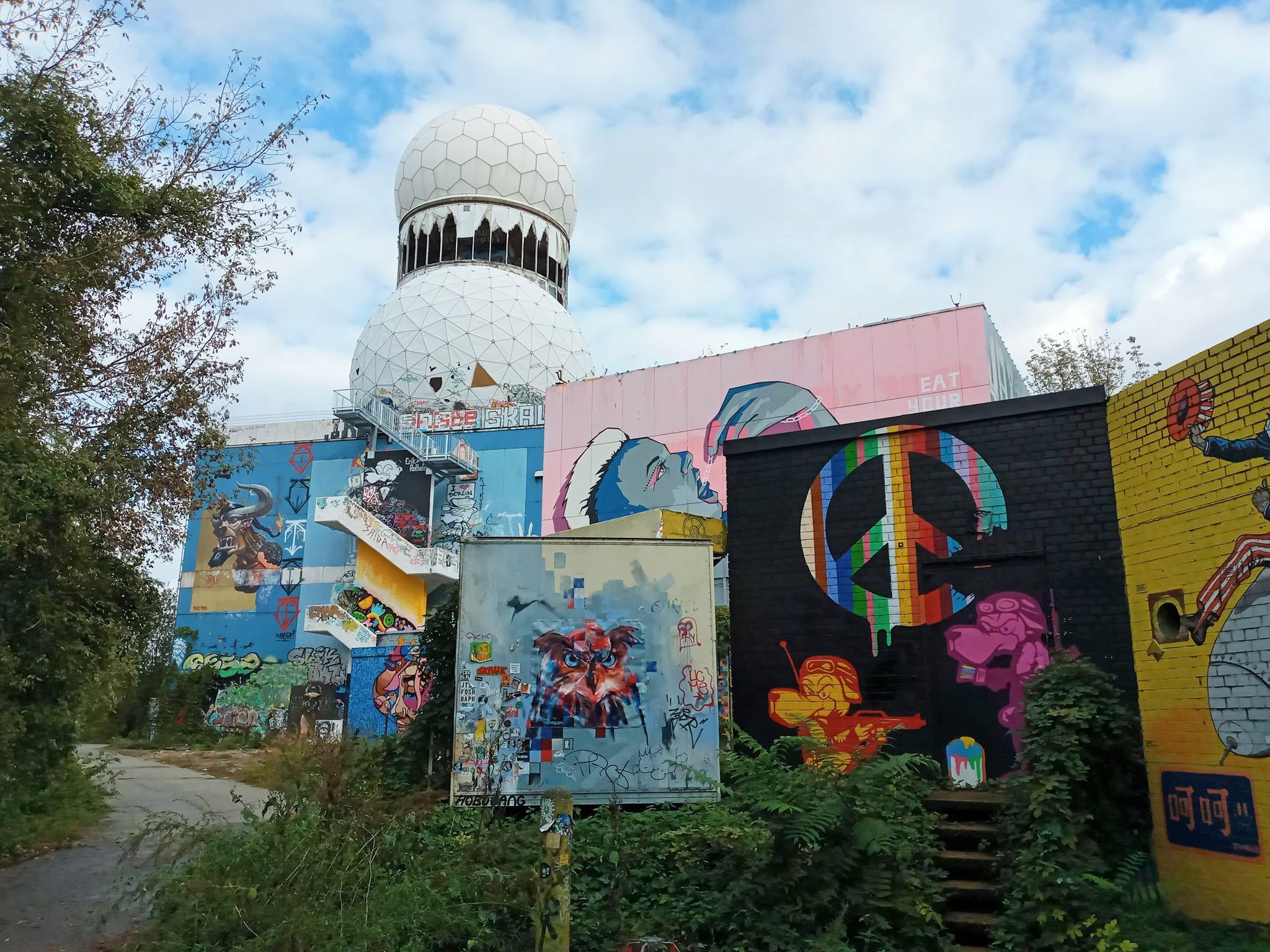 You said earlier that you also make sculptures and actually come from photography. Do you have a gallery in Berlin or a studio?

Let’s just say we have another gallery up here in the building. There we have a room again, which is complete for us, but the building is locked and you can’t use it right now. But what else I do, so I build wooden sculptures for pumpkin exhibitions. They are now quite common, so well, what means common, but there are seven pumpkin exhibitions in Germany meanwhile and there I always create wood sculptures on a particular subject and theme. This year I built an underwater world. There was, for example, a mermaid or a fish that is five meters tall and was subsequently hung up with pumpkins. I build the figures with steel and wood components and this is basically my project called “Waldwerft”. What we have just rebuilt here is a permanent installation, in which every visitor who comes to the Teufelsberg can go in here with us, can talk in with the microphone and thus also try out this dome sound. The whole thing is a system that also works moderately off grid. So with a solar panel and battery and an amplifier. Every time you go in there, the system is switched on via a motion detector and so everyone can now test it for themselves. So in mono just once to test it. What we do with our recordings is of course stereo and in better quality. Thus, every visitor can send via the dome. 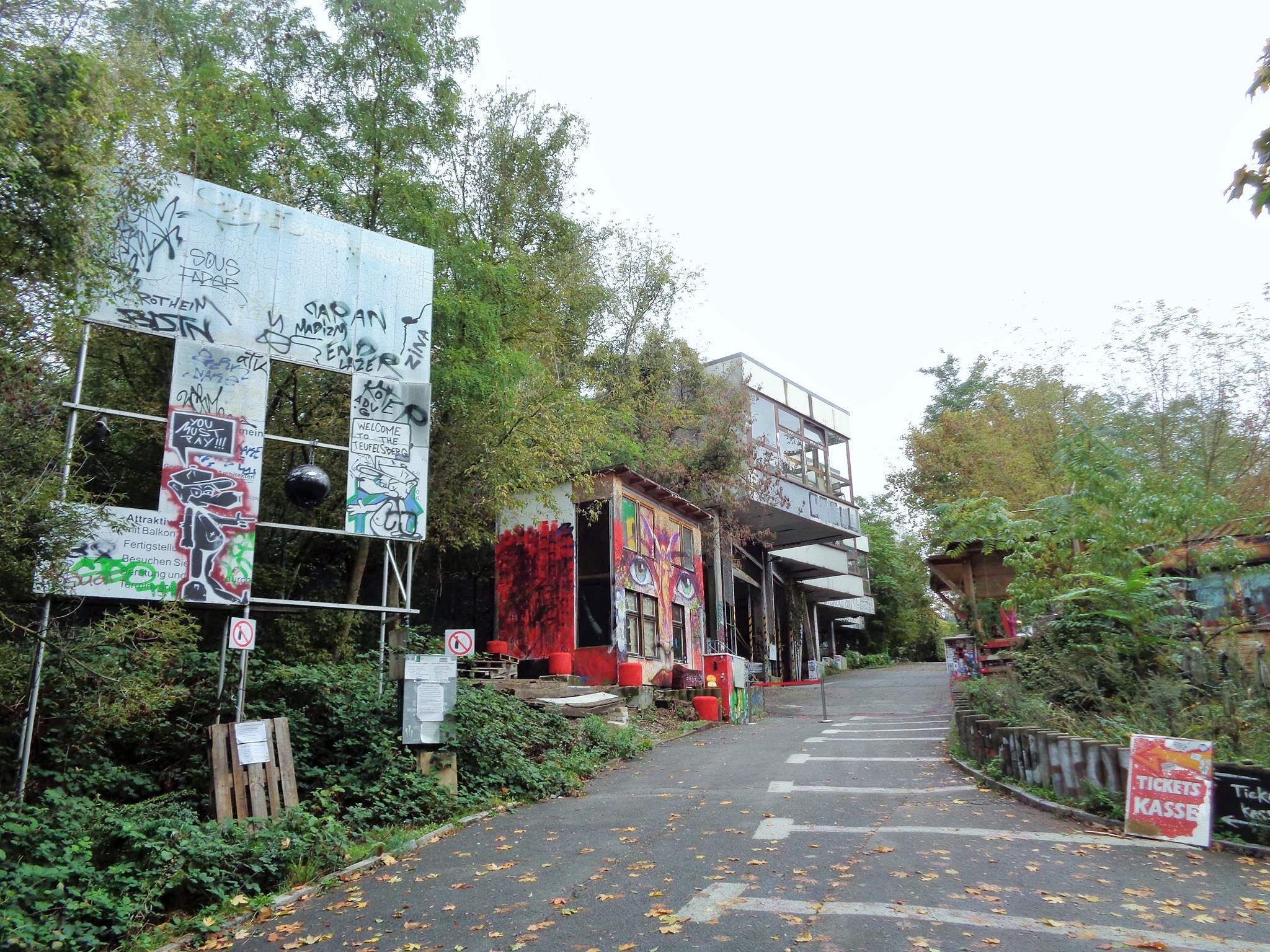 In the end there could be even small concerts on the microphone and via the dome.

Yes, it’s just the beginning. We will see what will happen and how it will develope. Who knows, maybe there’ll even be some flash mobs here sometime. So the way: “Let’s meet at the microphone”. 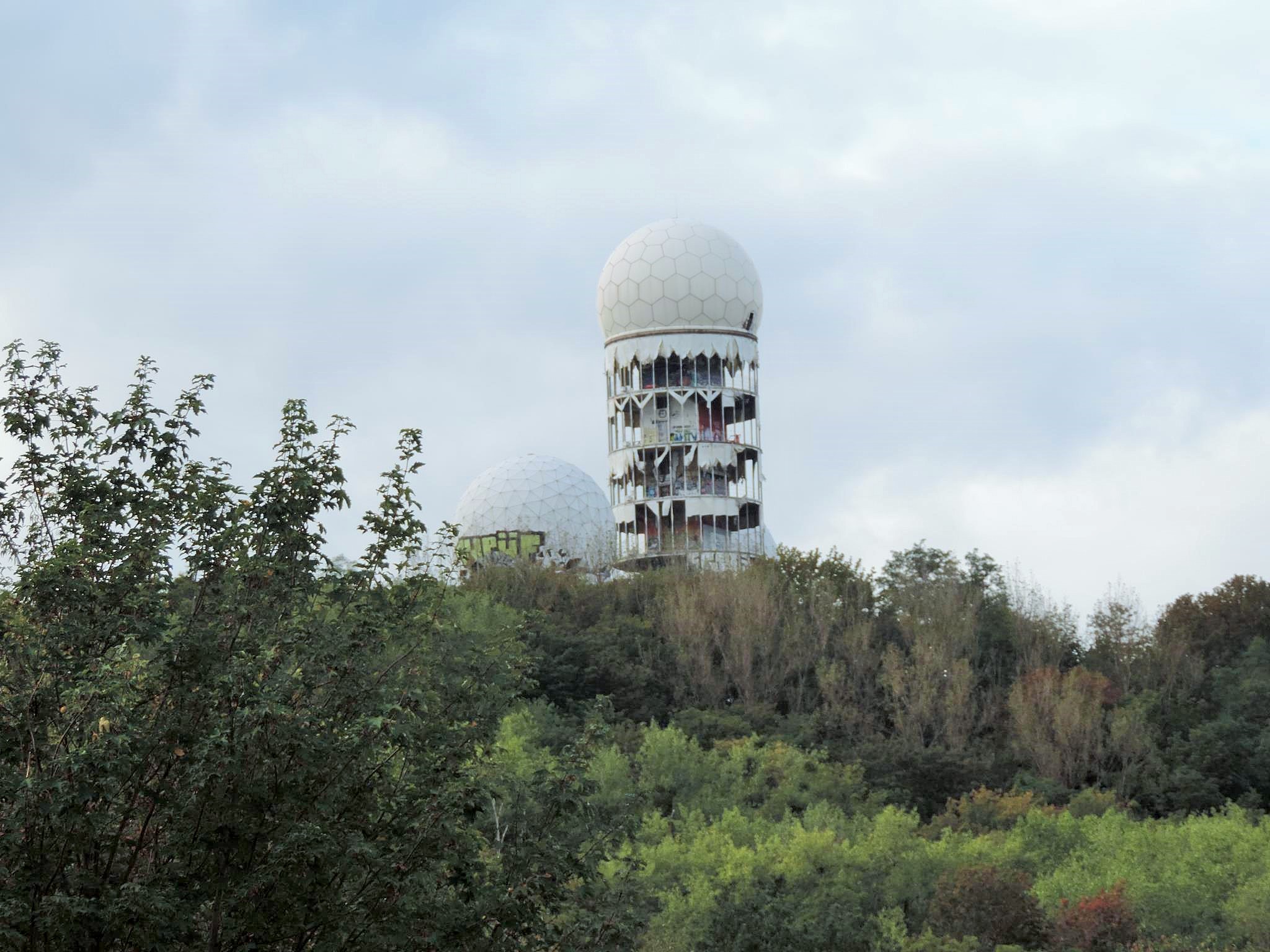 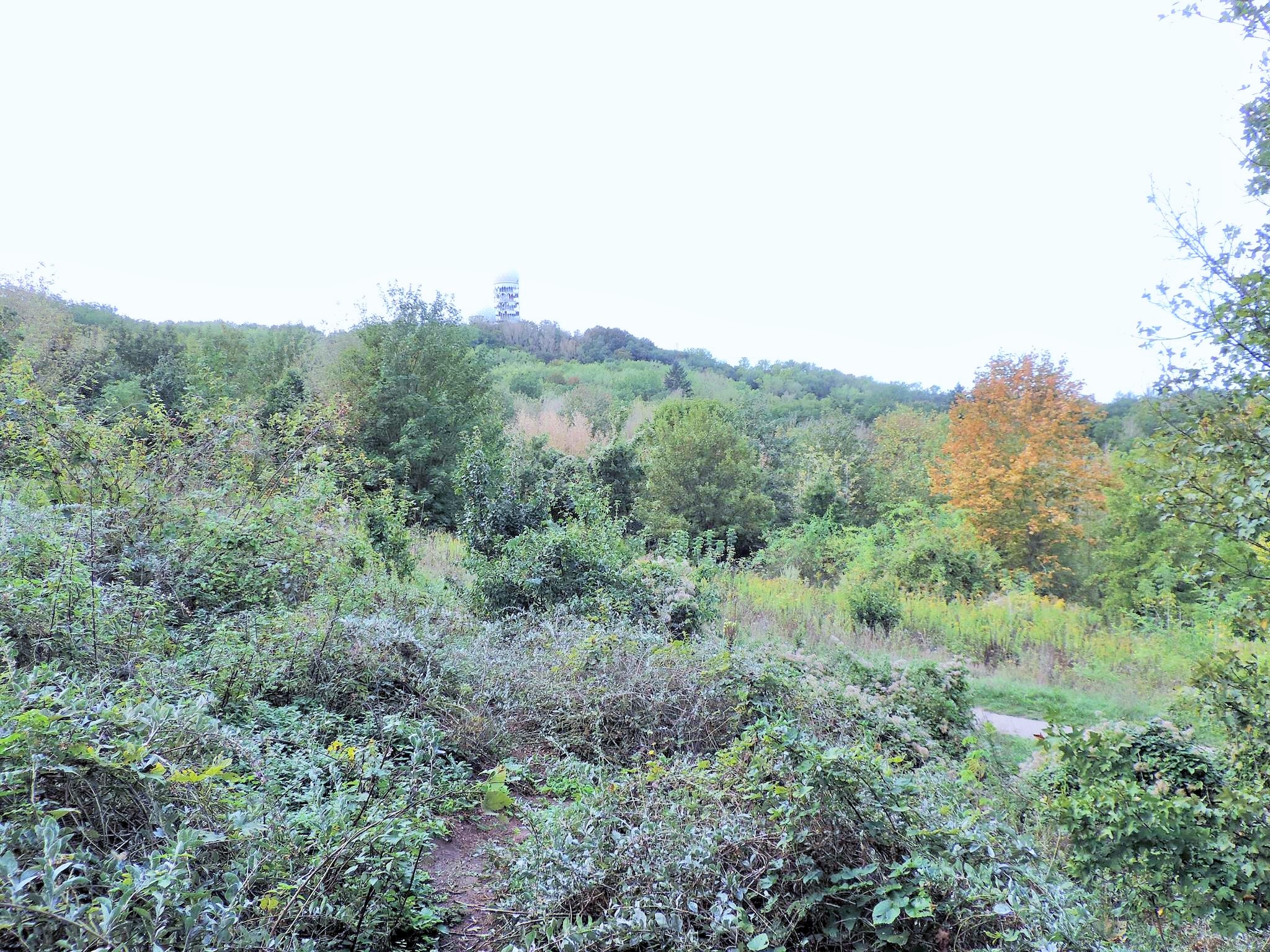