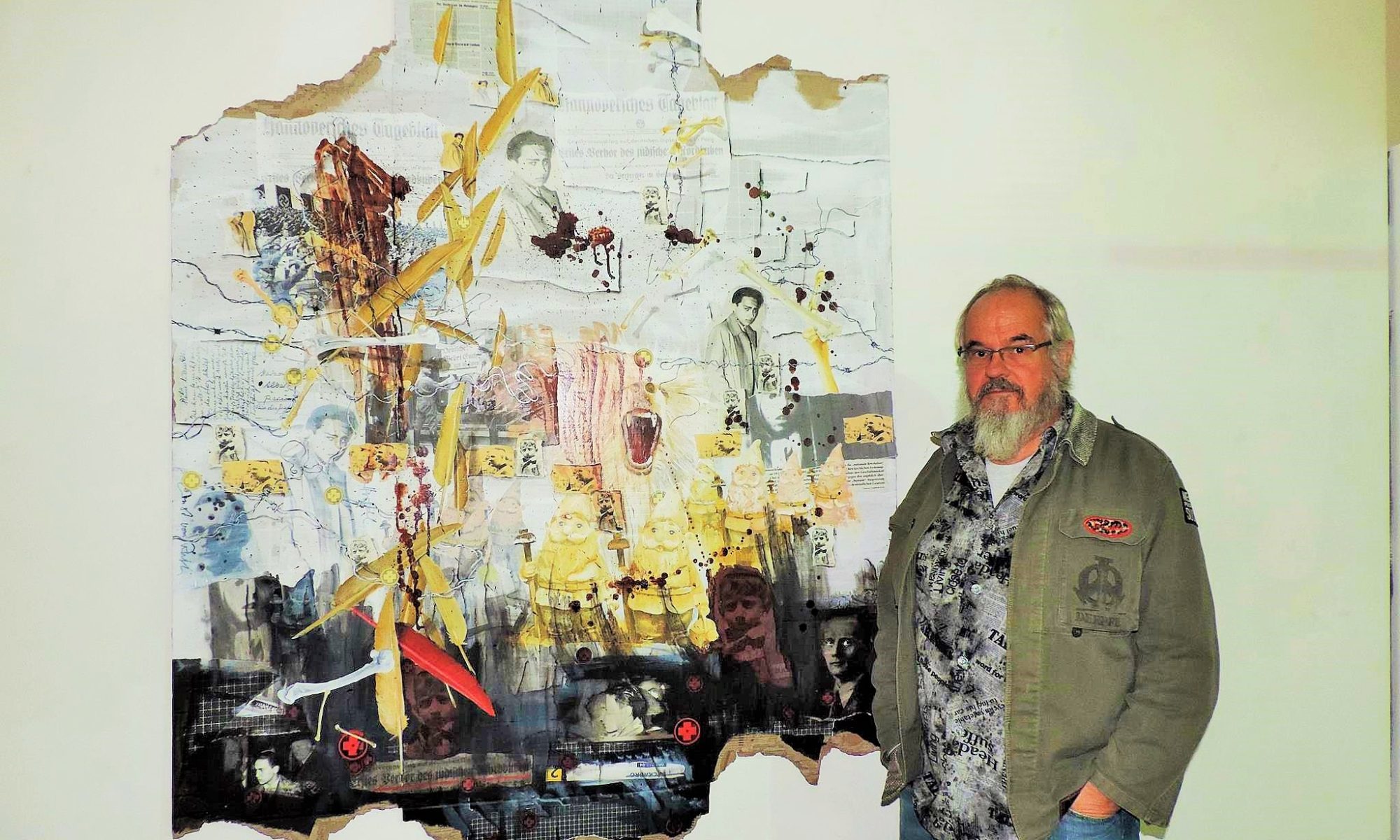 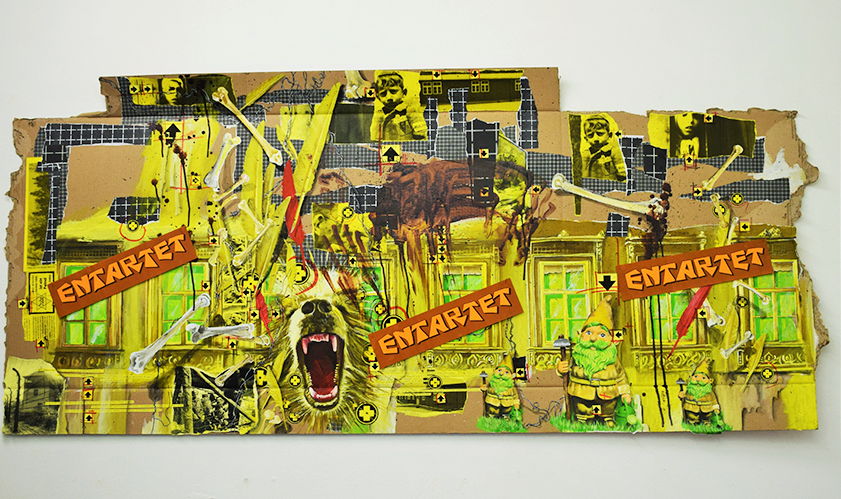 In an interview DeePee told us more about his artwork and the messages behind. The podcast is in German but in the following you can read the written down conversation translated into English.

We’re looking at a collage right now, down there are the garden gnomes and it’s a lot of color. But if you take a closer look at the picture, more in detail, then it comes out a lot of social criticism. You are dealing with the Holocaust in your own artistic way.

Yes, the subject of the Holocaust, which I have been working on for over a year. That means master race. So in that sense, the holocaust is the biggest part that is there. I came to it, so from my generation, I am someone who was born shortly after the war in 1954. And in my youth all fascism was still a topic, not like today, where that is still far away. They were also the teachers, so most of the teachers we had, in principle, were party members at best. At best. If not more. But that has taken a back seat with time. Then came other stories, what do I know, relationship and profession. And then it was pretty far away. And now, a few years ago, I was in Osthofen at the memorial, and suddenly everything came back to me with one blow. And since then I work with the topic. 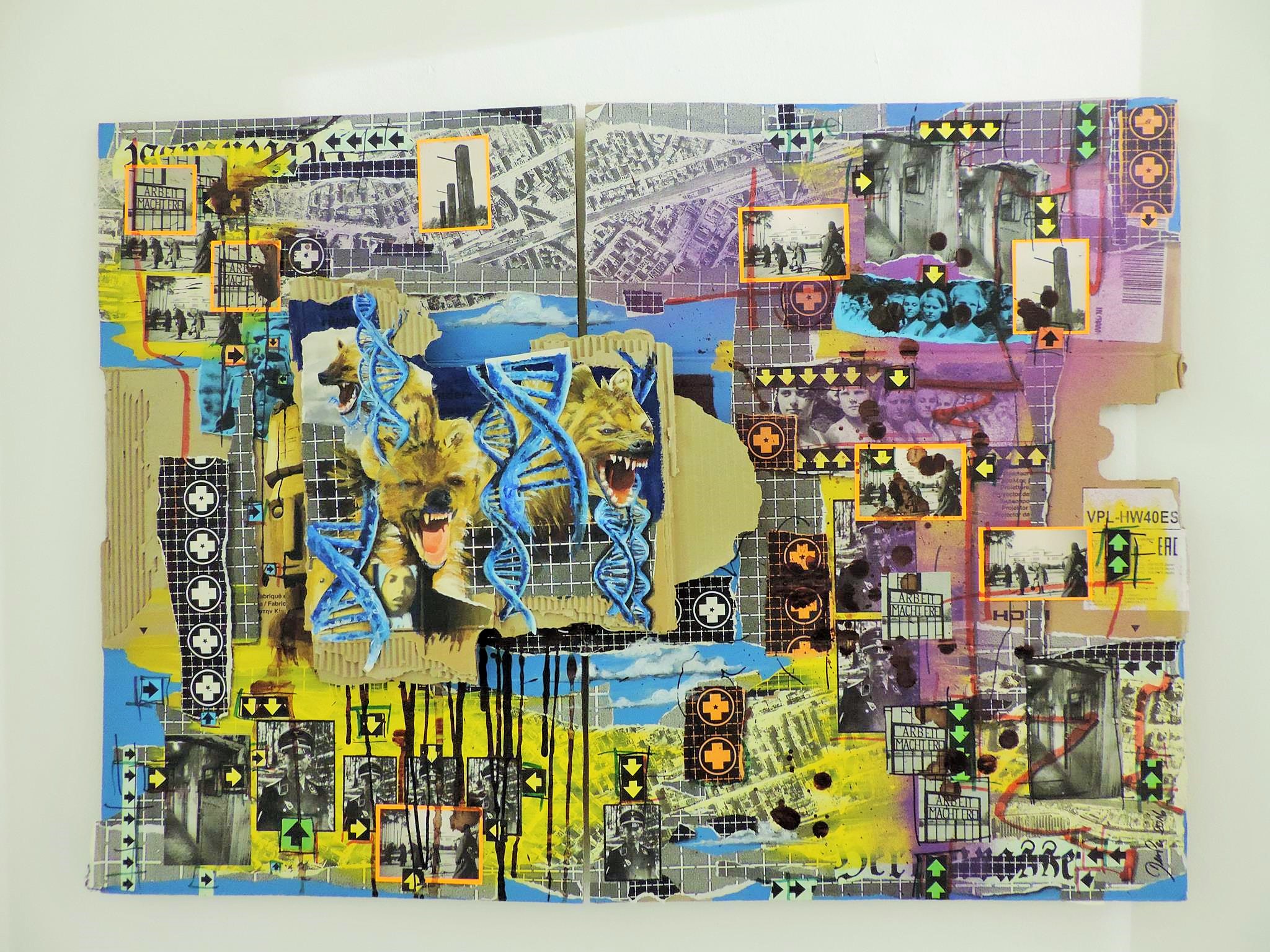 Art is always a reflection of one’s own style and history and past. Can you with you, so what I see here, at first glance it is very colorful. What I like, that’s the garden gnome. Is that also something from your past, so it was painted colorful, they tried to do something new after the reconstruction, but actually there was still a lot of pain and destruction behind it. What shines through here then in the pictures.

Great interpretation. Well, I would not have seen it that way, but I always say anyway, so what the viewer sees in the picture is also in the picture. That’s why I usually do not explain individual elements, I mean for what a garden gnome is, is actually pretty clear. But that should actually speak to everyone directly. For talks and vernissages. Well then, that means for me the spit-bourgeoisie or whatever. But that can mean something quite different for someone else.

What I noticed, so you work with the two contrasts. So colorful, direct, piercing and the intense colors. And then in between these black and white surfaces. The color between is more fun and chaotic. Also with the other pictures. Maybe something screaming, and the black is a bit overwhelming.

This is a mixed technique now. That means from printing, that is to say with computer-printings of pictures, then here from the deportation a young girl. Since I just have the feeling, if I go there with paint over it, so I can not, that would not be ok. That speaks for itself the strongest. Even if we see some Faschos elsewhere, or look at the picture of Herschel Grynszpan. If I over-paint that changes the statement too much. The other, the garden gnomes, including collages, but I’m overpainting them without them changing. That’s why collages. This is very important, they have to look the same again and again, they always have to have identities in them. This is very important in my pictures. 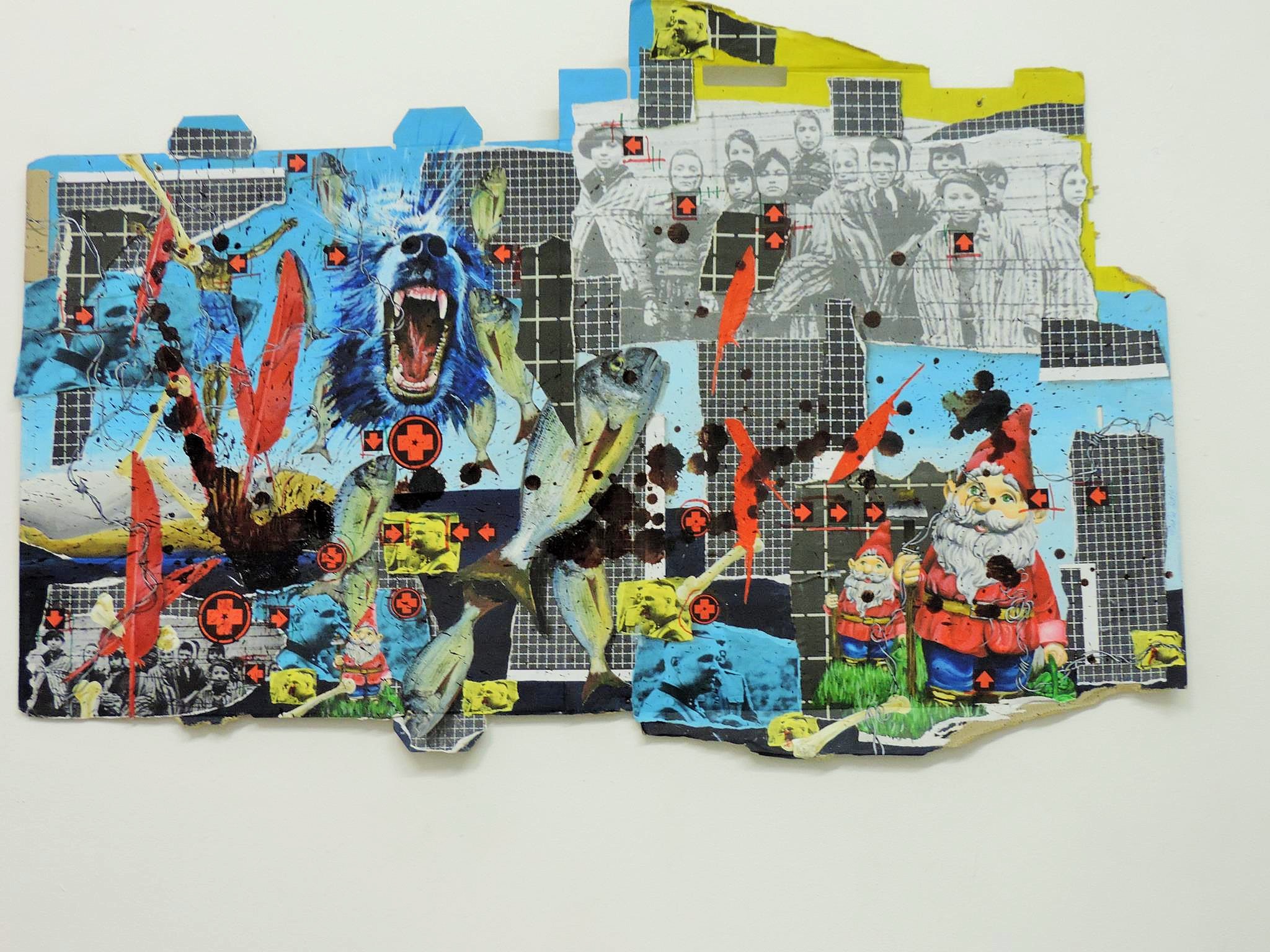 There are also two different statements. The garden dwarf symbolizes something else and expresses something else, like a deported person. The garden gnome is the illusion behind which bad things happen, and the gray is then the reality as it really is. Although it should be the other way around.

But we are still working on that.

Here we still have the screaming bear. What’s it all about?

Oh, you recognize the bear. Many say that’s a wolf or a dog. But that’s a bear. This is somehow an identification figure for me. But this is not an attacking bear now, but a defending bear. He says stop, stop, here and no further. So I see myself in there. That’s why it happens so often in the pictures. Of course I also see myself in the Garden Gnome, that is my past. I come from the petty bourgeoisie. My parents, that was all pretty tight. 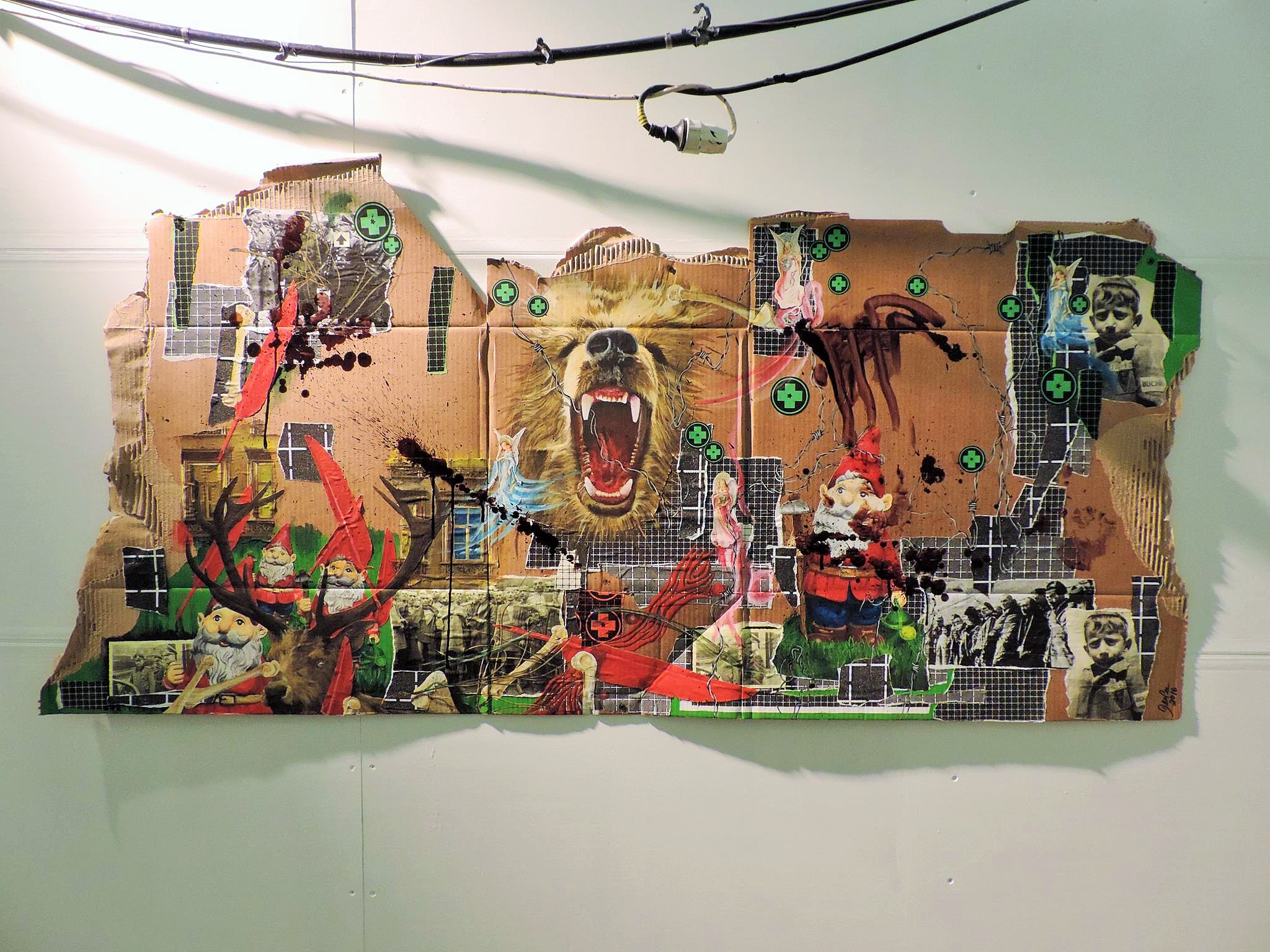 Are you a comic fan? Because that could be synonymous with the pictures accept.

So I became. Through my friends in France. I have my main scene, so most of the people I work with live in Paris. I happened to meet them once. And the French are blatantly comic-affine. And I bring out this infrared too, that’s a graphzine. That’s what happened in France. And there are also many of my French friends in it. And their style is far more comic than mine. But that may be that there is something in it. Surprised me now, I would not have seen it that way. I always thought, man, you should do something more with comics. But I thought, no, that’s not my thing. But if you see that, it’s in there, that’s nice.

There are many different comic styles. So with ink, drawn or figures. But you can search here with the elements of his own story together, there are almost the picture box here.

So there are the individual pictures and then the picture details, yes that’s right. Art Speelmann, who released Raw in the USA, or he still gives out. And this is known by the comic mouse. His grandparents went under in the Holocaust. And Raw, that was then in the 80s already such an avant-garde comic magazine. He has always shown our pictures.

Here is a presentation of DeePee’s art degeneration in the Kaiser & Cream Art Space during the ZENIT exhibition. 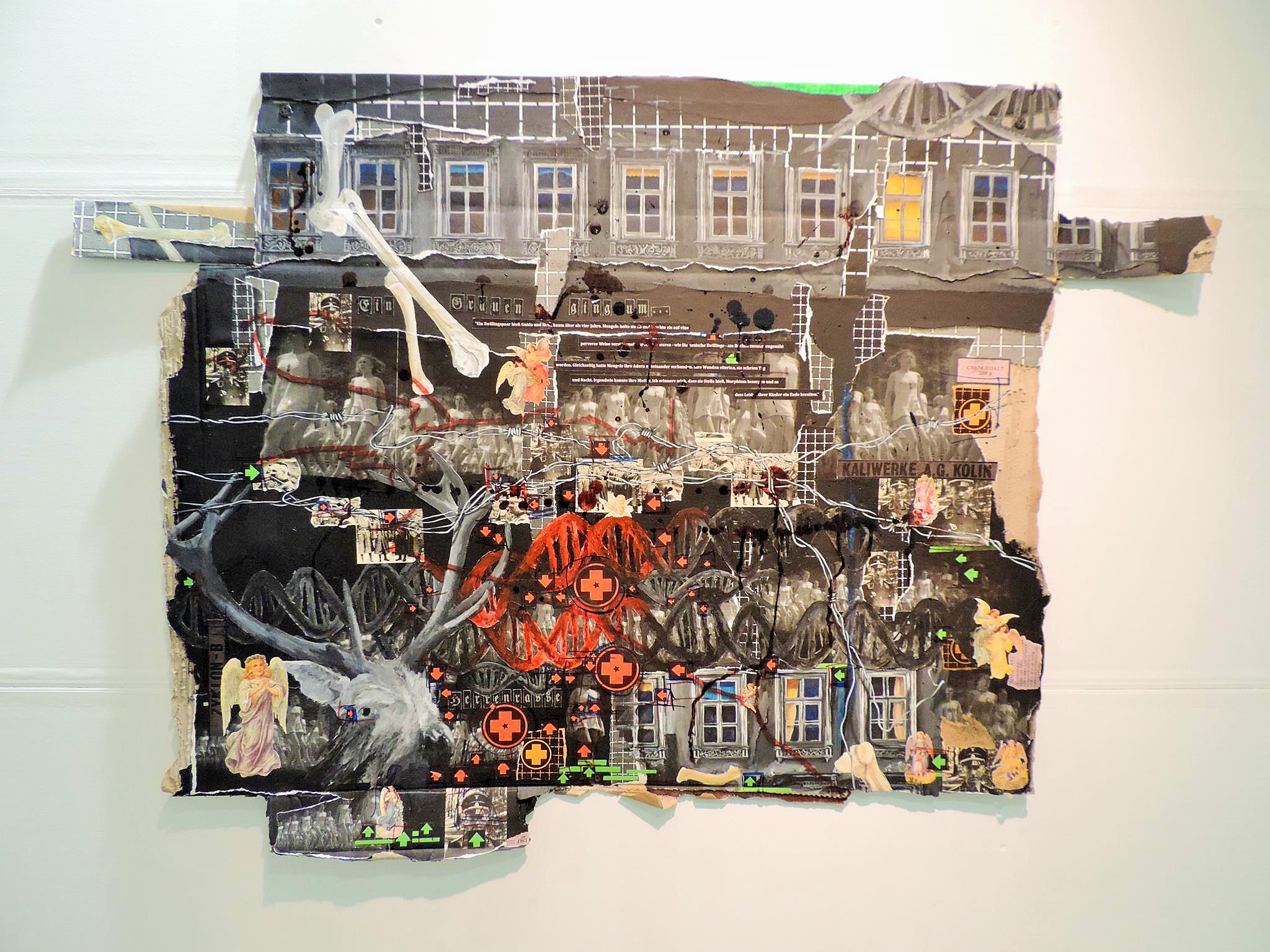