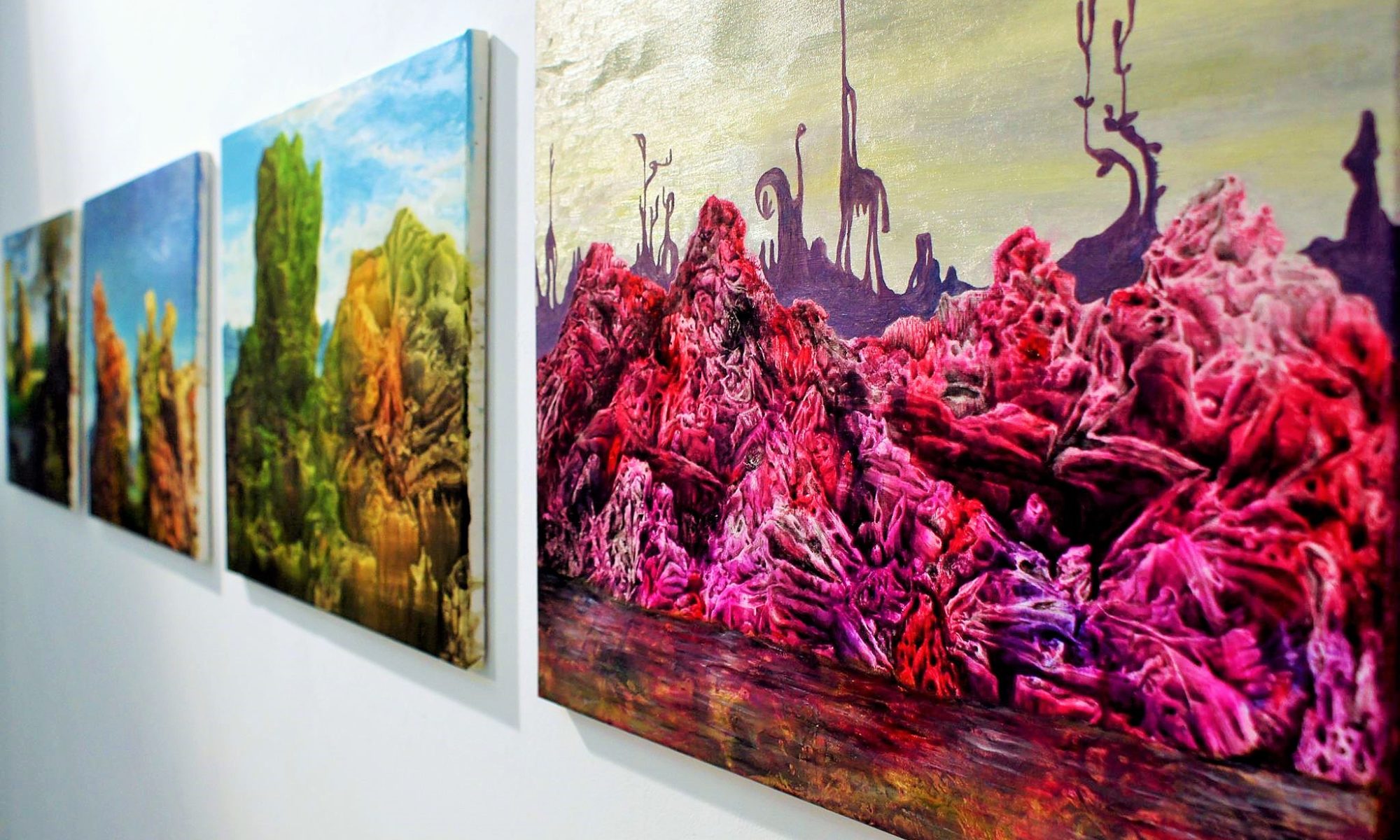 Patience and rest is the man in person. The elaboration of small details and an eye for the most minimal strokes, which then result in the combination in the big, dragon and zombies. If you admire the painting from far it looks like a peaceful oil painted landscape. If you move closer, you can see the cave entrances and the “troglodytes”. It can still be perceived only as a landscape or only as a mountain. But the way it is drawn is very much in favor of all other interpretations. A mish-mash with colour and imagination, nevertheless as an open play ball for the observer. You can stay in front of these artworks for hours and still find something new.

The roots of graffiti are unmistakable, because here and there is just one included and small embedded lettering beautify again and again the scenario. The main theme, however, must emphasize the landscape. The choice is appropriate and the surfaces offer just a simple and understandable picture. Seen from a distance, it initially comes down to this mountain-sky structure. If you take a closer look and look closer, you will see what happens in the “Troglodyte apartment”. Or you can see in the clutter just things that may be in your own “Troglodyte apartment” play. We gradually understood what “troglodytic” might mean. Are not we all a bit “troglodytic”? Everyone sees something different, according to their own thoughts on the personal current moment of life and the simultaneous perception of the outside world. Statements of visitors to an artwork during an exhibition: Person A: “Trucks on the highway from diagonally upwards” – Person B: “People dancing at a party” – Person C: “Corpse mountains” – Person D “cannot really say what it is but I’m getting hungry “.

In an interview at the exhibition Troglodytisch in the Klosterpresse in Frankfurt he told us more about his art, his technique and the wonderful extraordinary paintings. The podcast is in German but in the following you can read the written down conversation translated into English:

You mixed different styles, or rather, all of your styles together.

Exactly. It is a bit disturbed. On the one hand, that’s good, too, that I had different styles and here I really tried to merge that. The painting, the drawing, the graffiti. Because it always bothers me that such areas are totally demarcated. I have now found a way to combine that for me. And I will continue to work in that direction. I also want to do some installational stuff now, just to tie the whole thing together. 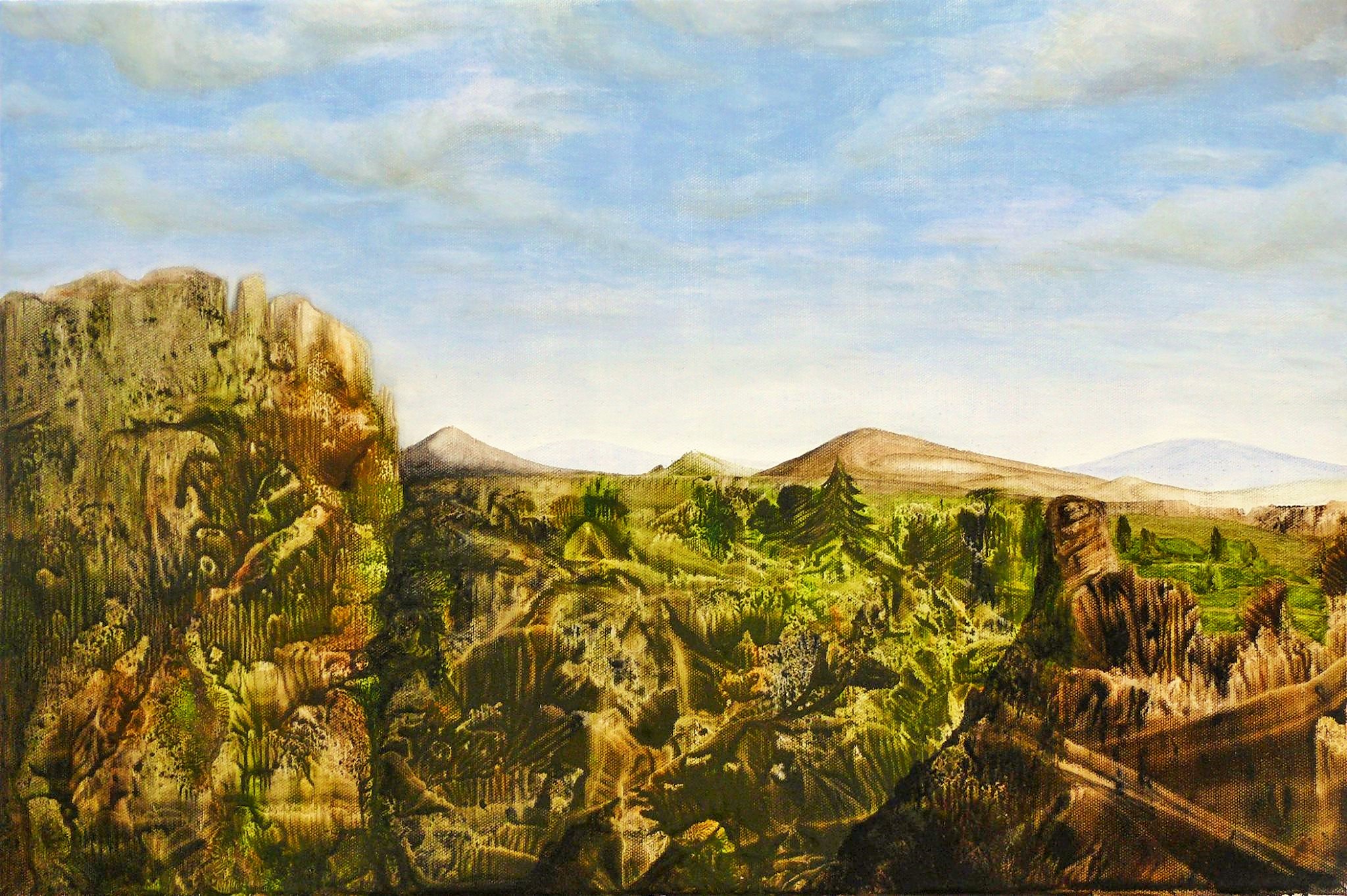 So, what you see here, these pictures, it’s something that’s grown and it’s all messed up.

Yes, it can also go in different directions.

We are here before a few works of yours, which give back your art quite well. Landscapes that then go deep and mountains that become abstract figures.

Yes, you can say that. I work with the guided coincidence. These are so Ausklatschbilder, Dekalkomanien. This forms the starting point for the pictures. You can see that here. Structures created by different methods. 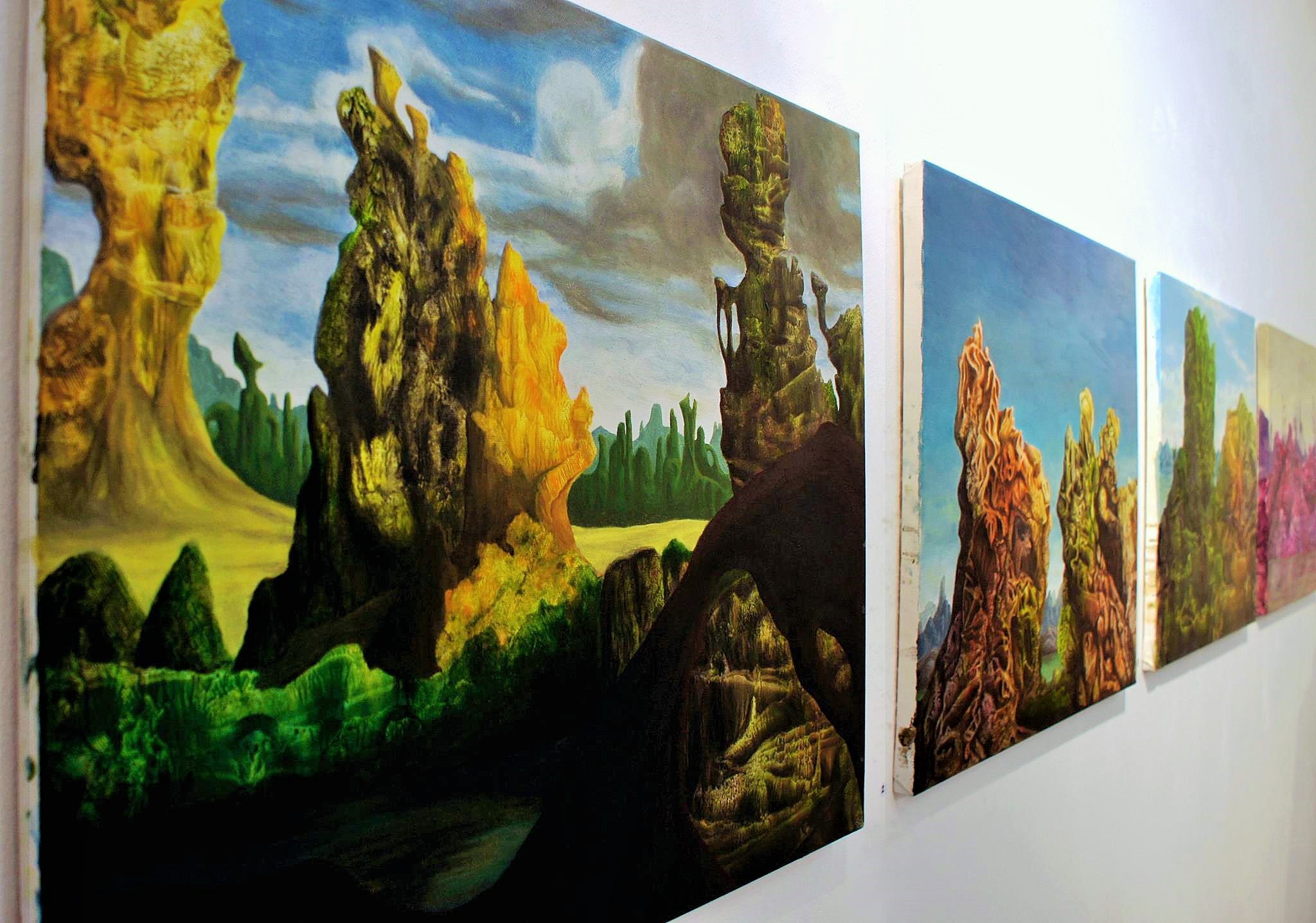 You then have a picture with color, put another on it and then take off?

Yes, you can do that with different things. That is then already designed, which colors I want. How should the rocks or structures look, so I can control that. Depending on how I deduct it and what colors I choose. So in which direction. There are also several copies, which then create different structures and I then just work out. It comes then just different topics with.

In a next step then follow the more precise contours.

Exactly, or I work out figures. This is then shaded. Or turned into a horizon with landscapes. 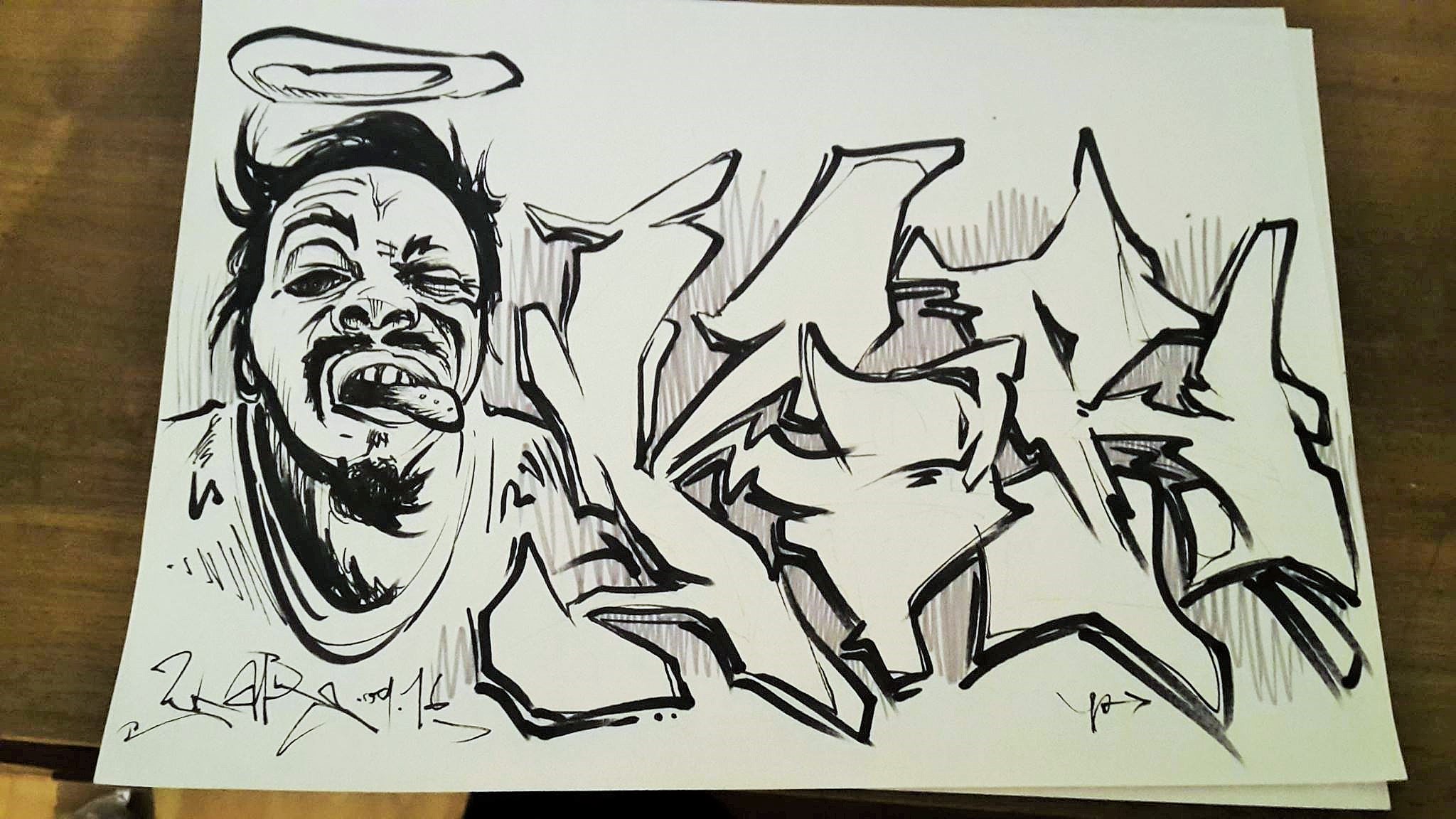 Or like here, that’s almost like a mouth and a dragon’s head. Or what you want to see.

Yes, you can. So I think there is a bit of freedom. You can also move a bit in the pictures. And I want to allow free associations as well. So that the viewer can also lose something in the picture. This is also the beauty of the process, that you really come across things that you have had in your head for a long time and that you can then expose in principle.

The three here, they are a bit older and this, you’ve made that new, there is now a color change in there with the pink. One observer said that looks like a concentration camp, another said it looked like a pile of corpses. So that’s interesting, you’ve done the same thing as the other pictures, but most of all, using different colors.

The technique is of course only one basis. What I want to convey there, then comes in. That’s basically the basis for my work, this technique and I move then also in other directions. We should actually go over to another picture now, that kind of makes up the middle piece between the older and newer things. 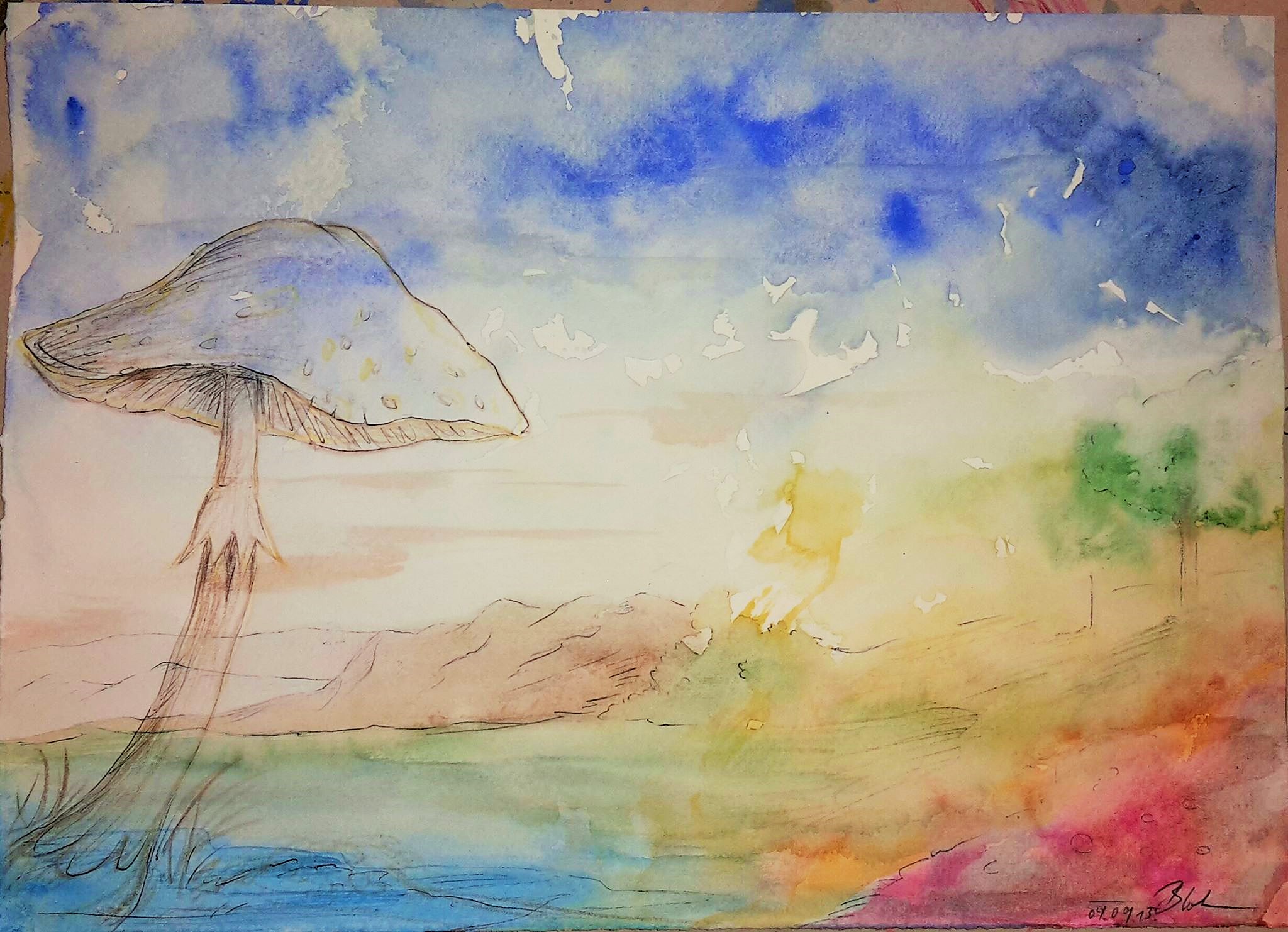 And in this part of the painting here you also have graffiti in it.

So my main thing is actually so the drawing. I just like it when you draw. Then you have a completely different line than in painting. I try to bring together the illusionistic and the ductus of the drawing. And here you can see, that gets a bit more toxic from the colors. The first pictures are very paradisiac, I say. So very illusionist and here you can see, it is rather in such a degenerate direction. You can see here, the sky could be dirty. It also reminds a bit on such chemical processes. I’m also a bit concerned with the creation itself.

I just find in this picture, how many styles you are capable of, you have connected here. With the others, you have only the gossip and the naturalistic themes, but if you look at the sky or the clouds, that’s comic style. There are also some characters in the work with it, figures and so on. But then here is the eye, that comes out of the mountains, and down here you have graffiti in it again.

The picture is called for example Alchahest. So it’s about an alchemical process. Turn different things into other things. 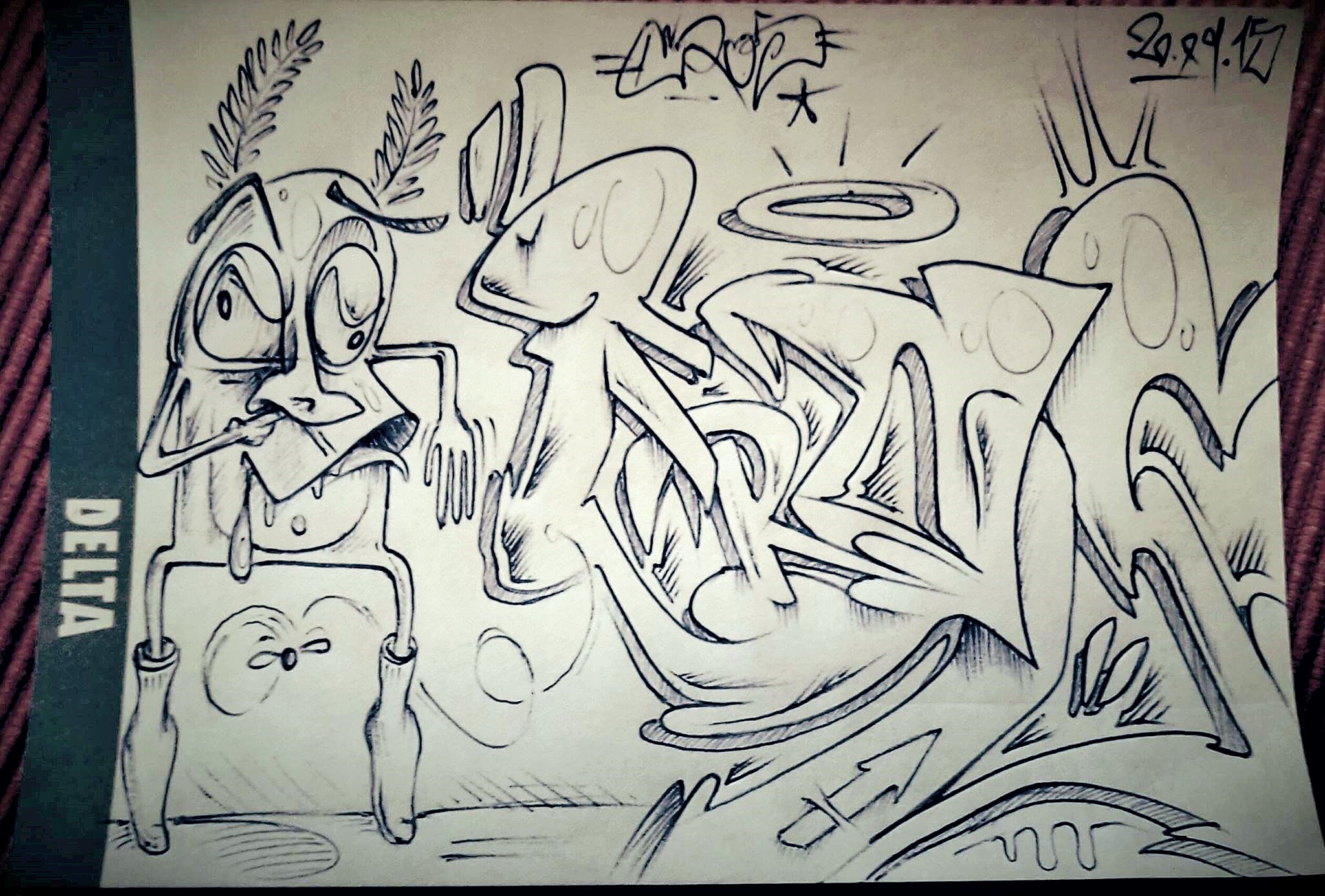 You mixed different styles, or rather, all of your styles together.

Exactly. It is a bit disturbed. On the one hand, that’s good, too, that I had different styles and here I really tried to merge that. The painting, the drawing, the graffiti. Because it always bothers me that such areas are totally demarcated. I have now found a way to combine that for me. And I will continue to work in that direction. I also want to do some installational stuff now, just to tie the whole thing together. 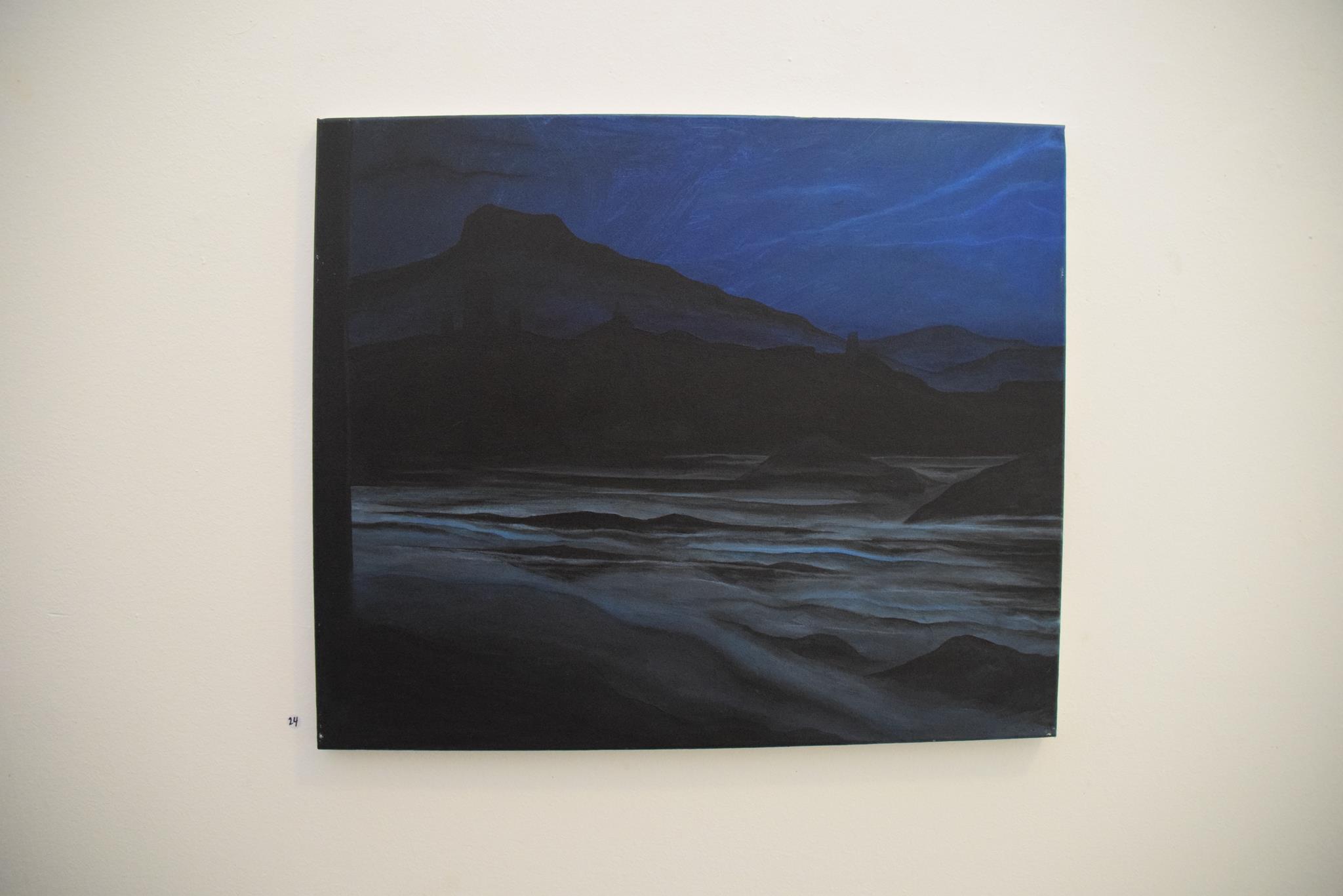 So, what you see here, these pictures, it’s something that’s grown and it’s all messed up.

Yes, it can also go in different directions. 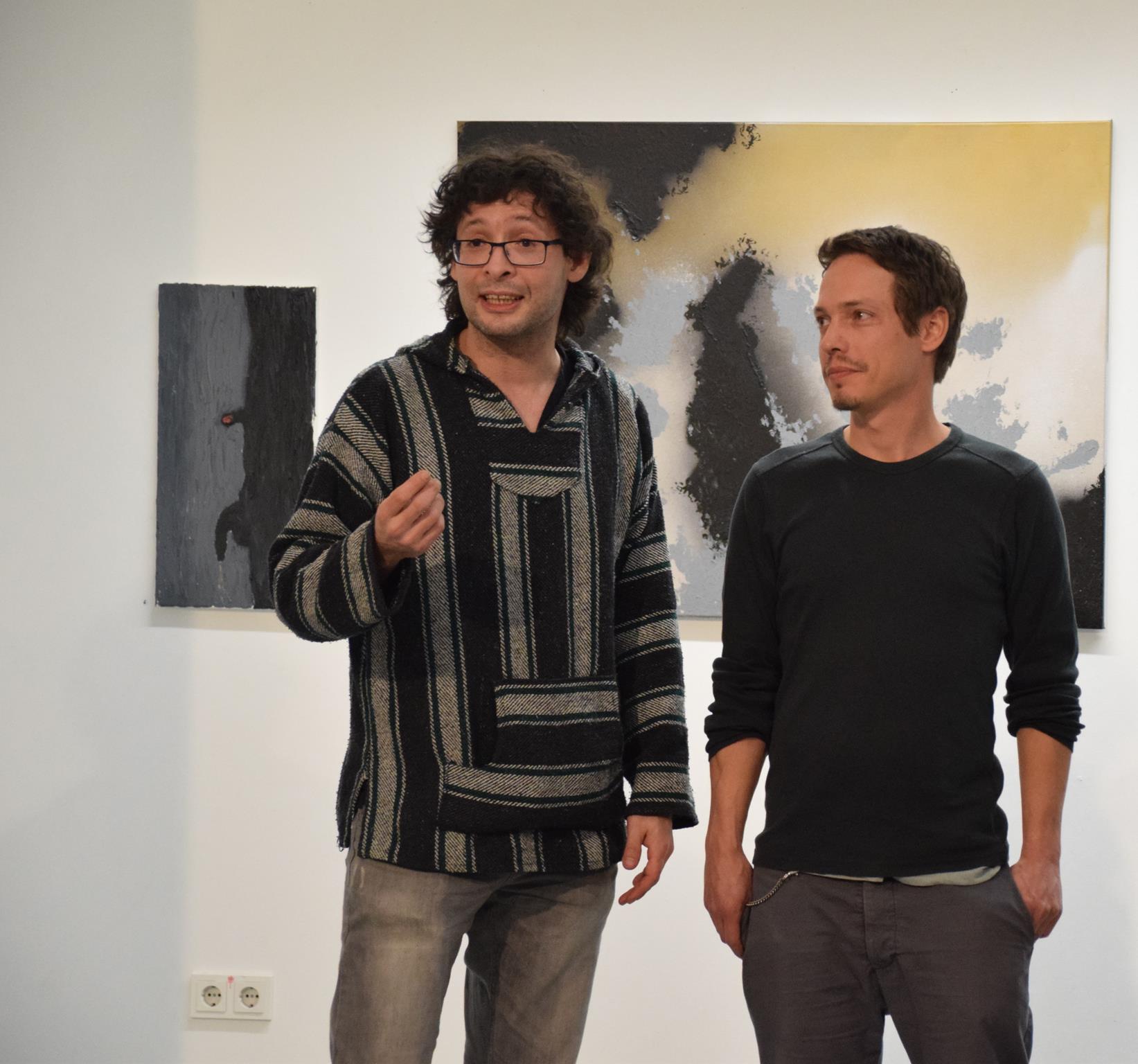 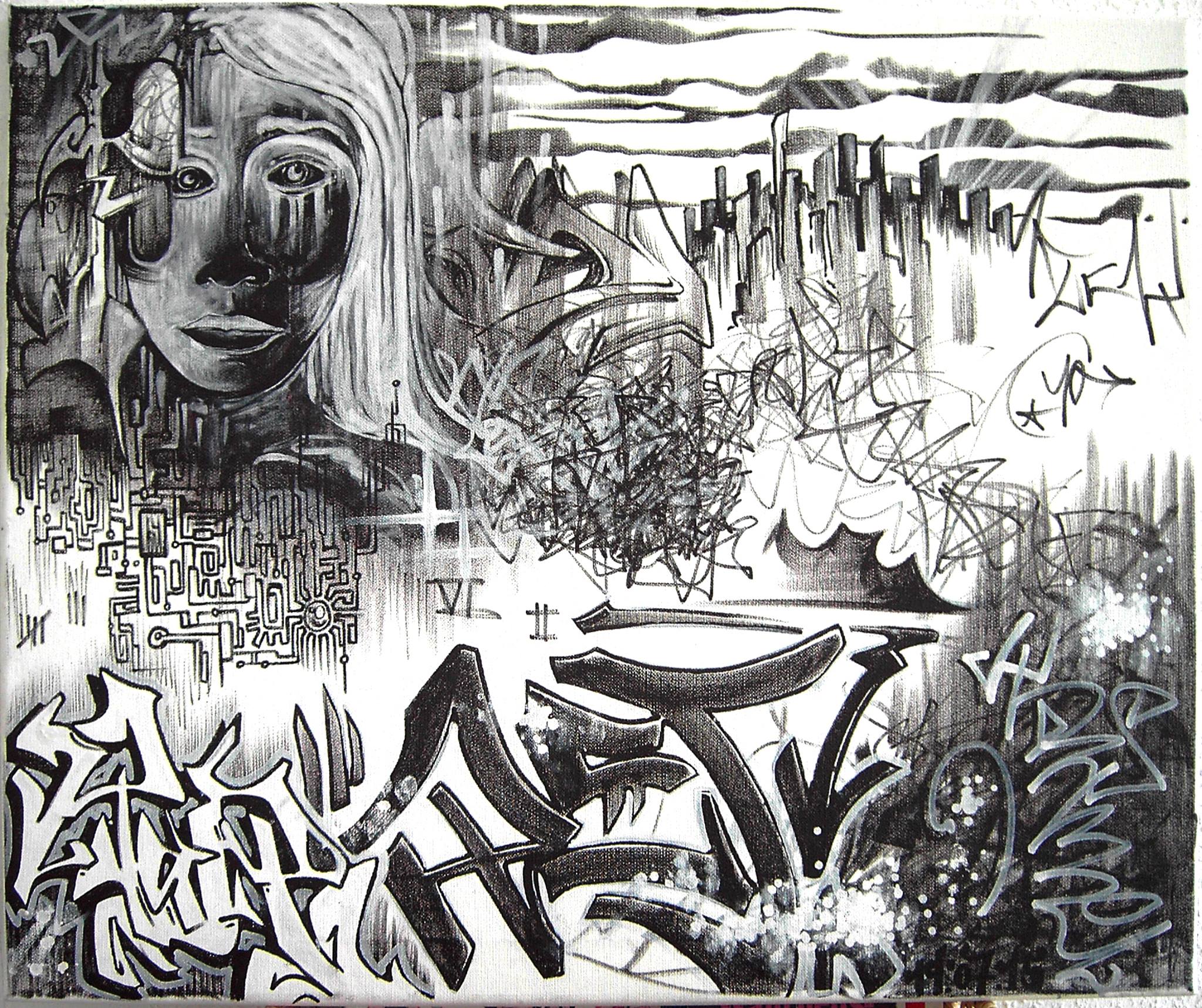